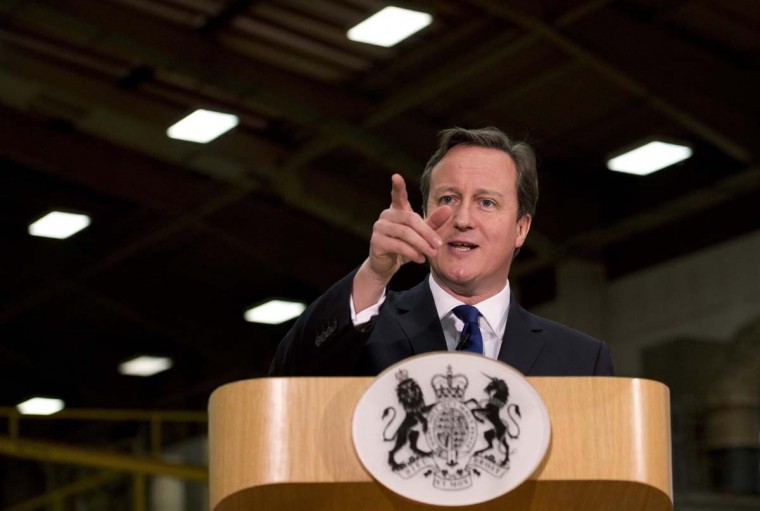 Britain’s Prime Minister David Cameron delivers a speech at JCB World Headquarters in Rocester, central England November 28. Prime Minister Cameron hinted on Friday he might recommend a British exit from the European Union if it stops him restricting EU migrants’ access to UK welfare benefits, but said he was confident it would not come to that. In a speech designed to breathe new life into his campaign for re-election next May, Cameron set out a detailed blueprint for limiting EU migrants’ access to benefits like tax credits and housing. || PHOTO CREDIT: OLI SCARFF/POOL – REUTERS 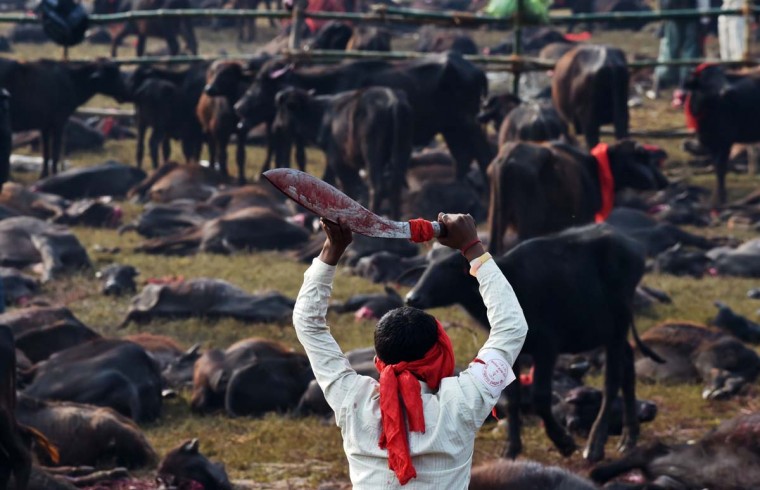 A butcher walks with a bloodied blade as he looks for an animal to kill during a mass slaughter of buffaloes for the Gadhimai festival inside a walled enclosure in the village of Bariyapur on November 27. Millions of Hindu devotees from Nepal and India migrate to the village to honour their goddess of power. The celebrations includes the slaughtering of hundreds of thousands of animals, mostly buffalo and goats. Worshippers have spent days sleeping out in the open and offering prayers to the goddess at a temple decked with flowers in preparation. || CREDIT: ROBERTO SCHMIDT – AFP/GETTY IMAGES 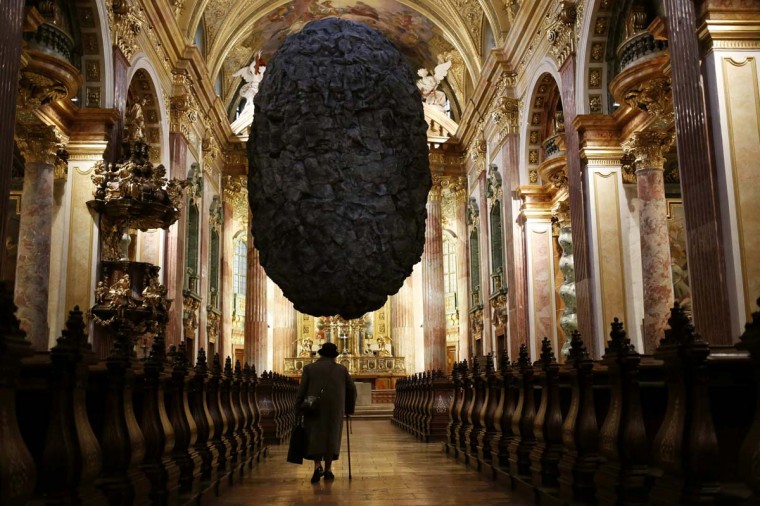 A woman walks towards the artwork “To be in Limbo” hanging from the ceiling in the Jesuit church in Vienna November 28. The sculpture, which measures eight meters (26 feet) in height and 700kg (1540lbs) in weight, was created by artist group Steinbrenner/Dempf & Huber as a homage to Rene Magritte’s floating stones. || PHOTO CREDIT: LEONHARD FOEGER – REUTERS 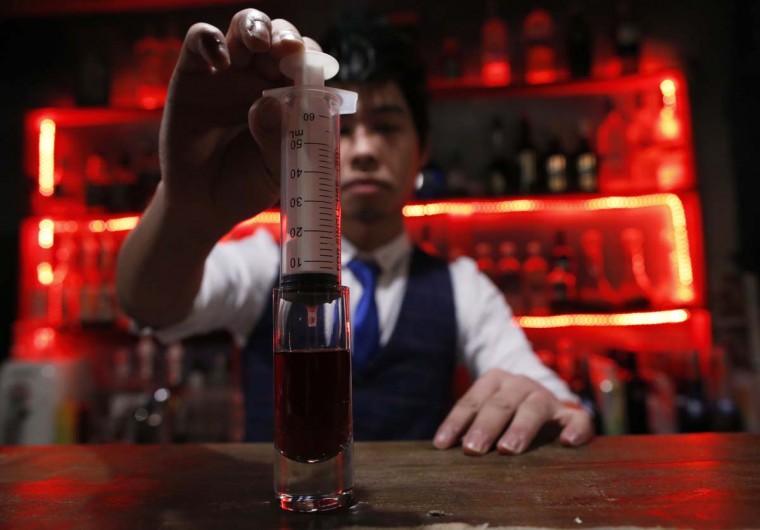 A waiter squeezes a syringe containing a cocktail into a glass at the V bar during a photo opportunity in Beijing November 28. The Vampire-themed bar serves unique foods such as a chocolate in the shape of an eyeball and cocktails in syringes and blood bags, in a place decorated like a vampire base of the Middle Ages. According to the bar, most customers are young Chinese women who are fond of watching the famous American TV series “The Vampire Diaries” . || PHOTO CREDIT: KIM KYUNG-HOON – REUTERS 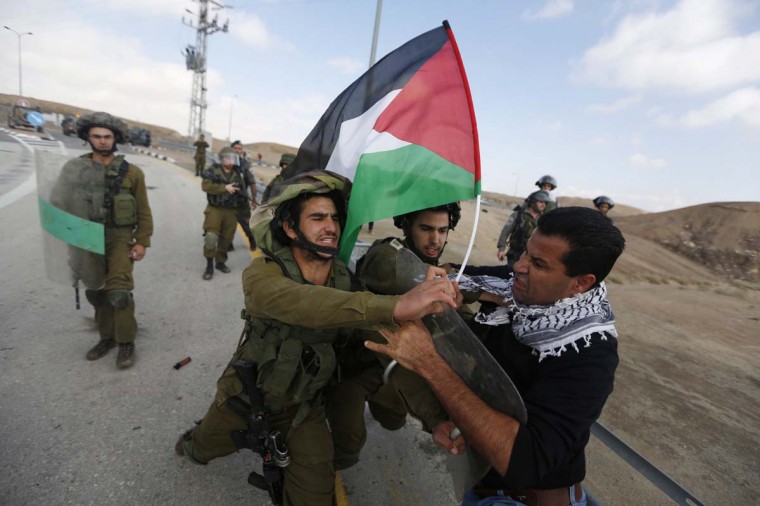 A Palestinian protester holding a Palestinian flag scuffles with Israeli soldiers during clashes following a protest against Jewish settlements, near the West Bank city of Jericho November 28. Israel’s foreign minister said this week that he supports paying Arab citizens of the country to self-segregate.|| PHOTO CREDIT: MOHAMAD TOROKMAN – REUTERS 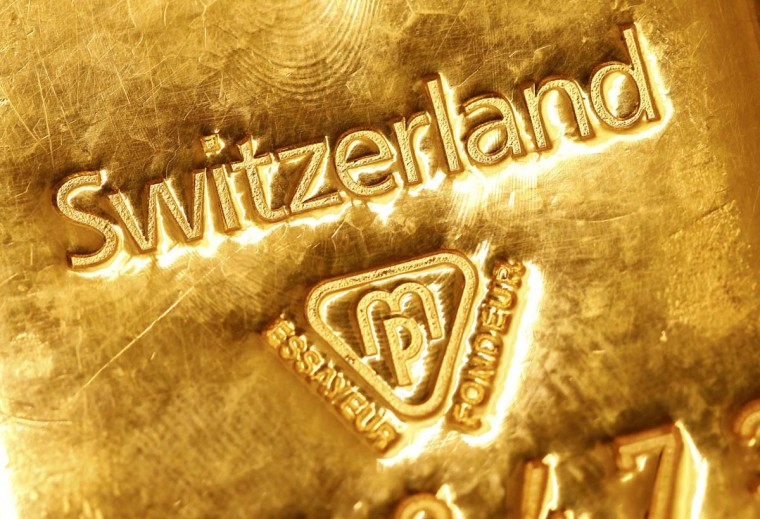 A one kilogramm gold bar imprinted with the word ‘Switzerland’ is displayed in a Swiss bank in Bern November 25. The “Save our Swiss gold” proposal, spearheaded by the right-wing Swiss People’s Party (SVP), aims to ban the central bank from offloading its reserves and oblige it to hold at least 20 percent of its assets in gold. The referendum is scheduled for November 30. The SVP argues it would secure a stable Swiss franc. Picture taken November 25, 2014. || PHOTO CREDIT: RUBEN SPRICH – REUTERS 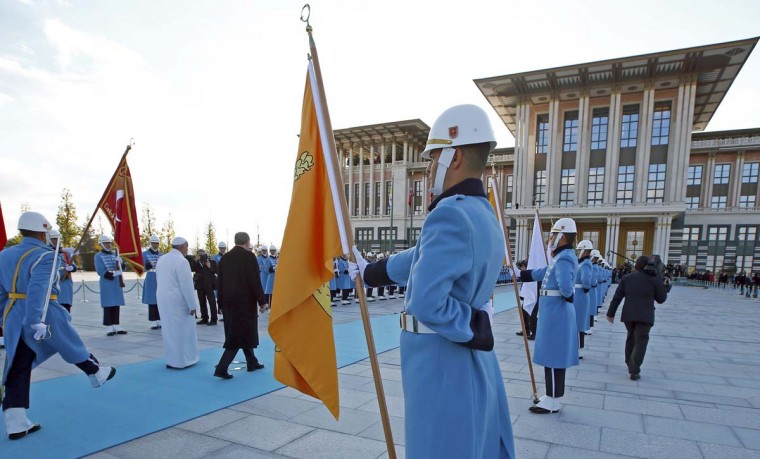 Pope Francis and Turkey’s President Tayyip Erdogan walk in front of honor guard at the presidential palace in Ankara November 28. Pope Francis begins a visit to Turkey with the delicate mission of strengthening ties with Muslim leaders while condemning violence against Christians and other minorities in the Middle East. || PHOTO CREDIT: TONY GENTILE – REUTERS 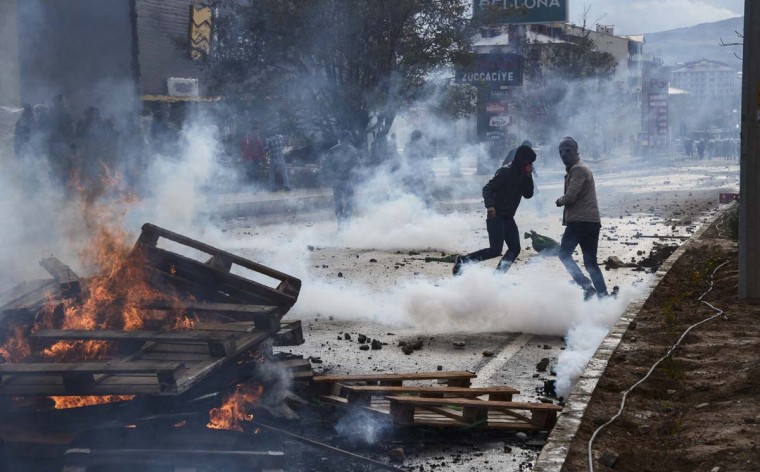 Protesters run near burning pallets as they clash with Turkish police during a demonstration by Kurdish Alawites against a visit by the leader of the Turkish opposition Nationalist Movement Party on November 28, in Tunceli. || CREDIT: ILYAS AKENGIN – AFP/GETTY IMAGES 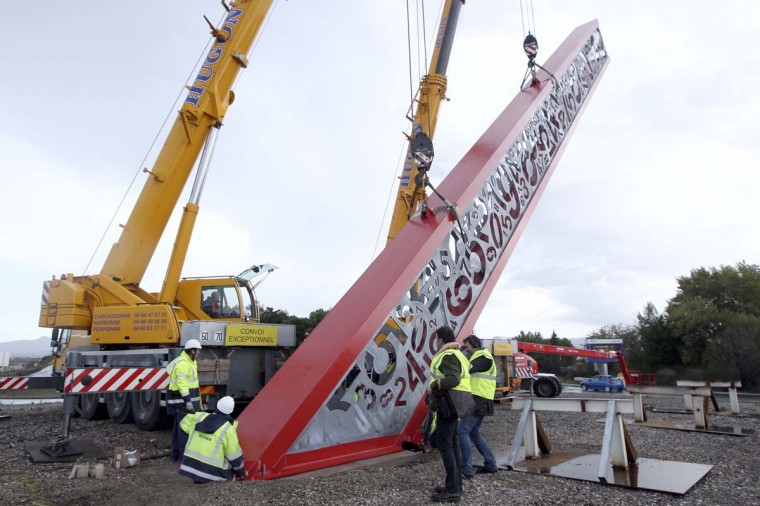 Workers install an artwork by French artist Marc-Andre 2 Figueres, Europe’s largest sun dial – 30 metres high and 35 tons – on a roundabout at the entrance of the A9 motorway in Perpignan, southern France, on November 28. ||PHOTO CREDIT: RAYMOND ROIG – AFP/Getty Images 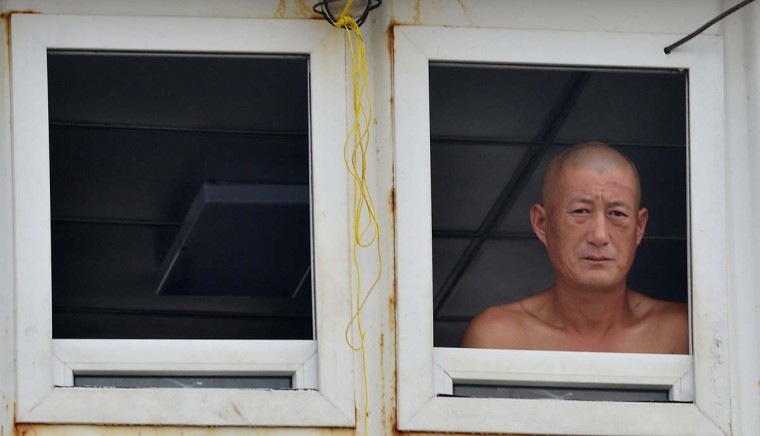 A crew member of a Chinese fishing trawler stands aboard the vessel docked at the port of Abidjan after being stopped by an Ivory Coast navy patrol and being accused of fishing illegally off the coast of the West African country on November 28. || CREDIT: ISSOUF SANOGO – AFP/GETTY IMAGES 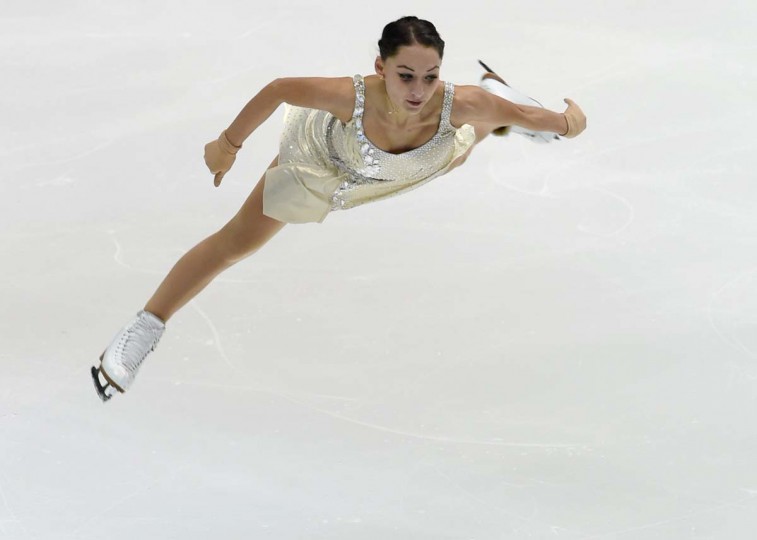 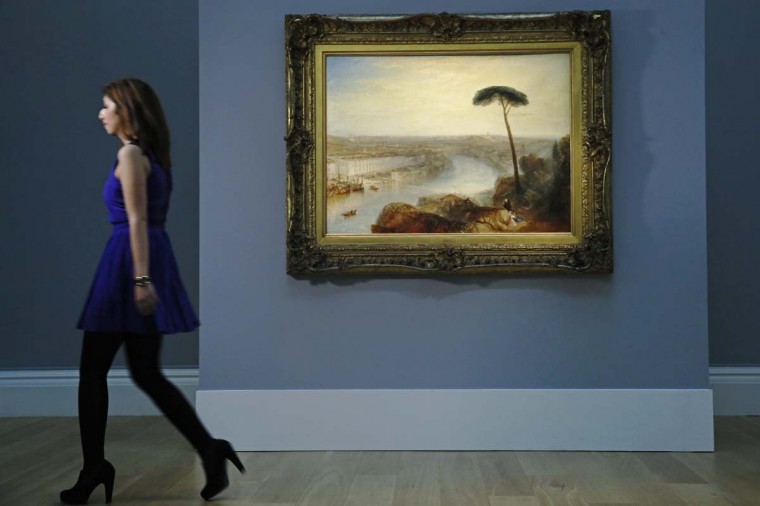 A Sotheby’s employee walks near British artist J.M.W. Turner’s artwork “Rome, from Mount Aventine” at Sotheby’s auction house in London November 28. Described by auction house Sotheby’s as one of the greatest masterpieces of British art still in private hands, Turner’s 1835 work “Rome, from Mount Aventine” is estimated to sell for 15-20 million pounds ($23.5 to 31.3 million) when it goes under the hammer on Wednesday. || PHOTO CREDIT: LUKE MACGREGOR – REUTERS 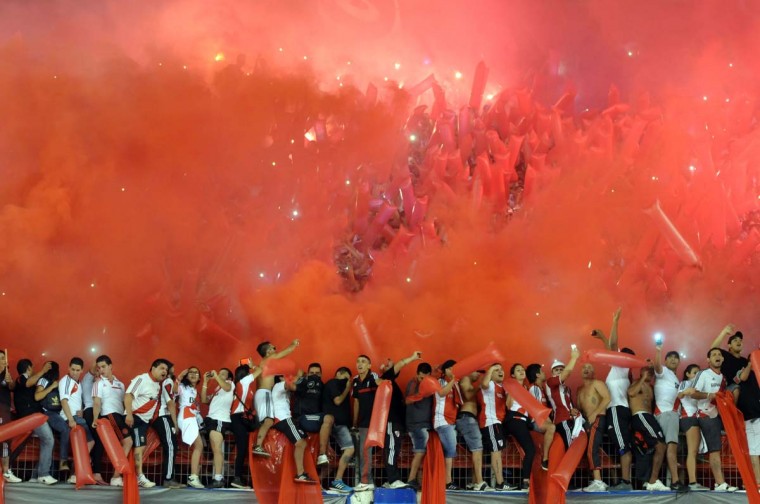 Supporters of River Plate cheer for their team before their Copa Sudamericana semifinal soccer against Boca Juniors at the Monumental stadium in Buenos Aires, Argentina, on November 27.|| CREDIT: MAXI FAILLA – AFP/GETTY IMAGES 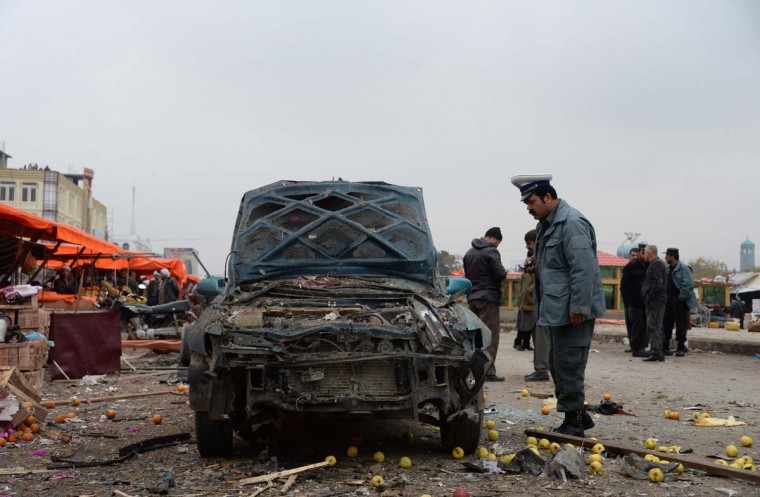 An Afghan security official inspects a damaged car at the scene of a bomb blast in Mazar-i-Sharif on November 28. At least four people were injured in the blast, officials said. || CREDIT: FARSHAD USYAN – AFP/GETTY IMAGES 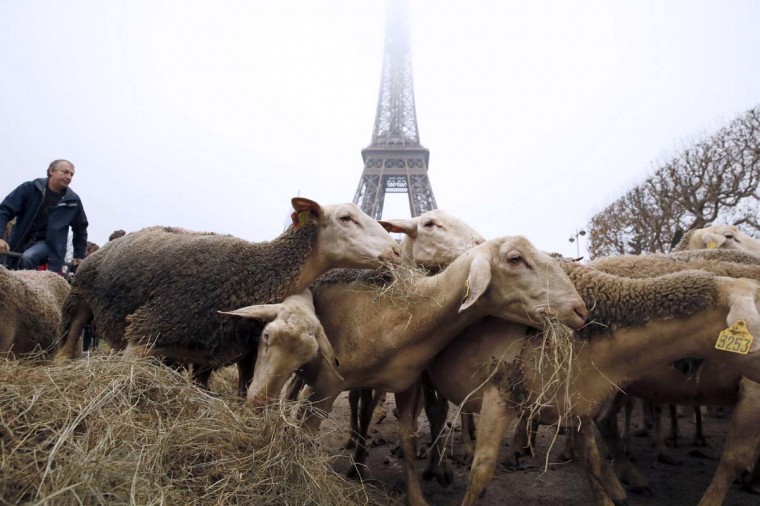 Sheep graze at the Champ de Mars near the Eiffel Tower in Paris during a protest by farmers demanding an effective plan by the ecology ministry to fight against wolves following an increasing number of attacks on flocks on November 27. || CREDIT: PATRICK KOVARIK – AFP/GETTY IMAGES