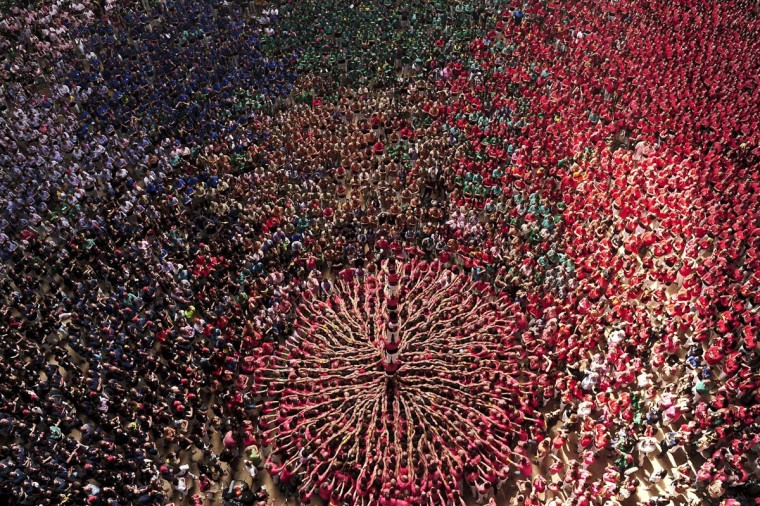 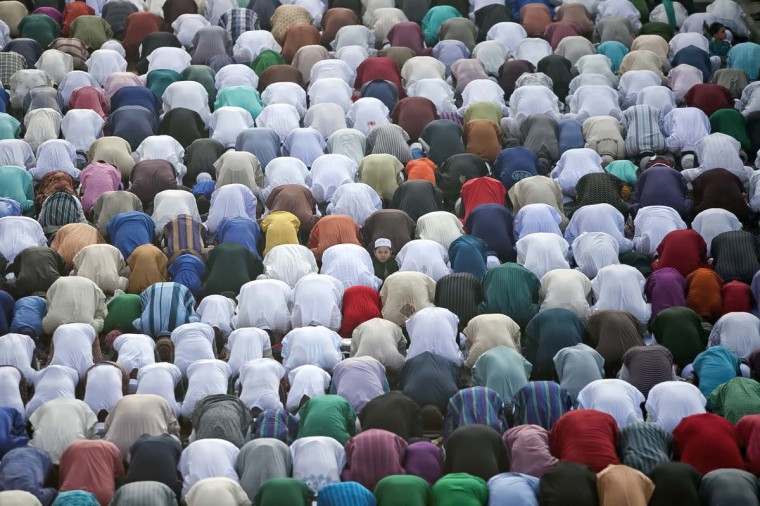 People attend prayer outside the National Mosque during the Eid-al-Adha holiday October 6, 2014 in Dhaka, Bangladesh. Eid Al-Adha, known as the ‘Feast of the Sacrifice’, is one of the most significant festivals on the Muslim calendar and lasts for four days. The holiday marks the end of the Haji Pilgrimage and serves as a day to remember the Islamic profit Ibrahim, and his willingness to sacrifice of his son, Ismail (Ishmael) as an act of submission to Allah, before Allah intervened and gave Ibrahim a lamb to slaughter in the place of his son. On this day, Muslims in countries around the world start the day with prayer and spend time with family, offer gifts and often give to charity. It is customary for Muslim families to honour Allah by sacrificing a sheep or goat and sharing the meat amongst family members. (Allison Joyce/Getty Images) 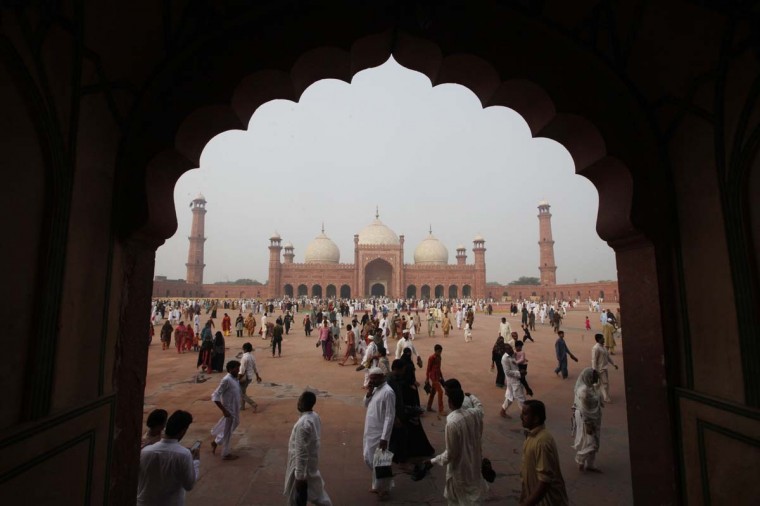 Muslims walk near the Badshahi mosque after attending a mass prayer for Eid al-Adha in Lahore October 6, 2014. Muslims across the world celebrate the annual festival of Eid al-Adha, which marks the end of the annual Haj pilgrimage, by slaughtering goats, sheep, cows and camels in commemoration of the Prophet Abraham’s readiness to sacrifice his son to show obedience to Allah. Eid al-Adha in Pakistan falls on October 6. (Mohsin Raza/Reuters) 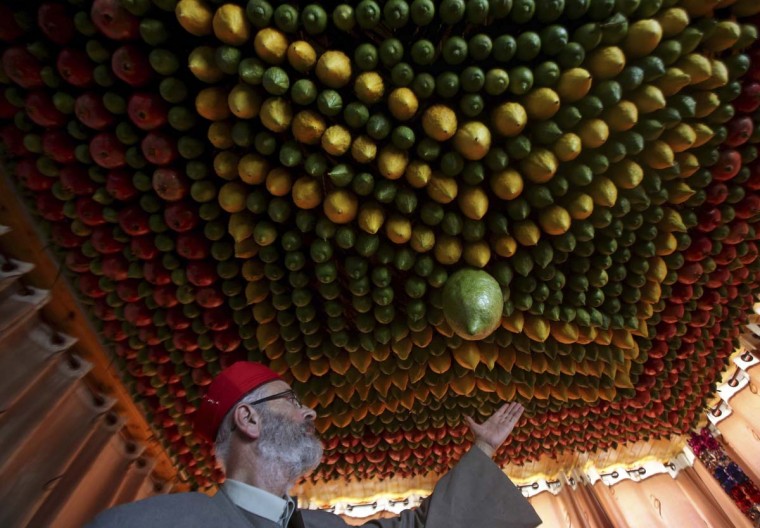 A member of the Samaritan sect decorates a traditional hut known as a sukkah with fruits and vegetables on Mount Gerizim, on the outskirts of the West Bank City of Nablus October 6, 2014. A sukkah is a ritual hut used during the week-long Jewish holiday of Sukkot which begins Monday at sundown. The Samaritans, who trace their roots to the northern Kingdom of Israel in what is now the northern West Bank, observe religious practices similar to those of Judaism. (Abed Omar Qusini/Reuters) 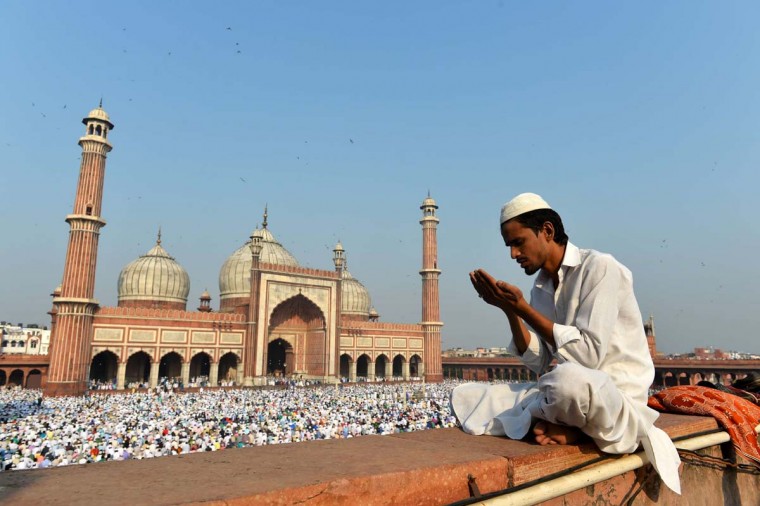 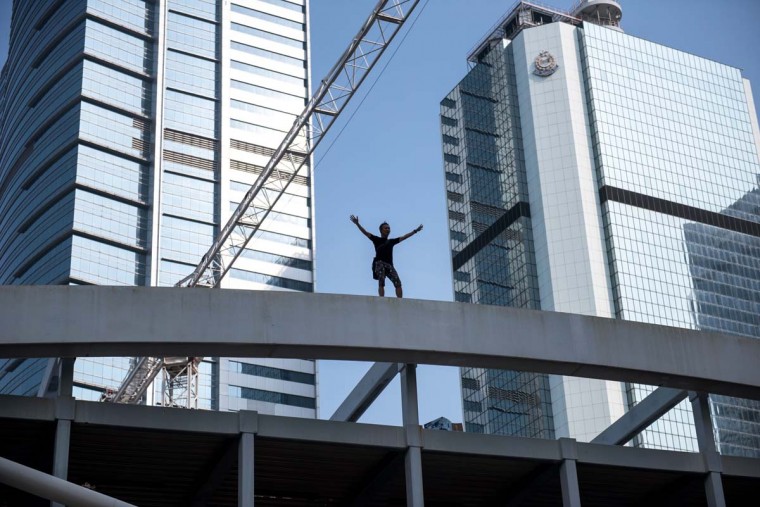 A man standing on top of a bridge overlooking a pro-democracy protest area shouts at onlookers and threatens to jump, near the central government offices in Hong Kong on October 5, 2014. Fresh clashes broke out at Hong Kong’s pro-democracy protests on October 5, with riot police using batons and pepper spray to fight back demonstrators, as student leaders reopened the door to talks with the government. (Alex Ogle/AFP/Getty Images) 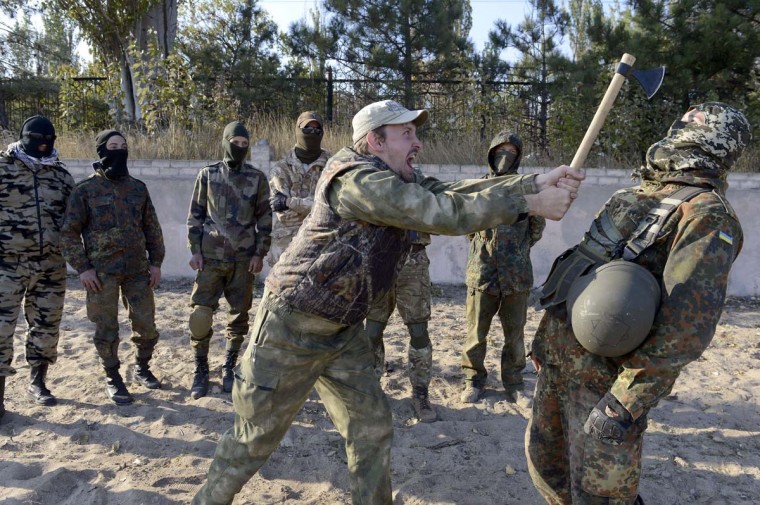 Servicemen of the pro-Ukrainian St. Maria battalion take part in military exercises near the eastern Ukrainian city of Mariupol on October 6, 2014. The first European drones landed in Ukraine and a top US envoy visited Kiev in an urgent bid to bolster its crumbling truce with pro-Russian fighters. Ukraine also announced the arrival of German winter supplies for towns and cities devastated by nearly six months of warfare that has killed nearly 3,300 people across the separatist east. (Alexander Khudoteply/AFP/Getty Images) 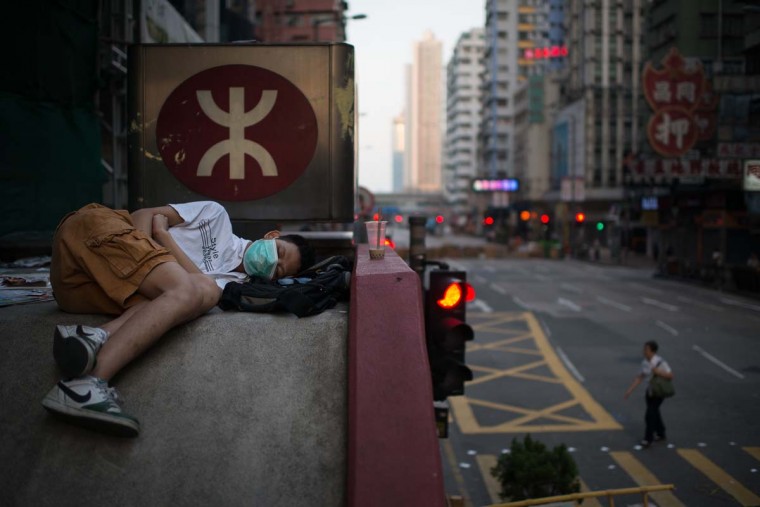 A pro-democracy protester sleeps on the roof of an MTR station as others occupy a street in the Mong Kok district of Hong Kong early on October 6, 2014. Pro-democracy demonstrators stood divided over whether to withdraw from protest sites across Hong Kong Sunday, hours before a government deadline to clear key roads they have blockaded for the last week. (Ed Jones/AFP/Getty Images) 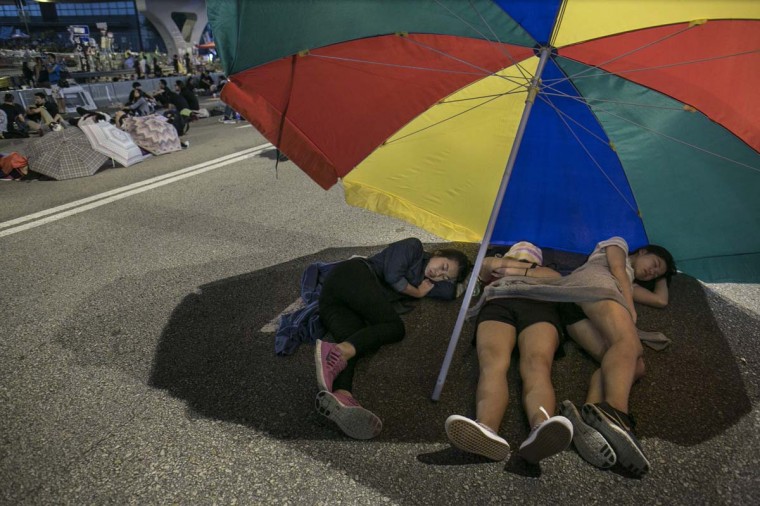 Protesters sleep overnight at the protest site as the standoff continues and authorities threaten to clear the site in the early morning hours of October 6, 2014 in Hong Kong, Hong Kong. Pro-democracy supporters continue to occupy the streets surrounding Hong Kong’s Financial district. Protesters have threatened to widen their campaign as they continue to call for open elections and the resignation of Hong Kong’s Chief Executive Leung Chun-ying. (Paula Bronstein/Getty Images) 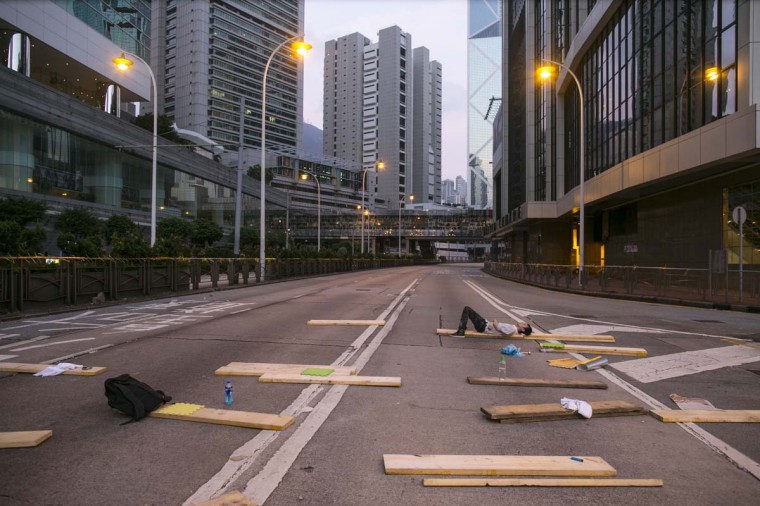 Protesters sleep on a major road adjacent to the protest site as the sun rises October 6, 2014 in Hong Kong, Hong Kong. Pro democracy supporters continue to occupy the streets surrounding Hong Kong’s Financial district. Protesters have threatened to widen their campaign as they continue to call for open elections and the resignation of Hong Kong’s Chief Executive Leung Chun-ying. (Paula Bronstein/Getty Images) 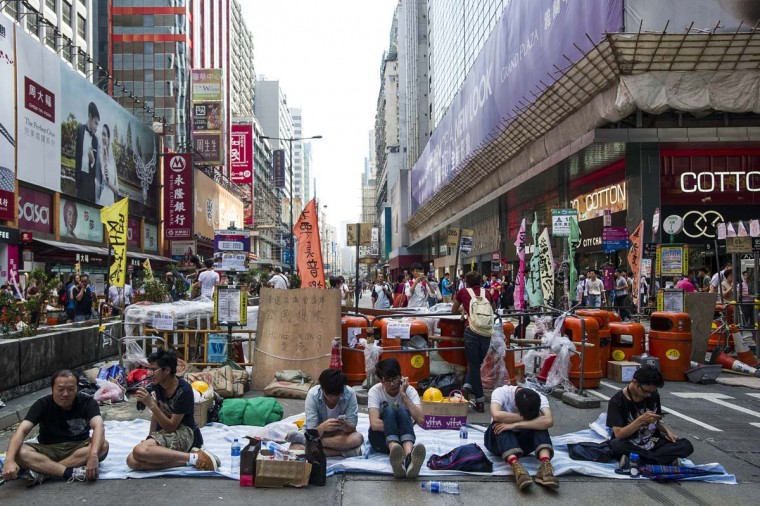 Pro-democracy protesters sit in front of a barricade in the Mongkok district of Hong Kong on October 6, 2014. Exhausted Hong Kong demonstrators debated the next step in their pro-democracy campaign on October 6 as their numbers dwindled after a week of rallies, and the city returned to work despite road closures and traffic gridlock. (Xaume Olleros/AFP/Getty Images) 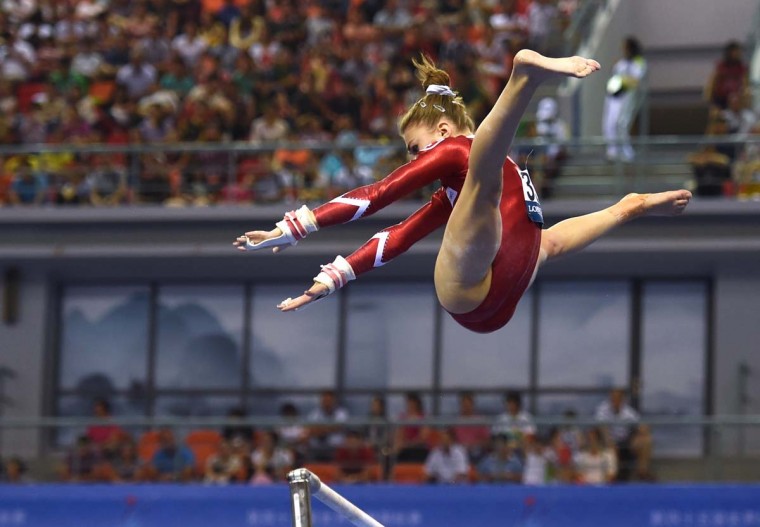 Switzerland’s Ilaria Kaeslin performs on the uneven bars during the women’s qualification at the Gymnastics World Championships in Nanning, in China’s southern Guangxi province on October 5, 2014. (Greg Baker/AFP/Getty Images) 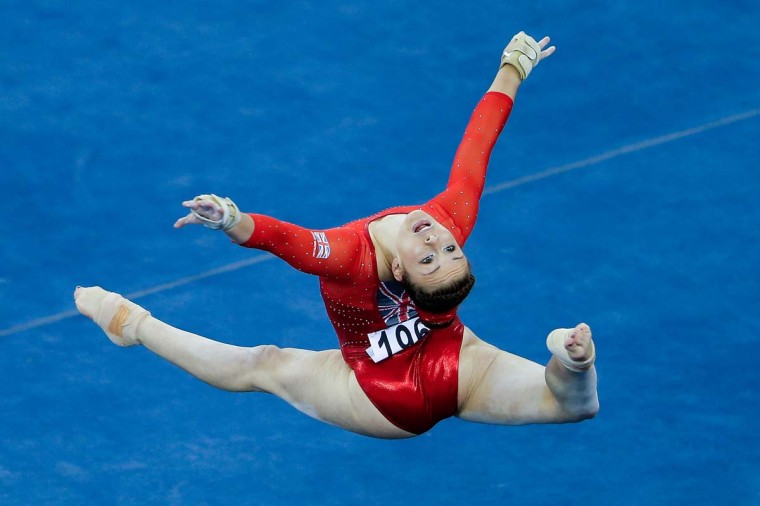 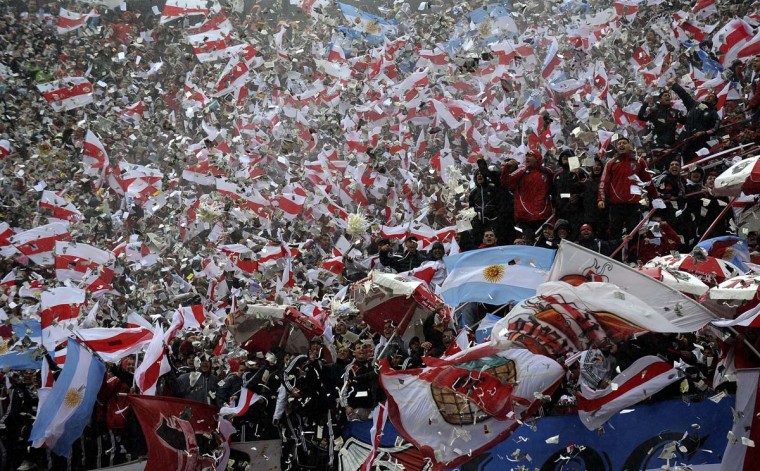 Supporters of River Plate cheer for their team before their Argentine First Division football match against Boca Juniors, at the Monumental stadium in Buenos Aires, Argentina, on October 5, 2014. (Alejandro Pagni/AFP/Getty Images) 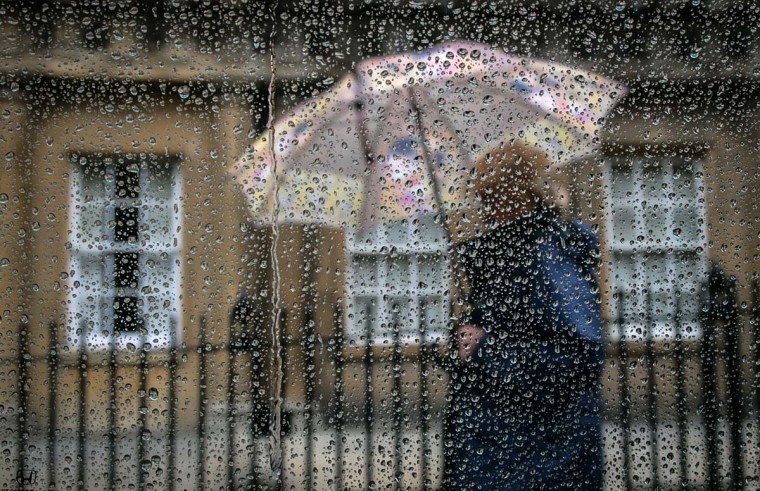 A woman passes a window covered in rain drops on October 6, 2014 in Bath, England. After one of the warmest and driest September months in recent years, the weather for October has turned much more autumnal, with a period of unsettled weather forecasted bringing much more wet and windy conditions to the UK. (Matt Cardy/Getty Images) 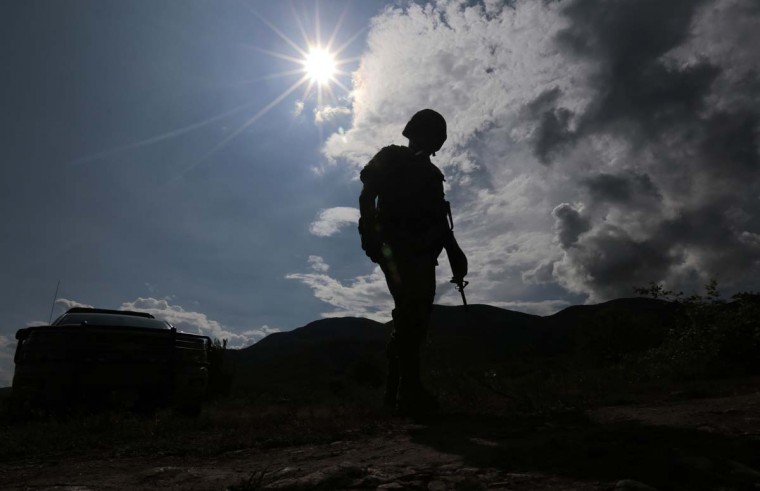 A Mexican marine stands guard at Pueblo Viejo, in the outskirts of Iguala, Guerrero state, Mexico, where a mass grave was found on October 5, 2014. At least 21 bodies were pulled from a mass grave in southern Mexico and authorities checked Sunday if they were among a group of 43 students missing since a police shooting last week. (Pedro Pardo/AFP/Getty Images)

« Best of high school sports, week of Sept. 29-Oct. 4 » Muslims around the world celebrate Eid al-Adha or the Feast of the Sacrifice