Deer in London, planning a vote in Catalonia, buying goats in Bishkek | October 3 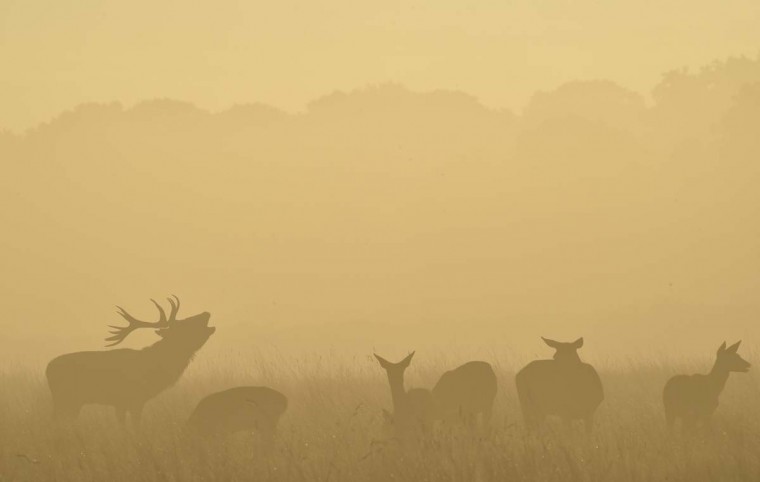 A male red deer barks in the early morning in Richmond Park in south west London, October 3. Over 600 red and fallow deer roam in the largest of London’s Royal Parks, and have their numbers managed in an annual cull each November and February. || PHOTO CREDIT: TOBY MELVILLE – REUTERS 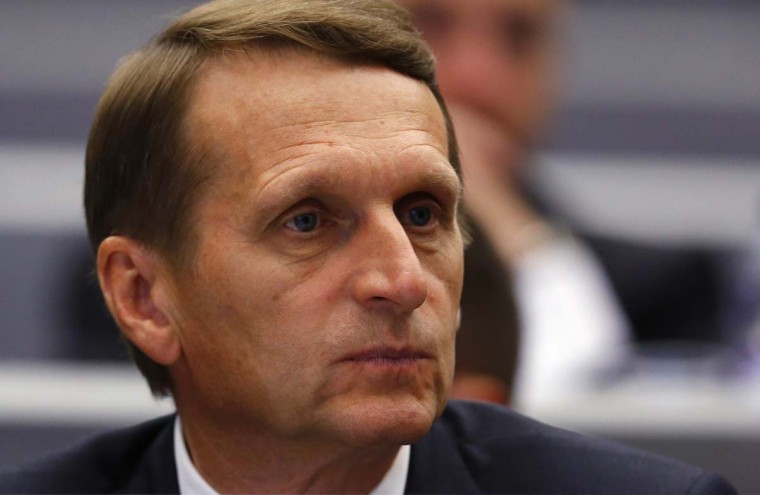 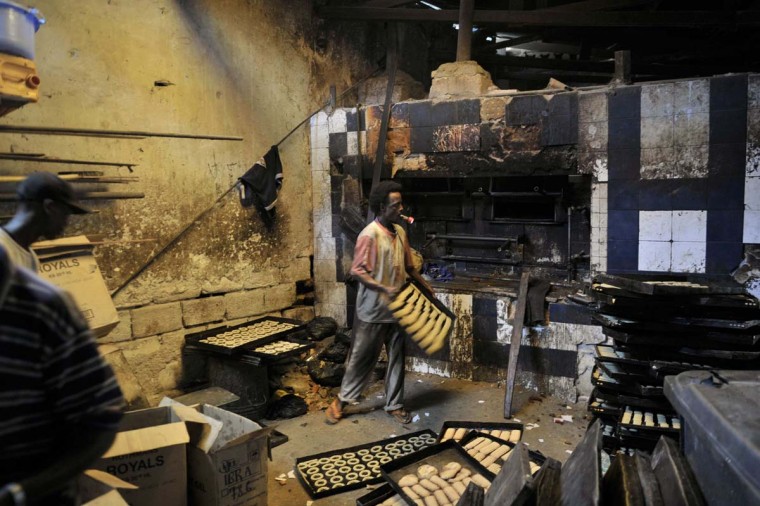 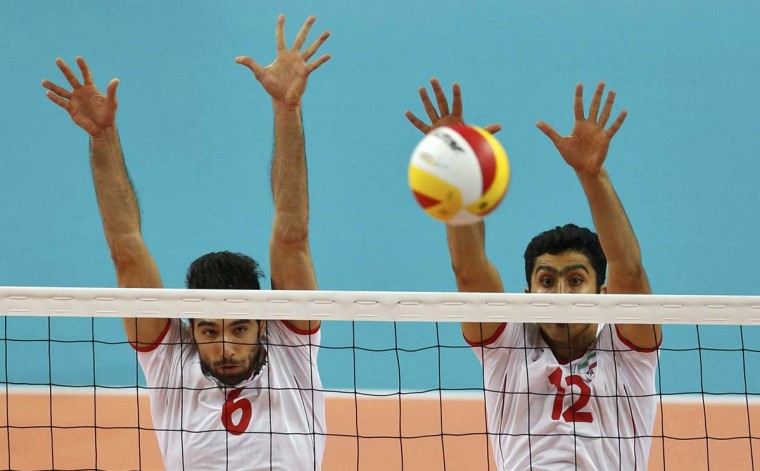 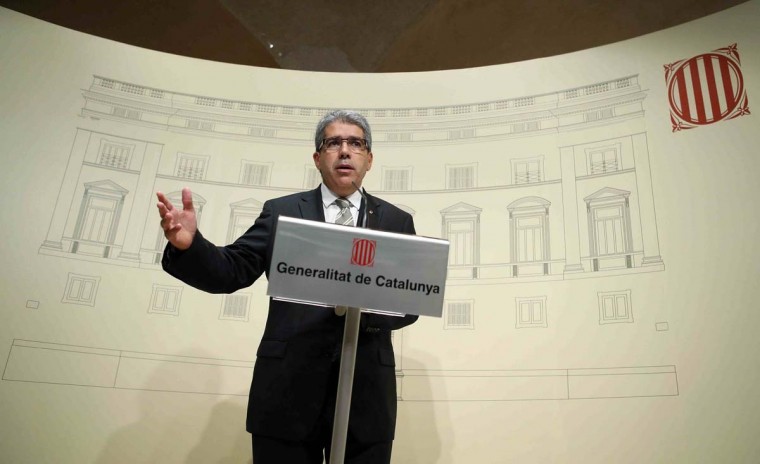 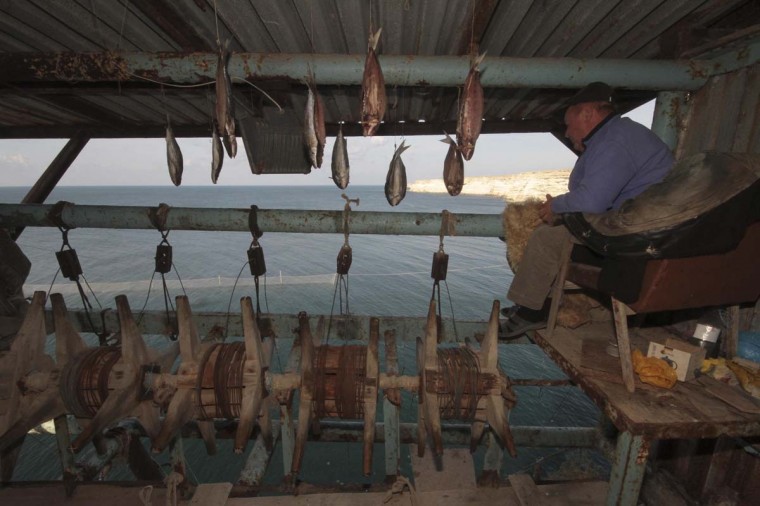 An employee of a fishing farm sits in a building with fishing net winches in the Crimean village of Olenivka, September 2. Russian wheat has made a surprise early exit from key global export markets, despite the country’s near-record crop, after domestic prices rose in the fall-out from the Ukraine crisis. Moscow in early August imposed a one-year ban on all meat, fish, dairy, fruit and vegetables from the United States, the 28 European Union countries, Canada, Australia and Norway. Picture taken September 2, 2014. || PHOTO CREDIT: PAVEL REBROV – REUTERS 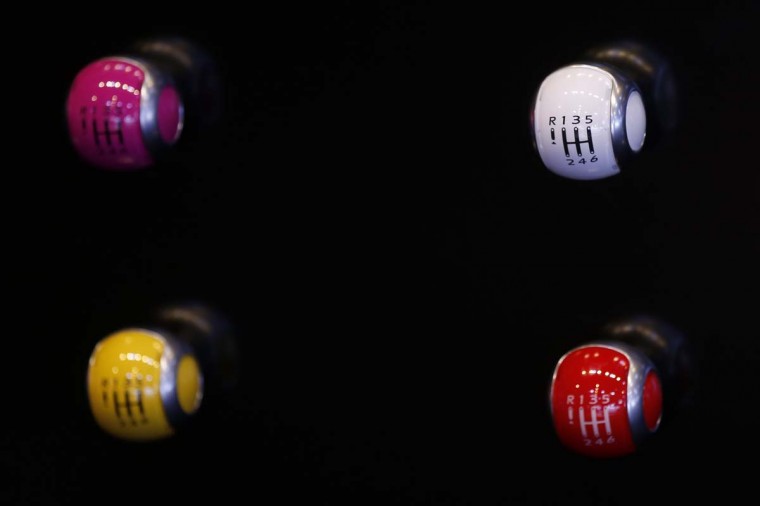 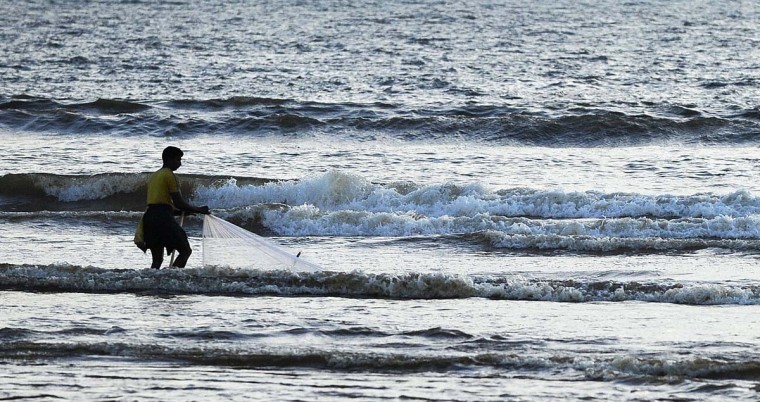 A Sri Lankan fisherman pulls a fishing net on the beach in the southern town of Galle on October 3. The International Monetary Fund noted July 2014 that Sri Lanka was one of the fastest growing economies in South Asia, but the island was also vulnerable to sudden external shocks because of high levels of foreign commercial borrowings. || CREDIT: ISHARA S. KODIKARA – AFP/GETTY IMAGES 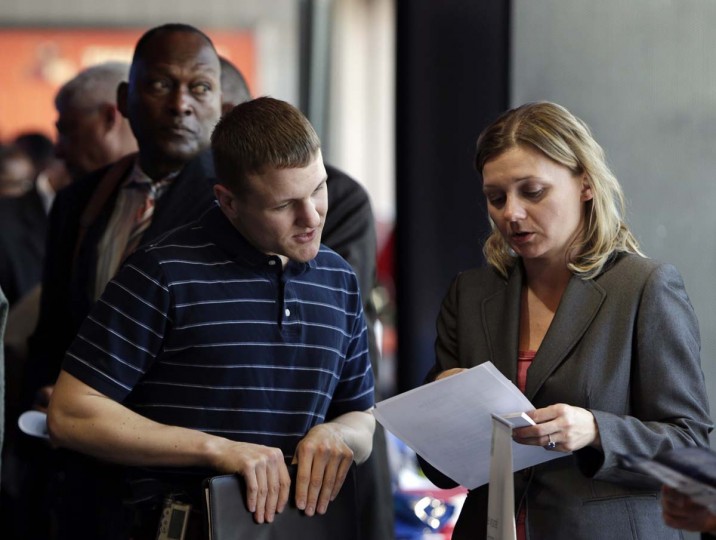 Legal firm Hogan Lovells representative Nina LeClair (R) talks to U.S. military veteran applicant Jacob Wilkens (L) at a hiring fair for veteran job seekers and military spouses at the Verizon Center in Washington in this April 9 file photo. U.S. Employers stepped up hiring in September and the jobless rate fell to a six-year low, which could bolster bets on a Federal Reserve rate hike in mid-2015 or even earlier. || PHOTO CREDIT: GARY CAMERON/FILES – REUTERS 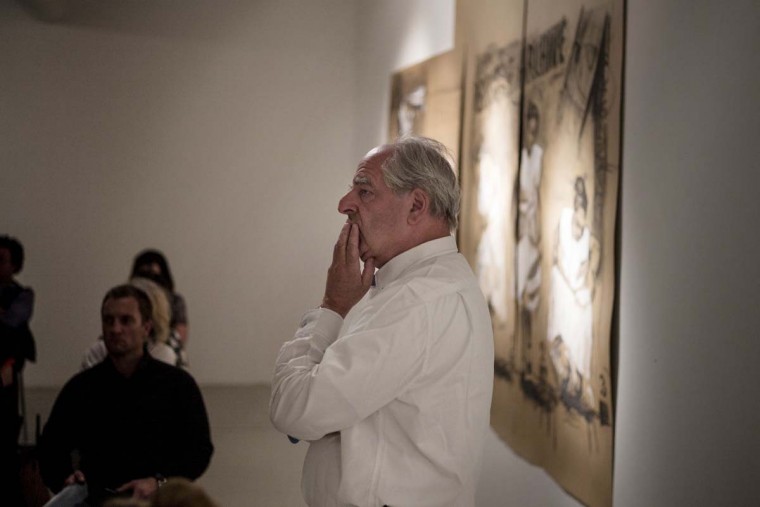 South African artist and Kyoto Prize 2010 recipient William Kentridge poses in front of some of his drawings during a public appearance at an art gallery in Johannesburg on October 3. Kentridge, 59, introduced today a new body of work consisting of drawings of landscapes from the East Rand. This series is collected in a book called “Accounts and Drawings from the Underground” will be presented in Johannesburg on November 15. || CREDIT: MARCO LONGARI – AFP/GETTY IMAGES 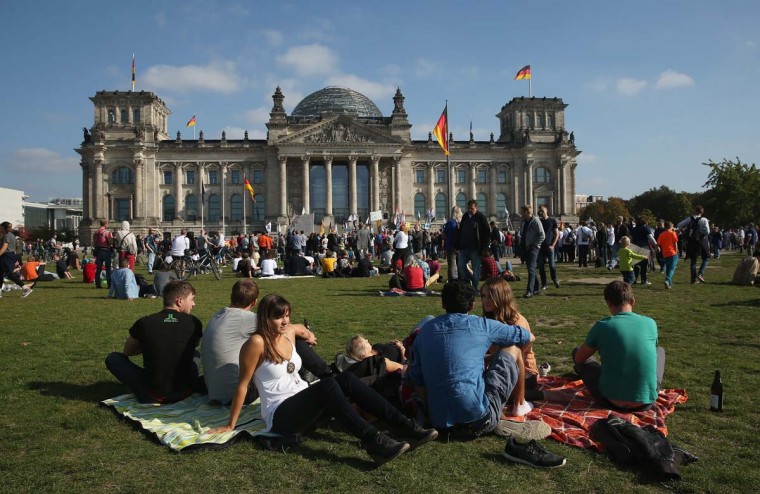 People relay on the lawn infront of the Reichstag on German Unity Day (Tag der Deutschen Einheit) on October 3 in Berlin, Germany. Germany is celebrating the 24th anniversary of the day when former West Germany and East Germany reunited into modern Germany in 1990 following the end of the Cold War. As the now-unified Germany prepares to celebrate 25 years since the days of the Berlin Wall and the infamous Stasi, the federal government there continues to be wary of U.S. spying and surveillance practices. ||Photo by Sean Gallup/Getty Images 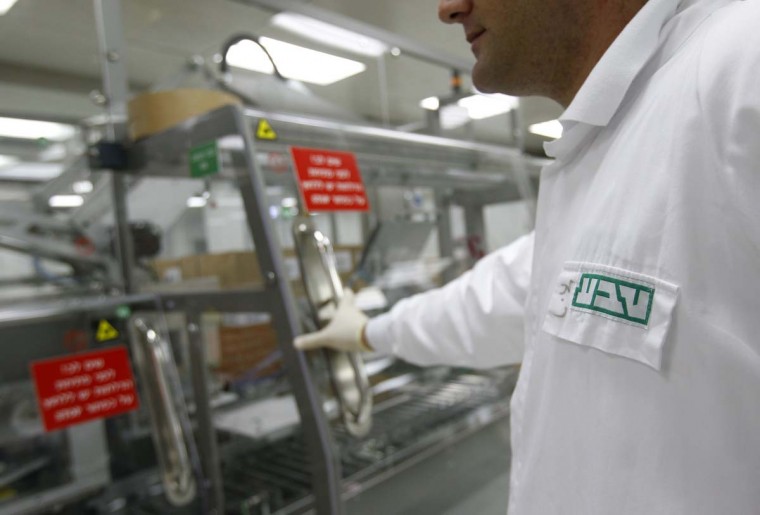 An employee of Teva Pharmaceutical Industries wears a shirt bearing the company’s logo at its Jerusalem oral solid dosage plant (OSD) in this December 21, 2011 file photo. U.S. Supreme Court justices will tackle a host of business cases as they convene for their new term, including a patent battle involving Teva Pharmaceutical Industries Ltd. The court on October 6, 2014 opens its term, which ends in June. The Teva case, a showdown between the Israeli company and generic rivals over a patent for the lucrative multiple sclerosis drug Copaxone, is one of the first business cases the justices will hear, with oral arguments on October 15. || PHOTO CREDIT: RONEN ZVULUN/FILES – REUTERS 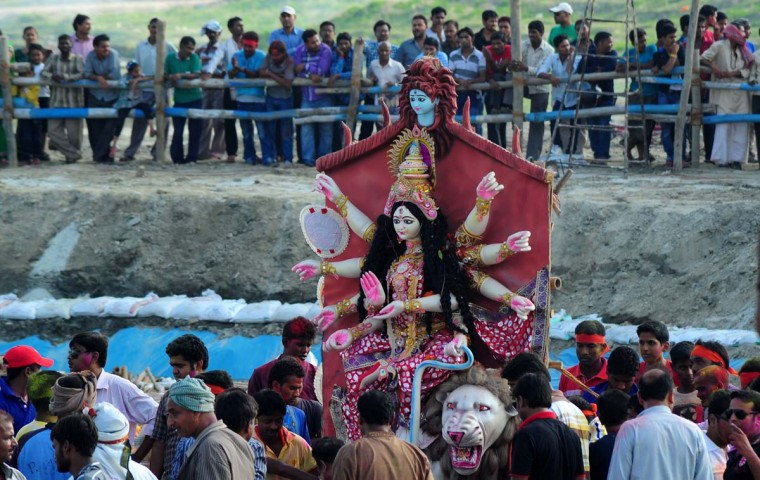 Hindu devotees carry an idol of goddess Durga to be immersed in a temporary pond near Sangam as part of the Durga Puja festival in Allahabad on October 3. Durga Puja commemorates the slaying of demon king Mahishasur by goddess Durga, marking the triumph of good over evil. || CREDIT: SANJAY KANOJIA – AFP/GETTY IMAGES 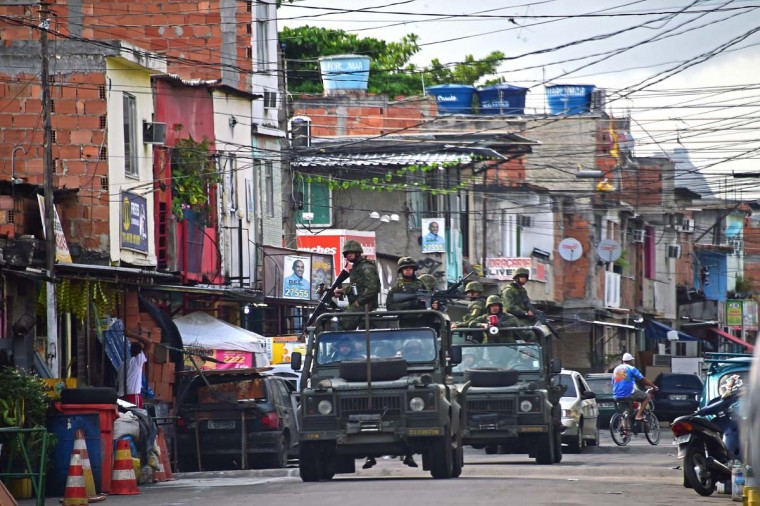 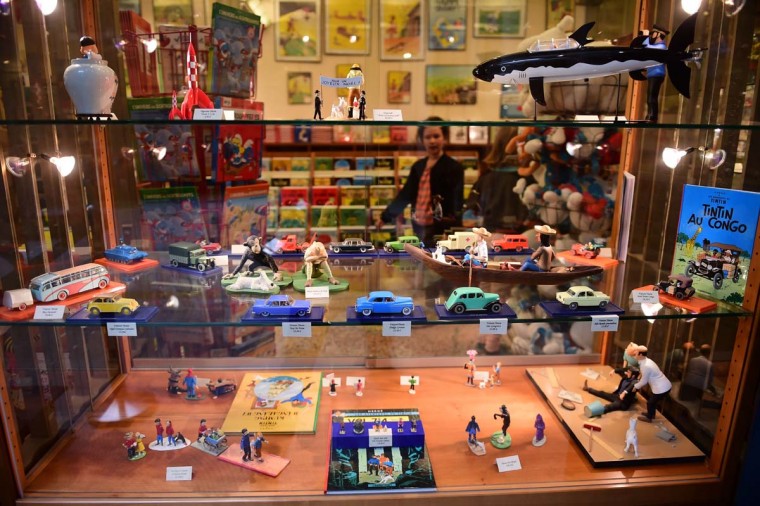 Figurines from Belgian cartoonist Herge’s work (pen name of Georges Remi), are displayed in the “Centre Belge de la Bande Dessinee” (Belgian Comic Strip Center) on October 3 in Brussels, as it marks its 25th anniversary. The museum, one of the largest worldwide dedicated to comic strip art, marks its 25th anniversary with a series of special exhibitions and happenings. || CREDIT: EMMANUEL DUNAND – AFP/GETTY IMAGES 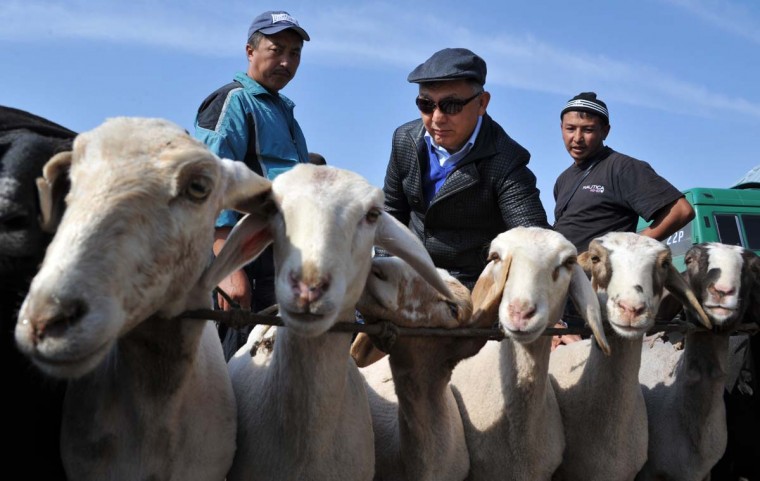 A Kyrgyz customer checks sheep at the outdoors livestock market in Bishkek on October 3 on the eve of the Muslim Eid al-Adha festival, the Muslim feast of sacrifice, known locally as Kurban Bayram. || CREDIT: VYACHESLAV OSELEDKO – AFP/GETTY IMAGES 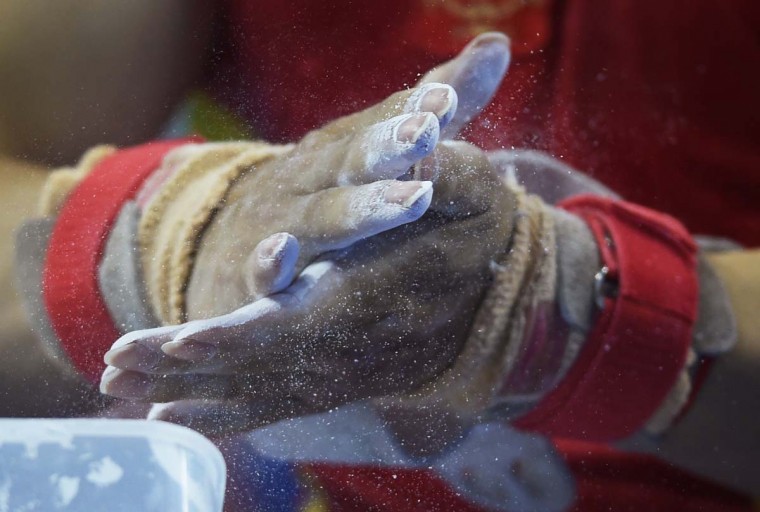 China’s Liu Yang rubs powder into his hands before performing on the rings during the men’s qualification at the Gymnastics World Championships in Nanning, in China’s southern Guangxi province on October 3. || CREDIT: GREG BAKER – AFP/GETTY IMAGES 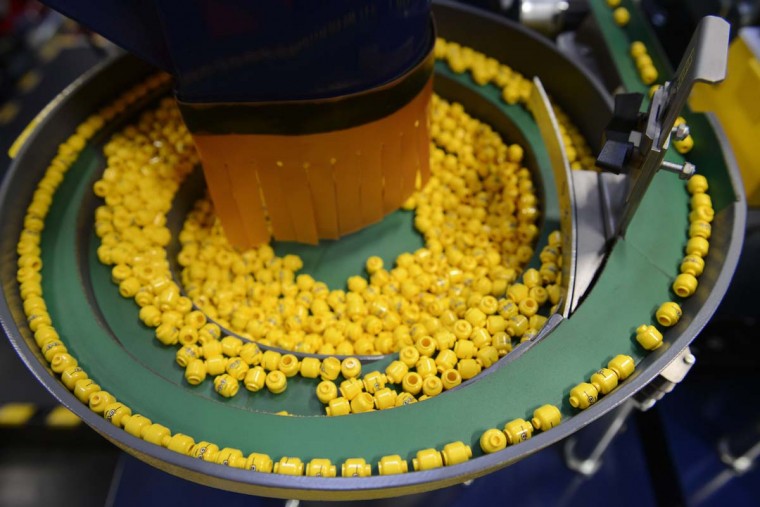 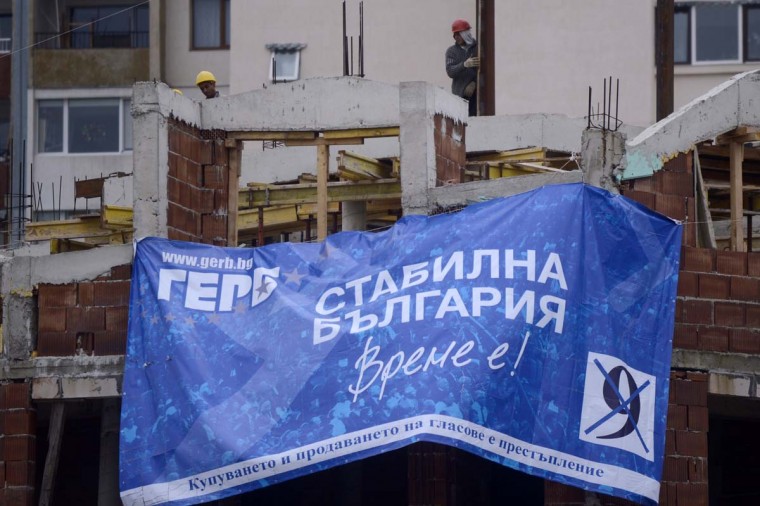 A Bulgarian conservative GERB party banner, reading: ”Stable Bulgaria”, is attached at the front of a construction site in Sofia on October 3. Bulgarians vote on October 5 to elect a new government after almost two years of political instability that has undermined voter trust and shaken the economy of the poorest EU country. Ex-communist Bulgaria’s second snap election in 17 months takes place in a country where the average monthly salary is stuck at 400 euros ($504) and where corruption and organized crime are rife. || CREDIT: NIKOLAY DOYCHINOV – AFP/GETTY IMAGES 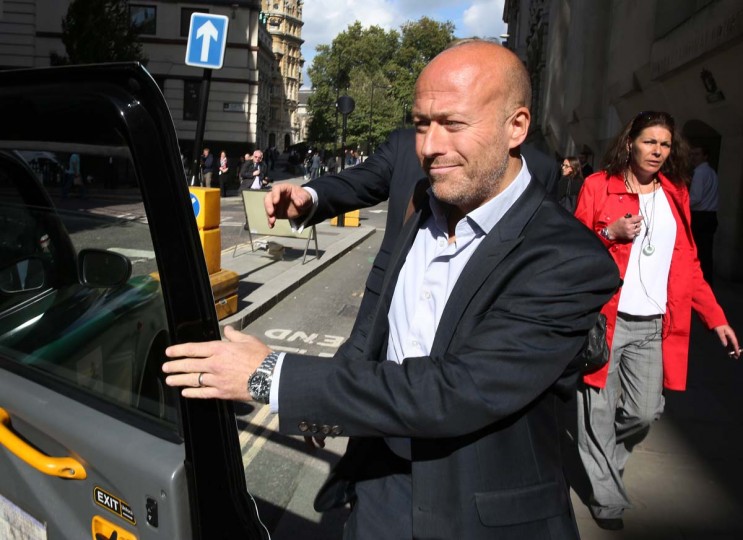 Former News of the World news editor Ian Edmondson leaves the Old Bailey on October 3 in London, England. Mr Edmondson has pleaded guilty to plotting to hack telephones in his time at the now closed tabloid newspaper. ||Photo by Peter Macdiarmid/Getty Images 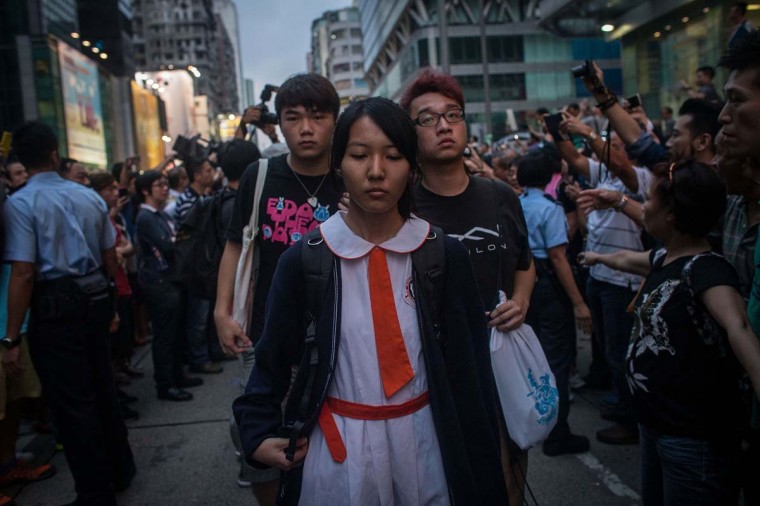 Students and pro-democracy activists leave the protest site as local police hold back local residents and pro-government supporters on October 3 in Mong Kok, Hong Kong. Fights broke out between local residents and pro government supporters when they attempted to force pro-democracy activists from their protest site. Thousands of pro democracy supporters continue to occupy the streets surrounding Hong Kong’s Financial district. Protest leaders have set an October 1st deadline for their demands to be met and are calling for open elections and the resignation of Hong Kong’s Chief Executive Leung Chun-ying. ||Photo by Chris McGrath/Getty Images