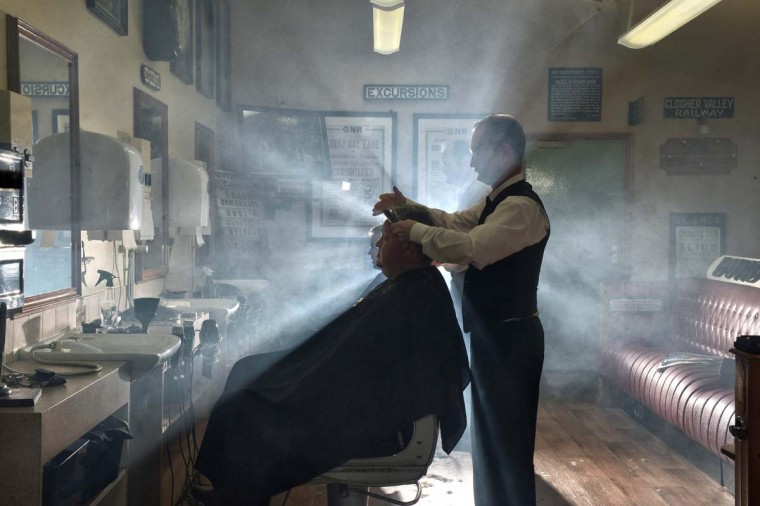 A customer of the Headhunters Barber Shop and Railway Museum gets a hair and from station master Nigel Johnston on September 29, 2014 in Enniskillen, Northern Ireland. Established in 2002, with the help of former railway employees and enthusiasts, the museum is run by three brothers, Selwyn, Nigel and Gordon Johnston whose purpose whilst operating a busy hairdressing service from within the museum is to collect, preserve, and interpret local railway heritage for the benefit of the community. Visitors and customers both start their journey at the reconstructed Railway Booking Office where the ticket collector invites you to step on board and enjoy the evocative nostalgia and artefacts associated with the railways which operated throughout Fermanagh and the Border Counties until their closure in 1957. (Charles McQuillan/Getty Images) 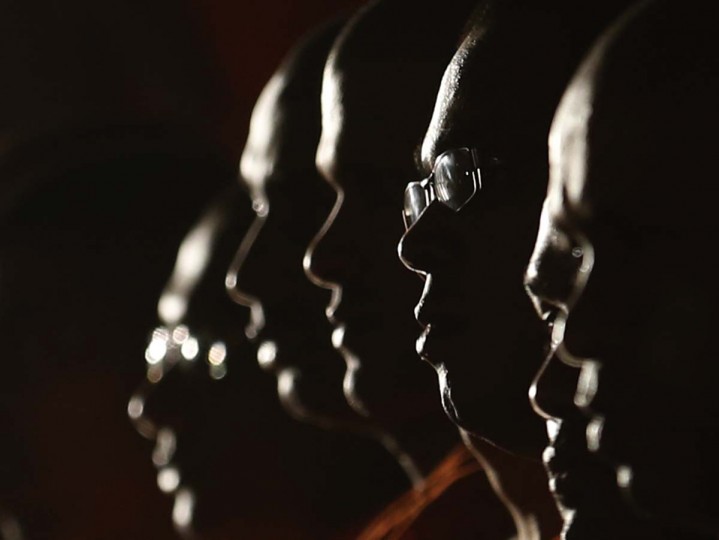 Monks from Buddhist organization Bodu Bala Sena (Buddhist Power Force, BBS) attend a speech by Ashin Wirathu at a BBS convention in Colombo, September 28, 2014. Wirathu, a radical monk who heads a movement accused of stirring violence against Muslims in Myanmar has announced a partnership with BBS, a hardline Buddhist group in Sri Lanka to defend their religion. The declaration by Wirathu, who once called himself “the Burmese bin Laden”, was the clearest signal to date of a push to spread the ideology of his controversial 969 movement beyond Myanmar to build a front against Islamist militancy. (Dinuka Liyanawatte/Reuters) 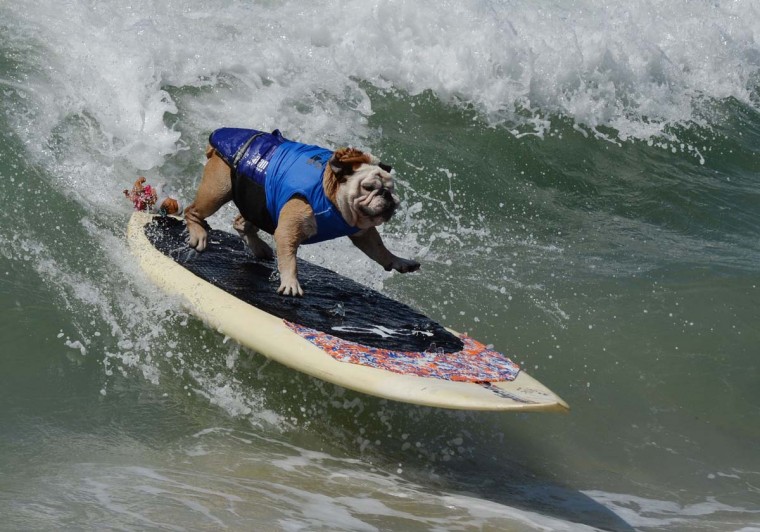 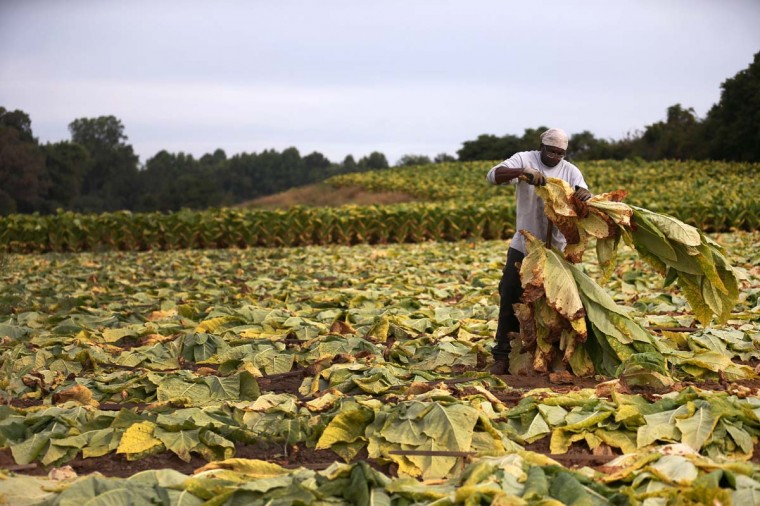 Farm worker Tracy Creek spears tobacco leaves onto a stick so they can be hung and dried in a barn at Lewis Farm September 29, 2014 in Owings, Maryland. Tobacco has been grown on the Lewis Farm for over 60 years and still requires to be harvested by hand. Starting next month the remaining tobacco growers in the U.S. will be forced to compete in the open market and will stop getting buyout checks from cigarette makers to compensate them for surrendering their quotas. (Mark Wilson/Getty Images) 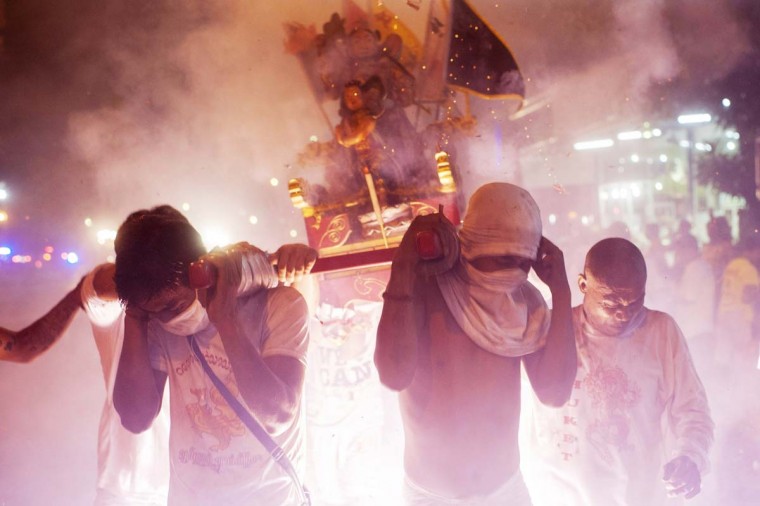 Vegetarian festival devotees of Jui Tui shrine parade through the streets as firecrackers go off on September 29, 2014 in Phuket, Thailand. Ritual Vegetarianism in Phuket Island traces its roots back to the early 1800’s. The annual festival begins on the first evening of the ninth lunar month and lasts for nine days. Participants in the festival perform acts of body piercing as a means of shifting evil spirits from individuals onto themselves and bring the community good luck. The ritualized mutilation is performed at a local Buddhist shrine under a trance-like state and is careful supervised. (Borja Sanchez-Trillo/Getty Images) 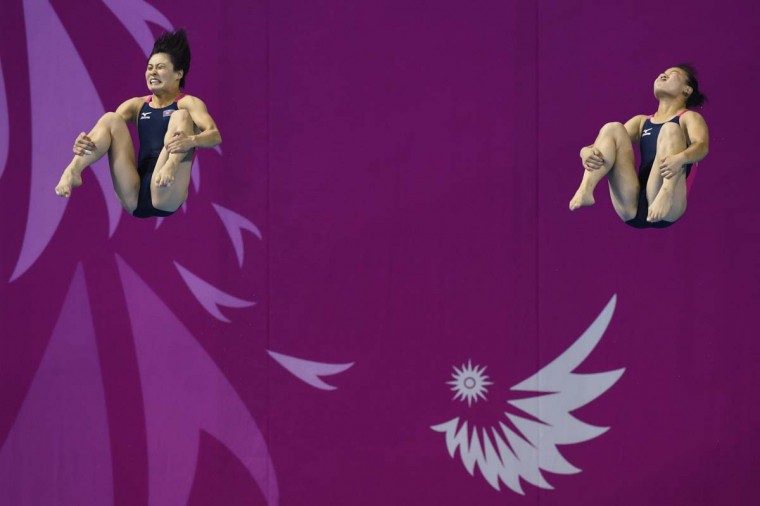 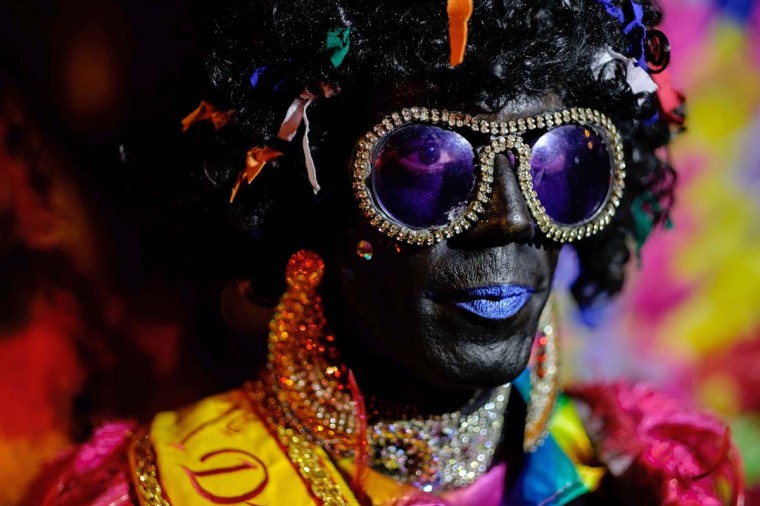 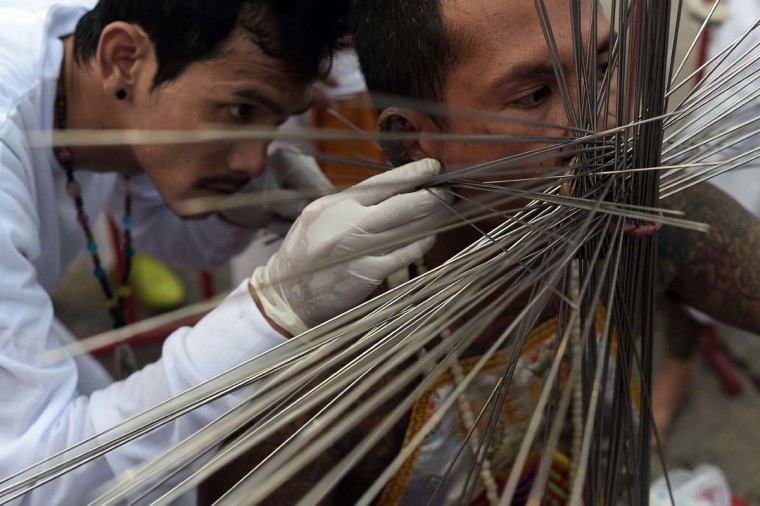 A devotee of the Chinese Bang Neow Shrine has metal rods inserted into his cheeks ahead of a street procession during the annual Vegetarian Festival in the southern Thai town of Phuket on September 29, 2014. During the festival, which begins on the first evening of the ninth lunar month and lasts nine days, religious devotees slash themselves with swords, pierce their cheeks with sharp objects and commit other painful acts to purify themselves, taking on the sins of the community. (Christophe Archambault/AFP/Getty Images) 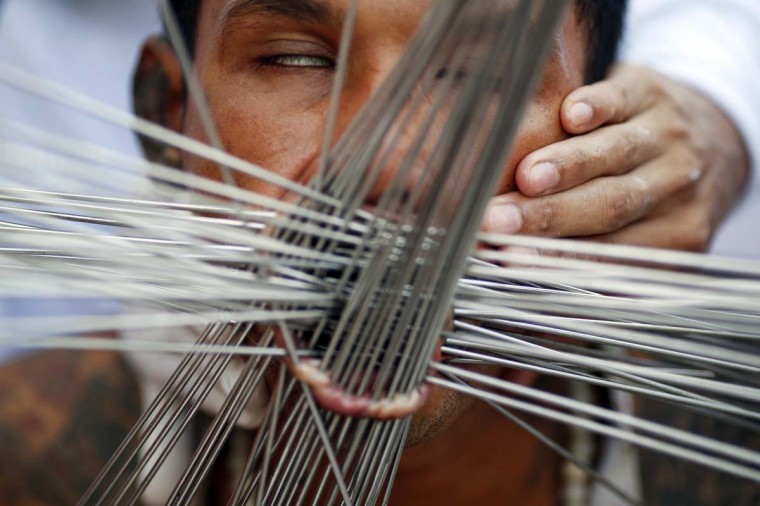 A devotee of the Chinese Bang Neow Shrine is seen in trance as more spikes are put through his cheeks and lips before a procession celebrating the annual vegetarian festival in Phuket September 29, 2014. The festival, featuring face-piercing, spirit mediums and strict vegetarianism celebrates the local Chinese community’s belief that abstinence from meat and various stimulants during the ninth lunar month of the Chinese calendar will help them obtain good health and peace of mind. (Damir Sagolj/Reuters) 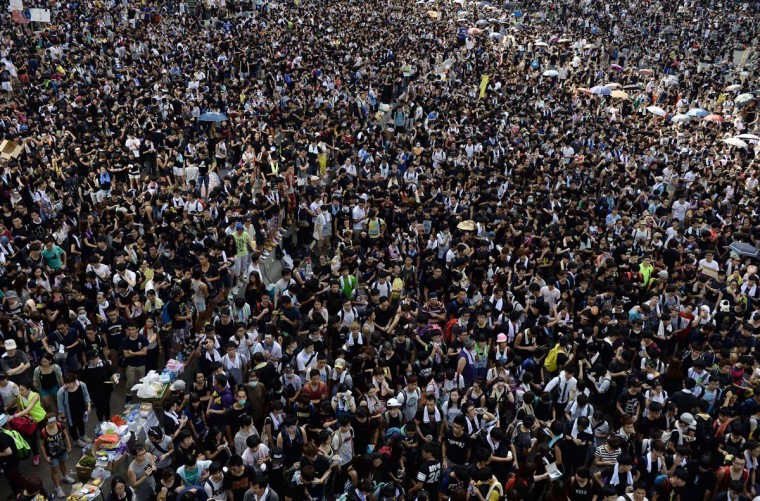 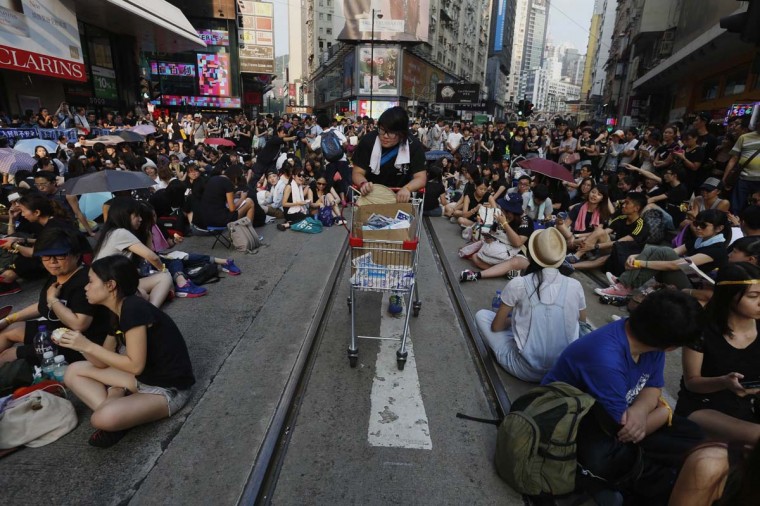 A student provides supplies on a tram track as thousands of students occupy a main street at Causeway Bay shopping district in Hong Kong September 29, 2014. Increasing civil unrest in Hong Kong is scaring off Chinese tourists, heaping further pressure on retailers which are already grappling with a protracted slowdown in sales. (Bobby Yip/Reuters) 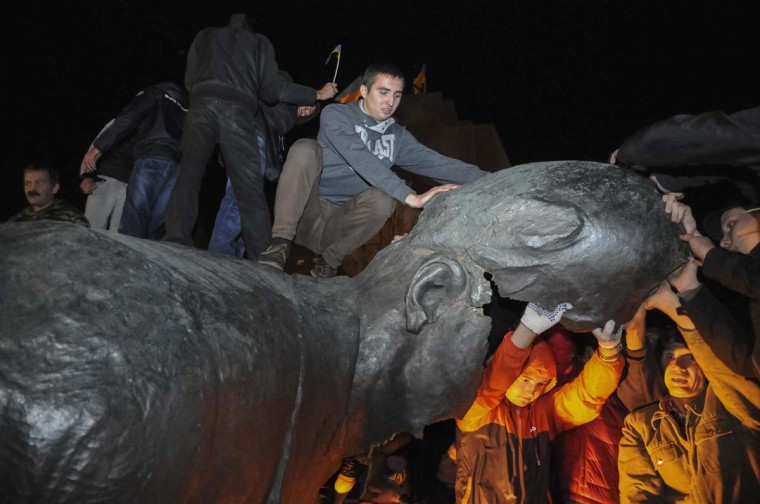 People react after a statue of Soviet state founder Vladimir Lenin was toppled by protesters during a rally organized by pro-Ukraine supporters in the centre of the eastern Ukrainian town of Kharkiv September 28, 2014. Picture taken September 28, 2014. (Reuters)