This month in space we’ve had a supermoon, Northern Lights, and solar flares show face. 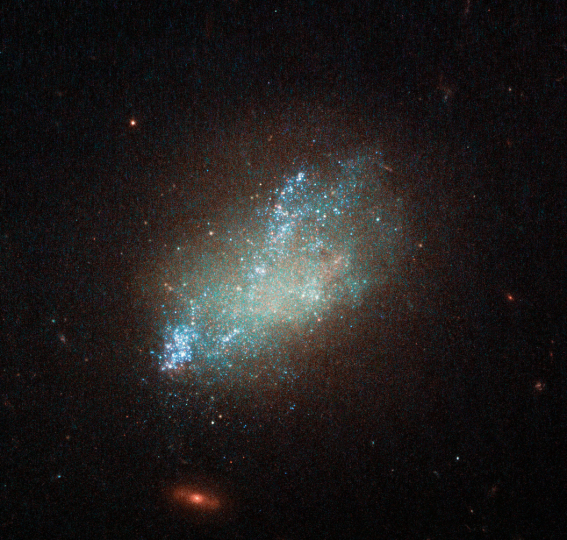 Far beyond the stars in the constellation of Leo (The Lion) is irregular galaxy IC 559. IC 559 is not your everyday galaxy. With its irregular shape and bright blue spattering of stars, it is a fascinating galactic anomaly. It may look like sparse cloud, but it is in fact full of gas and dust which is spawning new stars. Discovered in 1893, IC 559 lacks the symmetrical spiral appearance of some of its galactic peers and not does not conform to a regular shape. It is actually classified as a “type Sm” galaxy — an irregular galaxy with some evidence for a spiral structure. (NASA) 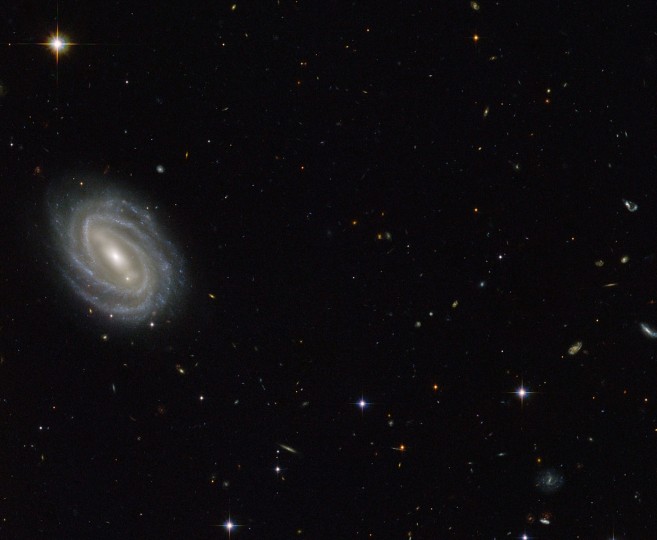 This NASA/ESA Hubble Space Telescope image obtained September 8, 2014 shows a spiral galaxy known as PGC 54493, located in the constellation of Serpens (The Serpent). This galaxy is part of a galaxy cluster that has been studied by astronomers exploring an intriguing phenomenon known as weak gravitational lensing. This effect, caused by the uneven distribution of matter (including dark matter) throughout the Universe, has been explored via surveys such as the Hubble Medium Deep Survey. Dark matter is one of the great mysteries in cosmology. It behaves very differently from ordinary matter as it does not emit or absorb light or other forms of electromagnetic energy hence the term “dark”. Even though we cannot observe dark matter directly, we know it exists. One prominent piece of evidence for the existence of this mysterious matter is known as the “galaxy rotation problem”. Galaxies rotate at such speeds and in such a way that ordinary matter alone the stuff we see would not be able to hold them together. The amount of mass that is “missing” visibly is dark matter, which is thought to make up some 27 percent of the total contents of the Universe, with dark energy and normal matter making up the rest. PGC 55493 has been studied in connection with an effect known as cosmic shearing. This is a weak gravitational lensing effect that creates tiny distortions in images of distant galaxies. (NASA) 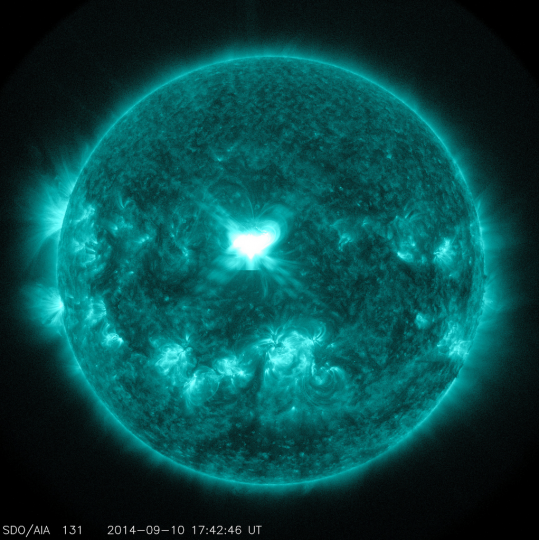 An X1.6 class solar flare flashes in the middle of the sun in this image taken September 10, 2014, in this image courtesy of NASA. This image was captured by NASA’s Solar Dynamics Observatory and shows light in the 131 Angstrom wavelength, which is typically colorized in teal. A rare double burst of magnetically charged solar storms will hit Earth Thursday night and Friday, raising concerns that GPS signals, radio communications and power transmissions could be disrupted, officials said on September 11, 2014. (NASA) 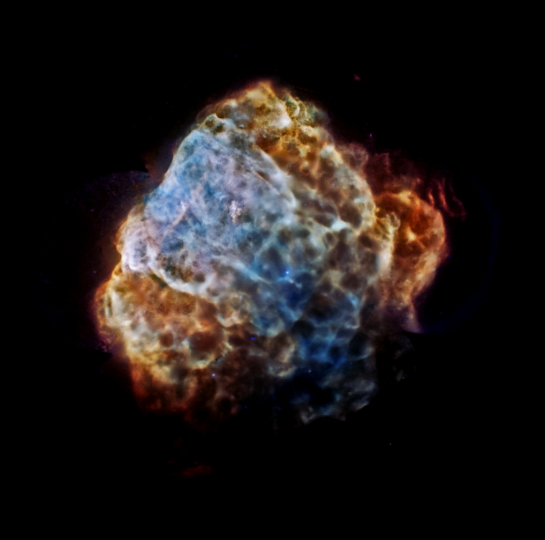 The destructive results of a powerful supernova explosion reveal themselves in a delicate tapestry of X-ray light, as seen in this image from NASA’s Chandra X-Ray Observatory and the European Space Agency’s XMM-Newton. The image shows the remains of a supernova that would have been witnessed on Earth about 3,700 years ago. The remnant is called Puppis A, and is around 7,000 light years away and about 10 light years across. This image provides the most complete and detailed X-ray view of Puppis A ever obtained, made by combining a mosaic of different Chandra and XMM-Newton observations. Low-energy X-rays are shown in red, medium-energy X-rays are in green and high energy X-rays are colored blue. (NASA/JPL-Caltech) 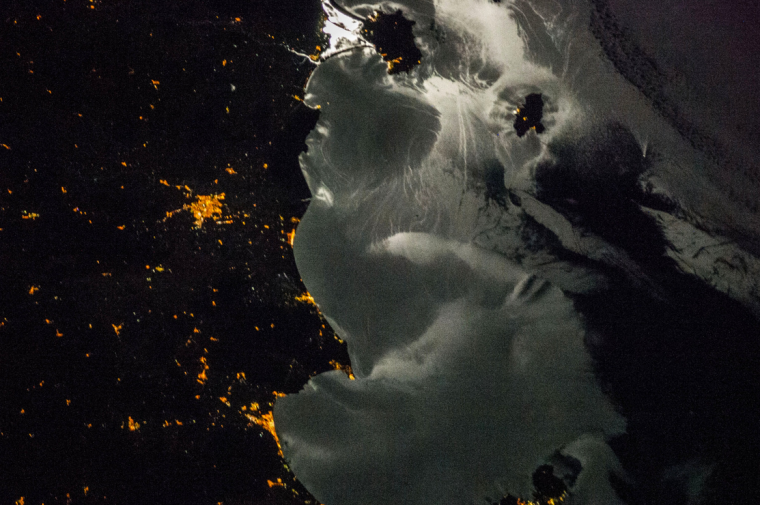 This soft-focus image taken by a crewmember aboard the International Space Station during Expedition 37 shows the Elba-Follonica-Grosseto-Orbetello area of Italy at night, with moonglint on the surrounding waters. (NASA) 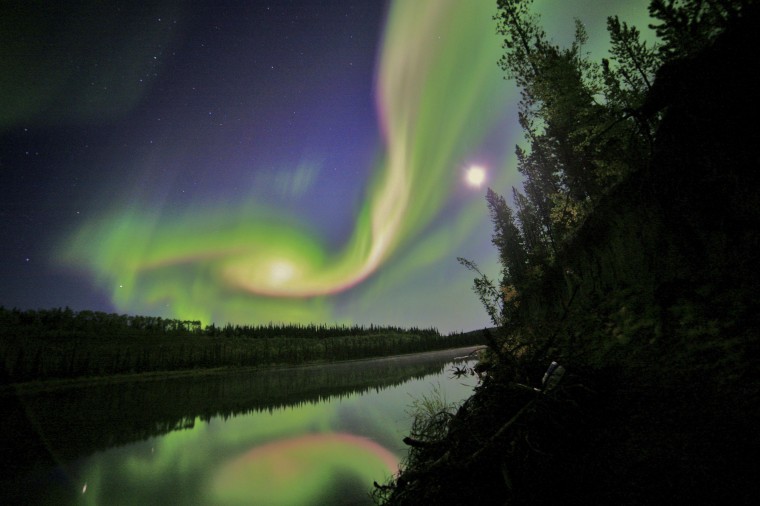 Swirls of green and red appear in an aurora over Whitehorse, Yukon on the night of September 3, 2012 in this NASA handout image. Stargazers across a wide swath of the United States could get a rare view on September 12, 2014 of the northern lights, a colorful cosmic display normally only visible in far northern latitudes. (Courtesy of David Cartier, Sr./NASA) 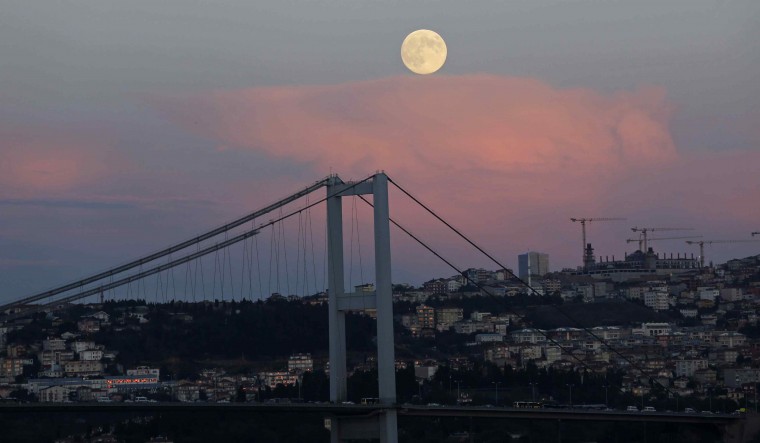 A full moon rises over the Bosphorus bridge in Istanbul September 8, 2014. The September full moon, also known as the Harvest Moon, is the last of this summer’s three supermoons, and the final one of the year. (Murad Sezer/Reuters)

« Exhibition by Daniel Buren at the MaMo art center in Marseille » Best of high school sports: Week of Sept. 8-13