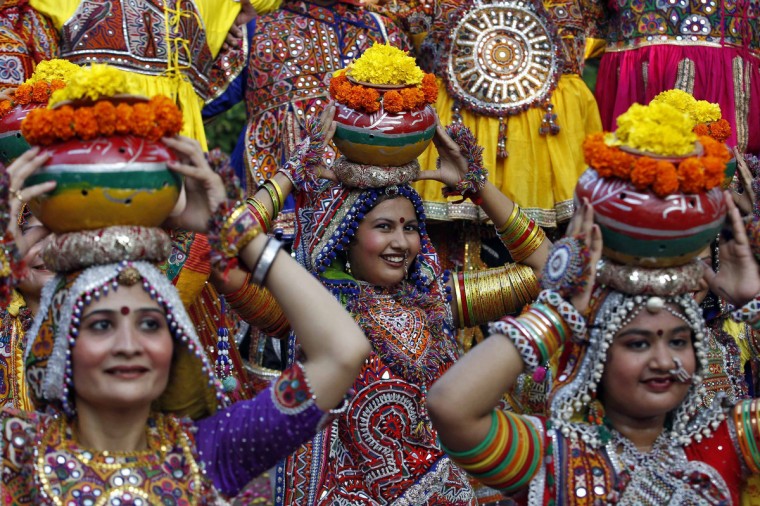 Women dressed in traditional attire pose as they take part in rehearsals for the “garba” dance ahead of Navratri festival in the western Indian city of Ahmedabad. Navratri, held in honour of Hindu Goddess Durga, is celebrated over a period of nine days where thousands of youths dance the night away in traditional costumes. Navratri starts on September 25. (Amit Dave/Reuters) 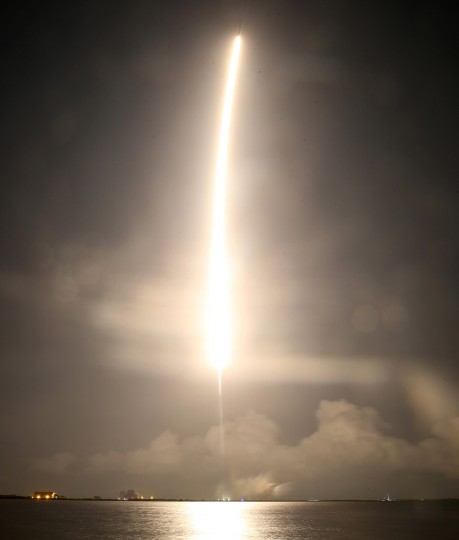 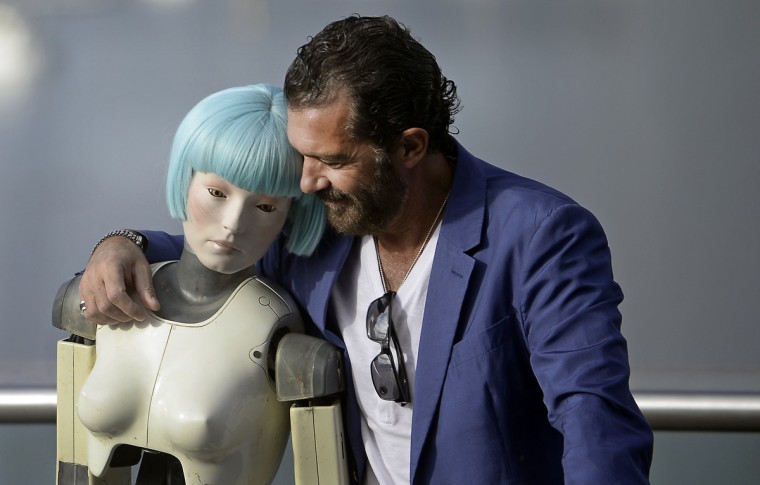 Spanish actor Antonio Banderas embraces a robot used in the film Automata during a photocall on the third day of the 62nd San Sebastian Film Festival. Banderas stars in and produced the science fiction film, which is part of the festival’s official section. (Vincent West/Reuters) 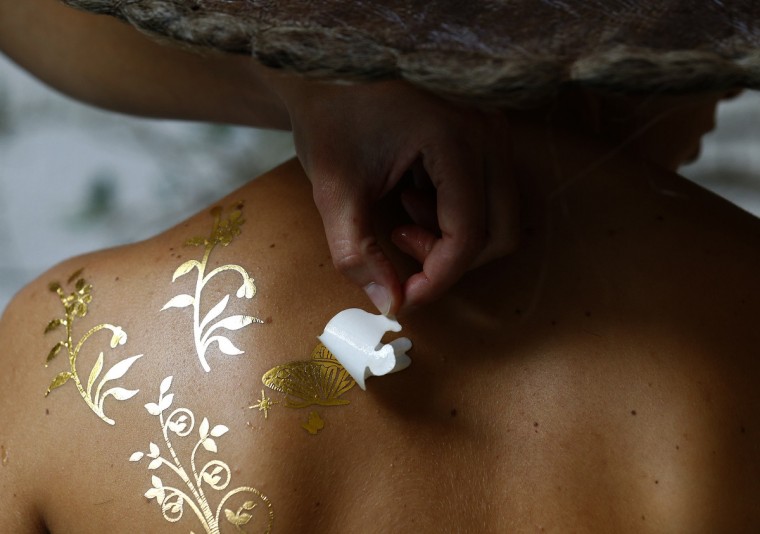 A stylist applies a 24 karat gold temporary tattoo on a model during a beauty workshop at Milan Fashion week. (Stefano Rellandini/Reuters) 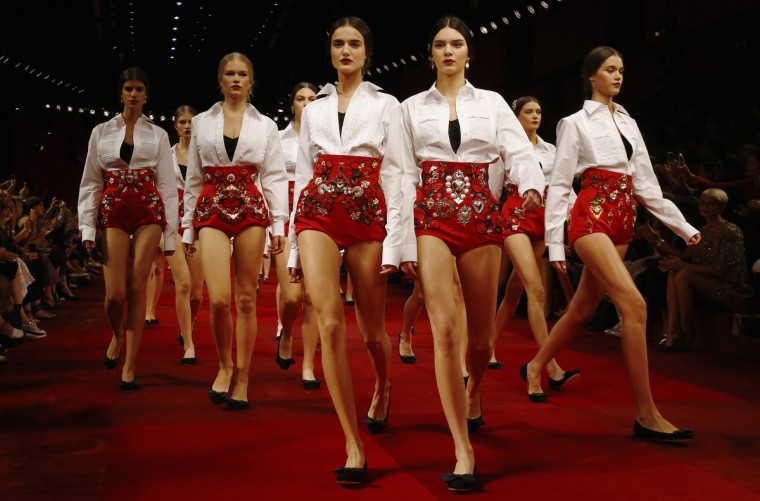 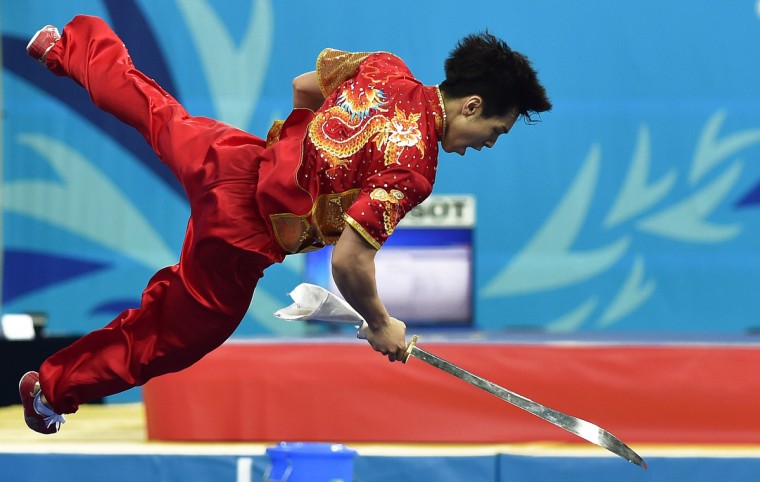 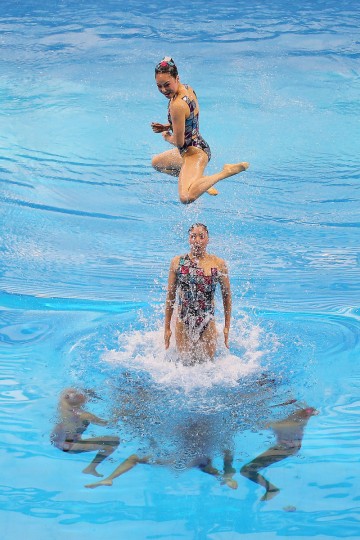 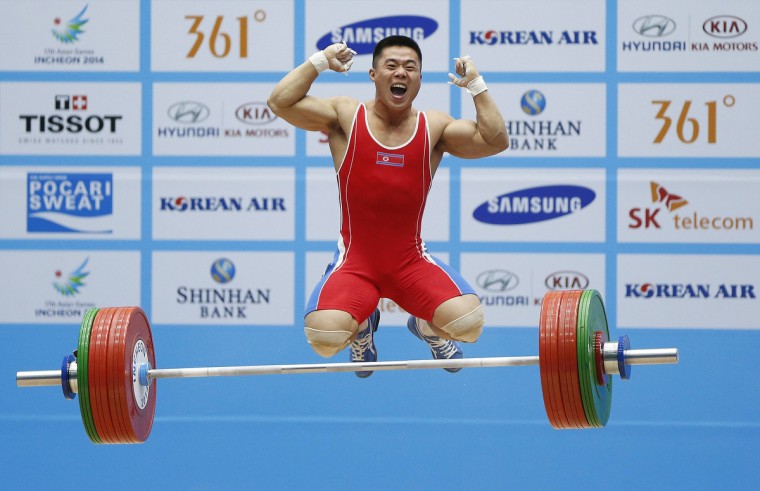 North Korea’s Kim Unguk celebrates after breaking his own world record for the men’s snatch 62kg weightlifting competition after lifting 154kg on his third attempt at the Moonlight Garden Venue during the 17th Asian Games in Incheon. (Olivia Harris/Reuters) 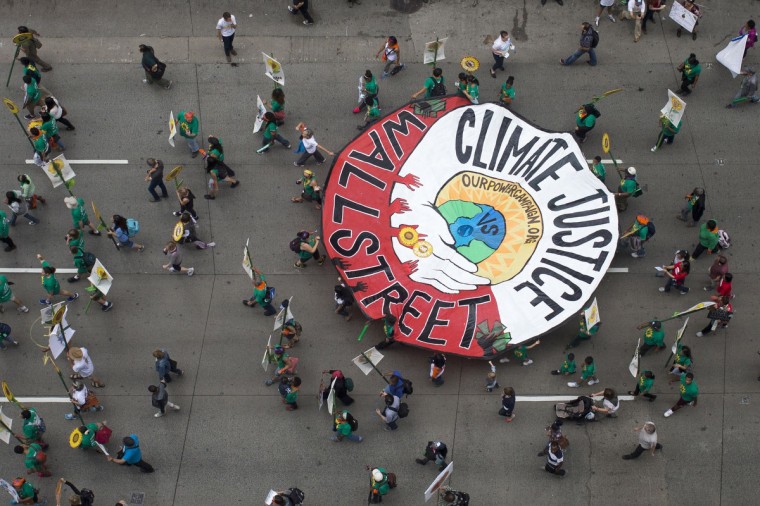 Activists hold signs as they march down 6th Avenue while taking part in the People’s Climate March through Midtown, New York. World leaders including U.N. Secretary-General Ban Ki-moon were set to join farmers, fishermen, children and others in a massive demonstration on Sunday to demand action on climate change. Organizers are expecting 100,000 to join the People’s Climate March in midtown Manhattan ahead of this week’s U.N. General Assembly, which brings together 120 world leaders to discuss reducing carbon emissions that threaten the environment. (Adrees Latif/Reuters) 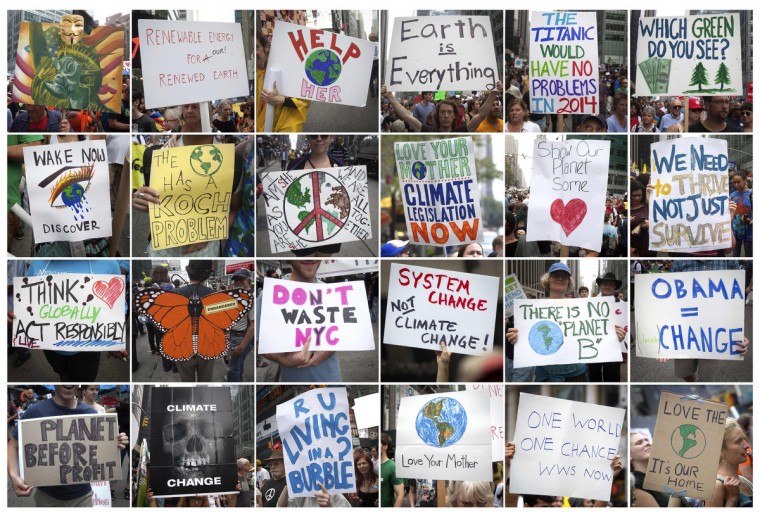 This combination image shows protest signs being carried during the “People’s Climate March” down 6th Ave. in the Manhattan borough of New York. Organizers are expecting up to 100,000 to join the People’s Climate March in midtown Manhattan ahead of this week’s U.N. General Assembly, which brings together 120 world leaders to discuss reducing carbon emissions that threaten the environment. (Carlo Allegri/Reuters) 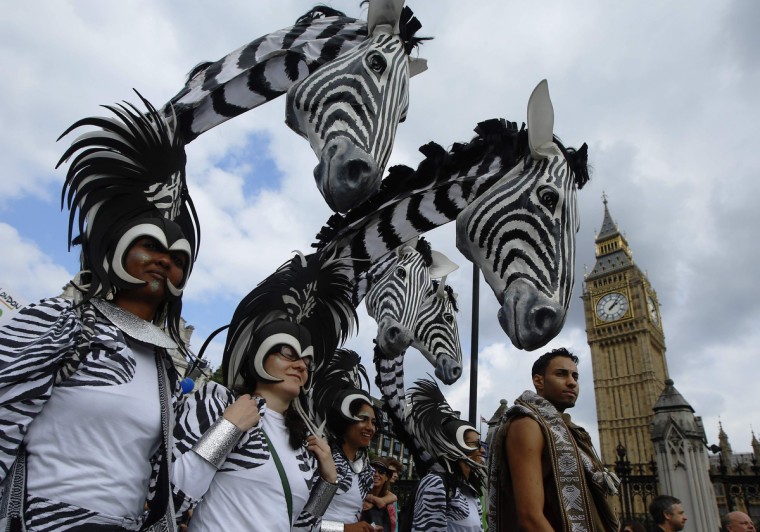 Demonstrators in animal costumes walk in the “People’s Climate March” in central London. The London march was one many held worldwide, ahead of the forthcoming U.N. Emergency summit on climate change. (Luke MacGregor/Reuters) 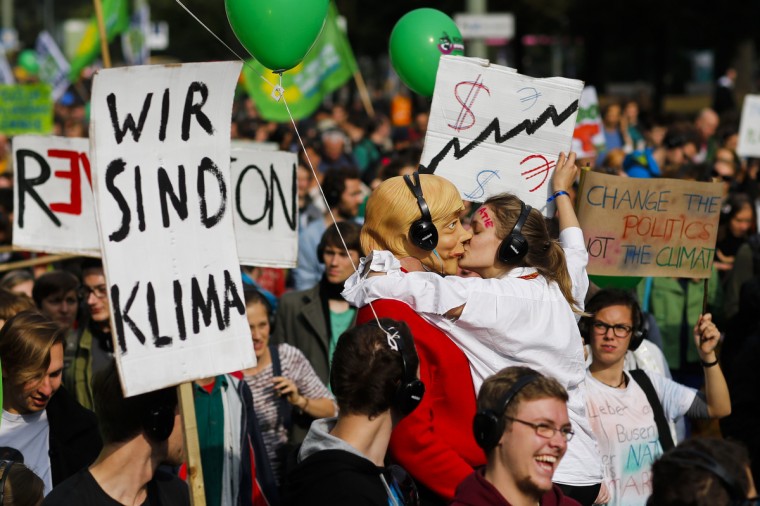 A protester, posing as a lobbyist, kisses another wearing a mask of German Chancellor Angela Merkel during a Climate Change March in Berlin. The People’s Climate March, a global action day organized ahead of next week’s United Nations climate summit in New York, is demanding politicians take tougher action to protect the climate. (Thomas Peter/Reuters) 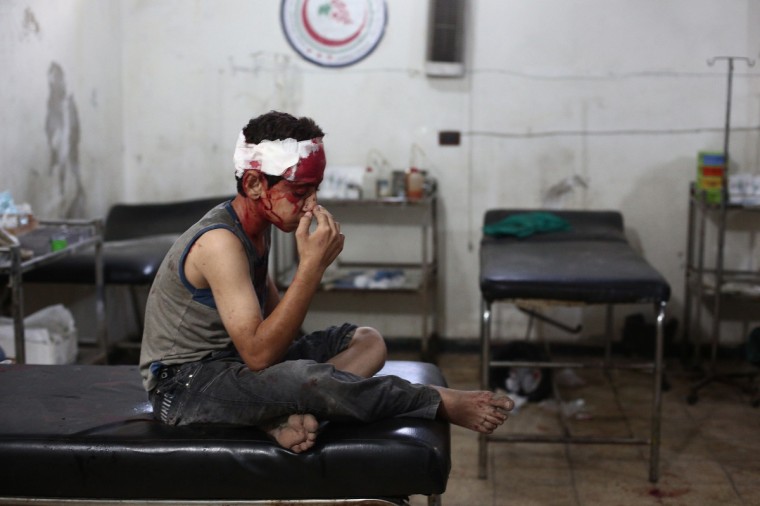 An injured boy sits at a makeshift hospital in the besieged rebel bastion of Douma, northeast of the Syrian capital Damascus following two reported airstrikes by government forces. Some 191,000 people have been killed since an uprising against President Bashar al-Assad’s rule erupted in March 2011. (Abd Douamany/Getty Images) 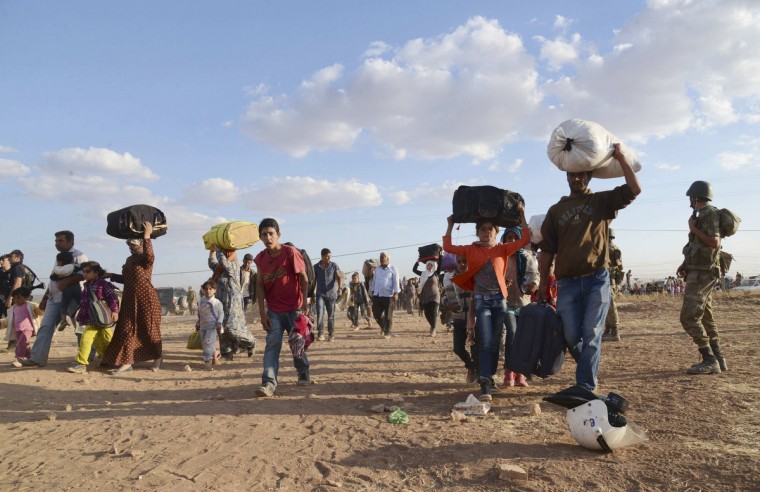 Syrian Kurds walk with their belongings after crossing into Turkey at the Turkish-Syrian border, near the southeastern town of Suruc in Sanliurfa province. About 60,000 Syrian Kurds fled into Turkey in the space of 24 hours, a deputy prime minister said on Saturday, as Islamic State militants seized dozens of villages close to the border. Turkey opened a stretch of the frontier on Friday after Kurdish civilians fled their homes, fearing an imminent attack on the border town of Ayn al-Arab, also known as Kobani. A Kurdish commander on the ground said Islamic State had advanced to within 15 km (9 miles) of the town.(Reuters) 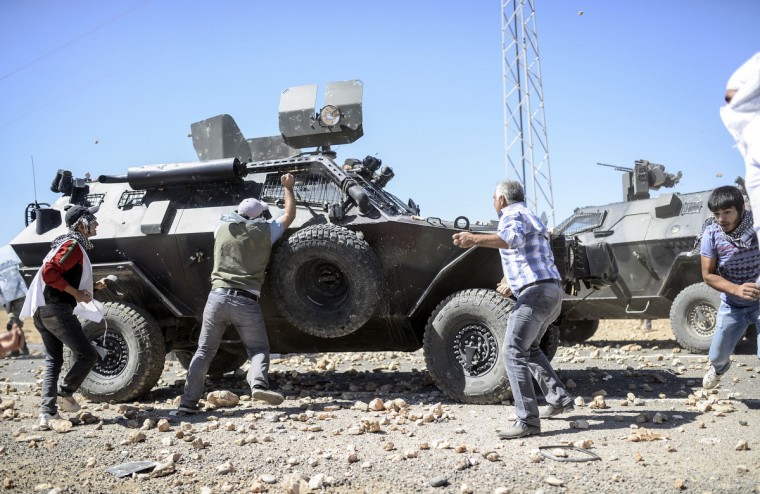 Kurdish people clash with Turkish soldiers near the Syrian border after Turkish authorities temporarily closed the border at the southeastern town of Suruc in Sanliurfa province,. Tens of thousands of Syrian Kurds flooded into Turkey on Saturday, fleeing an onslaught by the jihadist Islamic State group that prompted an appeal for international intervention. (Bulent Kilic/Getty Images) 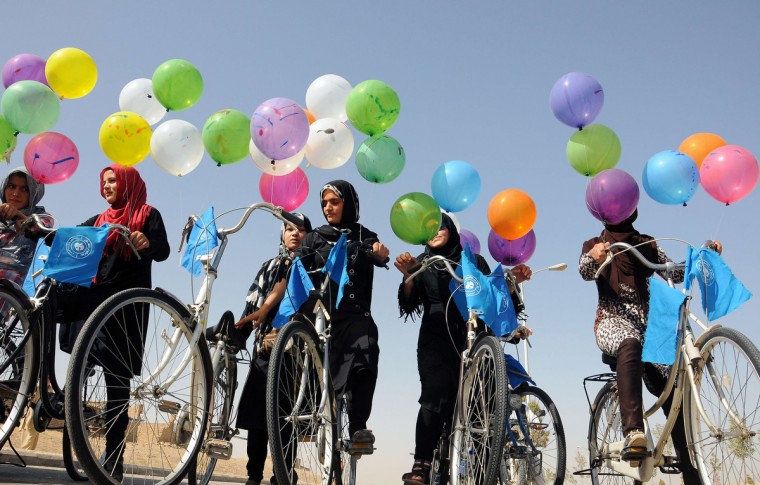 Afghan residents take part in cycling race during World Peace Day in Mazar-i-sharif. Each year the International Day of Peace is observed around the world on 21 September. The General Assembly has declared this as a day devoted to strengthening the ideals of peace, both within and among all nations and peoples. (Farshad Usyan/Getty Images) 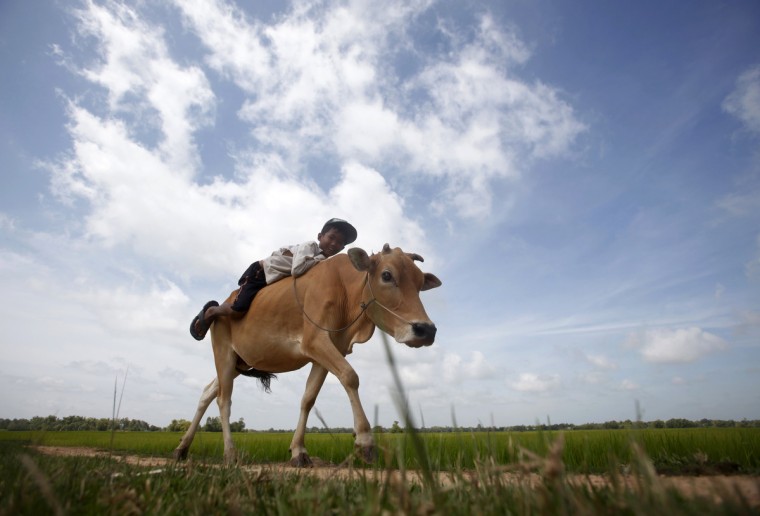 A boy rides his cow on a paddy field as he returns back home in Svay Rieng province. (Samrang Pring/Reuters) 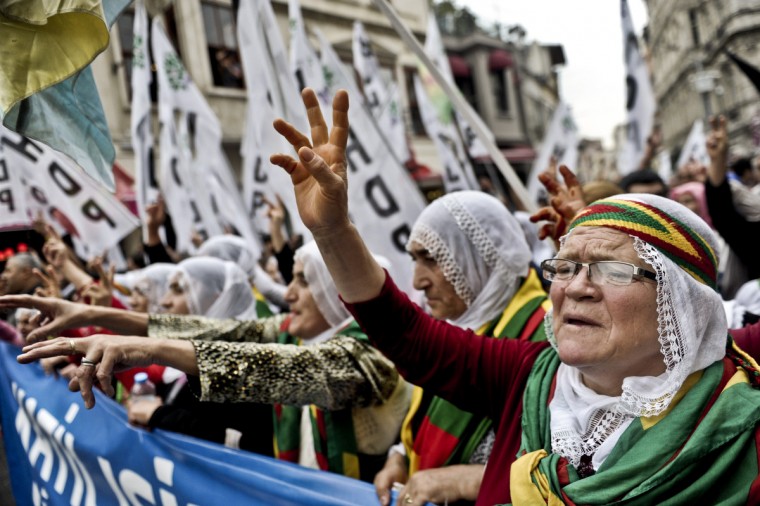 Kurds shout slogan against the Turkish government and the jihadist Islamic State (IS)group during a demonstration on Istiklal avenue in Istanbul. Tens of thousands of Syrian Kurds flooded into Turkey on September 20, fleeing an onslaught by the IS that prompted an appeal for international intervention. (Ozan Kose/Getty Images) 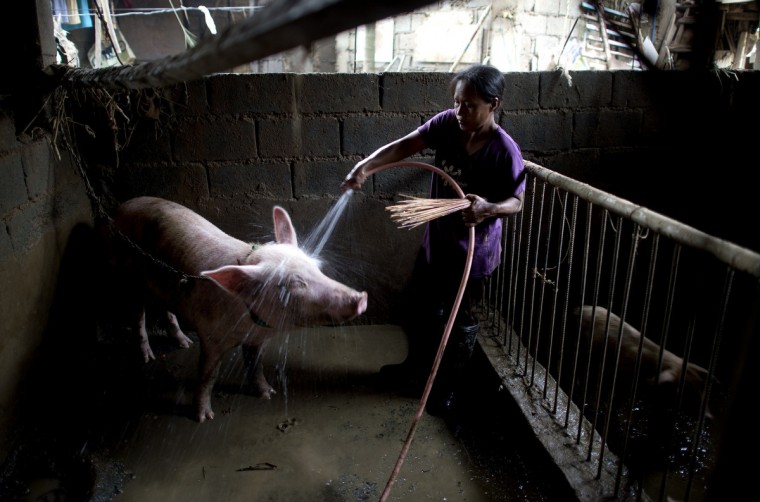 A woman sprays water on a pig inside a pig sty on the first floor of her house that was flooded in heavy rains brought by Tropical Storm Fung-Wong, at Banaba village in Marikina City, suburban Manila,. Thousands of people displaced by floods triggered by tropical storm Fung-Wong returned to their mud-caked homes in the Philippine capital as the death toll from the disaster rose to ten, officials said. (Noel Celis/Getty Images) 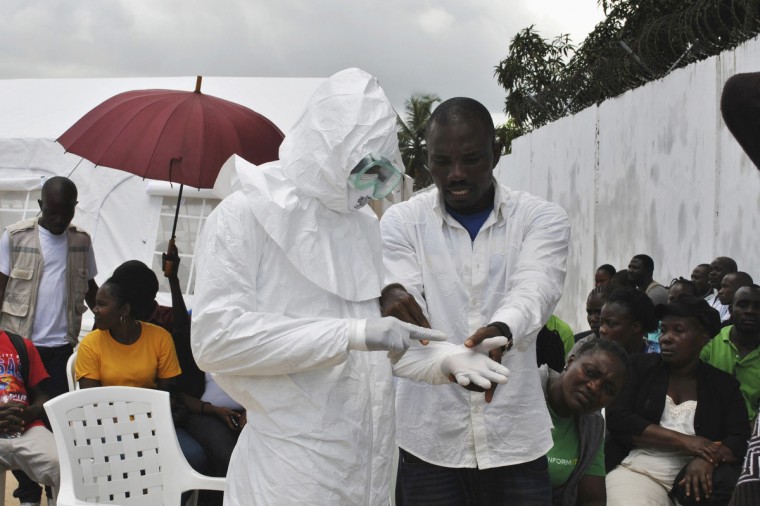 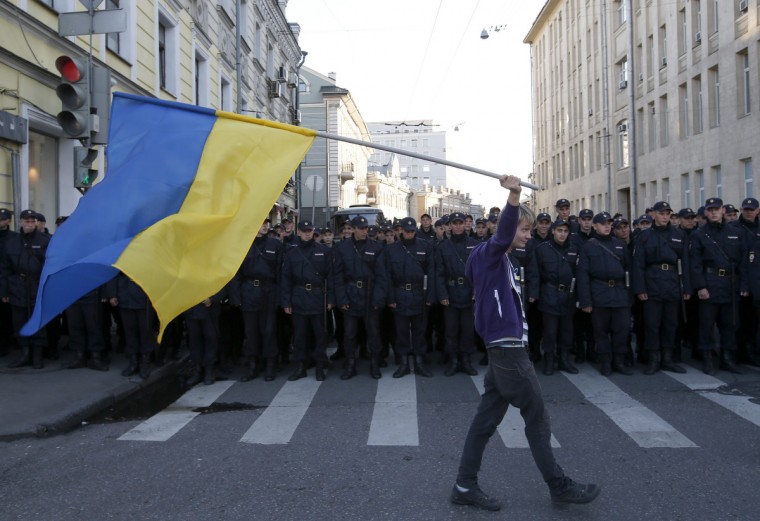 A man with a Ukrainian flag walks past riot police standing guard during an anti-war rally in Moscow. (Maxim Zmeyev/Reuters) 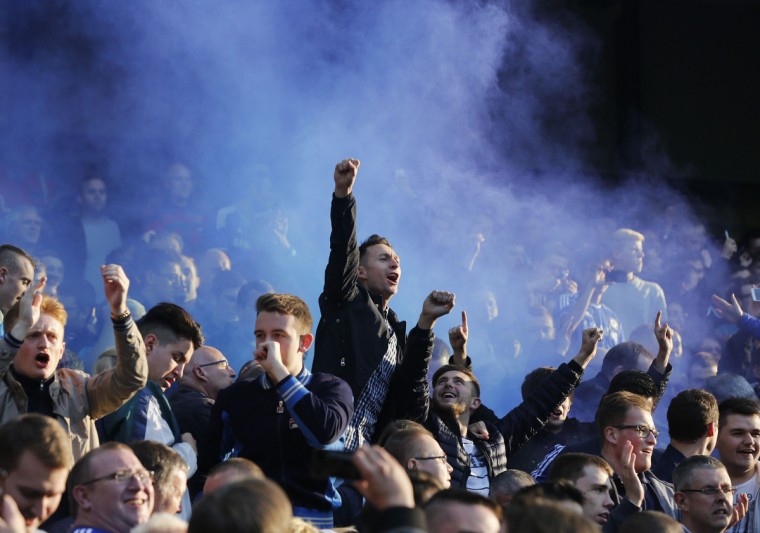 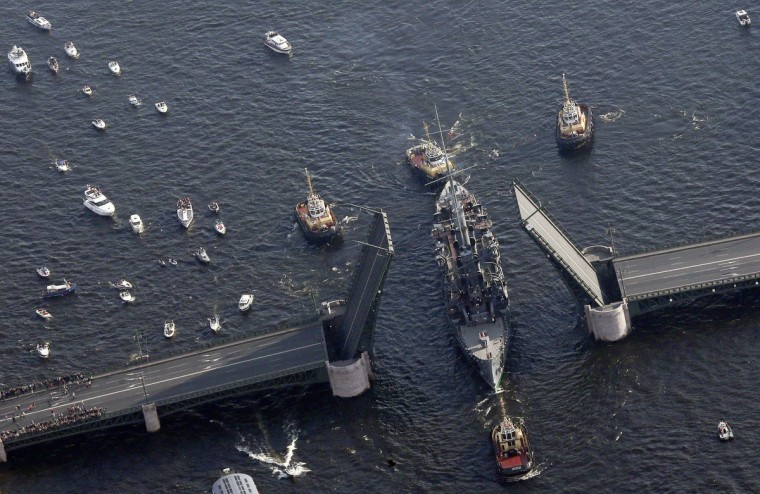 Museum ship, the cruiser Aurora, is towed along the Neva River in St. Petersburg. The former warship, which was used during the Russian-Japanese War in 1904-05 and the October Revolution in Russia in 1917, is towed for planned repair works. She is the oldest commissioned ship of the Russian Navy, still flying the naval ensign under which she was commissioned, but now under the care of the Central Naval Museum. She is still manned by an active service crew. (Georgy Polyakov/Getty Images)