Grazing goats, retro hams, a message made of meat | Sept. 26 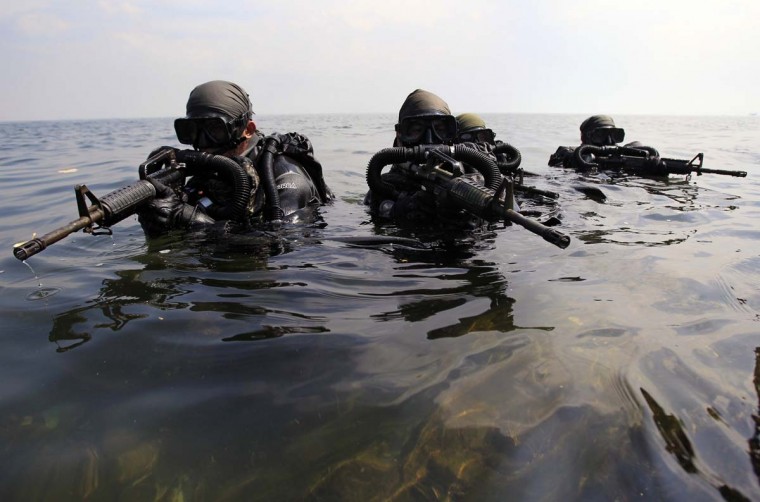 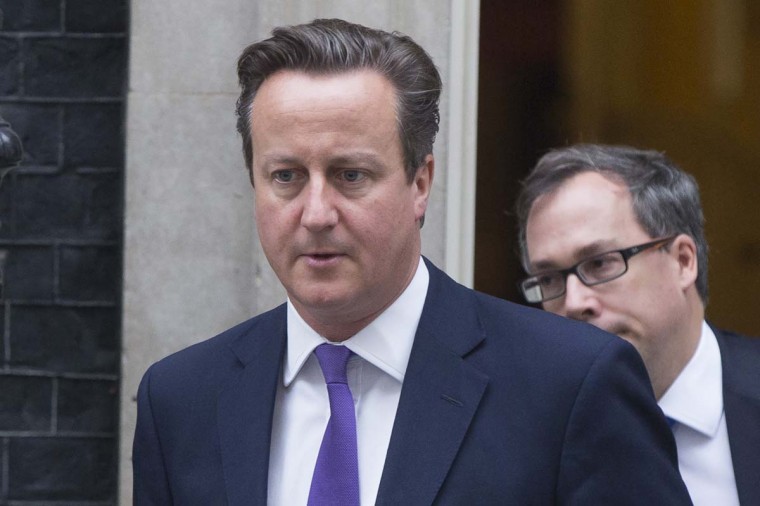 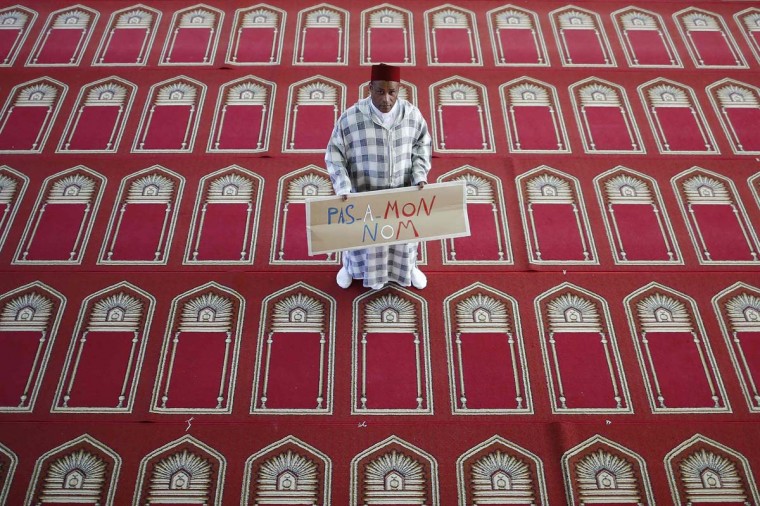 Muslim Khaloar Abdarahim holds a placard which reads “Not in my name” as he poses inside the Arrahma Mosque after Friday prayers in Nantes, western France, September 26 after a gathering to pay tribute to French mountain guide Herve Gourdel who was beheaded by an Algerian Islamist group. Thousands of French Muslims, who at 5 million make up about eight percent of the population, are set to rally across the country on Friday to protest Islamic State, which many say does not represent their religion. || PHOTO CREDIT: STEPHANE MAHE – REUTERS 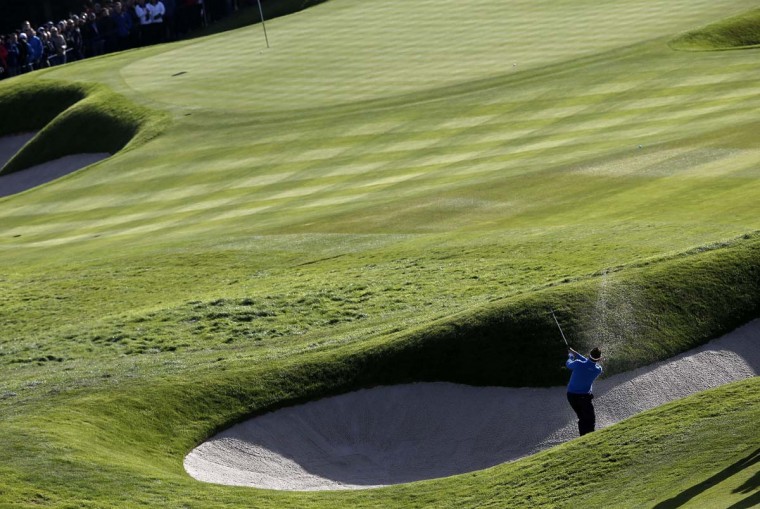 Ian Poulter of England chips from a bunker on the eighth hole during the fourball golf matches at Gleneagles in Gleneagles, Scotland, on September 26, during the 2014 Ryder Cup competition between Europe and the USA. || CREDIT: ADRIAN DENNIS – AFP/GETTY IMAGES 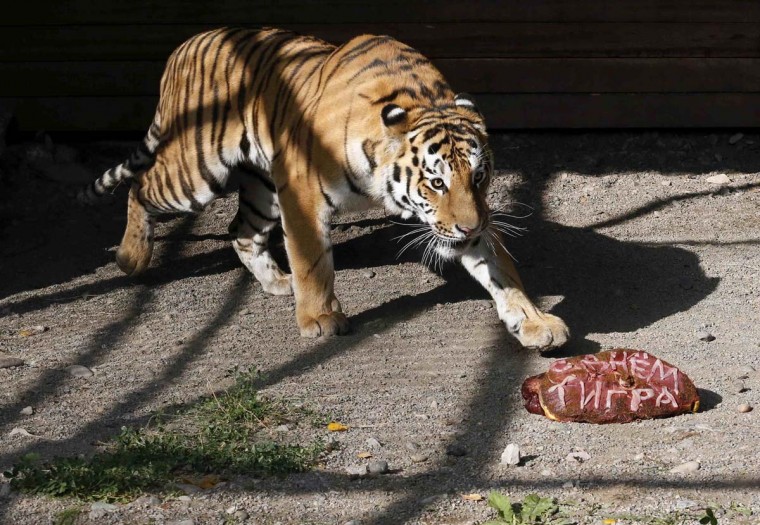 Bartek, a 2-year-old Amur tiger, approaches a slab of meat inside his open-air cage as zoo keepers mark the upcoming Day of the Amur Tiger and the Far Eastern Leopard at the Royev Ruchey zoo in the suburbs of Krasnoyarsk, Siberia, September 26. The international day for the protection of Amur tigers and far eastern leopards will be celebrated on September 28, according to zoo employees and local media. The writing on the meat reads, ‘Cheers to the Tiger Day’. || PHOTO CREDIT: ILYA NAYMUSHIN – REUTERS 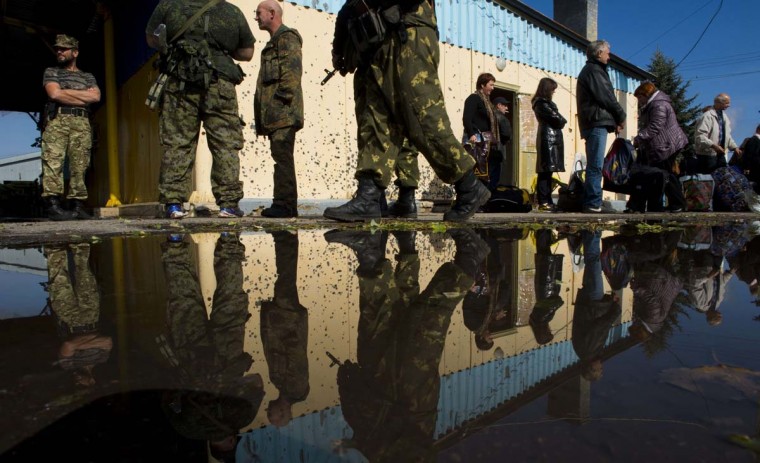 Passengers on a bus from Donetsk to Rostov in Russia, wait while their belongings are searched by border guards at the Uspenka border post separating Ukraine and Russia September 26. Ukrainian President Petro Poroshenko ordered a “temporary closure of Ukraine’s porous border with Russia on September 25, 2014, though 260km of that border are controlled by separatist forces in Donetsk and Luhansk. || CREDIT: JOHN MACDOUGALL – AFP/GETTY IMAGES 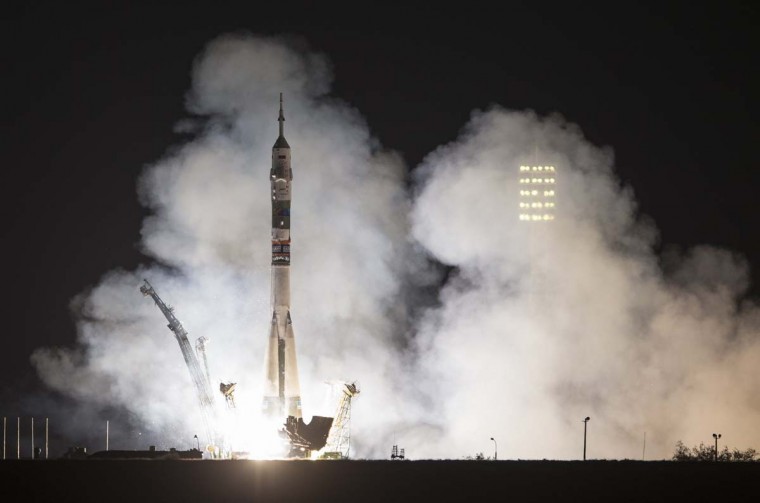 The Soyuz TMA-14M spacecraft carrying the International Space Station crew of Barry Wilmore of the U.S., Alexander Samokutyaev and Elena Serova of Russia blasts off from the launch pad at the Baikonur cosmodrome September 26. || PHOTO CREDIT: SHAMIL ZHUMATOV – REUTERS 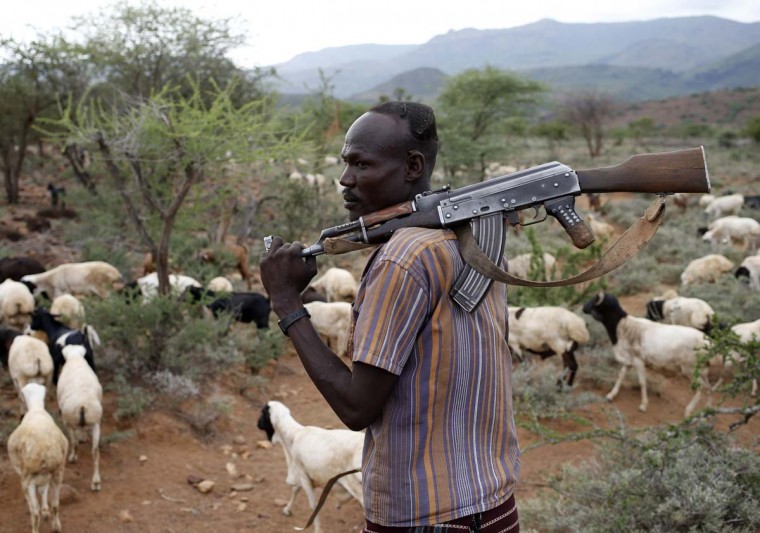 A Turkana man carrying a weapon herds his goats in northwestern Kenya inside the Turkana region of the Ilemy Triangle September 26. The Ilemi Triangle is a disputed region in East Africa, claimed by South Sudan and Kenya, bordering also Ethiopia. The dispute arose from unclear wording of a 1914 treaty which tried to allow free movement of the Turkana people, nomadic herders who had traditionally grazed the area. || PHOTO CREDIT: GORAN TOMASEVIC – REUTERS 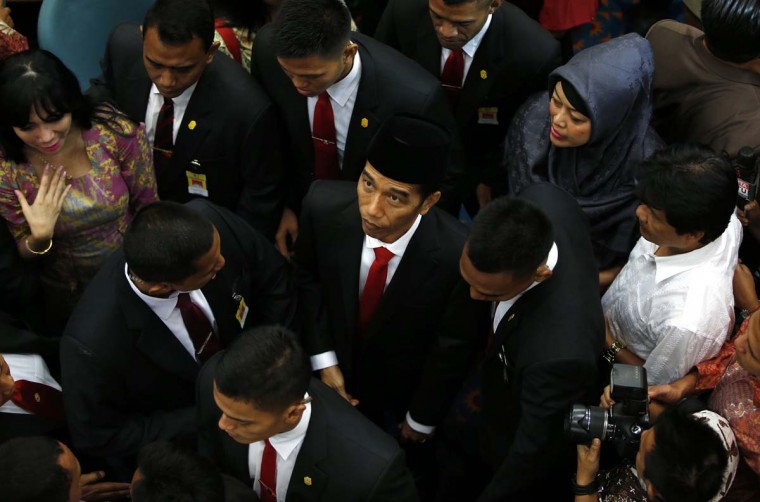 Indonesia’s president-elect and current Jakarta Governor Joko Widodo looks up as he leaves a swearing-in ceremony of new local legislators at the city council in Jakarta September 26. Indonesia’s parliament on Friday approved a measure ending direct elections for governors and mayors, a move Widodo criticised as a “big step back” for democracy in the country. Indonesia introduced direct elections for regional leaders in 2005, allowing the emergence of a new breed of politician free of links to the political elite, with Widodo being the best-known example. || PHOTO CREDIT: DARREN WHITESIDE – REUTERS 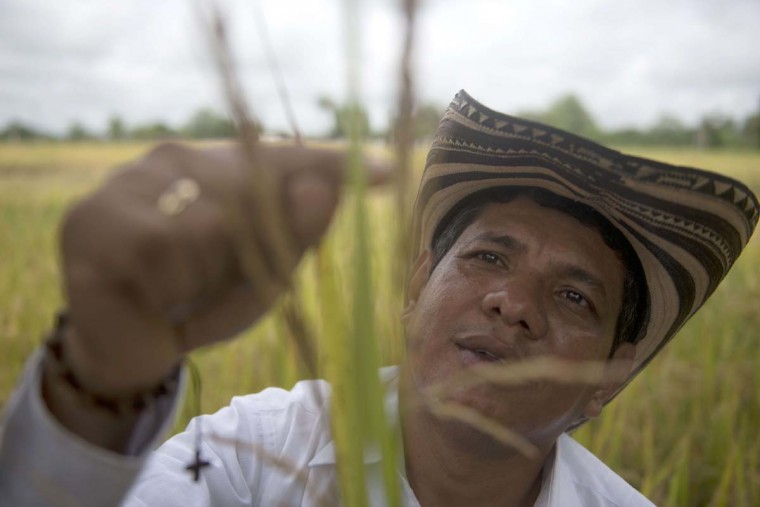 Fedearroz (the Colombian rice farmers federation) agronomist Cristo Perez, selects rice plants at La Victoria research center in Monteria, Cordoba department, northern Colombia on September 18. In Colombia, where more than 200 communities live out of growing rice in a surface of 450,000 hectares, in the last five years the yield per hectare has decreased in one ton due to the climate change. || CREDIT: EITAN ABRAMOVICH – AFP/GETTY IMAGES 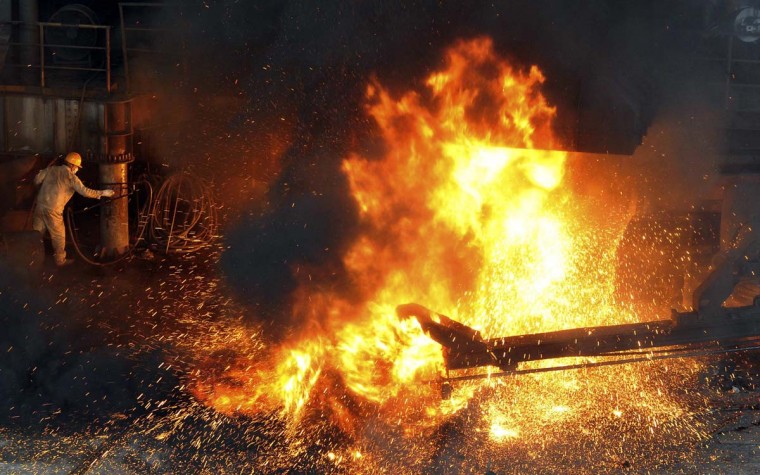 A worker works next to a furnace pouring out melted iron at a factory of the Dongbei Special Steel Group Co. Ltd., in Dalian, Liaoning province September 25. China’s steel consumption dropped this year for the first time since at least 2000 due to slower economic growth, leading to a surplus of iron ore in the country and a more than 40 percent plunge in prices of the steelmaking raw material. Picture taken September 25, 2014. || PHOTO CREDIT: CHINA DAILY VIA REUTERS 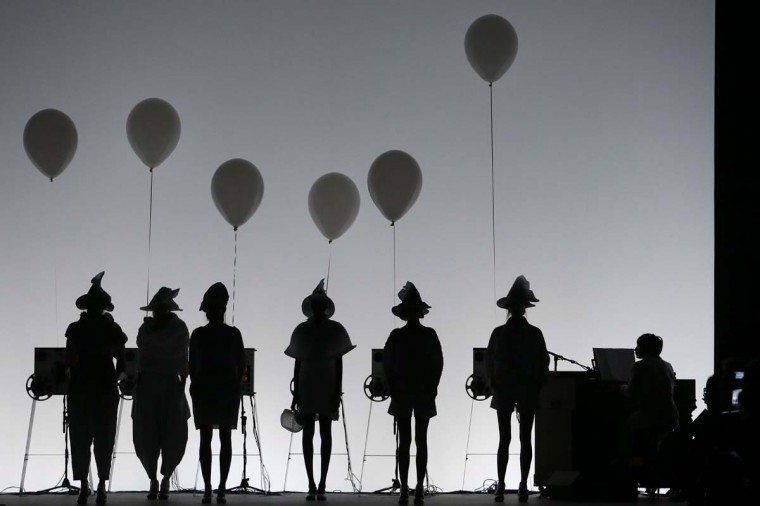 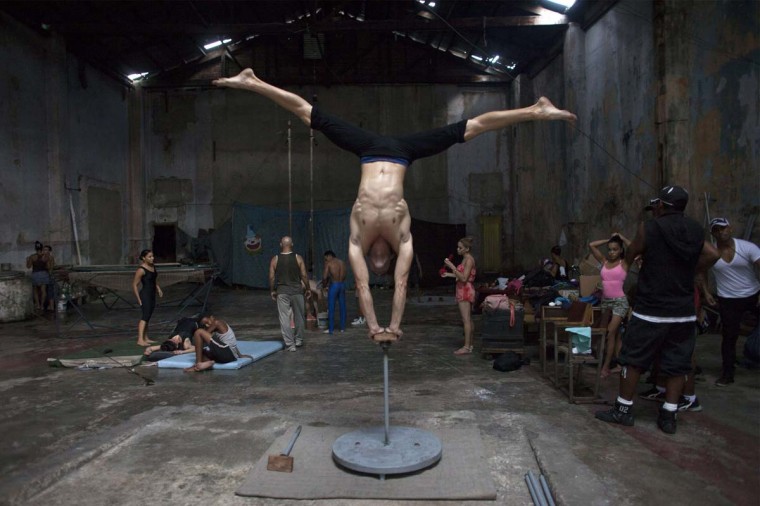 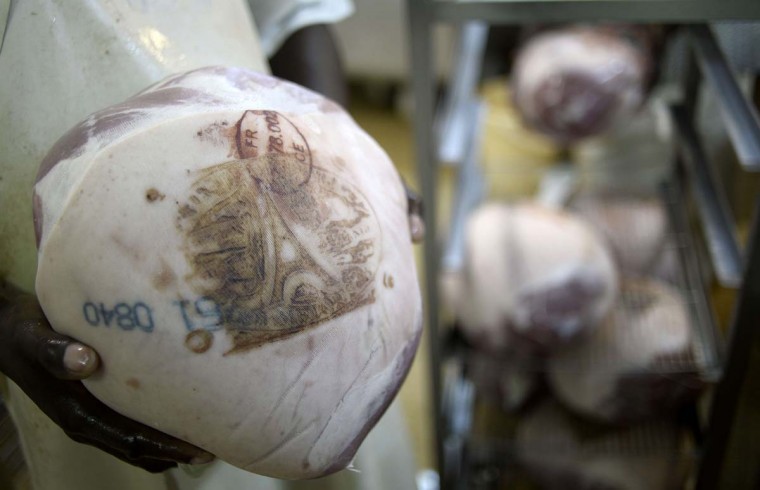 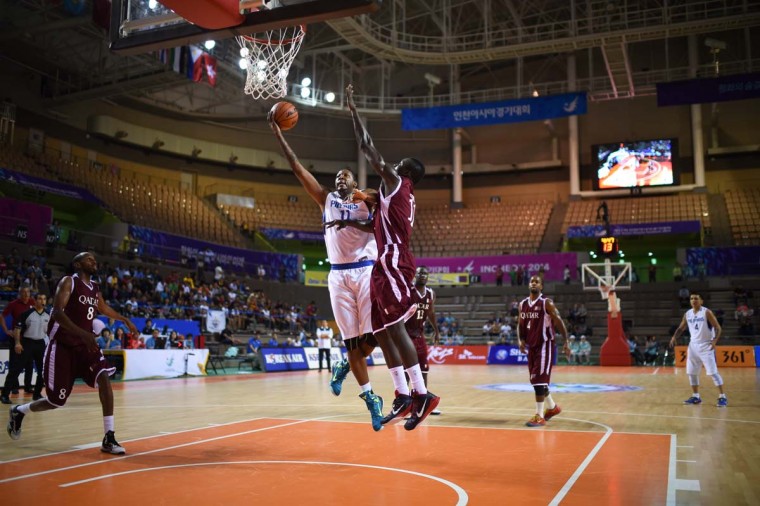 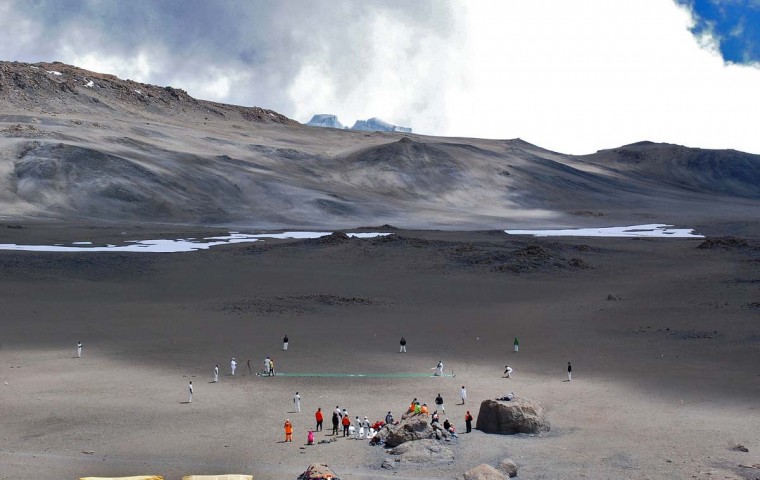 Cricketers play on September 26 on the ice-covered crater of the Kilimanjaro mountain, Tanzania . The game is an attempt to play the world’s highest game of cricket, breaking the previous record set in 2009 on Mount Everest. The attempt comes after a gruelling eight-day trek up the vast extinct volcano, to play a full Twenty 20 game on crater just below its rugged peak at 5,7895 meters (19,000 feet). || CREDIT: PETER MARTELL – AFP/GETTY IMAGES