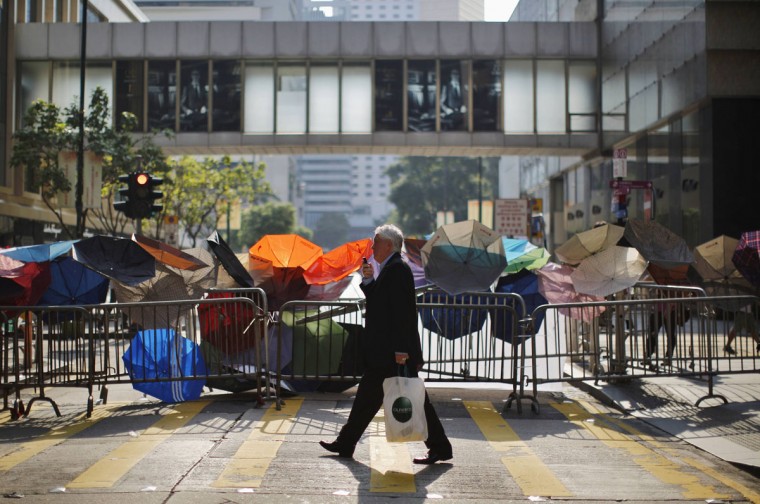 A man walks by a barricade of metal fence and umbrellas on a street at the central financial district, near the government headquarters in Hong Kong September 30, 2014. Tens of thousands of pro-democracy protesters extended a blockade of Hong Kong streets on Tuesday, stockpiling supplies and erecting makeshift barricades ahead of what some fear may be a push by police to clear the roads before Chinese National Day. (REUTERS/Carlos Barria) 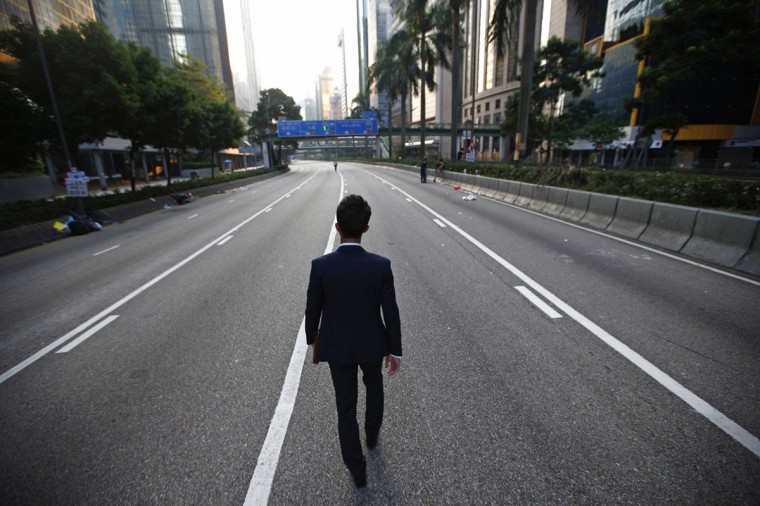 A man walks along an empty street near the central financial district in Hong Kong September 30, 2014. Tens of thousands of pro-democracy protesters extended a blockade of Hong Kong streets on Tuesday, stockpiling supplies and erecting makeshift barricades ahead of what some fear may be a push by police to clear the roads before Chinese National Day. (REUTERS/Carlos Barria) 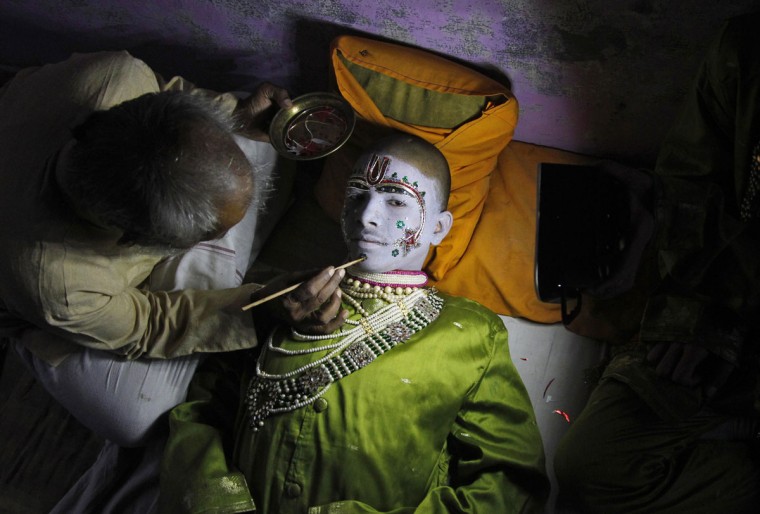 Amit Kumar, 14, a performer, gets makeup applied before performing the role of the Hindu lord Rama in a religious play ahead of Dussehra in the northern Indian city of Allahabad September 30, 2014. Effigies of the 10-headed demon king “Ravana” are burnt on Dussehra, the Hindu festival that commemorates the triumph of Lord Rama over the Ravana, marking the victory of good over evil. (REUTERS/Jitendra Prakash) 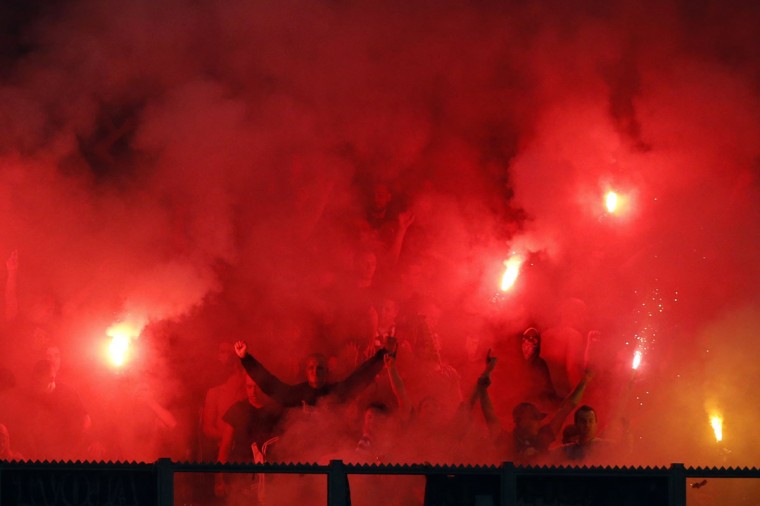 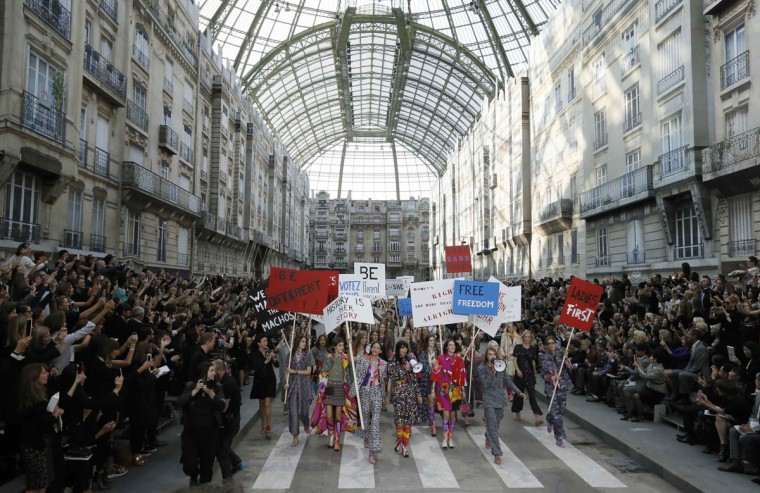 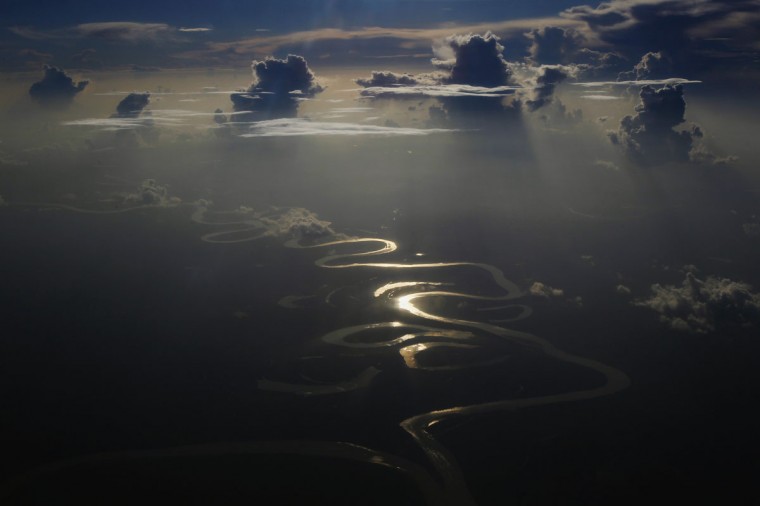 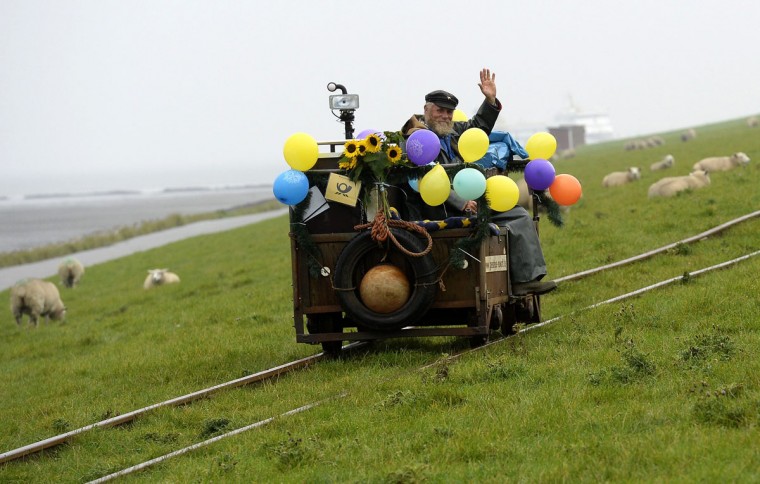 Postman Fiete Nissen, 64, waves as he drives his trolley along the track on his way from the coast of Dagebuell, some 180 kilometers north of Hamburg, to the tiny North Sea islands of Oland and Langeness on his last working-day, September 30, 2014. Nissen was the official postman for the islands’ 139 residents for more than 37 years. (REUTERS/Fabian Bimmer) 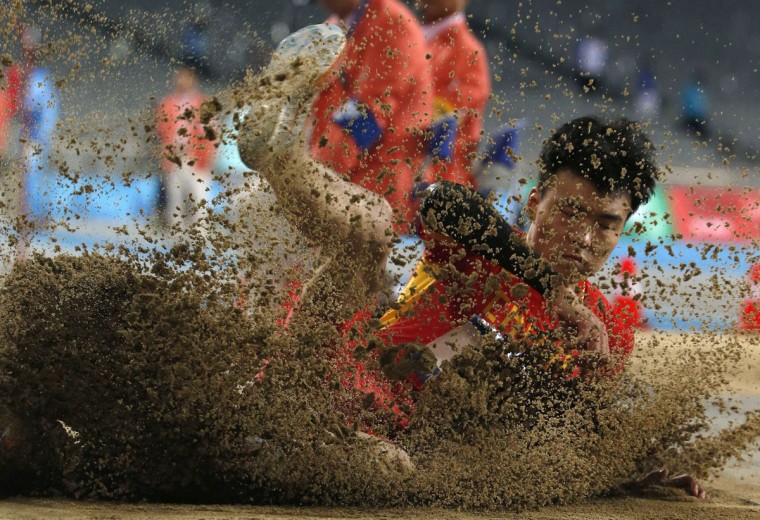 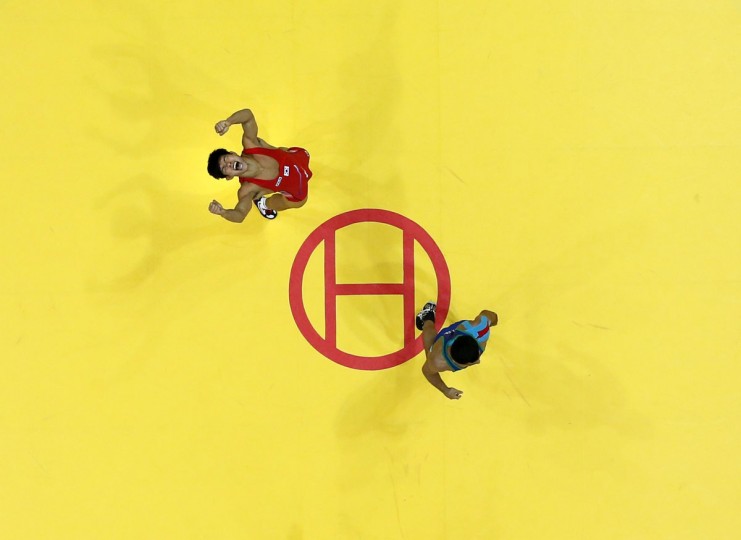 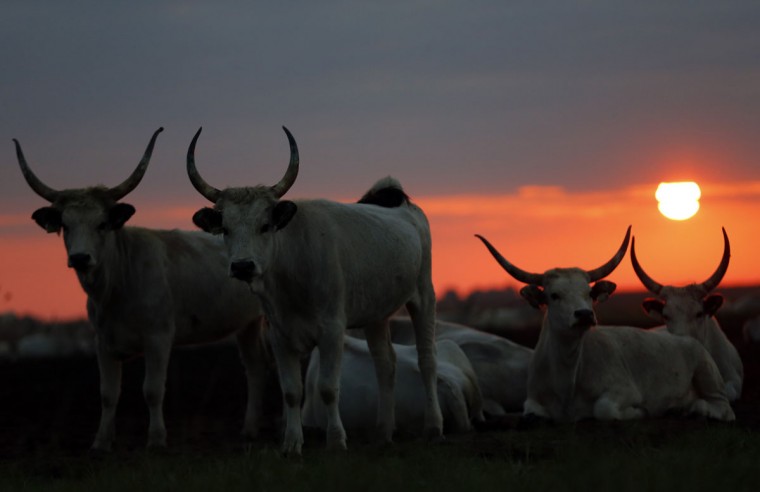 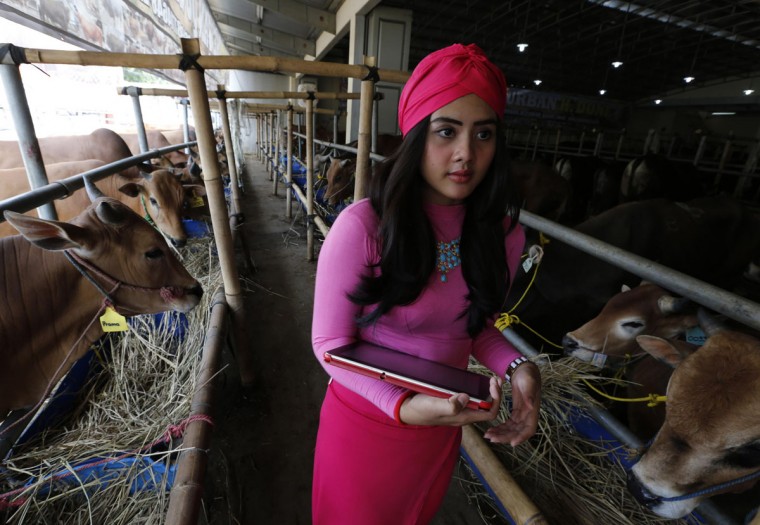 A salesgirl waits for customers as she sells cows for the upcoming Eid al-Adha festival at a cow showroom in Depok, outskirt of Jakarta, September 30, 2014. The cow showroom has adopted a unique way of selling cattle for Eid al-Adha by employing salesgirls to attract customers. According to the owners of the showroom, this has led to an increase in sales since they started employing salesgirls three years ago, having sold around 400 cattle in 2012, 440 in 2013 and 510 this year. Many Muslims around the world will commemorate Eid al-Adha by sacrificing cattle and distributing the meat to the poor. (REUTERS/Beawiharta) 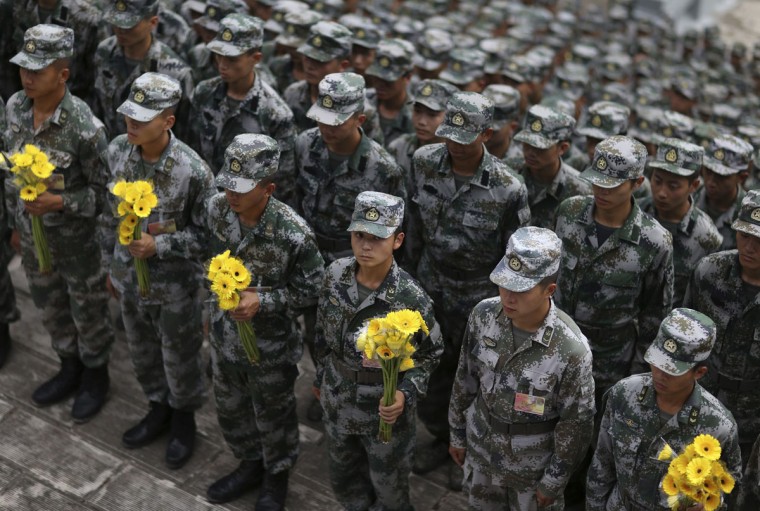 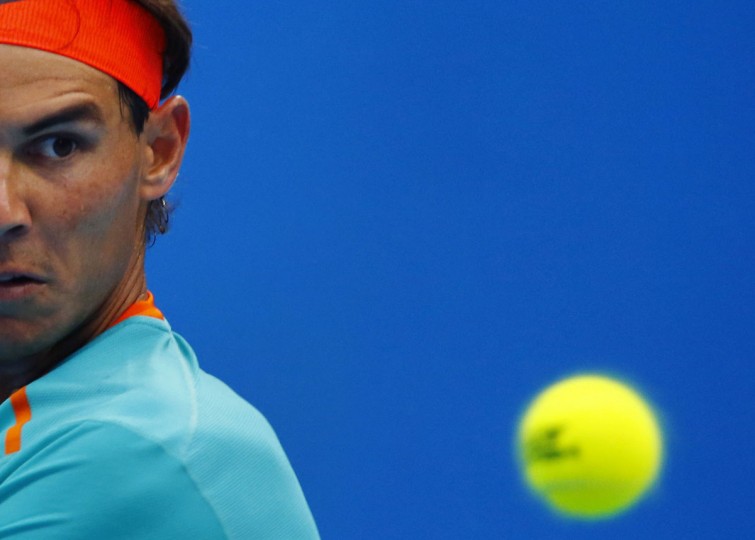 Rafael Nadal of Spain returns a shot to Richard Gasquet of France during their men’s singles match at the China Open tennis tournament in Beijing September 30, 2014. (REUTERS/Petar Kujundzic) 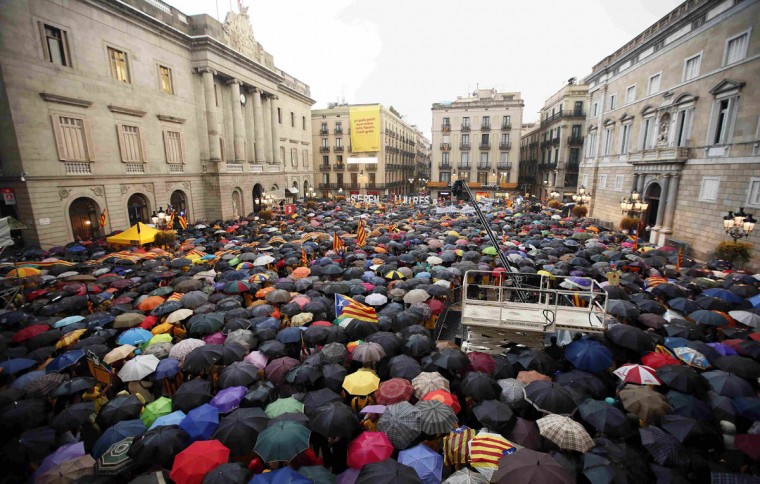 Catalan pro-independence supporters protest against the Spanish Constitutional Court, in front of the Generalitat de Catalunya in Barcelona September 30, 2014. Catalonia’s regional government said on Tuesday it would temporarily suspend formal campaigning for a referendum on independence from Spain, after Madrid filed a legal appeal to stop the vote taking place. Madrid argues that the vote, called by Catalan leader Artur Mas for November 9, would breach Spain’s rule of law because it would be held in Catalonia alone, rather than in the whole of Spain. It filed an appeal on Monday with the Constitutional Court to stop it going ahead, which Catalan officials now want to try and overturn. The words read: “We will be free”. (REUTERS/Albert Gea) 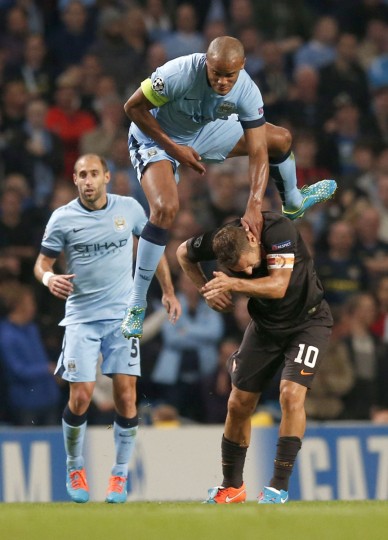 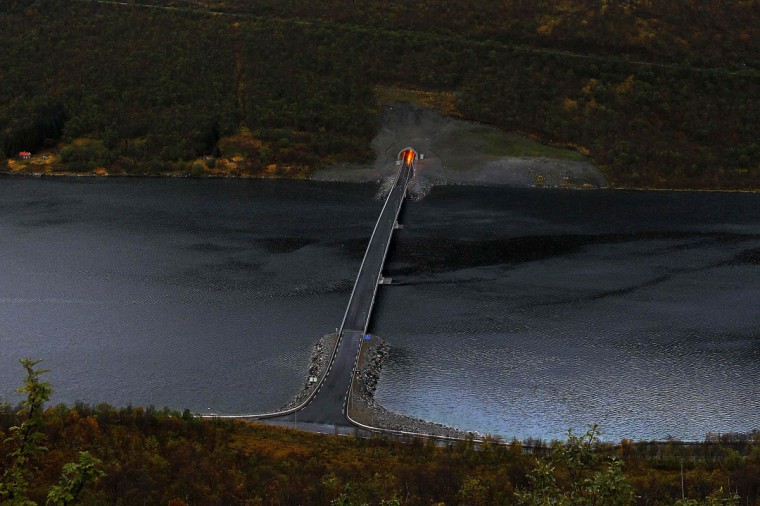 A bridge connects parts of Senja island over a fiord, north of the Arctic Circle in Norway September 29, 2014. (REUTERS/Yannis Behrakis) 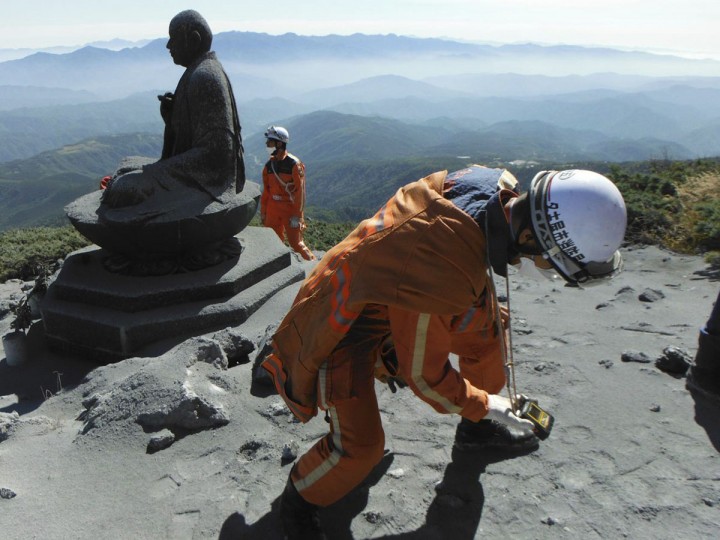 A firefighter checks toxic gas levels during rescue operations near the peak of Mt. Ontake, which straddles Nagano and Gifu prefectures, central Japan, in this handout photograph released by Nagoya City Fire Bureau and taken September 28, 2014. Search and recovery efforts for at least two dozen victims of Japan’s worst volcanic eruption in decades were called off on Tuesday due to worries about rising volcanic activity, including the chance of another steam explosion. Picture taken September 28, 2014. (REUTERS/Nagoya City Fire Bureau/Handout via Reuters) 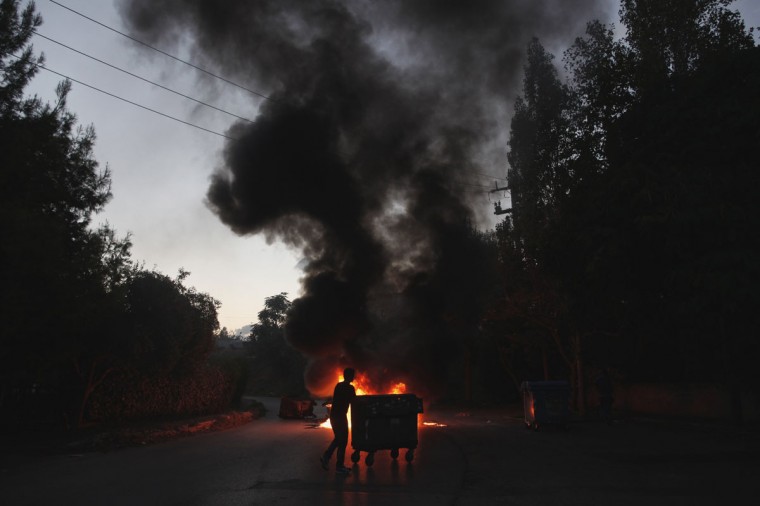 A Greek Roma is silhouetted as he pushes a garbage bin in front of burning tyres, that serve as a barricade to block bulldozers, during a protest in Athens, September 30, 2014. According to local media, a state decision to demolish and transfer a Roma camp from the northern suburb of Halandri, which it has occupied for 40 years, to Megara in West Attica caused members of the Roma community to show their dissatisfaction by torching rubber tyres and blocking traffic. (REUTERS/Alkis Konstantinidis) 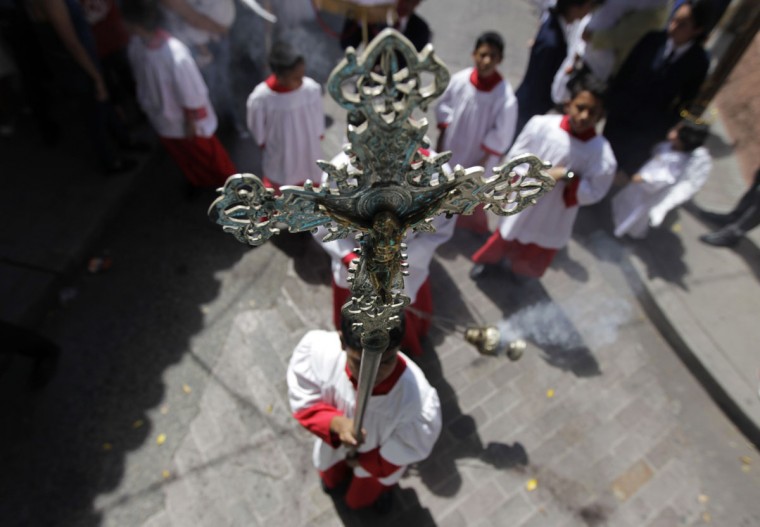 A choir boy holds a cross while another swings an incense censer during a procession in celebration of the 436th anniversary of the founding of Tegucigalpa September 29, 2014. (REUTERS/Jorge Cabrera)