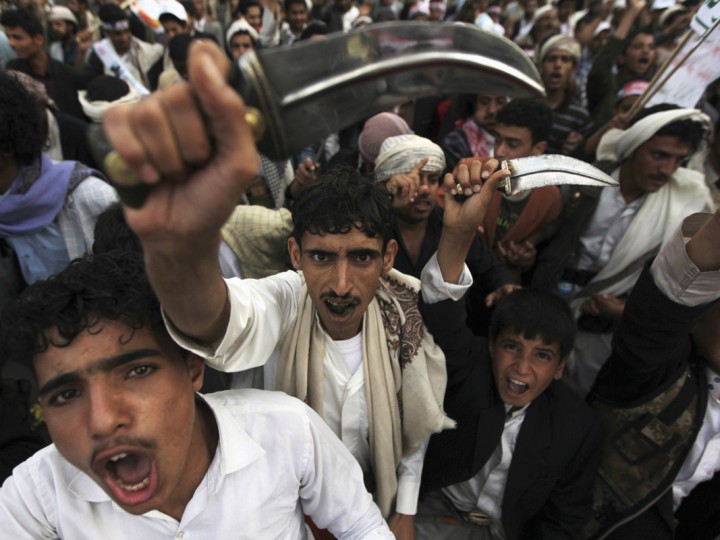 A protester chants slogans, as he waves his janbiya, a traditional dagger, as he marches during a demonstration organized by the Shi’ite Houthi movement to demand the government to rescind a decision to curb fuel subsidies in Sanaa August 21, 2014. Yemen raised fuel prices last month as the impoverished country tries to cut energy subsidies to ease the burden on its budget deficit. (Mohamed al-Sayaghi/Reuters) 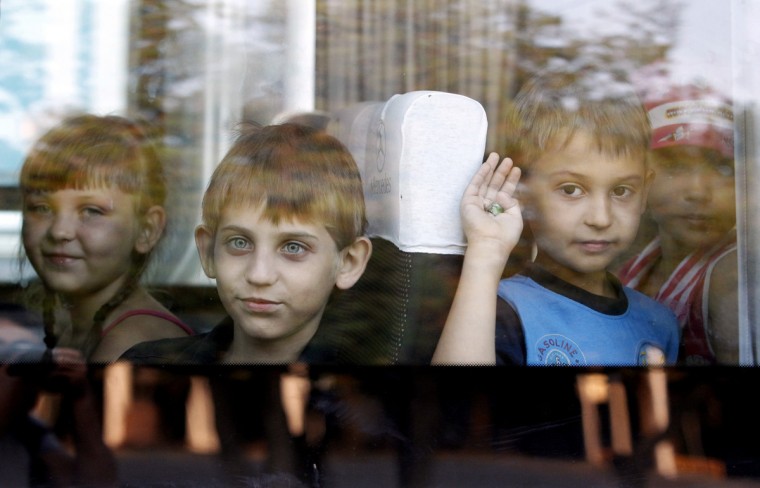 Children who have fled the fighting in eastern regions of Ukraine look out from a mini-bus upon their arrival at a railway station, before leaving for their temporary accommodation, in Stavropol, southern Russia, August 21, 2014. (Eduard Korniyenko/Reuters) 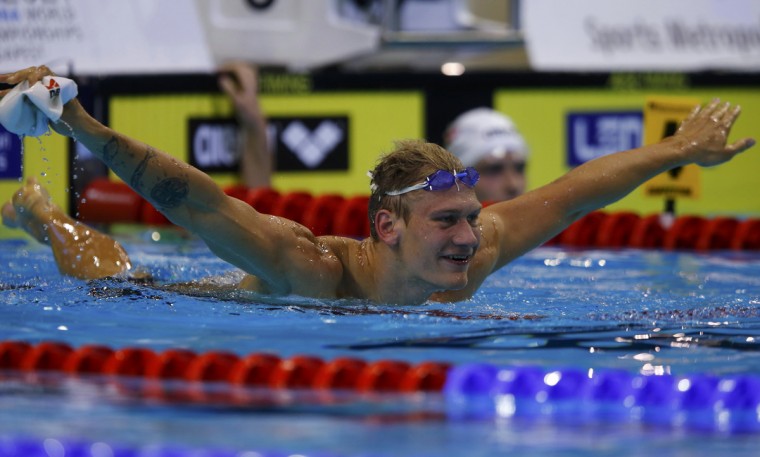 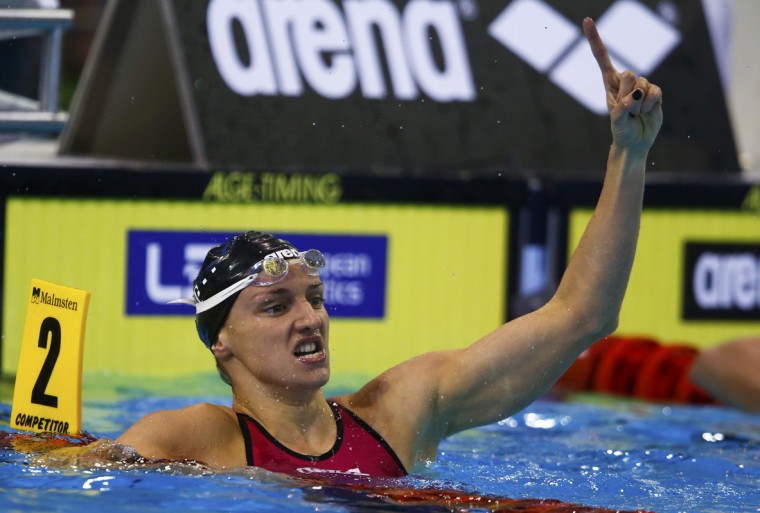 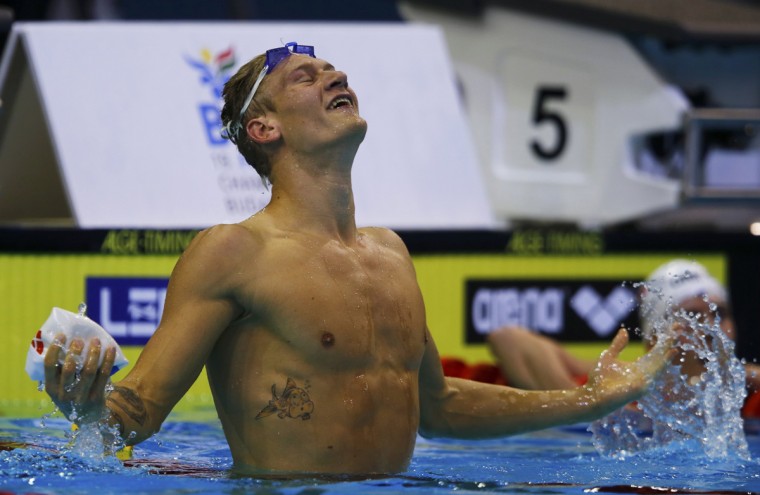 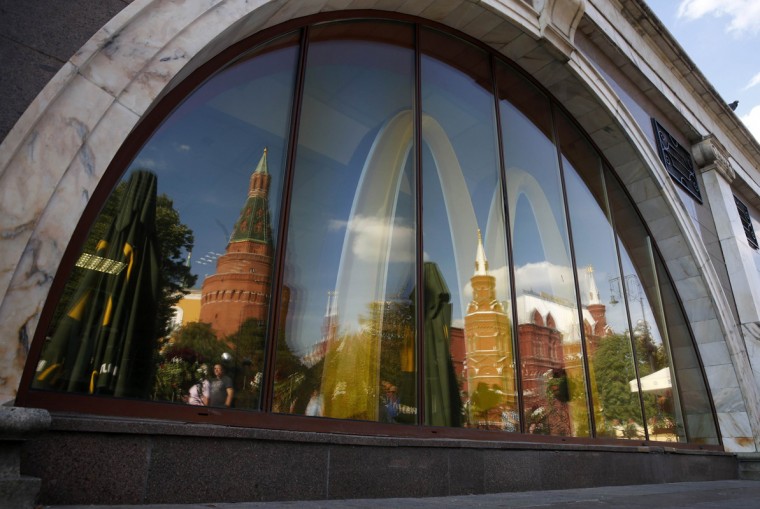 The walls and towers of the Kremlin are reflected in a window of a closed McDonald’s restaurant, one of four temporarily closed by the state food safety watchdog, in Moscow, August 21, 2014. Russia ordered the temporary closure of four McDonald’s restaurants in Moscow on Wednesday, a decision it said was over sanitary violations but which comes against a backdrop of worsening U.S.-Russian ties over Ukraine. (Maxim Zmeyev/Reuters) 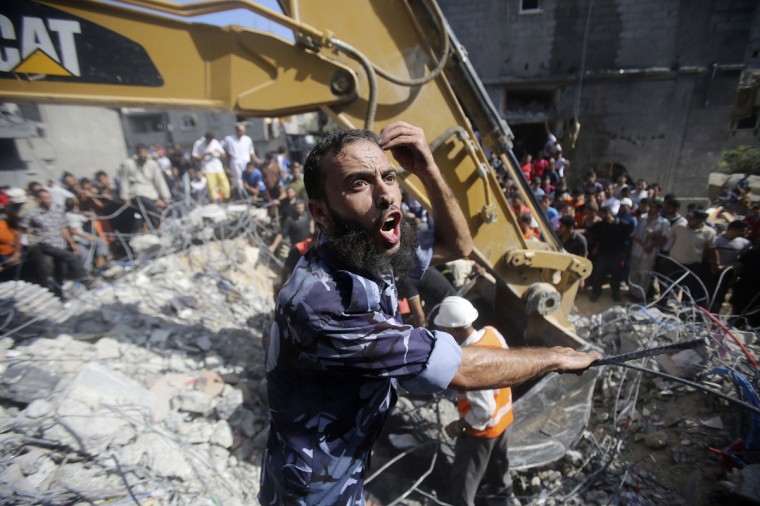 A Palestinian policeman reacts as rescue workers search for victims under the rubble of a house, which witnesses said was destroyed in an Israeli air strike that killed three senior Hamas military commanders, in Rafah in the southern Gaza Strip August 21, 2014. An Israeli air strike killed three senior Hamas military commanders in the Gaza Strip on Thursday, the Islamist group said, the clearest sign yet Israel is focusing its assault on those leading attacks from the Palestinian enclave. The Israeli military had no immediate comment on what would constitute the killing of the most senior Hamas men since it launched its offensive on Gaza six week ago with the declared aim of curbing rocket fire into its territory. (Ibraheem Abu Mustafa/Reuters) 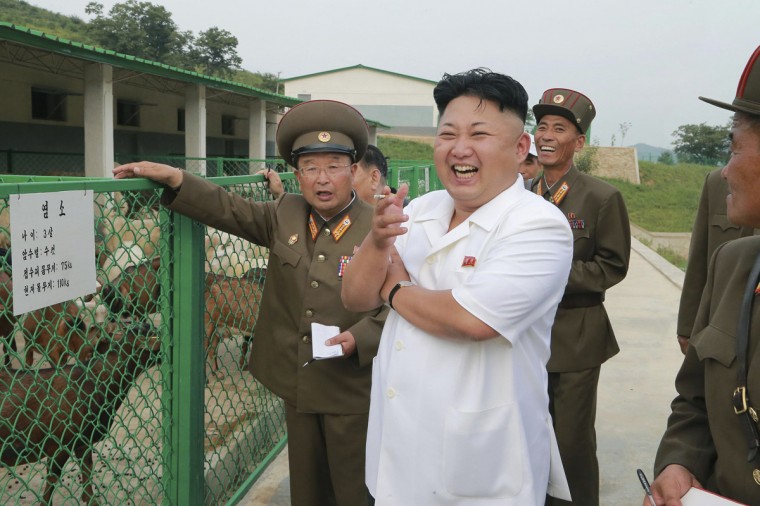 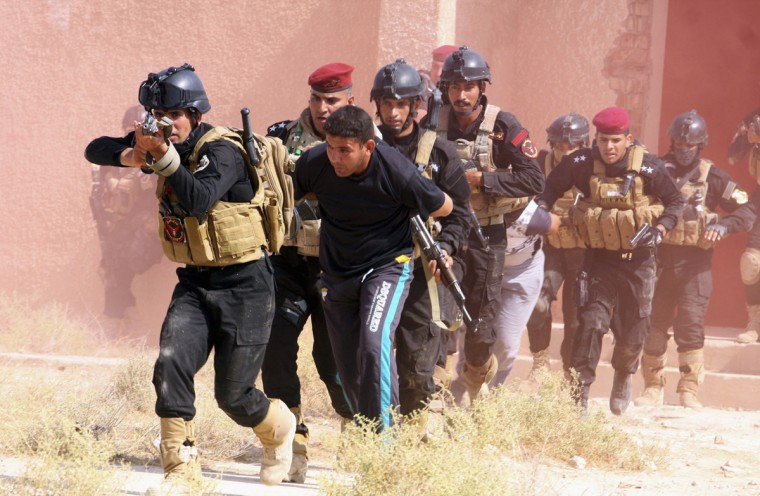 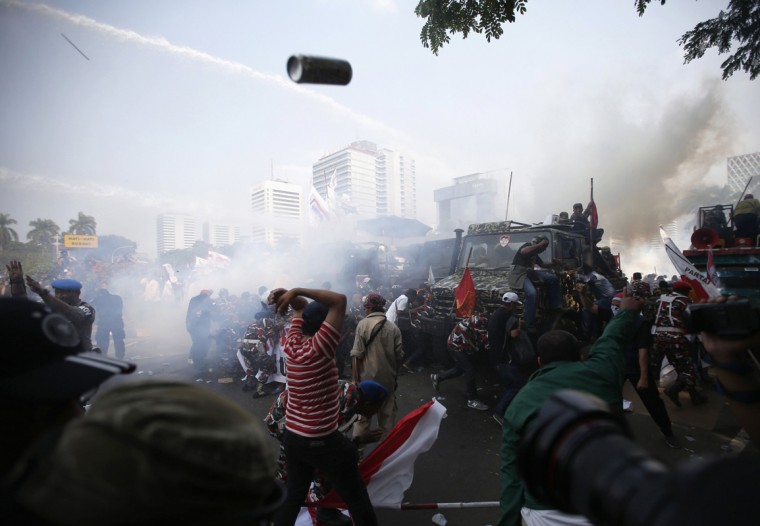 Indonesian police use tear gas and water cannon to disperse supporters of presidential candidate Prabowo Subianto during a protest near the Constitutional Court in Jakarta August 21, 2014. Indonesia’s Constitutional Court is expected to announce its verdict today on losing presidential candidate Prabowo Subianto’s appeal against the outcome of last month’s election. (Darren Whiteside/Reuters) 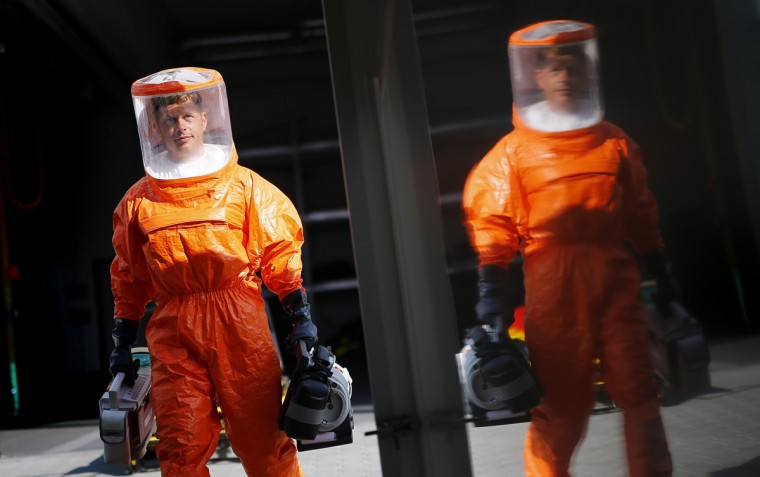 A fire brigade paramedic wearing a sealed protective suit is reflected in a special fire brigade ambulance, as he carries medical equipment into the vehicle during a drill for the crew, in Frankfurt August 21, 2014. The special ambulance is equipped to treat patients suffering from ebola and other highly infectious diseases. Ebola is one of the deadliest diseases known to humanity. It has no proven cure and there is no vaccine to prevent infection. The rigorous use of quarantine is needed to prevent its spread, as well as high standards of hygiene for anyone who might come into contact with the disease. (Kai Pfaffenbach/Reuters) 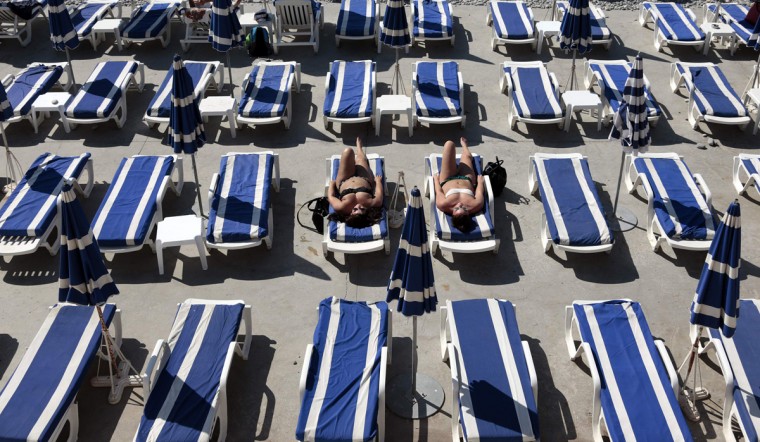 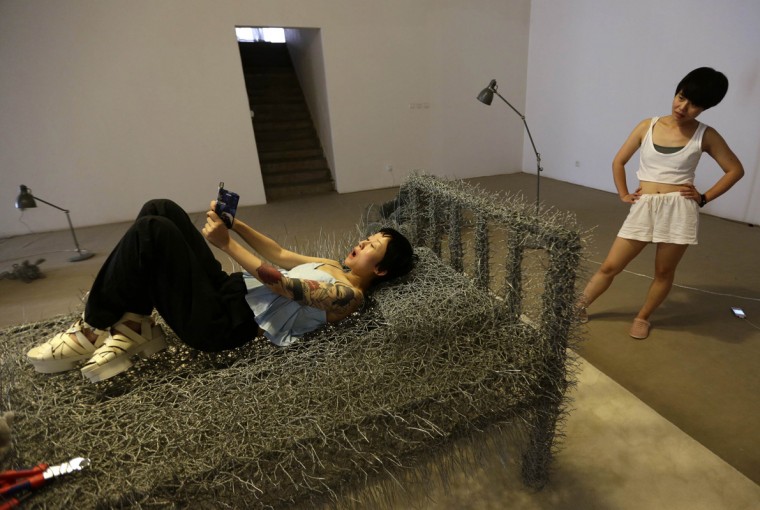 Chinese artist Zhou Jie (R) looks at her friend who is taking a “selfie” on an unfinished iron wire bed, one of Zhou’s sculptures, while visiting her at Beijing Art Now Gallery, in Beijing August 11, 2014. Zhou started her art project titled “36 Days” on August 9, in which she would live inside an exhibition hall with an unfinished iron wire bed, some iron wire sculptures in the shape of stuffed animal dolls, a certain amount of food and her mobile phone, for 36 days. The entire process is open to visitors and she may also interact with them, according to Zhou. Picture taken August 11, 2014. (Jason Lee/Reuters) 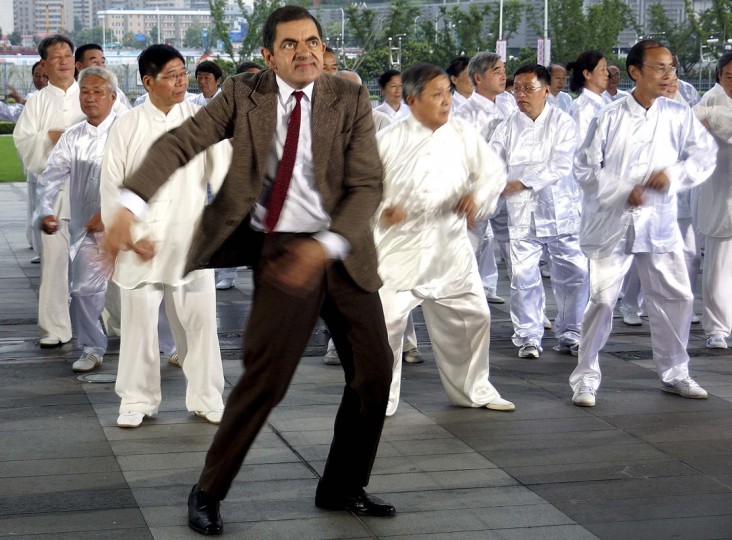 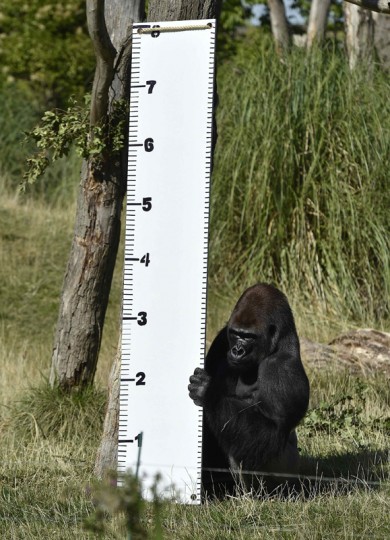 “Kimbuka”, a western lowland gorilla holds a height chart that was placed in his enclosure at London Zoo in London August 21, 2014. The annual weigh-in which includes waist and height measurements is conducted for the general wellbeing of the animals, and to help detect pregnancies of endangered species as part of the Zoo’s international breeding programmes. (Toby Melville/Reuters) 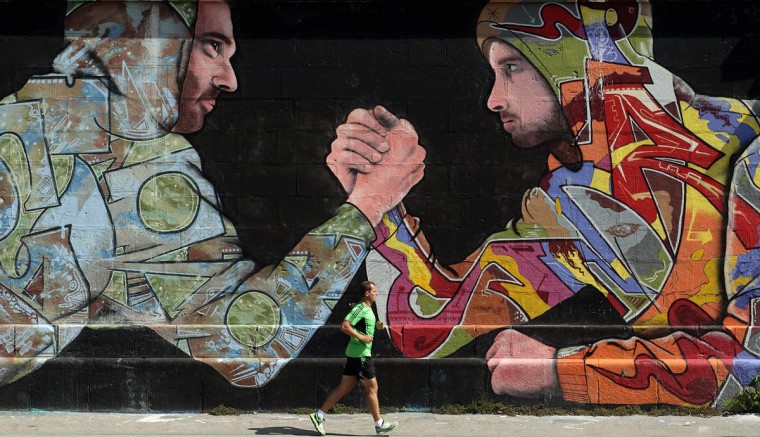 A jogger runs past a mural on a wall on a sunny summer day in Vienna, August 21, 2014. (Heinz-Peter Bader/Reuters)

« “InstaMeet” at the Baltimore National Aquarium » Clinging to life, a 10-year-old Ebola victim