Red on brides for luck, fire from the deep in China, violence in fighting zones | August 11 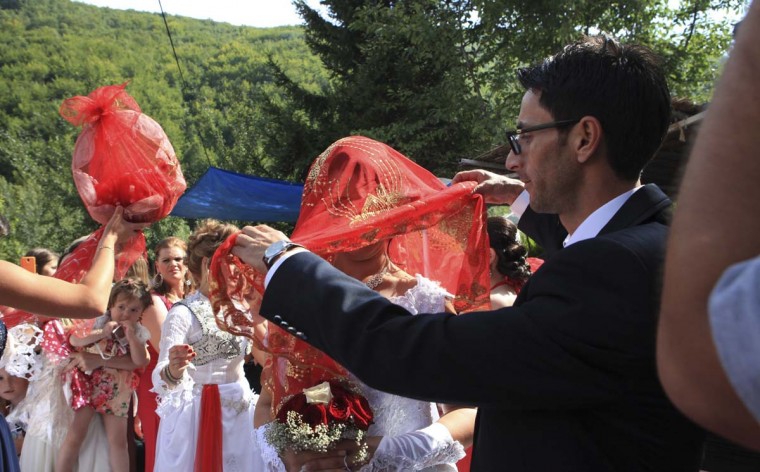 The groom Burim Jonuzi removes a red headscarf from his bride Vlora during their wedding in the village of Nerodime, southwest of the capital Prishtina August 9. Vlora wore a red headscarf to symbolize good health and protection against evil. In Kosovo, summer is a popular season to get married. || PHOTO CREDIT: HAZIR REKA – REUTERS 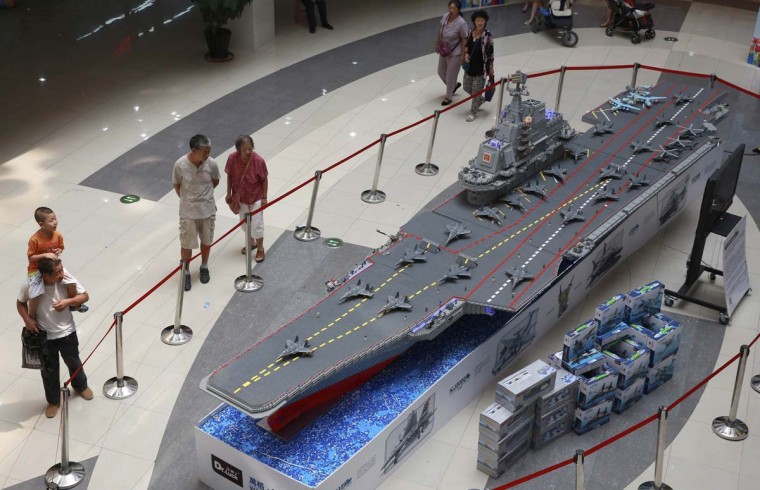 People look at a replica of Chinese aircraft carrier “Liaoning” made of toy building blocks, on display at a shopping mall in Shenyang, Liaoning province August 10. The replica, which measures 9-metres-long, 1.78-metres-wide and 1.6-metres-high, was made using a total of 443,800 pieces of toy blocks and took six people 180 days to finish, local media reported. Picture taken August 10, 2014. || PHOTO CREDIT: STRINGER – REUTERS 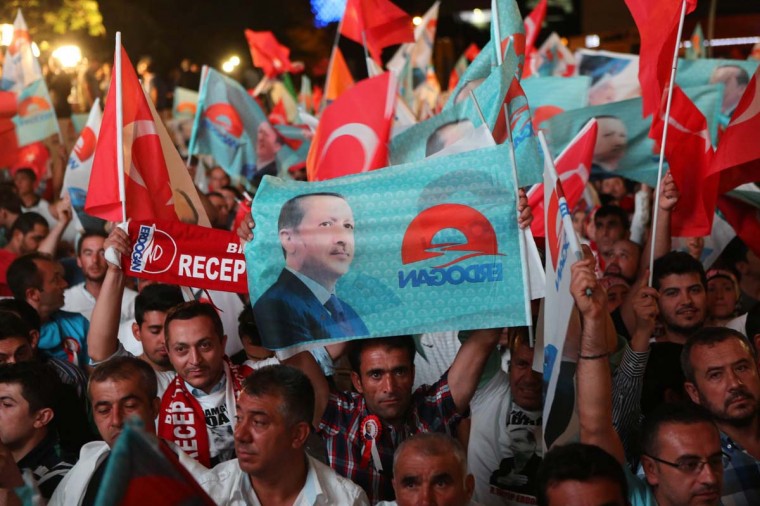 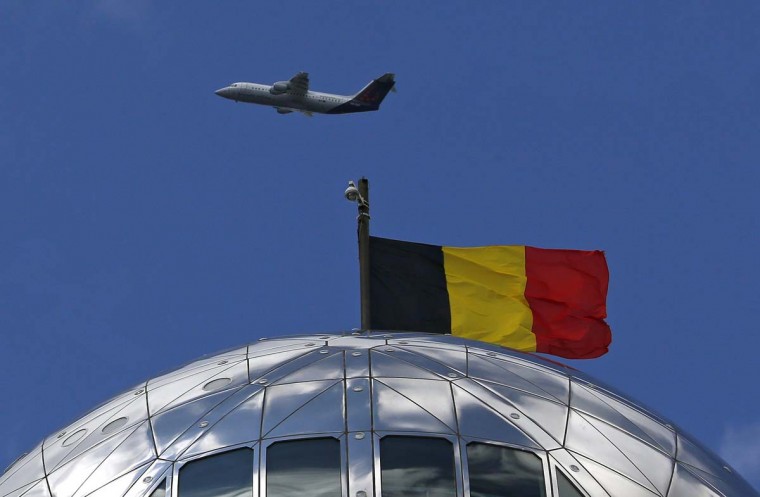 An airplane flies over the spheres of the Atomium monument in Brussels August 11. The 102-metre-tall (335-feet-tall) structure and its nine spheres, which was designed for Expo 58, is in the shape of a unit cell of an iron crystal, magnified about 165 billion times. || PHOTO CREDIT: YVES HERMAN – REUTERS 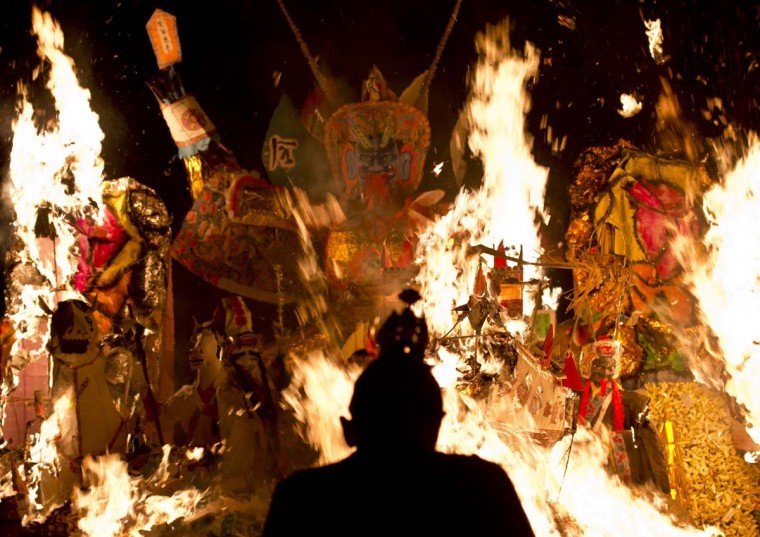 An Ethnic Chinese priest stands in front of statue made of paper of Chinese deity ‘Da Shi Ye’ or Guardian God of Ghosts set of fire by devotees during the Hungry Ghost festival in Kuala Lumpur, late on August 10. The festival, celebrated in the seventh lunar month of the Chinese new year calendar among communities in southern China, Malaysia, Singapore, HongKong and Taiwan, marks the belief that the ‘Gates of Hell’ are opened to let out the hungry ghosts who then wander in the land of the living while foraging for food. During the festival, food offerings are made while paper money and joss sticks are burnt outside homes to keep the spirits of dead ancestors happy and to bring good luck. || CREDIT: MANAN VATSYAYANA – AFP/GETTY IMAGES 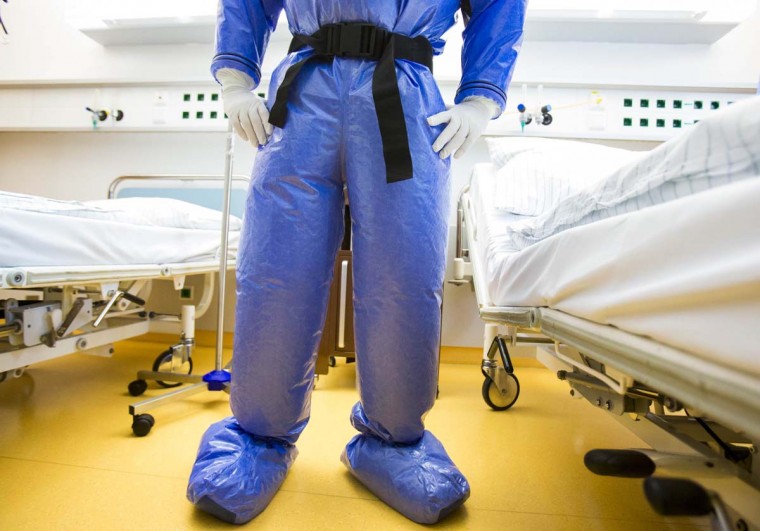 Ward physician Thomas Klotzkowski stands in a sick unit at the quarantine station for patients with infectious diseases at the Charite hospital in Berlin August 11. The isolation ward at the Charite is one of several centres in Germany equipped to treat patients suffering from ebola and other highly infectious diseases, the clinic’s doctor for tropical medicine Florian Steiner said. Ebola is one of the deadliest diseases known to humanity. It has no proven cure and there is no vaccine to prevent infection. The most effective treatment involves alleviating symptoms that include fever, vomiting and diarrhoea. The rigorous use of quarantine is needed to prevent its spread, as well as high standards of hygiene for anyone who might come into contact with the disease. || PHOTO CREDIT: THOMAS PETER – REUTERS 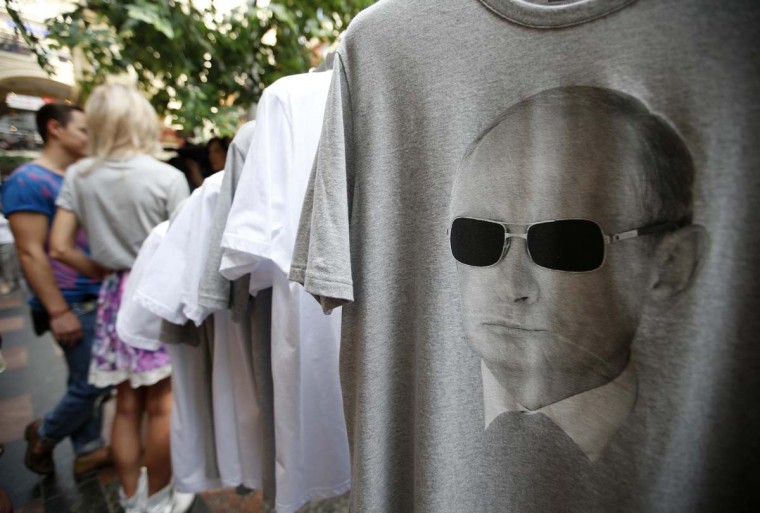 T-shirts which are printed with images of Russia’s President Vladimir Putin, are on sale at GUM department store in central Moscow, August 11. Creators of the new collection, which went on sale Monday after an earlier batch sold in June was well-received, produced the T-shirts as they were inspired by triumphs of Russian sportsmen at the Sochi 2014 Olympics, the Paralympic Winter Games and the 2014 Men’s Ice Hockey World Championship, as well as Russia’s annexation of Crimea, according to local media. || PHOTO CREDIT: MAXIM ZMEYEV – REUTERS 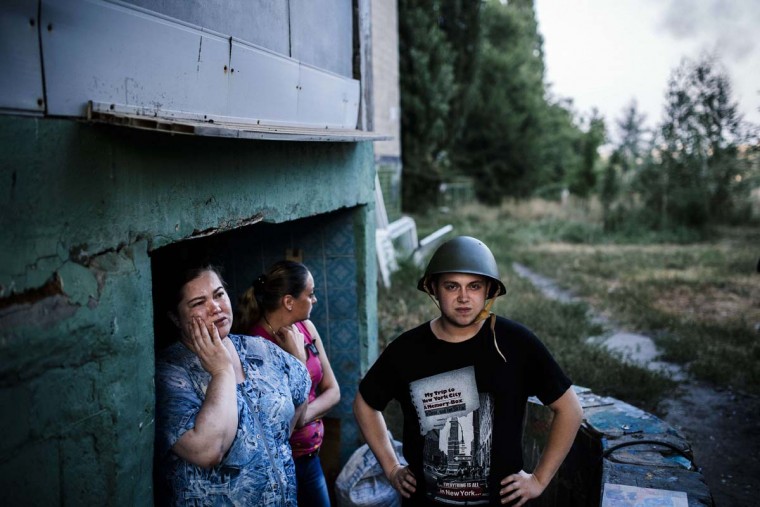 People stand at the entrance of a makeshift bomb shelter in Donetsk, on August 10. Artillery pounded the surrounded main rebel bastion of Donetsk in east Ukraine Sunday as the West warned Russia that any attempt to send “humanitarian” troops into the conflict-torn region would be deemed “unacceptable.” Shelling meanwhile continued throughout the night and into Sunday in Donetsk, a one-million strong city that rebels now say has been surrounded by Ukrainian forces. || CREDIT: DIMITAR DILKOFF – AFP/GETTY IMAGES 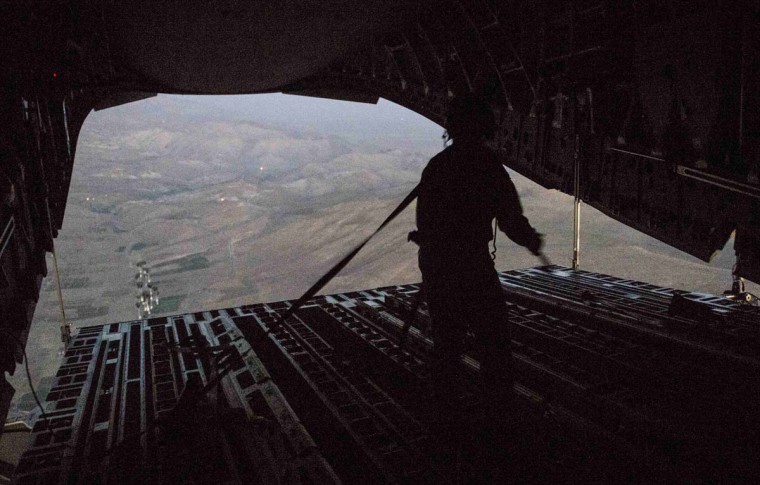 Tech. Sgt. Lynn Morelly, 816th Expeditionary Airlift Squadron, C-17 Globemaster III loadmaster, watches bundles of halal meals parachute to the ground over Iraq in this August 9 photo released on August 10. A flood of food-drop photos was released to wire services by the military, and the US Mission to NATO account on Twitter was full this morning of images from what it termed a “humanitarian” mission in the region. Critics like British columnist Robert Fisk were more skeptical, foreseeing another lengthy military campaign by Western countries intent on keeping access to Kurdish oil resources. || PHOTO CREDIT: VERNON YOUNG JR./U.S. AIR FORCE/HANDOUT – REUTERS 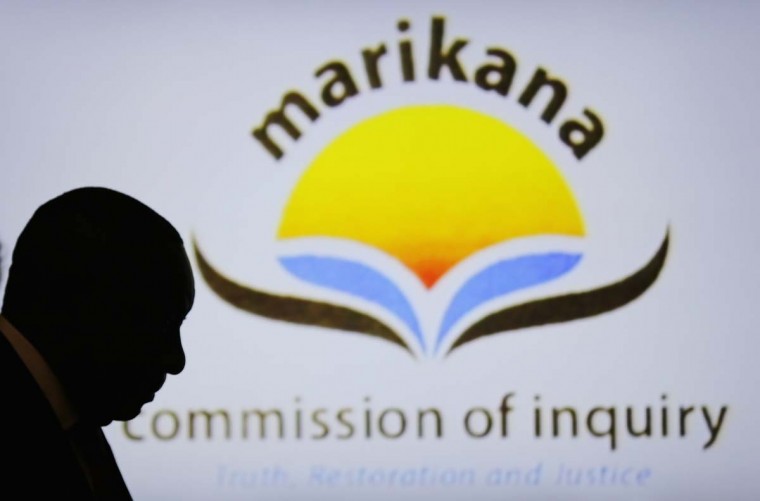 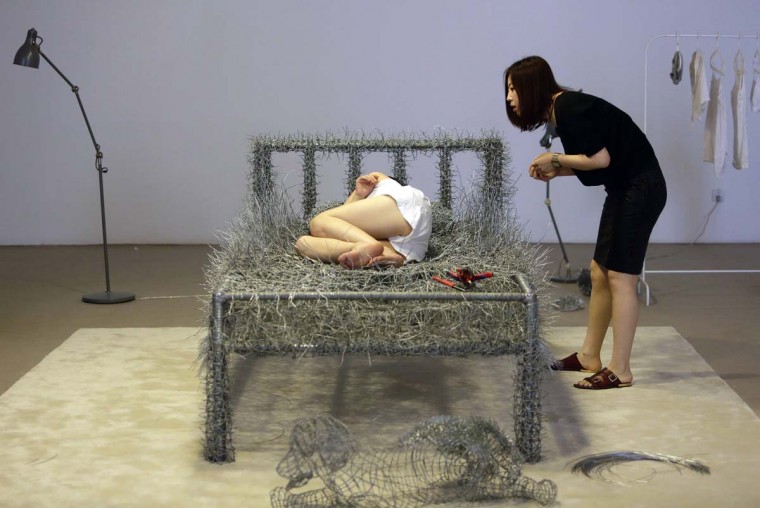 Chinese artist Zhou Jie takes a nap on an unfinished iron wire bed, one of her sculpture works, after lunch as a friend of hers looks on at Beijing Now Art Gallery, in Beijing August 11. Zhou started her art project titled “36 Days” on August 9, in which she would live inside an exhibition hall with an unfinished iron wire bed, some iron wire sculptures in the shape of stuffed animal dolls, a certain amount of food and her mobile phone, for 36 days. The entire process is open to visitors and she may also interact with them, according to Zhou. || PHOTO CREDIT: JASON LEE – REUTERS 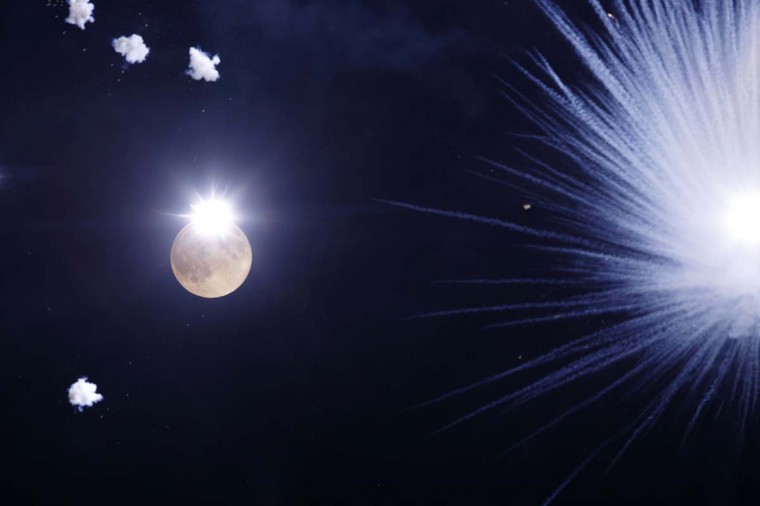 Fireworks explode in front of the supermoon outside the town of Mosta, celebrating the feast of its patron saint, in central Malta, August 10. The astronomical event occurs when the moon is closest to the Earth in its orbit, making it appear much larger and brighter than usual. || PHOTO CREDIT: DARRIN ZAMMIT LUPI – REUTERS 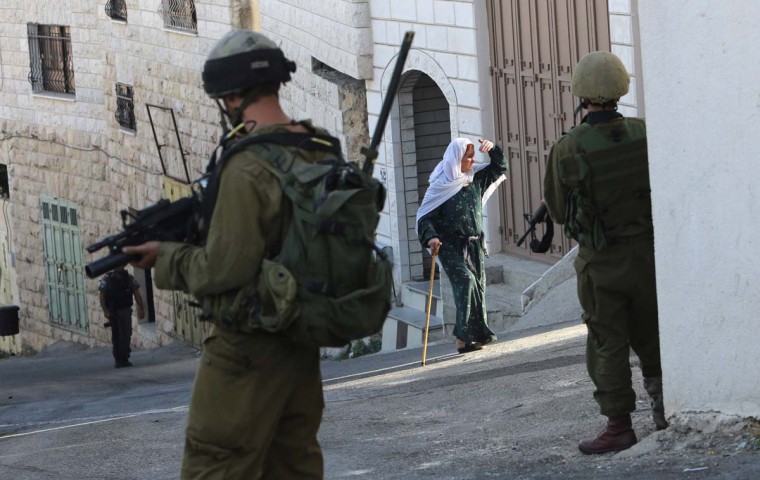 A Palestinian woman walks next to Israeli soldiers standing guard during a raid on the house of Palestinian man Zakaria al-Aqra near the West Bank city of Nablus August 11. Israeli troops killed Zakaria al-Aqra in the occupied West Bank on Monday during a raid on his house, local medical officials said. An Israeli military spokeswoman said she was aware of troop activity in the area but initially had no further details. Local witnesses said al-Aqra, 23, was wanted by Israel and had been shot dead. Six other people were wounded. Part of al-Aqra’s house was destroyed by an army bulldozer, they said. As of Monday morning, 1,938 Palestinians and 67 Israelis had been killed in the month of fighting, according to Reuters. || PHOTO CREDIT: ABED OMAR QUSINI – REUTERS 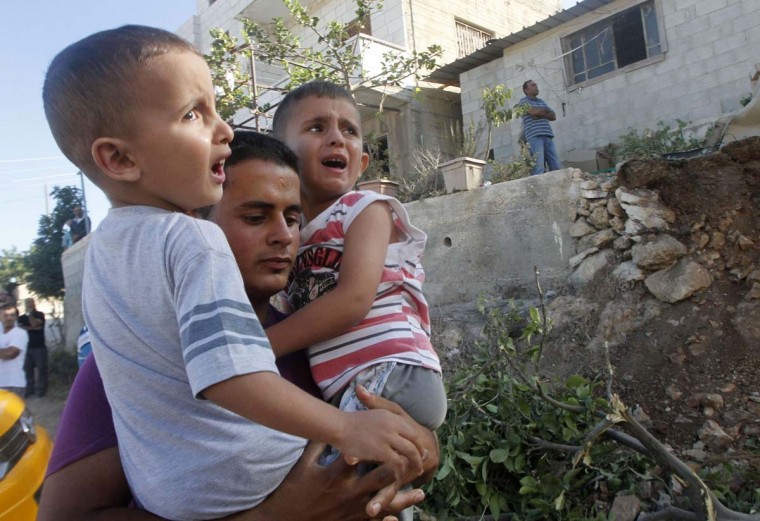 Palestinian boys are evacuated from their family’s house, the house of Palestinian man Zakaria al-Aqra (not seen), following a raid by Israeli troops near the West Bank city of Nablus August 11. Israeli troops killed Zakaria al-Aqra in the occupied West Bank on Monday during a raid on his house, local medical officials said. An Israeli military spokeswoman said she was aware of troop activity in the area but initially had no further details. Local witnesses said al-Aqra, 23, was wanted by Israel and had been shot dead. Six other people were wounded. Part of al-Aqra’s house was destroyed by an army bulldozer, they said. As of Monday morning, 1,938 Palestinians and 67 Israelis had been killed in the month of fighting, according to Reuters. || PHOTO CREDIT: ABED OMAR QUSINI – REUTERS 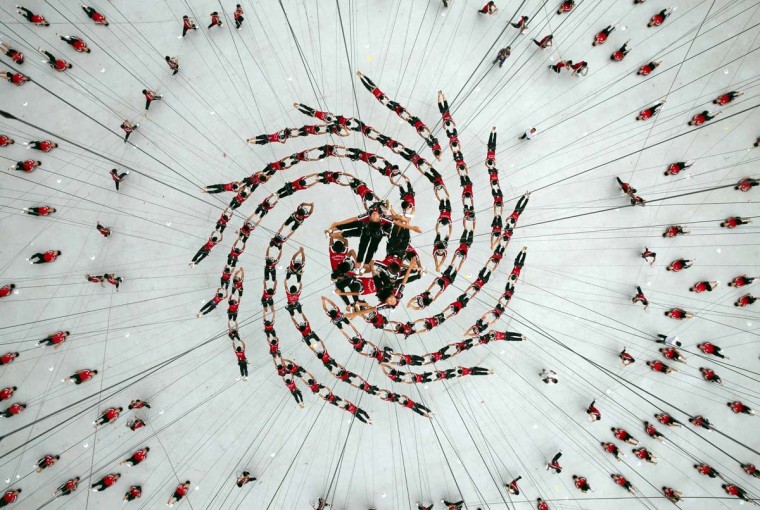 Students of Shaolin Tagou Martial Arts School are suspended in mid-air as they practise in a rehearsal for a stunt performance which is part of the opening ceremony of the 2014 Nanjing Youth Olympic Games, at a stadium in Nanjing, Jiangsu province August 9. A total of 520 students took part in the performance named “building the dream”, which will be performed during the opening ceremony of the Youth Olympic Games on August 16, 2014, local media reported. Picture taken August 9, 2014. || PHOTO CREDIT: STRINGER – REUTERS

« The Rat Catchers of New York » The 2014 Howard County Fair