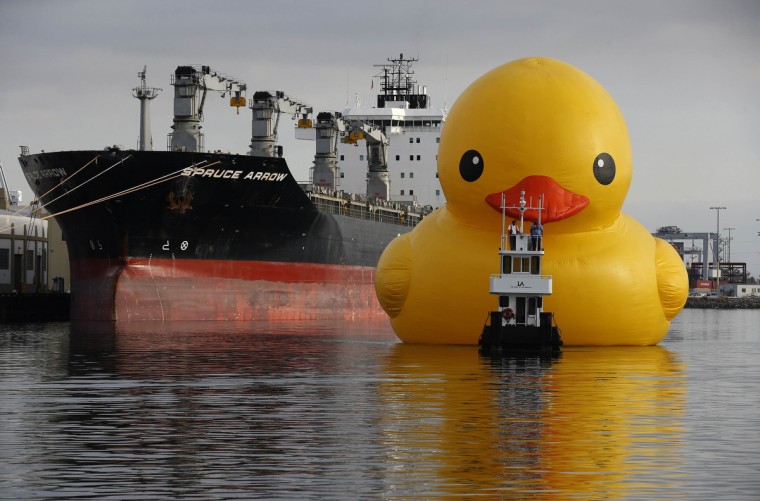 A giant inflatable rubber duck installation by Dutch artist Florentijn Hofman floats through the Port of Los Angeles as part of the Tall Ships Festival, in San Pedro, California. The creation, which is five stories tall and five stories wide, has been seen floating in various cities around the world since 2007. (Lucy Nicholson/Reuters) 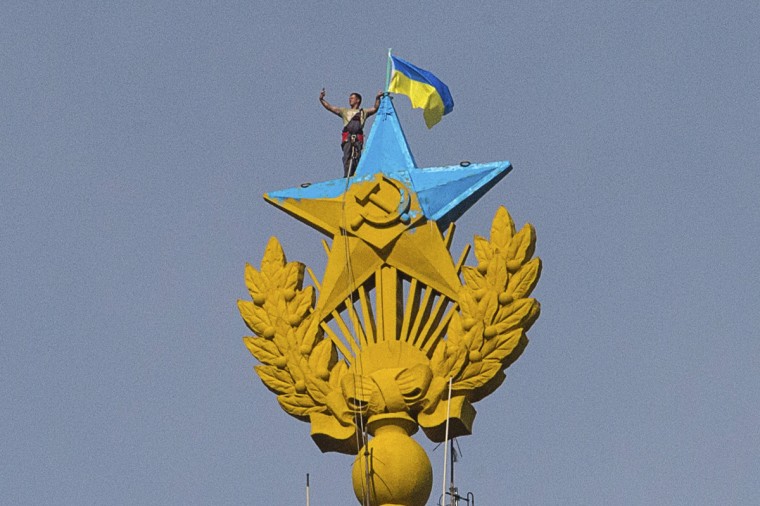 A man takes a “selfie” as he stands with a Ukrainian flag on a Soviet-style star re-touched with blue paint so it resembles the yellow-and-blue national colors of Ukraine, atop the spire of a building in Moscow. Russian police said on Wednesday they had charged four young people with vandalism after they climbed to the top of a Moscow skyscraper and briefly attached a Ukrainian flag to its spire. (Ilya Varlamov/Reuters) 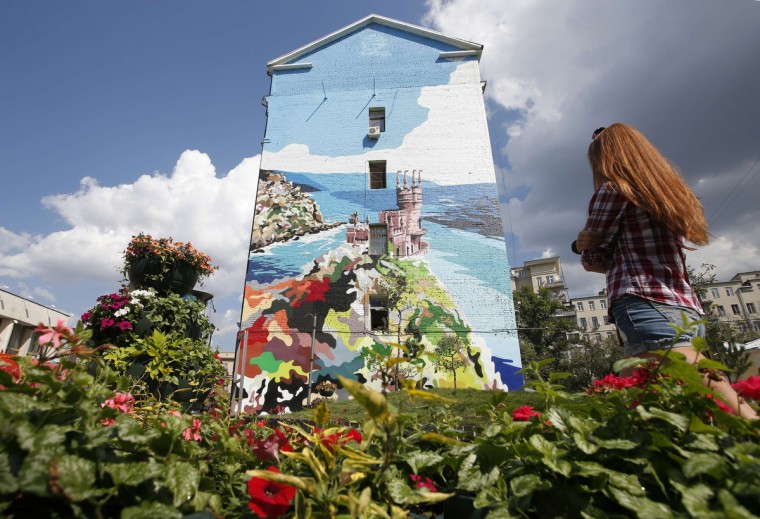 A woman walks past a mural on the side of a building which depicts the Swallow’s Nest castle overlooking the Black Sea outside the Crimean town of Yalta, in Moscow. (Maxim Zmeyev/Reuters) 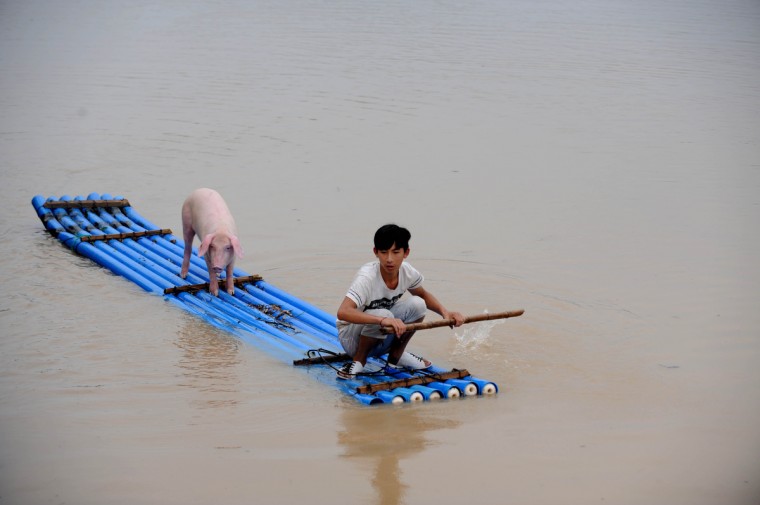 A victim makes his way through flood water on a makeshift raft in Lishui, east China’s Zhejiang province after days of heavy rainfall. More than 20,000 residents have been evacuated due to the flood as the water level in Ou river keeps rising during the storms, local media reported. (Getty Images) 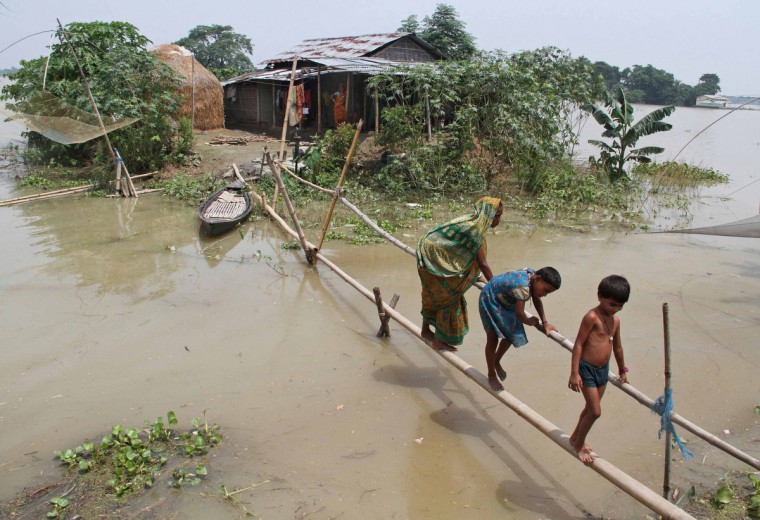 Villagers use a makeshift bamboo bridge to move across flooded areas of Morigaon district in the northeastern Indian state of Assam . The latest heavy rains have caused landslides and floods in many parts of India and Nepal, where at least 90 people have been killed since Thursday. (Reuters) 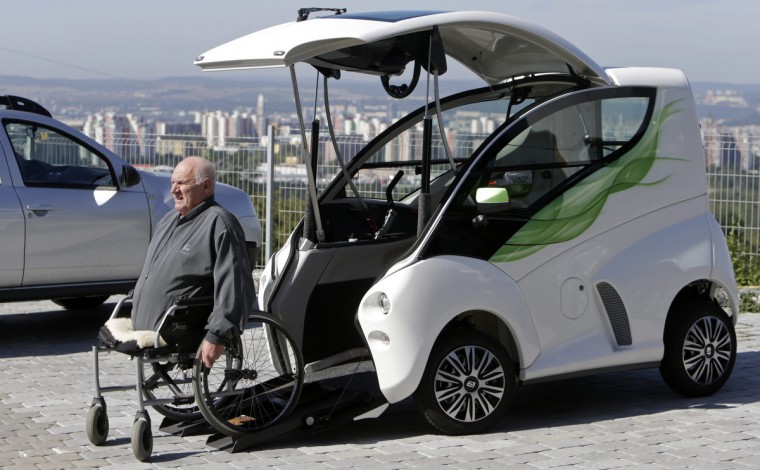 Frantisek Trunda, 67, who lost his legs in 2006, moves himself into his Elbee vehicle while seated on a wheelchair in Brno. The Elbee is a vehicle designed specifically for wheelchair-bound people, and allows them to drive the vehicle without needing to get off their wheelchair or receive assistance from another person. The vehicle stretches 248 centimetres long and 133 centimetres wide, allowing it to be parked vertically on a pedestrian zone for easier boarding and exit from buildings. Factory production of the first batch of Elbee vehicles started this year after completing initial road tests and homologation from local authorities received in 2010. (David W Cerny/Reuters) 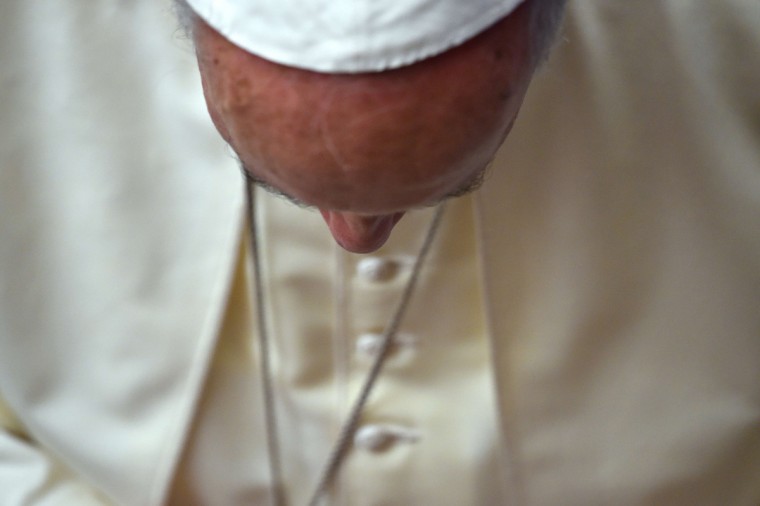 Pope Francis is pictured as he leaves after his general audience in the Paul VI hall at the Vatican. (Gabriel Bouys/Getty Images) 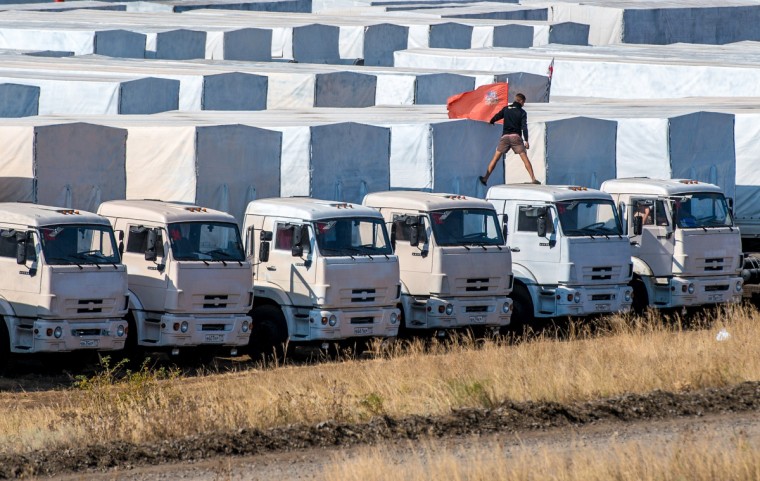 A driver installs a red flag on his lorry, parked with other lorries of the Russian humanitarian convoy not far from a checkpoint at the Ukrainian border some 30 km outside the town of Kamensk-Shakhtinsky in the Rostov region. A tension between Moscow and Kiev simmering over Russia’s decision to try and deliver what it claims to be a huge humanitarian aid convoy that the Ukrainian authorities fear may be used to smuggle in arms to the pro-Kremlin insurgents. (Dmitry Serebrayakov/Getty Images) 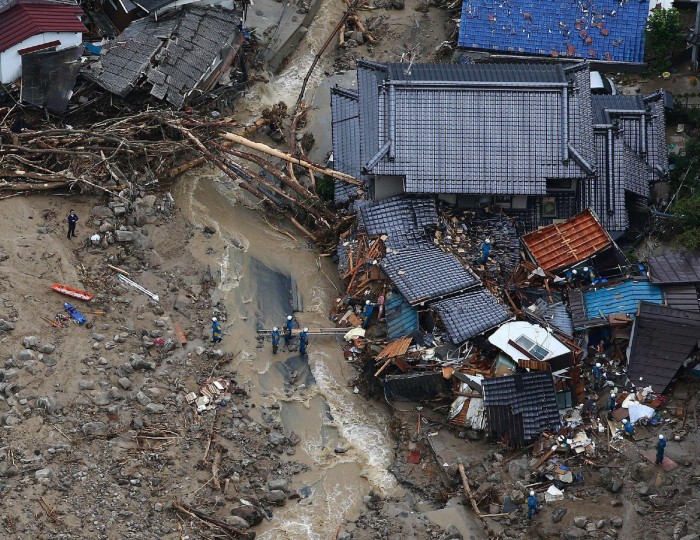 This aerial view shows rescue workers looking for survivors at the site of a landslide after heavy rains hit the city of Hiroshima, western Japan. The number of people known to have died when a hillside collapsed in western Japan has hit 27, the government said on August 20, with a further 10 people still unaccounted for. (Jiji Press/Getty Images) 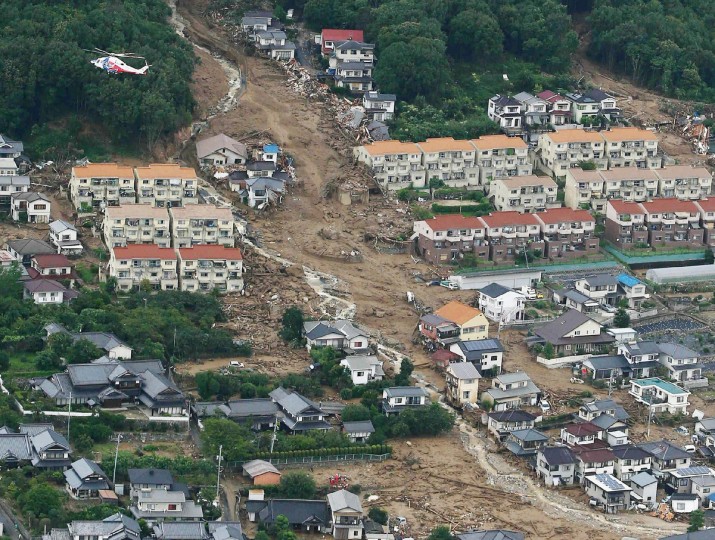 This aerial view shows the damage caused by a landslide after heavy rains hit the city of Hiroshima, western Japan. At least 18 people were killed and another 13 were still missing after a huge landslide engulfed homes in western Japan, reports said on August 20. (Jiji Press/Getty Images) 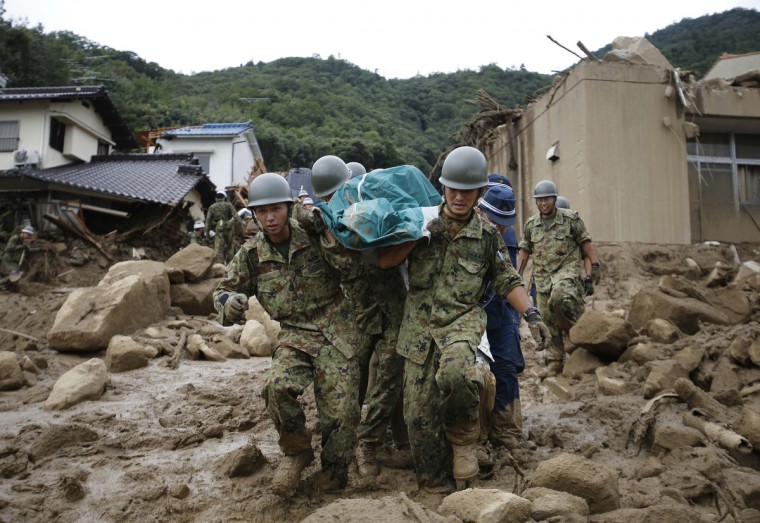 Japan Self-Defense Force (JSDF) soldiers and police officers carry the body of a victim in a plastic bag at a site where a landslide swept through a residential area at Asaminami ward in Hiroshima, western Japan, . At least 27 people, including several children, were killed in Japan on Wednesday, when landslides triggered by torrential rain slammed into the outskirts of the western city of Hiroshima, and the toll was likely to rise, police said. Ten people were missing after a month’s worth of rain fell overnight, loosening slopes already saturated by heavy rain over the past few weeks. (Toru Hanai/Reuters) 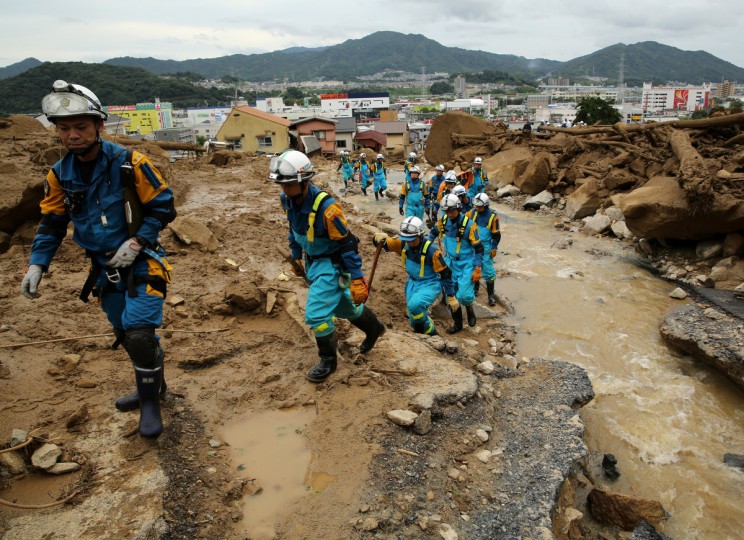 Members of Police arrive to doing rescue work in an area damaged by a landslide caused by torrential rain at the site of a landslide in a residential area in Hiroshima, Japan. At least 18 people were confirmed dead and several unaccounted people are missing after torrential rain caused flooding and landslides in the city of Hiroshima early today. (Buddhika Weerasinghe/Getty Images) 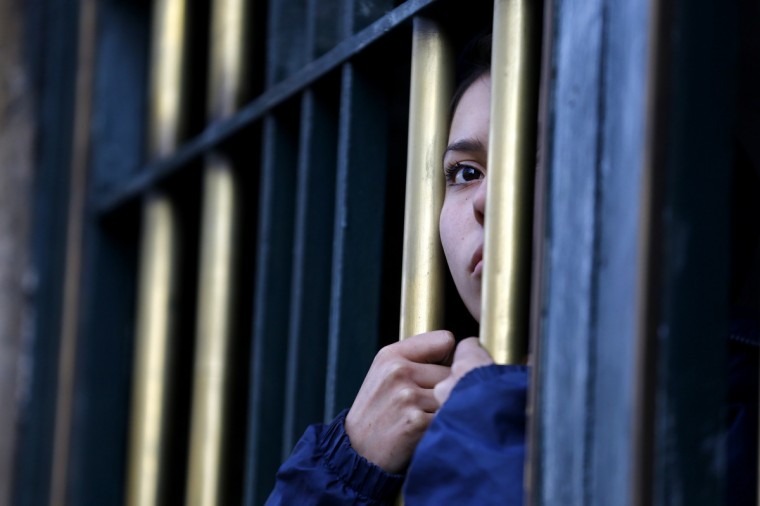 A student looks through the main gate of the Education Ministry building during its occupation in downtown Santiago. Around 25 students occupied the building as part of a protest demanding changes in the education system. (Ivan Alvarado/Reuters) 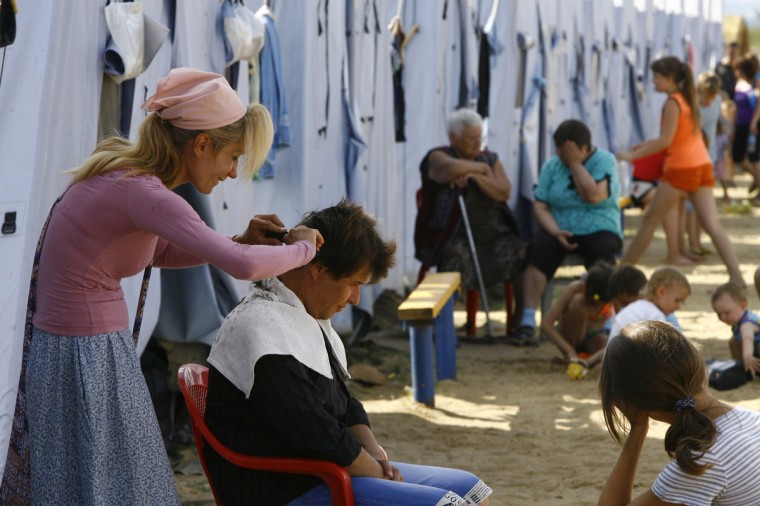 A refugee from eastern Ukraine cuts her counterpart’s hair in a refugee camp near the Russian city of Donets’k, Rostov region, about 15 kilometres from the Russian-Ukrainian border. Some 285,000 people have already fled their homes due to the conflict in east Ukraine, it is estimated, with many leaving for other parts of the country, but close to 168,000 seeking sanctuary in Russia. (Sergei Venyavsky/Getty Images) 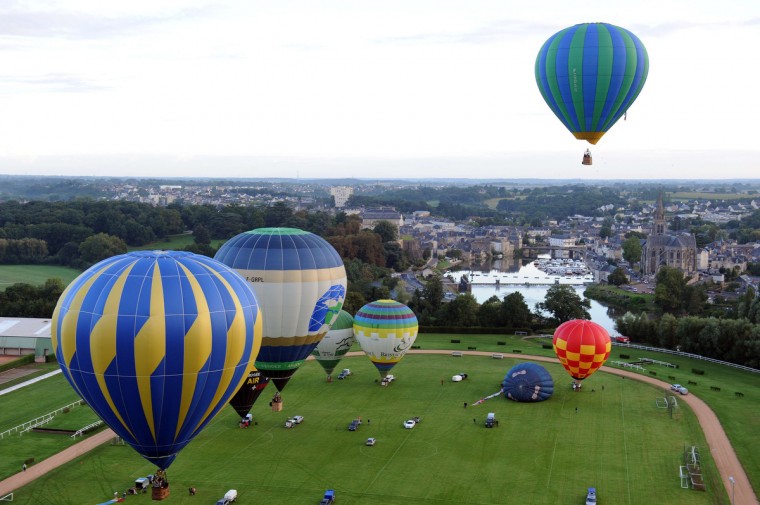 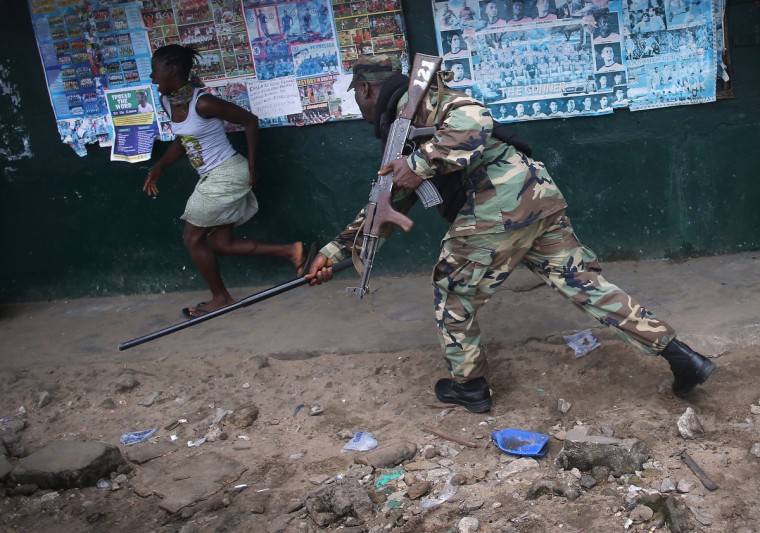 A Liberian Army soldier, part of the Ebola Task Force, beats a local resident while enforcing a quarantine on the West Point slum in Monrovia, Liberia. The government ordered the quarantine of West Point, a congested seaside slum of 75,000, on Wednesday, in an effort to stop the spread of the virus in the capital city. Liberian soldiers were also sent in to the seaside favela to extract West Point Commissioner Miata Flowers and her family members after residents blamed the government for setting up a holding center for suspected Ebola patients to be set up in their community. A mob overran and closed the facility on August 16. The military also began enforcing a quarantine on West Point, a congested slum of 75,000, fearing a spread of the epidemic. The Ebola virus has killed more than 1,200 people in four African nations, more in Liberia than any other country. (John Moore/Getty Images) 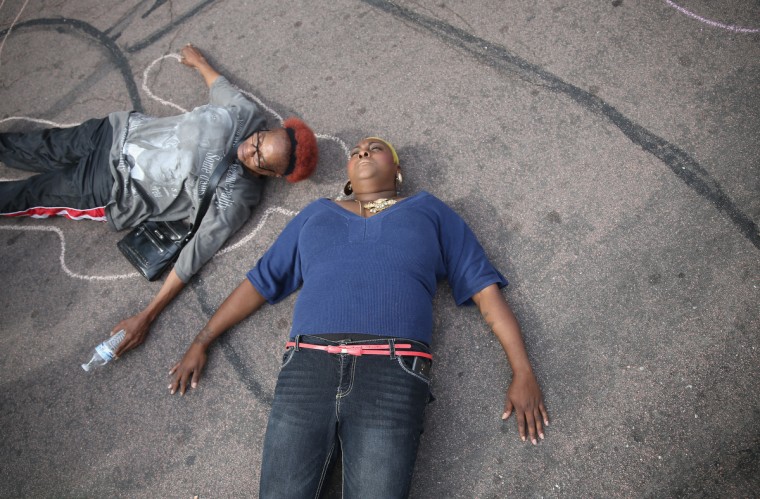 Protesters lay on the ground to draw lines around their bodies as they and other demonstrators protest outside of the Buzz Westfall Justice Center where a grand jury will begin looking at the circumstances surrounding the fatal police shooting of an unarmed teenager Michael Brown in Clayton, Missouri. Brown was shot and killed by a Ferguson, Missouri police officer on August 9. Despite the Brown family’s continued call for peaceful demonstrations, violent protests have erupted nearly every night in Ferguson since his death. (Joe Raedle/Getty Images) 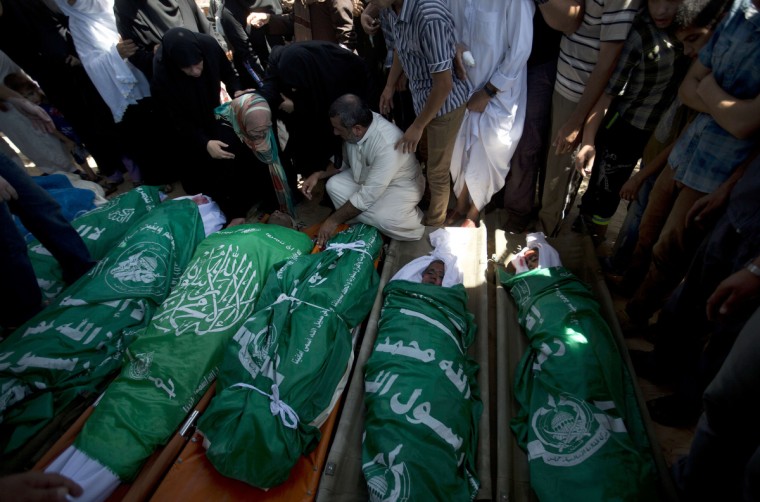 Palestinian relatives mourn over the bodies of members of the Alouh family, killed in an Israeli airstrike in Deir al-Balah in the center of the Gaza Strip. An Israeli air strike on a house in the Gaza Strip town of Deir el-Balah killed a pregnant woman, three young children and two male relatives, emergency services said. They named the dead as Rafat Aloah, 32, three of his children, his brother Mohammed 21 and the woman, Nabilah Aloah, whose relationship to the others was not immediately clear. (Mahmud Hams/Getty Images) 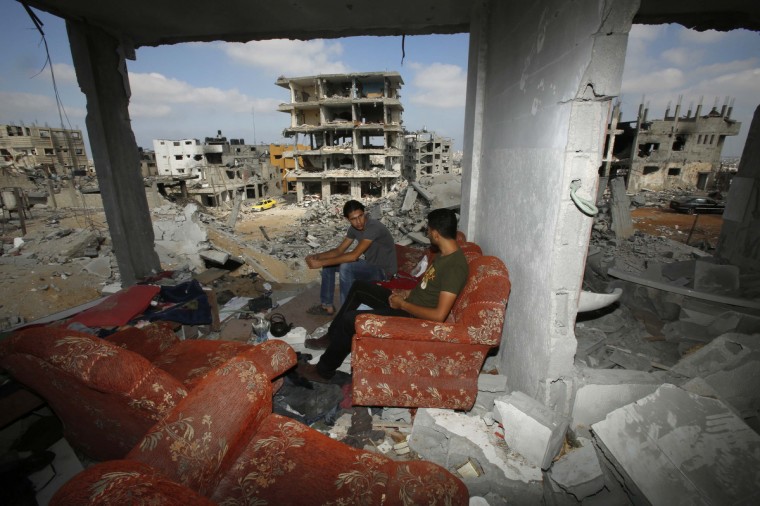 An Israeli soldier rides atop an armored personnel carrier (APC) near the border with the Gaza Strip. An Israeli air strike in Gaza killed the wife and infant son of Hamas’s military leader, Mohammed Deif, the group said, calling it an attempt to assassinate him after a ceasefire collapsed. Palestinians launched more than 100 rockets, mainly at southern Israel, with some intercepted by the Iron Dome anti-missile system, the military said. No casualties were reported on the Israeli side. (Baz Ratner/Reuters) 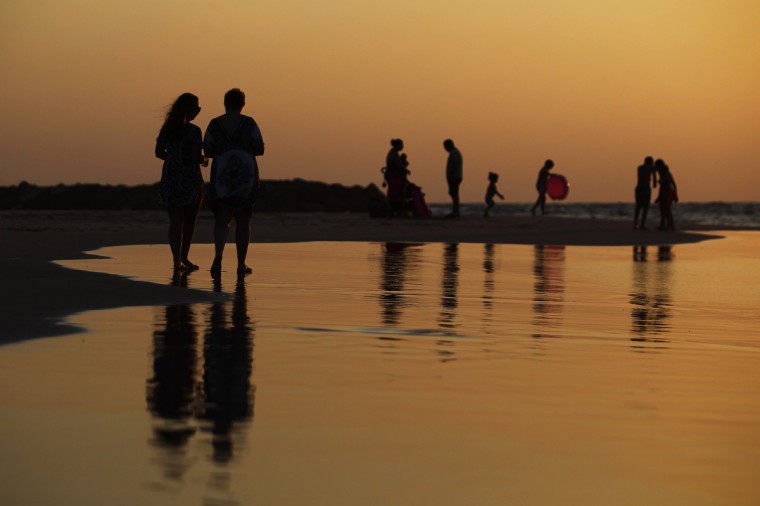 Smoke rises after an explosion in what witnesses said was an Israeli air strike in Gaza. Israel launched its Gaza offensive on July 8 in response to a surge of rocket attacks by Gaza’s dominant Hamas Islamists. Hamas said that Palestinians would continue confronting Israel until its blockade on Gaza was lifted. (Ahmed Zakot/Reuters) 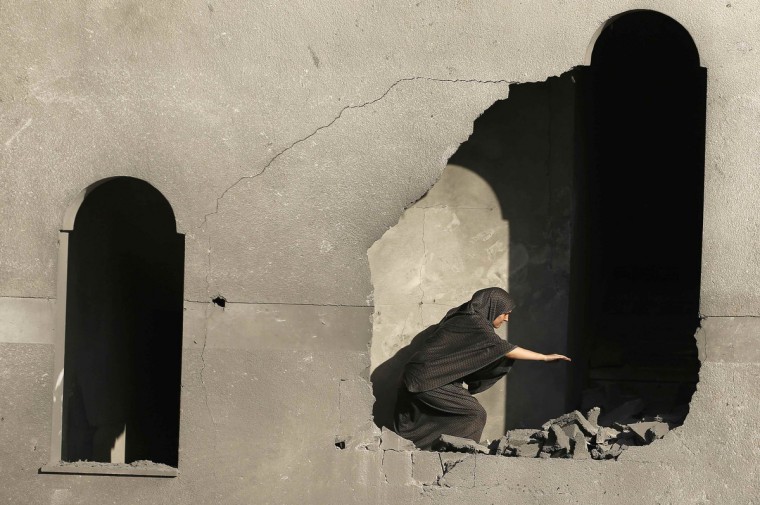 A Palestinian woman inspects her house that witnesses said was damaged during an Israeli airstrike in Gaza City. Hamas militants in the Gaza Strip fired rockets at Israel for a second day on Wednesday after fighting resumed with the collapse of truce talks and an Israeli air strike that killed three people in Gaza. (Suhaib Salem/Reuters) 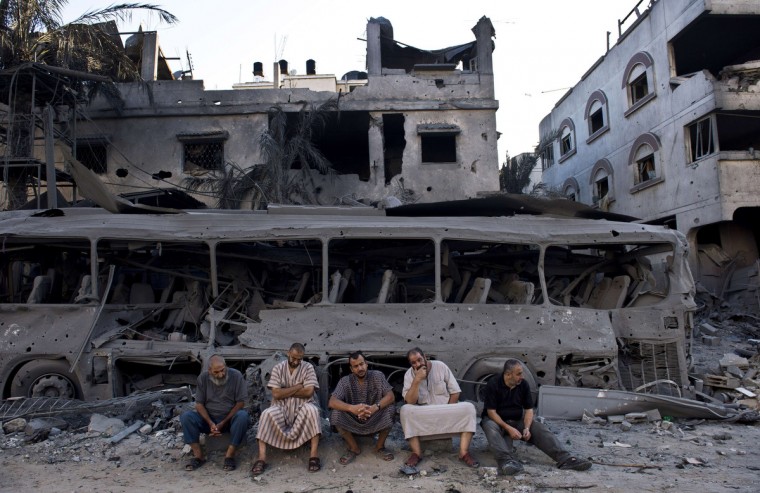 Five Palestinian men sit next to a destroyed bus and houses in front of a house that was completely demolished after it was targeted by Israeli airstrikes late on August 19. Hamas said on August 20 that an Israeli air strike killed the wife and child of its Gaza military chief, as a temporary ceasefire went up in smoke and Cairo truce talks froze. (Roberto Schmidt/Getty Images) 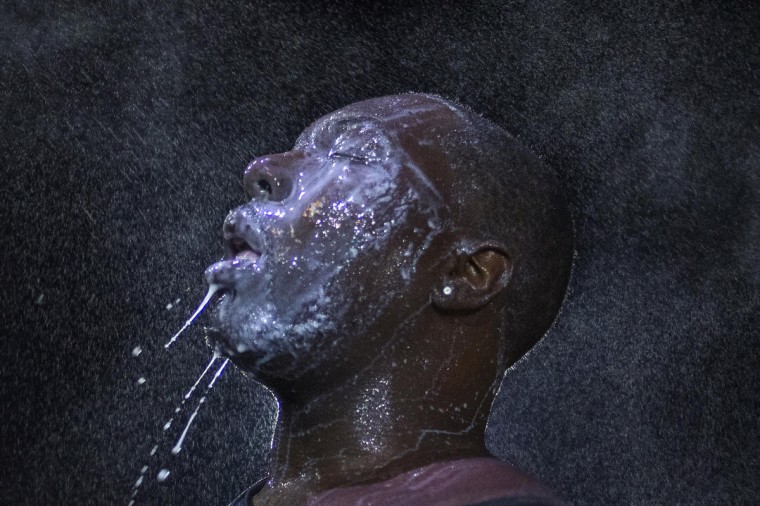 A man is doused with milk and sprayed with mist after being hit by an eye irritant from security forces trying to disperse demonstrators protesting against the shooting of unarmed black teen Michael Brown in Ferguson, Missouri. Police in riot gear ordered dozens of lingering demonstrators in Ferguson, Missouri, to disperse late on Tuesday and charged into the crowd to make arrests as relative calm dissolved amid protests over the police shooting death of Brown in the St. Louis suburb. (Adrees Latif/Reuters) 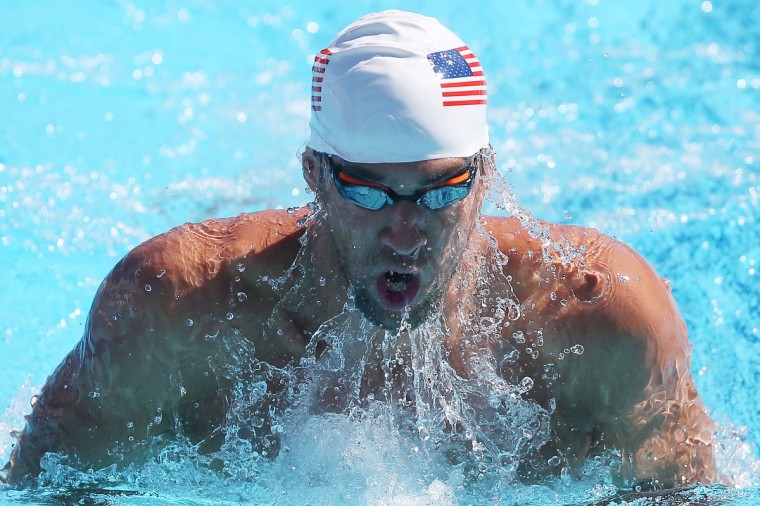 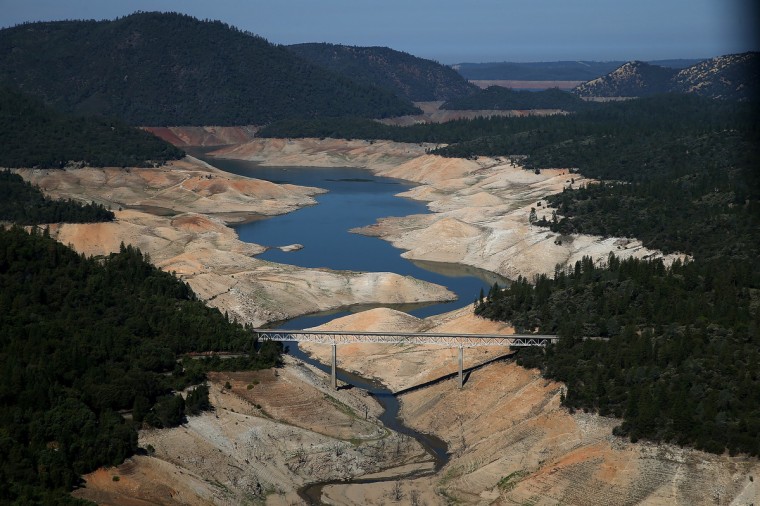 A section of Lake Oroville is seen nearly dry in Oroville, California. As the severe drought in California continues for a third straight year, water levels in the State’s lakes and reservoirs is reaching historic lows. Lake Oroville is currently at 32 percent of its total 3,537,577 acre feet. (Justin Sullivan/Getty Images)

« The art of sports portraits » Photos that define the Ferguson, Mo., protests