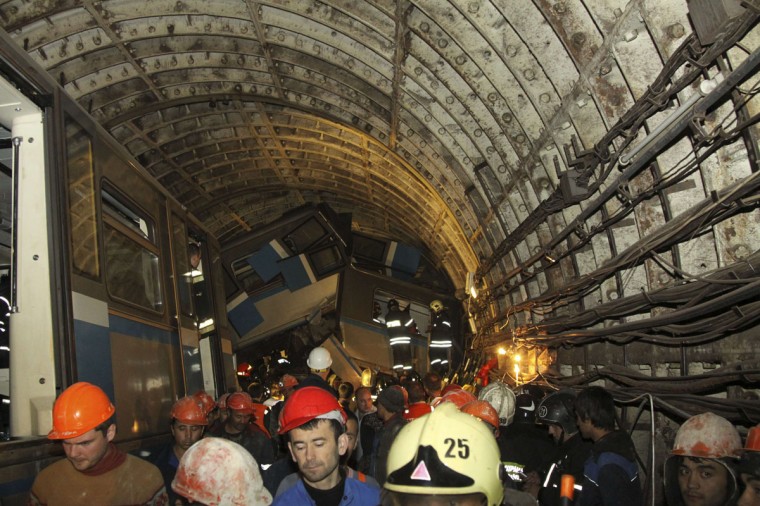 Members of the emergency services work at the site of an accident on the subway in Moscow July 15, 2014. At least 20 people were killed and more than 120 were injured when a Moscow underground train derailed during the morning rush hour in one of the worst accidents on the Russian capital’s subway system in years. (REUTERS/Press Service of Russian Emergencies Ministry of Moscow Region/Handout via Reuters) 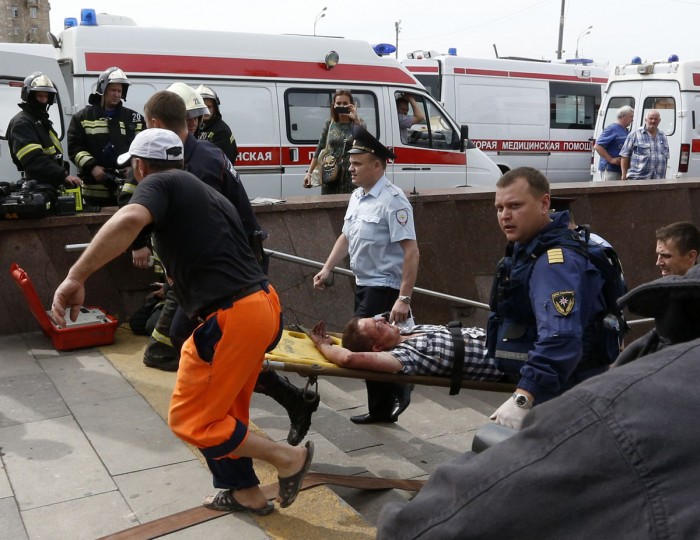 Members of the emergency services carry an injured passenger outside a metro station following an accident on the subway in Moscow July 15, 2014. Nineteen people were killed on Tuesday and up to 120 injured when a Moscow underground train derailed between two stations during the morning rush hour, the Emergencies Ministry said. (REUTERS/Sergei Karpukhin) 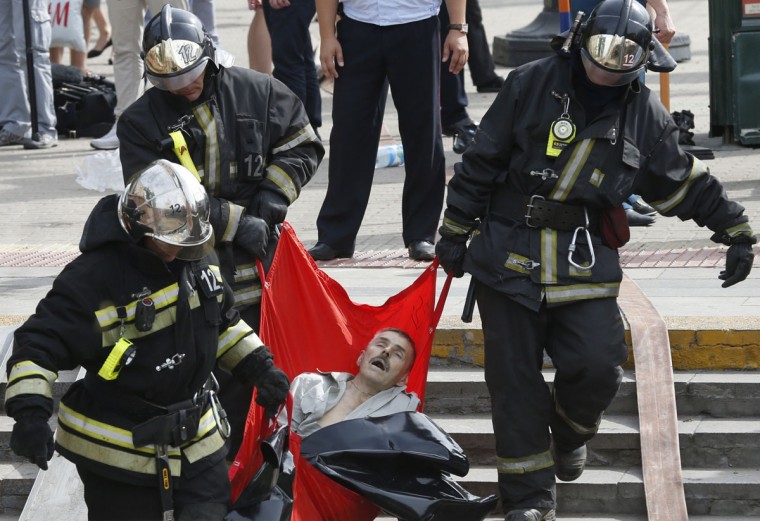 Rescuers carry a passenger injured as several subway cars derailed in Moscow, on July 15, 2014. At least twelve people died and scores were taken to hospital today after a train derailed in the Moscow metro in a tunnel between Park Pobedy and Slavyansky Bulvar stations, in the west of Moscow, city authorities said. (AFP PHOTO/ITAR-TASS/Getty Imagse/Mikhail Japaridze) 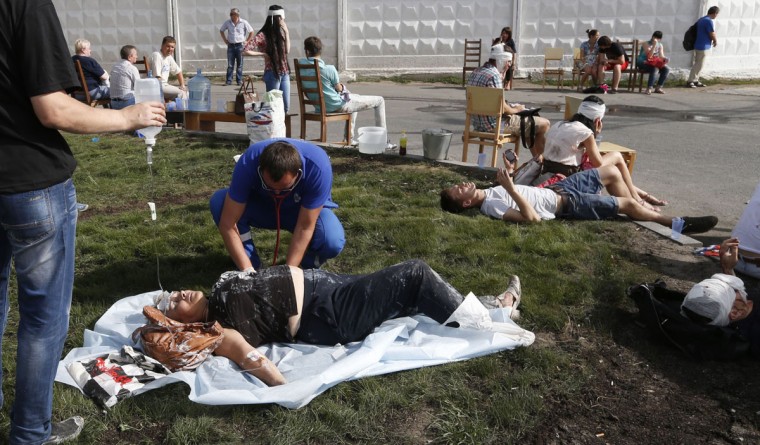 Paramedics treat passengers injured as several subway cars derailed in Moscow, on July 15, 2014. Dozens have reportedly been as several subway cars in a tunnel between Park Pobedy and Slavyansky Bulvar stations, in the west of Moscow, the Russian media reported today. (AFP PHOTO/ITAR-TASS/Getty Imagse/Mikhail Japaridze) 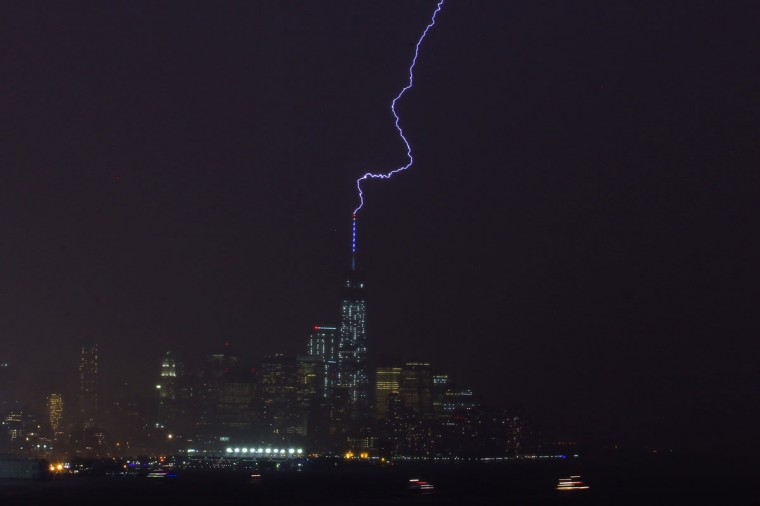 Lightning strikes One World Trade Center in Manhattan as it is seen from Weehawken during a summer storm over New York, July 14, 2014. (REUTERS/Eduardo Munoz) 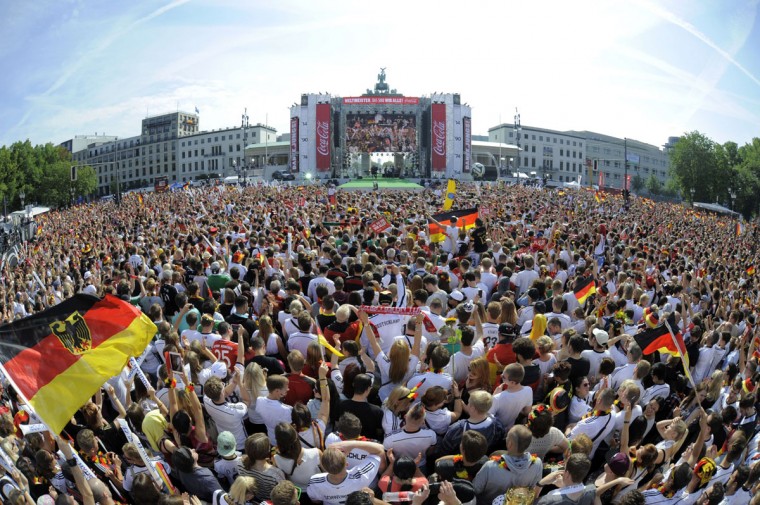 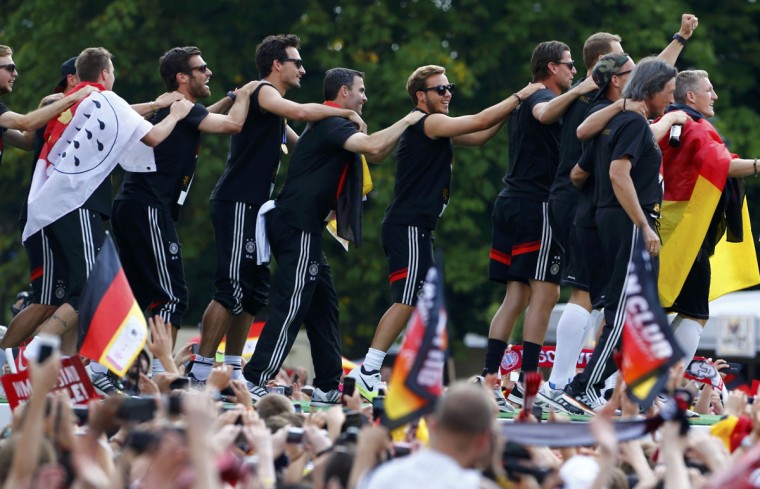 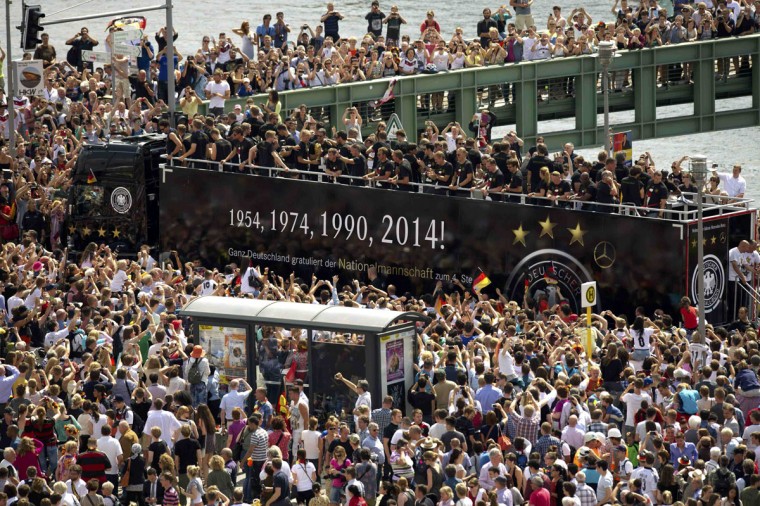 Fans throng a street along the river Spree in central Berlin to cheer Germany’s 2014 Brazil World Cup squad as they proceed in an open-top bus through the capital during a parade to mark the team’s victory July 15, 2014. Germany’s victorious soccer team led by coach Joachim Loew returned home on Tuesday after winning the 2014 Brazil World Cup. A triumphant Germany team landed in Berlin on Tuesday to a hero’s welcome, greeted by hundreds of thousands of jubilant Germans waving flags and wearing the national colours, revelling in the nation’s fourth World Cup victory on Sunday in Brazil. (REUTERS/Steffi Loos) 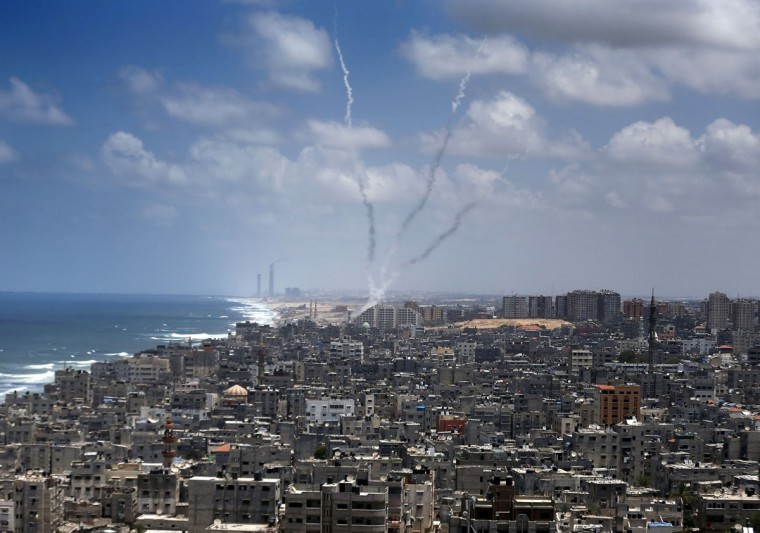 Smoke from rockets fired from near Gaza City is seen after being launched toward Israel, on July 15, 2014. US Secretary of State John Kerry warned of the “great risks” that the violence between Israel and the Gaza Strip could spiral out of control. (AFP PHOTO/Getty Images/Thomas Coex) 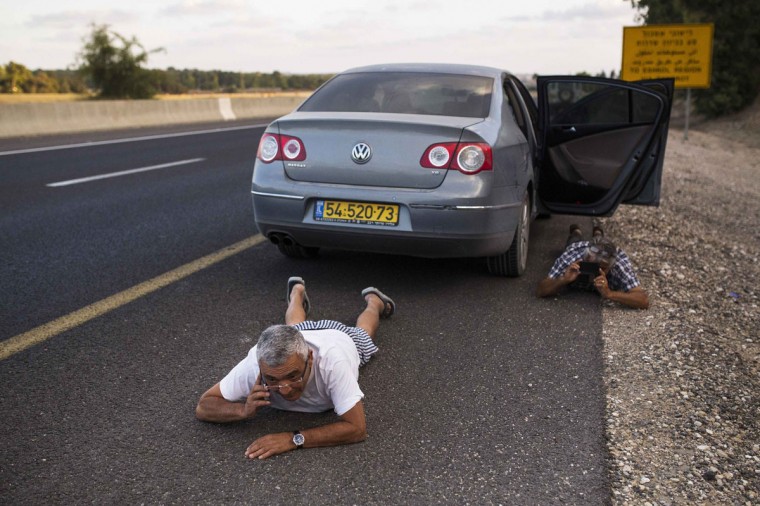 Israelis take cover on the side of a road as a siren sounds warning of incoming rockets outside the northern Gaza Strip July 15, 2014. Israel resumed air strikes in the Gaza Strip on Tuesday after agreeing to an Egyptian-proposed ceasefire deal that failed to get Hamas militants to halt rocket attacks. The week-old conflict seemed to be at a turning point, with Hamas defying Arab and Western calls to cease fire and Israel threatening to step up an offensive that could include an invasion of the densely populated enclave of 1.8 million. (REUTERS/Amir Cohen) 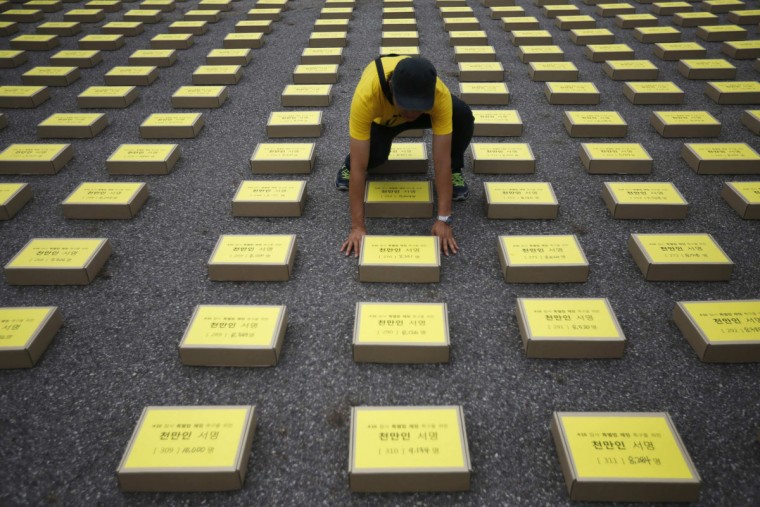 A man arranges a box containing signatures of South Koreans petitioning for the enactment of a special law after the mid-April Sewol ferry disaster, at Yeouido Park in Seoul July 15, 2014. The petition is demanding the government for an impartial investigation into the disaster, as well as just punishment for those responsible and measures to prevent its recurrence, according to local media. Many of the 250 children who drowned when the ferry sank would have survived if the crew had issued a simple order to evacuate to emergency decks just outside their cabins, a prosecutor said on July 8. The words on the box read, “10,000,000 citizens’ signatures demanding Special Law for April 16 Sewol Ferry Tragedy”. (REUTERS/Kim Hong-Ji) 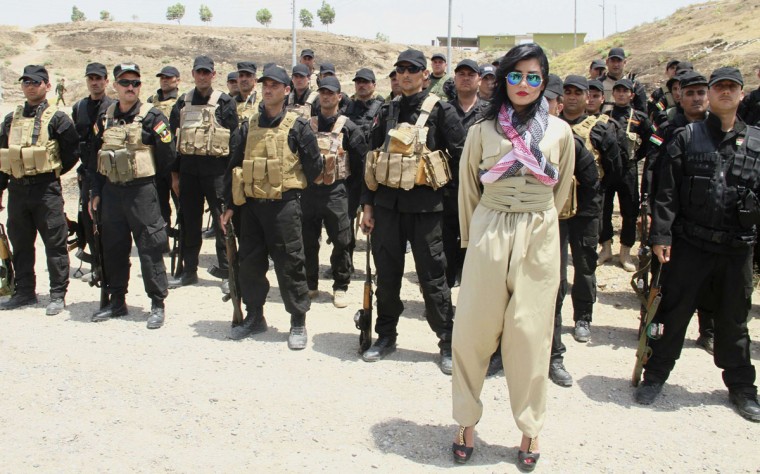 Kurdish pop star Helly Luv poses in front of Kurdish Peshmerga troops at a base in Dohuk in this July 5, 2014 picture provided by Kawin Cihad Tahlavi and made available to Reuters on July 8, 2014. The singer says she will not be put off by death threats from Iraqi Islamist militants since release of her first music video but, drawing on its title, insists she will “Risk It All” to help a push for an independent Kurdistan. (REUTERS/Kawin Cihad Tahlavi/Handout via Reuters) 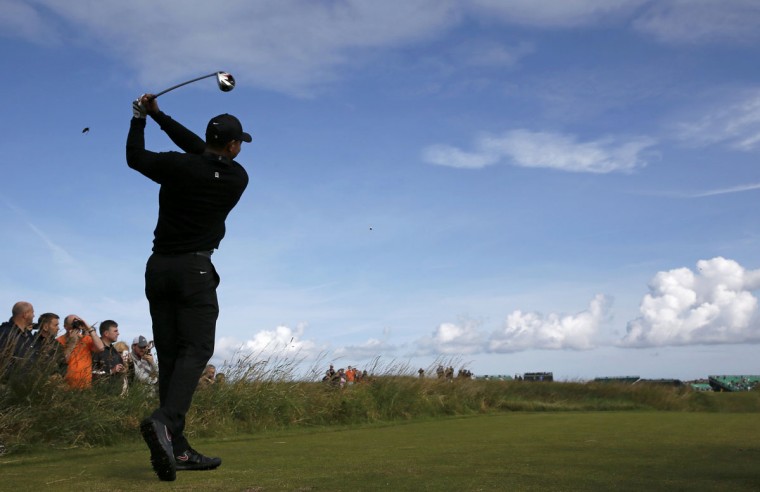 Tiger Woods of the U.S. watches his tee shot on the 12th hole during a practice round ahead of the British Open Championship at the Royal Liverpool Golf Club in Hoylake, northern England July 15, 2014. (REUTERS/Stefan Wermuth) 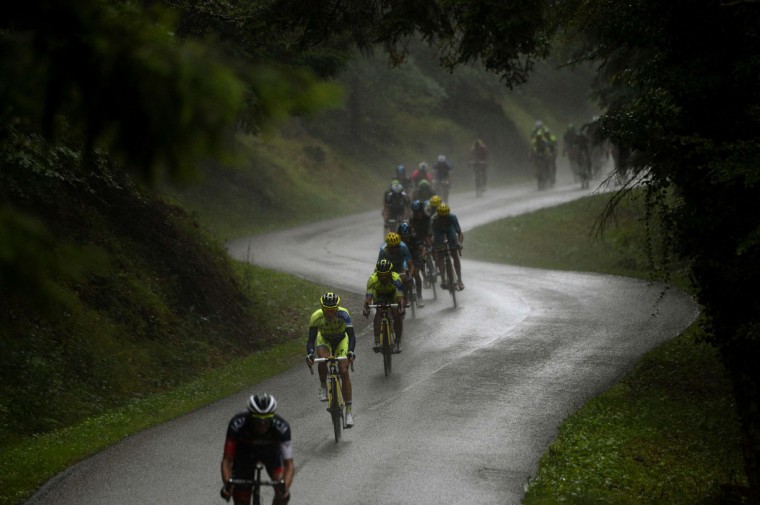 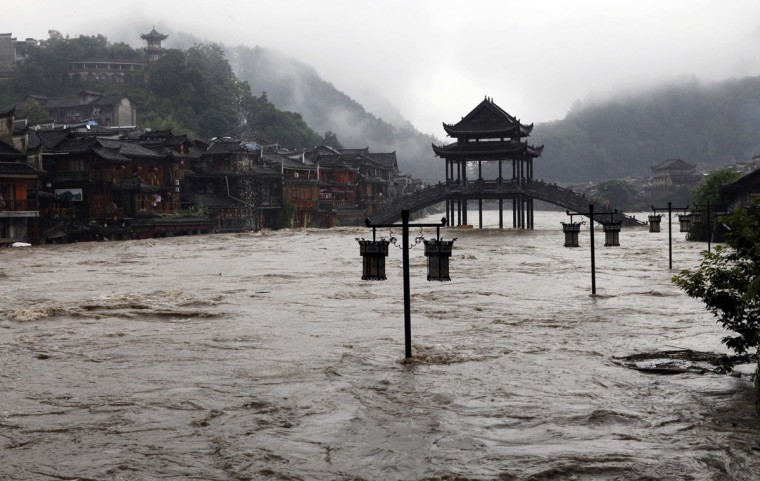 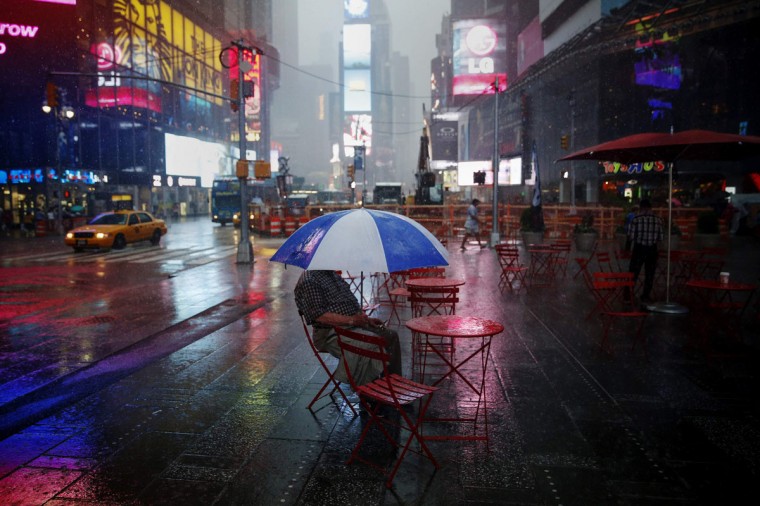 A man sits with an umbrella during a rainstorm at Times Square in New York July 15, 2014. (REUTERS/Shannon Stapleton) 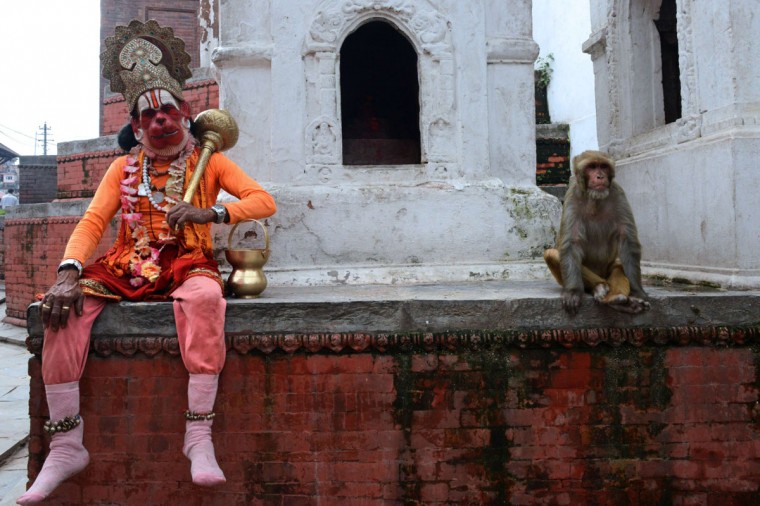 A sadhu (Hindu holy man) dressed as Hanuman, the Hindu monkey god, looks on while sitting next to a macaque monkey at the Pashupatinath Temple area in Kathmandu on July 15, 2014. Hanuman, known for his strength, is worshipped for his unyielding devotion to Lord Rama and is remembered for his selfless dedication to the diety. (AFP PHOTO/Getty Images/Prakash Mathma) 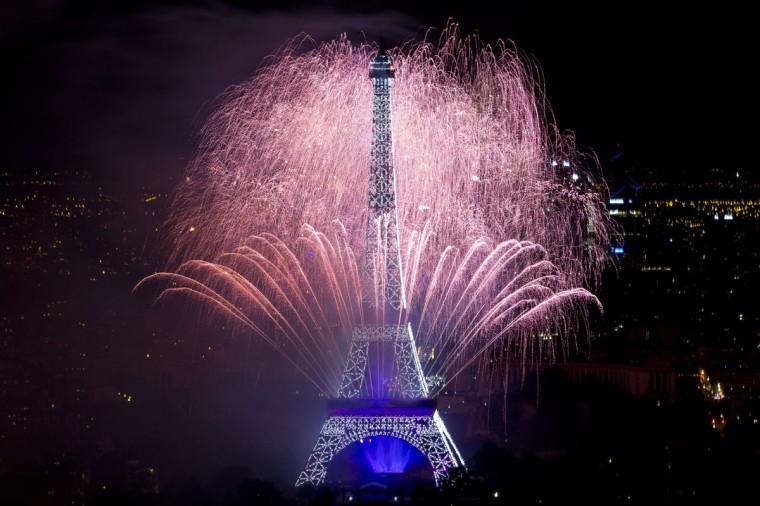 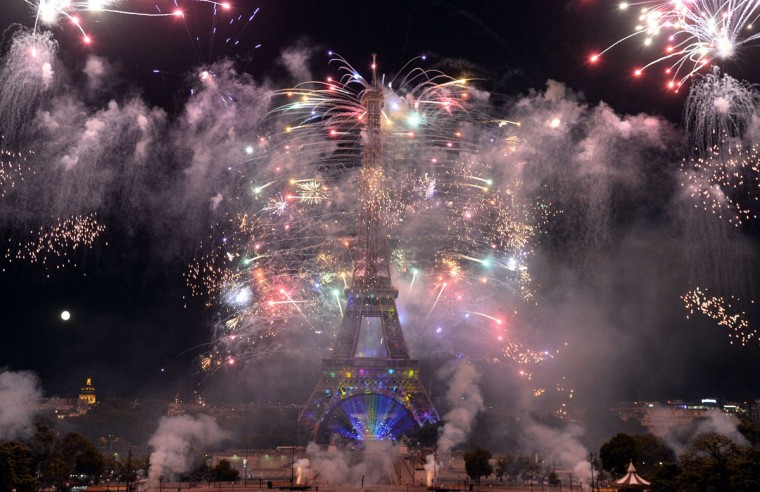 « Along Baltimore’s Light Street » 2014 Tour de France – Stage 11 – Tony Gallopin of France wins the stage after breakaway, Andrew Talansky suffers off the back