“Birdland and the Anthropocene” at the Peale Center 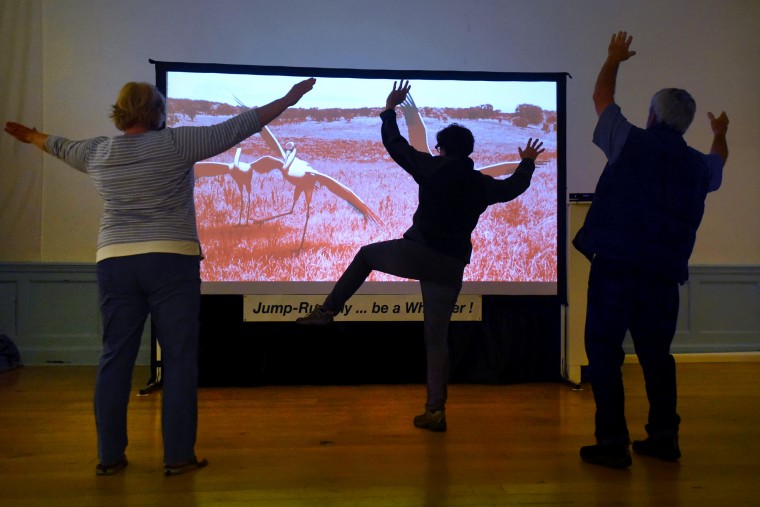 Artist Cathy C. Cook, center, and Peale Center visitors MaryEllen and Carl Bowser of York, PA, interact with Cook’s art installation, “Mimicking Whooper,” to appreciate the ways cranes communicate by gesture and vocalization. This virtual interaction, using gaming software, was made in collaboration with the Imaging Research Center at UMBC. In the exhibit, “Birdland and the Anthropocene,” Cook explains that cranes, an endangered species, are not as different from people as we might think. (Amy Davis/Baltimore Sun) 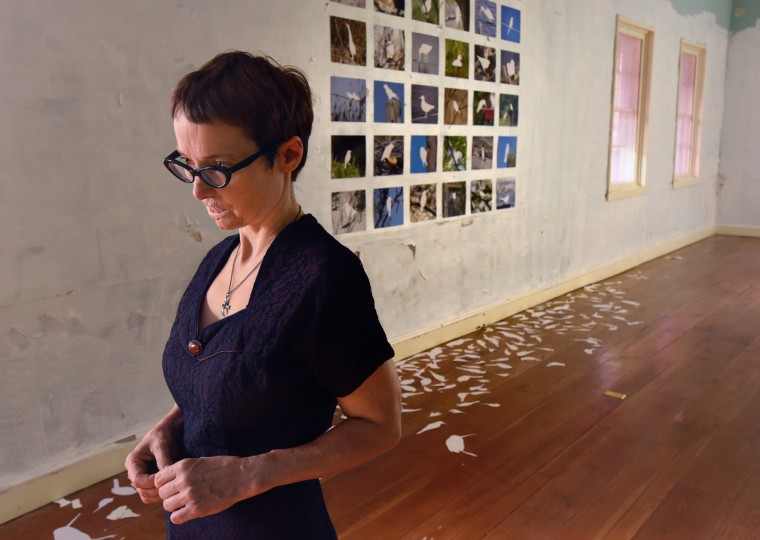 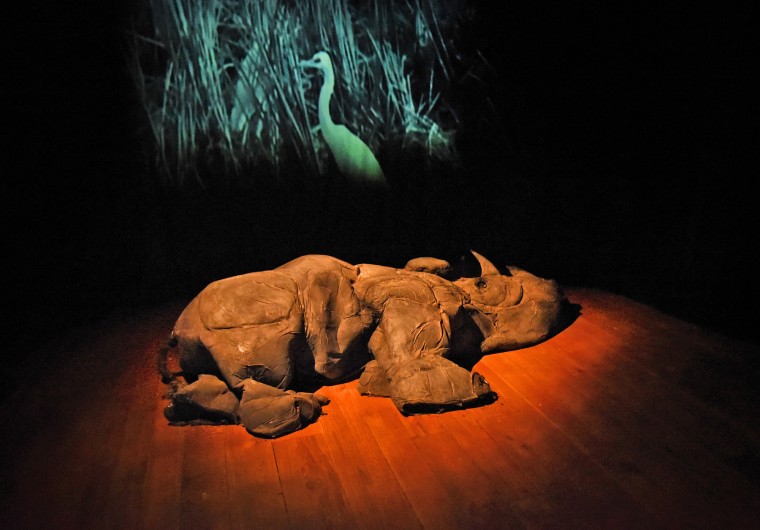 The installation by artist Laure Drogoul, titled “friend of friends of friends (Diceros bicornis longipes),” invites contemplation of the extinct West African black rhinoceros and the cattle egrets that feed off insects on the rhinoceros. The work incorporates sound, video and sculpture. (Amy Davis/Baltimore Sun) 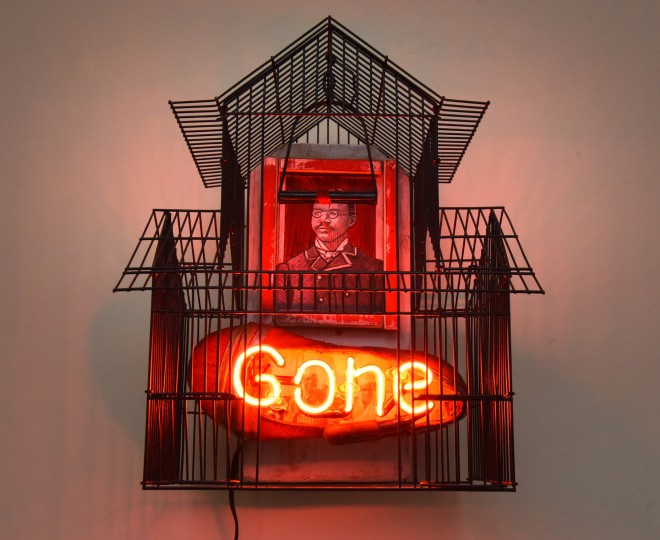 “I Know Why the Caged Bird Sings,” by William Rhodes, expands the issue of bird extinction to the people of the African diaspora, by introducing a portrait of an African-American man trapped inside a bird cage. The sculpture, in the Peale Center exhibition, “Birdland and the Anthropocene,” suggests the confinement and exploitation of all threatened groups. (Amy Davis/Baltimore Sun) 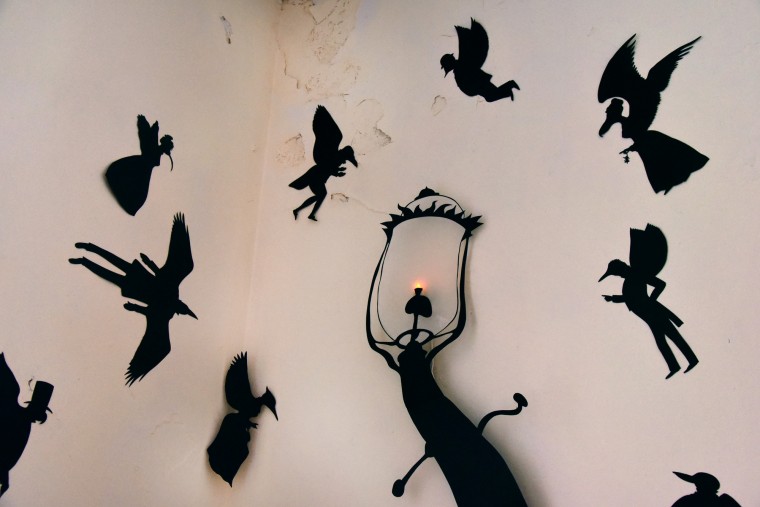 Fanciful bird-human silhouettes swarm around a gaslight in “Misguiding Light,” a nod to the history of the Peale Museum, where gas light was introduced to Baltimore by Rembrandt Peale in 1816. Artist Chris Siron was also inspired by the work of Moses Williams, an African-American silhouette artist who was a former slave of Rembrandt Peale’s father, Charles Willson Peale. Two art pieces by Siron are in “Birdland and the Anthropocene,” an exhibition at The Peale Center. (Amy Davis/Baltimore Sun) 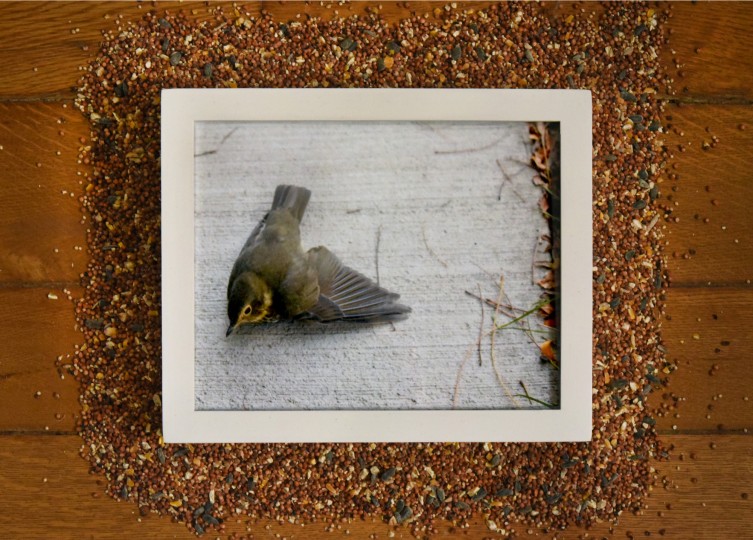 A detail from “The Flying Gardens of Maybe,” an installation by transdisciplinary artist Andrew S. Yang, explores the interruption of seed germination that occurs after birds , which disperse seeds, die in increasing numbers. (Amy Davis/Baltimore Sun) 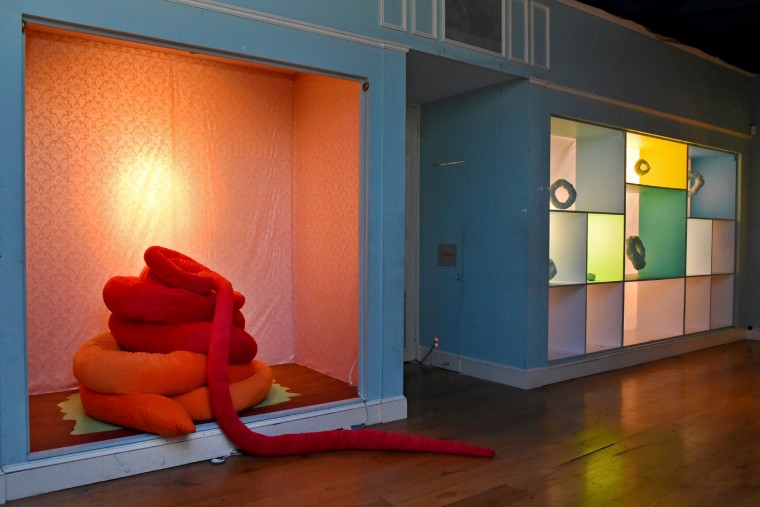 In “swallow and swallow,” artist Nicole Shiflet invites visitors to wrap themselves up in a larger-than-life stuffed fabric red and orange bird intestine. Shiflet also pays homage to endangered species with the abstracted, post-extinction landscapes at right. (Amy Davis/Baltimore Sun) 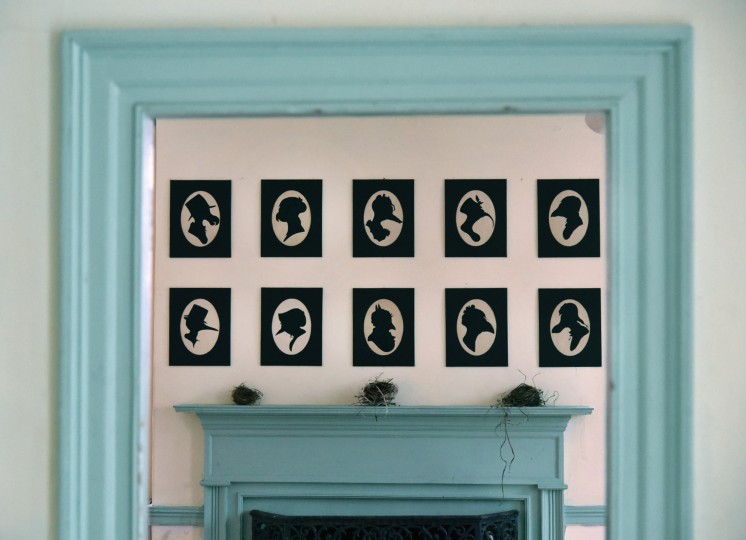 Silhouettes that merge the heads of extinct birds with 19th century hats and clothing suggest the fleeting life of birds and humans, in a domestic arrangement by artist Chris Siron. The installation is also a metaphor for the idea of home as transitory, by its incorporation of bird nests with the architectural details of the 1814 Peale Museum. (Amy Davis/Baltimore Sun) 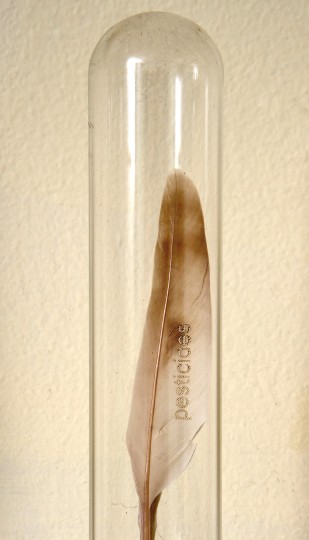 A feather laser etched with the word “pesticide,” is part of “Ten Bird Deaths,” a series of feathers displayed in test tubes like curios, each etched with a different cause for the extinction of birds. The art by Elisabeth Pellathy also includes representations of bird songs as a commentary on natural specimens that are collected, displayed and owned as a commodity, divorced from their natural environment. (Amy Davis/Baltimore Sun) 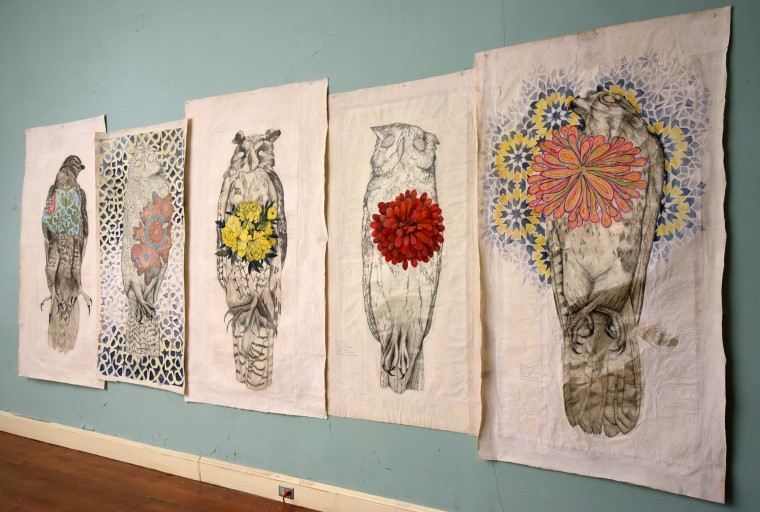 Pencil and gouache drawings of falcons and owls on Nepalese lokta paper, by Monique Luchetti, acknowledge death and life in nature. Luchetti draws birds from ornithology collections in pencil, and then layers these mournful specimens with colorful imagery to represent the former life force and soul of these creatures. (Amy Davis/Baltimore Sun) 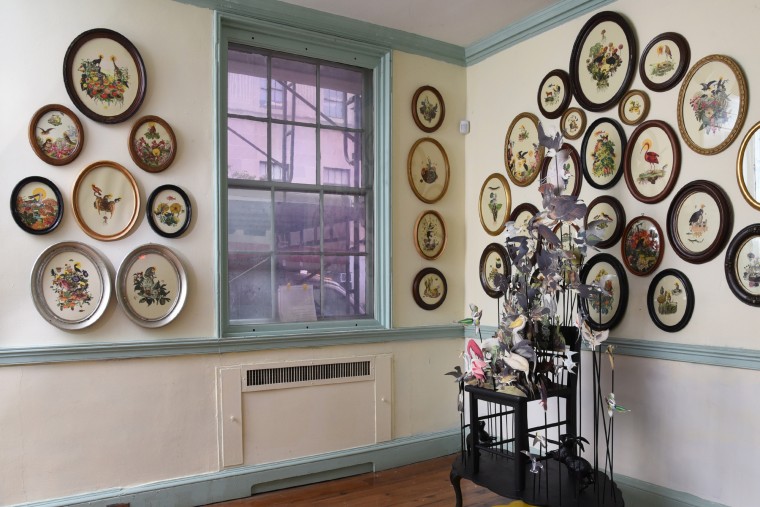 “Project Santos, by artist Edgar Endress, is an assemblage of old botanical and zoological illustrations that advanced knowledge of exotic locales, but reinforced a Colonialist perspective. (Amy Davis/Baltimore Sun) 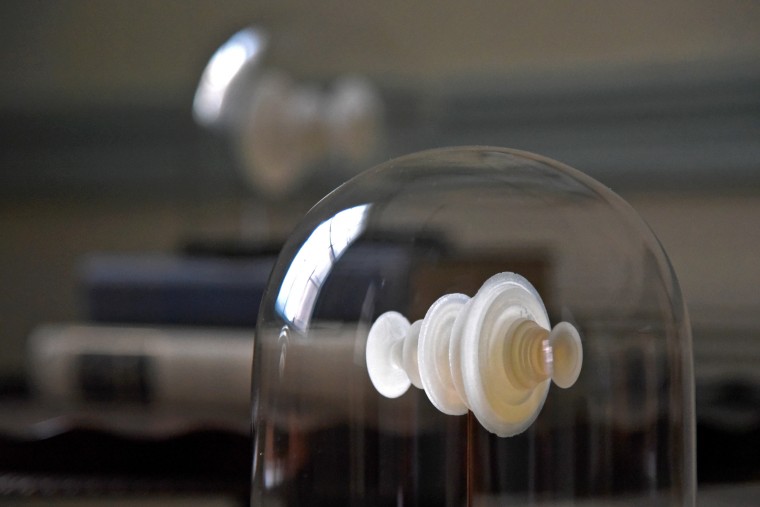 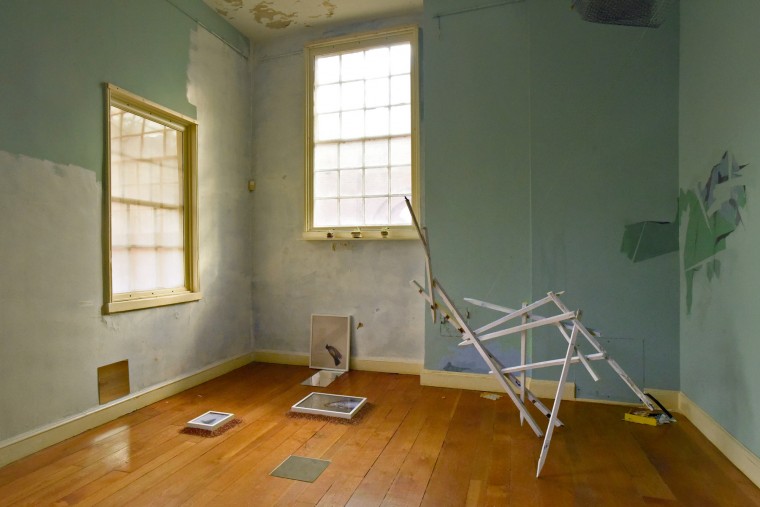 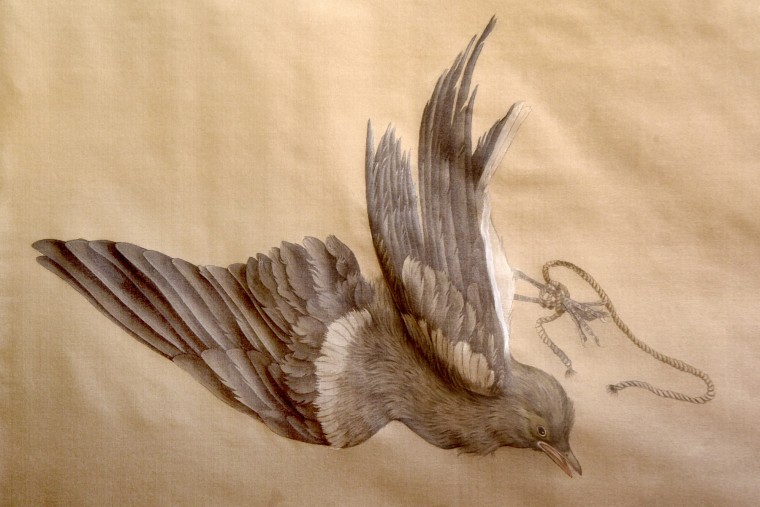 Jieyu Zhang’s watercolor drawings, using mineral pigments on sizing silk, present dead birds as reminders of the struggle they face against extinction. Zhang writes that a demand for wild birds for consumption has resulted in massive capture, causing the extinction of several species. (Amy Davis/Baltimore Sun) 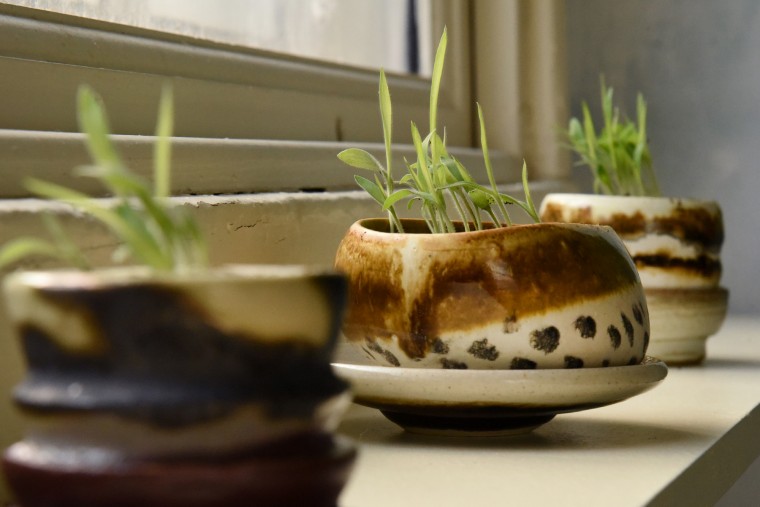 “Flying Gardens of Maybe,” a project by Andrew S. Yang, retrieves seeds from fallen birds, which are grown in handmade ceramic stoneware pots glazed to reflect the coloration and feathering of each bird. The birds, victims of collisions with the reflective windows of skyscrapers, are brought by volunteers to the Field Museum of Natural History in Chicago to be catalogued. Yang’s work highlights the ecology of interruption. (Amy Davis/Baltimore Sun) 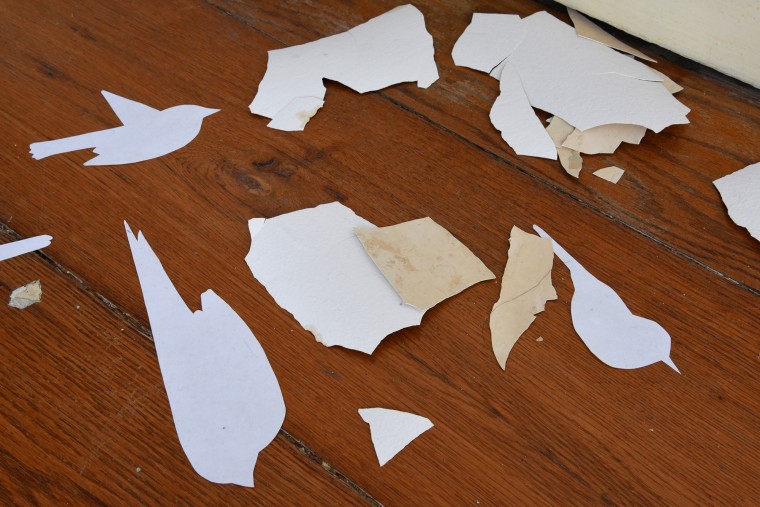 White paper cut-out bird “ghosts” inadvertently mingle with flaking plaster in one of the galleries at the Peale Center still in need of renovation. This is a detail of the installation piece by artist Lynn Parks, a bird advocate and the curator of the “Birdland and the Anthropocene” exhibition. (Amy Davis/Baltimore Sun) 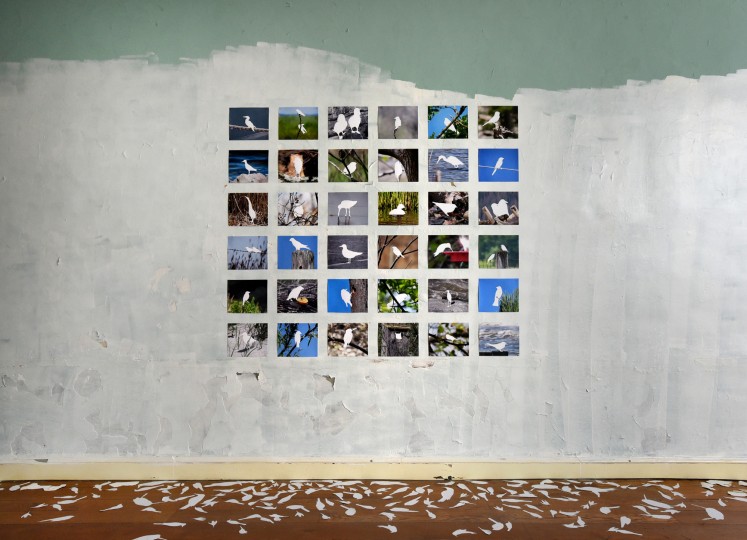 Lynne Parks, artist and bird advocate, transformed her photo documentation of birds in their habitat into “Missing Birds,” an art installation about their decline due to collisions with buildings, disappearance of habitat, pesticides, and other threats. This loss is represented by fallen white paper bird “ghosts” scattered on the floor. Parks is the curator of “Birdland and the Anthropocene,” on view at the Peale Center through Oct. 29, 2017. (Amy Davis/Baltimore Sun) 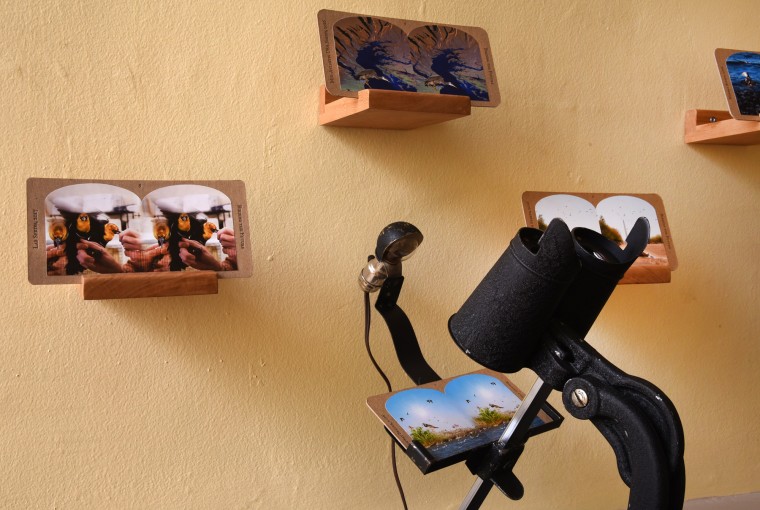 “Birding the Future” is a multi-channel sound and stereoscopic installation by Krista Caballero and Frank Ekeberg that invites viewers to view visionary avian landscapes through stereoscopic cards, and hear endangered and extinct bird calls. The interdisciplinary project is part of “Birdland and the Anthropocene,” at the Peale Center. (Amy Davis/Baltimore Sun) 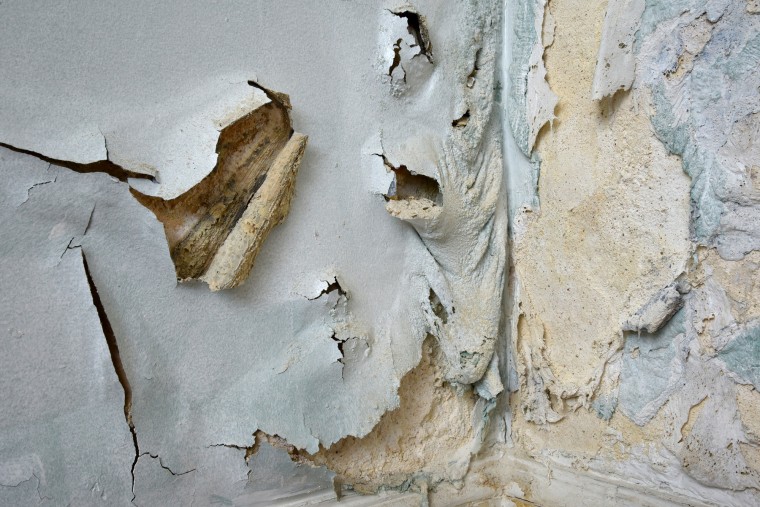 The blistered, peeling walls in a third floor gallery are a reminder of the renovation work that remains to be done at the Peale Center. The decay in the 1814 building erected as a museum by Rembrandt Peale enhances the theme of extinction in “Birdland and the Anthropocene.” Art exhibits, live events, and other programs are being held at the Peale while the renovation, scheduled to be completed in 2020, is in progress. ((Amy Davis/Baltimore Sun) 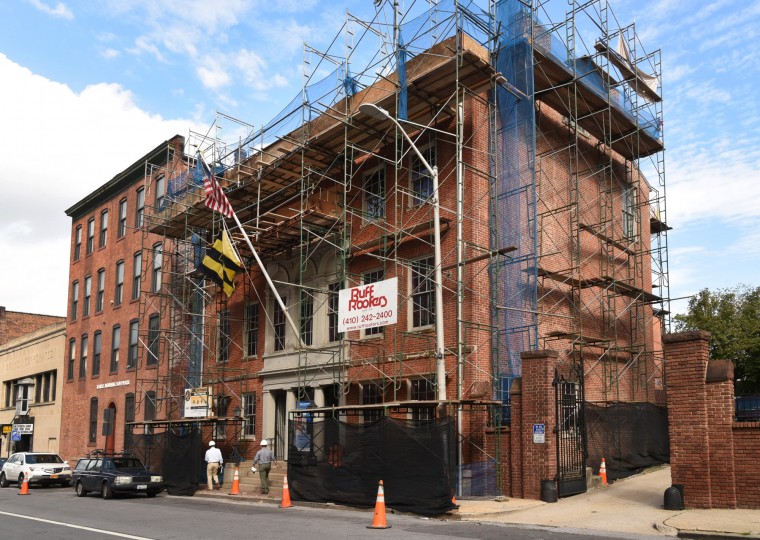 The Peale Center, at 225 Holliday Street, was built by Rembrandt Peale in 1814 as a museum of art and natural history. After closing as a museum in the 1990s, the building, undergoing major renovations, is re-emerging as an incubator for innovative cultural programming, exhibits and creative activities. (Amy Davis/Baltimore Sun)

A thought-provoking exhibition, “Birdland and the Anthropocene,” scrutinizes birds even more seriously than devoted Ravens and Orioles fans do on game day. The art, which fills four floors of the Peale Center, ponders ornithology from numerous perspectives, but the overriding theme is extinction. For declining bird populations there is no consolation that next season will be better.

Anthropocene refers to the current geological period, in which the impact of humans on our planet is pervasive. Birds are disappearing due to loss of habitat, pesticides, invasive species, building collisions, commercial demand for wild birds, and even free-roaming cats. Baltimore artist and bird conservation advocate Lynne Parks has curated the show, which brings together over thirty artists and performers to look at the different ways we are failing birds, an essential and beautiful part of our ecosystem.

For this ornithological examination, the former Peale Museum on Holliday Street is the perfect habitat. The 1814 building has deteriorated from years of neglect, and like our birds, is a living dinosaur on life support. Now called the Peale Center for Baltimore History and Architecture, the museum started by Rembrandt Peale is undergoing major renovations. Plans call for a range of cultural activities and innovative approaches to history education and artistic expression. The Peale, which was dedicated to art and natural history, has come full circle with this ambitious show.