Despite a 2012 city initiative to ban Formstone on new construction, the cladding remains intact on many blocks throughout the city. Here, a look at the siding that filmmaker John Waters once called “the polyester of brick,” whose history is closely linked with Baltimore’s. 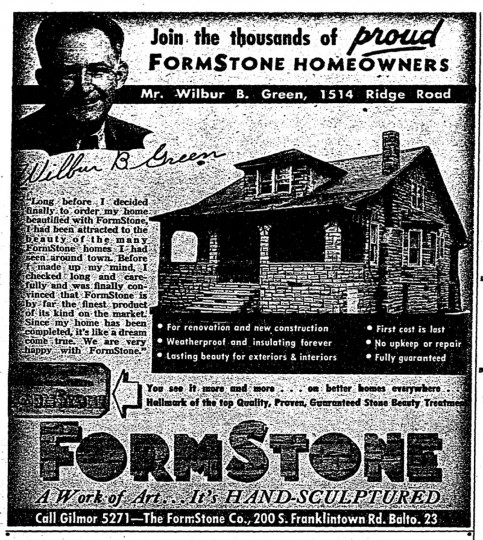 A 1950 ad for FormStone that ran in The Baltimore Sun urged residents to “join the thousands of proud FormStone homeowners.” Such ad campaigns were apparently quote successful — the plethora of formstone clad houses in the city can attest to that. (Baltimore Sun archives) 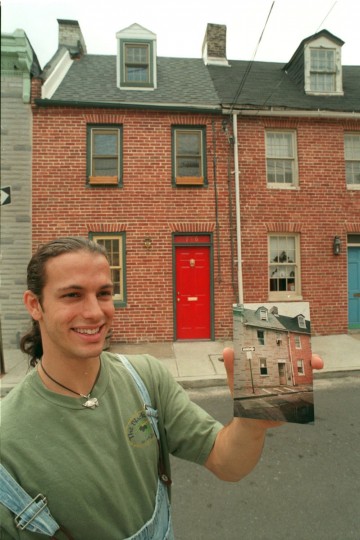 A renovated alley home at 71 S. Bethel St., built in the 1790’s. He is holding a before picture, showing the Formstone exterior he removed. (Amy Davis/Baltimore Sun) 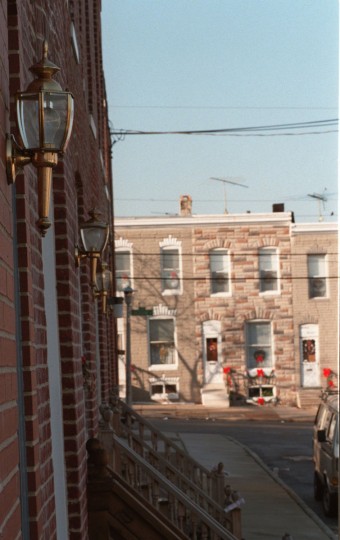 A row of brass lamps adorn homes on the 600 block of Harvey Street in South Baltimore Friday Dec. 27, 1996, as homes covered in formstone line up in the background on Belt Street. A former Baltimore city planner calls “The March of the Brass Lamps” the movement of gentrification into South Baltimore. As blocks become gentrified and improved, housing prices have risen, changing the South Baltimore neighborhood from an old traditional area to a yuppie neighborhood. Many newcomers have had the formstone removed from their buildings, exposing the brick underneath, while the older, established neighbors are resisting the change. (Nanine Hartzenbusch/Baltimore Sun archives) 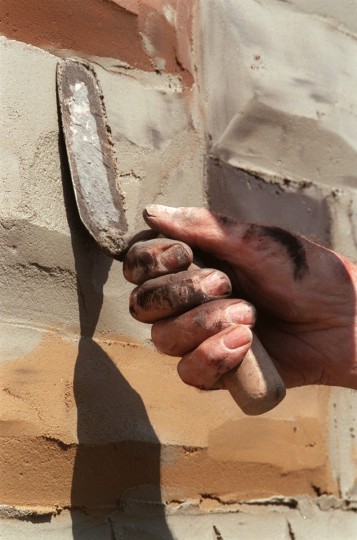 Aado Vaigro, an Estonian-born craftsman who puts formstone on houses for his company, Modern Stone, working on a corner attached home in North Point Village. He has been doing formstone since 1950, but in recent years the trend has been more toward removing the fake stone covering…Vaigro sculpts surface into faux stone blocks with trowel. (Amy Davis/Baltimore Sun archives) 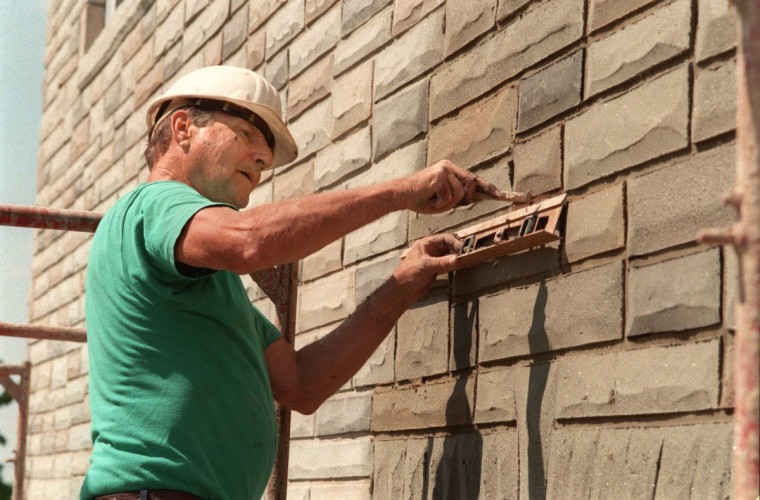 Aado Vaigro, an Estonian-born craftsman who puts formstone on houses for his company, Modern Stone, working on a corner attached home in North Point Village. He has been doing formstone since 1950, but in recent years the trend has been more toward removing the fake stone covering. Vaigro uses level as straight edge to carve lines imitating mortar between “stone” blocks. (Amy Davis/Baltimore Sun archives) 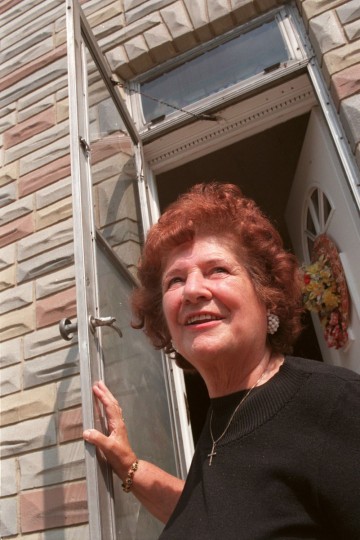 Ida Esposito, 79, interviewed for a film about Formstone, has lived in her Exeter St. rowhouse in Little Italy for 47 years. It was covered in Formstone in 1951. (Amy Davis/Baltimore Sun archives) 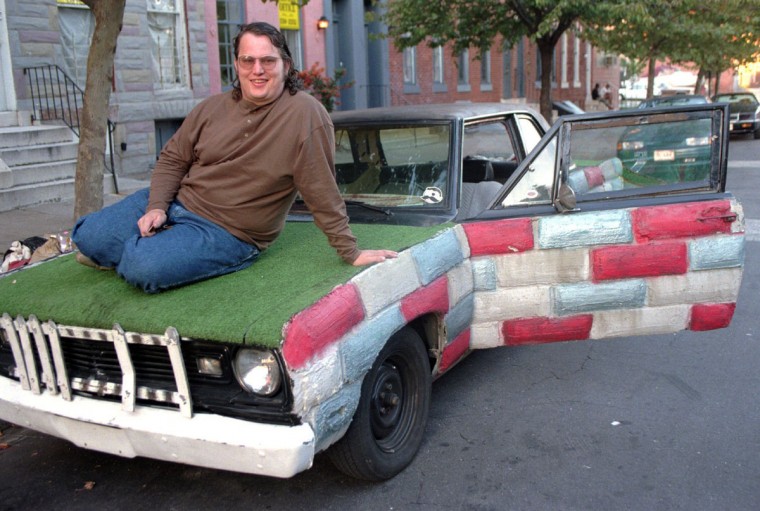 The Formstone Car, a 1969 Plymouth Valiant, was created by Phil Minion, who is laying on its astroturf hood. He lives in southwest Baltimore, in Sowebo. (Barbara Haddock Taylor/Baltimore Sun archive) 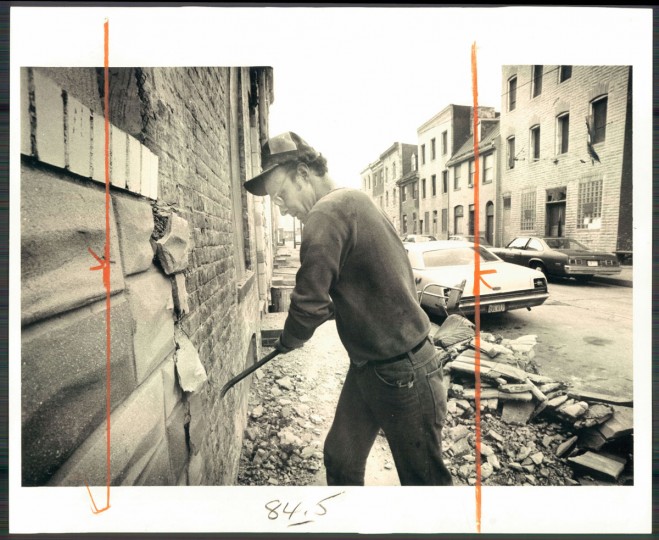 As early as 1978, when this photo was taken, Baltimoreans were beginning to remove the formstone exterior from their homes. (Baltimore Sun archives) 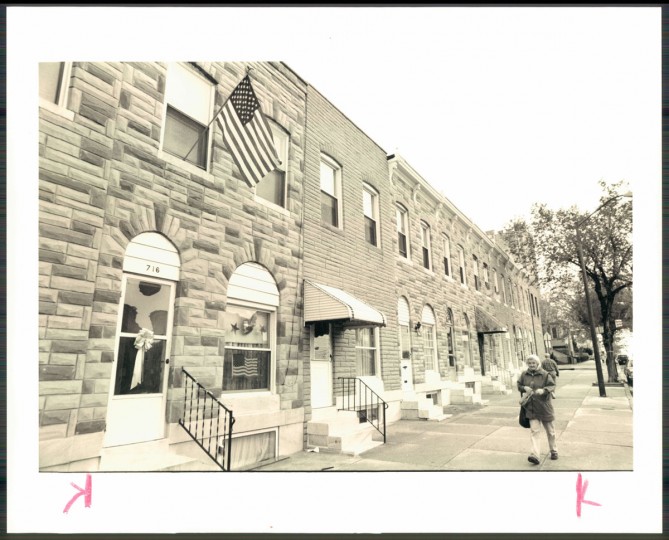 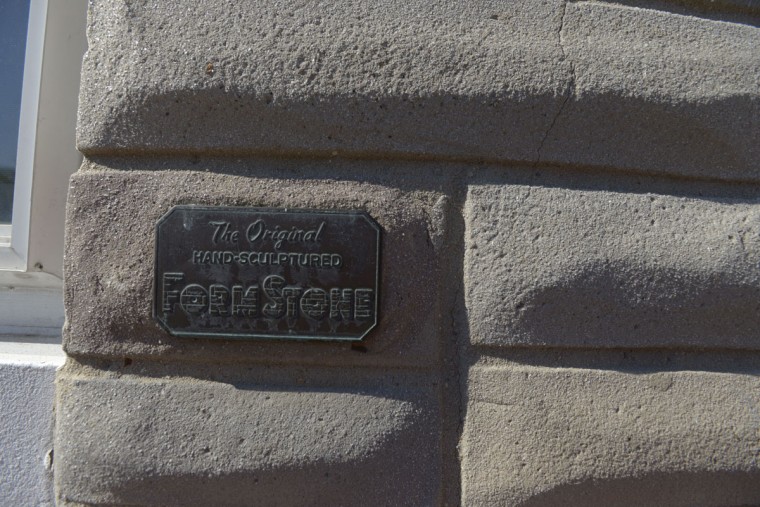 A plaque on the exterior of a home in East Baltimore shows it was installed by FormStone, the most famous of the exterior siding companies. (Christina Tkacik/Baltimore Sun) 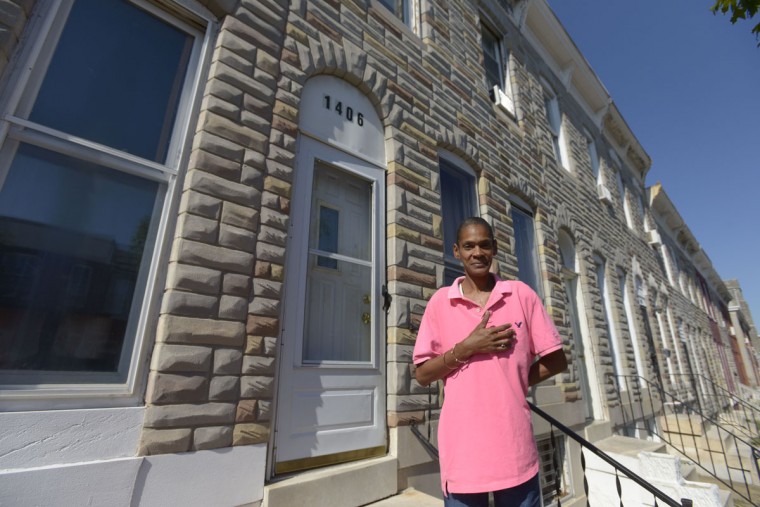 Donna Johnson stands on the front step of her mother’s house on E. Lanvale Street. “This block’s been like this as long as I can remember,” she said. (Christina Tkacik/Baltimore Sun) 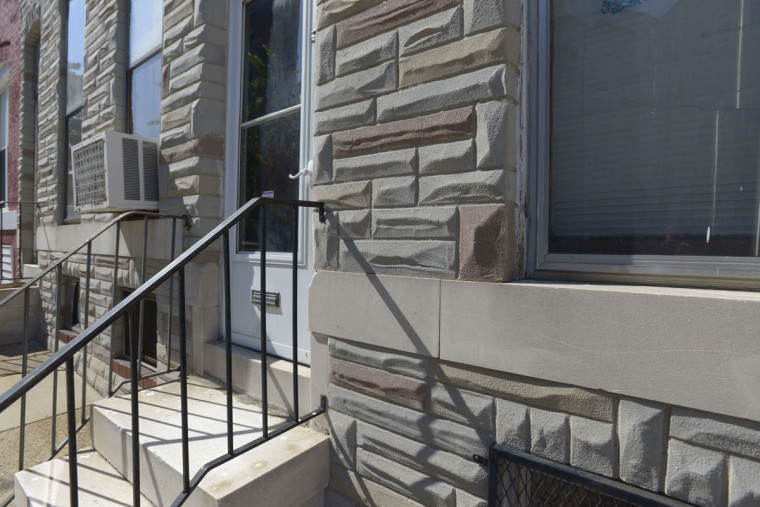 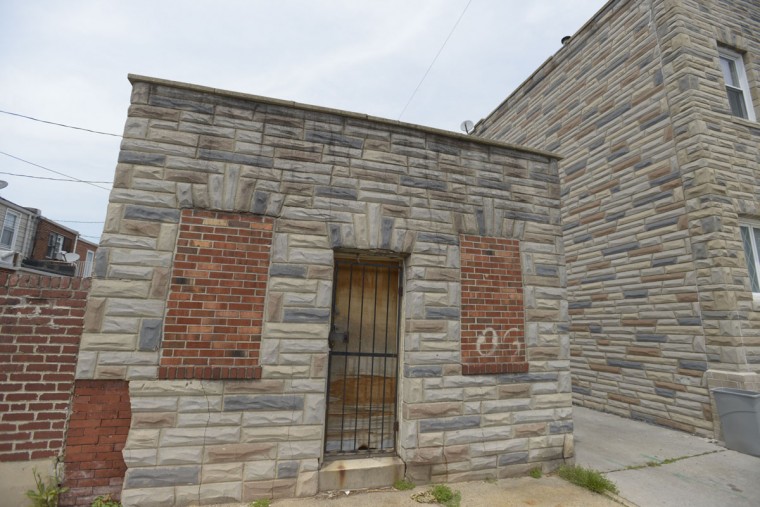 The formstone cladding is chipping away at this building in Highlandtown, revealing the brick underneath. (Christina Tkacik/Baltimore Sun)

There was a time in the city when it was deemed fashionable and even necessary to hire a company to spackle fake stones to the exterior of your home. One of the more famous companies that would do this for you was called Formstone. Like Babe Ruth, Formstone was born in Baltimore, and will forever be associated with our city. Patented in 1937 by L. Albert Knight, Formstone became so ubiquitous its name has become a catch-all for faux stone facades, the Kleenex of fake stone.

“You see it more and more … on better homes everywhere,” read a peer-pressuring ad for Formstone that ran in The Sun in 1950. The subtext being, the good people are doing this, why aren’t you?

“It was for people who wanted to make their house a castle,” said Joy Sushinsky, a realtor in Hampden. It was intended to make things look clean and uncluttered. Back then, she adds, it was also popular to remove trees in the name of urban planning and take out marble steps in the name of modernity.

Today, the success of the Formstone advertising campaign can be seen in East Baltimore and elsewhere in the city, where dozens of houses, at times practically entire blocks of homes are still encased in Formstone. Some even bear the original brass plaque advertising the stone.

“I don’t have to do anything to it at all,” said Rachel Holmes, who moved into her Formstone-clad rowhome on N. Caroline Street in 1987.

“It keeps the house warmer,” said Rachel’s daughter, Lisa Holmes, who sat with her on the front step. Such insulation was seen as a selling point for Formstone back in its heyday. Another ad from 1957 boasts, “When FORMSTONE is applied to your home, it waterproofs, insulates, stops leaky walls and assures all-weather protection for your comfort.”

Today, Sushinsky, the realtor, said she typically encourages homeowners to have it removed before selling their homes to improve the “curb appeal.”

“I’ve never seen a house look worse without the Formstone,” she said.

Stephen Huppaty of OzCorp Fine Builders said his company typically removes Formstone from about 20 homes a year. “It’s not extremely difficult to do,” he said. Usually, the underlying brick is in good shape, it just needs to be scrubbed and re-pointed. (OzCorp charges around $3500 to remove Formstone from a two-story rowhome.)

Huppaty, who is originally from Australia, sees so much of the stuff he suspects at one point there were incentives – a sort of “refer-a-friend” program whereby people got kickbacks if they could convince a neighbor to have it put on their house.

As recently as 2012, there was an effort to ban Formstone on new construction in the city. That proposal was dropped, according to Laurie Feinberg of the Department of Planning.

Today, the Commission for Historical and Architectural Preservation (CHAP) acknowledges that Formstone was a historically significant material, and one that had a signifiant visual impact on the city, said Eric Holcomb, CHAP’s director. “There is a debate as to whether that impact has been positive or negative,” he said.

Though CHAP has yet to determine whether new Formstone could be applied to historic property, it does not require Formstone to be removed in order to qualify for a tax credit. “We have approved of the repair of Formstone, and if you’re going for a tax credit… we don’t compel you to take that off.”

Sushinksy said she personally loves the old nostalgic quirk of the old Formstone.

“I own a rental property with Formstone on it, which I love, but everyone tells me I need to remove it,” she said.