From the vault: The annual Chincoteague pony swim

The annual pony penning at Chincoteague takes place this week, bringing an element of cowboy spectacle to the otherwise quiet island. 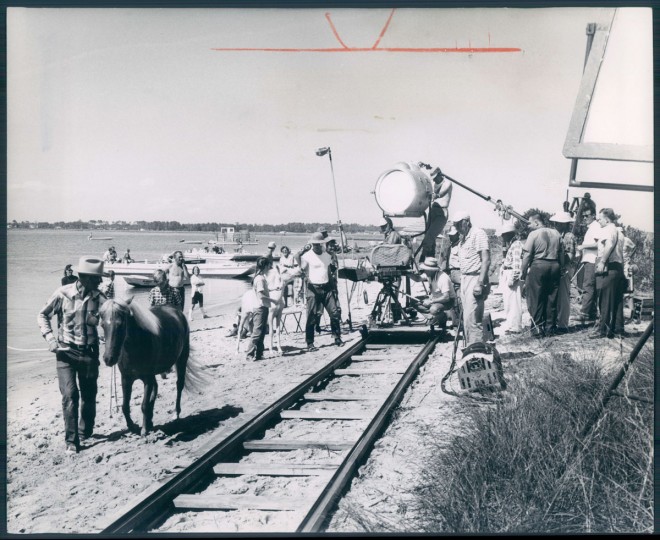 November 6, 1960 – CHINCOTEAGUE’S PONIES IN A MOVIE — Filming a scene on the beach. Only the principals were professional actors. Chincoteague and Accomac people were hired for other roles. Photo taken by Baltimore Sun Staff Photographer A. Aubrey Bodine. 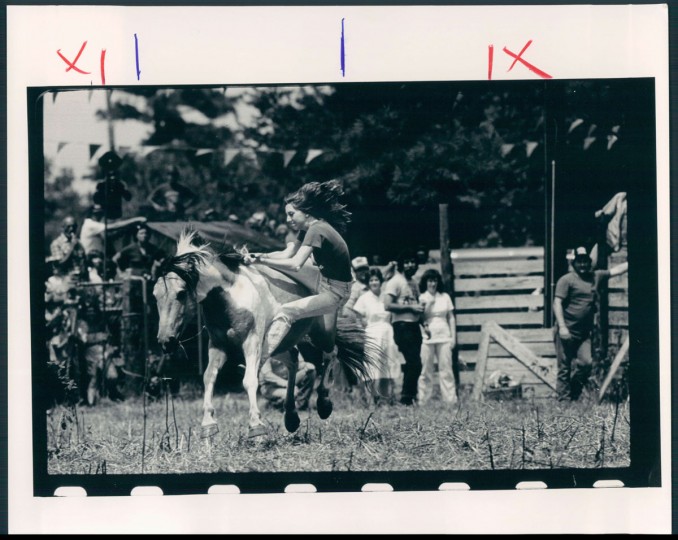 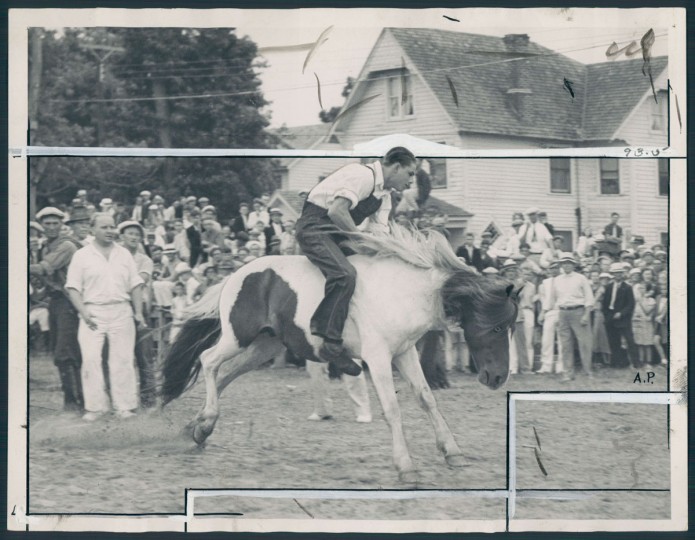 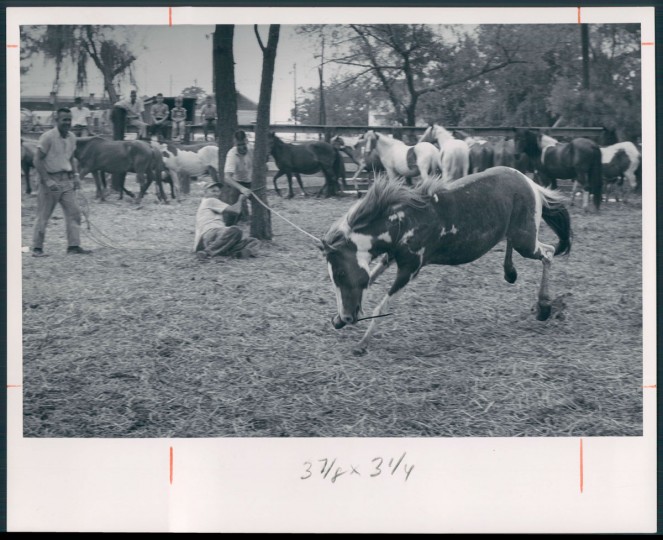 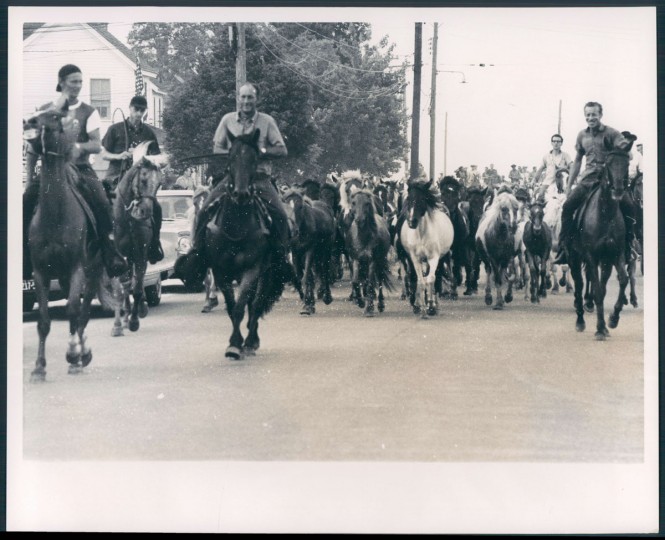 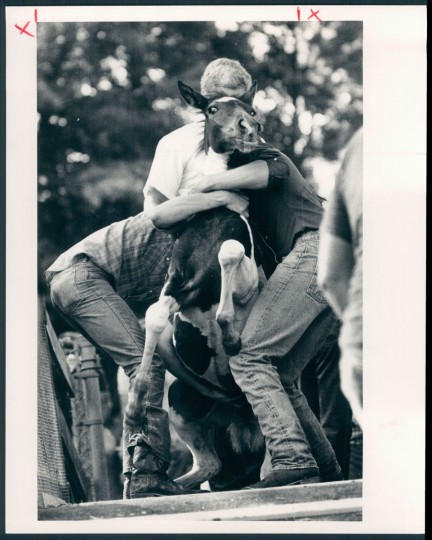 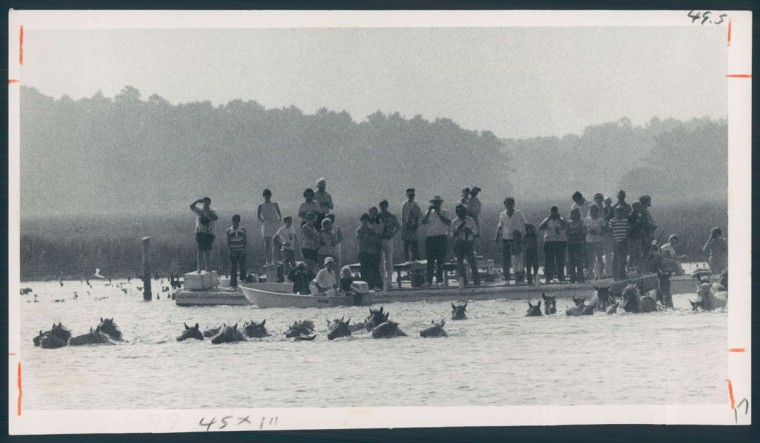 Ponies swim to Chincoteague Island as part of the annual roundup in July 1977. (Baltimore Sun archives) 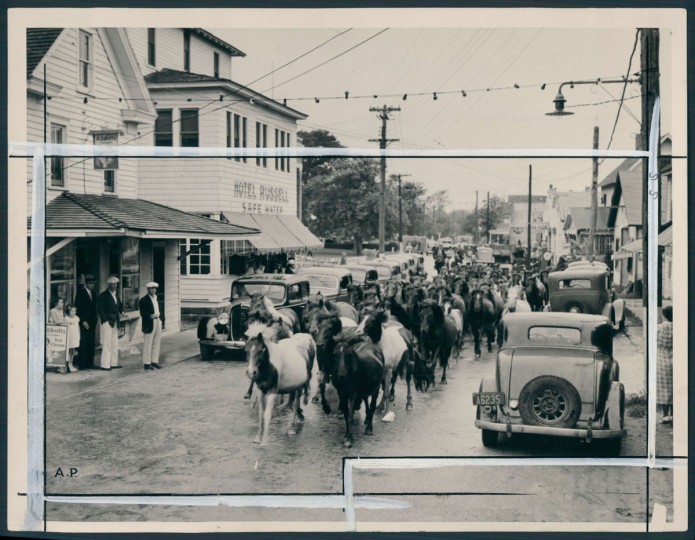 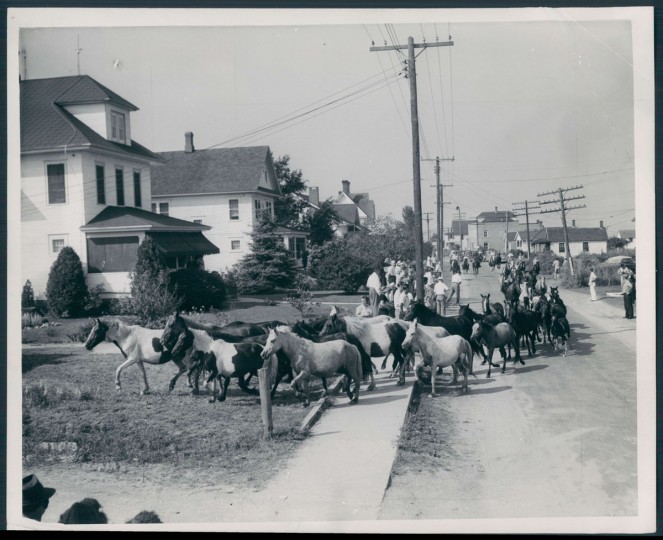 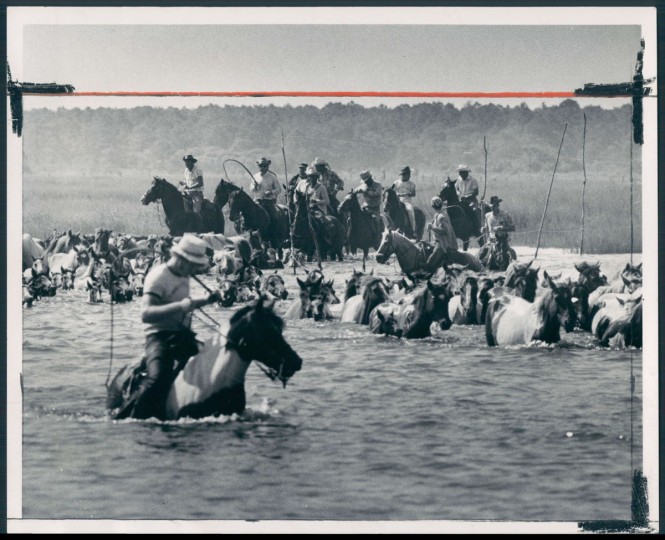 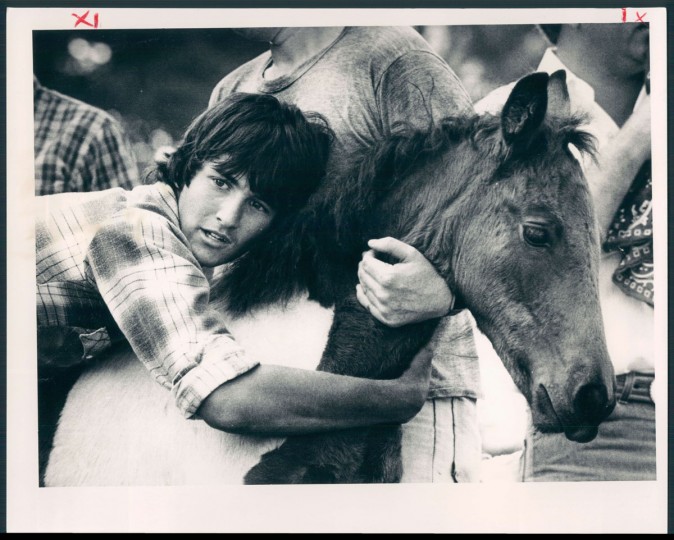 A member of the sales team comforts a nervous horse as it takes its turn on the auction block. Photo dated July 29, 1983. (Baltimore Sun archives) 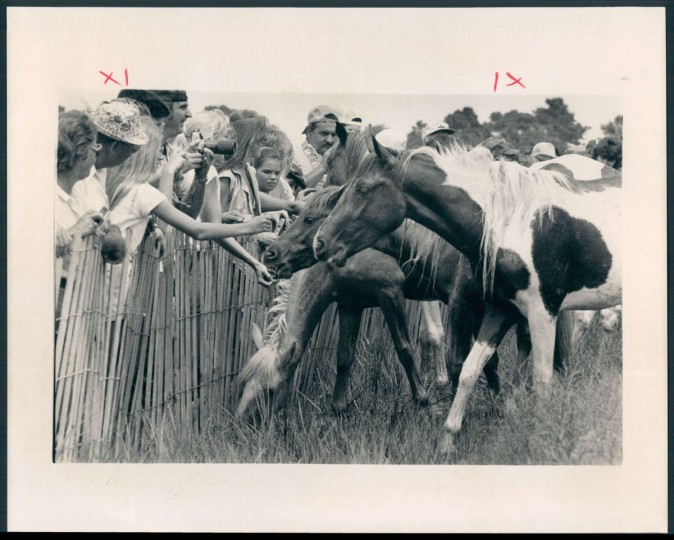 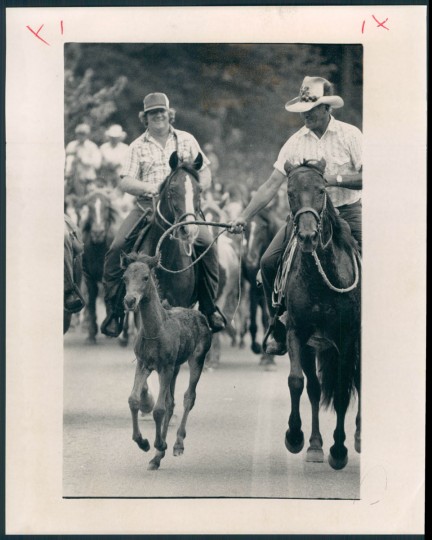 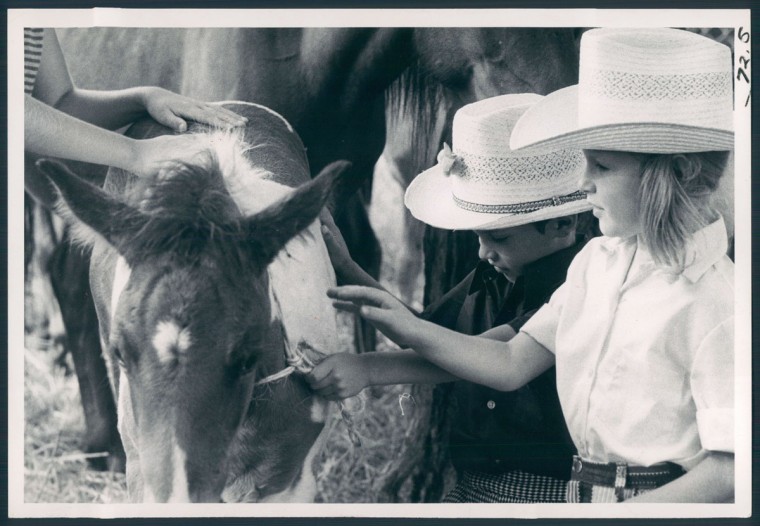 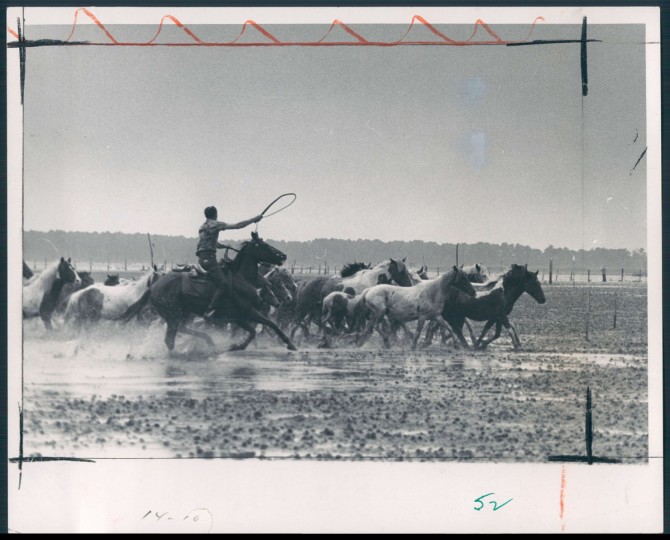 July 30, 1970 – Ponies being rounded up for their annual swim to Chincoteague. Photo by Paul Levin/Baltimore Sun 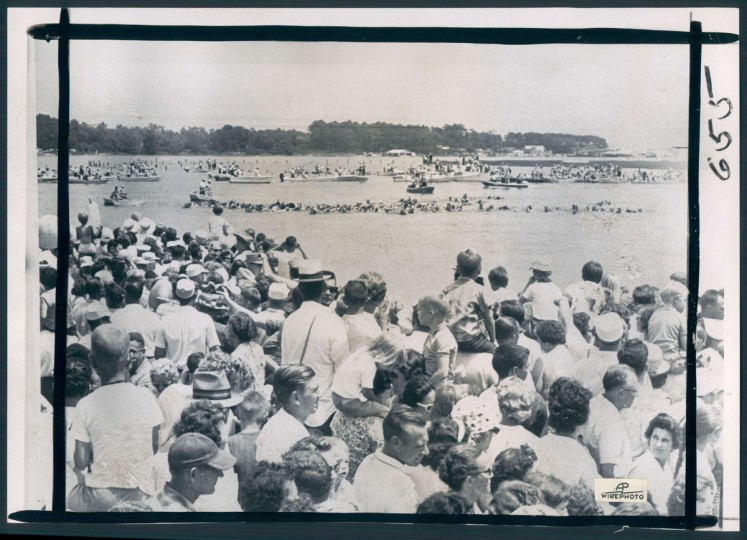 Ponies swim to Chincoteague Island as part of the annual roundup in July 1963. (Baltimore Sun archives) 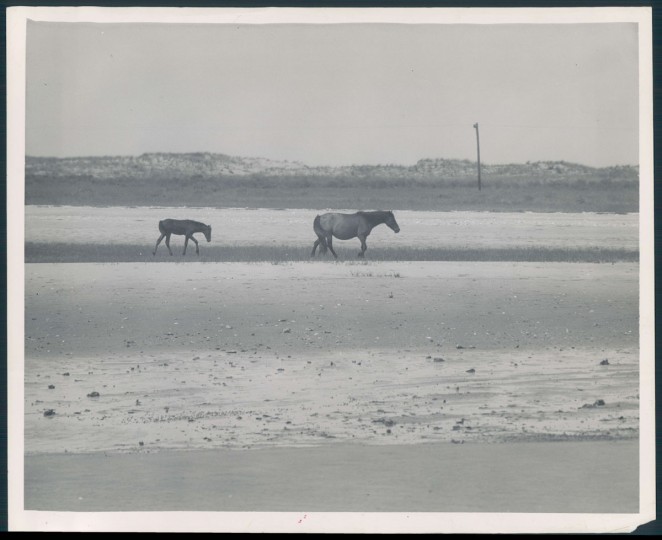 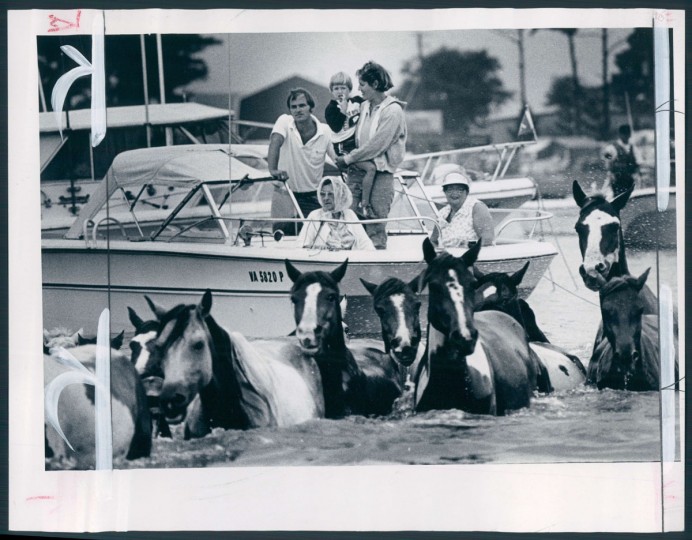 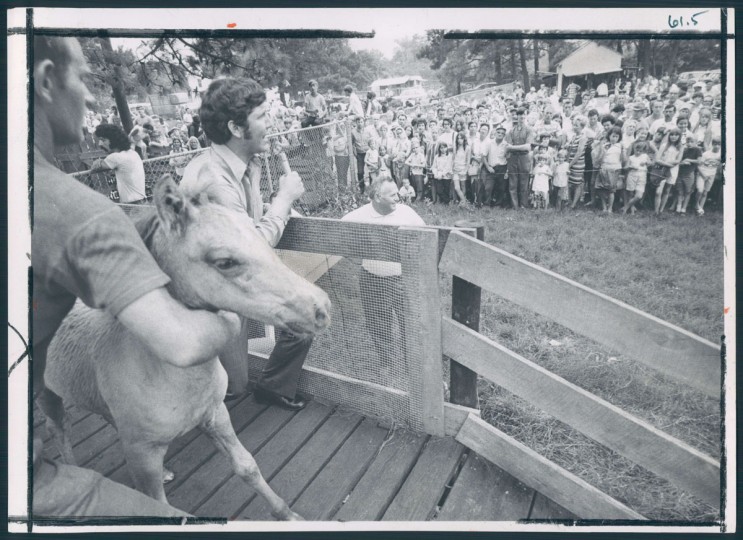 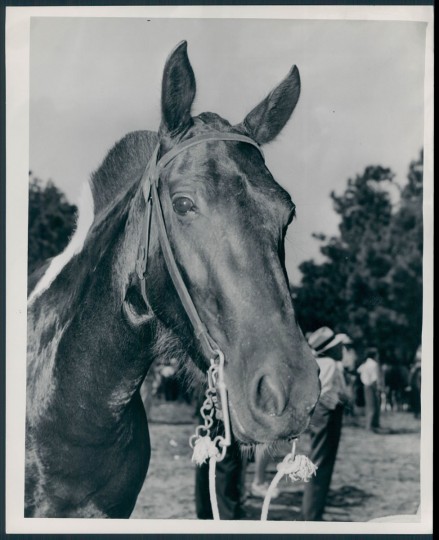 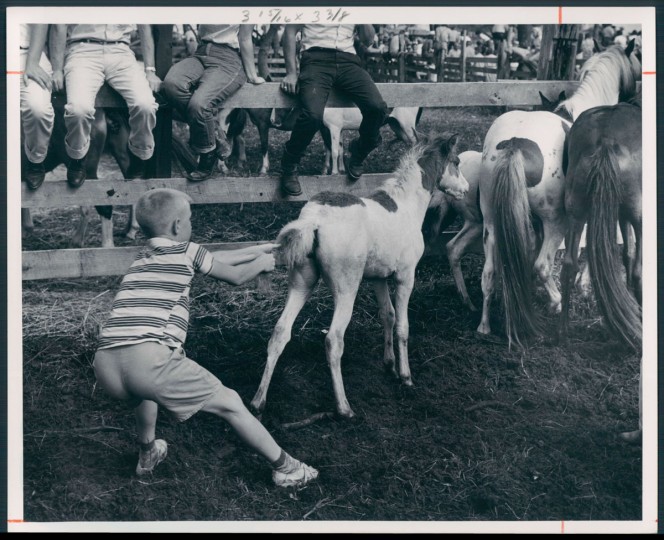 July 21, 1963 – CHINCOTEAGUE PONIES — This lad is trying to help gather ponies for the auction stand. Photo by Richard Stacks 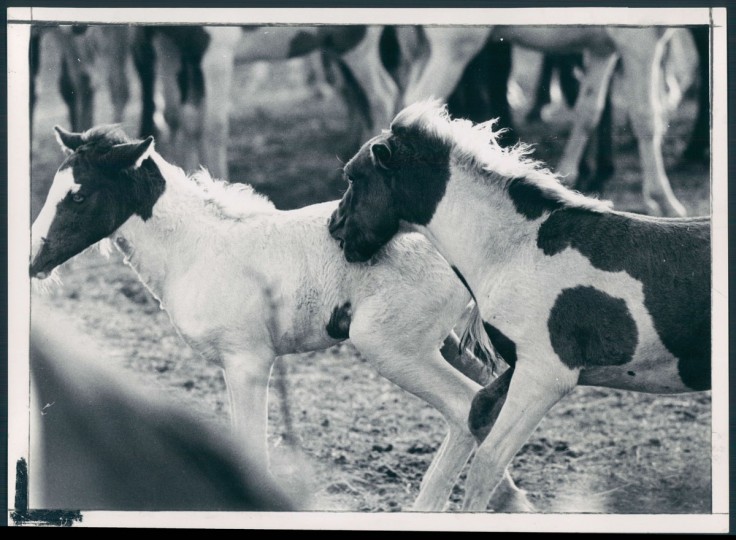 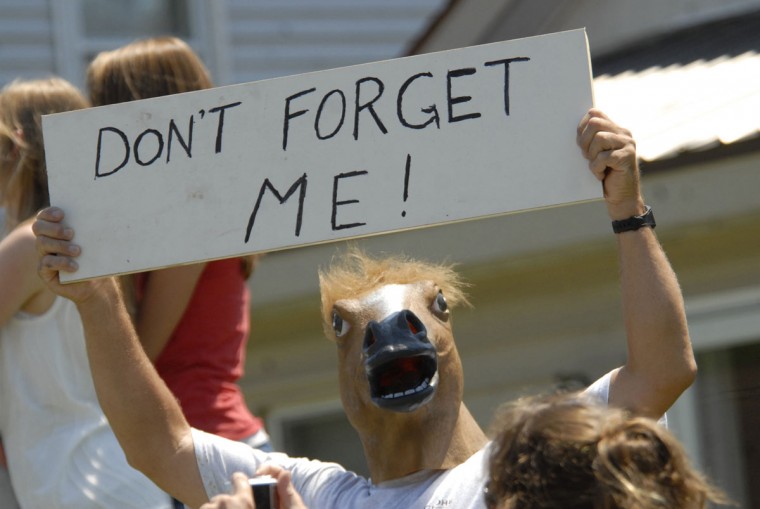 A man holds a sign asking to be rounded up with the Wild Chincoteague Pony herd while wearing a horse mask on the parade route following the 86th annual Chincoteague Pony Swim on Wednesday, July 27, 2011. Photo by Jay Diem/Daily Times) 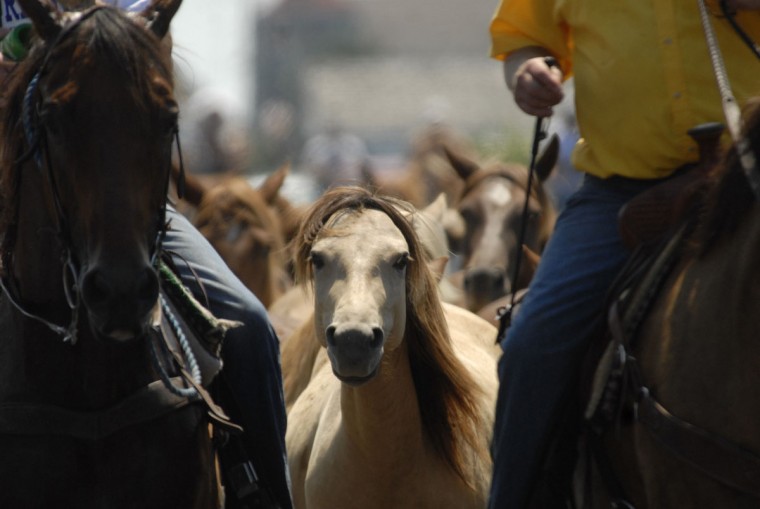 Chincoteague Ponies are lead into the corral after being paraded through the island streets following the 86th annual Chincoteague Pony Swim on Wednesday, July 27, 2011. Photo by Jay Diem/Daily Times 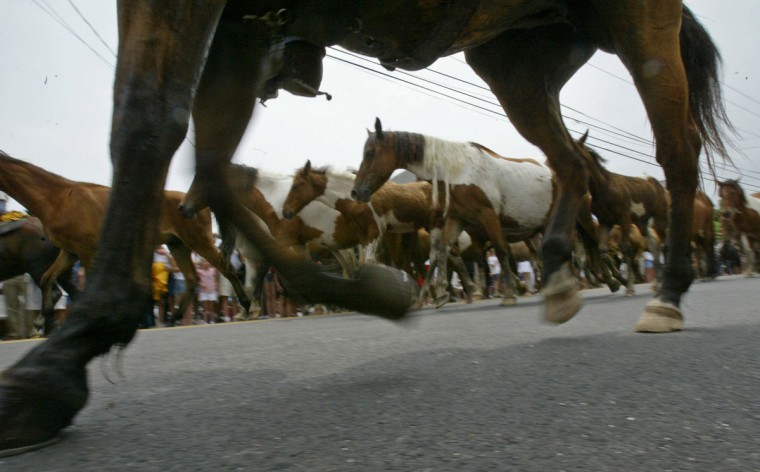 CHINCOTEAGUE, VA–7/28/04 After swimming across the Assateague Channel, the ponies are led through the streets of Chincoteague on their way to the Carnival Grounds, where they will be auctioned off on Thursday. Around 150 horses and ponies participated in the 79th annual Chincoteague Pony Swim Wednesday afternoon. In under ten minutes, they swam from Assateague Island to Chincoteague Island, where they will be auctioned off tomorrow. By CHRIS DETRICK/BALTIMORE SUN STAFF 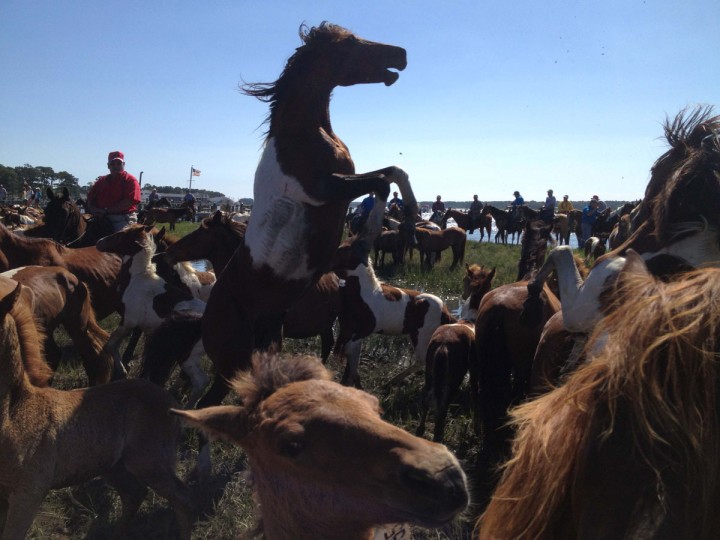 7/25/12 A stallion rears to protect his herd as several bands share a pen as they regain their strength following a grueling swim through Assateague Channel in the annual pony swim. 87th year of Chincoteague’s annual Pony Swim. The Chincoteague Pony Swim was made famous by Marguerite Henry’s “Misty of Chincoteague”. Photo by Karl Merton Ferron / Baltimore Sun Staff Photographer 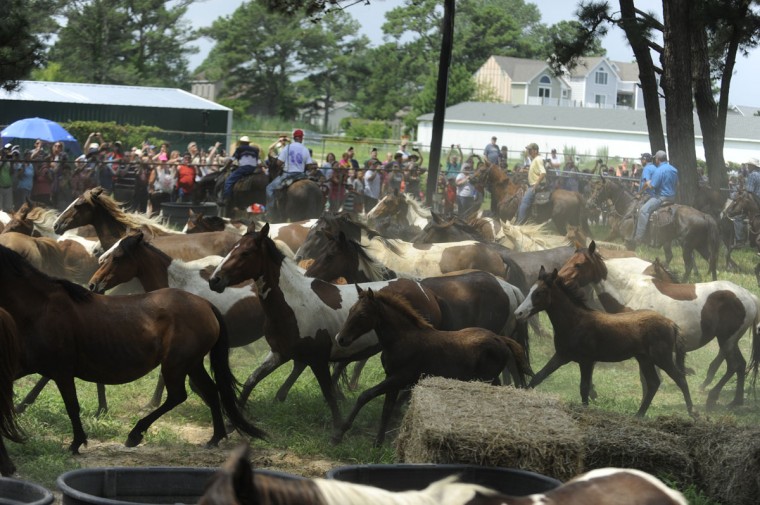 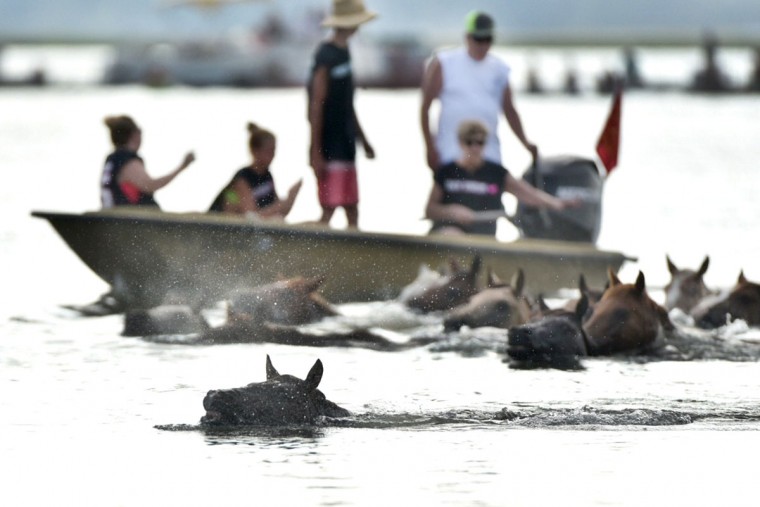 7/29/15 Chincoteague Island, VA. Saltwater Cowboys swim the ponies from Assateague Island to Chincoteague Island. The swim took place at “slack tide.” Slack tide is a period of about 30 minutes between tides, when there is no current. Photo by Kim Hairston / Baltimore Sun Staff Photographer 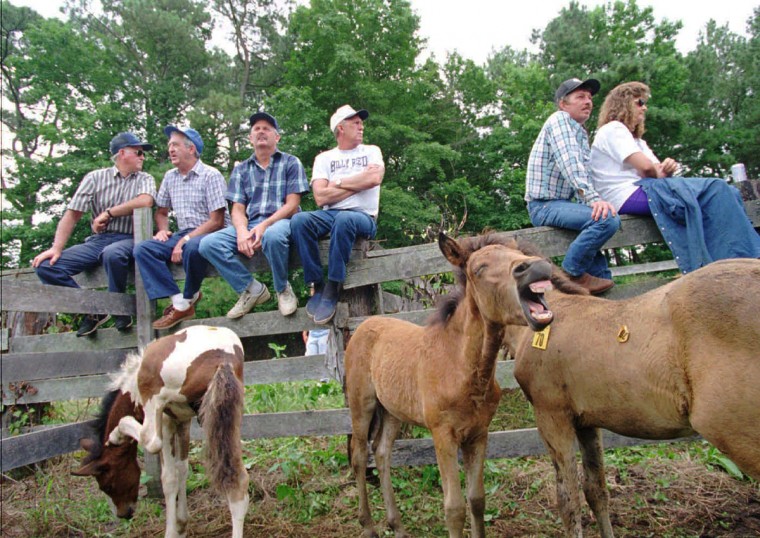 CHINCOTEAGUE, VA–JULY 28–A wild Assateauge pony neighs as it waits to be auctioned at the annual sale at the Chincoteauge fairgrounds. Sixty-two foals and five yearlings were sold at a total price of $63,000. Photo by Zana Briski/staff. 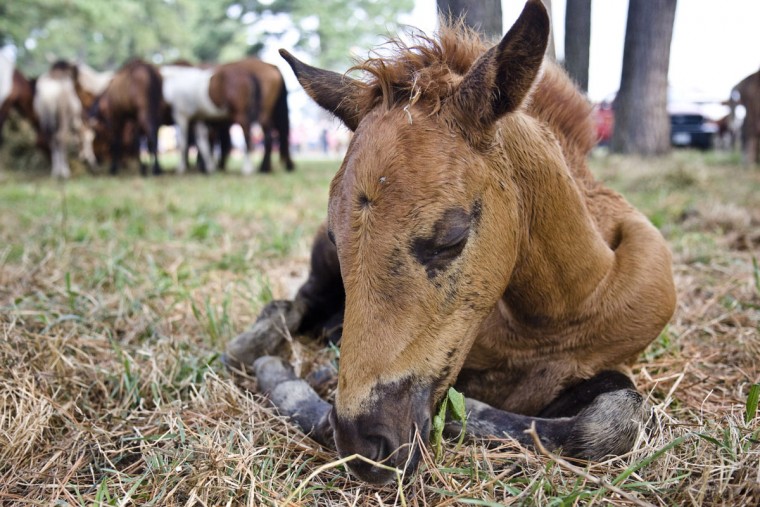 A foal sleeps in the holding corral after swimming across Assateague Channel and parading through Chincoteague, Va., during the 83rd annual Pony swim on Wednesday, July 30 , 2008. About 150 wild ponies are recuperating after the annual crossing of the 200-yard channel between Assateague Island, Maryland, and Chincoteague. Ponies are auctioned each year to raise money for the Chincoteague Volunteer Fire Company, which cares for the Virginia herd. (AP Photo/Virginian-Pilot, Adam Sings In The Timber)

Each year, hundreds of wild ponies on Assateague are rounded up by “saltwater cowboys” and forced to swim at low tide to neighboring Chincoteague Island. They’re then sold at auction – proceeds benefit the local fire department.

The annual pony penning has acquired mythological status with the help of the book Misty of Chincoteague, and subsequent film, filmed on the island. Though the reality of the pony-penning has been somewhat less romantic.

A correspondent writing under the byline “N.E.F.” covered the roundup for The Baltimore Sun in 1876, reporting, bluntly: “The pony-penning was not so interesting as former occurrences of the kind are represented to have been.” The horses, he wrote, were little better than “mongrels,” wild and interbred, with the exception of a few particularly beautiful specimens.

According to a 1911 story from The Sun, Uncle Jim Whealton, the island’s historian, then in his 90s, remembered hearing stories from his father about slaves being sent to wrangle wild ponies. This, he believed, was the origin of the practice of pony penning.

No one knows exactly where the wild ponies came from. A popular legend – and one repeated in Misty – tells that they were riding aboard a Spanish ship that wrecked nearby. However, the National Parks Service website refutes this theory, maintaining that the ponies are descendants of the horses of English colonists.