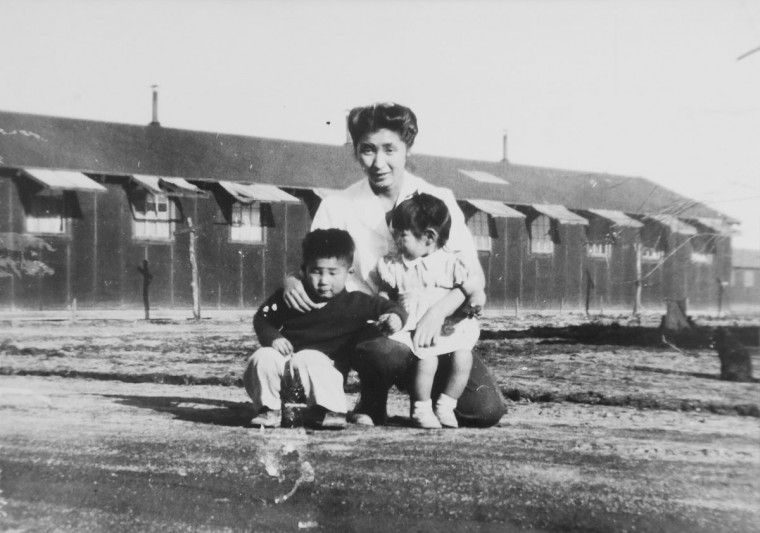 This 1945 photo provided by the family shows Shizuko Ina, with her son, Kiyoshi, left, and daughter, Satsuki, in a prison camp in Tule Lake, Calif. This photo was made by a family friend who was a soldier at the time, since cameras were considered contraband at the camp. Satsuki was born at the camp. (Courtesy of the Ina family via AP) 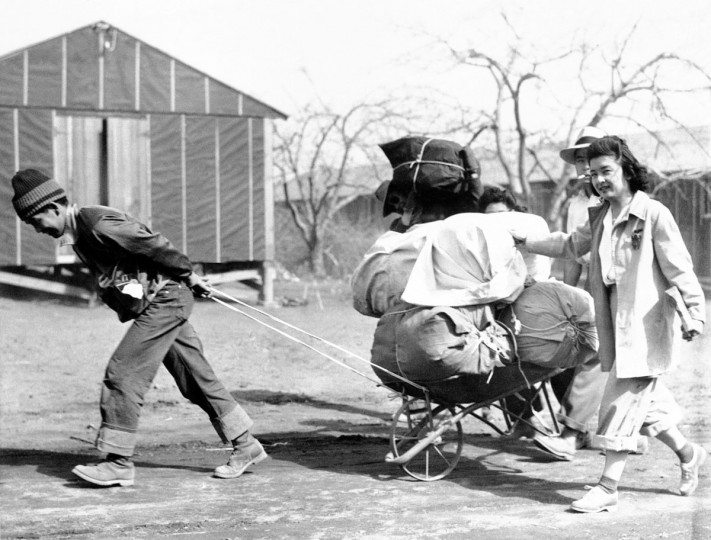 In this June 19, 1942 file photo, Japanese evacuees move into a war relocation authority center in Manzanar, Calif. Roughly 120,000 Japanese immigrants and Japanese-Americans were sent to desolate camps that dotted the West because the government claimed they might plot against the U.S. (AP Photo/File) 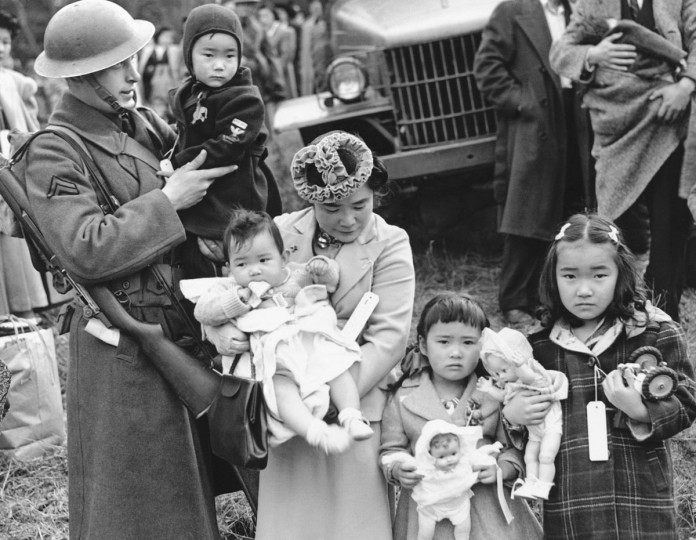 In this March 30, 1942 file photo, Cpl. George Bushy, left, a member of the military guard which supervised the departure of 237 Japanese people for California, holds the youngest child of Shigeho Kitamoto, center, as she and her children are evacuated from Bainbridge Island, Wash. Roughly 120,000 Japanese immigrants and Japanese-Americans were sent to desolate camps that dotted the West because the government claimed they might plot against the U.S. (AP Photo/File) 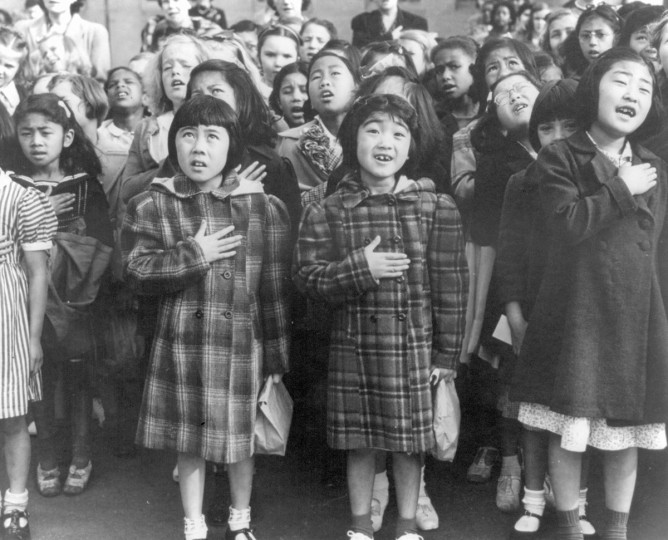 In this April 1942 photo made available by the Library of Congress, children at the Weill public school in San Francisco recite the Pledge of Allegiance. Some of them are evacuees of Japanese ancestry who will be housed in War Relocation Authority centers for the duration of the war. Roughly 120,000 Japanese immigrants and Japanese-Americans were sent to camps that dotted the West because the government claimed they might plot against the U.S. (Dorothea Lange/U.S. War Relocation Authority via AP) 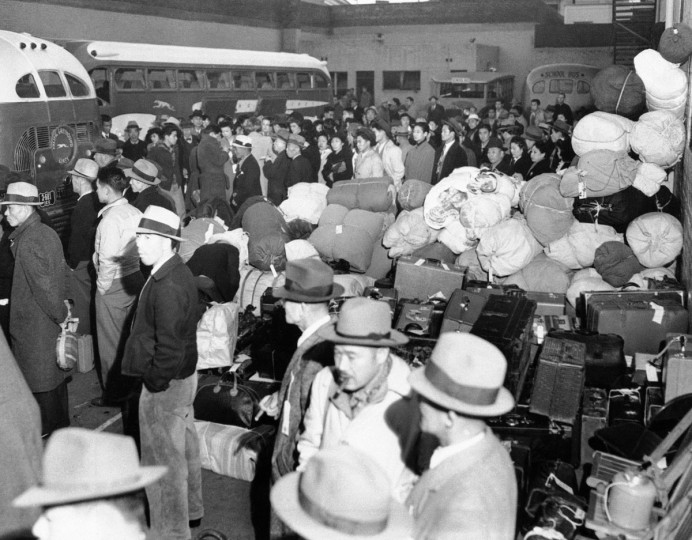 In this March 21, 1942 file photo, people of Japanese ancestry board buses in Los Angeles, for Owens Valley, 235 miles north, where the government’s first alien reception center is under construction. The nearly 100 people were skilled workers who will help prepare the camp for thousands of others to arrive later. Roughly 120,000 Japanese immigrants and Japanese-Americans were sent to desolate camps that dotted the West because the government claimed they might plot against the U.S. (AP Photo/File) 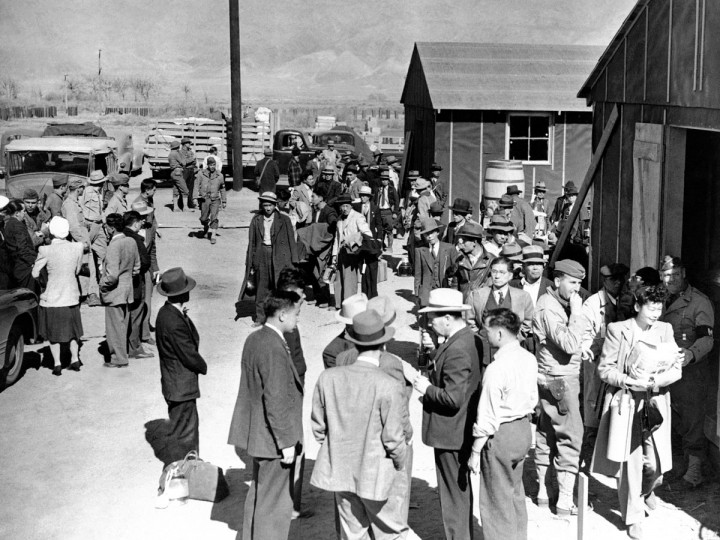 This March 23, 1942 file photo shows the first arrivals at the Japanese evacuee community established in Owens Valley in Manzanar, Calif., part of a vanguard of workers from Los Angeles. Roughly 120,000 Japanese immigrants and Japanese-Americans were sent to camps that dotted the West because the government claimed they might plot against the U.S. (AP Photo/File) 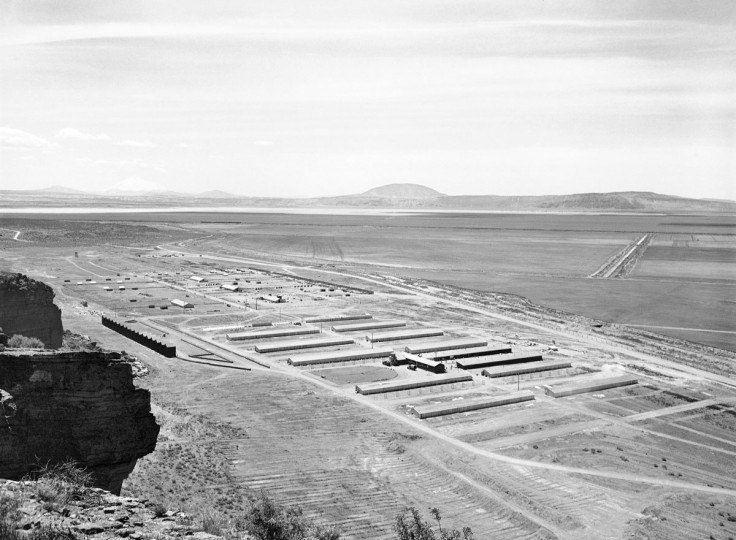 This May 23, 1943 file photo shows a Japanese relocation camp in Tule Lake, Calif. Tule Lake is at left, under Mount Shasta. Roughly 120,000 Japanese immigrants and Japanese-Americans were sent to desolate camps that dotted the West because the government claimed they might plot against the U.S. Thousands were elderly, disabled, children or infants too young to know the meaning of treason. Two-thirds were citizens. (AP Photo) 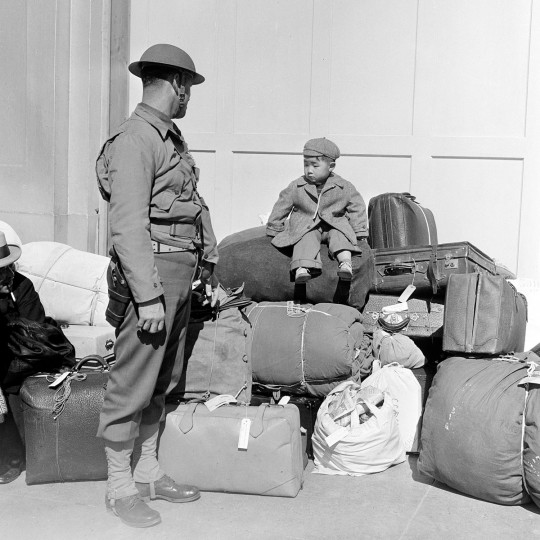 In this April 6, 1942 file photo, a boy sits on a pile of baggage as he waits for his parents, as a military policeman watches in San Francisco. More than 650 citizens of Japanese ancestry were evacuated from their homes and sent to Santa Anita racetrack, an assembly center for war relocation of alien and American-born Japanese civilians. (AP Photo) 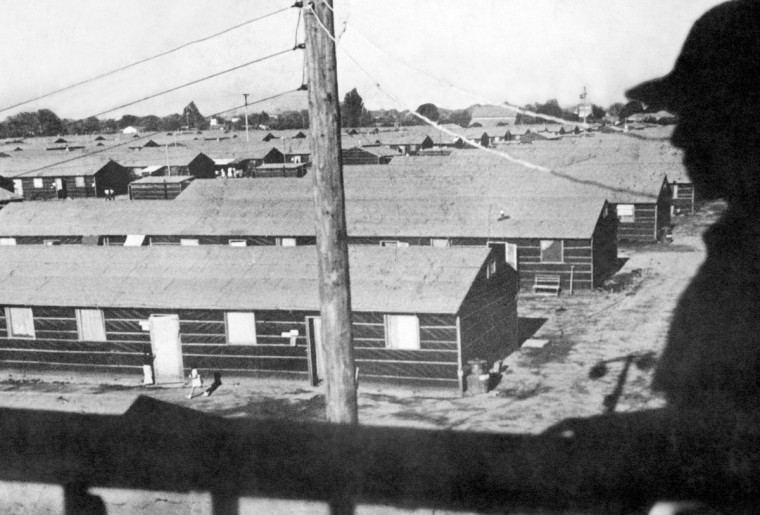 In this undated photo provided by the War Relocation Authority, armed guard overlooks barracks built in the middle of the racetrack at the Fresno Fairgrounds in Fresno, Calif. The assembly center, one of 13 built in Calif., was the first stop for detainees before they were sent to permanent internment camps. About 5,300 people were held at the center between May and October 1942. (AP photo/War Relocation Authority) 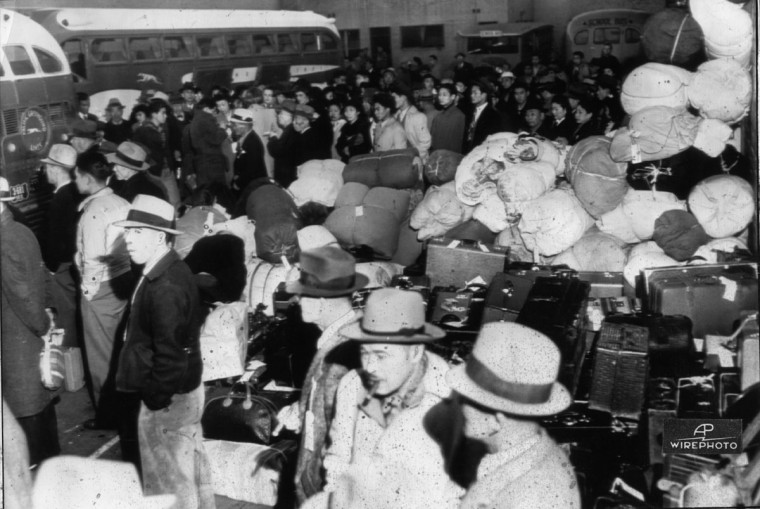 Los Angeles, March 21 – Exodus of Japanese Begins – Beginning the nation’s greatest forced migration, these Japanese today boarded buses which transported then to Owens Valley, 235 miles north of here, where the government’s first reception center is under construction. The nearly 100 Japanese who left today were skilled workers who will help prepare the camp for thousands of others to arrive later. 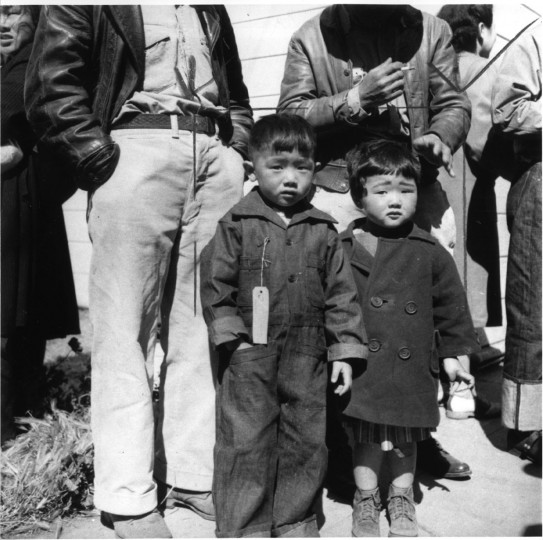 Two small children, a boy and a girl, as they appeared upon arrival at Turlock Assembly Center in California 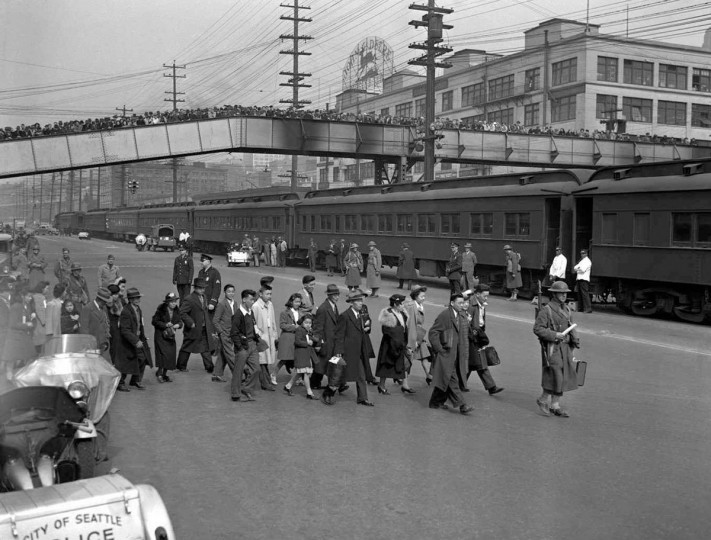 A group of Bainbridge Island Japanese-Americans under army escort at a Seattle dock where they were entrained for the Manzanar, CA internment camp. Friends and relatives, soon to be “evacuated,” bid them farewell. Photograph, March 1942. U6343436ACME/CREDIT: BETTMANN-UPI 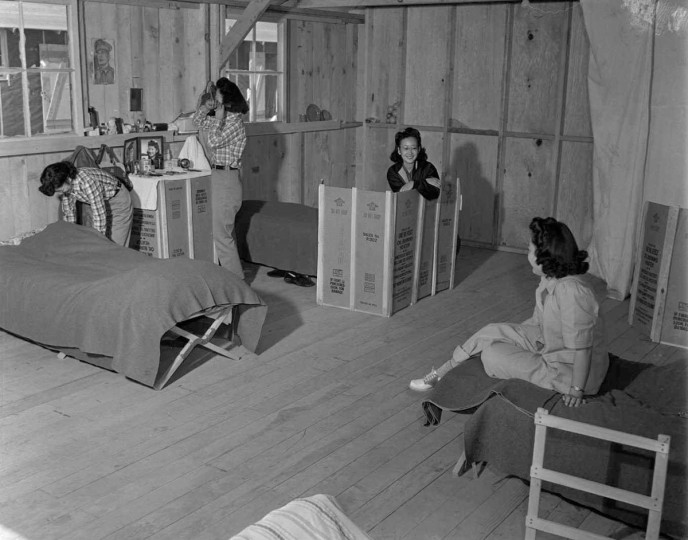 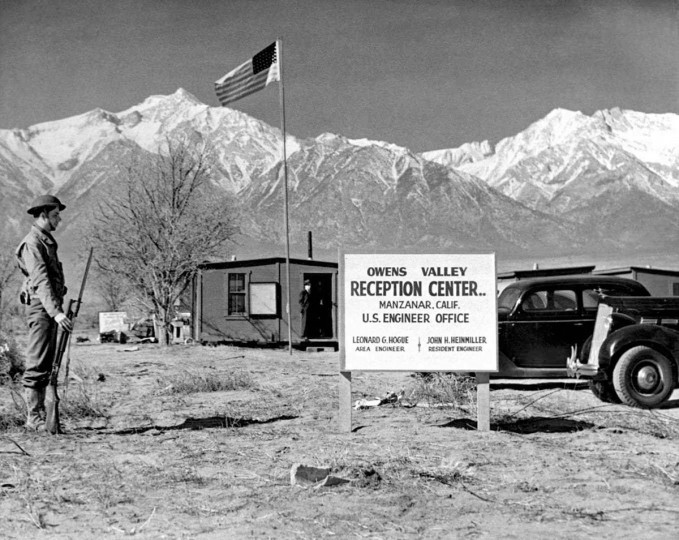 Adding a military air, a sentry paces the boundary line of the Owens Valley Reception Center at Manzanar, CA, where thousands of Japanese were taken to live for the duration of World War II. The function of the Army was limited to transporting the “evacuees” and guarding the center. Photograph, March 24, 1942. U642532 ACME/CREDIT: BETTMANN-UPI 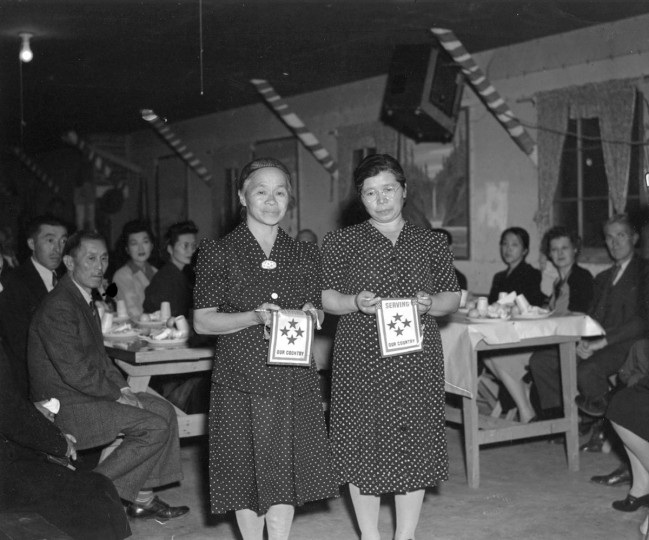 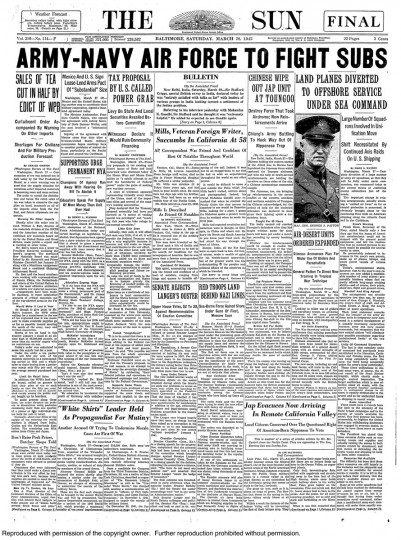 A Baltimore Sun headline from 1942, the year of FDR’s executive order which sent nearly 120,000 Japanese-Americans to internment camps. 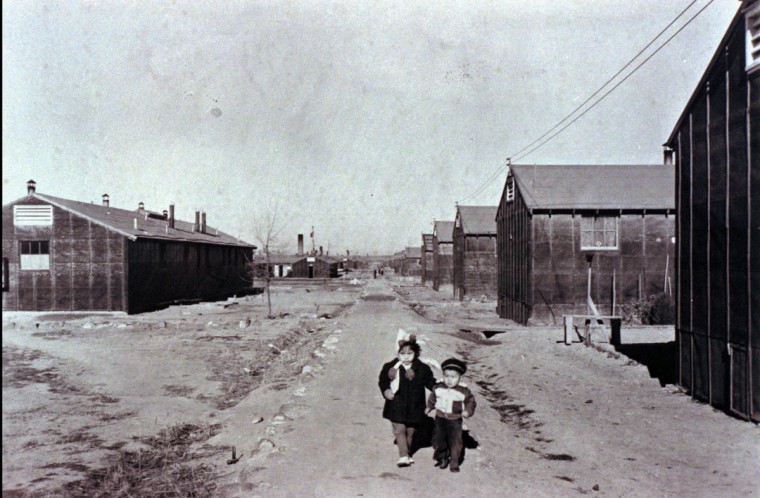 Two unidentified children walk alongside barracks housing at the Minidoka internment camp in Hunt, Idaho, circa 1943. Nearly 120,000 Japanese-Americans on the West Coast were forced into internment camps after Japan’s attack on Pearl Harbor in December 1941. (AP Photo/ho-Wing Luke Asian Museum)

Gene Oishi grew up in Guadalupe, Calif., his life split between two cultures: Japanese and American. He and his friends spoke Japanese and English. They went to see both Japanese movies and Hollywood movies at the local theater. Every year his family celebrated the Emperor’s birthday, shouting “Bonsai!”

His bi-cultural existence was threatened by the looming onset of war. He remembers his mother reading about the possibility in a Japanese magazine she had sent from abroad.

“I recall my mother whispered to herself, ‘I hope it never happens.’ I said ‘What?’”
She evaded for a minute before admitting that she was afraid a war would soon break out between Japan and America.

To a Japanese-American kid like Oishi, the prospect was “absolute horror.”

“The world was split apart for me,” he said.

“‘Get ‘Em Out—And Quickly,’ Californians Say of Japs,” ran a headline in The Baltimore Sun on March 16, 1942. Japanese people, it seemed, were situated all around areas of strategic military importance. It could just be coincidence, the paper acknowledged. But a grand Japanese conspiracy seemed more likely, given the anti-Japanese hysteria of the time.

One of those persons deemed a threat was Gene Oishi’s father, a farmer who’d come to America in 1903, trying to make some money. “He was something of a big shot in the Japanese community,” Oishi said. His status made him a threat in the eyes of the FBI, which kept a close eye on him.

He was arrested at 2 a.m. on the same day as the Pearl Harbor attack.

Later investigations have shown that the U.S. lacked any intelligence of Japanese espionage. There was no reason to believe that Oishi’s father, or any of the 120,000 Japanese people sent to internment camps during World War II, posed a threat to the United States. In the 1980s, President Ronald Reagan acknowledged it was a mistake; survivors were paid $20,000 in reparations to help compensate for their financial losses decades earlier. 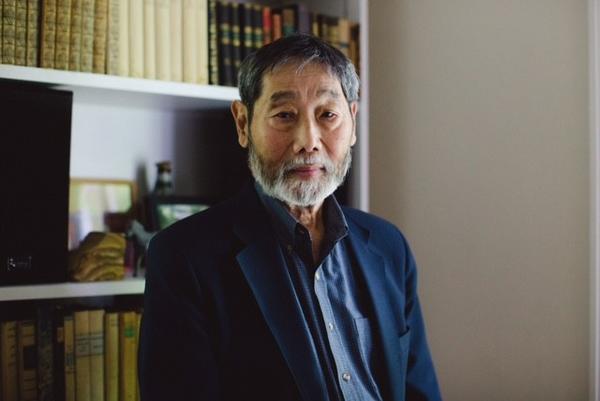 “That’s what war does to people’s thinking,” Oishi, 83, said over the phone from his home in Mount Washington.

A few months later came internment. “We used to call it ‘the evacuation,’” Oishi said. “That sort of sounds like it was being done for our own good.”

The family sold their belongings. The piano. The washing machine. They bought hiking boots and backpacks and duffel bags. Internees were limited to what the could carry; at home, the children practiced with the backpacks, testing their abilities. Oishi’s brother brought an illicit radio. Dentists brought medical equipment, and others brought tools that would eventually prove useful in the camps.

Oishi was 8 when he got to his first camp, 9 when they got to the permanent camp where he and his mother spent the next three years. (His father eventually was released from prison and allowed to join the family).

Oishi only later realized that the adults of his parents’ generation believed they were being sent to extermination camps, not internment camps – that they would be left in the desert to die.

“Their children, the American citizens thought no, such a thing couldn’t happen in America,” Oishi said. “We had learned about the Constitution and what a good country this is.”

“When I think about it, I must have sensed my mother’s fear.” Her hair – once shiny, raven black – turned white, seemingly overnight to her young son. Oishi thinks perhaps in reality, she just stopped dyeing it at the camp.

At the camp, each family had one room to live in. It was barely furnished, but internees made furniture with lumber found on the grounds. “Some very nice furniture was made,” he recalls.

“After everything settled down, the biggest problem was boredom,” he said. And, for a time, hunger. Food was scarce for the first year of internment, until the older American citizens were allowed to leave, so long as they pledged allegiance to the United States. Many volunteered for the Army after that. Others were drafted.

“If you ask a lot of people of my generation they will say as I said: ‘The camp wasn’t so bad, I had a good time there,’” Oishi said. “By the middle of the second year, we were growing our own food. The desert where we went could be very beautiful and the school was organized so they had sporting events — we played football and baseball. I don’t recall learning much.”

When his family returned home from the desert, vagrants had taken it over. There was food rotting, and a dead cat being eaten by maggots.

“The toilets were filthy, there were dried feces under the bathtub,” Oishi said. “It took us the whole summer to clean up the house, to paint it and make it livable.” His parents, once prosperous, had no source of income and pleaded for work with a labor gang.

Oishi eventually went to college and became a reporter, working for The Baltimore Sun. His writing brought him back in touch with an experience he’d long left buried.

In the 1980s, he took a month off from The Sun to write a freelance story for National Geographic about his experience in the internment camp. Oishi said National Geographic wanted a feel-good, happy story about the plucky Japanese immigrants who pulled themselves up by their bootstraps.

“They wanted this story of the model minority,” Oishi said. “The more people I talked to, the more I sort of explored my own feelings. I just couldn’t write this happy story.” He gave them what he felt was a more honest story.

National Geographic, in turn, chose not to publish the piece but paid Oishi $4,000. (The story eventually ran in The New York Times).

He eventually set out to write about his experiences in the camp. “I didn’t want it to be a pity book,” he said. “There’s much more to the Japanese experience. The more I got into writing about history, I slowly understood how many wells of pain that resided in me at one point.”

Oishi was having back pain on Sunday, but said he became so engrossed telling his story he forgot it was hurting.