Riding the rails at the Baltimore Streetcar Museum

Until 1963, streetcars zigged and zagged their way through the streets of Baltimore, carrying passengers from jobs in Sparrows Point to homes on Edmonson Avenue, or on day trips to the beach at Bay Shore Park. In the days before air conditioning, the “cool-off” ride program let Baltimoreans escape the heat of their homes by riding breezy streetcars — unlimited rides for one set fare. 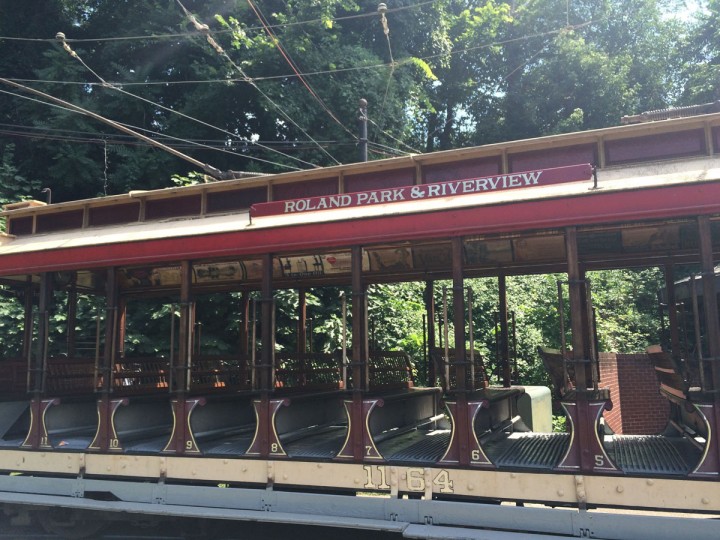 An open-air streetcar from 1902 at the Streetcar Museum on Jones Falls Road. (Christina Tkacik/Baltimore Sun) 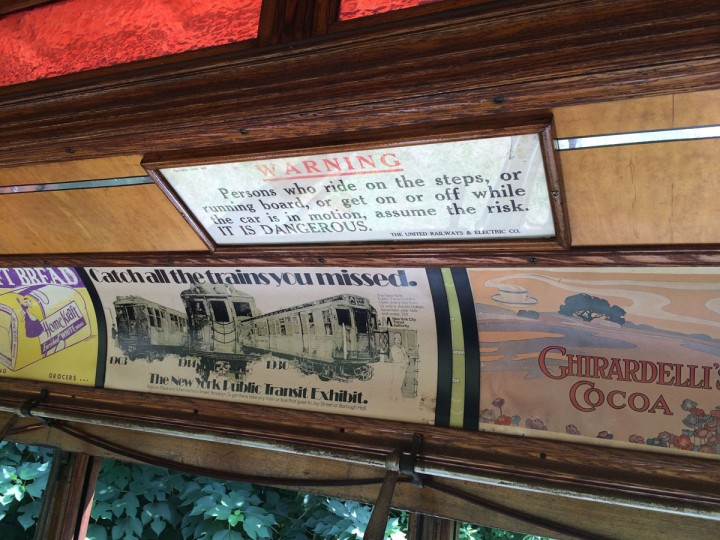 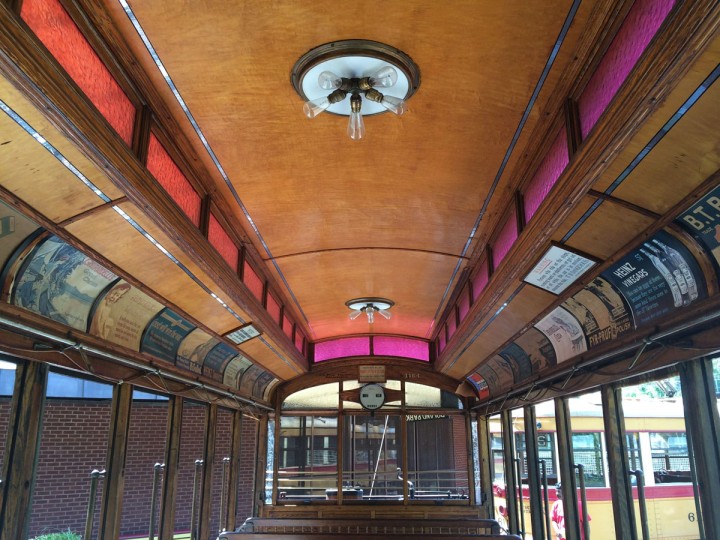 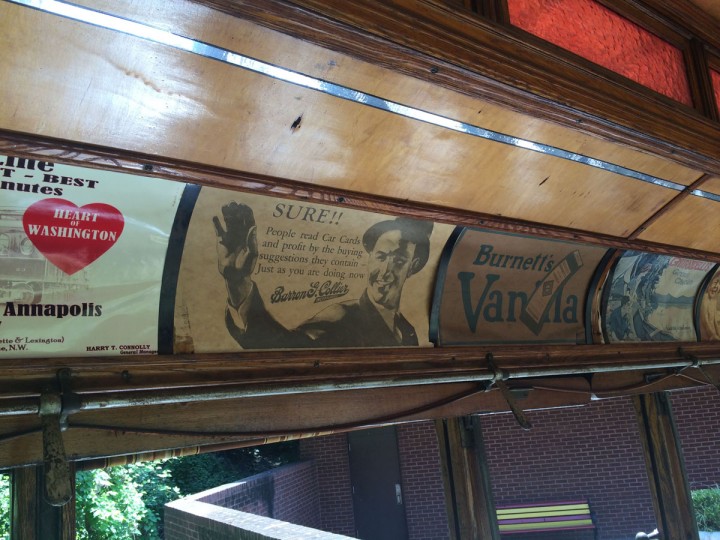 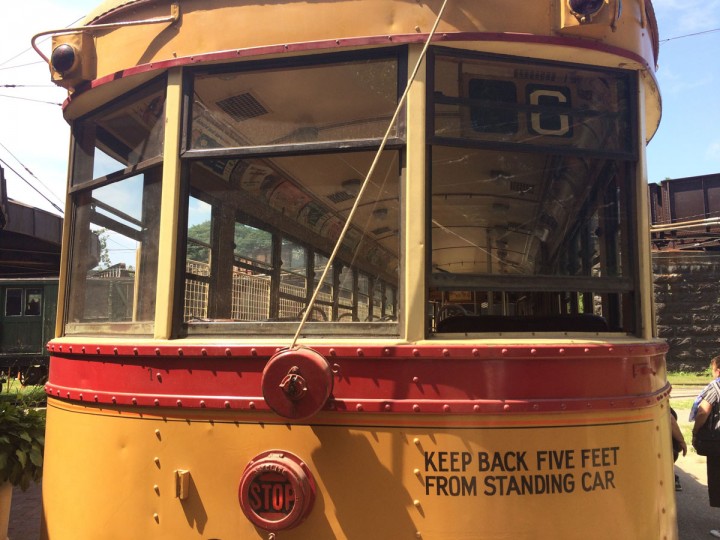 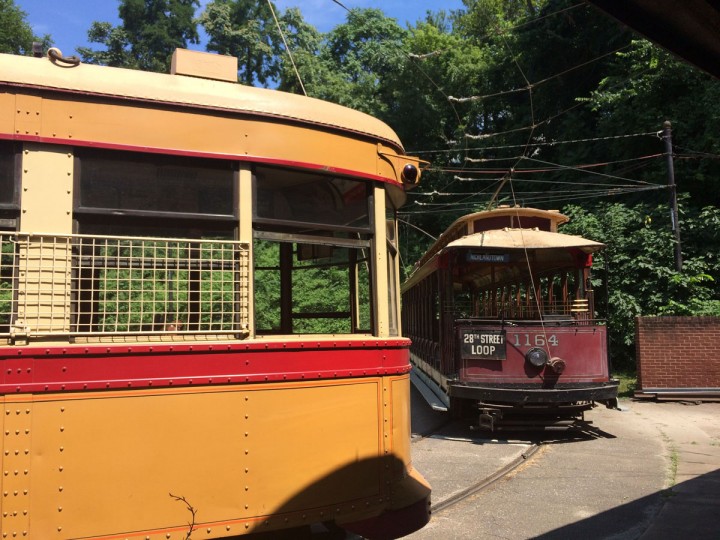 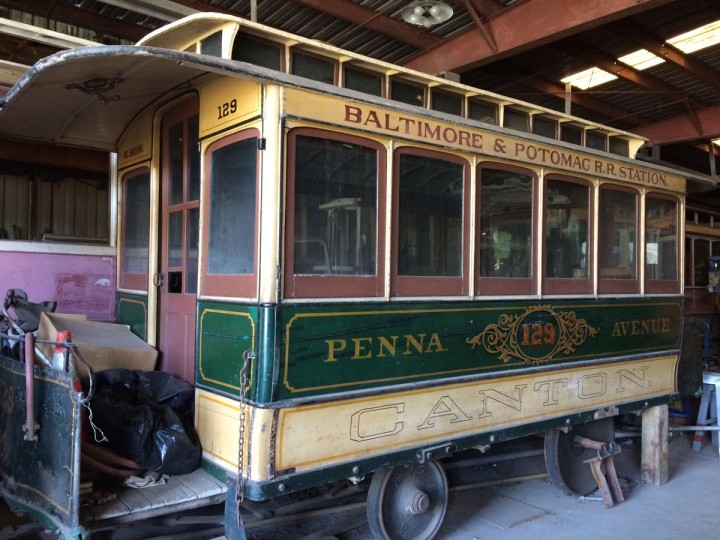 The garage at the Streetcar Museum on Jones Falls Road is a train enthusiast’s delight, featuring gems like this car, originally pulled by horses. (Christina Tkacik/Baltimore Sun) 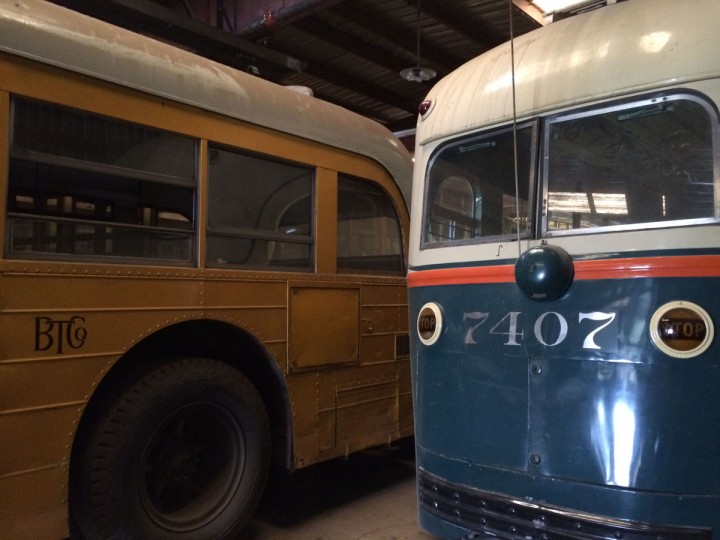 The Streetcar Museum’s holdings include the 7407, pictured right, which was the last streetcar to run in Baltimore in November, 1963. Jerry Kelly, who now works at the Museum, rode the train from 6 pm til 6 am on its last hours of operation. (Christina Tkacik/Baltimore Sun) 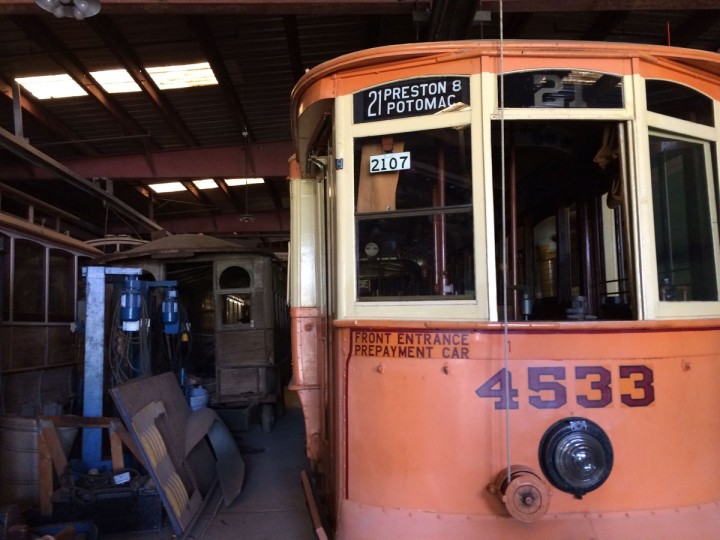 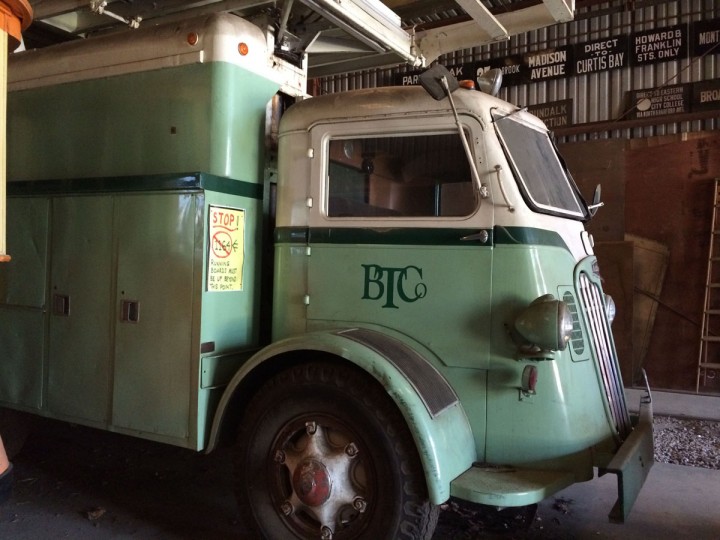 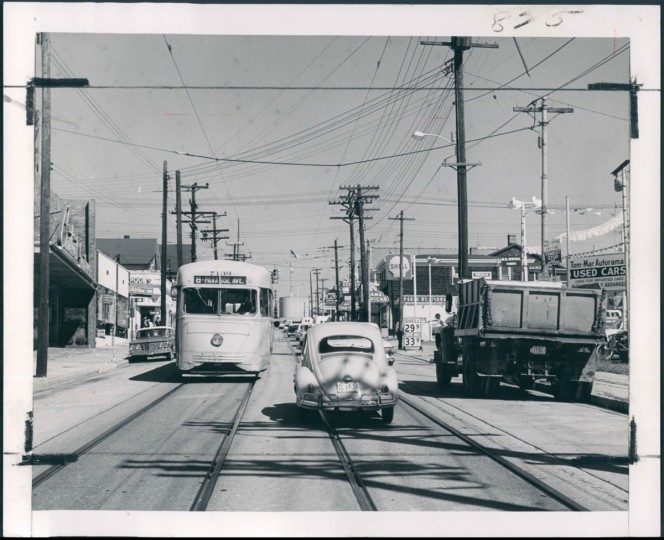 October 23, 1964 – YORK ROAD – A VANISHING SCENE — Number 8 streetcars still are a familiar sight in Towson. Soon they will be replaced by buses. Photo by Sun Photographer Robert Kniesche. 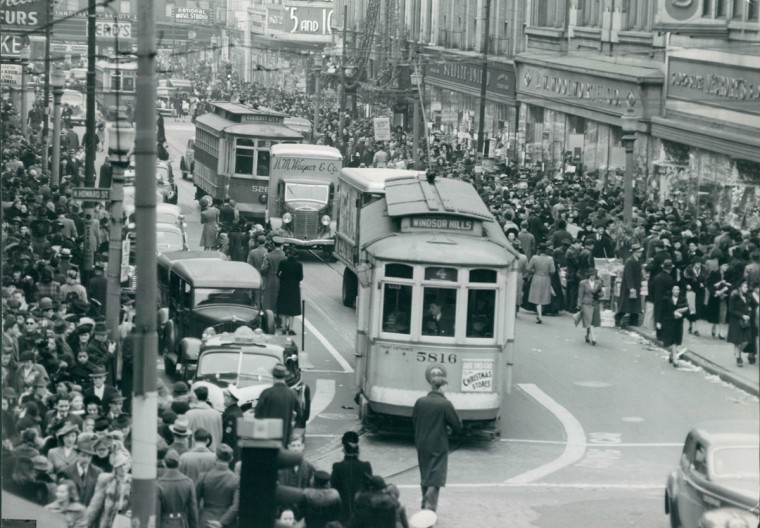 The Baltimore streetcars were discontinued in 1963. (Baltimore Sun) 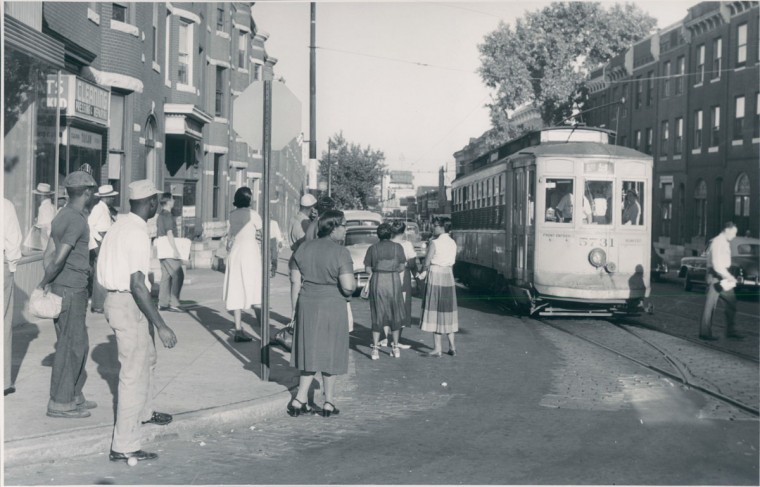 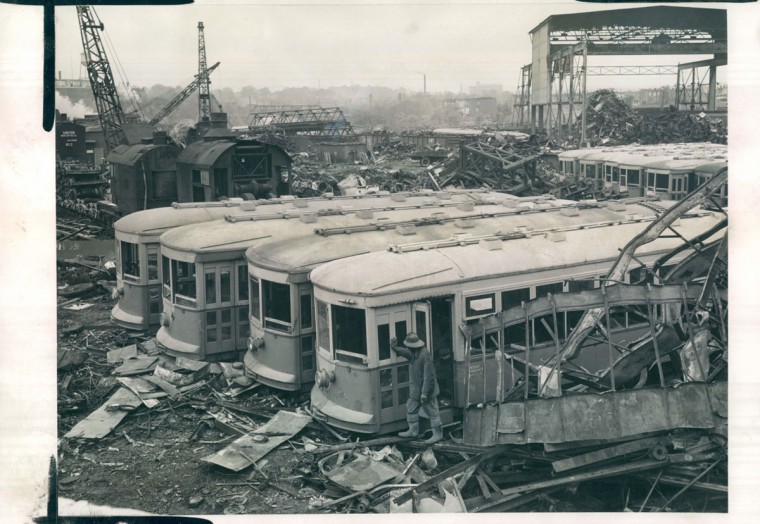 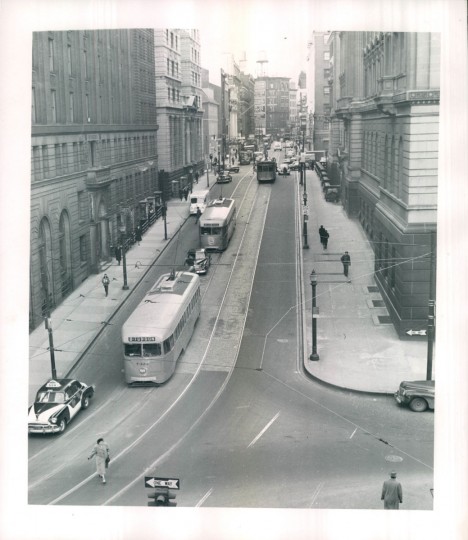 January 30, 1952-Looking West on Fayette Street from Calvert Street. Photo shows streetcars running at the time after the strike. Photo by Sun photographer Frank A. Miller. 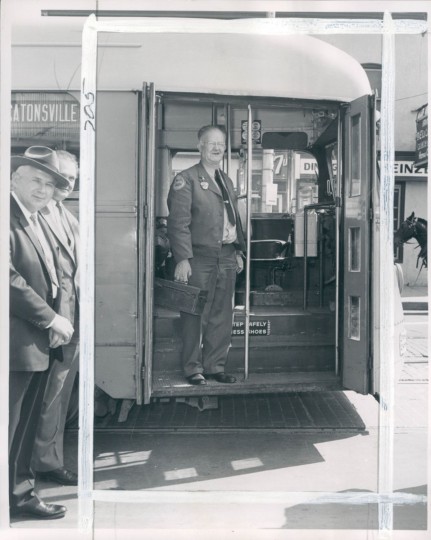 April 30, 1958 – NOTHING HAPPENS — William J. Moxley, motorman on the Baltimore Transit Company’s No. 8 line for 45-years, has traveled approximately 140,008,000 miles an he claims nothing unusual ever happened. Photo taken by Sun photographer. 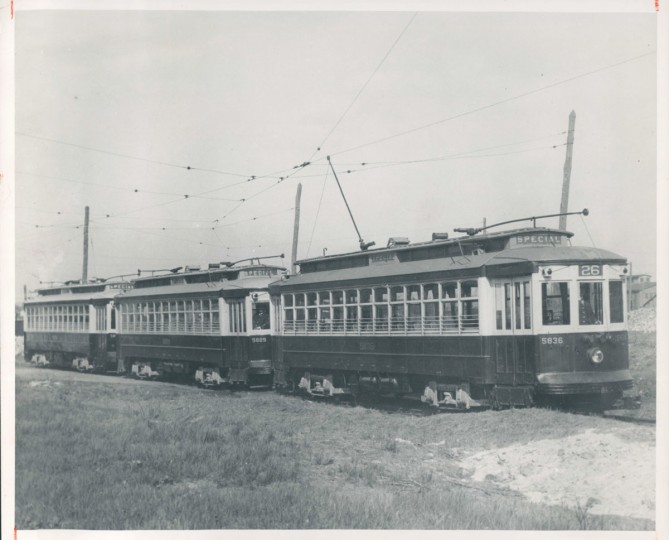 These cars, known as Red Rocket cars, carried workers to and from Sparrows Point during WWII. (Baltimore Sun) 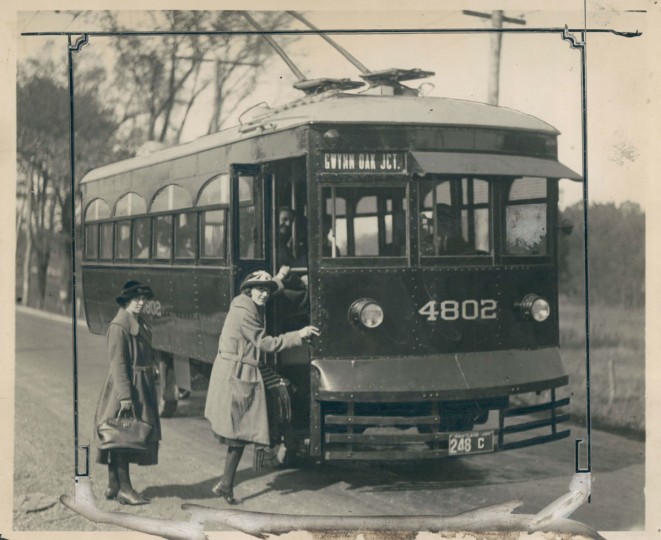 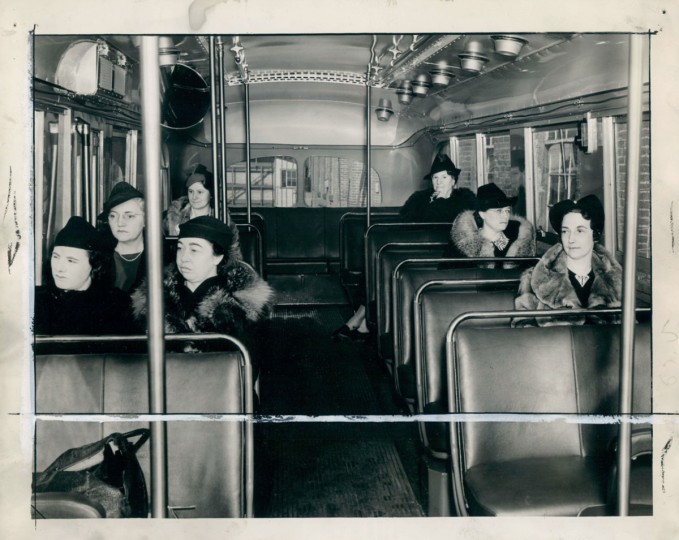 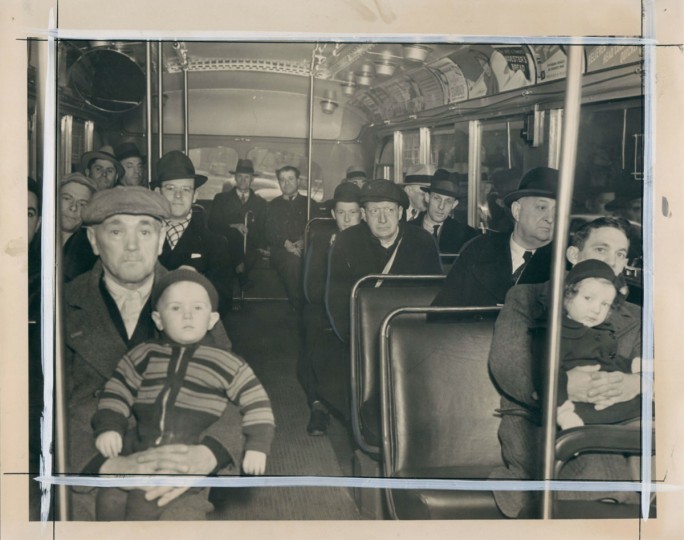 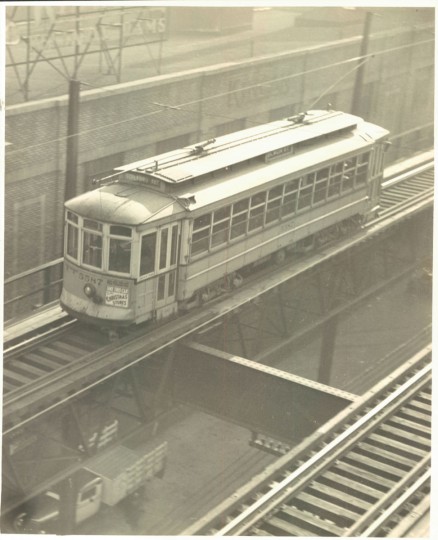 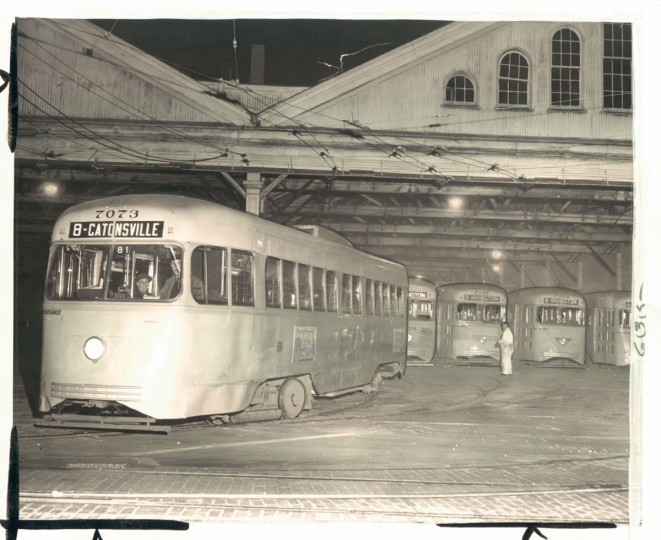 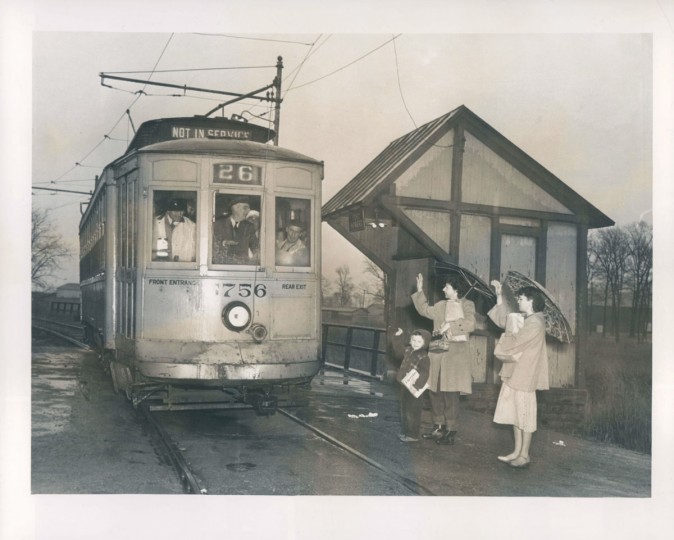 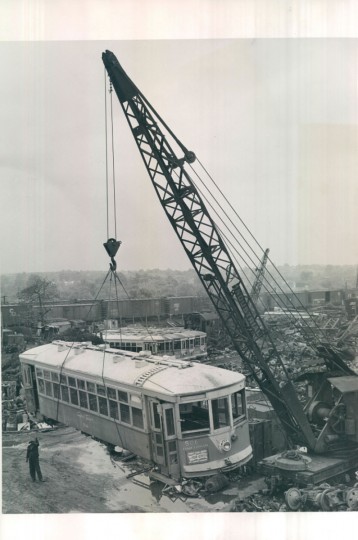 May 24, 1950 – STREETCAR GRAVEYARD — Streetcars that have outlived their usefulness are being broken up at the scrap yard of the United Iron and Metal Works. The cars are from the Capital Transit Lines in Washington. Seventy of them are being broken up for scrap. Photo by Joseph DiPaola

“Welcome to my world,” says Jerry Kelly, 83, as we climb aboard the 7407, the last streetcar to ever ride in Baltimore. Though it once maneuvered along the tracks of Baltimore, today it’s parked in a dimly-lit garage at the Baltimore Streetcar Museum, along with a slew of its streetcar cousins, some of them dating back to the early 1900s.

Kelly sat in this exact same train on an evening in November 1963, the night the last ever streetcars ran in Baltimore. Along with some of his friends, he climbed on board at 6 pm on a Saturday night, and disembarked at 6 am the following morning. They wanted to be the last to ever ride Charm City’s streetcars. “It’s you know, bragging rights.”

Kelly’s lifelong fascination with streetcars began when he was just an “ankle biter” of age five or six in West Baltimore. In the evenings he would walk down to Edmonson Avenue, notebook in hand, and wait for his father to come home from his job downtown at Baltimore Gas and Electric. While he waited, Kelly wrote down the numbers of all the trains that passed until the one carrying his father arrived, and they would walk home together.

“Don’t ask me why, but I did that religiously.”

In his teens he spent Saturday afternoons riding streetcars from one end to another. He’d go to the movies, then hop on a streetcar. “And I’d ride around all afternoon, just follow my nose and see where it goes.”

In those days you could travel from Ellicott City, west of the city, to Bay Shore Park, south of Sparrows Point, and spend a day at the beach. Or maybe you’d take the line from Towson, and after a few transfers, wind up at the Patapsco River. A streetcar map of the city from 1929 calls to mind a diagram of human arteries, blood flowing to capillaries, streetcars carrying people from place to place.

As a teen, Kelly he realized he wasn’t the only one who loved streetcars: there were plenty of enthusiasts around the city, people like George Nixon, who later became the founder of the Streetcar Museum. In the 1950s, they worked to ensure the preservation of old wooden streetcars as they were phased out of use. Eventually they acquired a spot of land for the museum – near Lake Roland. However, they later had to move to their current location on Jones Falls Road.

On a recent Wednesday morning, a school group had arrived to the Streetcar Museum to hear volunteers tell tales of what it used to be like in the olden days. A guide tells the children about the city’s old “cool-off” ride program, which ran in the 1930s and 1940s, and allowed people to escape the heat of their un-airconditioned homes by riding the streetcars — one fare could buy unlimited rides, back and forth, up and down the lines, from 7pm til 1 am.

The kids aren’t much for the stories — attention spans waver in the summer morning, and stories of the past are abstract. But magic takes over when they line up to climb aboard the streetcars, lovingly restored by museum volunteers. An open-air car from 1902 has been refashioned to be able to ride along the train tracks by the museum, where the Maryland and Pennsylvania Railroad used to pass. Their wonderment is palpable when the “conductor” volunteer demonstrates how the benches that flip to allow passengers to switch what side they’re facing when the train changes direction.

What is it about streetcars that makes them so special? For Kelly, the streetcar represented security. “Streetcars have a sense of stability,” he said. While a bus route can change, a streetcar line is more enduring.

“It was sad,” he says, Kelly says, of riding that last streetcar in 1963. But not too surprising. “There’s all kinds of conspiracy theories, stories about this, stories about that,” he says. “They were probably true, but I think it was a matter of socioeconomic change. It’s something that happened. Would you buy a car today that had a clutch?”