With the sighting of the crescent moon, Muslims mark the end of the holy month of Ramadan, and of dawn-to-dusk fasting, and the beginning of Eid al-Fitr. The festival, which typically starts with prayers and can include parades, family reunions and other gatherings, is a time of thanksgiving and reflection. 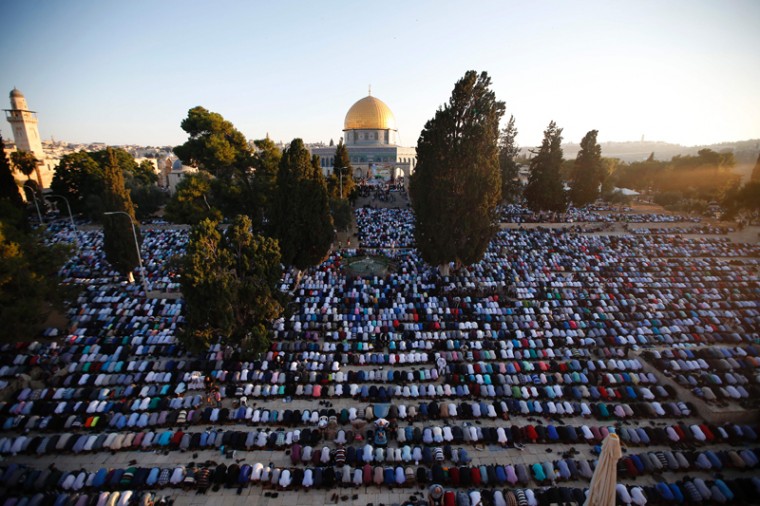 Palestinian Muslim men perform the morning Eid al-Fitr prayer near the Dome of Rock at the Al-Aqsa Mosque compound, Islam’s third most holy site, in the old city of Jerusalem on Wednesday. Muslims worldwide celebrate Eid al-Fitr marking the end of the fasting month of Ramadan. (AHMAD GHARABLI/AFP/Getty Images) 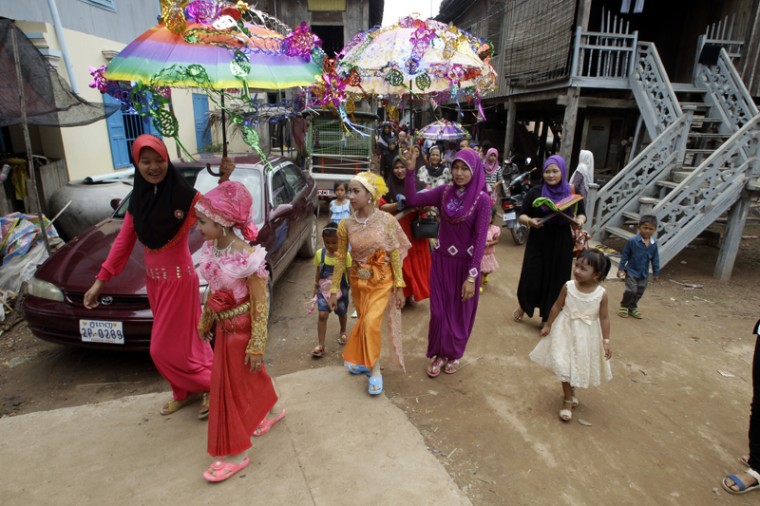 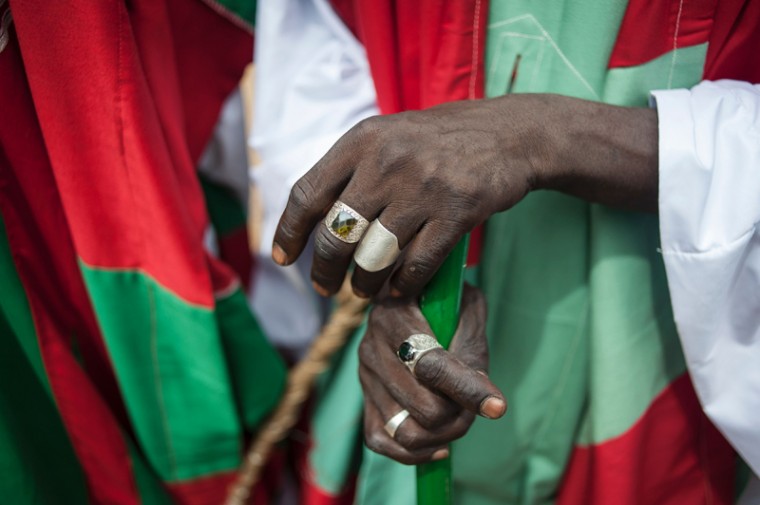 Rings are worn on the hands of a member of the Emir royal guard Wednesday during the Durbar Festival. Kano is Nigeria’s largest Muslim city and celebrates Eid al-Fitr with the Durbar festival, an event that sees a parade through the streets of the city on horseback accompanied by musicians. (STEFAN HEUNIS/AFP/Getty Images) 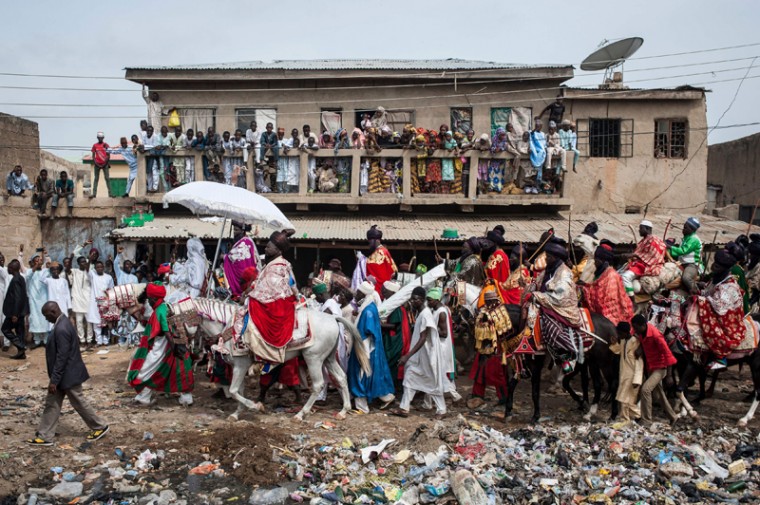 The Emir of Kano, Muhammadu Sanusi II, rides a horse as he parades with his entourage and musicians on the streets of Kano, northern Nigeria on Wednesday, during the Durbar Festival celebrating the Eid al-Fitr, which marks the end of the Islamic holy fasting month of Ramadan. (STEFAN HEUNIS/AFP/Getty Images) 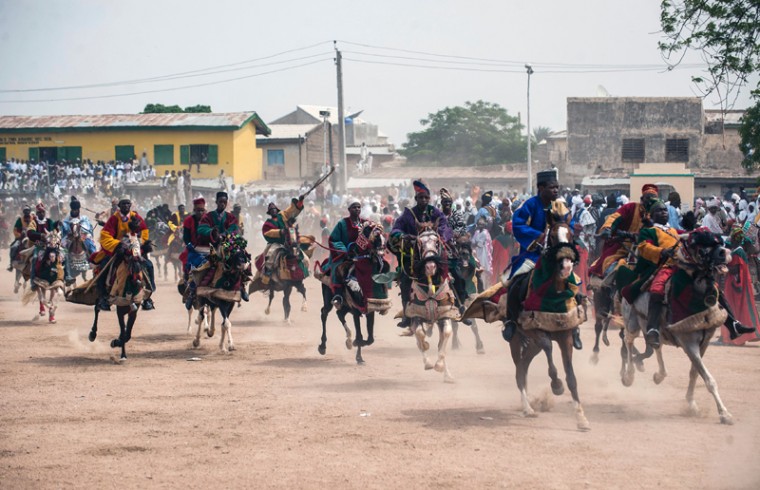 Members of the Durbar procession race the final stretch to the Emir’s palace in Kano, northern Nigeria on Wednesday. (STEFAN HEUNIS/AFP/Getty Images) 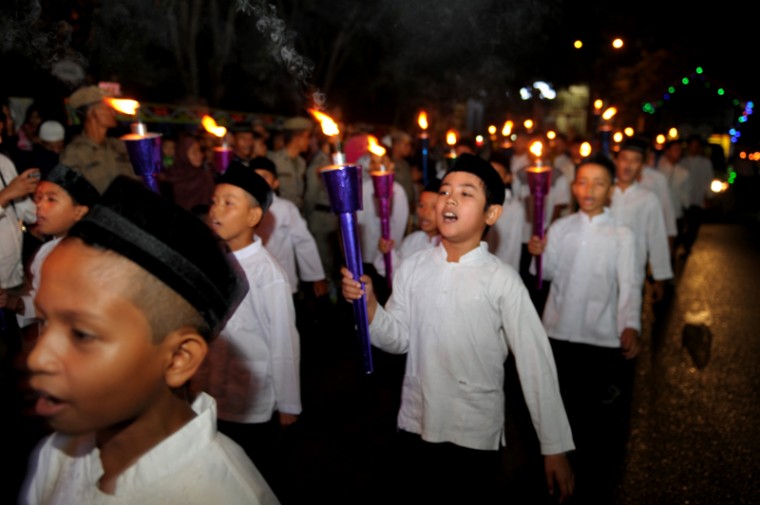 A group of Indonesian children sing Tuesday as they take part in a parade to mark Eid al-Fitr in Aceh. (CHAIDEER MAHYUDDIN/AFP/Getty Images) 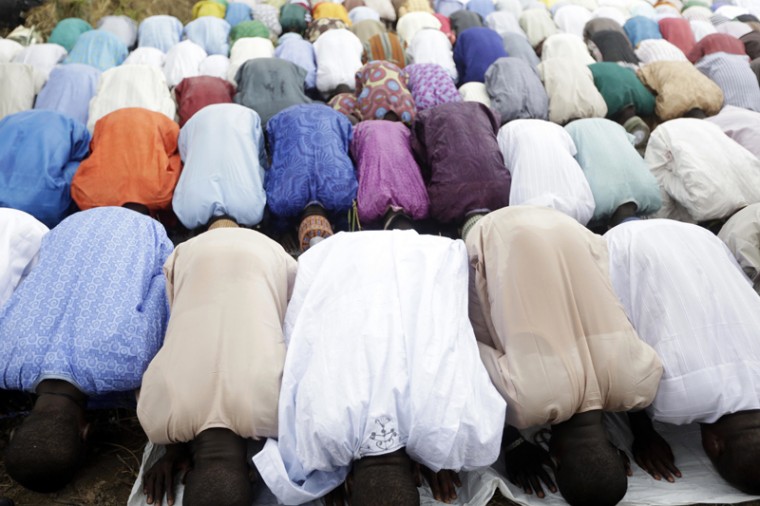 Nigeria Muslims attend the Eid al-Fitr prayers in Lagos, Nigeria, on Wednesday as Muslims around the world celebrate the end of the holy month of Ramadan. (Sunday Alamba/AP) 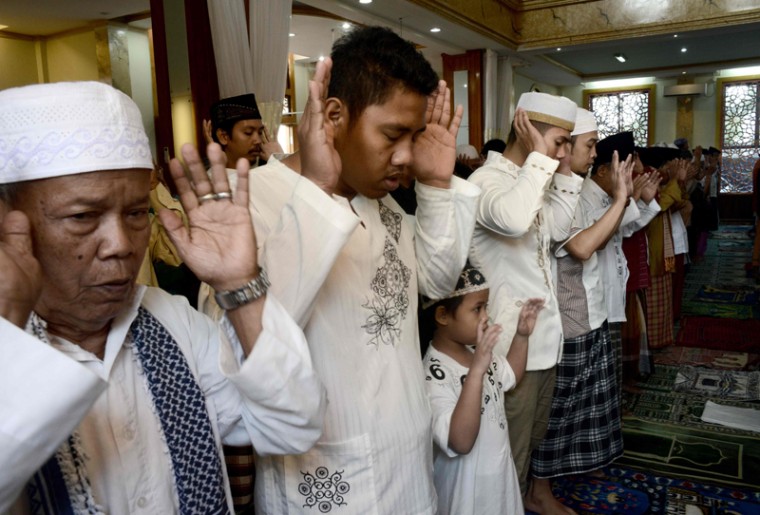 A group of Indonesian Muslim men offer morning prayers during Eid al-Fitr celebrations outside a mosque in Tangerang, in the suburbs of Jakarta, on Wednesday. Indonesian Muslims celebrate Eid with festivities and family reunions in the world’s most populous Muslim-majority country. (GOH CHAI HIN/AFP/Getty Images) 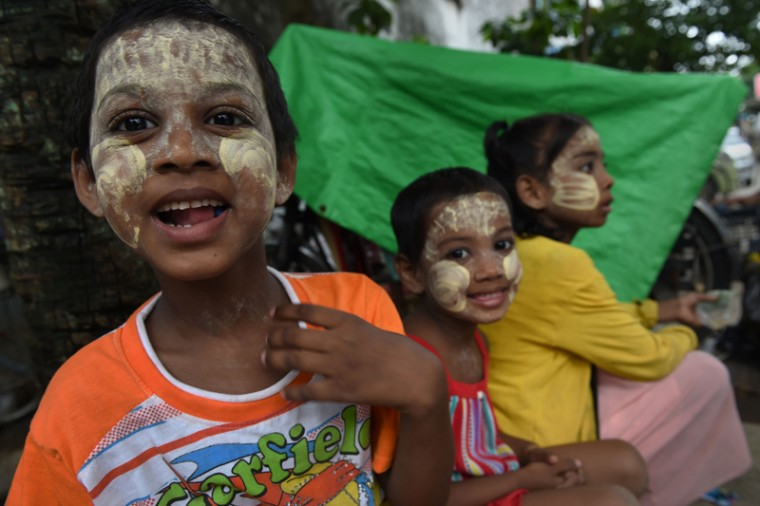 Myanmar children wearing a “thanaka”, a traditional facial cosmetic, wait for alms outside a mosque in Yangon on Wednesday on the eve of Eid al-Fitr celebrations. Myanmar’s Muslim minority will celebrate Eid al-Fitr on Thursday. Myanmar police have detained five villagers for burning down a mosque last week, an officer said, as authorities look to contain religious violence in the Buddhist-majority nation. (ROMEO GACAD/AFP/Getty Images) 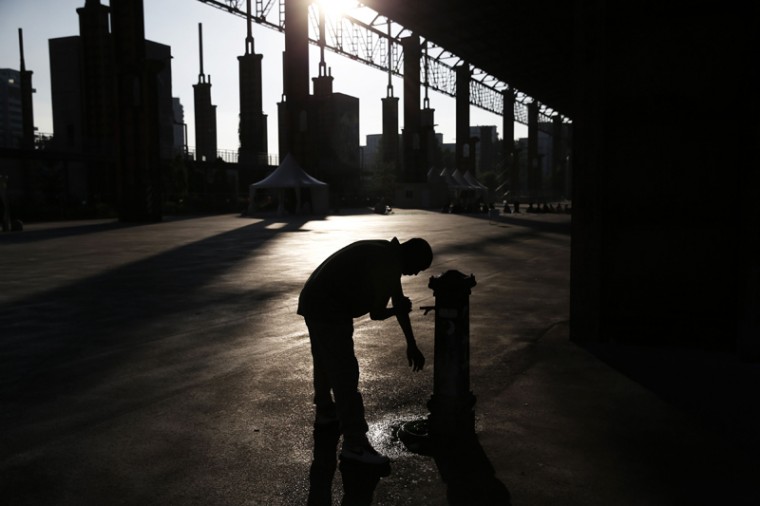 A Muslim worshipper performs his ablutions prior to taking part with others in celebrations of Eid al-Fitr marking the end of the fasting month of Ramadan, on Wednesday in the Parco Dora park in Turin. (MARCO BERTORELLO/AFP/Getty Images) 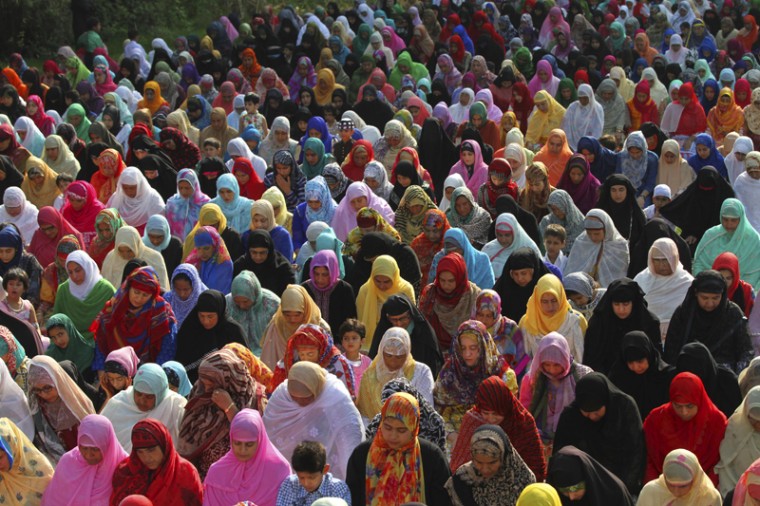 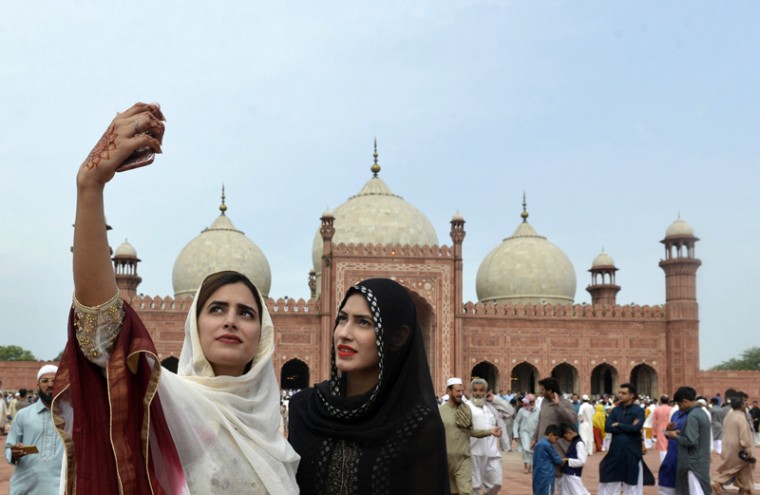 Pakistan muslim women take selfie photographs after offering Eid al-Fitr prayers at the Badshahi Masjid in Lahore on Wednesday. The three-day festival, which begins after the sighting of a new crescent moon, marks the end of the fasting month of Ramadan during which devout Muslims abstain from food and drink from dawn to dusk. (ARIF ALI/AFP/Getty Images) 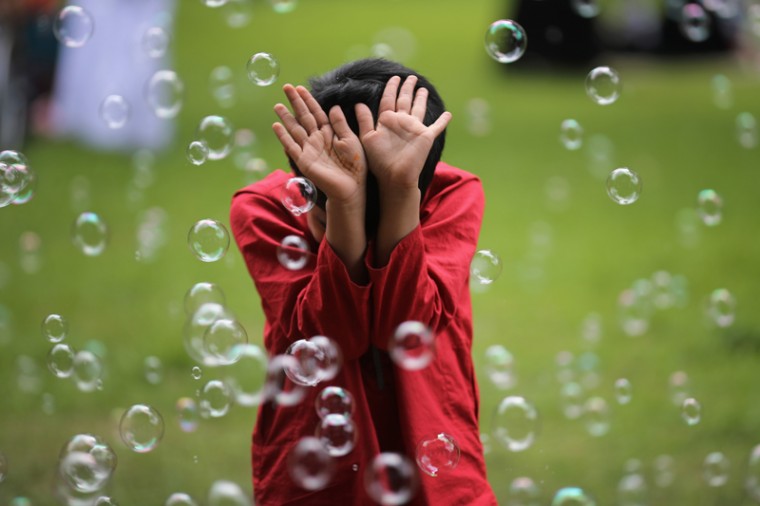 A young boy plays with soap bubbles as the Birmingham Muslim community celebrates the festival of Eid in Small Heath Park on Wednesday in Birmingham, England. Up to 70,000 people congregated in Small Heath Park to celebrate the Muslim holiday of Eid, which marks the end of 30 days of dawn-to-sunset fasting during the holy month of Ramadan. (Christopher Furlong/Getty Images)

« From the Vault: “This is Baltimore” by Robert Kniesche » 24 hours with: The vintage-loving hobbyist