From the Vault: Revisiting the iconic Iwo Jima photograph

This week, all eyes were back on Iwo Jima as the AP reported that James Bradley, author of “Flags of Our Fathers,” and the son of one of the men reported to be in the photo, publicly said that his father might not be in the iconic picture after all. And the U.S. Marines released a statement to the Associated Press saying they are looking into the true identities of the men pictured in Rosenthal’s shot.

Amidst this bout of historical amnesia, The Sun’s researcher, Paul McCardle, decided to look back in our own archives to examine photos of the first and second flag raisings at Iwo Jima, as well as shots of the ensuing scupltures it inspired. 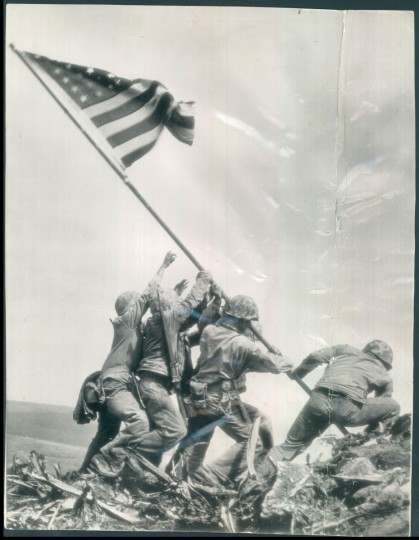 The iconic AP shot by Joe Rosenthal. A caption reads, “IWO JIMA…. THE SPIRIT OF ’45: In a scene more like the work of a sculptor than an actual news photograph, Marines of the 28th regiment, fifth division, hoist the American flag…” 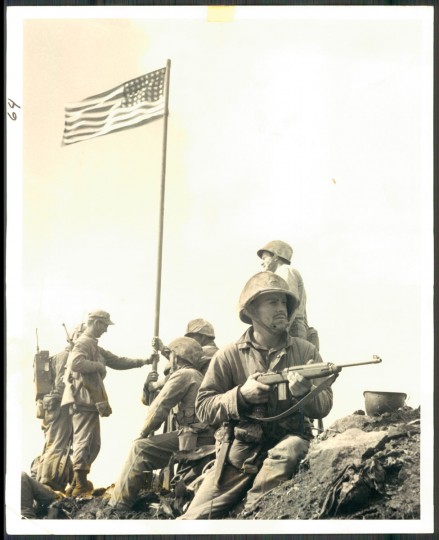 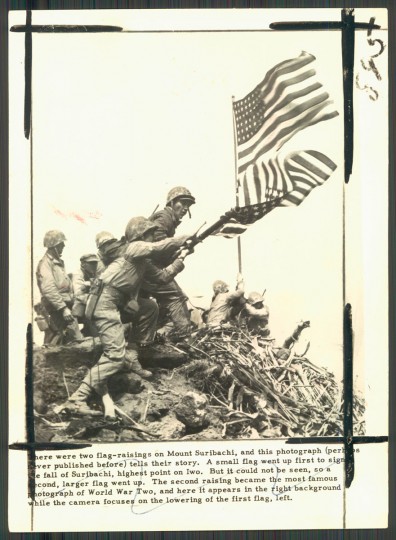 “There were two flag raisings at Iwo Jima’s Mount Suribachi, and this photograph from ‘Strong Men Armed,’ tells their story. A small flag went up to signal Suribachi’s fall. It could not be seen from the base of the mountains, so a larger flag was raised. The second raising was the one shown in the photograph that became famous. In this picture the first flag is about to be furled as the second one flies.” 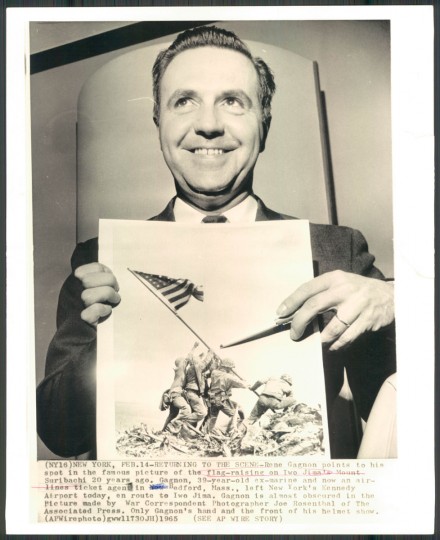 Rene Gagnon points to his spot in the famous picture of the flag-raising on Iwo Jima’s Mount Suribachi 20 years ago. Gagnon, 39-year-old ex-marine and now an airlines ticket agent in Bedford, Mass., left New York’s Kennedy Airport today, en route to Iwo Jima. Gagnon is almost obscured in the picture made by War Correspondent Photographer Joe Rosenthal of the Associated Press. Only Gagnon’s hand and the front of his helmet show. (AP Wire photo dated February 17, 1965). 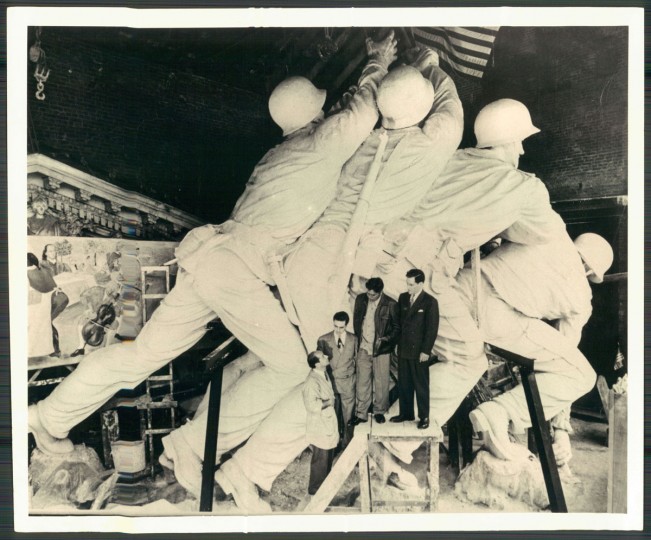 December 10, 1972: Working on the Shrine of Toleration is Felix de Weldon, sculptor of the U.S. Marine Corps War Memorial (Mr. De Weldon and three survivors of the flag-raising stand in front of a plaster model, above). 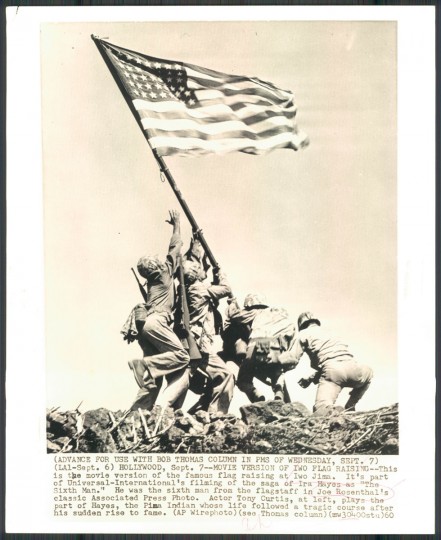 Hollywood, Sept. 7–MOVIE VERSION OF THE FLAG RAISING–This is the movie version of the famous flag raising at Iwo Jima. It’s part of Universal-International’s filming of the saga of Ira Hayes as ‘The Sixth Man.’ He was the sixth man from the flagstaff in Joe Rosenthal’s classic Associated Press Photo. Actor Tony Curtis, at left, plays the part of Hayes, the Pima Indian whose life followed a tragic course after his sudden rise to fame.” (AP Wirephoto dated September 7, 1960). 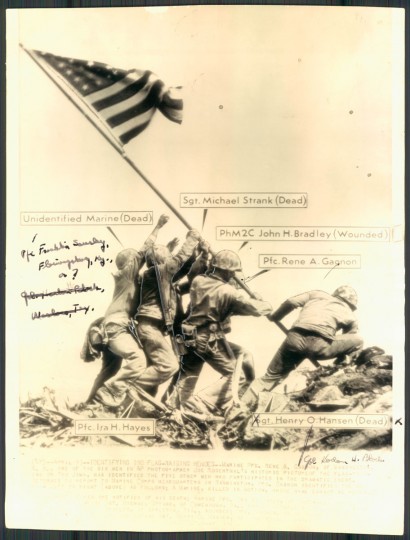 April 10, 1945 illustration showing the presumed identities of the flag-raisers, including John H. Bradley, father of the author James Bradley, who this week said he is unsure whether his father is actually in the iconic photo.

Iconic photos take on a life of their own, acquiring meanings far beyond their original moment. And few photos have been more iconic than AP photographer Joe Rosenthal’s shot of soldiers raising the American flag at Iwo Jima – a photo that has graced the cover of countless school textbooks and even inspired movies and a memorial in Arlington, Virginia. The photo has become a ubiquitous symbol of the bravery of American soldiers, working together, and the triumph of the American Dream.

But what really is happening in that shot? The iconic Iwo Jima shot really captures the second flag raised on the Japanese island that day; earlier, soldiers had raised a slightly smaller American flag. Take a look through our images and see for yourself.