When the call went out one year ago that unrest was breaking out in parts of Baltimore, photographers from The Baltimore Sun swiftly answered, moving themselves into the center of the action. The photographers blended into some of the most intense moments of April 27, 2015, whether between the opposing groups of police and protesters, or near the looters and arsonists. The arrest, following death and resulting funeral for Freddie Gray, sparked something in Baltimore not seen in decades. Here’s a collection of indelible images captured that day by Sun photographers. 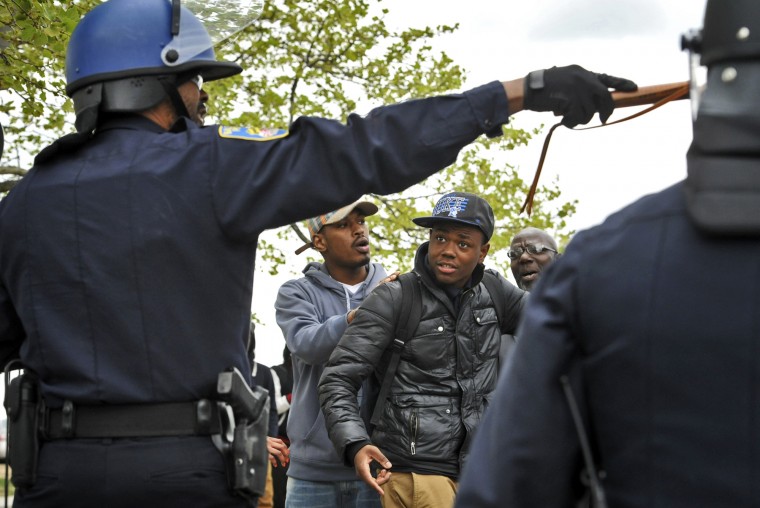 A Baltimore police officer directs people as rioting breaks out near Mondawmin Mall after the April 27, 2015, funeral for Freddie Gray. Gray was arrested at Gilmor Homes on April 12, 2015, and suffered injuries while in police custody that later proved fatal. He died April 19. (Amy Davis/Baltimore Sun) 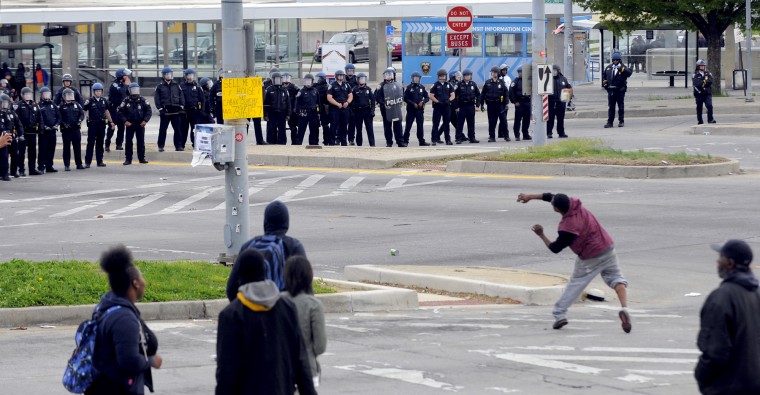 Outside the bus and metro station at Mondawmin Mall, a youth throws a stone at police officers lining the street. (Lloyd Fox/Baltimore Sun) 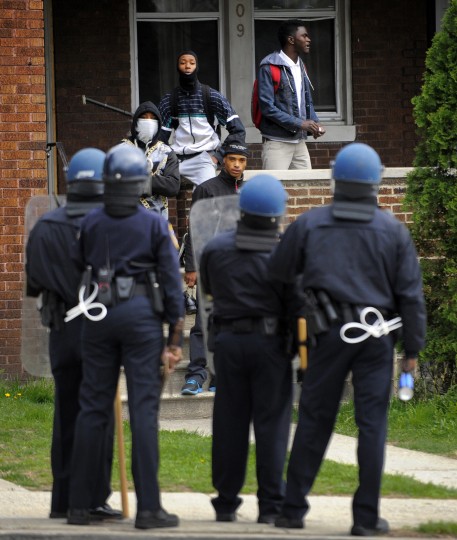 Baltimore police and protesters confront one another at a house near Mondawmin Mall. (Lloyd Fox/Baltimore Sun) 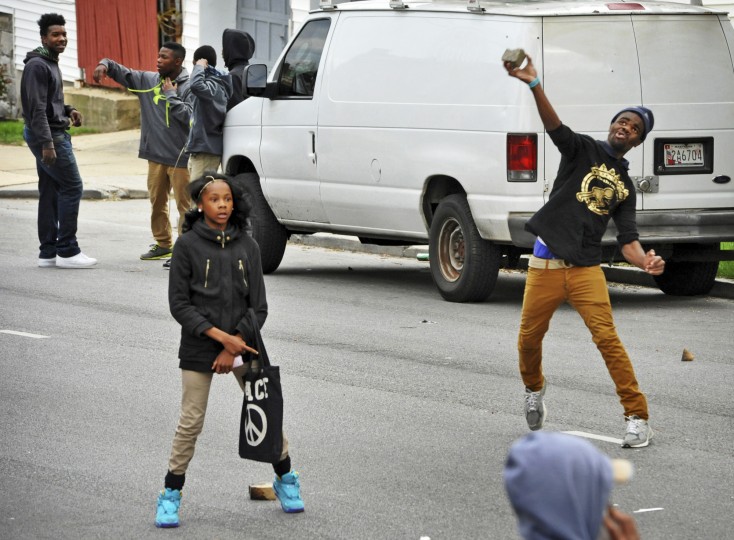 As youths stand nearby, an individual hurls a rock at the line of police on N. Monroe Street near Bryant Avenue. (Amy Davis/Baltimore Sun) 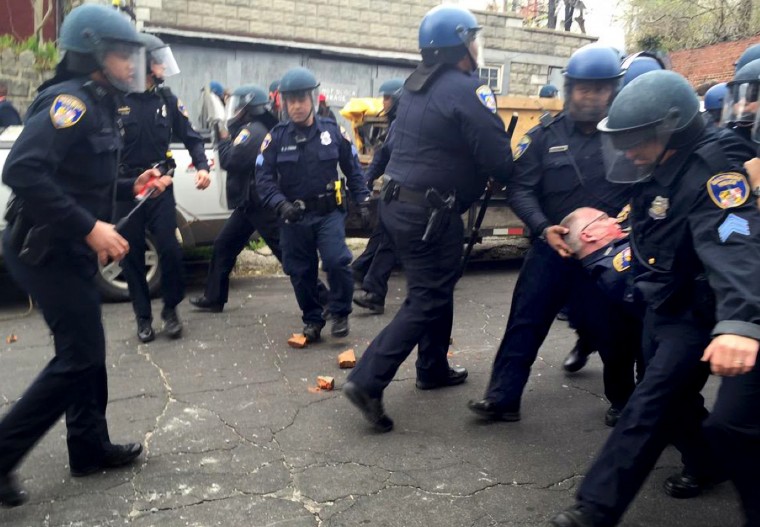 Baltimore City police officers carry off an injured colleague as protests on the day of Freddie Gray’s funeral, April 27, 2015, descend into rioting on the city’s west side. (Erica Green/Baltimore Sun) 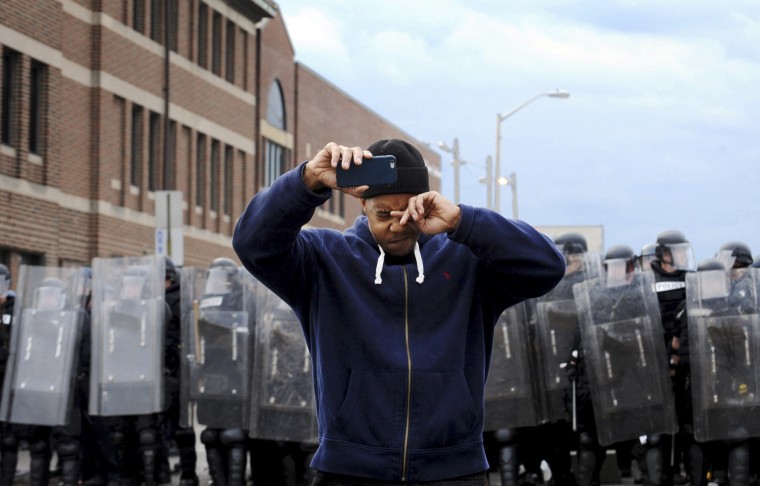 Rashad Riddick, 36, wipes his eyes as he takes pictures of the police line at at North and Pennsylvania avenues, near the CVS Pharmacy that was looted and set afire. Crowds filled the streets in several parts of the city on the day of Freddie Gray’s funeral. Gray died April 19, 2015, from injuries sustained while in police custody. (Algerina Perna/Baltimore Sun) 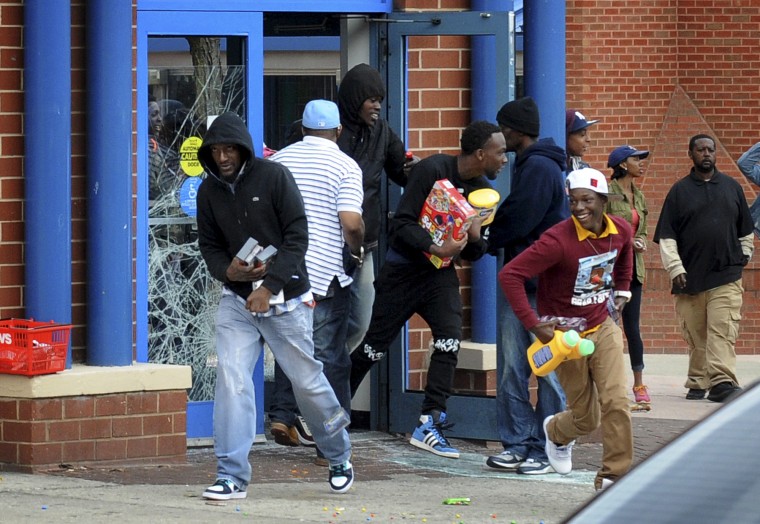 Looters carry a variety of merchandize as they leave the CVS store April 27, 2015, at Pennsylvania and North avenues during the rioting. Stores in other areas were looted and vandalized as well. (Jerry Jackson/Baltimore Sun) 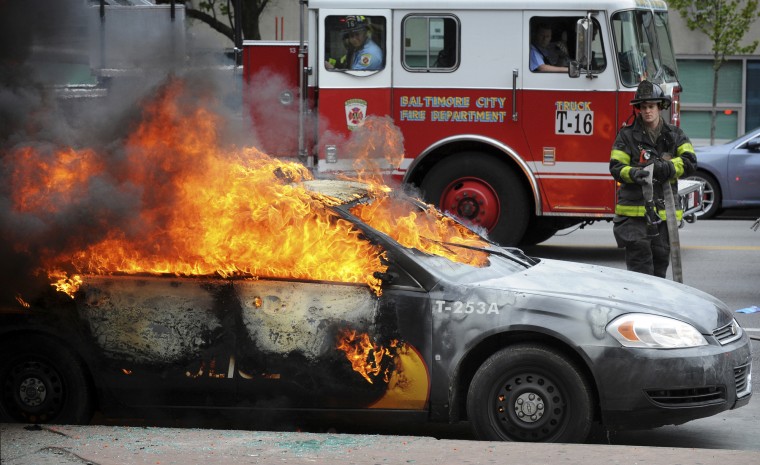 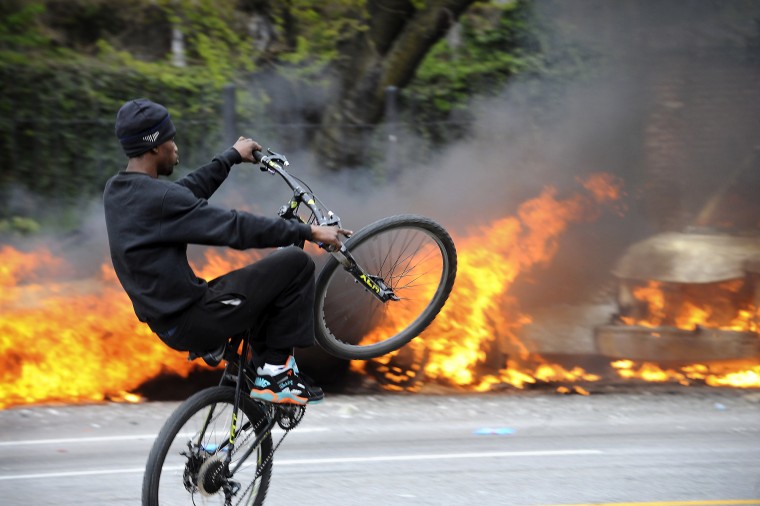 A bicyclist rides in front of two burning police cars as riots break out in the Penn-North area of Baltimore on the day of Freddie Gray’s funeral. Gray died from injuries sustained while in police custody. (Algerina Perna/Baltimore Sun) 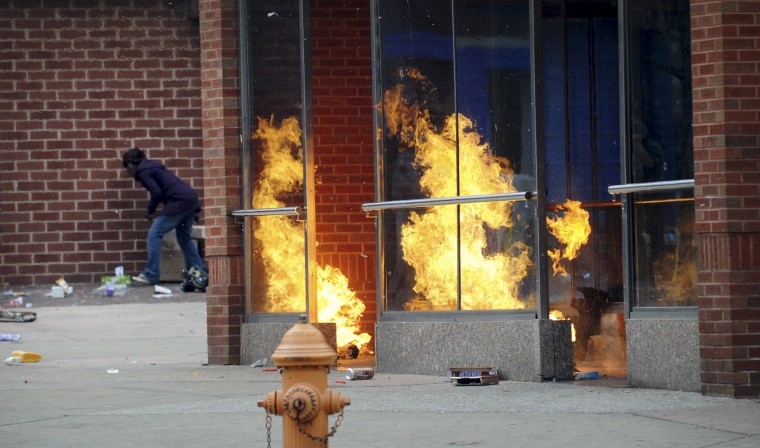 Part of the Penn-North Baltimore Metro Station burns after being set afire April 27, 2015, as unrest roiled through several Baltimore neighborhoods on the day of Freddie Gray’s funeral. Looting and fires spotted the area around North and Pennsylvania avenues, consuming a CVS Pharmacy next to the station. (Algerina Perna/Baltimore Sun) 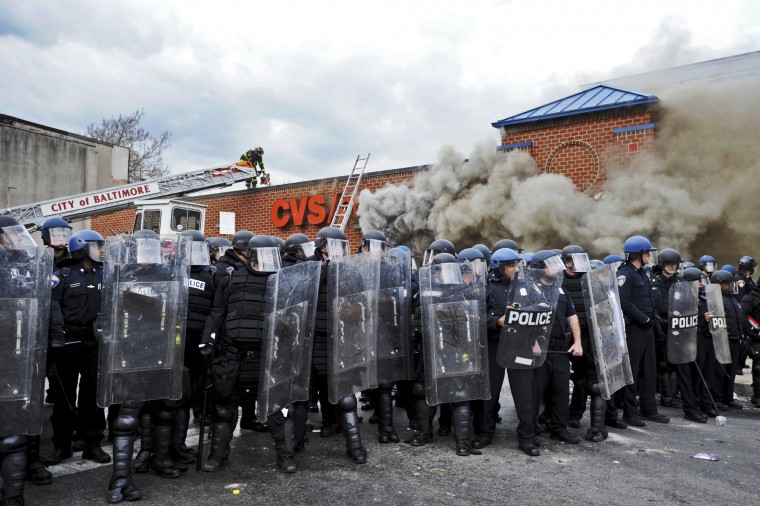 Police form a line near a burning CVS Pharmacy at North and Pennsylvania avenues while firefighter work to extinguish the blaze. The CVS, which opened in the 1990s, was rebuilt. (Algerina Perna/Baltimore Sun) 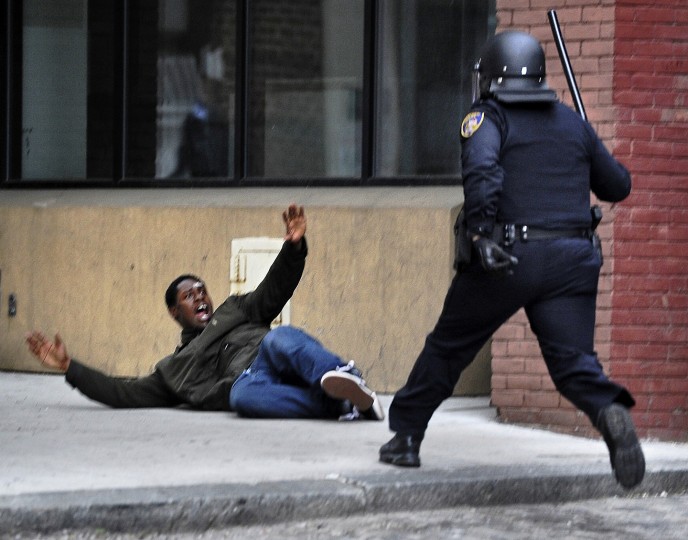 A man screams “Hands up!!” after being chased by a police officer in downtown Baltimore near Lexington Market. The man, who police suspected of looting and property damage, was running from police before he fell and was arrested. The looting and unrest April 27, 2015, followed the burial of Freddie Gray, who died from injuries he sustained while in Baltimore police custody. (Chirstopher T. Assaf / Baltimore Sun) 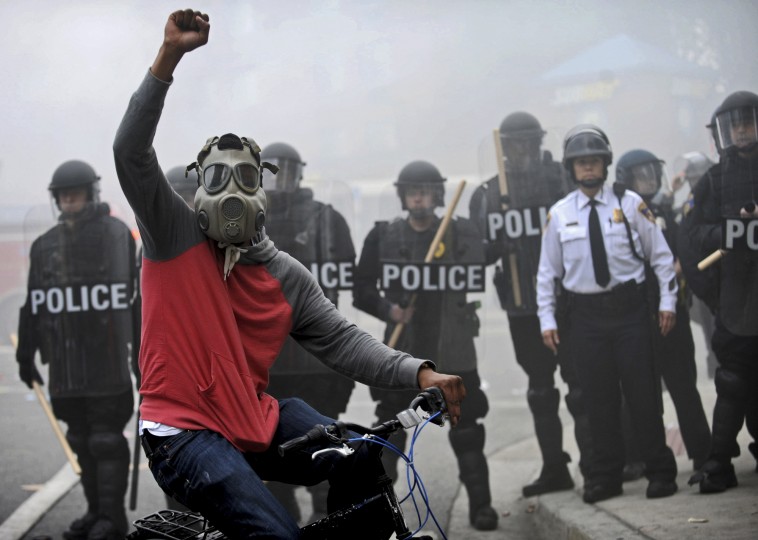 A protester defiantly rides his bike in front of a police line at North and Pennsylvania avenues during the rioting on April 27, 2015. Freddie Gray’s funeral that Monday was soon followed by riots and looting that broke out throughout the city. Gray died April 19, 2015, a week after being arrested in West Baltimore and discovered injured in the back of a Baltimore police van. (Algerina Perna/Baltimore Sun) 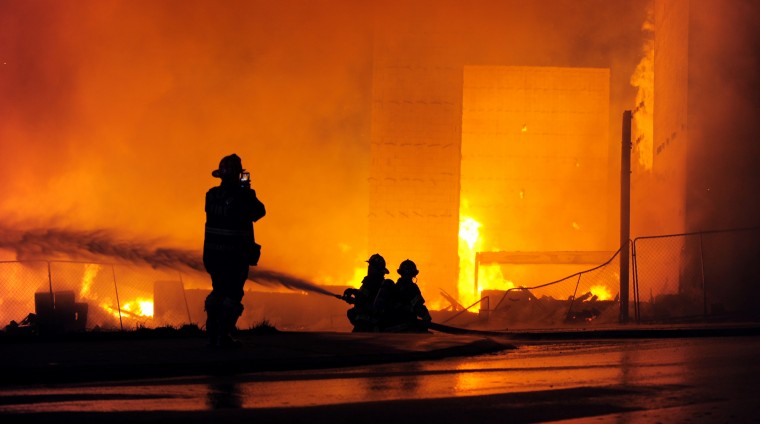 « From the Vault: Election Day in Baltimore » Rio gets Olympic flame 100 days before games