“In a sense it looks way crazier when you look at the pictures,” says Baltimore-based activist and musician Ryan Harvey, who traveled to Lesvos, Greece, on a mission to help refugees there last month. “But when you’re actually there, they’re just people.” For Harvey, who works as a construction worker in Baltimore when he’s not on tour playing music, four weeks spent on the Greek island working with the grassroots NGO CK Team was about making a human connection with refugees and gaining firsthand knowledge of war’s impact. Listen to him talk about his trip in-person at Red Emma’s, Thursday, March 24. 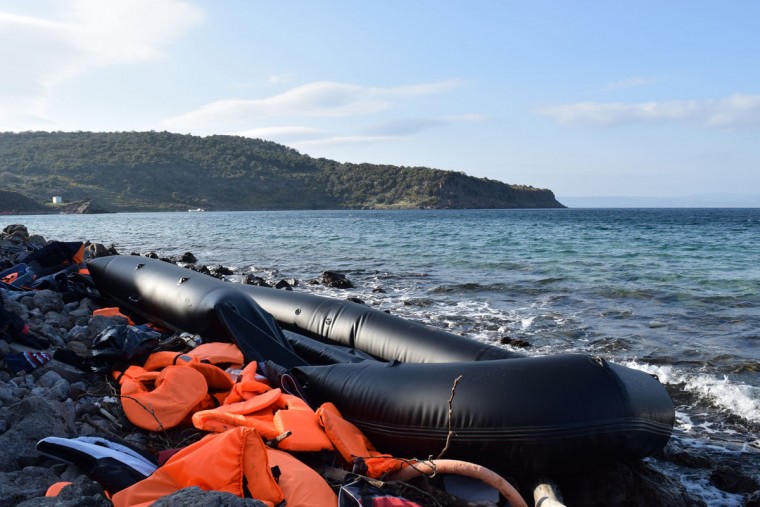 $1,500 can buy a seat on a rubber dinghy like the one above. With anywhere from 45 to 55 refugees on board, the boats frequently sink. “Everyone knows the crossing is dangerous,” Harvey says. But it doesn’t keep them from coming. During the day, Harvey’s team spent much of their time cleaning up debris from the arrivals. “I’m a construction worker by trade,” Harvey says, and his skills came in handy during the cleanup. In some areas there might be a foot or two of deflated boats and life jackets. (Ryan Harvery) 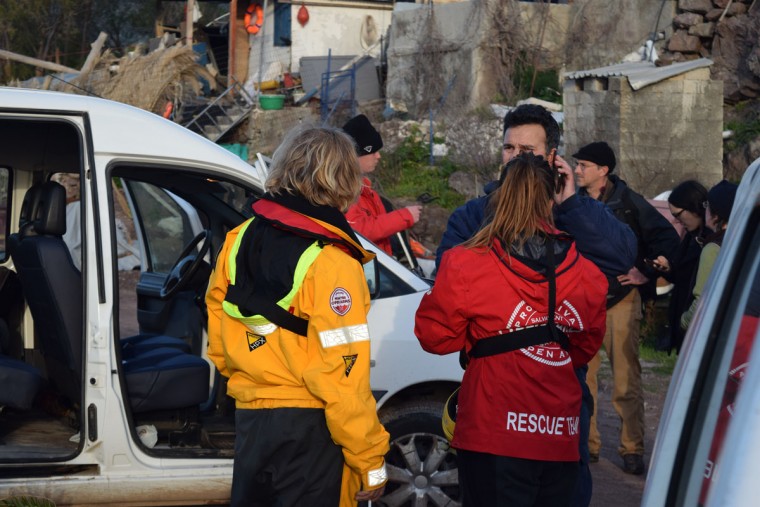 Members of an NGO argue with a particularly irate Greek Coast Guard member. Power struggles have arisen between the Greek government officials and the NGOs; some workers have even been charged with human trafficking after helping boats come to shore. (Ryan Harvey) 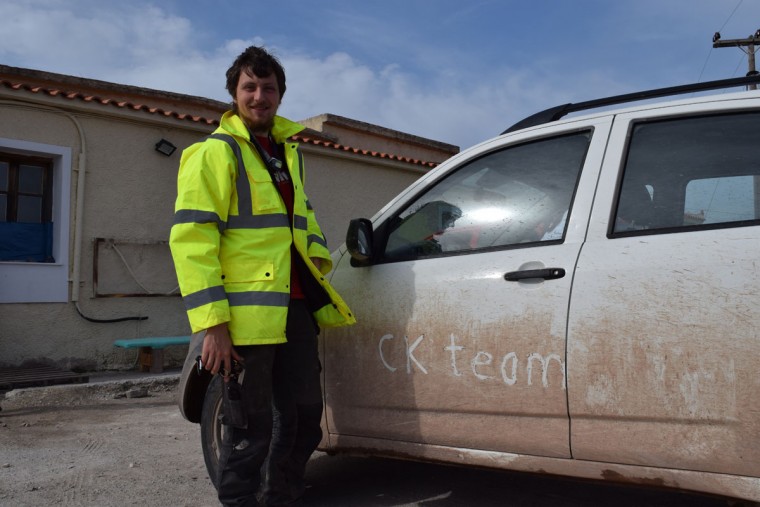 Anton, a member of the CK Team, one of the many grassroots NGOs working to help refugees once they arrive in Lesvos, meeting them with water and emergency blankets, and transporting them to other aid organizations on the island like Doctors Without Borders. Of the Greek islands that refugees travel to on their way to the rest of Europe, Lesvos is the busiest. “All the NGOs that you could poke a stick at are in Lesvos,” Harvey said. “If you’re a refugee and you go into Lesvos you have 50 people greeting you on the beach.” (Ryan Harvey) 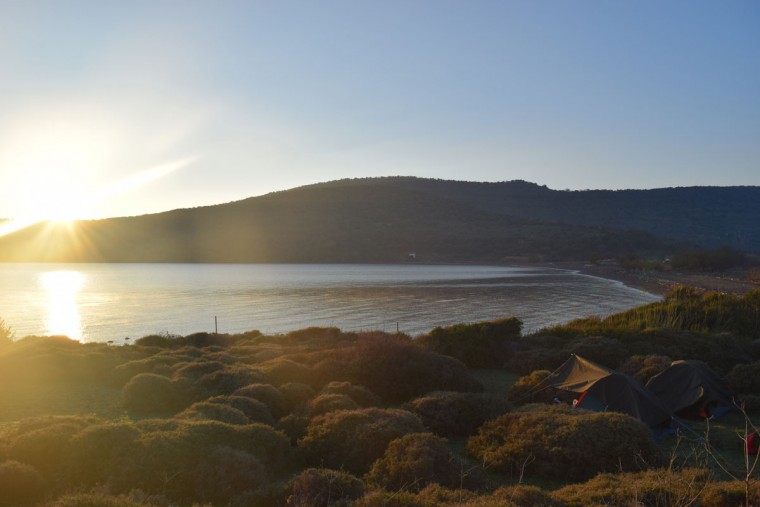 “Most of the boats come in the dark of night,” said Harvey. Some nights it would be 6 boats carrying a total of 300-400 people. “On a calm night sound travels across the ocean magically. If it’s a really moony night you can make out the silhouette of a boat 20 minutes before it hits the beach.” Working from the shore, Harvey said, “You learn the sounds of the different boats.” Speed boats, with their strong motors, could be heard from a half-hour away, while the the smaller motor of the rubber dinghies made a more high-pitched sound, like a remote controlled car. A few times, members of the CK team awoke to find a fire lit by people who’d been dropped off. (Ryan Harvey) 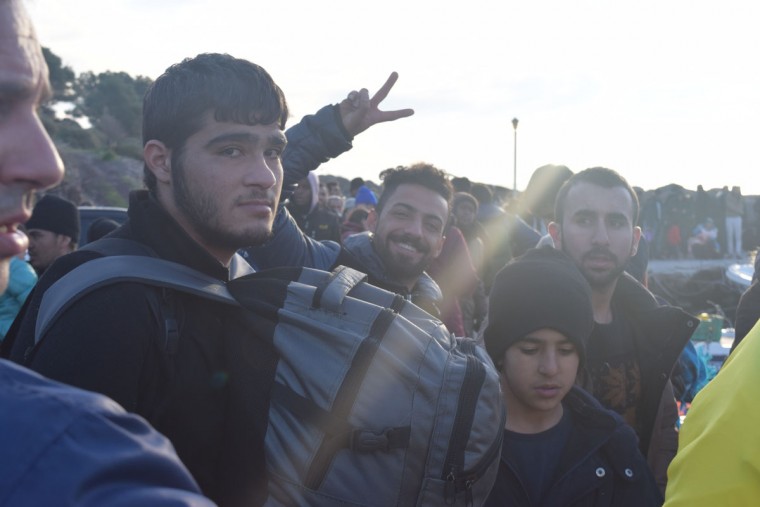 When ships full of refugees came to shore, “I would just start chatting with people,” Harvey said. “I always just made a point to learn their stories, what are they trying to do.” The photo above shows a group of young Kurdish men who arrived to Lesvos via ferry. Some of their fellow passengers had come all the way from Kobane, a city in Kurdish Syria that had been attacked by ISIS. (Ryan Harvey) 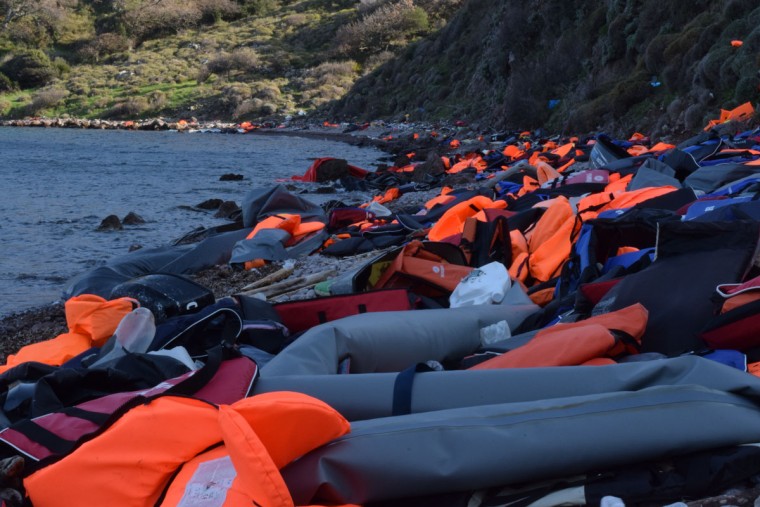 The coast of Lesvos covered in life jackets — many of them counterfeit, says Harvey. “A good life preserver is really thickly packed with foam,” says Harvey. “You’d find ones where the inside was just a couple sheets of this crappy foam.” Harvey says the CK Team has made an effort to inspect the factories in Turkey of life vest manufacturers to make sure they work well. (Ryan Harvey) 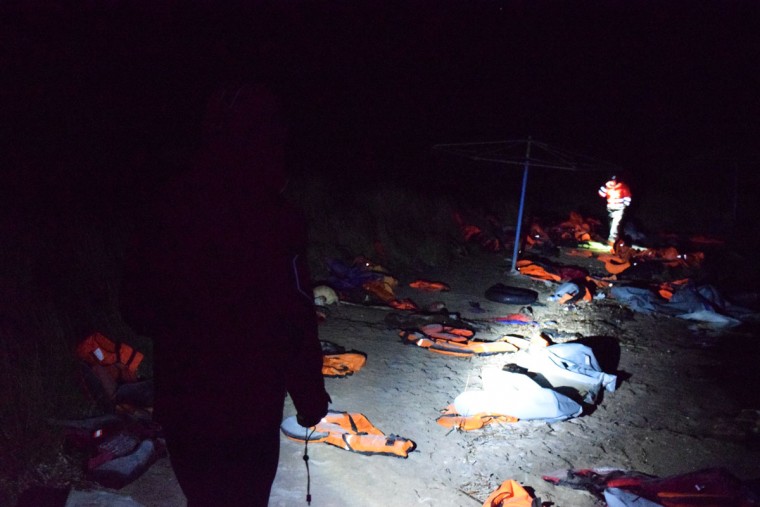 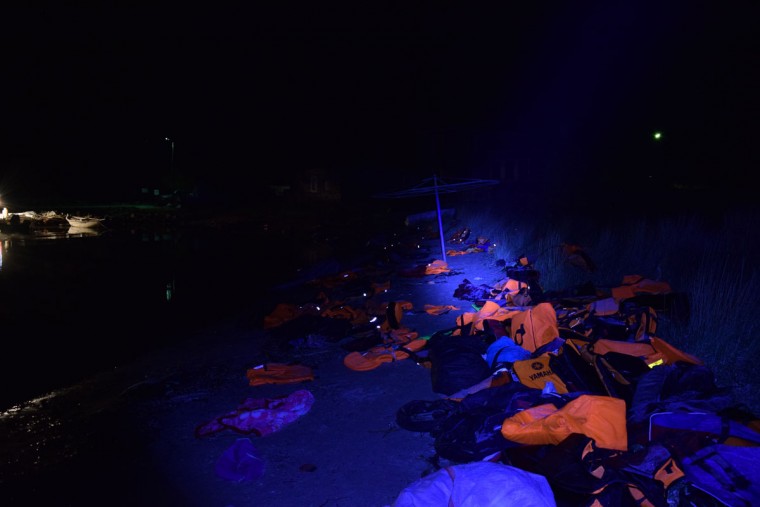 “Life-jackets litter the beach at Palios, an isolated beach in northeast Lesvos. This landing happened on a very cold and wet night, and one of the women who came on the boat likely had to have her toes amputated due to frostbite. The next night, we stayed up all night doing lookouts to be prepared as first-responders to any landings.” (Ryan Harvey) 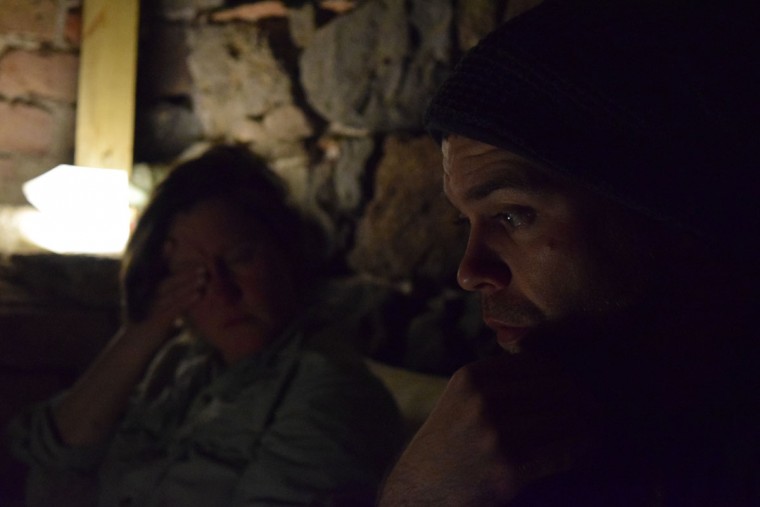 “Members of the CK Team, exhausted from the previous night’s work, pull another nightshift at the Korakas lighthouse, where a 24-hour lookout monitors the ocean and members of our team slept prepared to coordinate transportation. If boats do land at the lighthouse, they are often smashed onto the rocks and people end up in the water. The Lighthouse Relief group would provide assistance on the beach here, and CK would handle transport.” (Ryan Harvey) 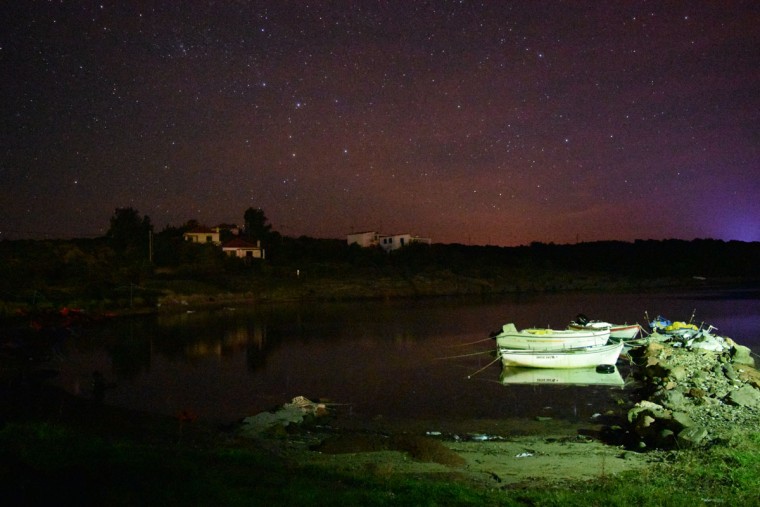 “One of many small inlets where water-rescue teams we worked with would direct refugee boats. Volunteers from the CK Team slept on such beaches in tents to take landings, provide immediate medical care, and coordinate transpiration to temporary shelters.” (Ryan Harvey) 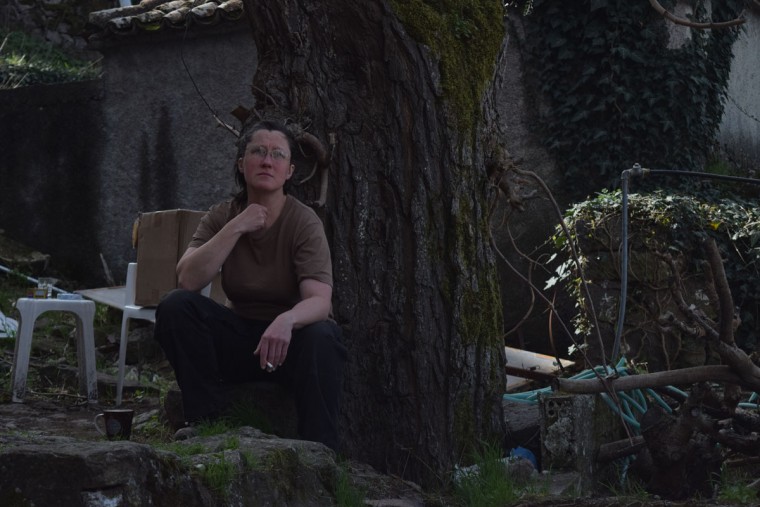 “Heather, a CK Team medic from the U.S., taking a break during our final day in Lesvos. She had been in many night shift medical situations, including one in which her and other members of the team were able to help save the life of a very young child by properly assessing a pre-existing medical condition that had been inflamed on the boat ride to Greece. Our medic team at this time was all Americans who came out of the “action medic” network, a loose coalition of groups dedicated to providing first-aid during protests (treating tear gas, broken bones, etc). They became an important part of the CK Team, and provided trainings for other members in immediate emergency first-aid.” (Ryan Harvey) 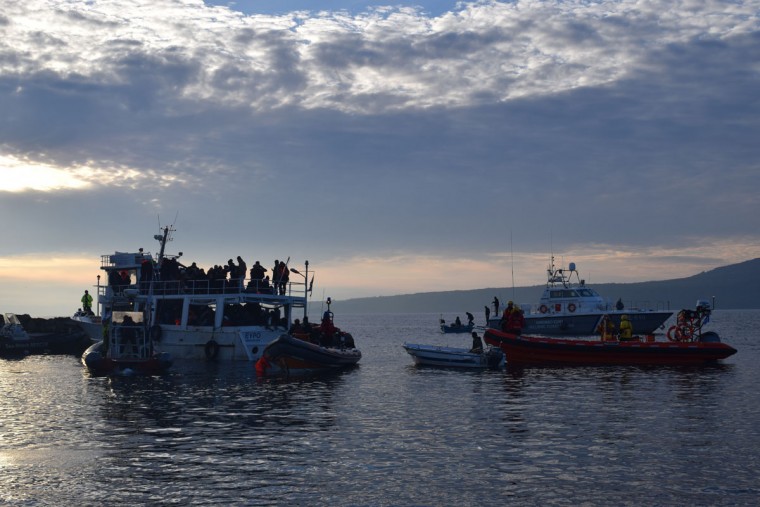 “This small ferry was packed with 180 people from all over the Middle East, South Asia, and Central and Northern Africa. The smuggler had driven them to see but hopped off onto a speedboat before long. The pilotless boat drifted towards Greece and was found by our coalition’s lookout teams, and intercepted by a Proactive (Spanish Lifeguards) reduce boat. The Greek Guard, pictured here on the right, threatened the lifeguards with arrest for tying a line to tow the boat, and they subsequently cut the line. Multiple rescue boats, the Coast Guard, and a Portuguese Frontex boat all sat around looking at each other when a Greek fisherman, not caring for the law, pulled up and towed the boat himself. Proactive told me later that they tied that boat after it came within 20 meters of hitting a very dangerous rock near the lighthouse, which would have meant certain death for many of the passengers. Our team handled 3 other boats this night, with the ferry sailing into port at sunrise.” (Ryan Harvey) 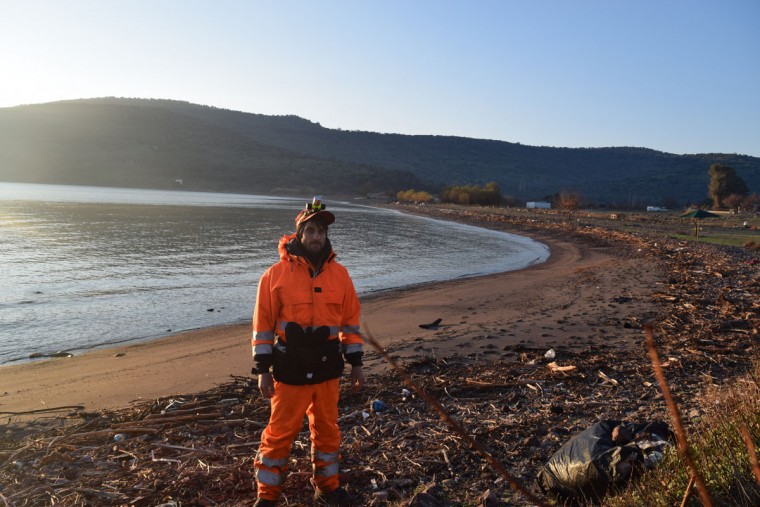 “Me during sunrise at Langada Beach. The previous night saw two landings, separated by about an hour of sleep. The first came around 2:00 AM, the next nearly at 5:00 AM. In between, we waiting on the beach for busses and cars to come from our nearby team houses and the MSF (Doctors Without Borders ) camp. Sleep was rare in Lesvos. This photo was taken after we finished with the second group, and we’re preparing to head to assist with a third landing nearby.” (Ryan Harvey) 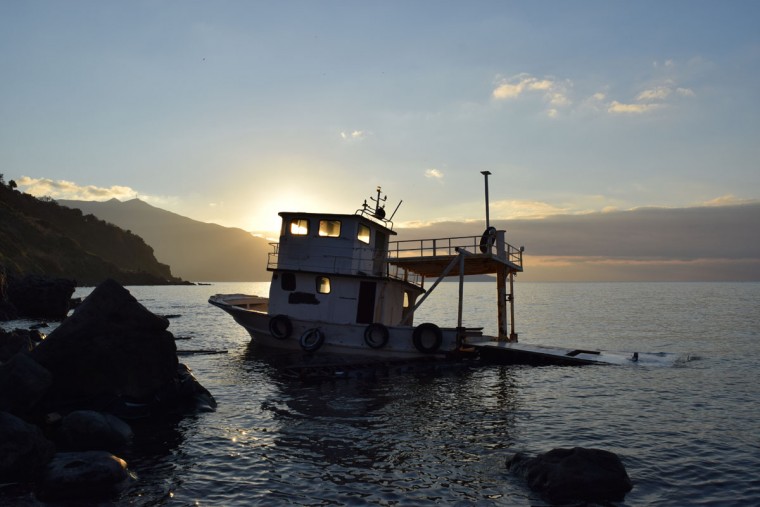 “A fishing boat that brought 135 people sits on the rocks at the Korakas Lighthouse, at the very northeast corner of the island, slowly being torn apart by local metal-scavengers and waves. Such boats come toward the light, not knowing they will slam into the rocks. Our goal at night was to find such boats before they made landfall, and communicate with water-rescue teams to guide them to safer harbors.” (Ryan Harvey) 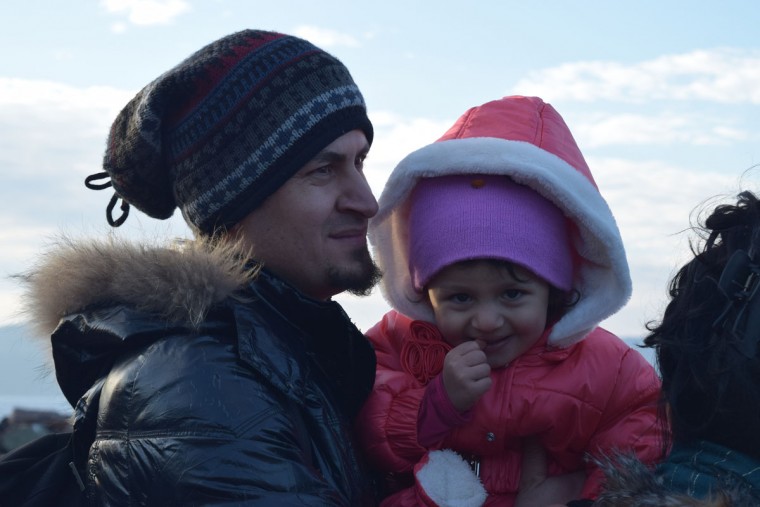 Refugees usually cheered when they’d made it to shore, exuberant to know they’d survived the dangerous and uncomfortable journey. One particularly slow-moving ferry, Harvey said, was so overcrowded with people in the hull “It was like a clown car. I have no idea how that many people fit in there. Even they were laughing about it.” (Ryan Harvey) 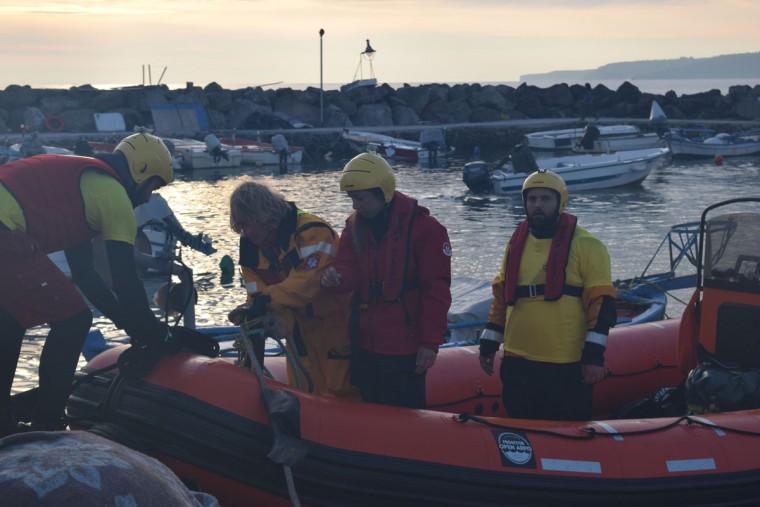 “Members of Proactiva dock during the refugee ferry landing. These amazing people work all night and day in the water, guiding boats to shore and, in the worst cases, doing water rescue during mass-casualty situations. 4 of their members, and a fellow water-rescue volunteer from the Norwegian group Team Humanity, are facing charges for human trafficking for towing a boat a few months ago. The Greek government is accusing them of intervening in a non-emergency situation. The morning of this photo, they did the same again after fears the the ferry would capsize.” (Ryan Harvey) 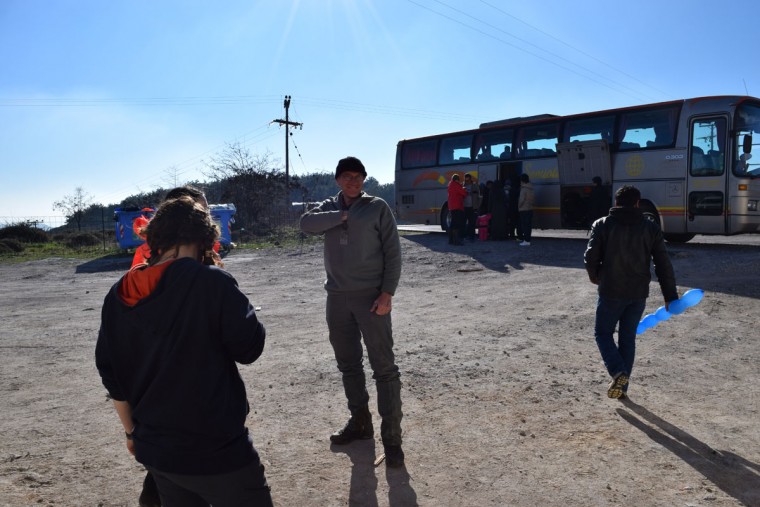 “Roger, a CK Team medic from the U.S., during the final transport effort after a particularly busy night of landings. This is in the parking lot of the abandoned cheese factory that locals and volunteers had turned into a sort of “stage 1” reception area with tea, dry clothes, a medical area, and blankets. From here, the bus pictured took people to the Doctors Without Borders camp, a “stage 2” area which had better medical facilities and food as well as sleeping areas. We took hundreds of people on this night, and by the time this picture was taken, all of us had been awake for 24-hours.” (Ryan Harvey)