On Dec. 1, 1955, Rosa Parks was arrested for refusing to give up her seat to a white man, sparking a 381-day boycott that led to desegregation of Montgomery, Alabama, buses. 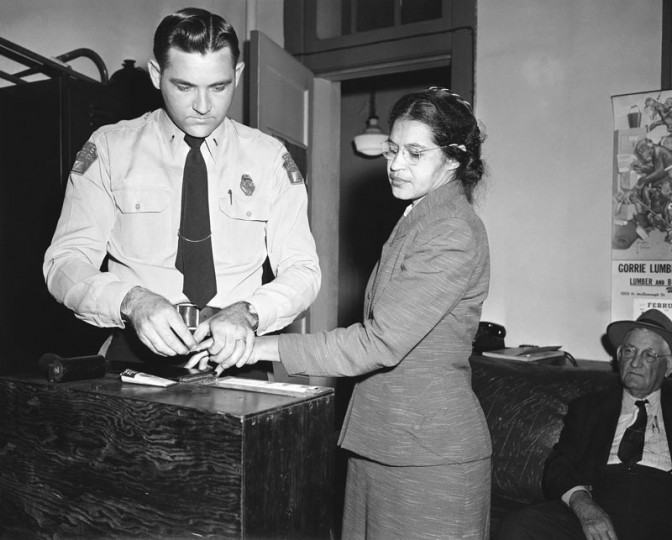 In this Feb. 22, 1956, file photo, Rosa Parks, whose refusal to move to the back of a bus touched off the Montgomery bus boycott, is fingerprinted by police Lt. D.H. Lackey in Montgomery, Ala. She was among some 100 people charged with violating segregation laws. (Gene Herrick/AP) 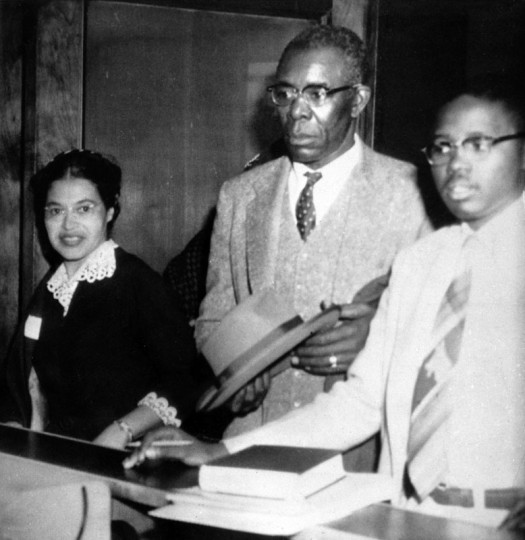 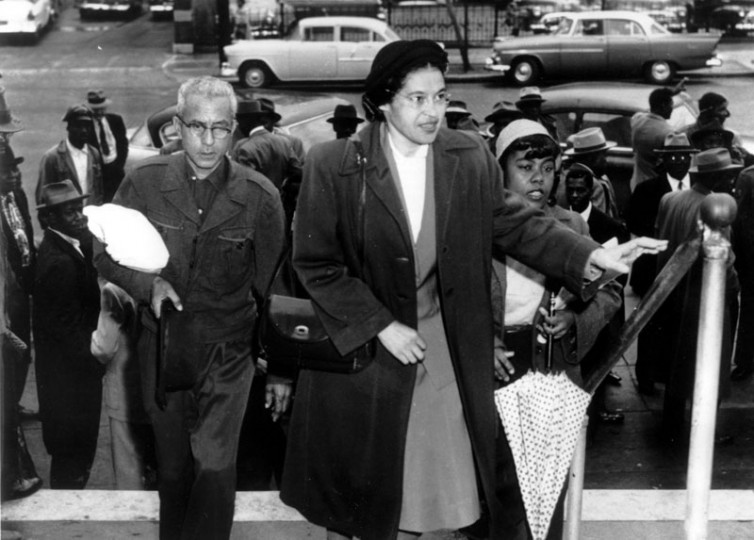 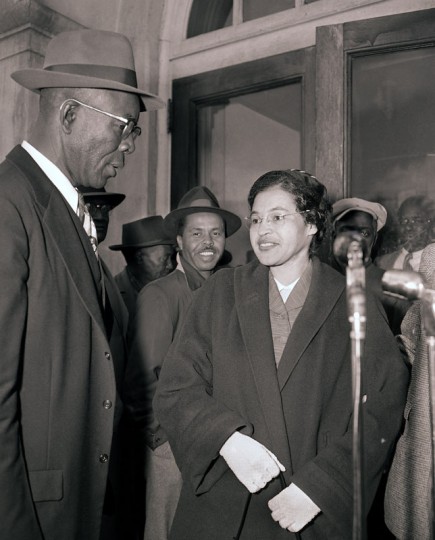 Rosa Parks and E.D. Nixon, former president of the Alabama NAACP, arrive at court in Montgomery on March 19, 1956. Parks was fined $14 on Dec. 5, 1955, for failing to move to the back of a city bus. The boycott started on the day she was fined. There were 91 other defendants. (Gene Herrick/AP) 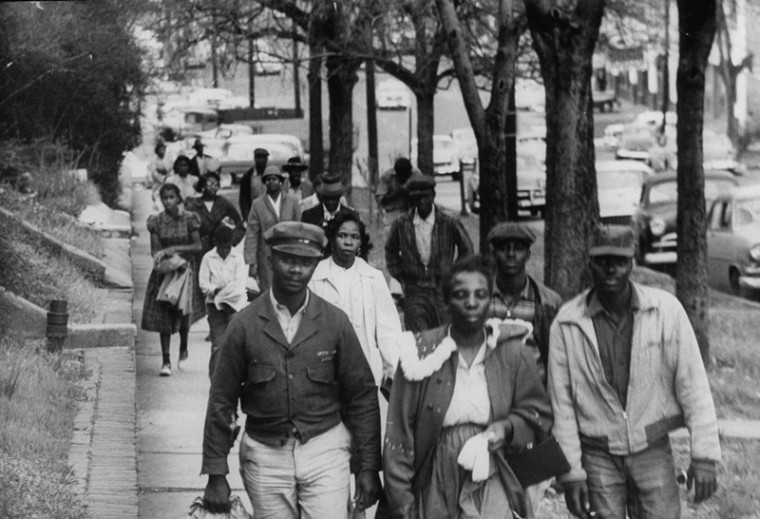 African Americans walk to work instead of riding the bus during the third month of an eventual 381-day bus boycott, in Montgomery, Alabama, February 1956. This photo was part of the 381 Days: The Montgomery Bus Boycott Story exhibit at the Reginald F. Lewis Museum. (Don Cravens/Time Life Pictures/Getty Images) 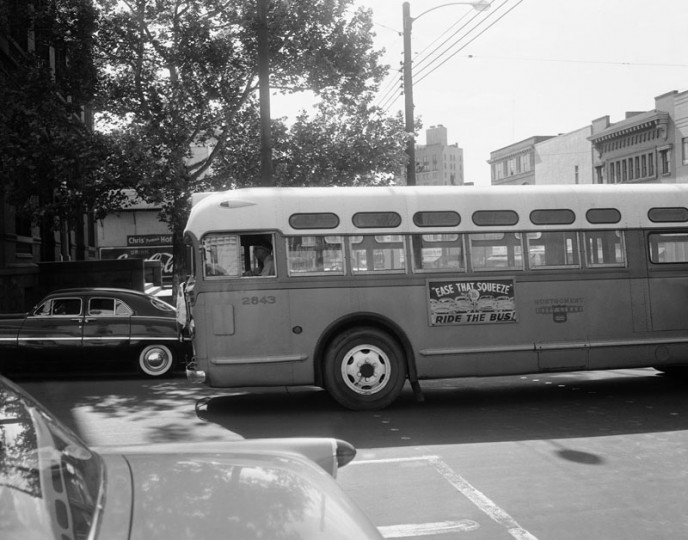 In this April 26, 1956, file photo, a bus driver is all alone as his empty bus moves through downtown Montgomery, Ala, as a boycott continues even though the bus company has ordered an end to segregation. (Horace Cort/AP file photo) 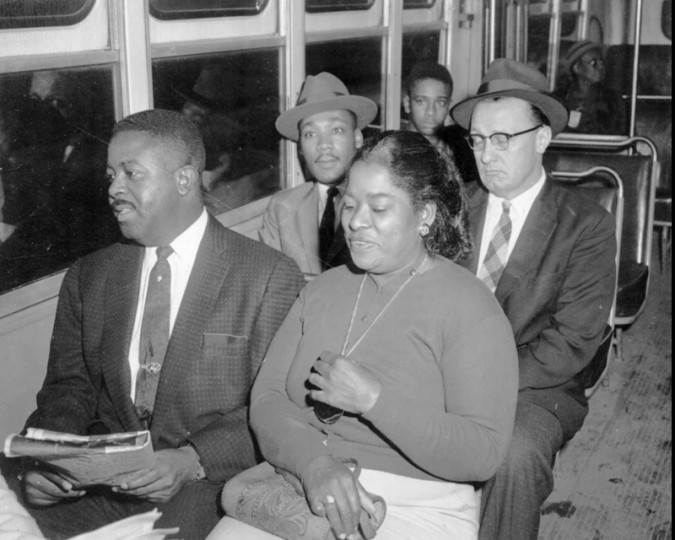 Glenn E. Smiley, right rear, a civil rights activist who advised Martin Luther King, seated next to Smiley, on the techniques of nonviolence. Seated at left foreground is Rev. Ralph Abernathy in this Dec.21, 1963 file photo in which the three men were among the first to ride a bus in Montgomery after the Supreme Court’s desegregation order. (AP file photo) 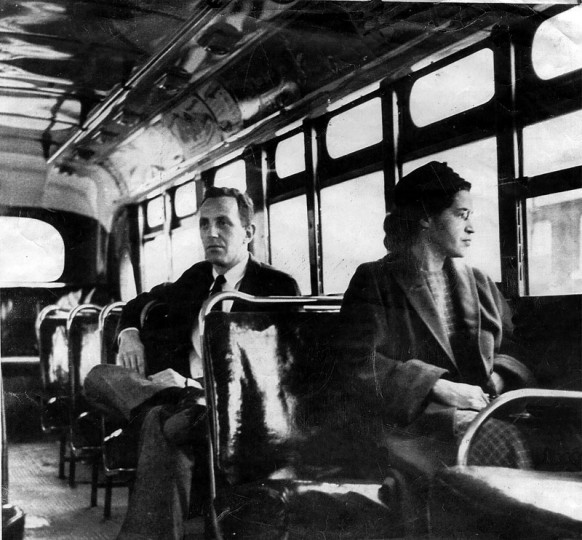 This undated file photo shows Rosa Parks riding on the Montgomery Area Transit System bus in Montgomery, Ala. Parks refused to give up her seat on a Montgomery bus Dec. 1, 1955, and ignited the boycott that led to a federal court ruling against segregation in public transportation. (AP/Daily Advertiser) 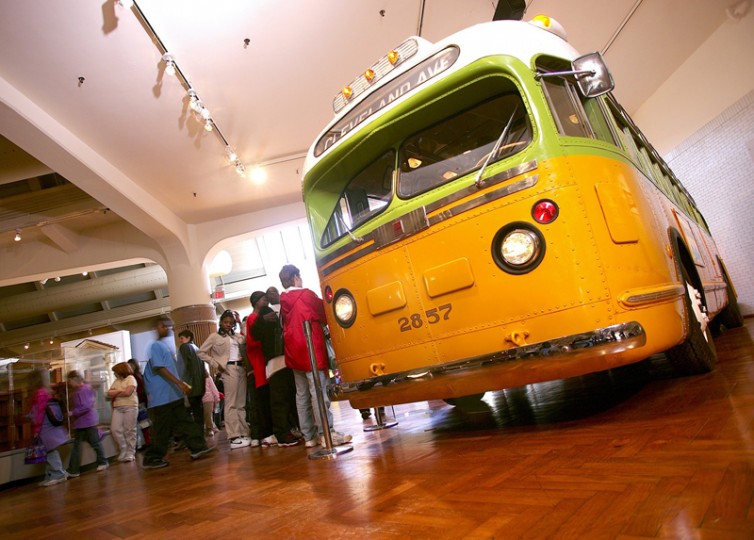 The Henry Ford – Rosa Parks bus. The bus, purchased by a museum in October 2001, arrived from Montgomery, Alabama after spending 30 years in a field. Exposed to the elements, the bus underwent nearly five months of restoration. 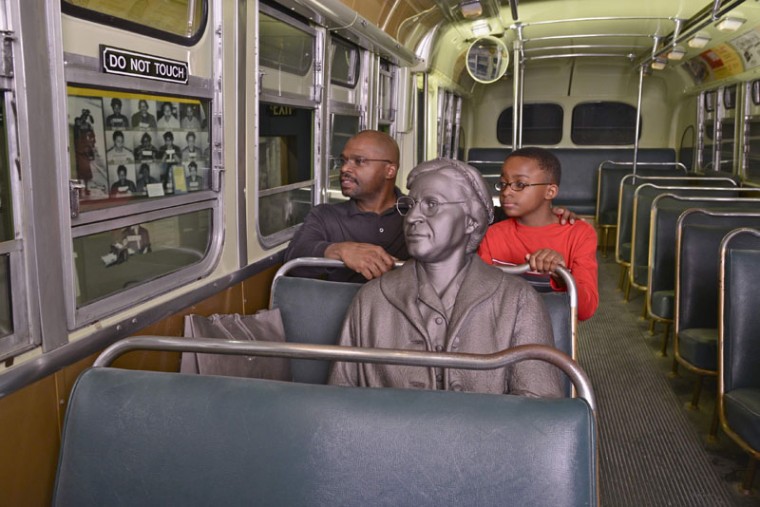 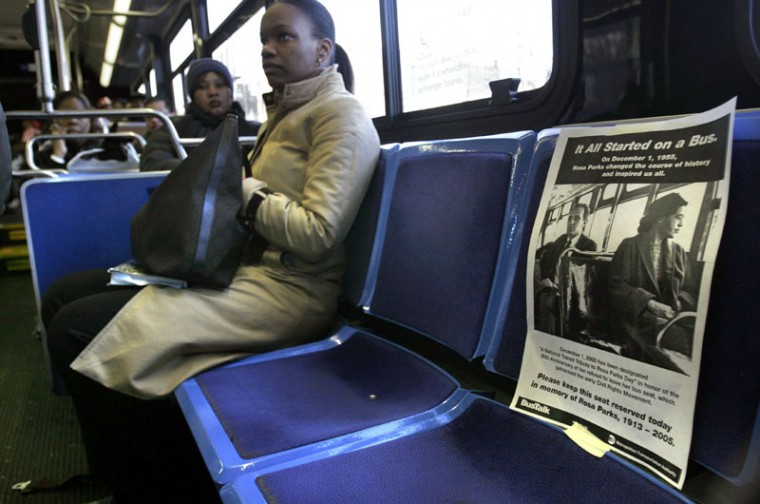 A poster entitled “It All Started On A Bus,” is posted on the front seat of a New York City bus to honor Rosa Parks in New York, Dec. 1, 2005, the 50th anniversary of the act of civil disobedience by Rosa Parks. (Bebeto Matthews/AP) 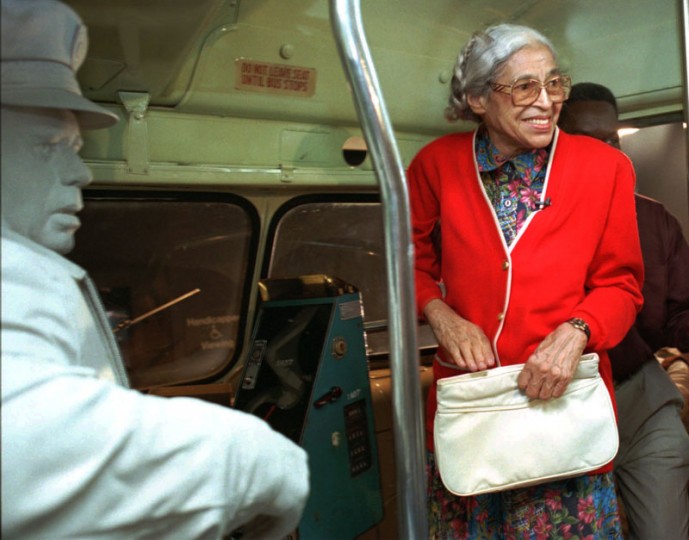 Rosa Parks visits an exhibit illustrating her bus ride of December 1955 at the National Civil Rights Museum in Memphis, Tenn., on July 15, 1995. Parks visited around the city to inaugurate her three-week “Freedom Ride” throughout the country. (Troy Glasgow/AP) 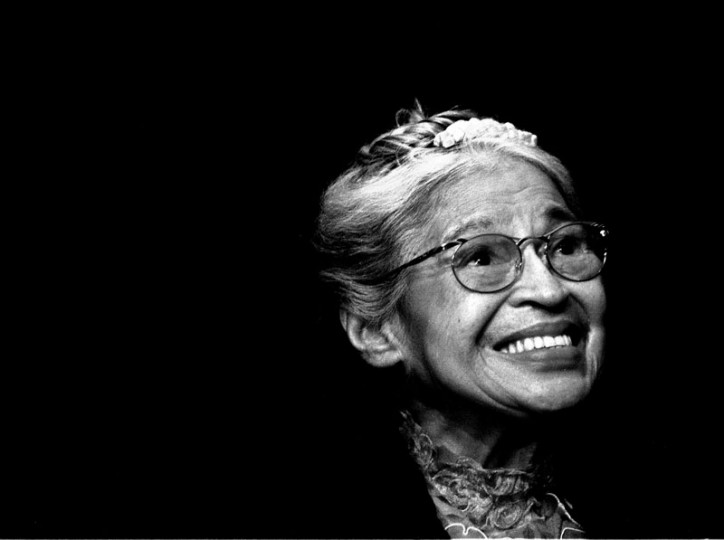 In this Nov. 28, 1999, file photo, Rosa Parks smiles during a ceremony where she received the Congressional Medal of Freedom in Detroit. (Paul Sancya/AP file photo) 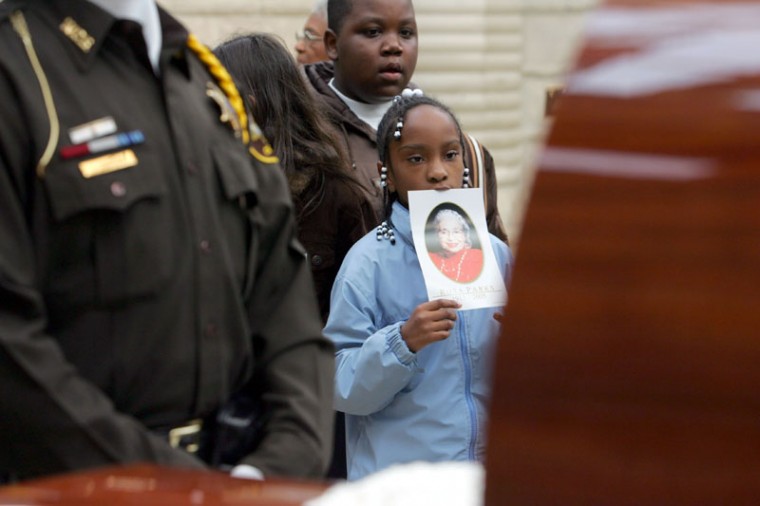 Visitors pay their last respects to Rosa Parks as they file by her casket at the Charles H. Wright Museum of African American History October 31, 2005, in Detroit. (Hugh Grannum-Pool/Getty Images) 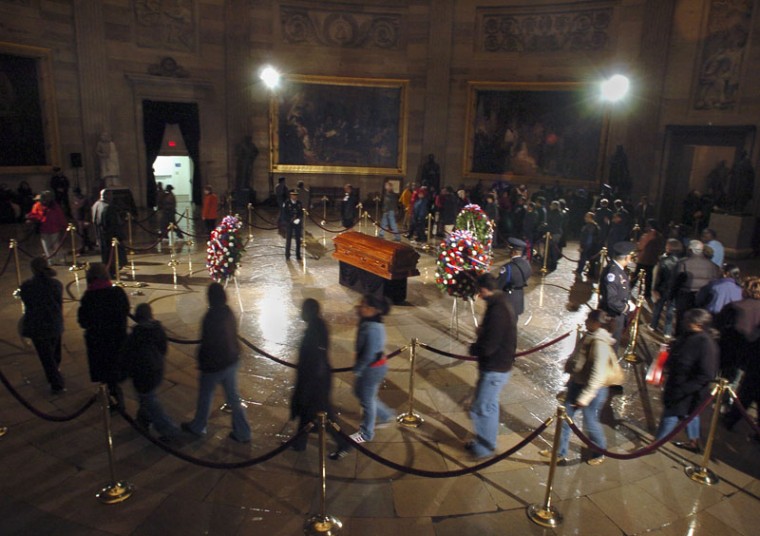 Members of the public pay their respects to Rosa Parks at the Capitol Rotunda on Oct. 30, 2005. (KENNETH K. LAM/BALTIMORE SUN) 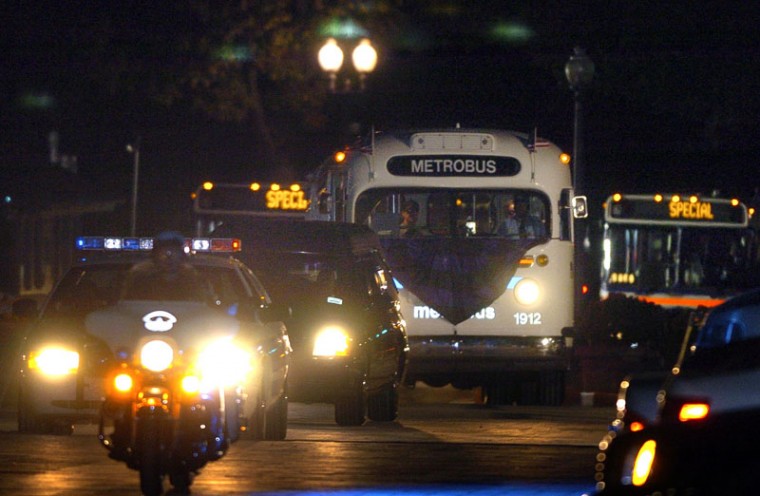 The hearse containing Rosa Parks’ casket arrives at the Capitol followed by a 1957 bus and two other Metro buses carrying family members and dignitaries. Parks was the first woman to lie in honor at the Capitol. (KENNETH K. LAM/BALTIMORE SUN) 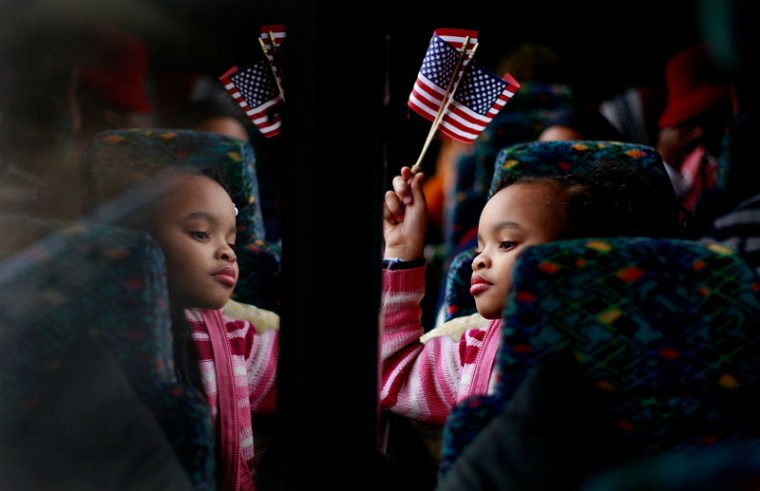 Torri Tippett, 8, from Birmingham, Alabama, rides on a bus with Alabamans on the way to Washington, D.C., to attend the inauguration of President-elect Barack Obama Jan. 19, 2009. (Mario Tama/Getty Images) 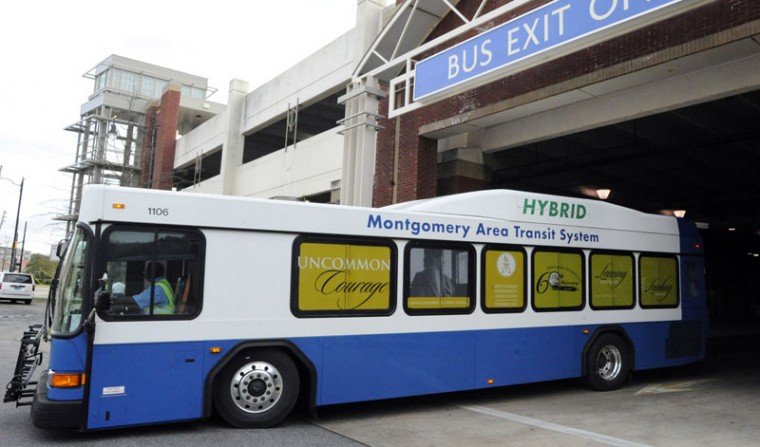 This photo taken Nov. 17, 2015, shows a bus decorated to honor Rosa Parks leaving the main station in Montgomery, Ala., near the 60th anniversary of a bus boycott widely credited with helping spark the modern civil rights movement. Six decades after Parks was arrested for refusing to give up her bus seat to a white man, the city’s buses have a mostly black ridership and are the target of frequent complaints about poor service. (Jay Reeves/AP)