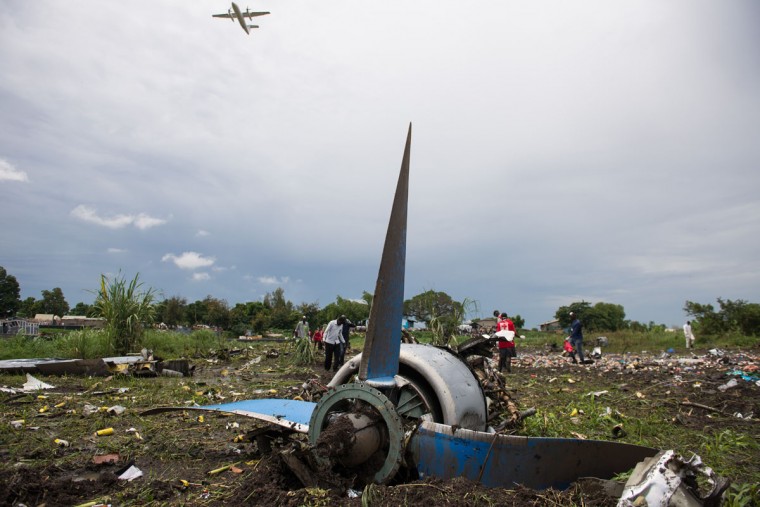 People gather at the site of a cargo plane crash, on a small island in the White Nile river, close to Juba airport, in the Hai Gabat residential area, on November 4, 2015. At least 27 people were killed today when a plane crashed shortly after taking off from South Sudan’s capital Juba, an AFP reporter said. Police were pulling the bodies of men, women and children out of the wreckage of the Russian-built Antonov An-12 cargo plane, which smashed into a farming community on an island on the White Nile river, according to the reporter, who counted at least 27 dead. (AFP Photo/Charles Lomodong) 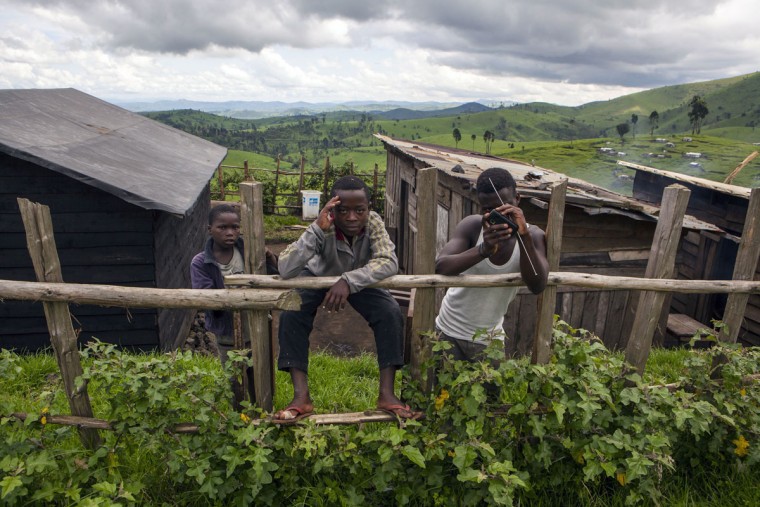 Cheese factory workers pose in Kilolirwe in the eastern territory of Masisi on November 2, 2015. Masisi in the Democratic Republic of the Congo is known for the production of cheese, a legacy started by Belgian priests in 1975. (AFP Photo/Eduardo Soteras) 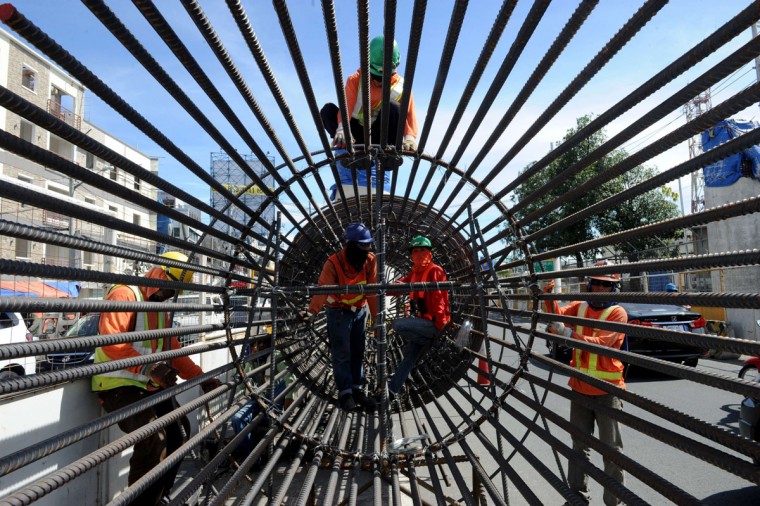 Construction workers prepare to put up a column for an elevated highway project in Manila on November 4, 2015. The government is rushing the construction of toll roads to solve a worsening traffic situation. (AFP Photo/Jay Directo) 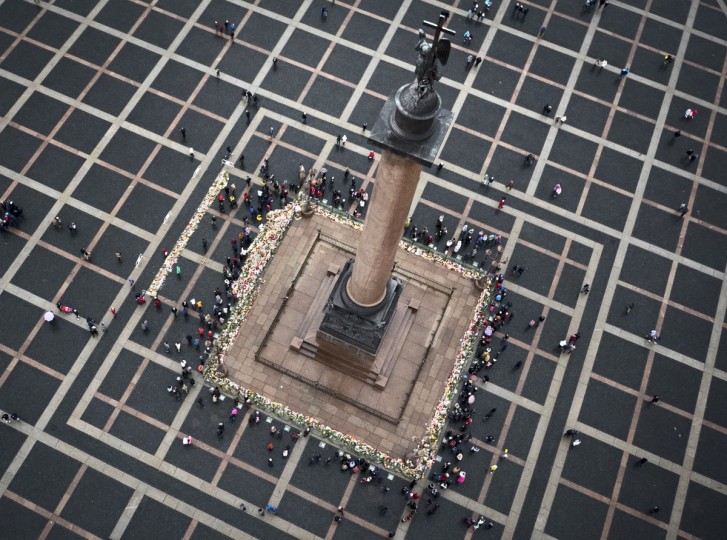 People gather to place floral tributes at the foot of the Alexander Column at Dvortsovaya (Palace) Square in St. Petersburg, Russia, Wednesday, Nov. 4, 2015. A Russian official says families have identified the bodies of 33 victims killed in Saturday’s plane crash over Egypt. The Russian jet crashed over the Sinai Peninsula early Saturday, killing all 224 people on board. Most of them were holidaymakers from Russia’s St. Petersburg. (AP Photo/Dmitry Lovetsky) 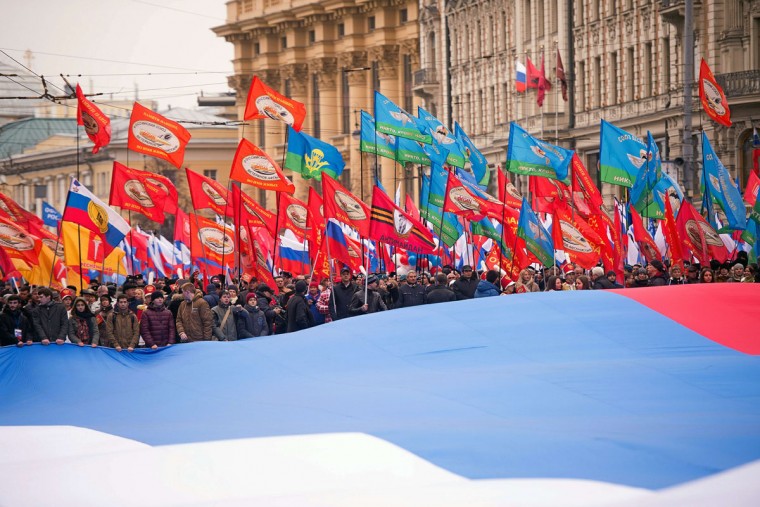 Pro-Kremlin supporters march in central Moscow on November 4, 2015 as they celebrate the National Unity Day, marking the 403rd anniversary of the 1612 expulsion of Polish occupation forces from the Kremlin. (AFP Photo/Alexander Utkin) 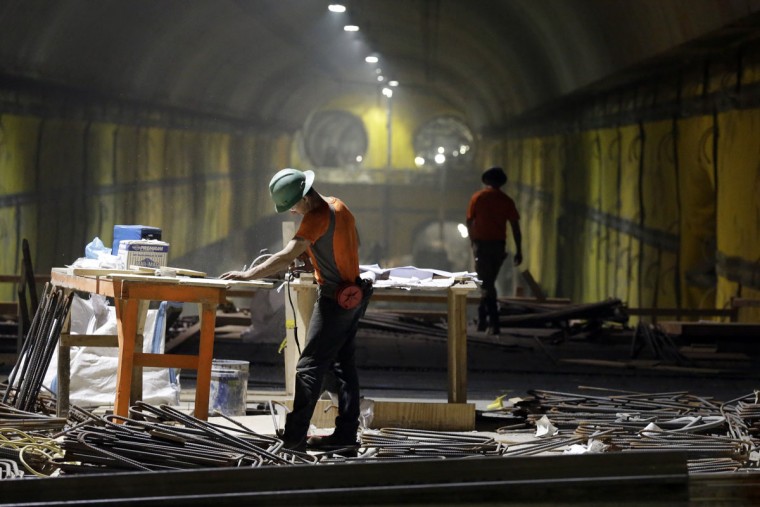 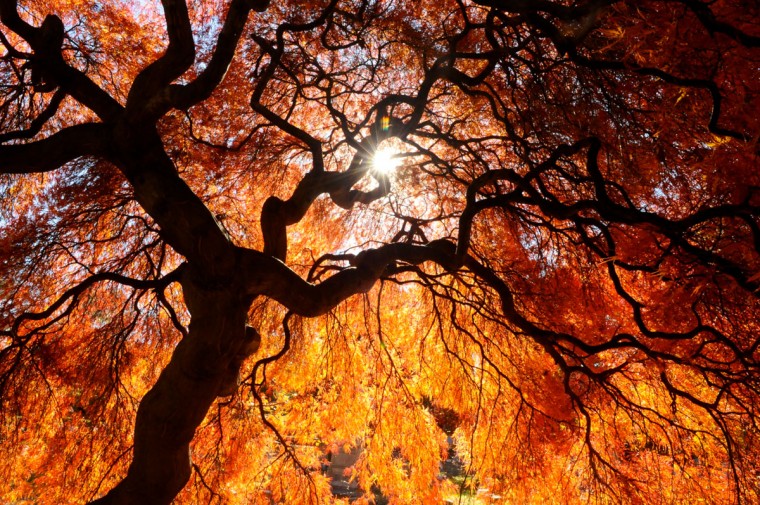 Sun shines through a Japanese Maple tree at Charles Baber Cemetery in Pottsville, Pa., on Wednesday, Nov. 4, 2015. The cemetery is the largest green space and also serves as a garden park with tree-lined walking paths, a small spring fed pond and a meditation area. (Jacqueline Dormer/The Republican-Herald via AP) 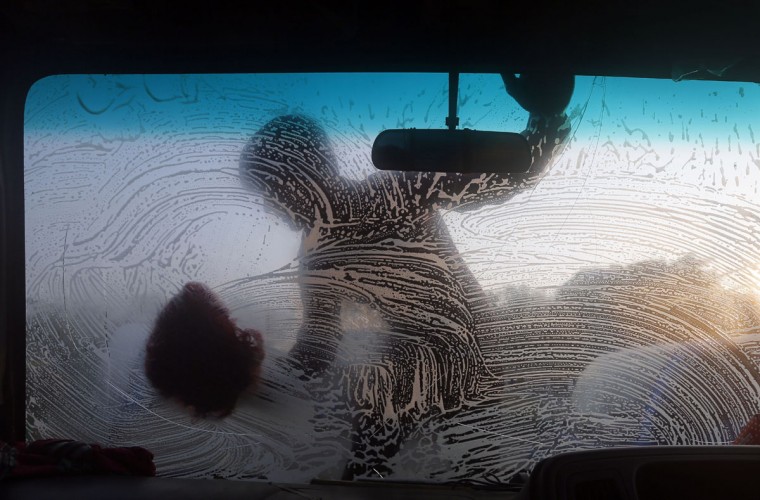 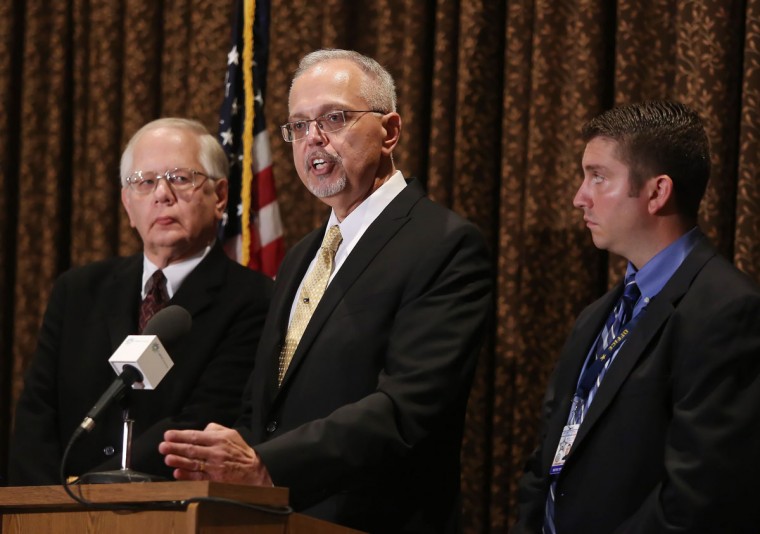 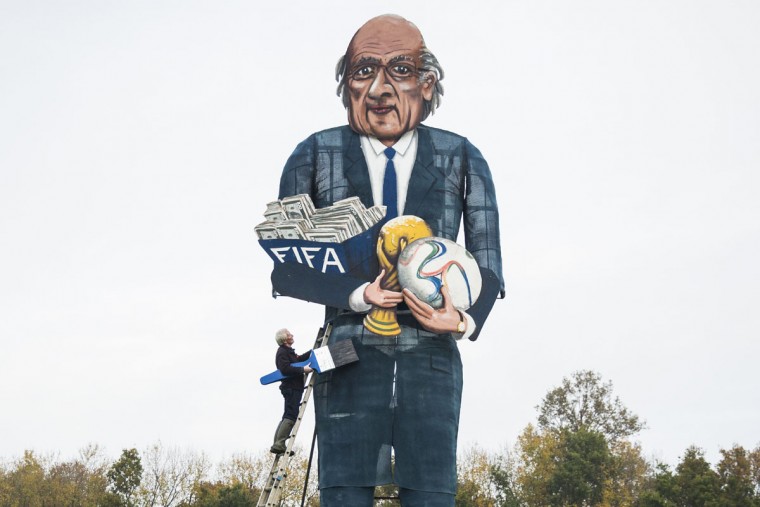 British artist Frank Shepherd of the Edenbridge Bonfire Society poses putting the finishing touches to a giant effigy of the suspended president of FIFA Sepp Blatter in Edenbridge, Kent, southeast England, on November 4, 2015 that will be exploded and burned at this year’s Bonfire Night celebrations. The Edenbridge Bonfire Society has been making fun of public figures for 20 years by building and exploding a second ‘celebrity Guy’ effigy alongside their traditional figure of Guy Fawkes as part of the Bonfire Night celebrations in the town. Blatter was suspended from his role as FIFA president in October 2015 by FIFA’s independent ethics committee for 90 days as part of a wide-ranging investigation into corruption at the heart of world football’s governing body. (AFP Photo/Jack Taylor) 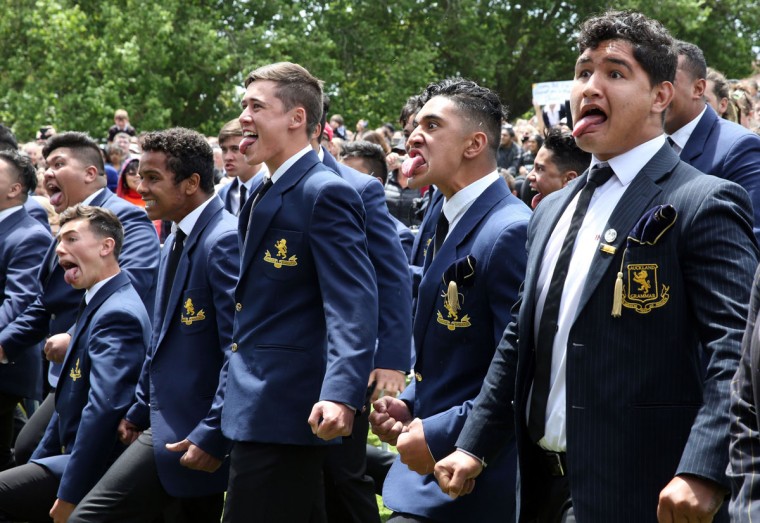 Students perform a Hakka for New Zealand’s All Blacks after their arrival at a parade and official welcome for the team in Auckland on November 4, 2015, following the team’s Rugby World Cup win against Australia. The New Zealand All Blacks returned to Auckland after they won the Rugby World Cup beating Australia in the final in England. (AFP Photo/Michael Bradley) 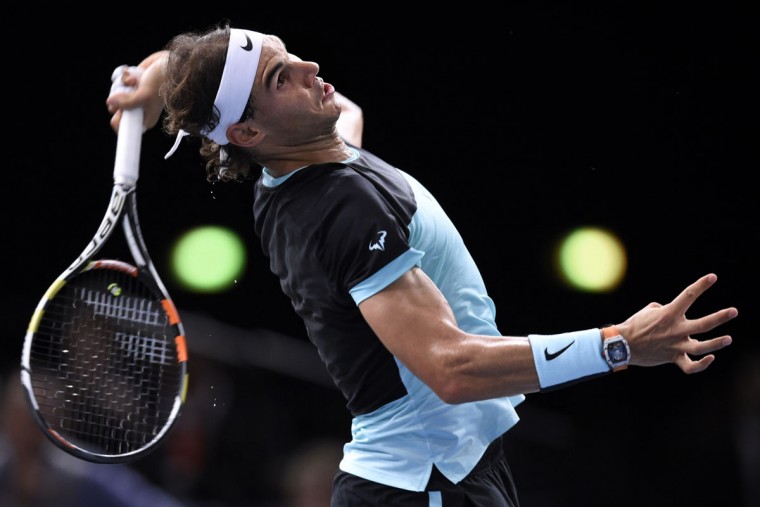 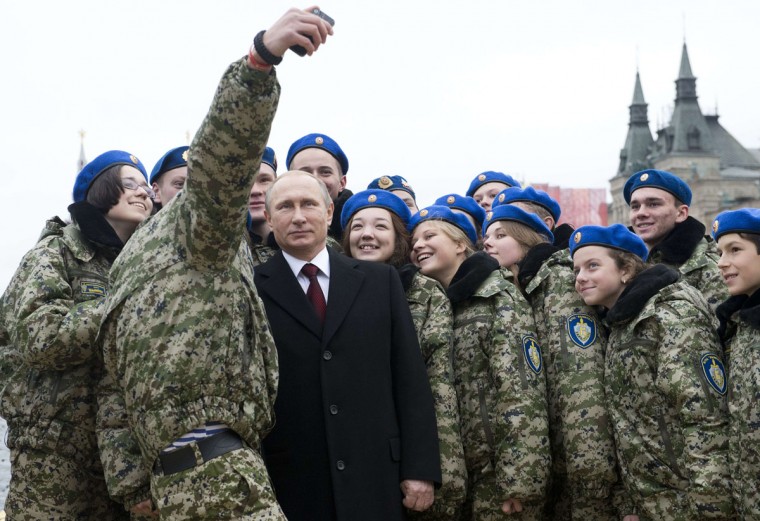 Russian President Vladimir Putin (C) poses for a selfie with young activists at the Red Square in Moscow on November 4, 2015 during celebrations for National Unity Day marking the 403rd anniversary of the 1612 expulsion of Polish occupation forces from the Kremlin. (AFP Photo/Natalia Kolesnikova) 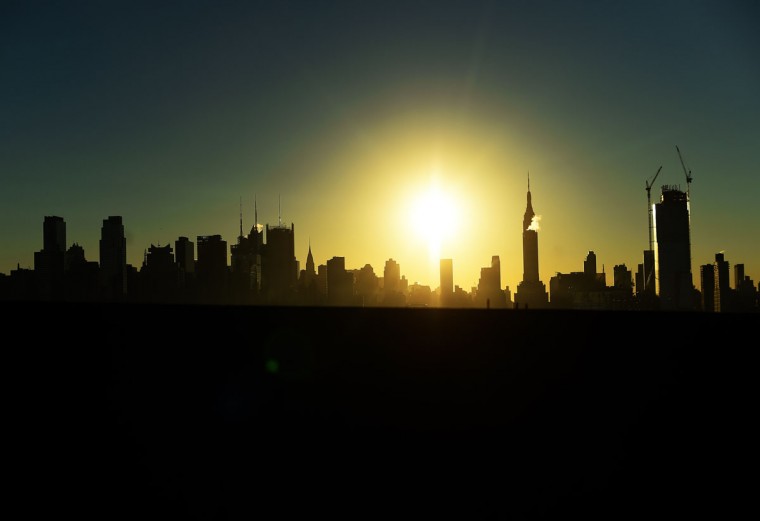 The sun rises over the Manhattan skyline in New York on November 3, 2015. (AFP Photo/Jewel Samad) 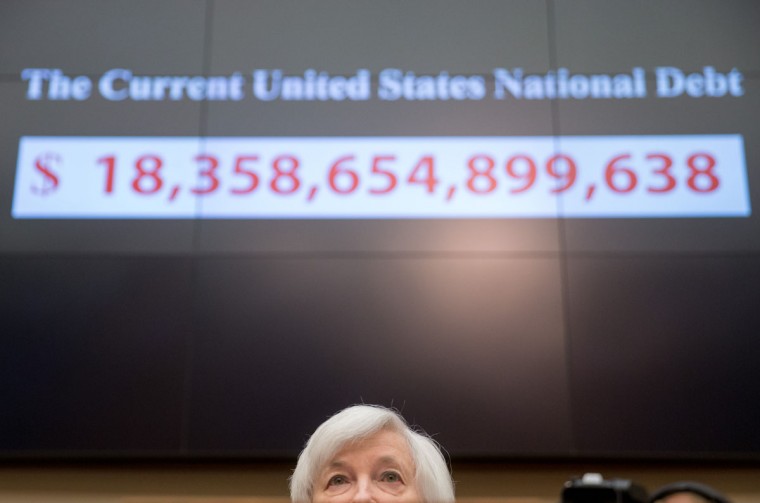 A screen depicting the current national debt of the United States is displayed behind Federal Reserve Chair Janet Yellen as she testifies on Capitol Hill in Washington, Wednesday, Nov. 4, 2015, before the House Financial Services Committee hearing on banking supervision and regulation. (AP Photo/Andrew Harnik) 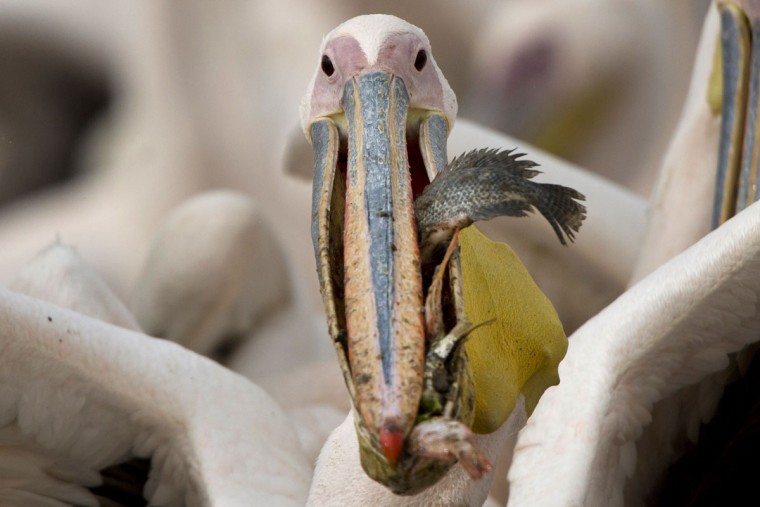 A Great White Pelicans eats fish in the Mishmar HaSharon reservoir, Israel, Wednesday, Nov. 4, 2015. Thousands of Pelicans stop in the reservoir for food provided by the Israeli nature reserves authority as they make their way to Africa. (AP Photo/Ariel Schalit) 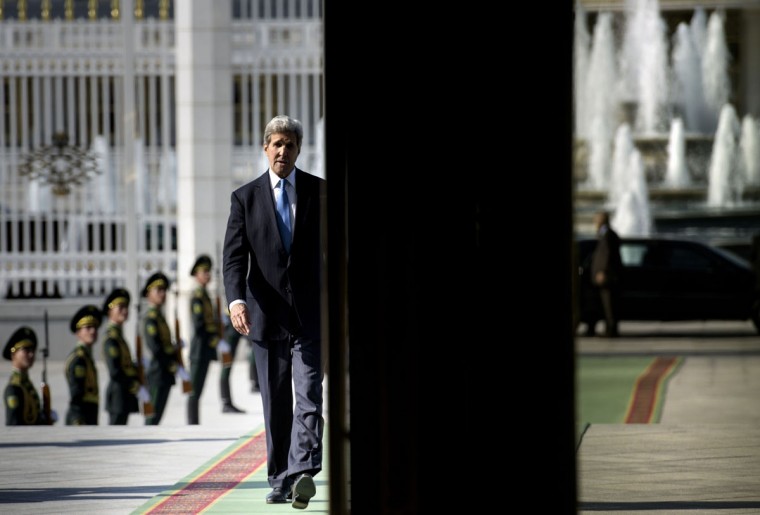 US Secretary of State John Kerry arrives for a meeting with Turkmen President Gurbanguly Berdimuhamedov at the Oguzkhan Presidential Palace on November 3, 2015 in Ashgabat. Kerry is traveling to Tajikistan and Turkmenistan on the last day of his travels in the region as he visits five Central Asian nations. (AFP Photo/Brendan Smialowski) 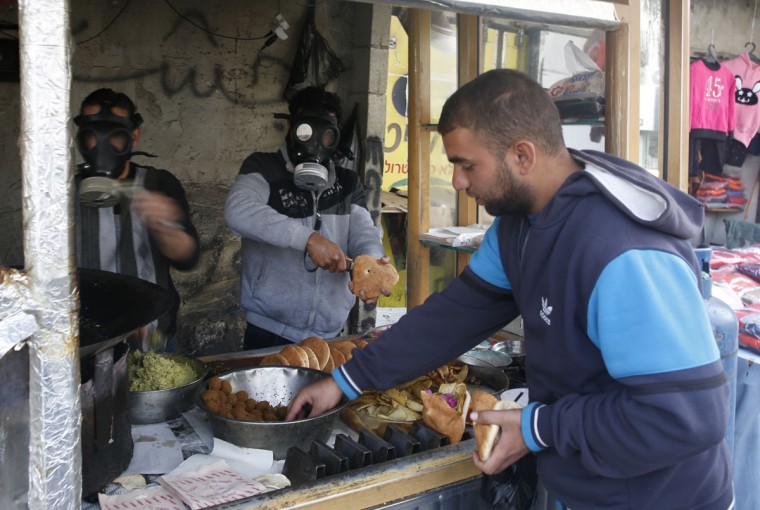 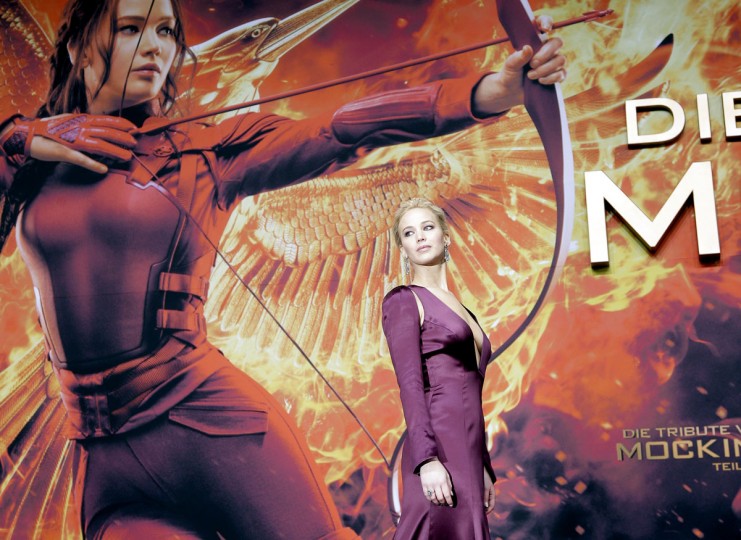 Actresses Jennifer Lawrence poses for photographers as she arrives for the World premiere of the movie ‘The Hunger Games: Mockingjay – Part 2’ in Berlin, Germany, Wednesday, Nov. 4, 2015. (AP Photo/Michael Sohn) 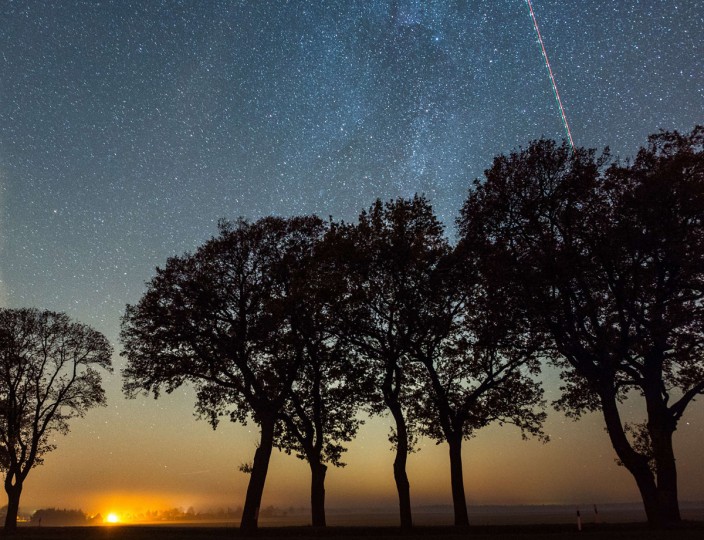 Light traces of an airplane cross the sky that is spangled with stars of the milky way on November 3, 2015 near Petersdorf, northeastern Germany. The peak of the Leonids meteor shower is expected for mid-November 2015. (AFP Photo/Patrick Pleul)