Post-mortem: Burying the dead in a most violent year

BALTIMORE (AP) — In the corner of his office, John Williams set down a gilded headstone in the shape of a teddy bear. Williams had just made it to honor an 8-month old child killed by his father — one of the sad tasks he performs as a director of a funeral parlor in a city riddled by violence. 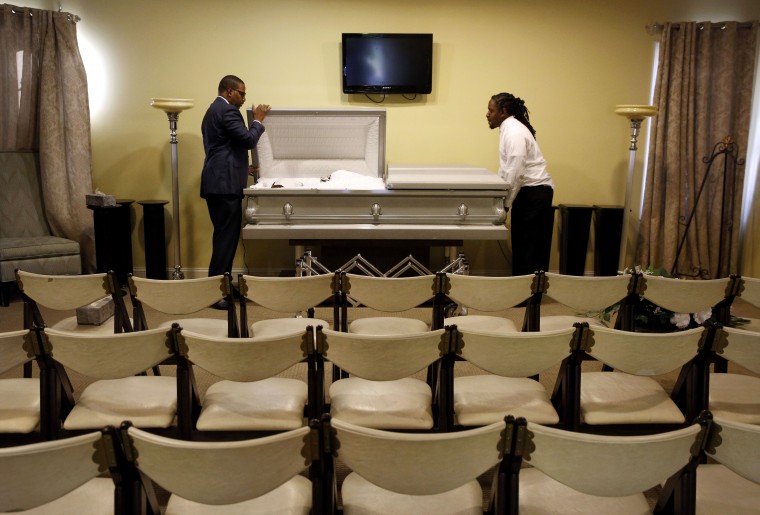 In this Oct. 16, 2015 picture, funeral director John Williams, left, closes a casket containing the remains of a man who died of natural causes in his Baltimore funeral home. Burying bodies is s a passion Williams inherited from his grandfather. Since he was a child, Williams said hes wanted to be an undertaker, to honor the dead and comfort grieving families. Guiding those whove lost loved ones gives him a sense of purpose. (AP Photo/Patrick Semansky) 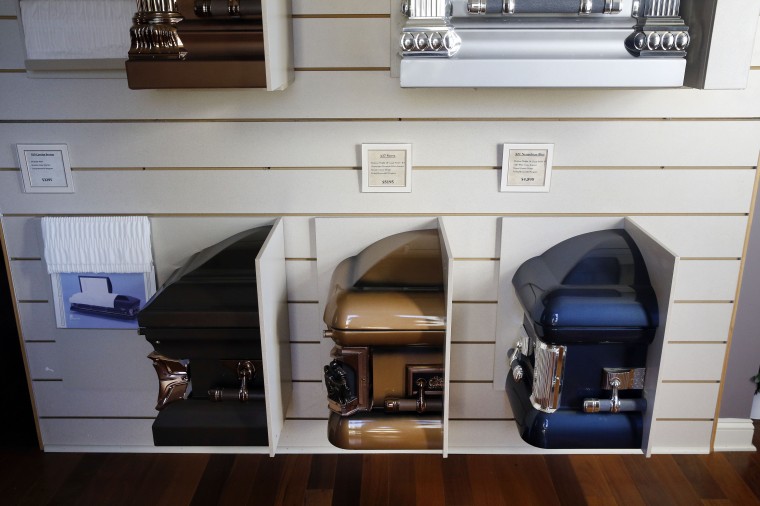 In this Oct. 16, 2015 picture, options for caskets are on display in John Williams’ funeral home Baltimore. In a city that routinely leads the country in violent crime, Baltimores murder toll has proved harrowing, even to those in the death business. I try never, ever to get numb to this,” Williams said. “But you have to shield yourself sometimes. Homicide is becoming my normal. (AP Photo/Patrick Semansky) 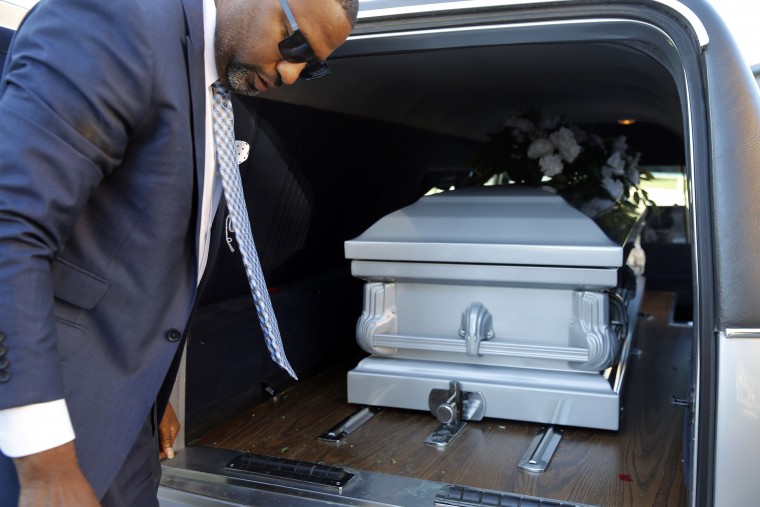 In this Oct. 16, 2015 picture, funeral director John Williams turns away after placing a casket containing the remains of a man who died of natural causes in a hearse in Baltimore. Coming off of the most violent year in the city’s recent history, Williams has buried more bodies — many of them young black men, many gunned down in the citys west side — than ever before. In a normal month, he might do three funerals. This past summer, he buried two people a week. Some died naturally, of illness or old age. Most showed up pierced by knives or bullets. (AP Photo/Patrick Semansky) 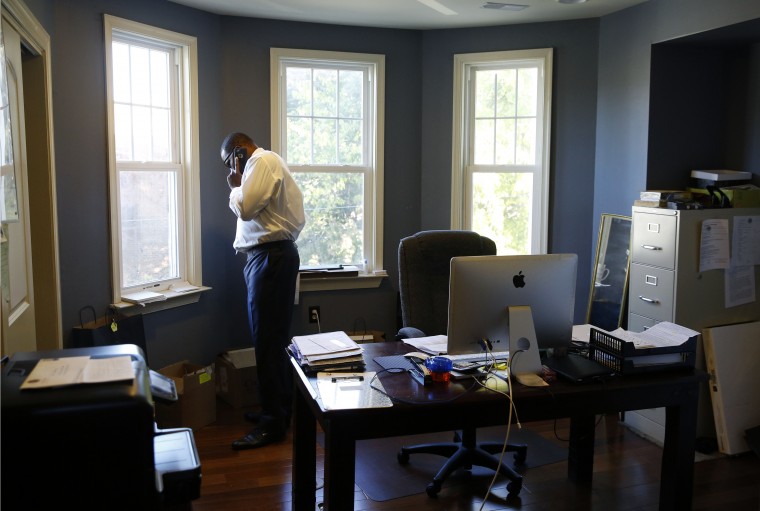 In this Oct. 16, 2015 picture, funeral director John Williams makes a phone call from his office in Baltimore. “You can’t be soft in the hood,” Williams said. You cant be soft as an undertaker either. (AP Photo/Patrick Semansky)

Coming off of the most violent year in Baltimore’s recent history, Williams has buried more bodies — many of them young black men, many gunned down in the city’s west side — than ever before. In a normal month, he might do three funerals. This past summer, he buried two people a week. Some died naturally, of illness or old age. Most showed up pierced by knives or bullets.

In a city that routinely leads the country in violent crime, Baltimore’s murder toll has proved harrowing, even to those in the death business.

“In this city, we think homicide is just another way to die,” Williams said. “But to hear a mother’s cries when she sees her son for the first time after he’s been murdered. To hear brothers and sisters and girlfriends go through that grief. To hear those shrill cries, day in and day out, week in and week out, it does something to you.”

“I try never, ever to get numb to this. But you have to shield yourself sometimes. Homicide is becoming my normal.”

Violence in the most vulnerable neighborhoods has spiked since April, when Baltimore erupted in rioting and civil unrest following the death of a black man, Freddie Gray, from injuries suffered in a police van.

As of Nov. 20, 308 people have been killed in the city this year, making 2015 the bloodiest year Baltimore has seen since 1999. The pace of killing over the summer surpassed anything the city had seen in four decades, with 45 slayings in a single month.

Williams granted The Associated Press unfettered access to his modest parlor, while officials at three of the city’s largest funeral homes declined to be interviewed for this story.

Inside Williams’ funeral home one warm late August day, soft music played downstairs as friends and relatives of a recent homicide victim visited the viewing area to see the man one last time. A woman wearing a cropped top and denim shorts bounced a 3-month-old baby on her knee as she and a small group waited outside in the parlor. Some laughed and caught up with neighbors. Others shed tears and held each other. The baby quietly cooed.

Minutes later, after Williams unlocked the door and the crowd streamed into the viewing area, the woman rushed out of the room wailing and crumpled to the floor.

Burying bodies is what Williams was born to do, he says. It’s a passion he inherited from his grandfather. Since he was a child, Williams said he’s wanted to be an undertaker, to honor the dead and comfort grieving families. Guiding those who’ve lost loved ones gives him a sense of purpose.

Since opening his home four years ago, Williams has been committed to the idea of running a tiny operation. Preserving the intimacy that comes with being personally involved in each stage of the process, from picking up the body to lowering it into the ground, presiding over the funeral service and comforting grieving relatives, remains a priority. He has only a few employees who help mostly with office work.

Since the violence began to spike Williams has worked around the clock, preparing bodies late into the night. But that’s not why he’s had trouble sleeping. Cold sweats, he says, have been waking him from uneasy dreams. He started seeing a therapist to talk about what he’s seen.

Over the years some memories have stuck with Williams.

A couple of years ago there was the 21-year-old woman shot in the chest when a man — later declared Baltimore’s “enemy No. 1” — rounded the corner as she was arguing with another woman. There was the 18-year-old boy shot dead by gang members after he refused to kill a stranger in an initiation. And this year, in August, there was the 56-year-old man who was beaten, then shot, on his front steps. The man’s mother, Williams said, wasn’t doing well. She’s stopped leaving home.

“My faith in humanity has been challenged, it really has,” Williams said.

On the day that man was to be buried, Williams led the procession through northwest Baltimore, driving slowly down its cracked streets and corners littered with trash and overgrown with shrubs. He paused to scatter rose petals on the stoop where the man was killed.

U.S. Rep. Elijah Cummings, whose district encompasses the west side, has pleaded with the black men of Baltimore to stop killing each other. “No one is benefiting,” he said, “except the morticians.”

For Williams, it’s the opposite. For the first time since opening his doors in 2011, he’s considering leaving the city.

He began his work after earning his degree in 1992 as an apprentice at the same Baltimore funeral home where his grandfather learned the trade decades earlier. It was there he came into his own and felt he was giving back to the community that reared him.

Williams was born and raised in Cherry Hill, a predominantly poor, black neighborhood in southwest Baltimore. As a teenager, to keep him out of trouble, Williams’ mother moved him outside the city limits to Baltimore County, not far from where he now lives with a 14-year-old son of his own.

He chose the Park Heights neighborhood in northwest Baltimore for his own operation, in part, he said, because “I’m Baltimore born, Baltimore bred, and when I die, I’ll be Baltimore dead.”

He loves the neighborhood, even with its splintered sidewalks, loiterers strolling down the sun-baked streets, outside whole blocks of vacant houses, next to strip malls with bulletproof glass. But the atmosphere has changed with the increase in violence, he said.

One September evening, Williams carefully prepared the body of a 36-year-old man killed during a carjacking. He washed down the man’s skin, inked with tattoos — one on his bicep read, “death is certain, life is not,”— and torn from the impact of the bullets. Williams sewed shut a bullet wound on the man’s wrist and worried whether his suit sleeve would conceal the stitches.

Williams said preparing bodies is one of his most important tasks. For those in mourning, seeing the body is a critical moment in the grieving process, Williams said, particularly when that person has been killed. In repairing physical wounds, he said, he tries to soften the blow of the brutality the victim endured, and the reality of the act committed.

“You try to put a smile on his face, to just give his family the ability to think he’s OK, to just give them that faith,” Williams said. “Most African-Americans here are Christians and believe in Heaven. You want to hope and pray that there’s something else that’s better than this. At the end of the day we still need hope, that there’s got to be a brighter side somewhere. After everything this city, this community, has been through, there’s got to be something better. There’s just got to.”