Light festivals around the world

Baltimore is one of the latest world cities to be turned on to large-scale artistic light displays. The inaugural Light City Baltimore, modeled after the Vivid Sydney festival in Australia, is planned for seven days this spring. These photos of the Sydney festival and six others around the world offer a glimpse of the type of treatments the Inner Harbor and locations in five city neighborhoods might get. 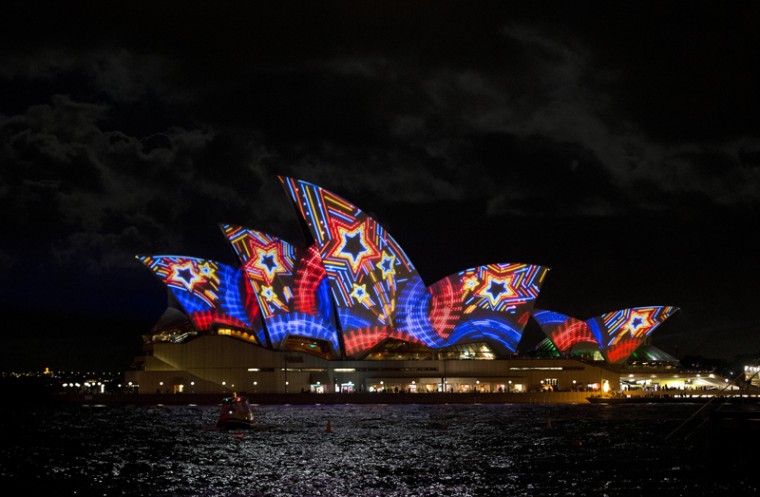 The Sydney Opera House is lit up by a projection during Vivid Sydney, the annual festival of light, music and ideas, in Sydney on May 24, 2013. More than 60 interactive and immersive light sculptures and installations across Circular Quay, The Rocks, Walsh Bay, Darling Harbour and North Sydney took part in the festival. City skyscrapers were lit along with 3D mapped projections on Customs House, Museum of Contemporary Art Australia, and Cadman’s Cottage. The inaugural Light City Baltimore is modeled after the Sydney festival. (SAEED KHAN/AFP/Getty Images) 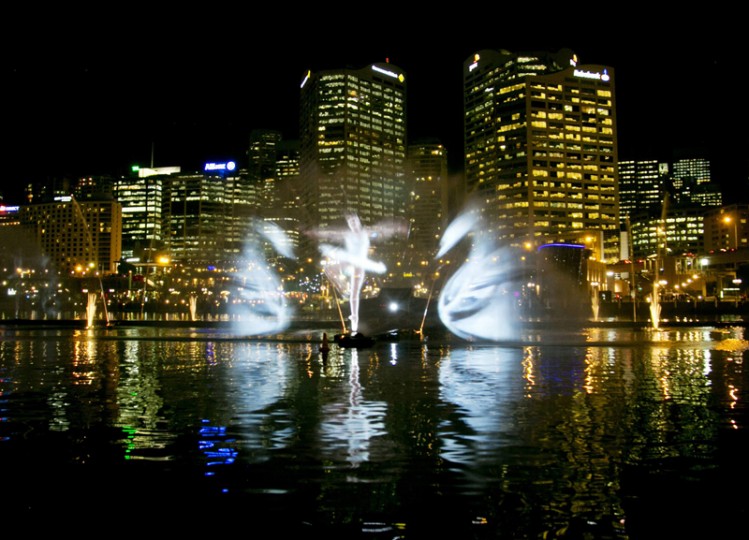 A light show featuring a ballet dancer and swans from Swan Lake is projected onto spraying water by the Vivid Aquatique Water Theatre during a preview of the Vivid Sydney light and music festival May 21, 2014. For 18 days beginning on May 23 the Vivid Sydney festival, one of the world’s largest creative industry forums, combined outdoor lighting sculptures and installations. (Jason Reed/REUTERS) 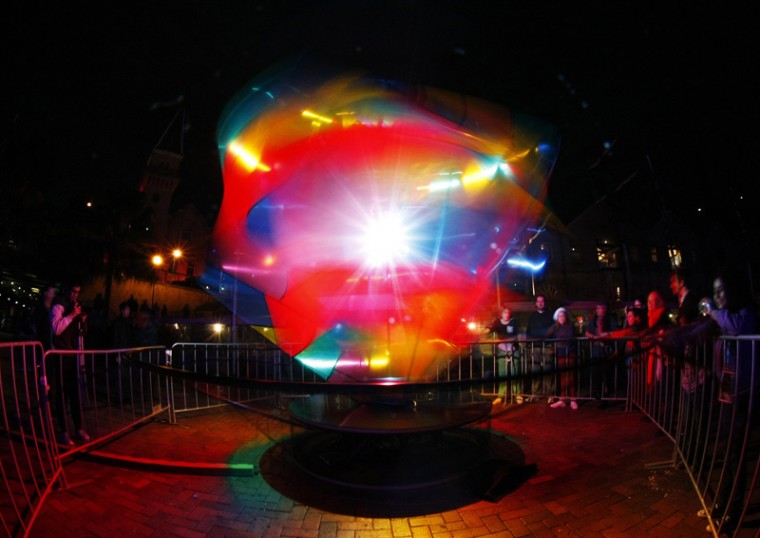 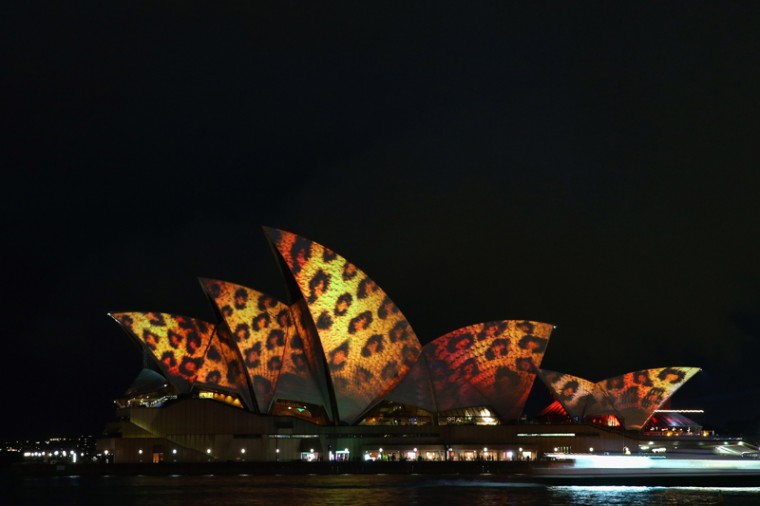 The sails of the Sydney Opera House are illuminated for the Vivid Sydney festival on May 24, 2013 in Sydney, Australia (Cameron Spencer/Getty Images) 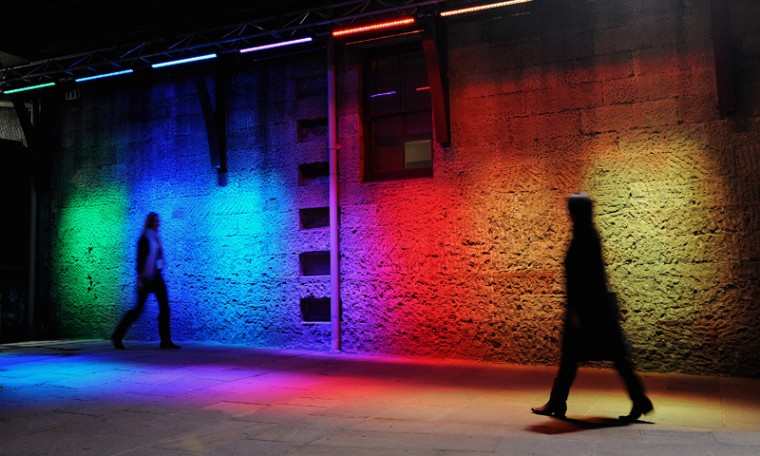 Pedestrians walk past a light art work titled “Rainbow” in Sydney on May 25, 2009. The work will form part of the “Smart Light Sydney” light walk which features 25 stunning light art works by local and international artists, which celebrate sustainable innovations and the future of low-energy lighting design. Smart Light Sydney was a cornerstone event of the inaugural Vivid Sydney festival. (GREG WOOD/AFP/Getty Images) 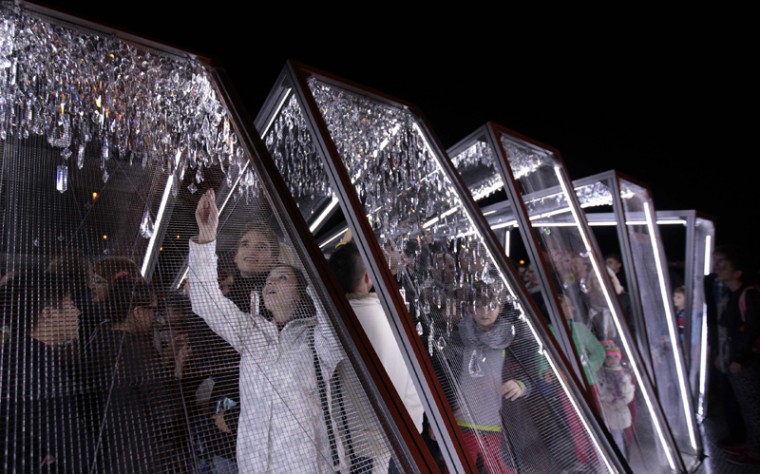 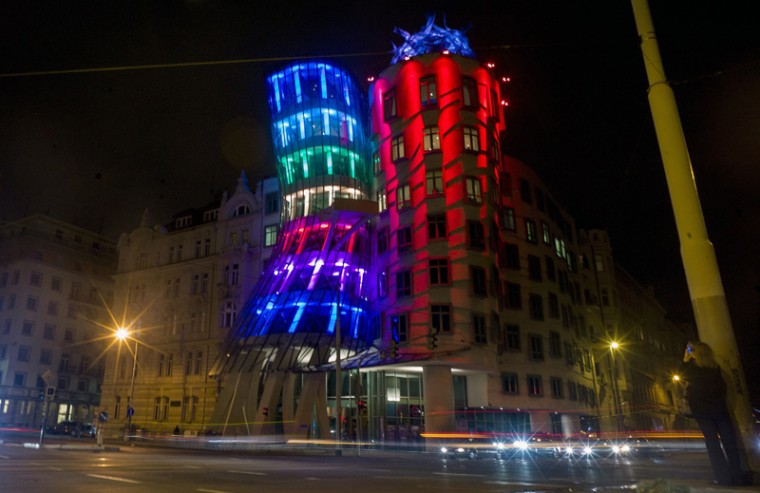 The Dancing House is illuminated by Czech artists Jaroslav Smetana and Filip Mueller during the Signal Festival Oct. 17, 2013, in Prague, Czech Republic. The first light festival in Prague brought the city’s historical buildings to life through the audio-visual installations. International and local artists revealed trends of new technologies in lighting design in the streets of Prague featuring video mapping projections, audio-visual installations including light sculptures and other light installations, concerts and performances. (MICHAL CIZEK/AFP/Getty Images) 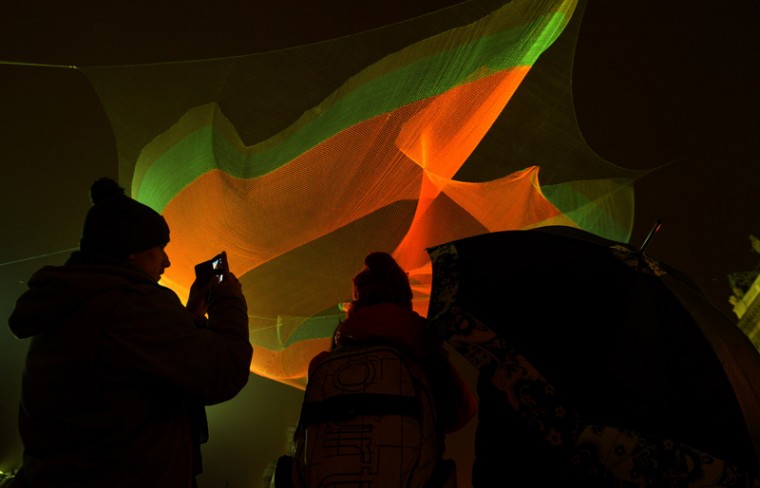 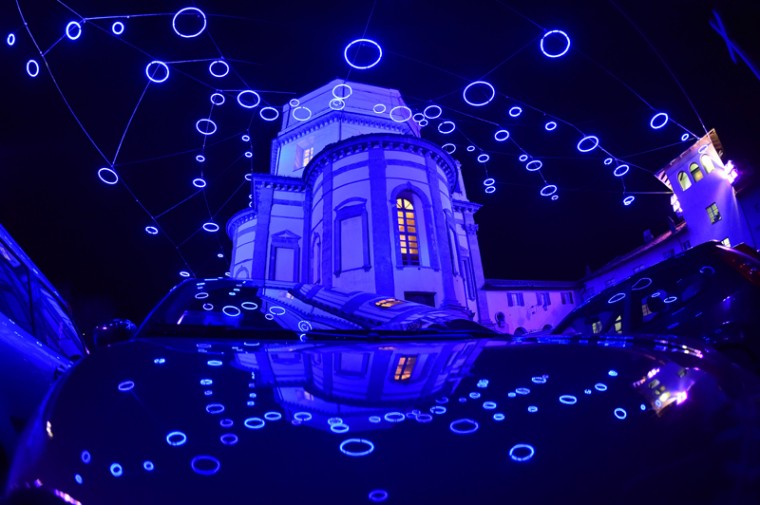 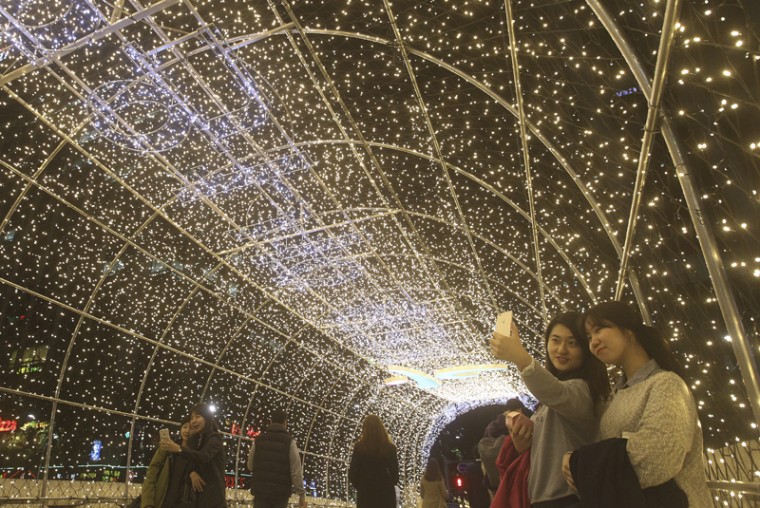 In this file photo, visitors take pictures under a tunnel of lights on the eve of Seoul Lantern Festival, which will be held through Nov. 22, along Cheonggye stream in Seoul, South Korea. (Ahn Young-joon/AP) 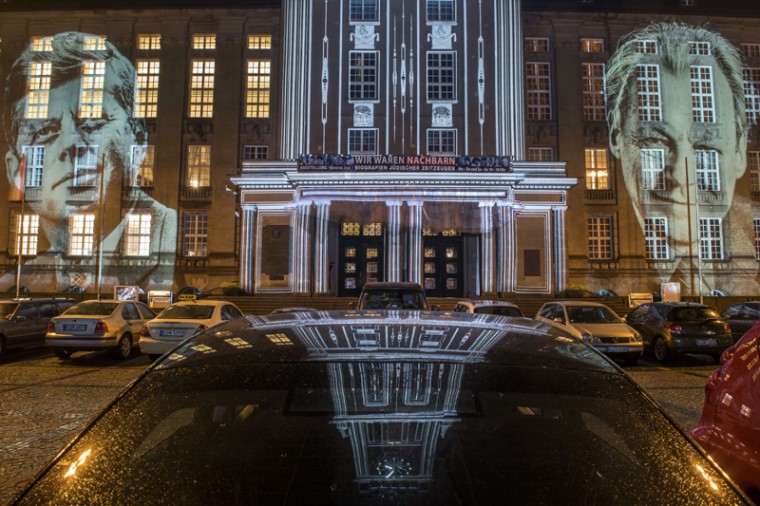 Giant portraits of former U.S. President John F Kennedy and German Chancellor Willy Brandt are cast on the facade of the town hall of the Schoeneberg district in Berlin on Oct. 14 as part of the Berlin Leuchtet light festival. The town hall of the Tempelhof-Schoeneberg borough of the German capital was the seat of the West Berlin state senate until 1991 and is the venue where US President Kennedy made his famous speech in the then-divided city on June 26th, 1963 declaring “Ich bin in Berliner.” (ODD ANDERSEN/AFP/Getty Images) 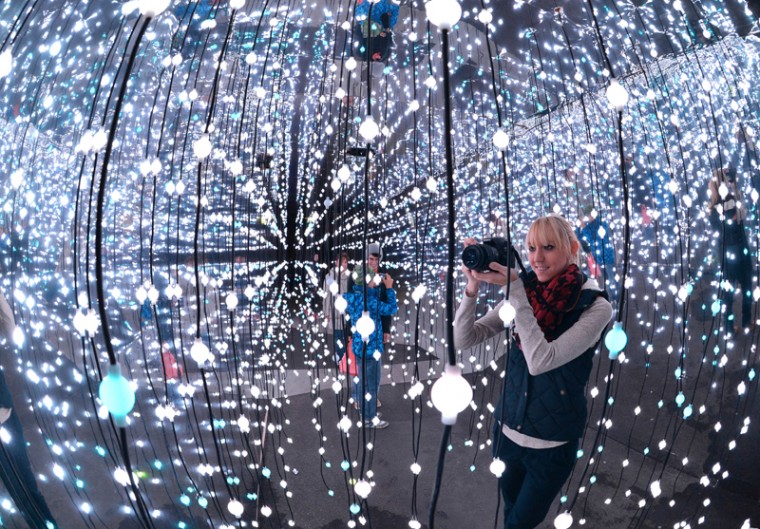 In this Oct. 8 photo, a woman takes a photograph in the light installation “Light Walk” during the light and science festival in Jena, eastern Germany. (Martin Schutt/dpa via AP) 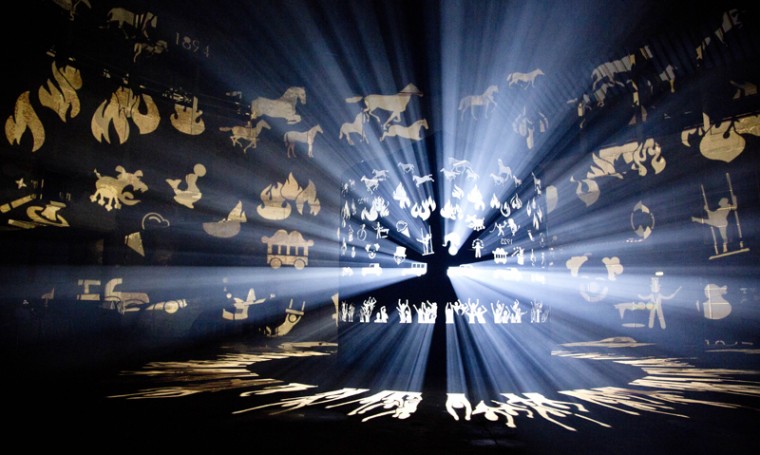 A projection turns and throws images onto a wall during the light festival in Ghent, Belgium, on Feb. 1. More than 40 light installations were on display during the festival, which takes places every three years. (Virginia Mayo/AP) 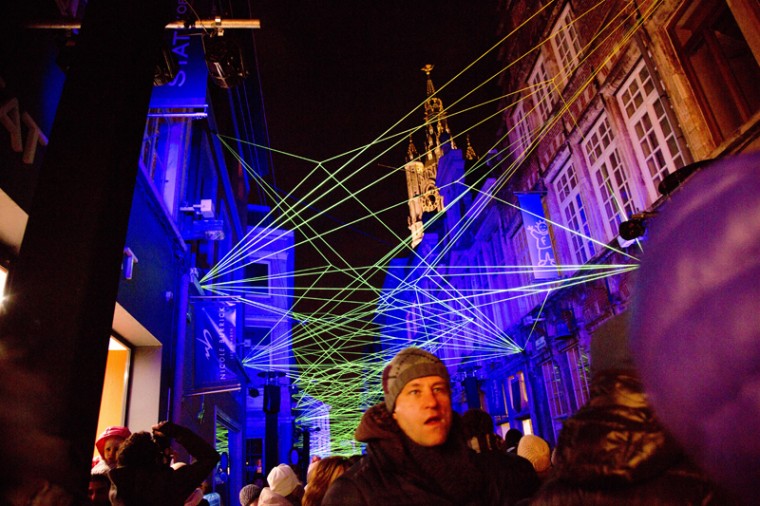 Visitors walk down an alley with a light projection display during the light festival in Ghent, Belgium on Feb. 1. (Virginia Mayo/AP) 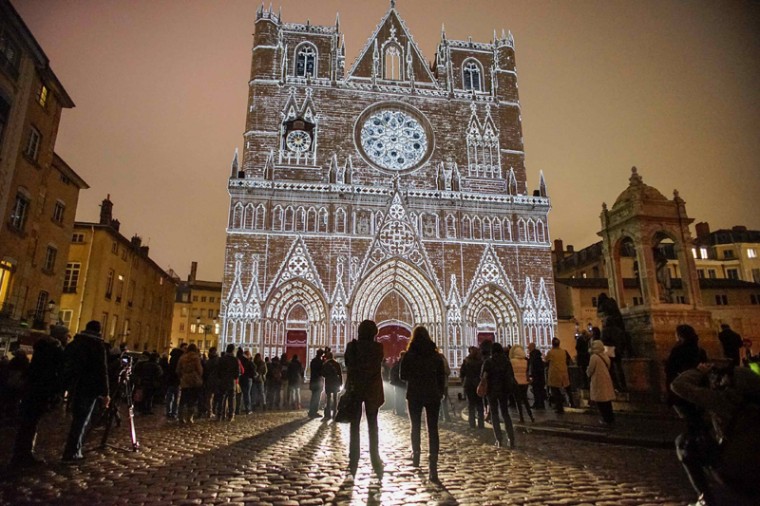 View of Color or Not installation by artist Yves Moreaux at the Saint-Jean Cathedral during the rehearsal for the Festival of Lights in central Lyon late in the night December 4, 2014. The Festival of Lights (Fetes des Lumieres), with designers from all over the world, is one of Lyon’s most famous festivals. (Robert Pratta/REUTERS) 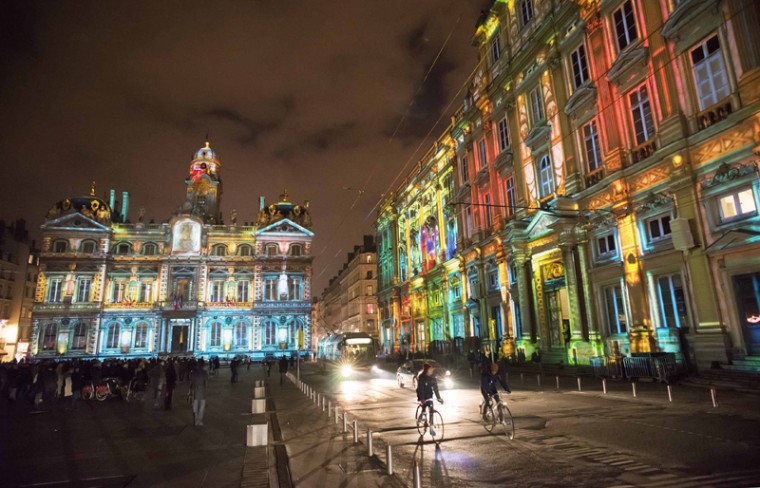 View of Le Prince des Lumieres installation by artist Damien Fontaine during the rehearsal for the Festival of Lights in central Lyon late in the night December 5, 2013. (Robert Pratta/REUTERS)