Day of the Dead celebrations, plane crash in Egypt, elephants in India | Nov. 1 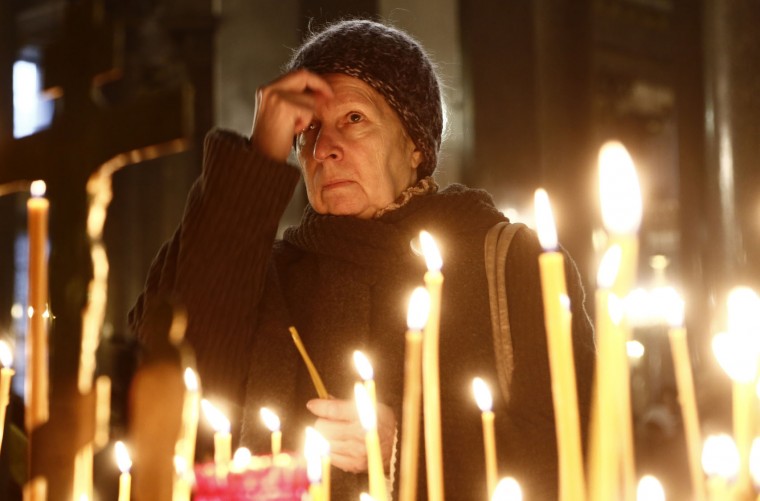 A woman prays as she lights a candle in a church in St. Petersburg during a day of national mourning for the plane crash victims in St. Petersburg, Russia, on Sunday, Nov. 1, 2015. A Russian passenger plane has crashed in the Sinai peninsula Saturday with 217 passengers, mostly Russians, and seven Russian crew members killed. (AP Photo/Dmitry Lovetsky) 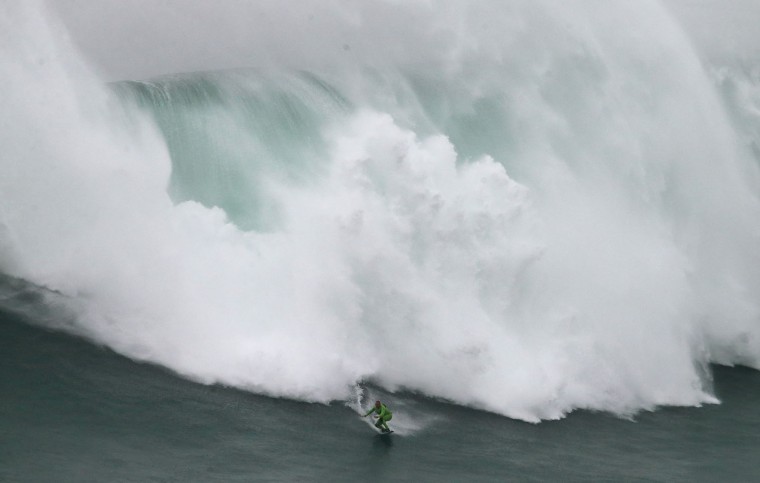 US surfer Garrett McNamara rides a big wave during a tow-in surfing session at the Praia do Norte, or North beach, in Nazare, Portugal, Sunday, Nov. 1, 2015. McNamara set a world record for the largest wave surfed when he rode a 23.7 metre wave (78-foot) in Nazare in 2011. (AP Photo/Armando Franca) 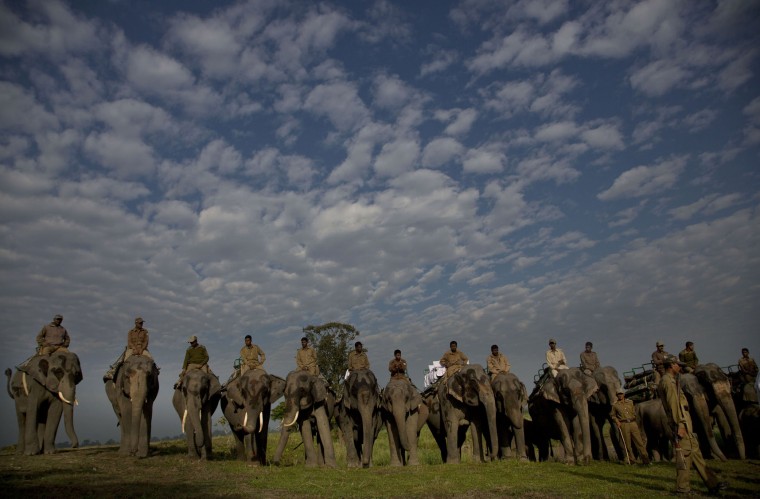 Elephants are lined up for tourists to ride at the Kaziranga national park at Kaziranga, northeastern Assam state, India, Sunday, Nov. 1, 2015. The park was reopened Sunday for tourists after its routine closure during the monsoon season. Assam is home to the world’s largest concentration of rhinos. (AP Photo/ Anupam Nath) 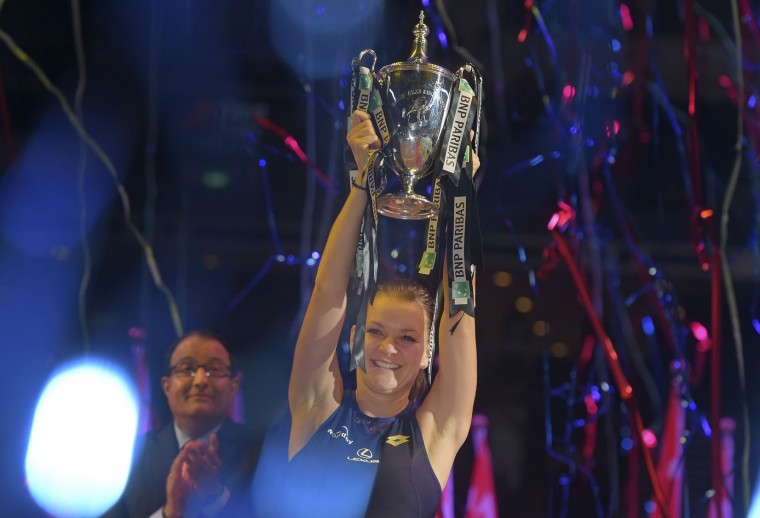 Agnieszka Radwanska of Poland raises her trophy after winning the singles final against Petra Kvitova of Czech Republic at the WTA tennis finals in Singapore Sunday, Nov. 1, 2015. (AP Photo/Joseph Nair) 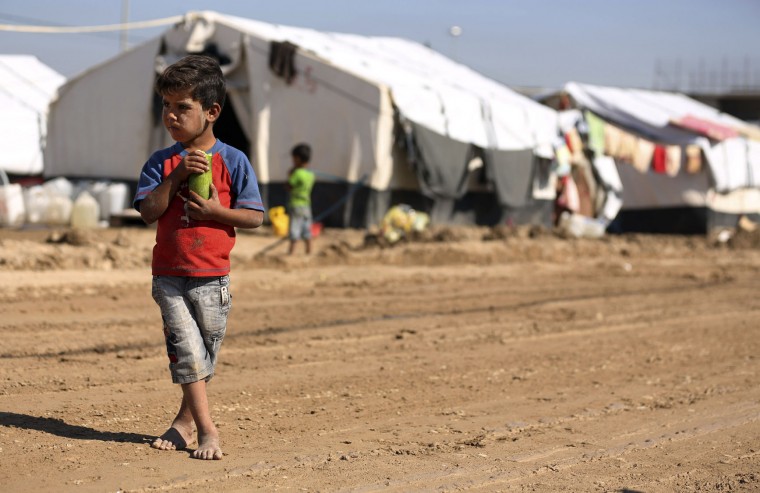 An internally displaced child eats a cucumber at a refugee camp that has partly become muddy due to recent heavy rains in Youssifiyah, 12 miles (20 kilometers) south of Baghdad, Iraq, Sunday, Nov. 1, 2015. Rain storms began late Wednesday and continued through the morning Thursday, dumping heavy rains on the Iraqi capital and across the country. (AP Photo/Hadi Mizban) 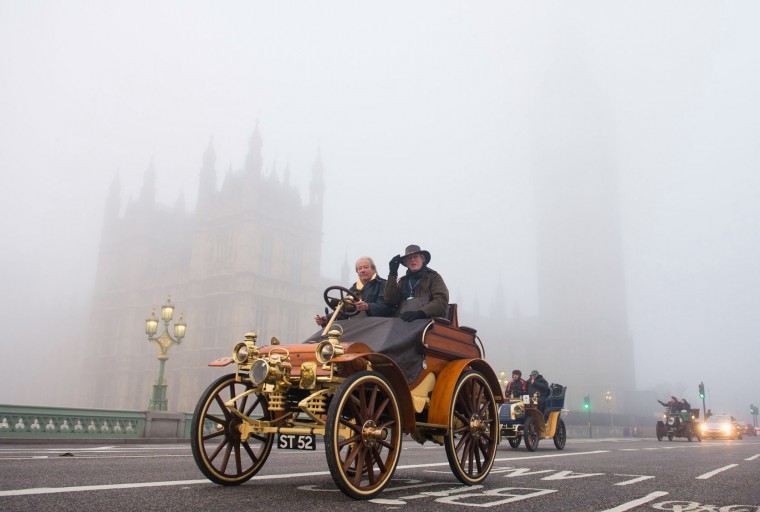 Participants in the London to Brighton Veteran Car Run, cross Westminster Bridge in London, with the houses of parliament partially seen through the morning fog, in London, Sunday Nov. 1, 2015. The London to Brighton Veteran Car Run is a long running traditional event only cars built before January 1, 1905, eligible to take part in the 54 miles (87 km) route, watched by thousands of onlookers. (Dominic Lipinski / PA via AP) 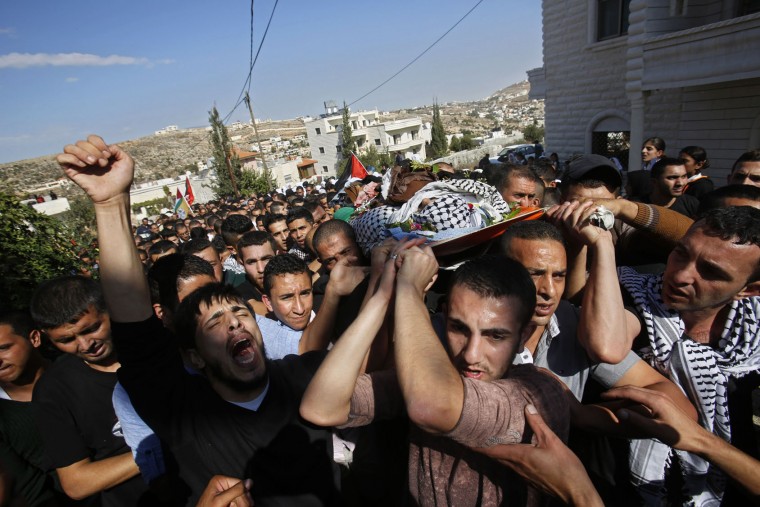 Palestinian mourners carry the body of 22 year-old, Raed Jaradat, during his funeral in the West Bank village of Sa’ir, near Hebron, Sunday, Nov 1, 2015. According to the Israeli army Jaradat stabbed an Israeli before being shot and killed. In recent days, Hebron has become a main flashpoint of Israeli-Palestinian violence, with near-daily deadly confrontations at Israeli checkpoints that guard ultra-nationalist Jewish settlers in the center of the city. (AP Photo/Nasser Shiyoukhi) 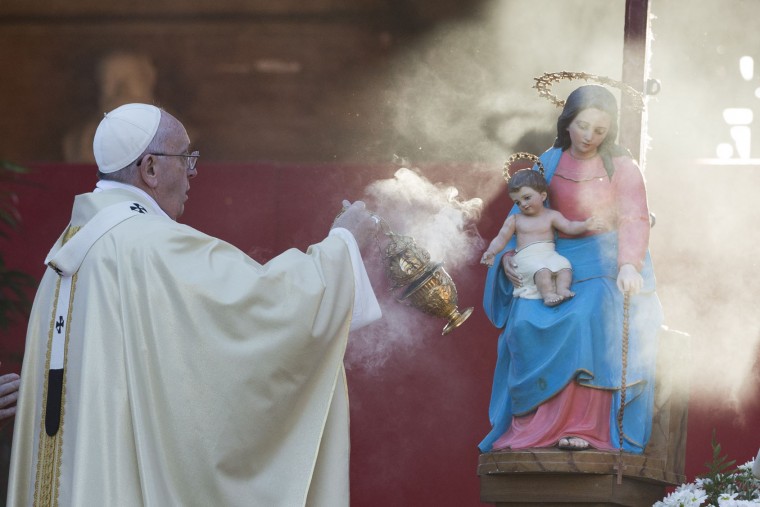 Pope Francis incenses a statue of the Virgin Mary with baby Jesus as he arrives to celebrate mass at Rome’s Verano cemetery, on the occasion of All Saints Day festivity, Sunday, Nov. 1, 2015. (AP Photo/Andrew Medichini) 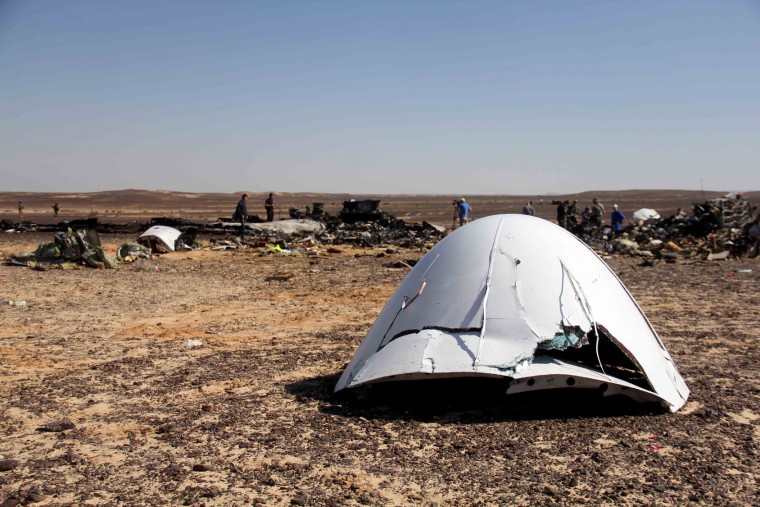 Debris of a Russian airplane is seen at the site a day after the passenger jet bound for St. Petersburg, Russia, crashed in Hassana, Egypt, on Sunday, Nov. 1, 2015. The Metrojet plane, bound for St. Petersburg in Russia, crashed 23 minutes after it took off from Egypt’s Red Sea resort of Sharm el-Sheikh on Saturday morning. The 224 people on board, all Russian except for four Ukrainians and one Belarusian, died. (AP Photo) 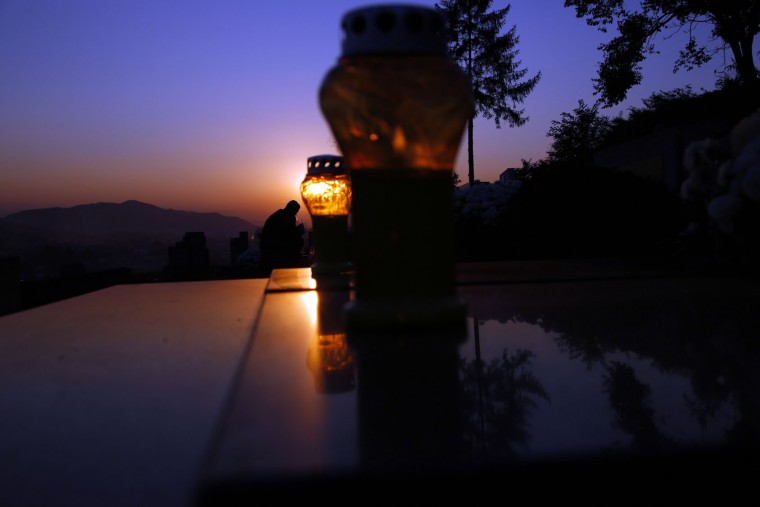 A Bosnian man lights candle at the grave of his relative in the cemetery during All Saints Day festivities in Catholic cemetery in northern Bosnian town of Tuzla, 100 kms northeast of Sarajevo, Bosnia, on Sunday, Nov. 1, 2015. (AP Photo/Amel Emric) 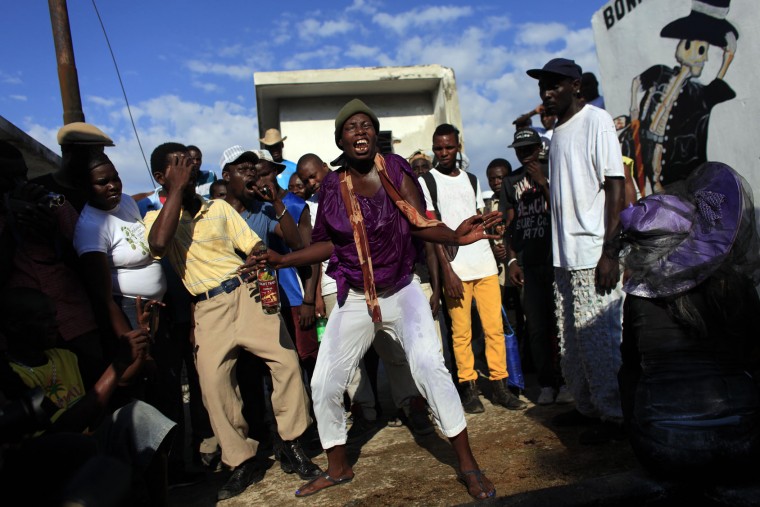 A woman in the role of a spirit known as a “Gede” dances during a Voodoo ritual in tribute to Baron Samdi and the Gede family of spirits during Day of the Dead celebrations at the National Cemetery in Port-au-Prince, Haiti, Sunday, Nov. 1, 2015. Day of the Dead traditions coincide with All Saints Day and All Souls Day on Nov. 1 and 2. (AP Photo/Ricardo Arduengo) 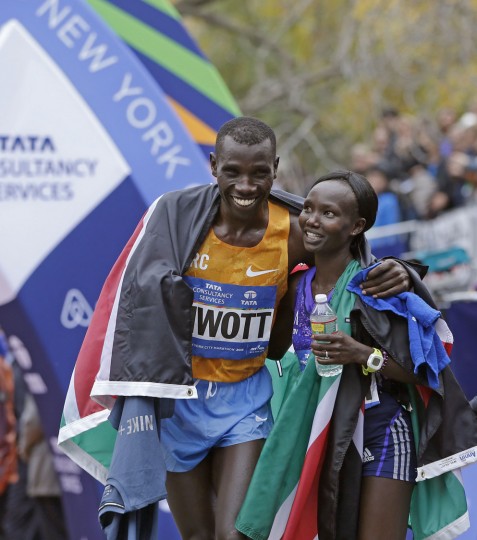 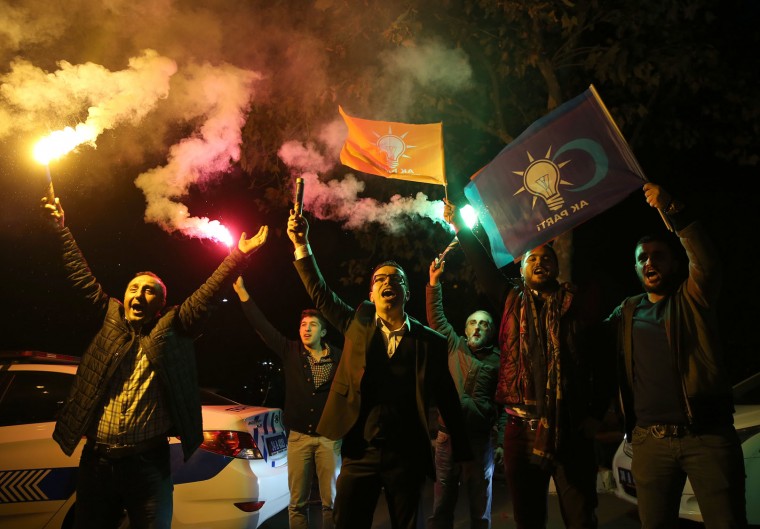 Supporters of Turkey’s President Recep Tayyip Erdogan and of The Justice and Development Party, (AKP), celebrate in Istanbul, Sunday, Nov. 1, 2015. Preliminary results in Turkeys parliamentary election suggest that the ruling party has restored its majority in a stunning victory. State-run TRT television reports that with more than 95 percent of the votes counted, the ruling Justice and Development Party, or AKP, has won just above 49 percent, which would comfortably restore its ruling majority. (AP Photo/Hussein Malla) 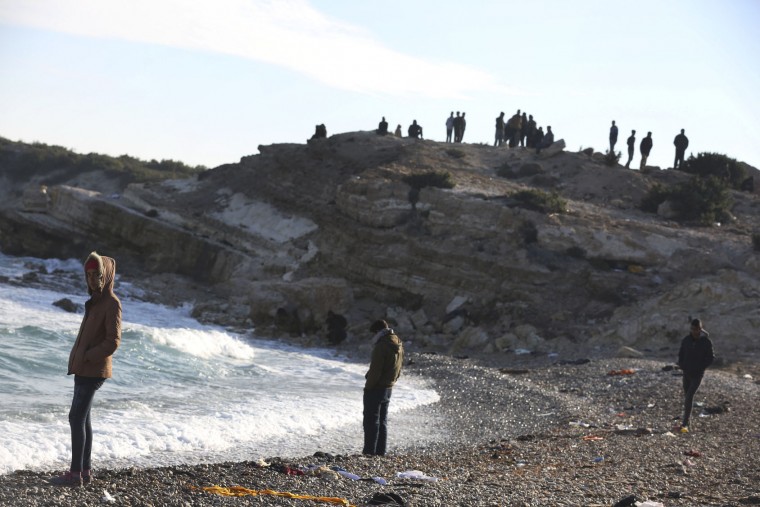 Migrants and refugees watch the rough sea as they wait to cross to the Greek island of Chios, near Cesme, Turkey, Sunday, Nov. 1, 2015. Greek authorities recovered more bodies on the Greek islands of Samos and Lesbos Sunday as thousands continue to cross the Aegean Sea from the nearby coast of Turkey despite worsening weather. (AP Photo/Emre Tazegul)