Unrest in Israeli, flooding on the eastern seaboard, fashion in Iraq | Oct. 4 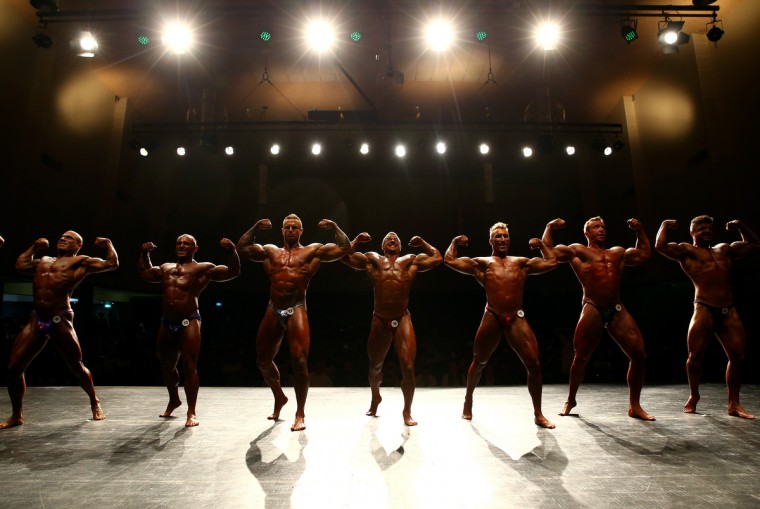 Competitors in the novice division pose during the Victoria State Bodybuiding Championships at the Kingston Arts Centre in Melbourne, Australia. (Robert Cianflone/Getty Images) 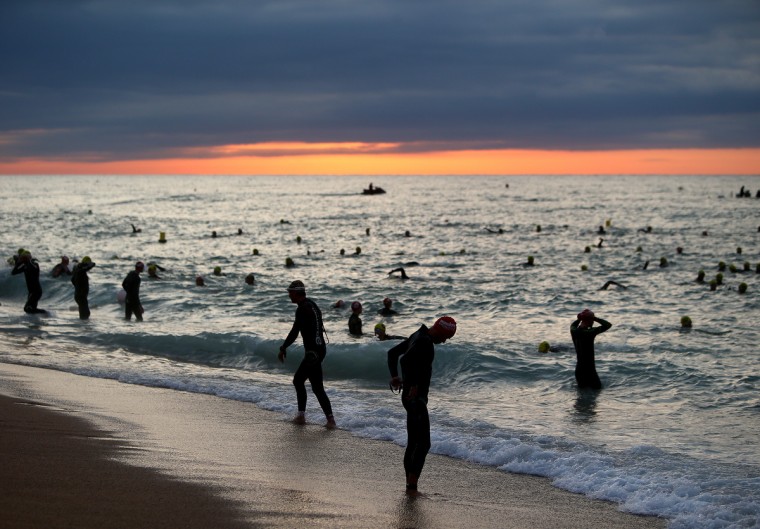 Participants compete in the swim leg of the race during Ironman Barcelona in Barcelona, Spain. (Charlie Crowhurst/Getty Images) 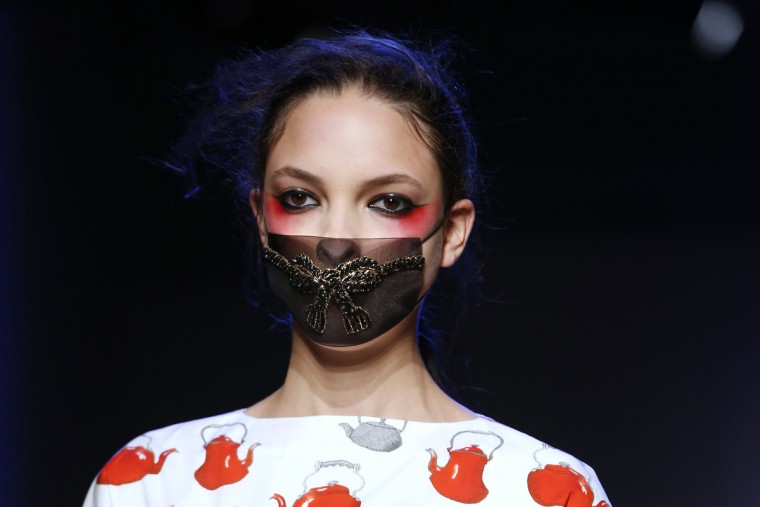 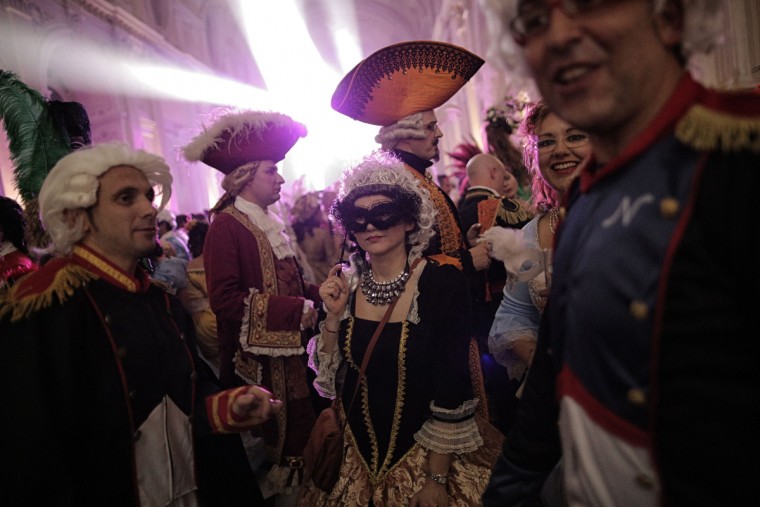 People take part in the Nuit Royale event, a ball in costume of the eighteenth century at the palace of Venaria Reale, a former royal residence near Turin. (Marco Bertorello/AFP/Getty Images) 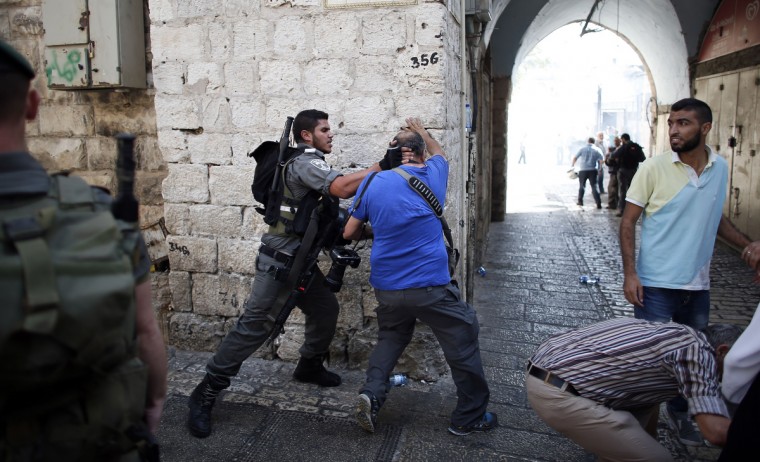 Israeli photographer Menahem Kahana (C) is roughed up by an Israeli policeman during a demonstration in a street in the Muslim quarter of Jerusalem’s Old City as Israel took a rare and drastic step of barring Palestinians from the Old City as tensions mounted following attacks that killed two Israelis and wounded a child. The restrictions will be in place for two days, with only Israelis, tourists, residents of the area, business owners and students allowed. (Thomas Coex/AFP/Getty Images) 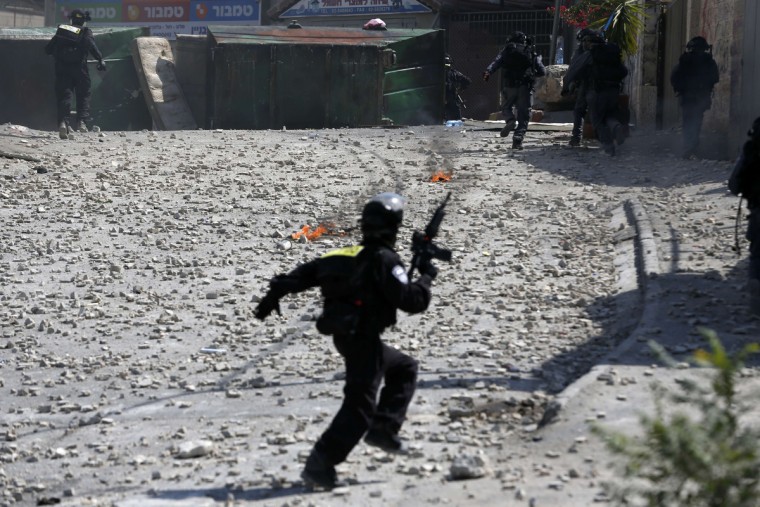 Israeli security forces run on a street strewn with stones during clashes with Palestinians in the east Jerusalem Arab neighborhood of Issawiya, where the Palestinian, who stabbed and wounded a passerby in west Jerusalem before being shot dead by police, comes from. In a separate incident, a Palestinian said to be an Islamist militant killed the day before two Israeli men and wounded a woman and a toddler in a knife and gun attack in the Old City. Police shot dead the attacker. (Ahmad Gharabli/AFP/Getty) 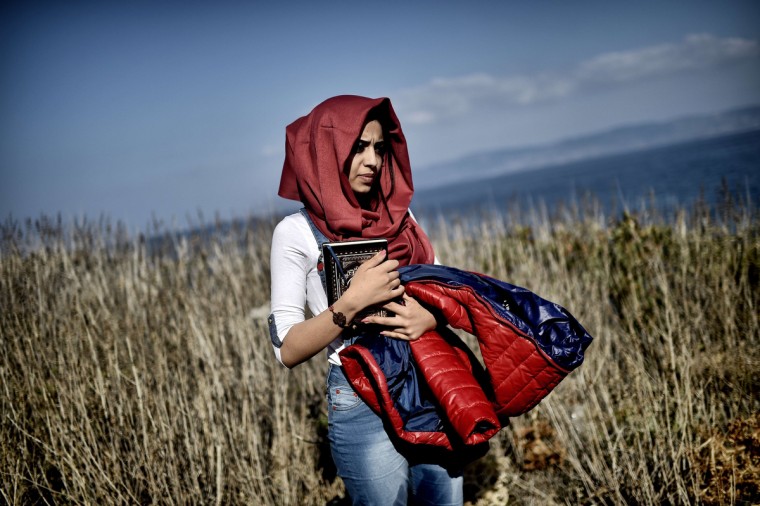 A woman walks through a field after arriving with other refugees and migrants to the Greek island of Lesbos, crossing aboard dinghies the Aegean sea from Turkey. For the thousands of refugees and migrants landing on its beaches every day, Greece’s Lesbos island is a step to safety and a brighter future in Europe. (Aris Messinis/Getty Images) 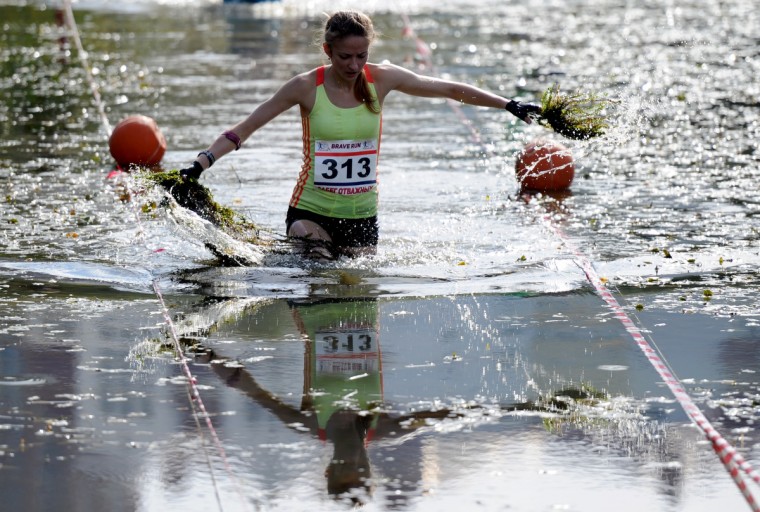 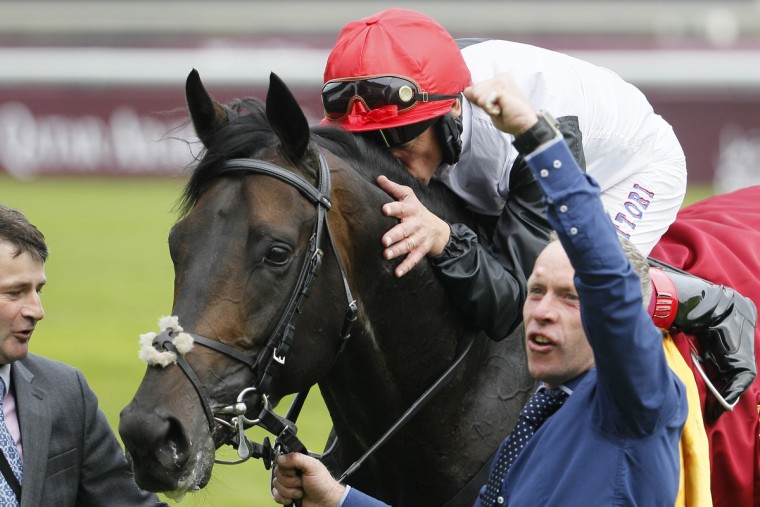 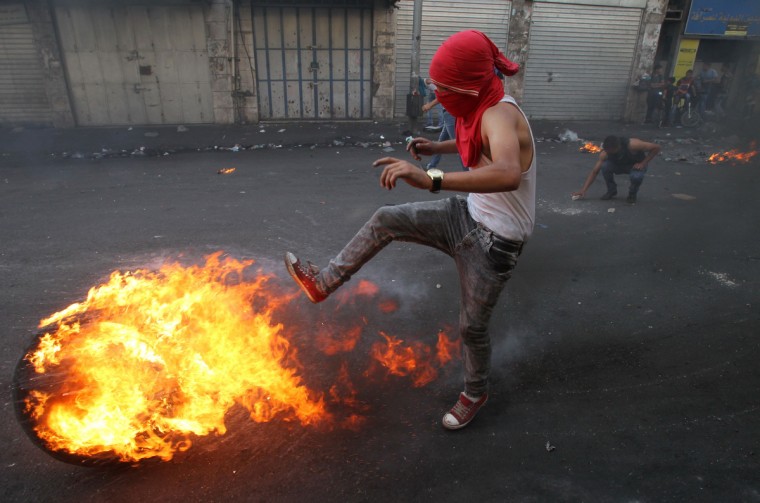 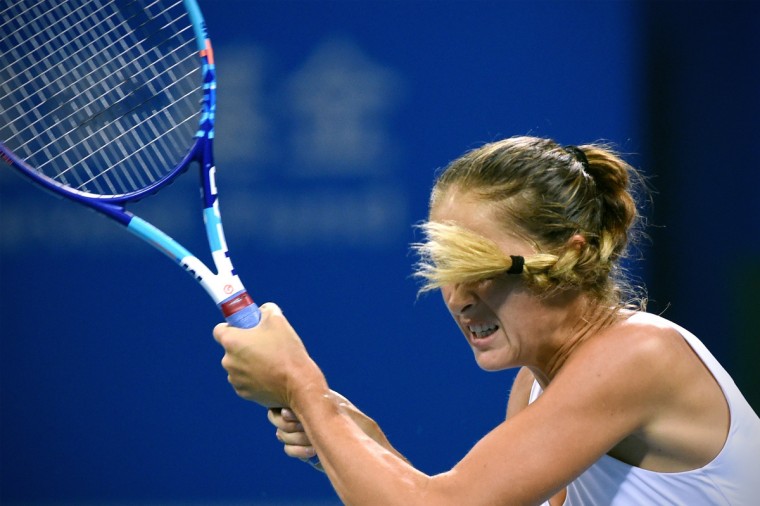 Bojana Jovanovski of Serbia hits a return against Caroline Wozniacki of Denmark during their women’s singles first round match at the China Open tennis tournament in Beijing. (Wang Zhao/AFP/Getty Images) 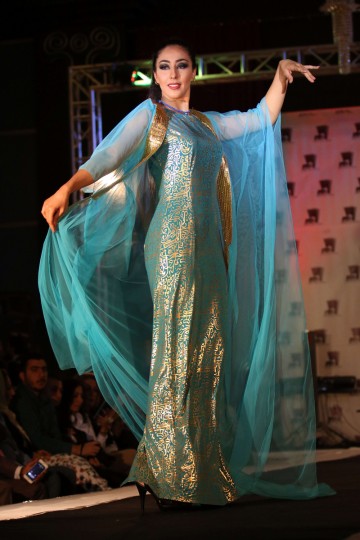 An Iraqi model presents a creation by a local designer during the Basra Fashion Night in the southern Iraqi city of Basra. (Haidar Mohammed Ali/AFP/Getty Images) 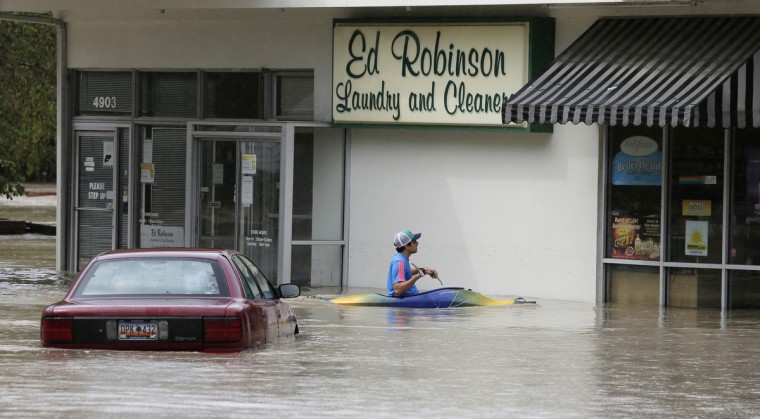 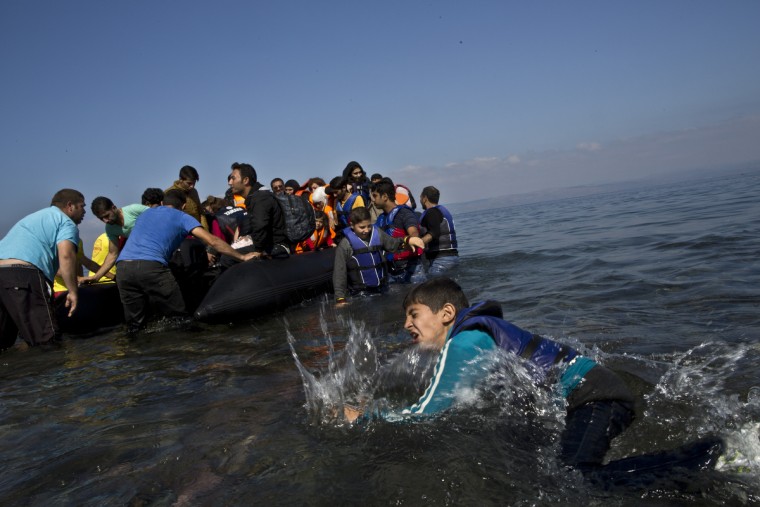 A boy falls into the water as he and other migrants arrive on a dinghy from the Turkish coast to the northeastern Greek island of Lesbos. The U.N. refugee agency is reporting a noticeable drop this week in arrivals of refugees by sea into Greece – as the total figure for the year nears the 400,000 mark. (Muhammed Muheisen/AP Photo) 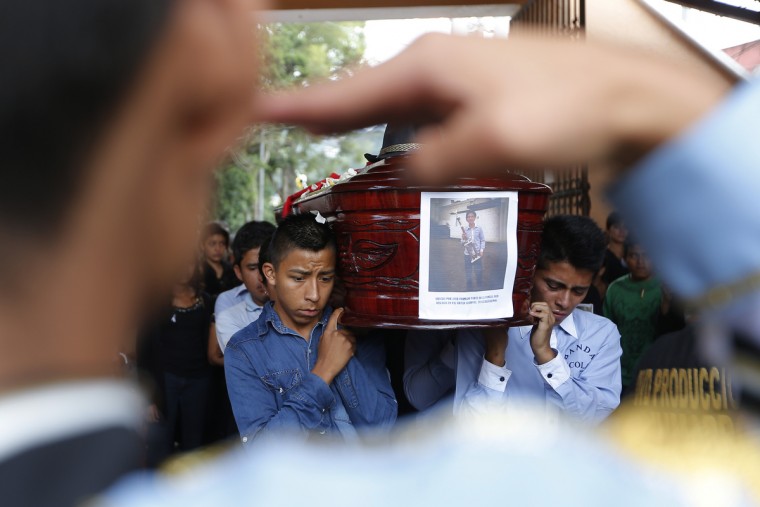 A student member of the school marching band makes a salute as classmate and fellow band member Bryan Sandoval who died in a mudslide, is carried to his final resting place in the Santa Catarina Pinula cemetery on the outskirts of Guatemala City. Hope faded Sunday for finding any survivors of a mudslide that killed at least 87 people as authorities said that hundreds more may still be missing. (Moises Castillo/AP Photo) 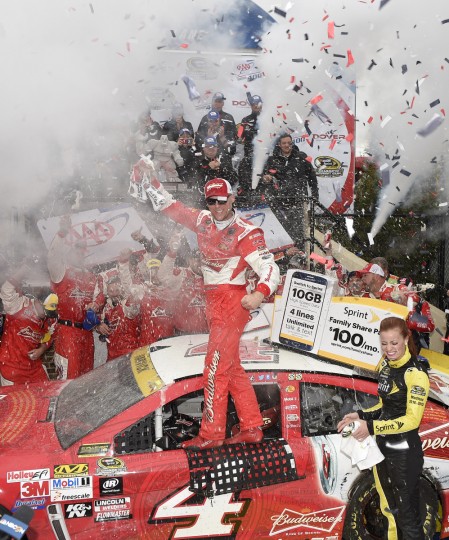 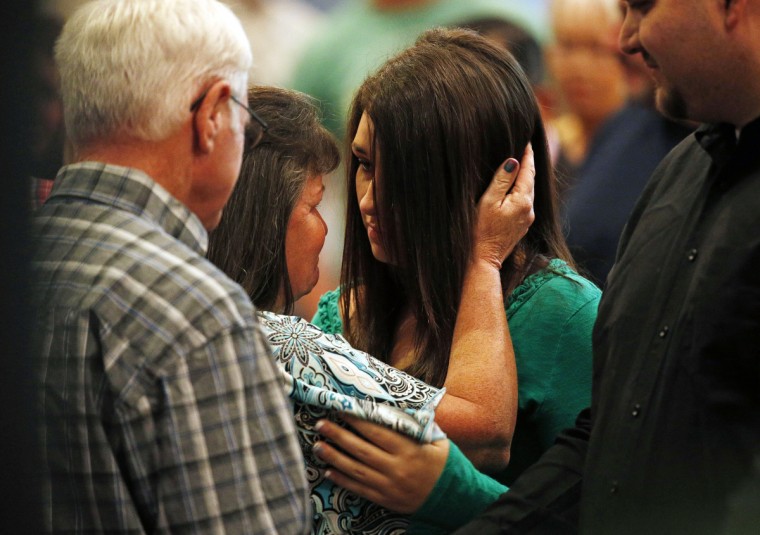 Lacey Scroggins, center right, is comforted during a church service at the New Beginnings Church of God, Sunday, Oct. 4, 2015, in Roseburg, Ore. Scroggins is a survivor of the shooting at Umpqua Community College. (John Locher/AP Photo)