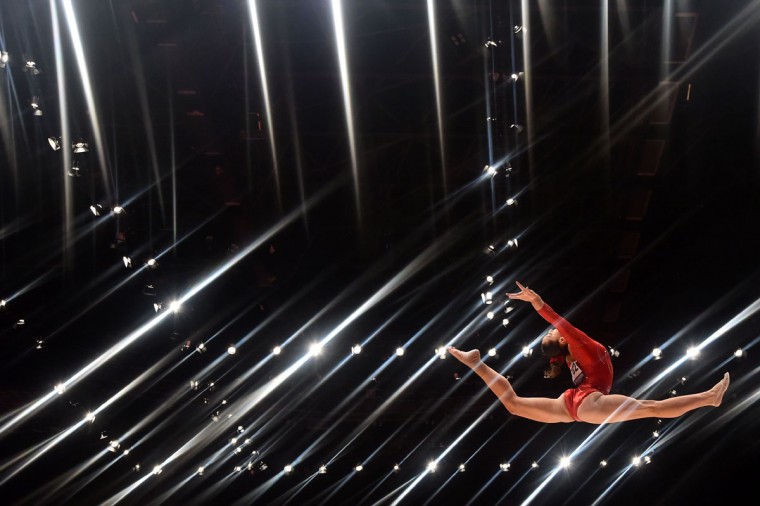 US gymnast Margaret Nichols competes on the beam during the Women’s Team event final on the fifth day of the 2015 World Gymnastics Championship in Glasgow, Scotland, on October 27, 2015. Gymnasts can secure qualification for the 2016 Rio Games at the championships which are being staged at the Hydro Arena. (AFP Photo/Ben Stansall) 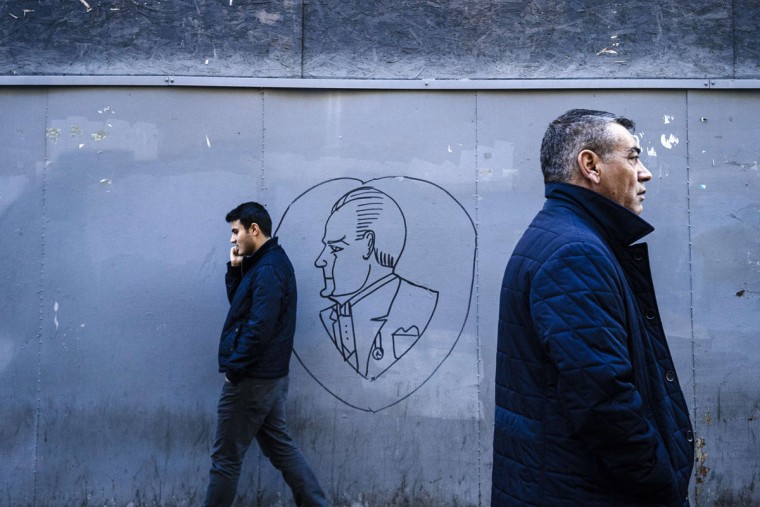 Men walk past a drawing on wall featuring the founder of the Turkish republic, Mustafa Kemal Ataturk in downtown Istanbul on October 28, 2015, a week ahead of the country’s general elections on November 1. The vote was called after the Justice and Development Party (AKP), indomitable for 13 years, lost its majority in a June election and then failed to form a power-sharing government. (AFP Photo/Dimitar Dilkoff) 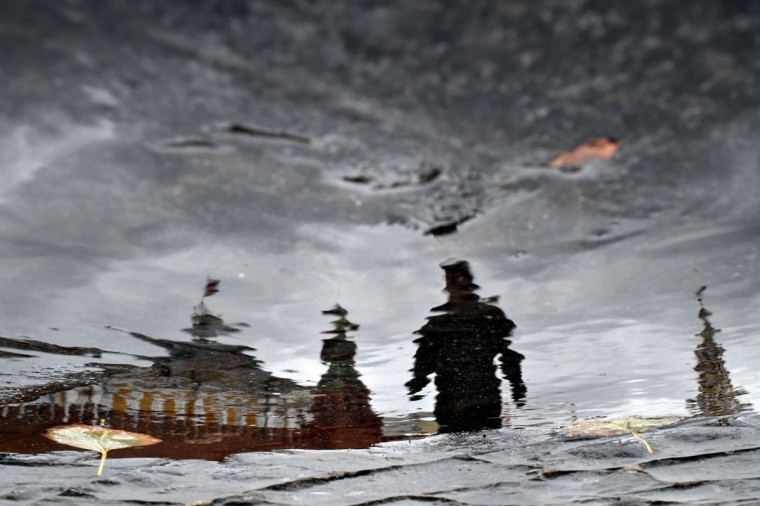 A man is reflected in a puddle as he walks across Moscow’s Red Square on October 28, 2015. (AFP Photo/Kirill Kudryavtsev) 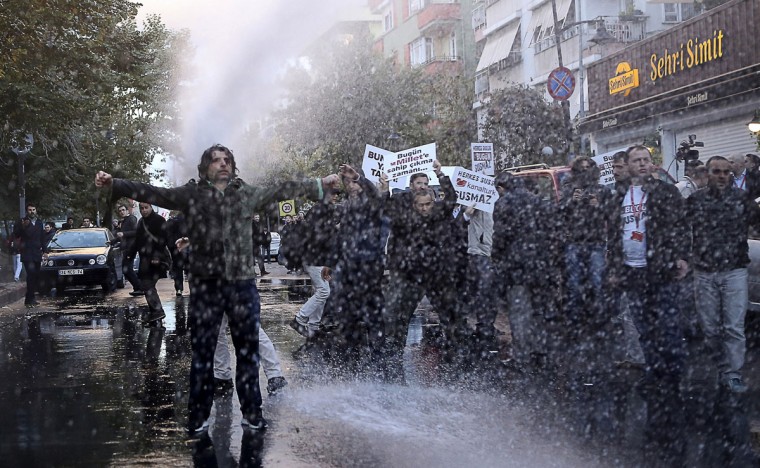 Turkish police use a water cannon to disperse supporters and employees of Bugun newspaper and Kanalturk television station during a protest in Istanbul on October 28, 2015 against the Turkish government’s crackdown on media outlets. Riot police firing tear gas and water cannon on October 28 stormed the Istanbul headquarters of a media group linked to President Recep Tayyip Erdogan’s bitter rival, on what was described as a dark day for democracy ahead of a pivotal election. Officers smashed through the gates of the media compound with chainsaws, according to images broadcast live on the group’s television stations, Bugun and Kanalturk. (AFP Photo/Usame Zaman) 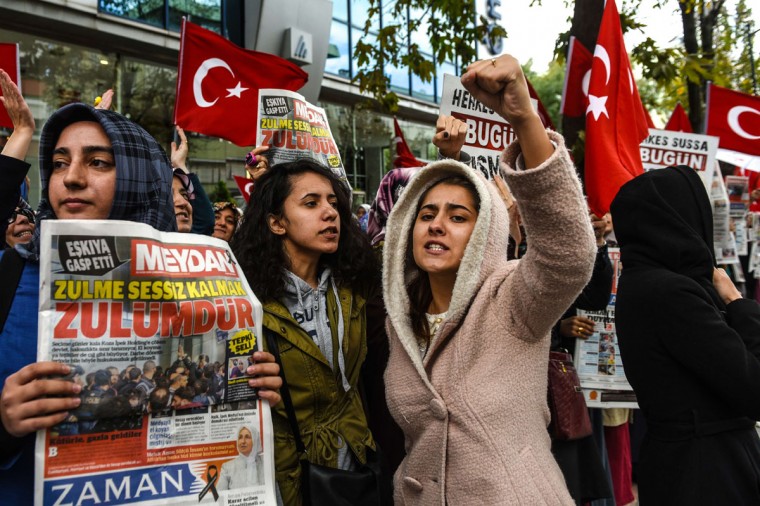 Turkish protesters shout slogans outside the headquarters of Bugun newspaper and Kanalturk television station in Istanbul during a demonstration against the Turkish government’s crackdown on media outlets on October 28, 2015. Riot police firing tear gas and water cannon stormed the Istanbul headquarters of a media group linked to President Recep Tayyip Erdogan’s bitter rival, on what was described as a dark day for democracy ahead of a pivotal election. The action triggered widespread concern about media freedom in Turkey, with critics accusing the government of trying to silence opponents of Erdogan’s Justice and Development Party (AKP) before the November 1 legislative vote. (AFP Photo/Ozan Kose) 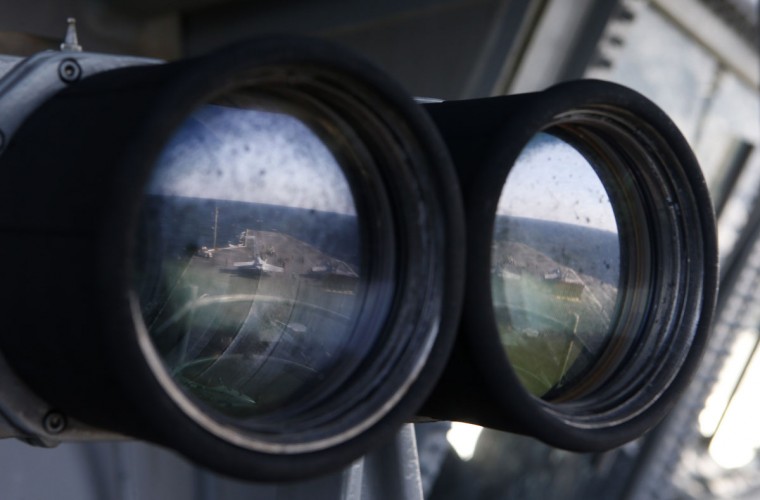 The deck of the USS Ronald Reagan, a Nimitz-class nuclear-powered aircraft carrier, is reflected in a pair of binoculars during a joint naval drill between South Korea and the US in the West Sea off South Korea on October 28, 2015. (AFP Photo / Hong-JiKim) 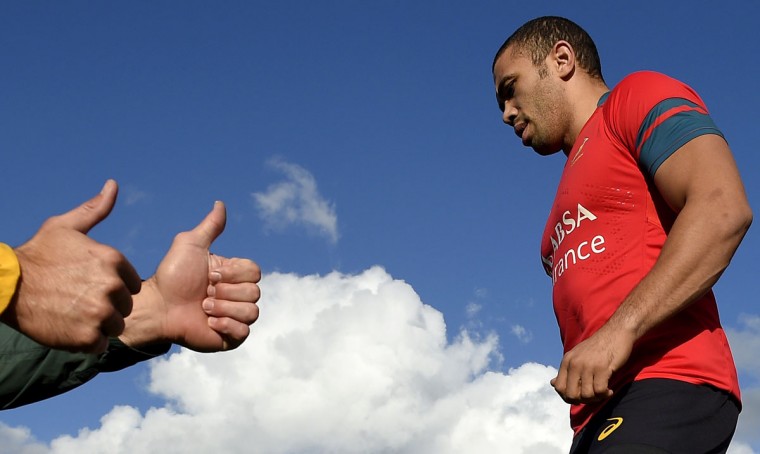 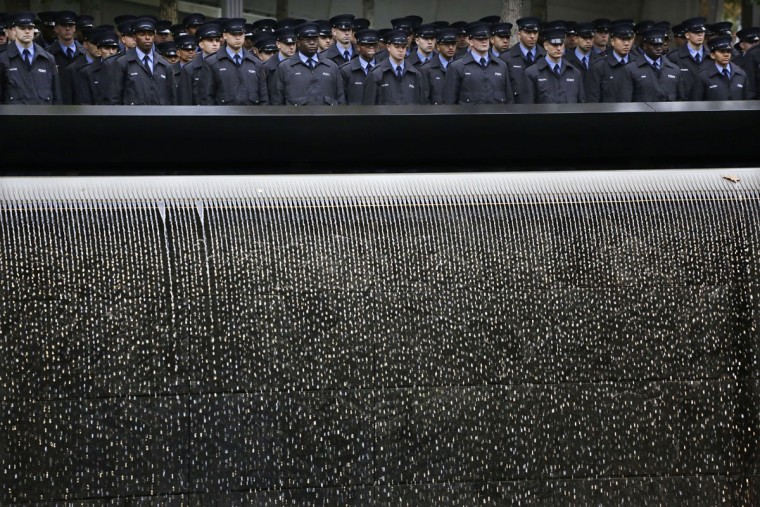 Probationary New York firefighters stand at attention at the Sept. 11 Memorial during a wreath laying ceremony, Wednesday, Oct. 28, 2015 in New York. The FDNYís 300 probationary firefighters participated in the ceremony to honor the fathers of two classmates who were killed in the attacks of Sept. 11, 2001. (AP Photo/Mark Lennihan) 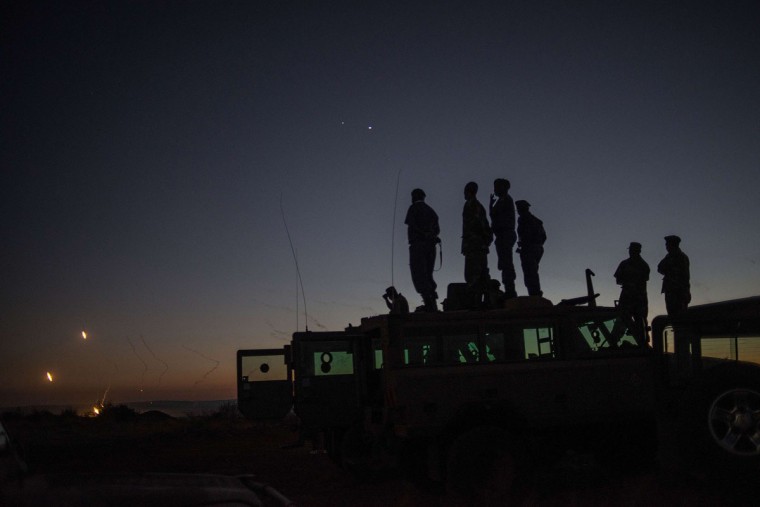 Soldiers and their equipment from different African countries take part in the AMANI AFRICA II, the first military exercise of the African Union’s much delayed African Standby Force, set up to quickly intervene in conflicts and crises, on October 28, 2015 at the South African Defence Force training camp in Lohatla. (AFP Photo/Mujahid Safodien) 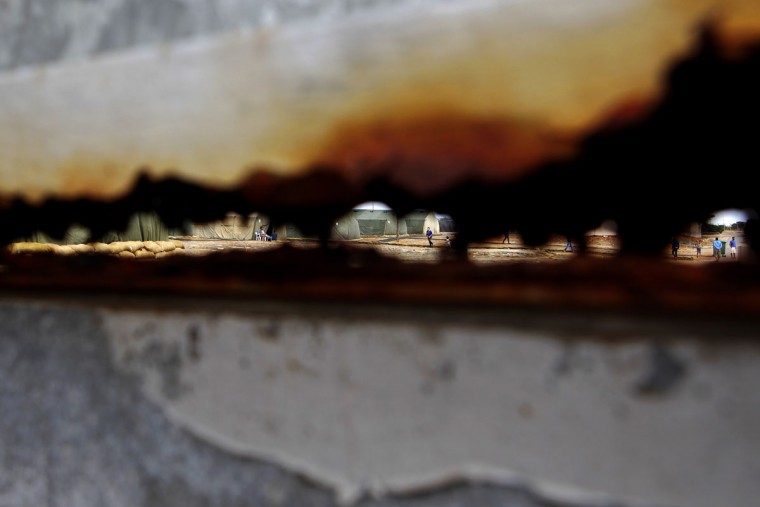 Migrants walk by the tents are seen through a hole of the rusty main gate at the temporary transit facility in Dhekelia Garrison, a British military base on the east Mediterranean island of Cyprus on Wednesday, Oct. 28, 2015. Bases authorities said 114 people whose fishing boats landed on the shore of another British base on Cyprus’ southern coast last week have been transferred to Dhekelia where they will be provided with “more suitable accommodation.” British authorities insist the bases, which are considered sovereign territory, will not become a new migrant route to the UK. (AP Photo/Petros Karadjias) 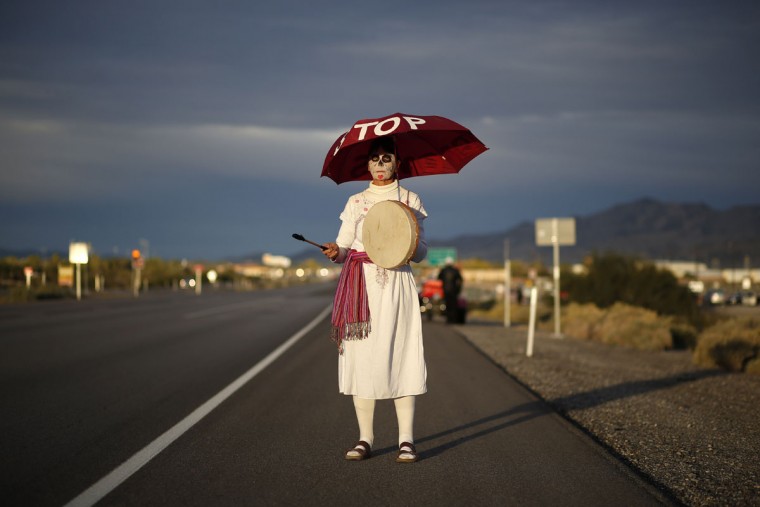 Toby Blome strikes a drum during a protest against drone warfare held at the entrance of Creech Air Force Base Wednesday, Oct. 28, 2015, in Indian Springs, Nev. Members of the group CodePink have been protesting at the base, where drone pilots operate, since Monday. (AP Photo/John Locher) 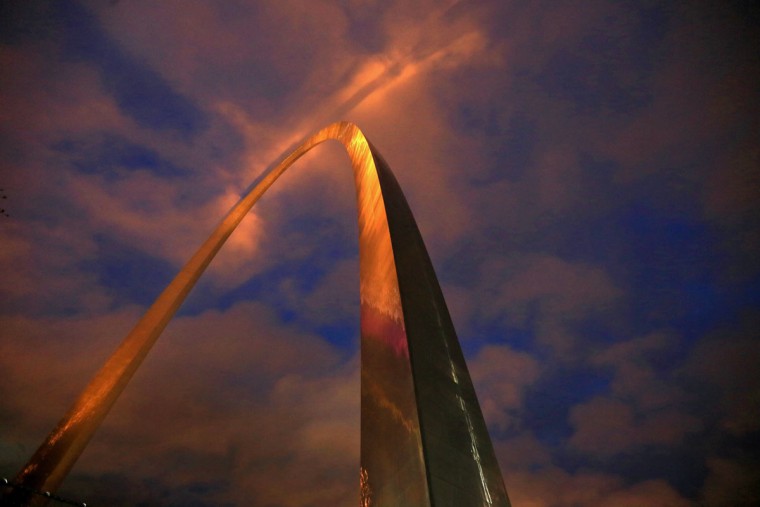 The Gateway Arch is lit with golden-colored lights just before sunrise, Wednesday, Oct. 28, 2015, in St. Louis. The city is celebrating the moment when the final piece of the 630-foot-tall structure was put into place on Oct. 28, 1965. (David Carson/St. Louis Post-Dispatch via AP) 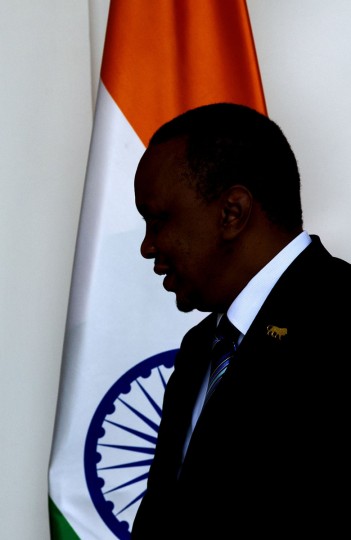 Kenyan President Uhuru Kenyatta arrives for a bilateral meeting on the sidelines of the India Africa Forum Summit in New Delhi, India, Wednesday, Oct. 28, 2015. More than 40 African leaders are in New Delhi for a summit, preceded by meetings of trade and foreign ministers from nearly all 54 African nations, to explore how Indian investment and technology can help a resurgent Africa face its development challenges. (AP Photo/Manish Swarup) 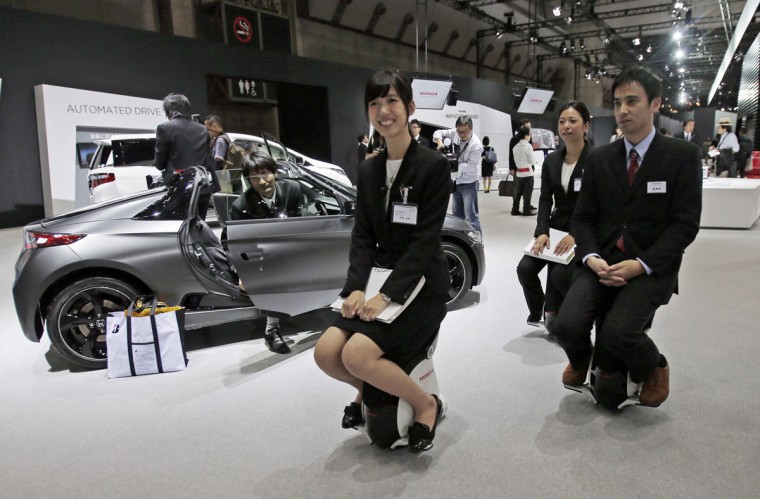 Honda Motor Co. employees ride on Honda UNI-CUB ﬂ through the Japanese automaker’s booth during the media preview of the Tokyo Motor Show in Tokyo Wednesday, Oct. 28, 2015. The biennial exhibition of vehicles in Japan runs for the public from Friday, Oct. 30. (AP Photo/Shuji Kajiyama) 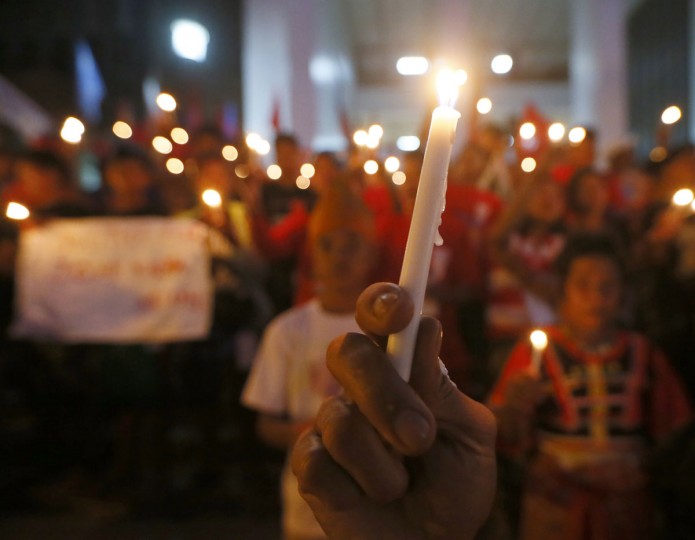 Students and indigenous peoples collectively known as “Lumads” hold lighted candles following their march around the University of the Philippines campus to denounce the recent killings of their leaders in southern Philippines Wednesday, Oct. 28, 2015 in suburban Quezon city, northeast of Manila, Philippines. The “Lumads,” who traveled to Manila by land and sea, are demanding the pullout of government forces as well as disband paramilitary groups from their ancestral lands in the south. (AP Photo/Bullit Marquez) 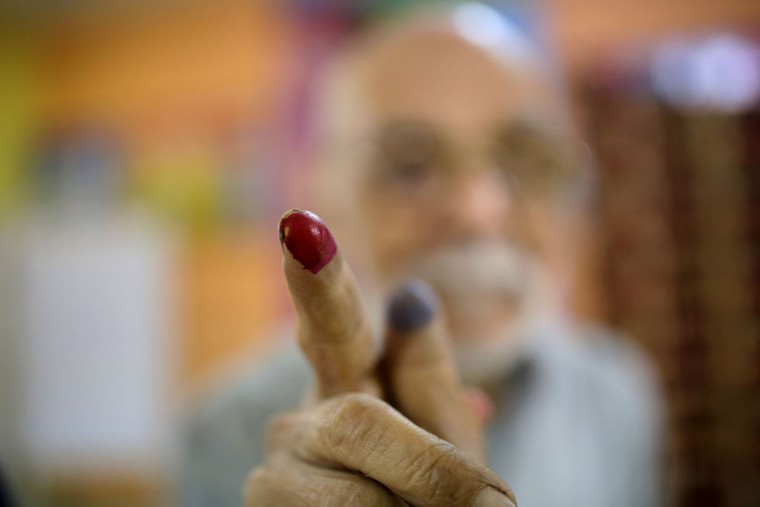 Egyptian voter Abdel Moneam Kandil, 80, shows his inked finger after he voted at a polling station of the runoff to the first round of the parliamentary elections in Giza, just outside of Cairo, Egypt, Wednesday, Oct. 28, 2015. (AP Photo/Amr Nabil) 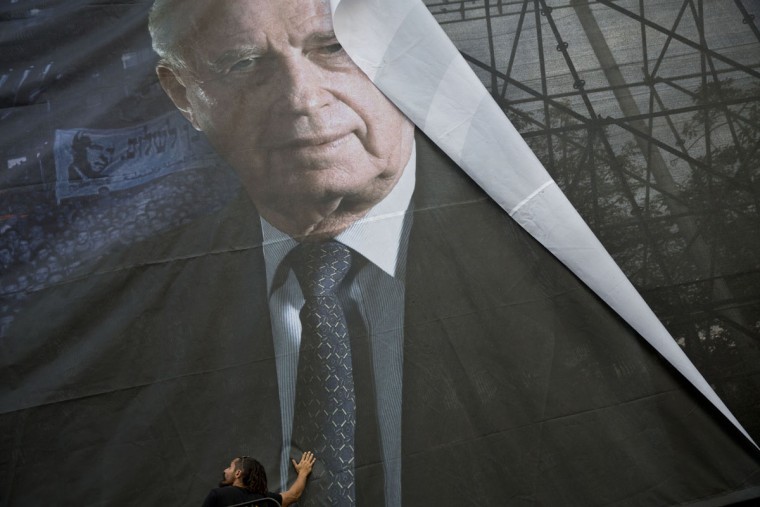 Israeli workers hang up a billboard with the portrait of late Israeli Prime Minister Yitzhak Rabin, ahead of a memorial rally for the 20th anniversary of his assassination at Rabin square in Tel Aviv, Israel, Wednesday, Oct. 28, 2015. In 1995, Rabin was assassinated by a right-wing Israeli minutes after attending a festive peace rally. (AP Photo/Oded Balilty) 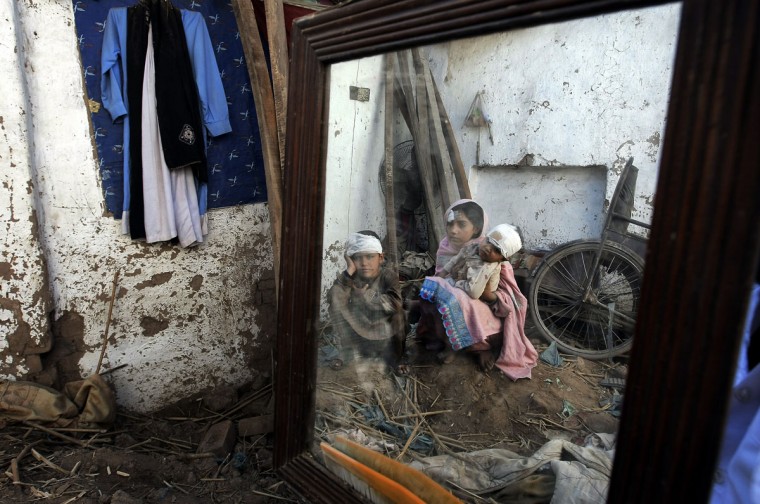 Pakistani children reflected in a mirror sit on the ground in their home damaged from an earthquake in Peshawar, Pakistan, Wednesday, Oct. 28, 2015. Afghanistan and Pakistan were scrambling Wednesday to rush aid to survivors of this week’s magnitude-7.5 earthquake as the region’s overall death toll from the temblor rose to hundreds. (AP Photo/Mohammad Sajjad) 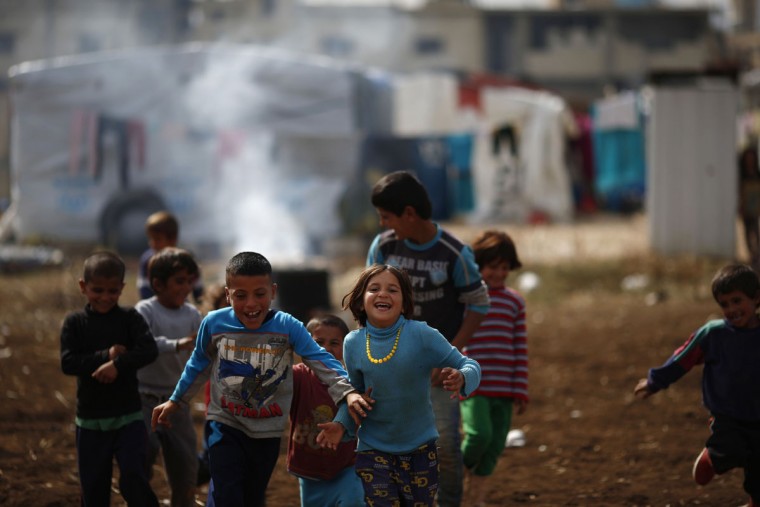 Syrian refugee boys play at a refugee camp in the town of Hosh Hareem, in the Bekaa valley, east Lebanon, Wednesday, Oct. 28, 2015. The United Nations said Tuesday the worsening conflict in Syria has left 13.5 million people in need of aid and some form of protection, including more than six million children. (AP Photo/Hassan Ammar) 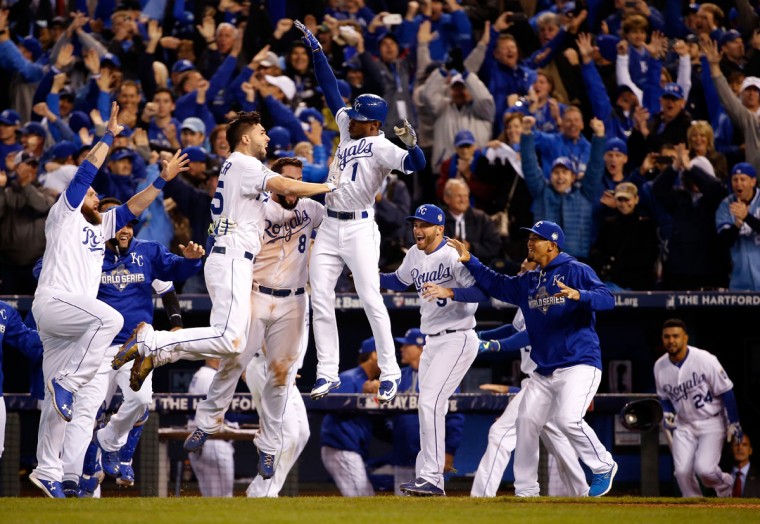 Eric Hosmer #35, Mike Moustakas #8 and Jarrod Dyson #1 of the Kansas City Royals celebrate the Royals 5-4 in 14 innings against the New York Mets during Game One of the 2015 World Series at Kauffman Stadium on October 27, 2015 in Kansas City, Missouri. (Photo by Sean M. Haffey/Getty Images)