PLANO, TEXAS — The wake-up call did not come with the cancer diagnosis. Or the double mastectomy.

Or news that cancer had spread to her lymph nodes.

For Noelle LeVeaux, it came 10 days before the first round of chemo. The dishwasher overflowed. Water seeped under the wood laminate floor. She loaded her two young daughters into the family car and left for the nail salon. They would escape reality for a while.

She drove her GMC Acadia down the road, through a red stoplight and into a Chevy Escalade. As airbags deployed and her SUV spun, she thought of how the stoplights seemed out of sequence. She looked at her daughters in the back seat.

In that moment, she realized how much she wanted to live. 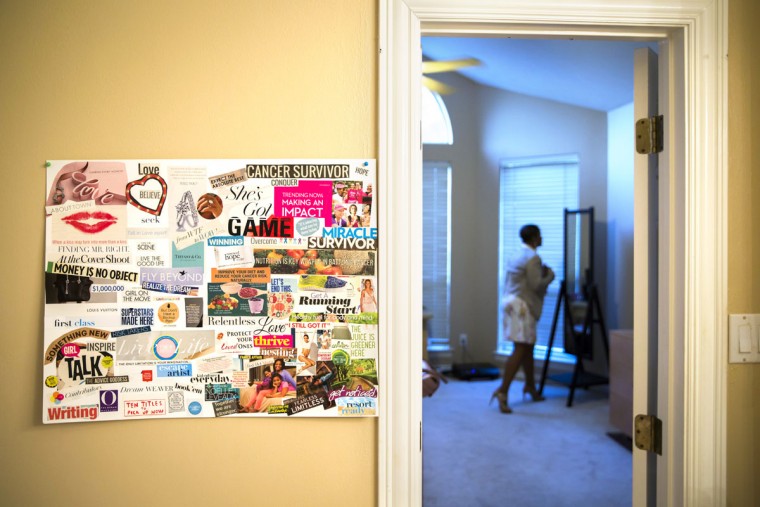 Breast cancer survivor Noelle LeVeaux prepares to leave the house, in Plano, Texas. A friend encouraged LeVeaux to make a “vision board” when she was diagnosed with breast cancer. The poster board, pasted with inspirational messages cut from magazines, hangs on the wall of the bathroom where LeVeaux gets ready for work. (Smiley N. Pool/The Dallas Morning News) 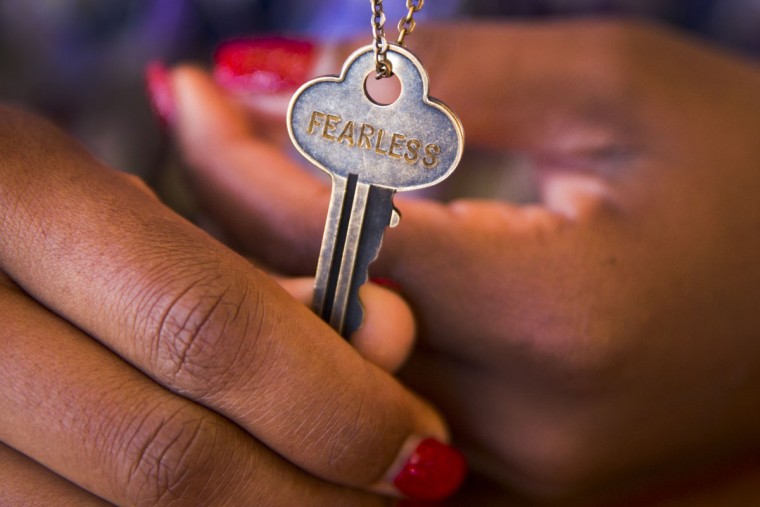 Noelle LeVeaux shows off a key with the word “Fearless” that she wears around her neck, in Richardson, Texas. She bought the necklace on a trip to Los Angeles. She will keep the necklace until she no longer needs its message, and then she’ll pass it on to someone who does. (Smiley N. Pool/The Dallas Morning News) 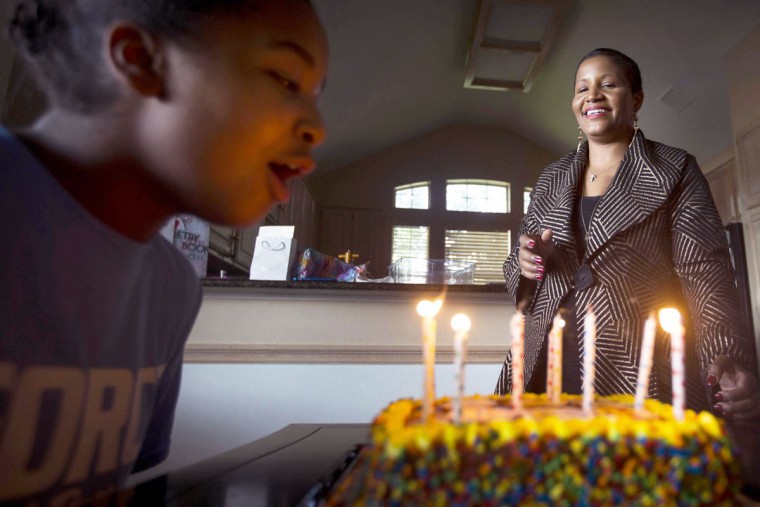 Noelle LeVeaux watches her daughter Sydney blow out the candles on her birthday cake as she turns 11, in Plano, Texas. “I admire my mom because she lives with courage and faith every day, even though she was diagnosed with breast cancer,” Sydney wrote about her mother in a school essay. (Smiley N. Pool/The Dallas Morning News) 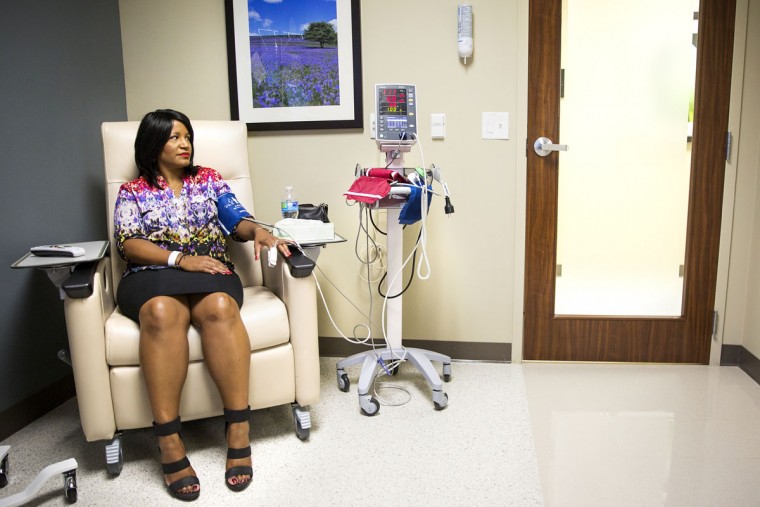 Breast cancer survivor Noelle LeVeaux waits in the exam room during a doctor visit, in Richardson, Texas. Now that she’s finished chemo and radiation, LeVeaux has started monthly vaccinations that shut down her ovaries and stave off hormones that can contribute to cancer. She’ll get the shot for the next five years. (Smiley N. Pool/The Dallas Morning News) 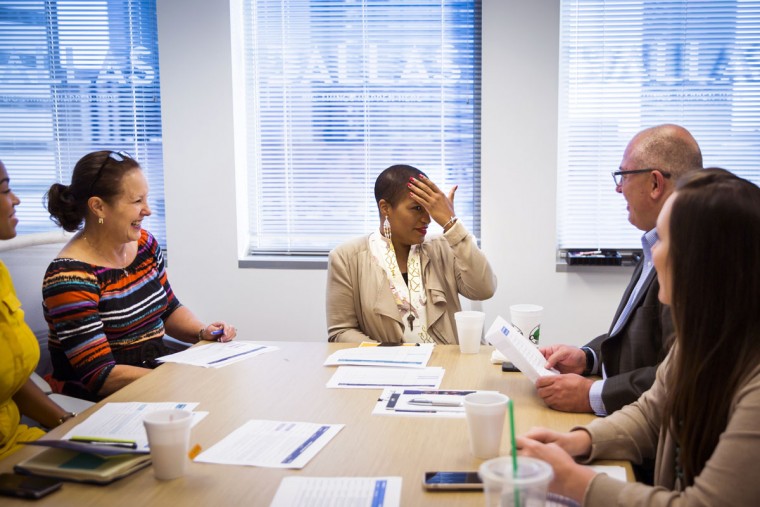 On her first day to go out in public without a wig, breast cancer survivor Noelle LeVeaux, center, shows off her real hair as she sits down for a meeting with her staff at the Dallas Convention & Visitors Bureau, in Dallas. “Can you believe it? I have hair!” she told them. (Smiley N. Pool/The Dallas Morning News) 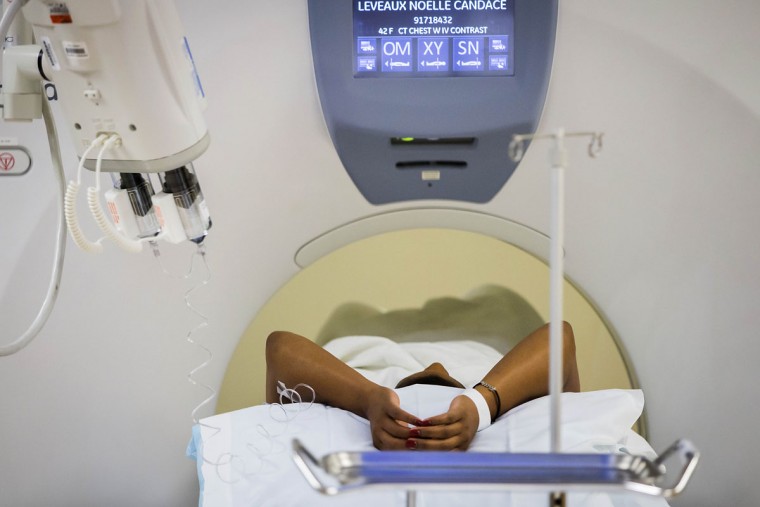 Noelle LeVeaux has a CT scan performed at UT Southwestern Clinical Center at Richardson/Plano in Richardson, Texas. “The new normal with cancer, everything is about recurrence,” LeVeaux says. “I mean, you get a cough and then you are worried about that spot lung and now you’ve got a CT scan scheduled.” (Smiley N. Pool/The Dallas Morning News via AP) 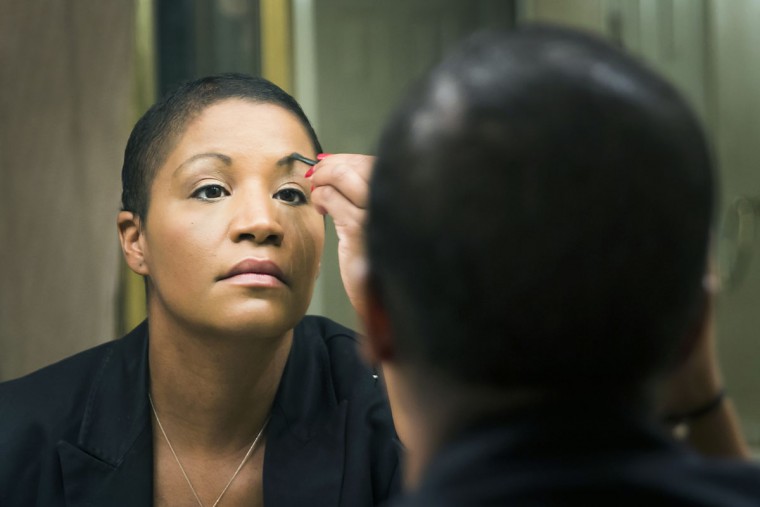 Noelle LeVeaux applies makeup as she gets ready for work, in Plano, Texas. LeVeaux lost her hair and her eyebrows during chemo. She learned to draw on her eyebrows with makeup and bought a bunch of wigs on a shopping trip with her sister. Her hair is growing back and her eyebrows are starting to fill in. (Smiley N. Pool/The Dallas Morning News via AP) 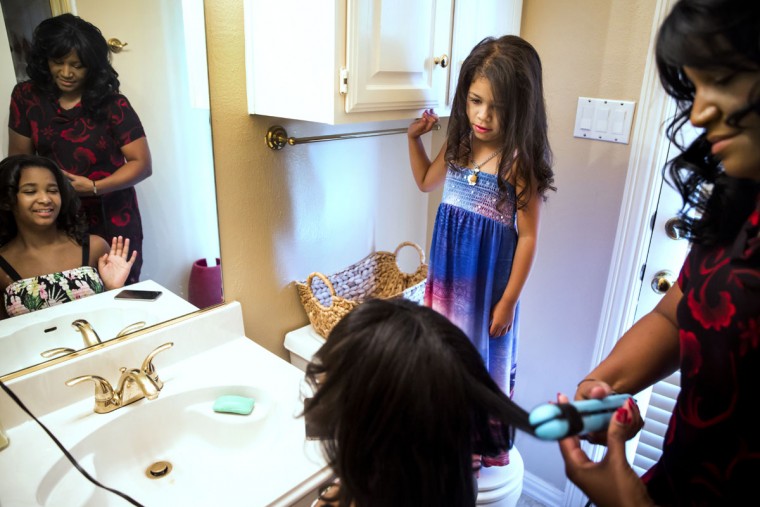 Before leaving for church, Noelle LeVeaux styles hair for her daughter Sydney as her youngest daughter, Jordan, looks on, in Plano, Texas. LeVeaux says cancer taught her to appreciate the girls more and stop projecting her insecurities on them. (Smiley N. Pool/The Dallas Morning News) 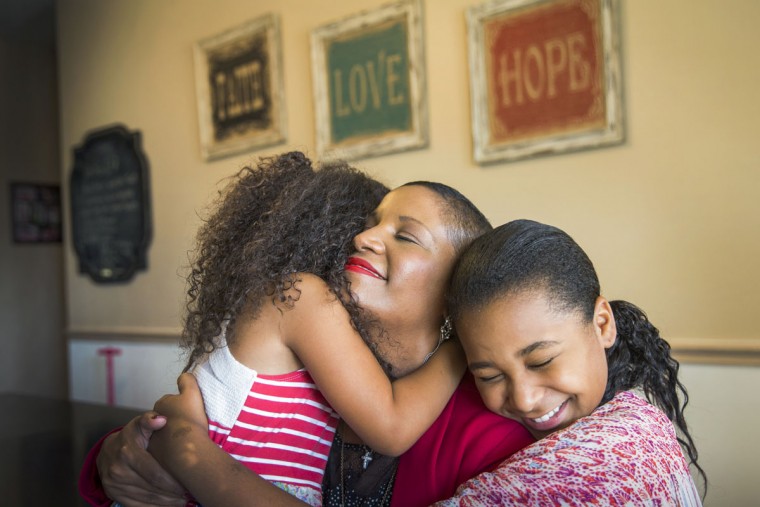 Breast cancer survivor Noelle LeVeaux, center, snuggles at home with her daughters Jordan, left, and Sydney, in Plano, Texas. LeVeaux’s breast cancer diagnosis had a ripple effect on daughters Jordan, 7, and Sydney, 11. During cancer treatment, Sydney tucked her in at bedtime and left water on her nightstand. Jordan asked if cancer was contagious. (Smiley N. Pool/The Dallas Morning News via AP)

LeVeaux, 42, of Plano, was diagnosed with breast cancer in December. She learned to juggle three jobs: marketing executive at the Dallas Convention & Visitors Bureau, single mom of two girls and manager of her own health.

During cancer treatment, she discovered she could not shield her daughters, sisters, friends and ex-husband from the consequences of her diagnosis. Like a stone thrown in a pond, her illness had a ripple effect on the loved ones in her life.

She missed parent-teacher nights, school plays and choir performances. She wore a mask at the office and posted a sign on her door, warning co-workers not to touch her.

At bedtime, her 11-year-old daughter, Sydney, tucked her in and left water on the nightstand.

Her ex-husband Mike Dugan flew from New Mexico to attend all of Sydney’s volleyball games. He took care of the girls each time LeVeaux went through chemo.

One time, when LeVeaux woke up sick in the middle of the night, her sister, Christine LeVeaux-Haley, brought her crackers, rubbed her back and put a wet towel on her head.

LeVeaux lay on the cool bathroom tiles, next to the toilet. Her sister sat beside her.

LeVeaux has gone through four rounds of chemo, lost her hair, gotten radiation treatment and awakened to life after cancer.

Her chest, burned by the radiation, is healing, and her hair is growing back. She will have reconstructive surgery in a few months.

Now, she goes for monthly injections that shut down her ovaries and stave off hormones that could contribute to cancer. She gets queasy thinking about gingersnaps or raspberry sorbet Popsicles, snacks that calmed her stomach during chemo.

She knows how to draw on her eyebrows, which she lost along with her long, black hair.

Cancer put parts of her life on hold.

LeVeaux could not play her usual role: advice giver, caretaker and social planner.

Last December, she didn’t have strength to take down the Christmas tree. At the end of the holiday season, a friend took the tree, still decorated with ornaments, wrapped it in plastic and stuck it in the garage.

On a plane ride, she noticed an attractive man, but she wondered if she looked weird. “He’s hot,” she thought. Then: “Oh, my gosh, I have no eyebrows.”

On a recent morning, LeVeaux twirled her daughter Jordan’s hair into curls for school picture day. She left two wigs on her bedroom dresser and prepared to debut a new hairstyle: short, black and newly grown-in.

Sydney and Jordan, 7, ate toast and eggs in the kitchen, near a poster-board calendar labeled “Journey 2 All Clear.” During treatment, Jordan took turns crossing off the days in purple marker.

On the calendar, they taped slips of paper from two fortune cookies. “This is a good time for you to take a risk. You will succeed.” And: “Remember three months from this date! Your lucky star is shining.”

Jordan drew hearts on some of the days.

Before leaving home for school and work, LeVeaux looked into the bathroom mirror and drew on eyebrows.

Jordan bounced a volleyball in the bathroom. She told her mom to put on a wig. “People are going to say, ‘Why are you bald?'” she said.

LeVeaux looked at her reflection in the floor-length mirror, rubbed her hair and adjusted her earrings.

Sydney hugged her. “You smell good. Now, I’ve got that smell all over me.”

When LeVeaux arrived at the office, colleagues complimented her hair. Then, they quickly fell back into routine in the office conference room.

In the spring, LeVeaux started writing about what cancer had taught her. In blog posts titled “Confessions of a Single Mom with Cancer,” she criticized some of the ways she’d lived before the diagnosis.

She would now focus more on her health than her dress size. She would inspire her daughters to love learning by visiting parks and museums with them over the summer.

She would stop projecting her insecurities on them — and she’d accept that sometimes, she would disappoint them.

In some of her posts, she asked family and friends to keep her from returning to old habits.

In the weeks after finishing chemo, LeVeaux found a wrapped gift box in her office, some swag from a company. Inside, she found a coffee mug with a message: “Best Day Ever.”

She uses it every day.