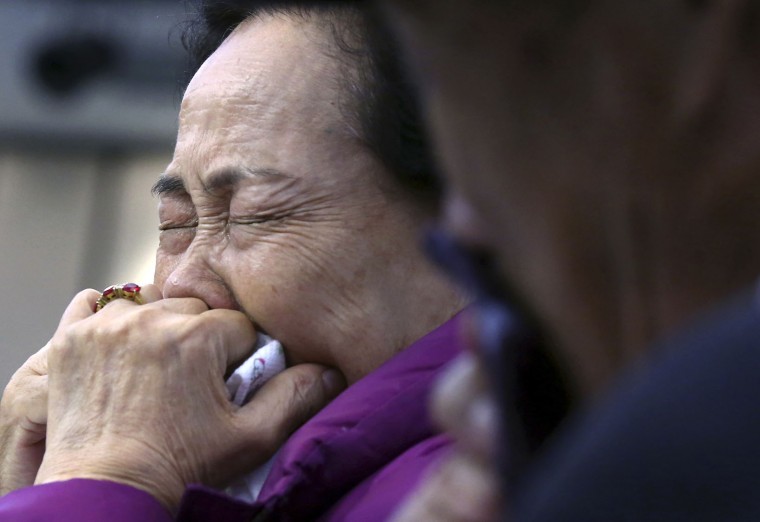 South Korean Mun Jung-ok cries as she bids farewell to her North Korean relative after the Separated Family Reunion Meeting at the Diamond Mountain resort in North Korea, Thursday, Oct. 22, 2015. Hundreds of elderly Koreans are weeping and embracing as they part – perhaps for good – after briefly reuniting for the first time in more than 60 years. About 390 South Koreans traveled to the North’s scenic Diamond mountain resort earlier this week to meet for three days with relatives they were separated from during the turmoil of the 1950-53 Korean War. (Kim Do-hoon/Yonhap via AP) 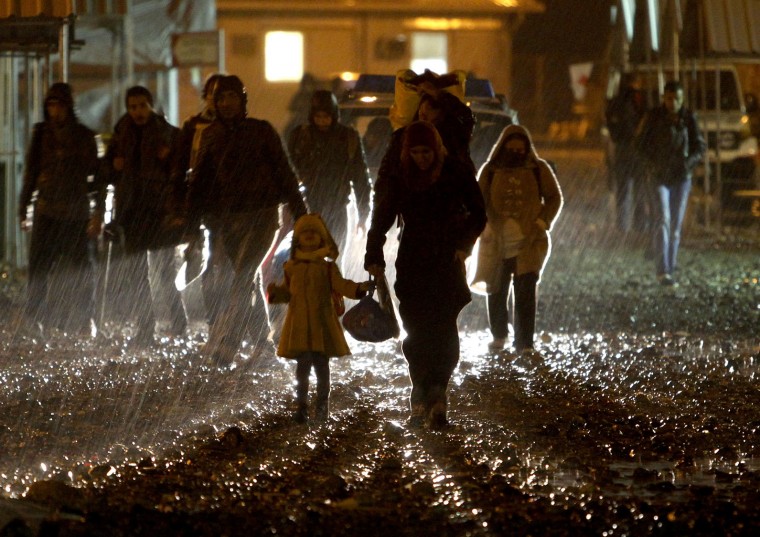 Migrants and refugees arrive in the rain at the transit camp for refugees near the southern Macedonian town of Gevgelija, after crossing the border from Greece, early Thursday, Oct. 22, 2015, as migrants make their way across Europe by the tens of thousands, fleeing war or seeking a better life. A U.N. refugee agency field officer says a large number of families with small children have been among the thousands of migrants and it is a tendency seen over the last couple of weeks. (AP Photo/Boris Grdanoski) 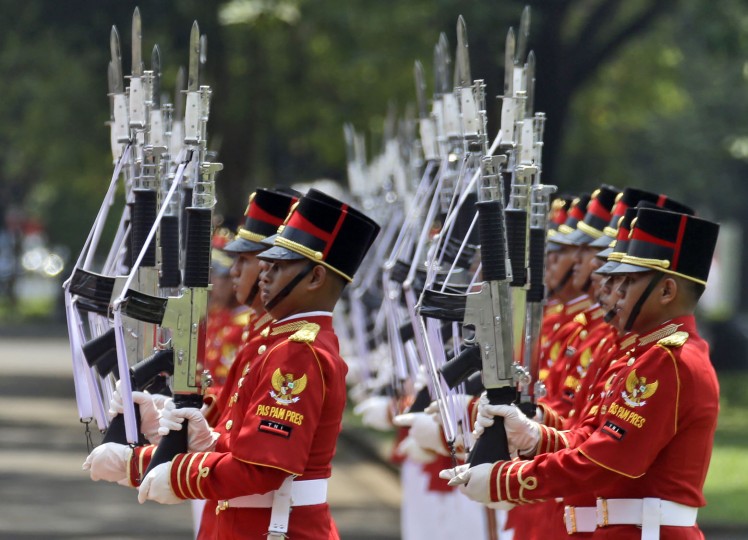 Military honor guards perform a salute during a welcoming ceremony for Denmark’s Queen Margrethe II and Prince Henrik at Merdeka Palace in Jakarta, Indonesia, Thursday, Oct. 22, 2015. The Danish royal couple is currently on a five-day state visit in the country. (AP Photo/Achmad Ibrahim) 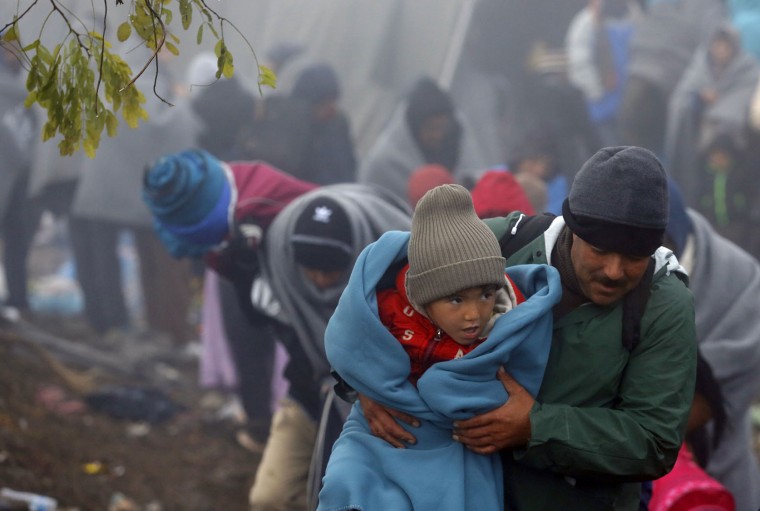 A migrant carries a child on the field near the village of Berkasovo, Serbia, Thursday, Oct. 22, 2015. Many migrants from the Middle East, Asia and Africa expressed bewilderment and disappointment because they had been told as they began their journeys in Turkey that the hard part would end once they reached EU countries like Croatia and Slovenia. (AP Photo/Darko Vojinovic) 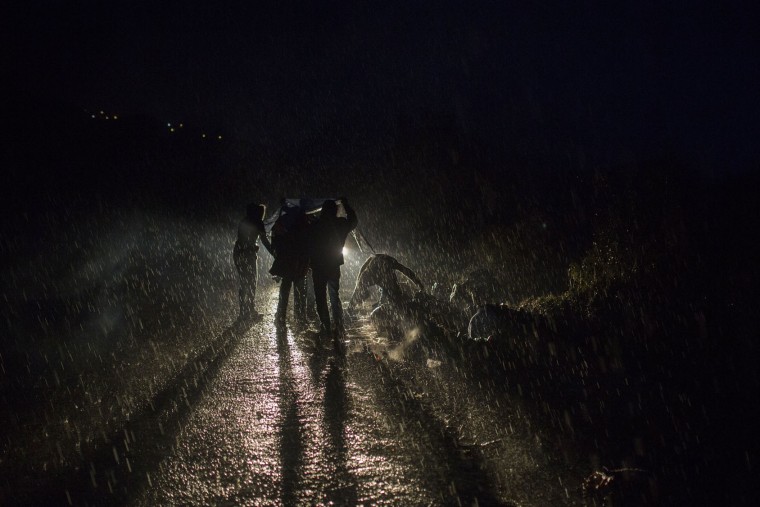 Refugees wait under the rain for a bus, transferring them to a processing center, in Skala Sikaminias village, on the northeastern Greek island of Lesbos, early Thursday, Oct. 22, 2015. Greece is the main entry point for those fleeing violence at home and seeking a better life in the European Union. More than 500,000 people have arrived so far this year on Greece’s eastern islands, paying smugglers to ferry them across from nearby Turkey. (AP Photo/Santi Palacios) 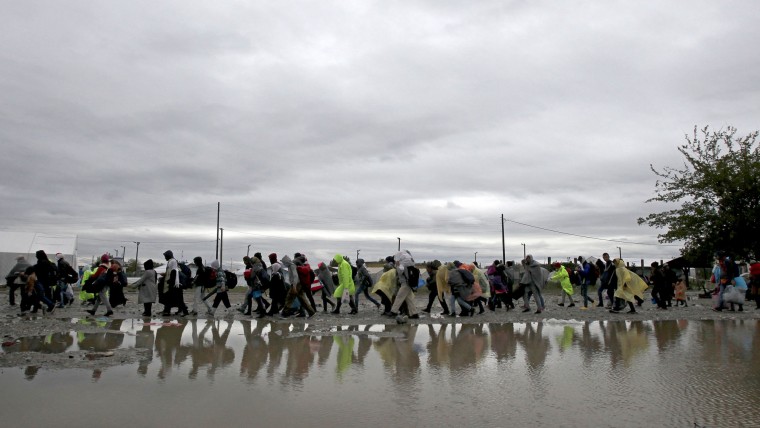 Migrants and refugees walk in the rain and cold towards the transit camp for refugees, just after crossing the border from Greece near the southern Macedonian town of Gevgelija, on Thursday, Oct. 22, 2015, as migrants make their way across Europe by the tens of thousands, fleeing war or seeking a better life. A U.N. refugee agency field officer says a large number of families with small children have been among the thousands of migrants and it is a tendency seen over the last couple of weeks. (AP Photo/Boris Grdanoski) 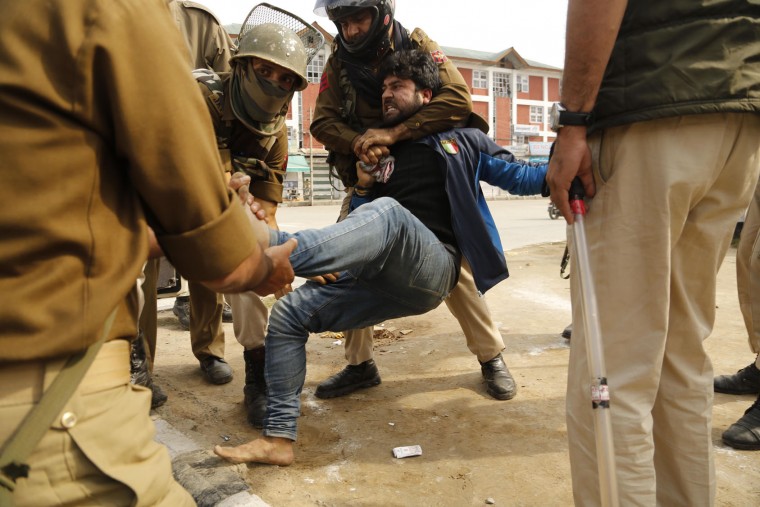 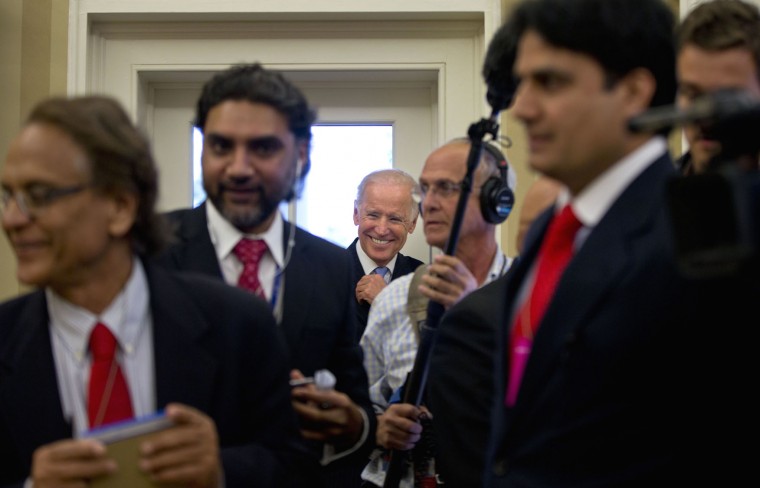 Vice President Joe Biden, center, smiles as watches from the back of the Oval Office of the White House in Washington, Thursday, Oct. 22, 2015, during a meeting between President Barack Obama and Pakistani Prime Minister Nawaz Sharif. On Wednesday, Biden announced that he would not run for the presidential nomination. (AP Photo/Pablo Martinez Monsivais) 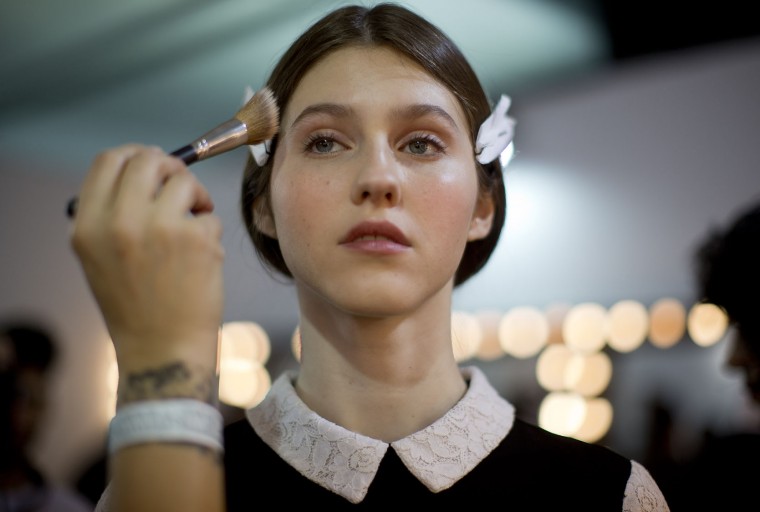 A model has her makeup done backstage before the start of the Gloria Coelho winter 2016 collection during Sao Paulo Fashion Week in Sao Paulo, Brazil, Thursday, Oct. 22, 2015. (AP Photo/Andre Penner) 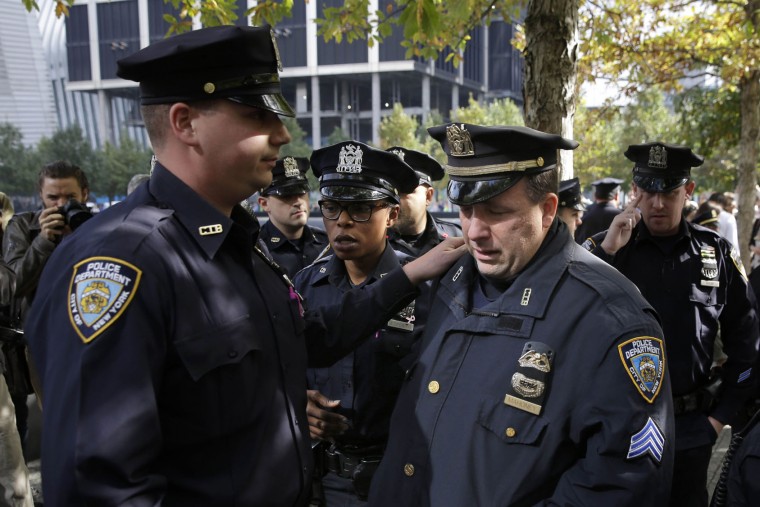 A police officer cries after laying flowers in memory of Officer Randolph Holder at the 9/11 Memorial in New York, Thursday, Oct. 22, 2015. Tyrone Howard is charged with first-degree murder and robbery, accused of stealing a bike and fatally shooting Holder in the head after a chase Tuesday night. (AP Photo/Seth Wenig) 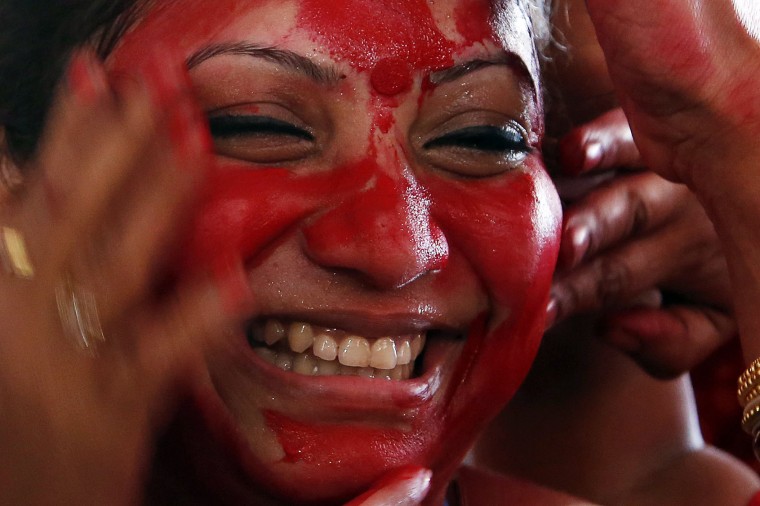 An Indian woman smiles as others apply vermillion paste on her face during celebrations marking Durga Puja festival in Mumbai, India, Thursday, Oct. 22, 2015. The festival commemorates the slaying of a demon king by lion-riding, 10-armed goddess Durga, marking the triumph of good over evil. (AP Photo/Rajanish Kakade) 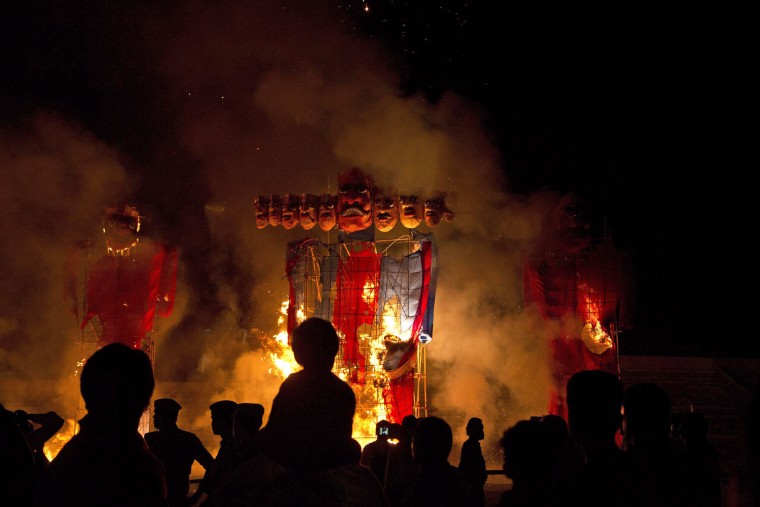 People watch effigies of the ten-headed demon king Ravana go up in flames during Dussehra celebrations in Gauhati, India , Thursday, Oct. 22, 2015. Dussehra festival commemorates the victory of Hindu god Rama over Ravana. The burning of effigies of Ravana, signifying the victory of good over evil, brings the festivities to a close. (AP Photo/ Anupam Nath) 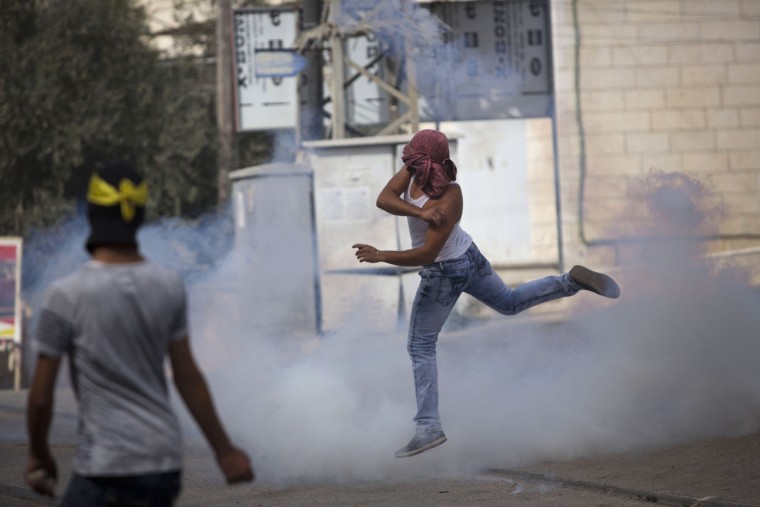 A Palestinian protester throws back a tear gas canister that was fired by Israeli troops during clashes, in the West Bank town of al-Ram, north of Jerusalem, Thursday, Oct. 22, 2015. Ten Israelis have been killed over the last month, mainly in stabbing attacks. On the Palestinian side, 48 people have been killed. The violence erupted a month ago, fueled by rumors that Israel was plotting to take over a sensitive Jerusalem holy site revered by both Jews and Muslims. (AP Photo/Majdi Mohammed) 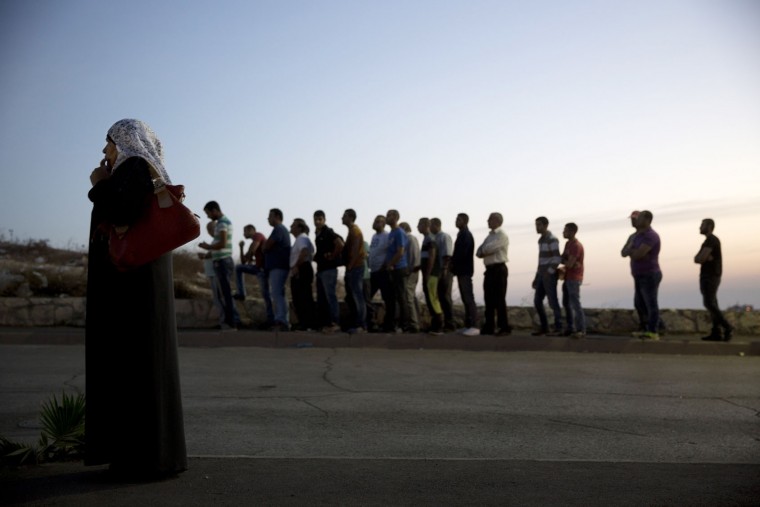 Palestinians wait in line to cross an Israeli police checkpoint as they exit the Arab neighborhood of Issawiyeh in Jerusalem, Thursday, Oct. 22, 2015. Israel has beefed up security across the country, sending hundreds of soldiers to back up thousands of police officers. Police have erected concrete barriers and checkpoints at the entrance to Arab areas of east Jerusalem, where many of the attackers are from. (AP Photo/Oded Balilty) 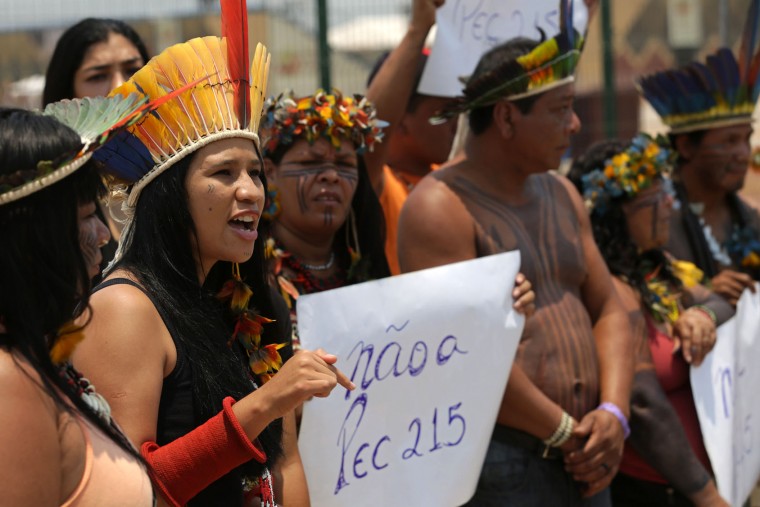 Karaja indigenous woman Narube Werreria protests the World Indigenous Games outside the arena in Palmas, Brazil, Thursday, Oct. 22, 2015. Protesters denounced what they said was poor organization and unnecessary multi-million dollar spending on the games, saying the money would be better spent on improving the conditions of Brazil’s impoverished indigenous peoples. (AP Photo/Eraldo Peres) 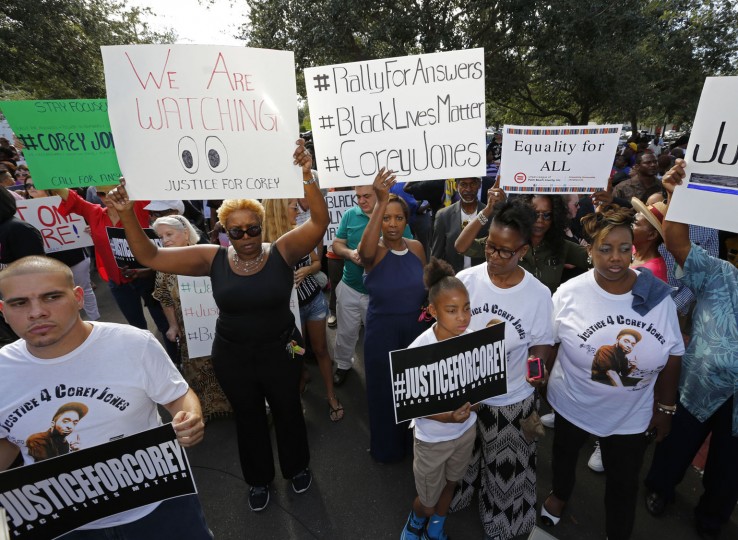 Attendees hold signs in support of Corey Jones at a ‘rally for answers’ on Thursday, Oct. 22, 2015, in Palm Beach Gardens, Fla. Jones was fatally shot by a South Florida police officer(AP Photo/Joe Skipper) 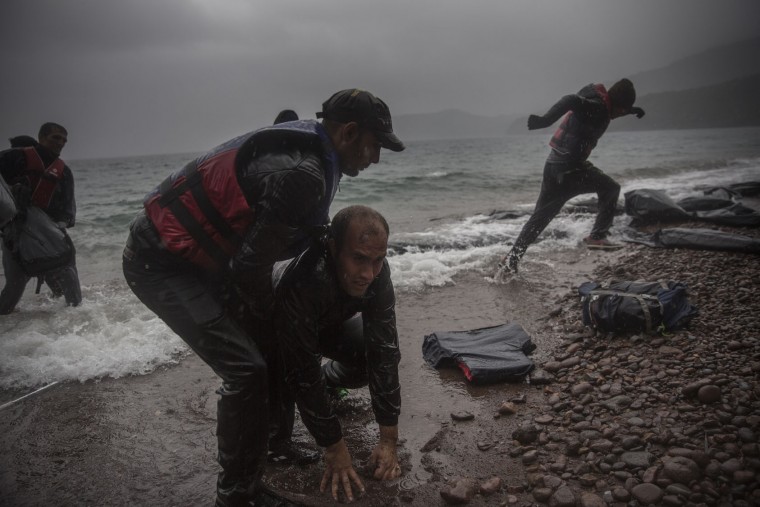 Migrants disembark on a beach after arriving on a dinghy from the Turkish coast to Skala Sikaminias village on the northeastern Greek island of Lesbos, Thursday, Oct. 22, 2015. Greece is the main entry point for those fleeing violence at home and seeking a better life in the European Union. More than 500,000 people have arrived so far this year on Greece’s eastern islands, paying smugglers to ferry them across from nearby Turkey. (AP Photo/Santi Palacios) 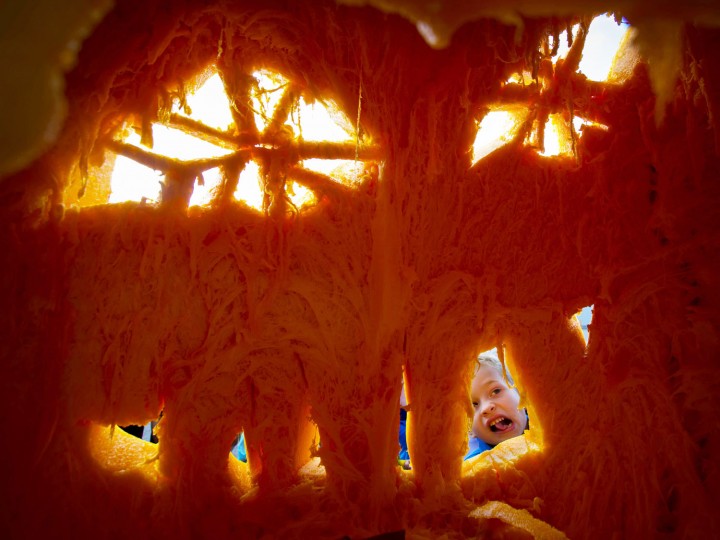 Kyle McDowell, a kindergarten student at O’Hara Catholic School, emulates the face of a Jack O’Lantern created from a 800 pound pumpkin by carver Scott Cully in Eugene, Ore., according to the Register-Guard on Thursday, Oct. 22, 2015. (Andy Nelson/The Register-Guard via AP) 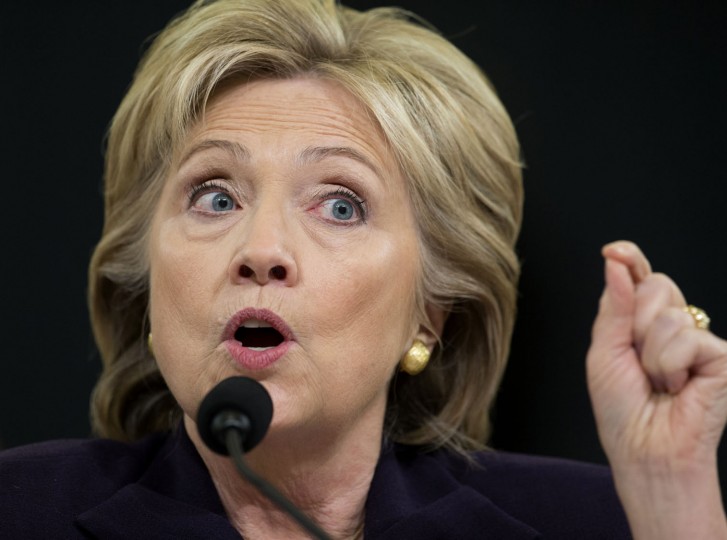