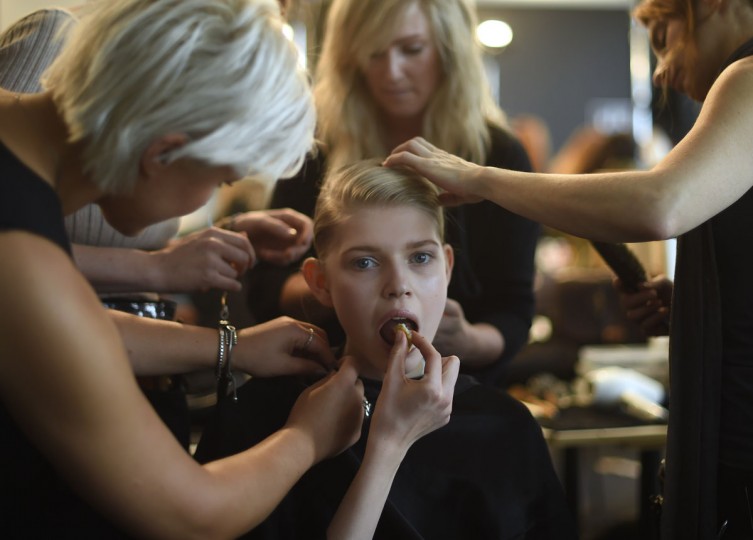 A model eats as she gets ready backstage before the show for fashion house Etro during the women Spring / Summer 2016 Milan’s Fashion Week on September 25, 2015 in Milan. (AFP Photo/Olivier Morin) 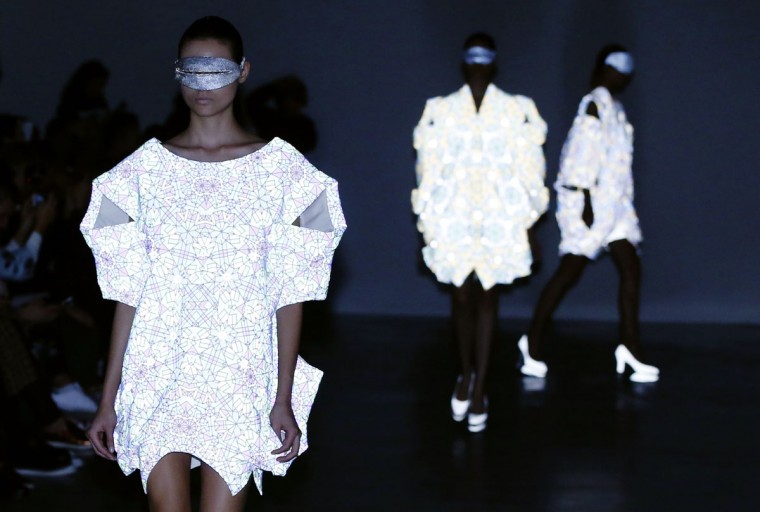 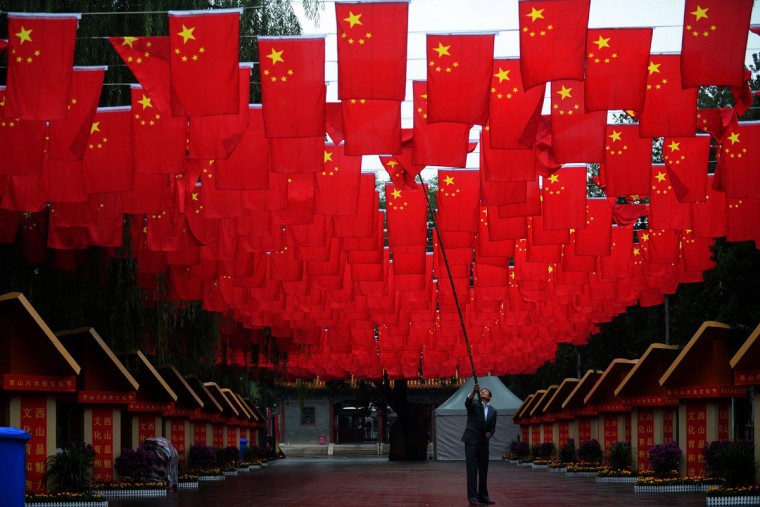 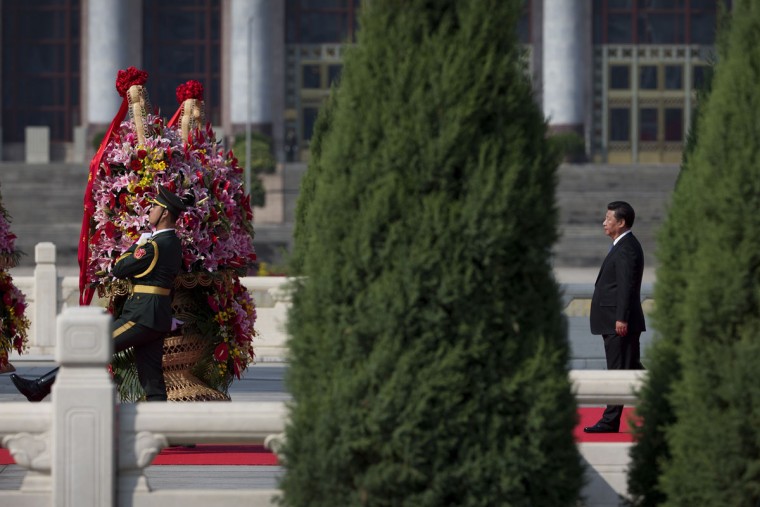 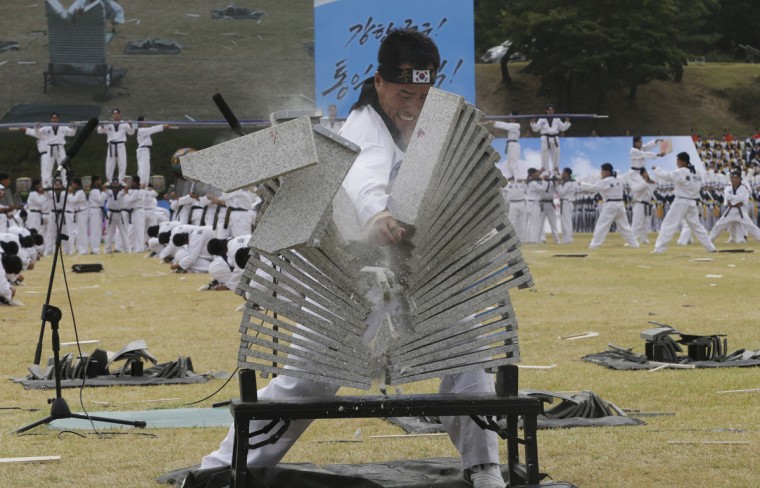 A soldier from the South Korean army special forces breaks stone plates with his hand during a rehearsal for the 67th anniversary of Armed Forces Day at the Gyeryong military headquarters in Gyeryong, South Korea, Wednesday, Sept. 30, 2015. South Korea will celebrate the 67th Armed Forces Day on Oct. 1. (AP Photo/Ahn Young-joon) 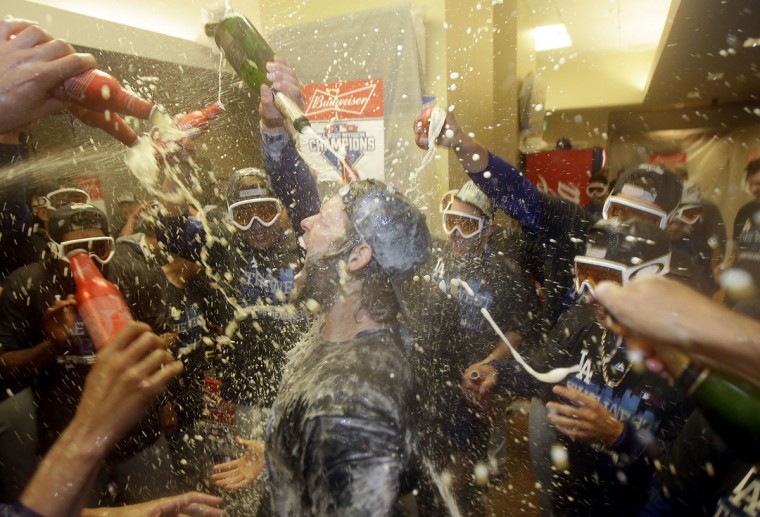 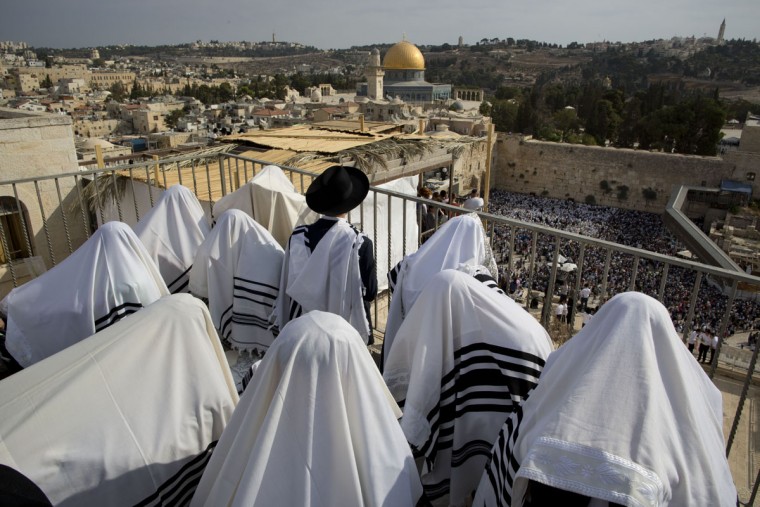 Covered in prayer shawls, Jewish men of the Cohanim Priestly caste participate in a blessing during the holiday of Sukkot, in front of the Western Wall, the holiest site where Jews can pray in Jerusalem’s Old City, Wednesday, Sept. 30, 2015. The Cohanim, believed to be descendants of priests who served God in the Jewish Temple before it was destroyed, perform a blessing ceremony of the Jewish people three times a year during the festivals of Passover, Shavuot and Sukkot. (AP Photo/Oded Balilty) 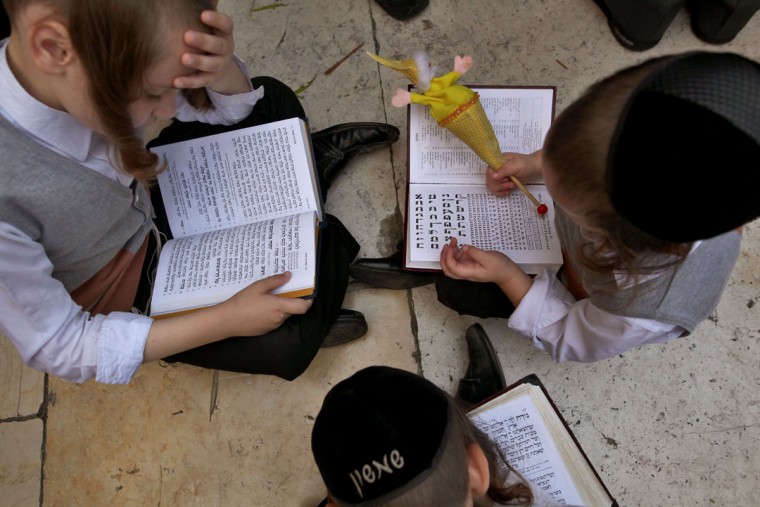 Ultra-Orthodox Jewish children sit on the floor and pray as they attend the annual Cohanim prayer (priest’s blessing) during the Sukkot, or the feast of the Tabernacles, holiday at the Western Wall in the old city of Jerusalem on September 30, 2015. Tens of thousands of Jews make the week-long pilgrimage to Jerusalem during Sukkot, which commemorates the desert wanderings of the Israelites after their exodus from Egypt. (AFP Photo/Gil Cohen magen) 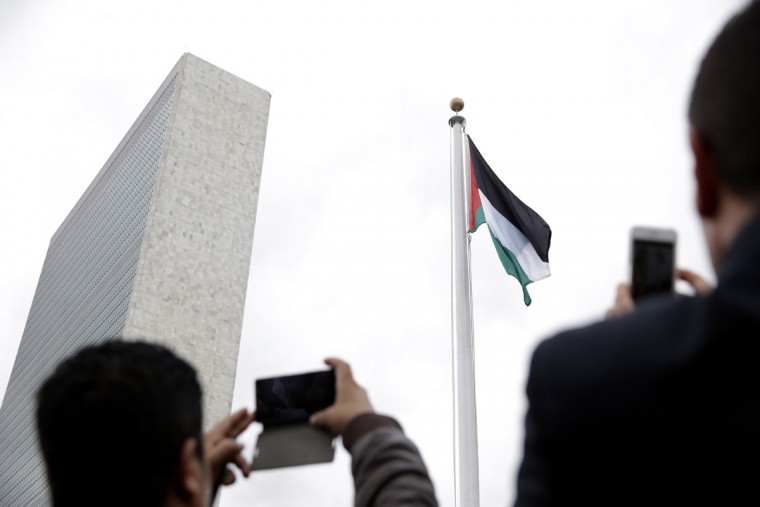 People photograph the State of Palestine flag as it flies for the first time at U.N. headquarters, Wednesday, Sept. 30, 2015. (AP Photo/Seth Wenig) 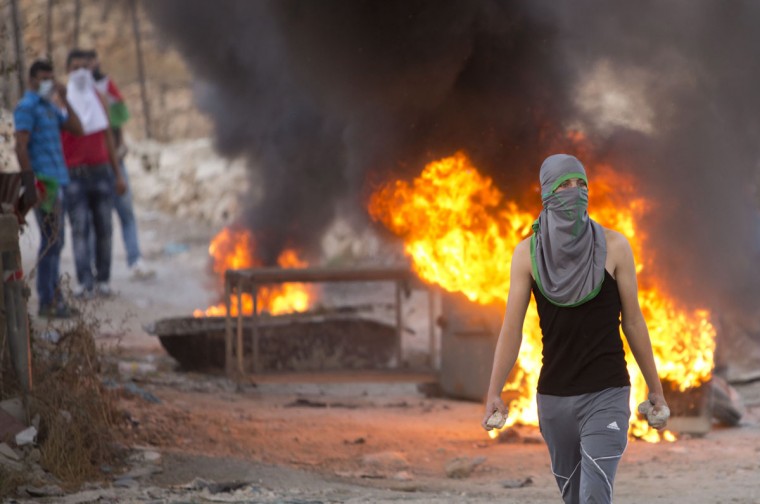 A Palestinian demonstrator holds rocks during clashes with Israeli security forces, at Hizme checkpoint near the West Bank city of Ramallah, Wednesday, Sept. 30, 2015, as Palestinian President Mahmoud Abbas addressed the UN General Assembly and declared that he is no longer bound by agreements signed with Israel. (AP Photo/Majdi Mohammed) 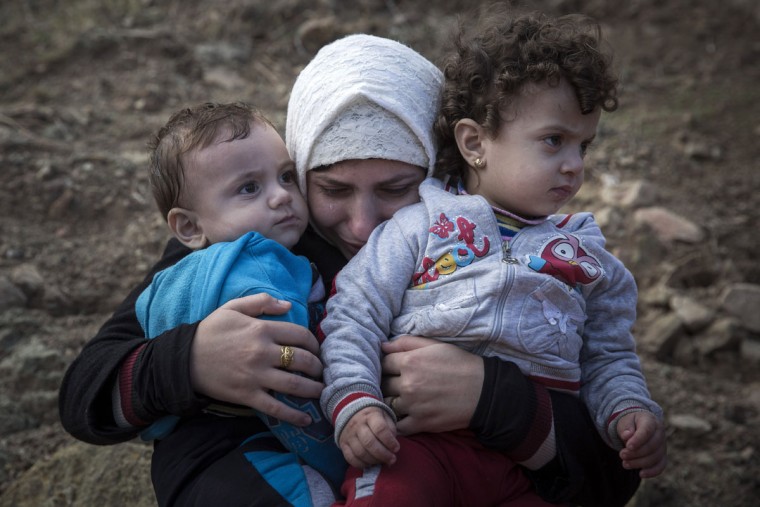 A Syrian mother cries as she hugs her children after spending five hours on a dinghy to approach the Greek island of Lesbos from the Turkish coasts on Wednesday, Sept. 30, 2015. The International Organization for Migration says a record number of people have crossed the Mediterranean into Europe this year, now topping half a million, with some 388,000 entering via Greece. (AP Photo/Santi Palacios) 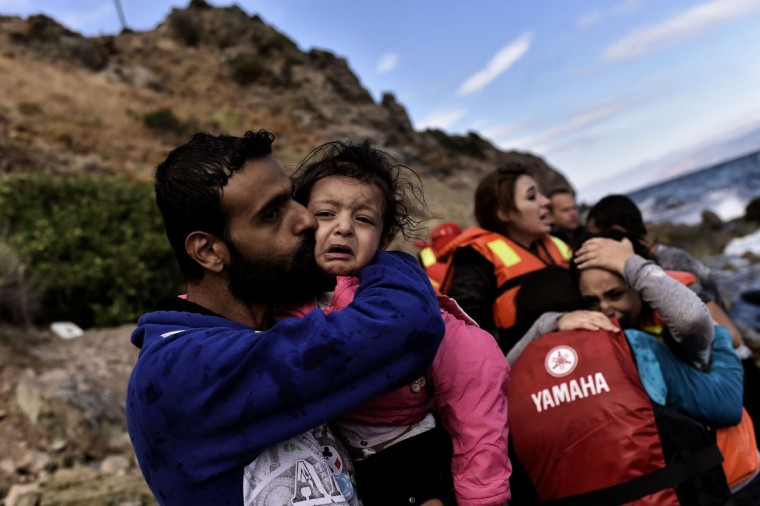 A man kisses his child as refugees and migrants arrive to the Greek island of Lesbos after crossing the Aegean sea from Turkey on September 30, 2015. Europe’s migrant crisis was set to be in focus at the UN with Secretary General Ban Ki-moon seeking to muster a global response to the exodus of vast numbers of people from Syria and elsewhere. (AFP Photo/Aris Messinis) 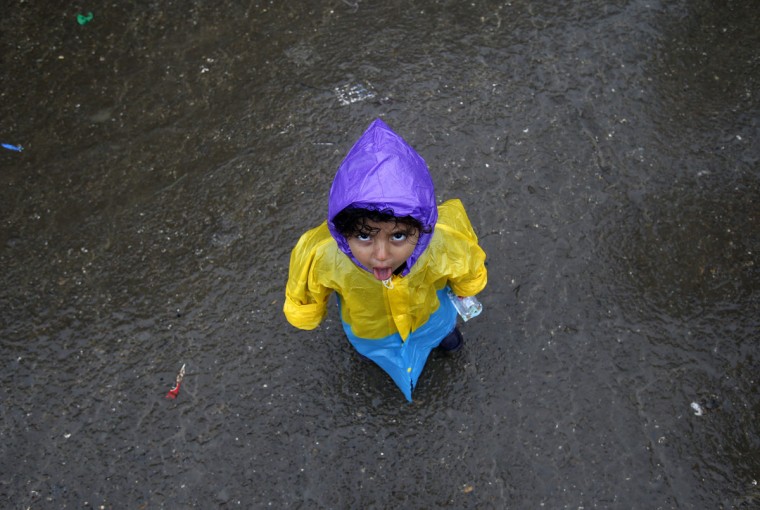 A migrant child stands on a muddy road near the border line between Serbia and Croatia, near the village of Berkasovo, about 100 km west from Belgrade, Serbia, Tuesday, Sept. 29, 2015. Refugees from countries such as Syria, Iraq and Eritrea are used to warm climate without sudden weather changes. The majority now passing through the Balkans started their months-long journeys in the summer, unaware it would take so long to reach Western Europe. (AP Photo/Darko Vojinovic) 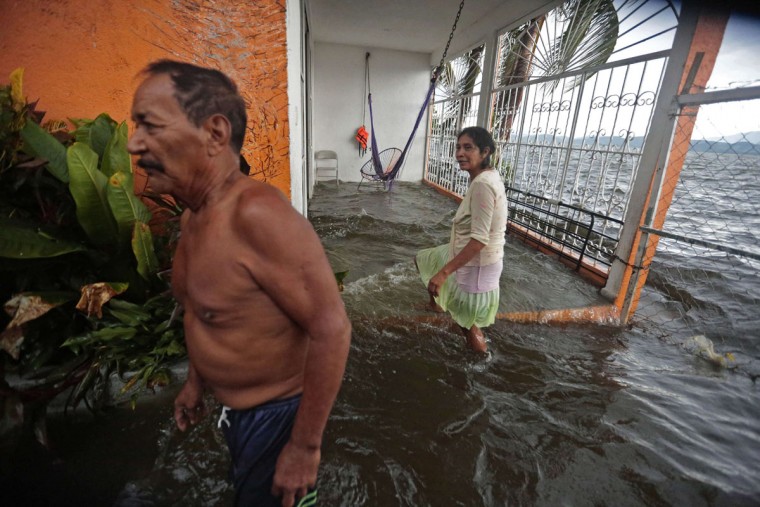 A couple remains at a flooded house due to the overflowing of the Coyuca lagoon in Acapulco, Guerrero State, Mexico, on September 29, 2015, during the passage of tropical storm Marty. Marty, which had reached hurricane force at its peak, was downgraded to a tropical storm Tuesday as it churned in the Pacific Ocean off the coast of Mexican resort town Acapulco. (AFP Photo/Pedro Pardo) 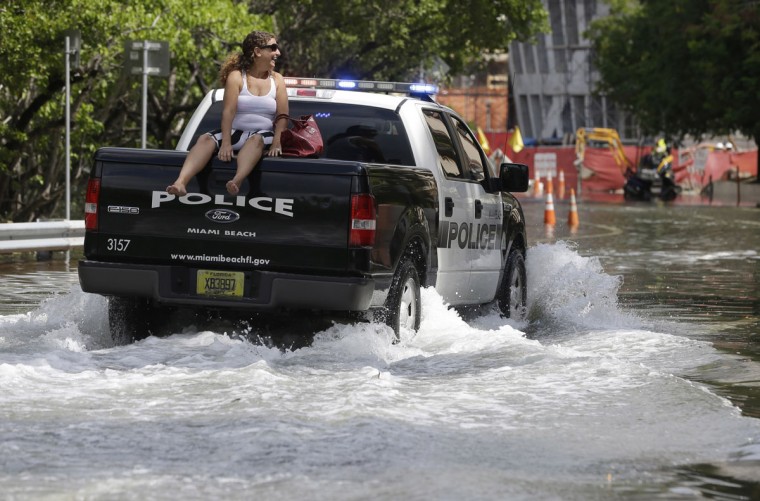 A woman gets a ride on a police truck navigating a flooded Indian Creek Drive, Wednesday, Sept. 30, 2015, in Miami Beach, Fla. The street flooding was in part caused by high tides due to the lunar cycle, according to the National Weather Service. (AP Photo/Lynne Sladky) 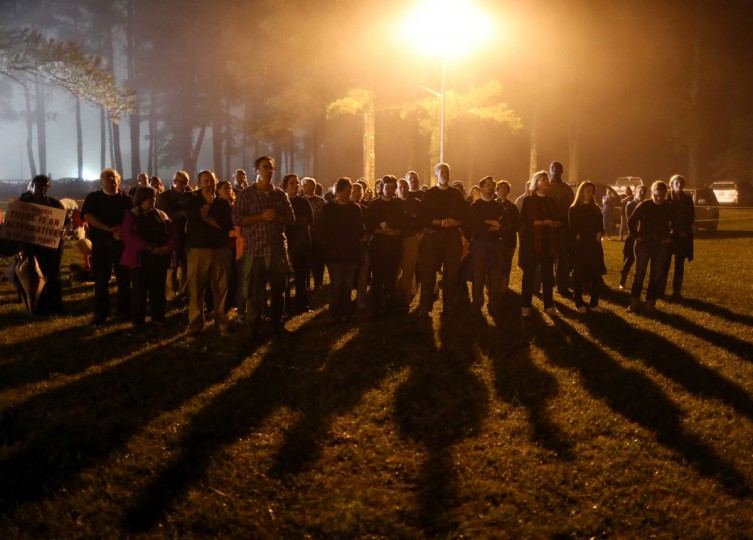 Protesters sing outside of Georgia Diagnostic Prison in Jackson, Ga., Tuesday, Sept. 29, 2015, before the scheduled execution of Kelly Renee Gissendaner. Gissendaner, who was scheduled to die by lethal injection Tuesday, was convicted of murder in the February 1997 slaying of her husband. (Ben Gray/Atlanta Journal-Constitution via AP) 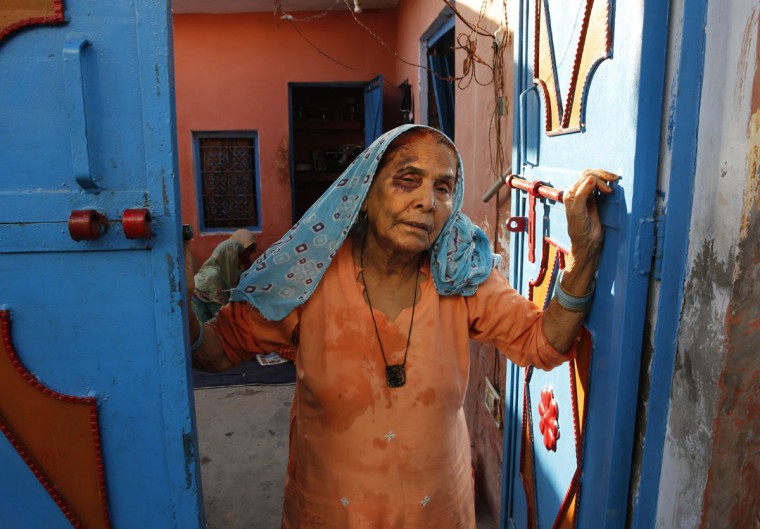 A bruised Asgari Begum, mother of 52-year-old Muslim farmer Mohammad Akhlaq, stands by the entrance of her home in Bisara, a village about 45 kilometers (25 miles) southeast of the Indian capital of New Delhi, Wednesday, Sept. 30, 2015. Indian police arrested eight people and were searching Wednesday for two more after villagers allegedly beat Akhlaq to death and severely injured his son upon hearing rumors that the family was eating beef, a taboo for many among Indiaís majority Hindu population. Since Prime Minister Narendra Modi, a Hindu nationalist, took office last year, hard-line Hindus have been demanding that India ban beef sales, a key industry for many within India’s poor, minority Muslim community. In many Indian states, the slaughtering of cows and selling of beef are either restricted or banned. (AP Photo/Manish Swarup) 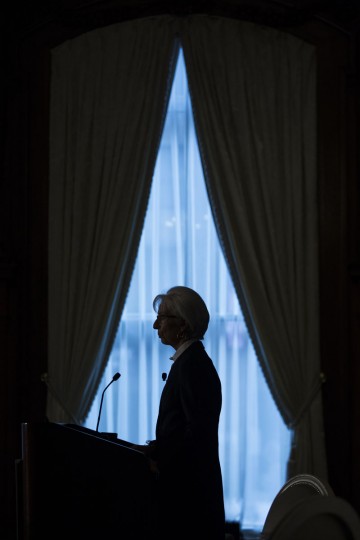 International Monetary Find (IMF) Managing Director Christine Lagarde speaks during an event hosted by the Council of the Americas in Washington, Wednesday, Sept. 30, 2015. Lagarde said global growth will likely be weaker this year as the world economy confronts a host of problems, including a refugee crisis in Europe, an economic slowdown in China and a pending rise in U.S. interest rates. (AP Photo/Evan Vucci) 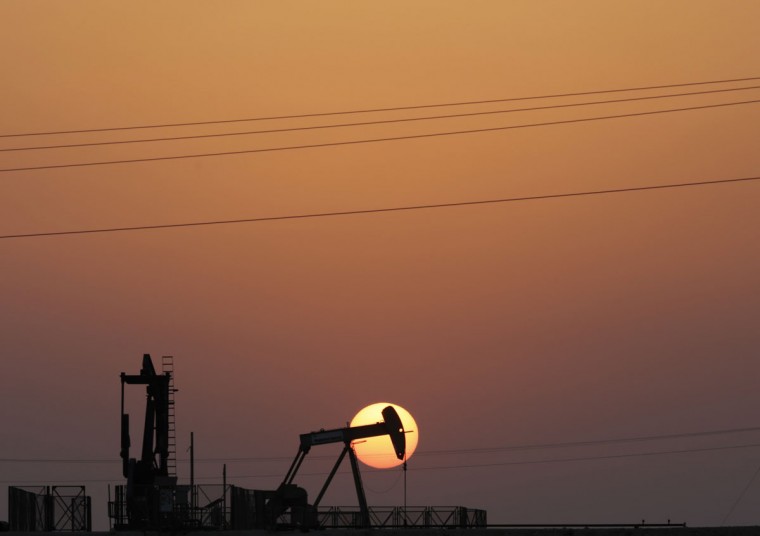 An oil pump works at sunset Wednesday, Sept. 30, 2015, in the desert oil fields of Sakhir, Bahrain. Consumer prices across the 19-country eurozone fell in September for the first time in half a year as energy prices tanked, official figures showed Wednesday in a development that’s likely to ratchet up pressure on the European Central Bank to give the region another dose of stimulus. (AP Photo/Hasan Jamali) 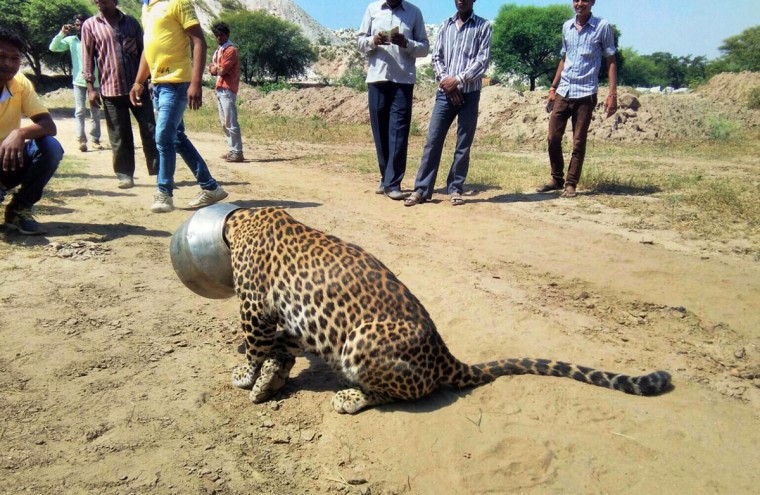 People stand around a leopard with its head stuck in a vessel in Rajsamand district of Rajasthan state, India, Wednesday, Sept. 30, 2015. The leopardís head got stuck when it attempted to drink water from the pot, according to news reports. Forest officials tranquilized the animal and sawed off the vessel later in the day. (AP Photo/Kabir Jethi)