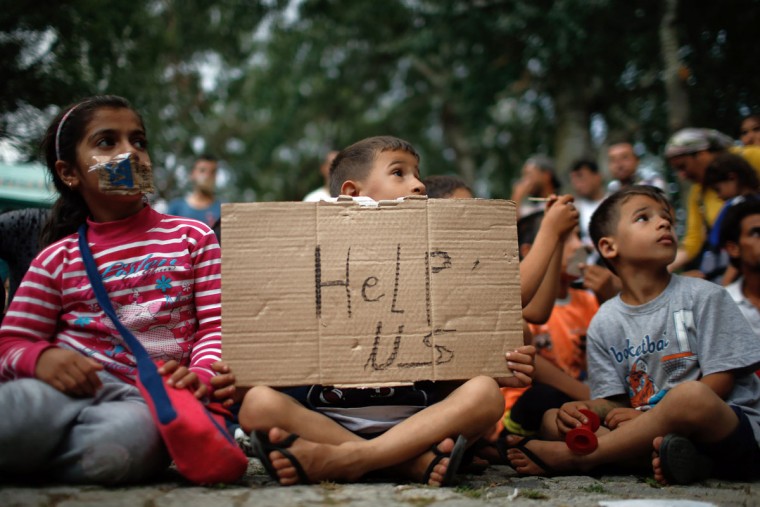 A child holds up a sign as migrants stage a protest in a stadium used for traditional Kirkpinar Oil Wrestling as they wait to walkdown a highway towards Turkeyís western border with Greece and Bulgaria, in Edirne, Turkey, Monday, Sept. 21, 2015. The migrants were stopped Friday by Turkish law enforcement on a highway near the city of Edirne, causing a massive traffic jam. (AP Photo/Emrah Gurel) 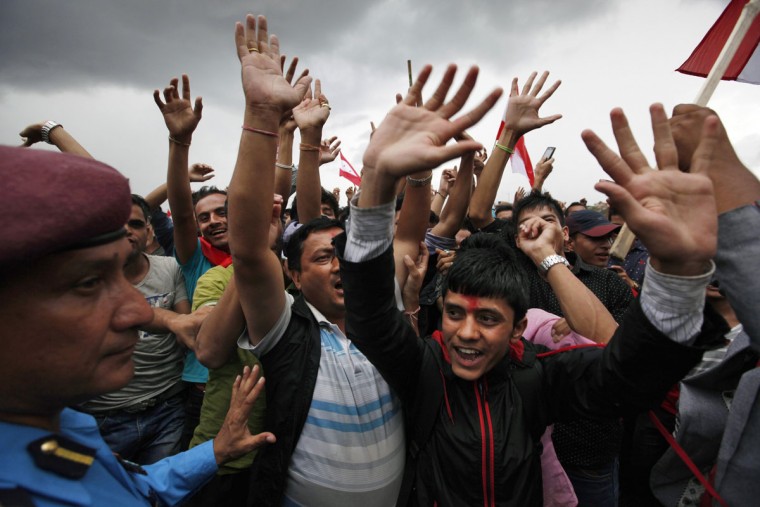 Nepalese people cheer as they attend a function held to celebrate the adoption of the country’s new constitution in Kathmandu, Nepal, Monday, Sept. 21, 2015. Nepal on Sunday, Sept. 20, 2015, formally adopted a much anticipated and long-delayed constitution that took more than seven years to complete following a decade of political infighting. (AP Photo/Niranjan Shrestha) 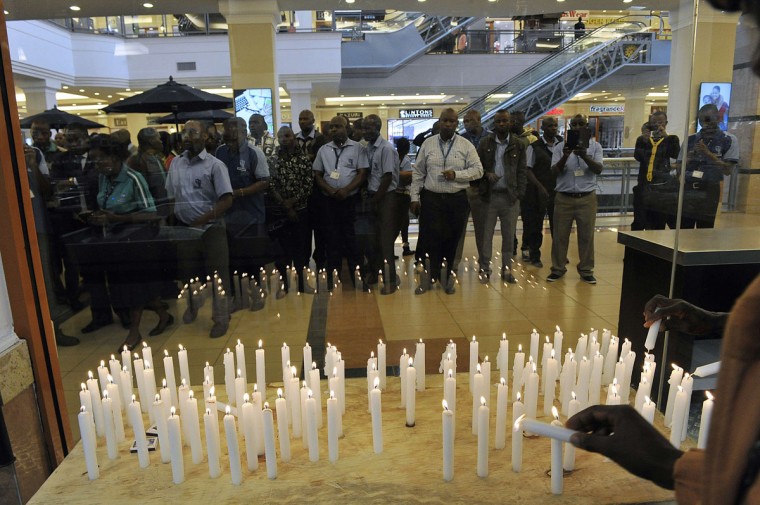 Staff of the Nakumatt supermarket chain gather in front of candles lit to mark the second anniversary commemorations of the Westgate shopping mall attack by militants from Somalia’s Al-Qaeda-affiliated Shebab on September 21, 2015 in Nairobi.The attack began on September 21, 2013, when four gunmen entered the mall, spraying shoppers and staff with machine gun fire and tossing grenades into crowds of Saturday shoppers and diners. The attack left 67 dead. (AFP Photo/Simon Maina) 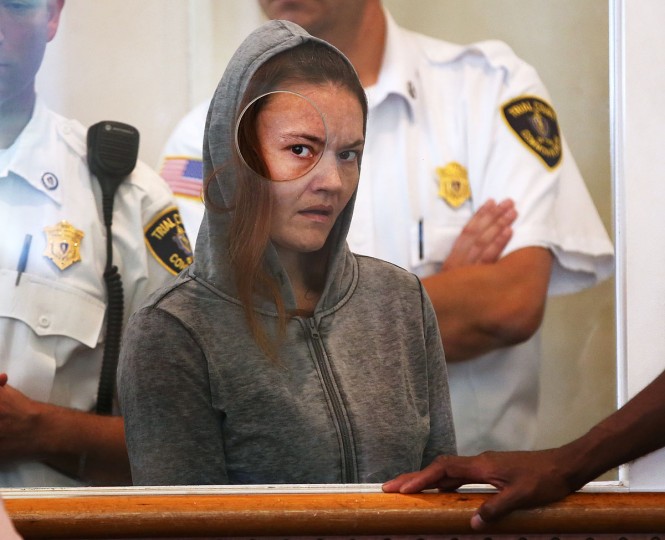 Rachelle Dee Bond is arraigned on charges of acting after the fact in helping to dispose of the body of her daughter, the girl dubbed Baby Doe, in Dorchester District Court, on Monday, Sept. 21, 2015, in Boston. The judge ordered Bond held on $1 million cash bail and Bond’s boyfriend, Michael McCarthy, held without bail on murder charges. (Pat Greenhouse/The Boston Globe via AP, Pool) 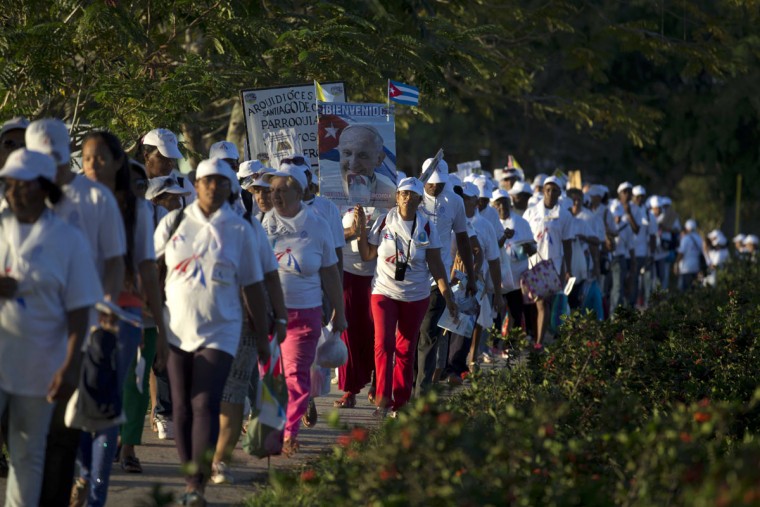 People arrive at the Plaza of the Revolution to attend a Mass to be celebrated by Pope Francis in Holguin, Cuba, Monday, Sept. 21, 2015. Francis is the first pope to visit Holguin, Cuba’s third-largest city. (AP Photo/Eduardo Verdugo) 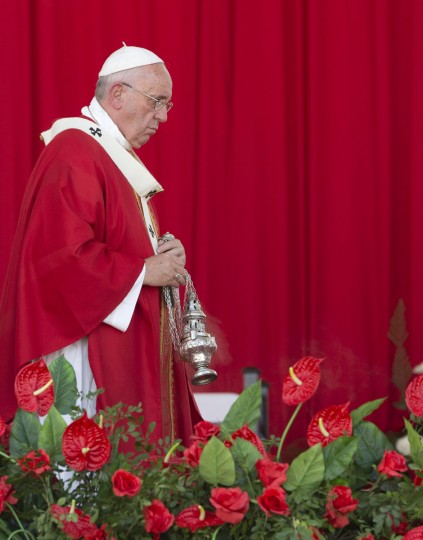 Pope Francis circles the altar with incense during a Mass in the Plaza of the Revolution, in Holguin, Cuba, Monday, Sept. 21, 2015. Speaking in his homily Francis called on Cubans to heed Jesus Christ’s invitation to overcome resistance to change. Francis is the first pope to visit Holguin, Cuba’s third-largest city. (AP Photo/Alessandra Tarantino) 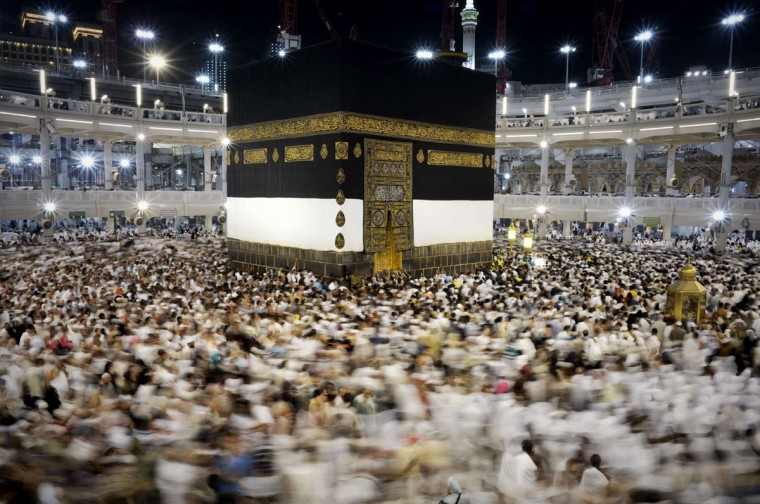 Muslim pilgrims circle counterclockwise Islam’s holiest shrine, the Kaaba, at the Grand Mosque in the Saudi holy city of Mecca, late on September 20, 2015. The annual hajj pilgrimage begins on September 22, and more than a million faithful have already flocked to Saudi Arabia in preparation for what will for many be the highlight of their spiritual lives. (AFP Photo/Mohammed Al-shaikh) 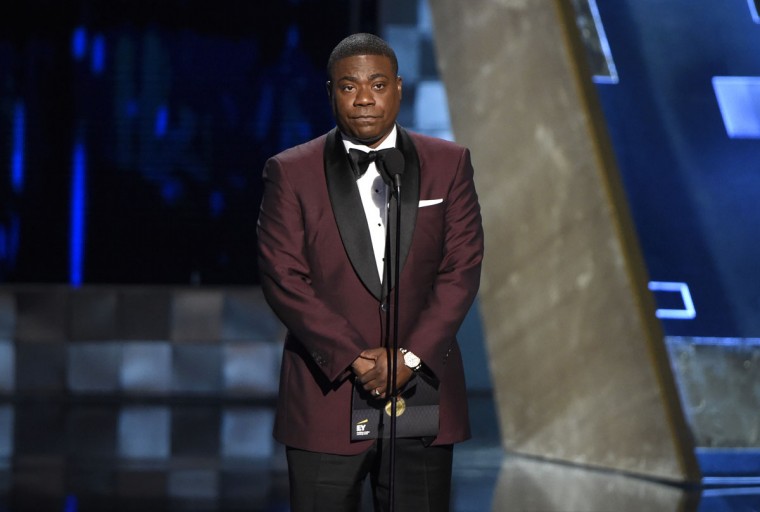 Tracy Morgan presents the award for outstanding drama series at the 67th Primetime Emmy Awards on Sunday, Sept. 20, 2015, at the Microsoft Theater in Los Angeles. (Photo by Chris Pizzello/Invision/AP) 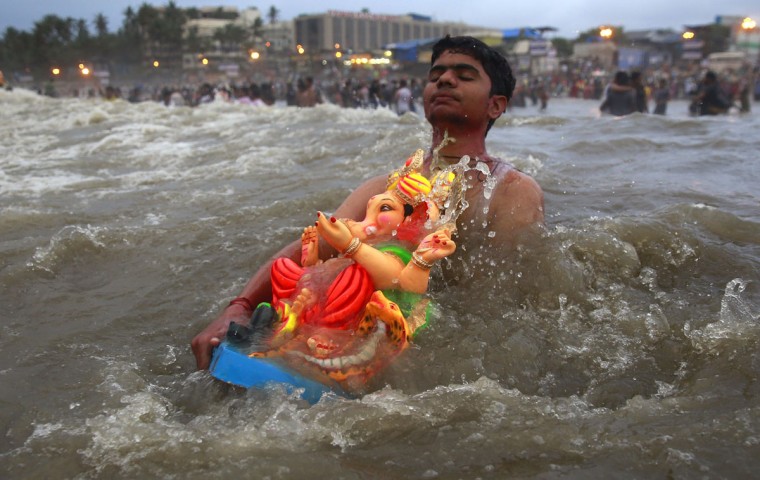 A devotee carries an idol of Hindu elephant headed god Ganesha to immerse it in the Arabian Sea during Ganesh Chaturthi festival celebrations in Mumbai, India, Monday, Sept. 21, 2015. The festival is celebrated as the birthday of Ganesha, the Hindu god of wisdom, prosperity and good fortune. (AP Photo/Rafiq Maqbool) 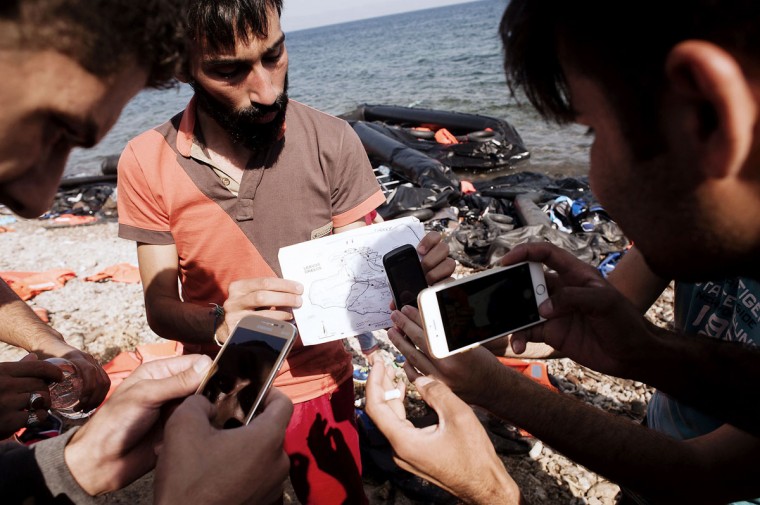 Refugees use mobile phones to take pictures of a map upon their arrival on Eftalou beach, west of the port of Mytilene, on the Greek island of Lesbos after crossing the Aegean sea from Turkey on September 21, 2015. Europe’s migrant crisis took centre-stage at the UN human rights council, as European states said the need to end the conflict in Syria was at an all-time high. (AFP Photo/Iakovos Hatzistavrou) 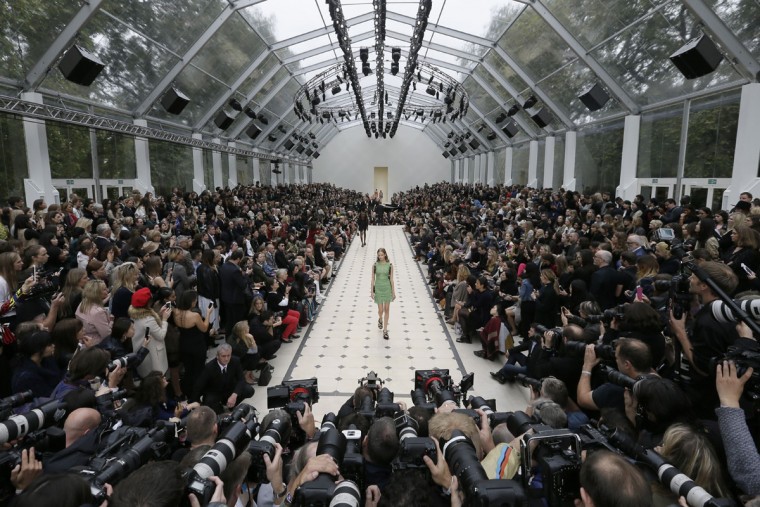 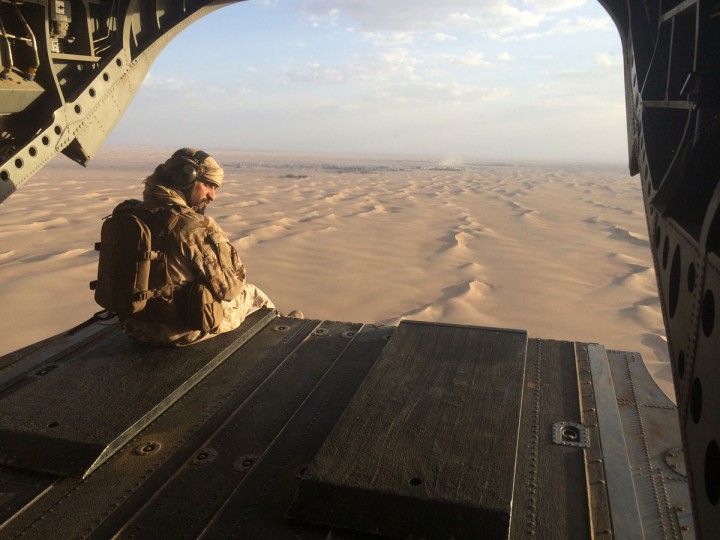 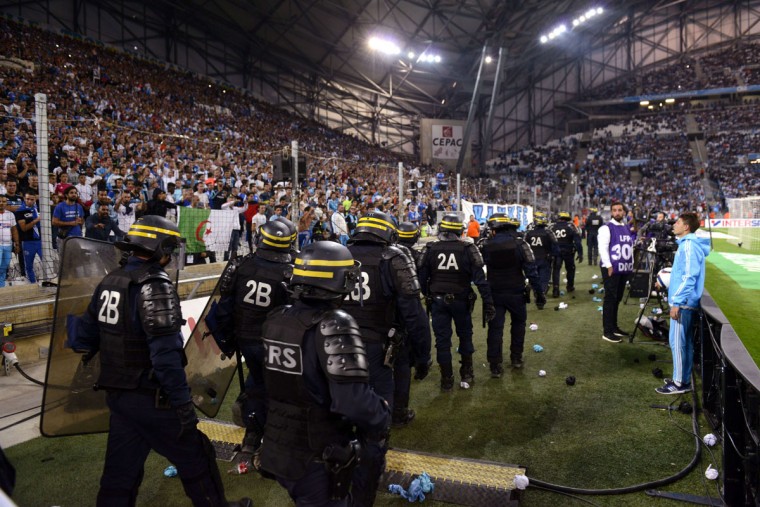 Riot police are pictured during a game interruption after crowd trouble during the French L1 football match Marseille (OM) vs Lyon (OL) on September 20, 2015 at Velodrome Stadium in Marseille, southern France. The match restarted after a 20-minute delay. (AFP Photo/Franck Pennant) 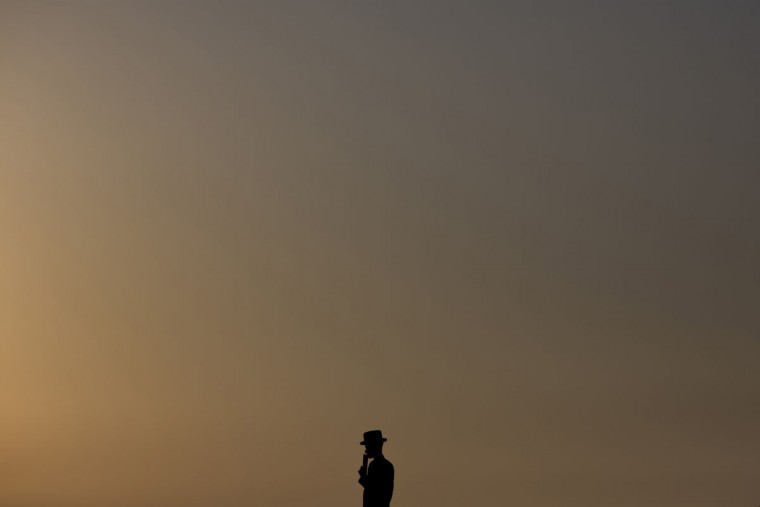 An ultra-Orthodox Jewish man of the Hassidic sect Vizhnitz prays on a hill overlooking the Mediterranean Sea as they participate in a Tashlich ceremony in Herzeliya, Israel, Monday, Sept. 21, 2015. Tashlich, which means “to cast away” in Hebrew, is a practice in which Jews go to a large flowing body of water and symbolically “throw away” their sins by throwing a piece of bread, or similar food, into the water before the Jewish holiday of Yom Kippur, which start on Tuesday at sundown. (AP Photo/Ariel Schalit)