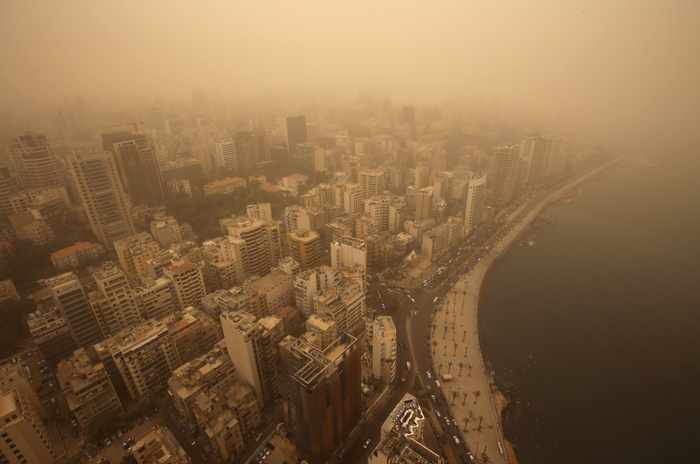 A sandstorm shrouds the capital city of Beirut, Lebanon, on Tuesday. The unseasonal sandstorm hit Lebanon and Syria, reducing visibility and sending dozens to hospitals with breathing difficulties because of the fine dust. (Hussein Malla/AP) 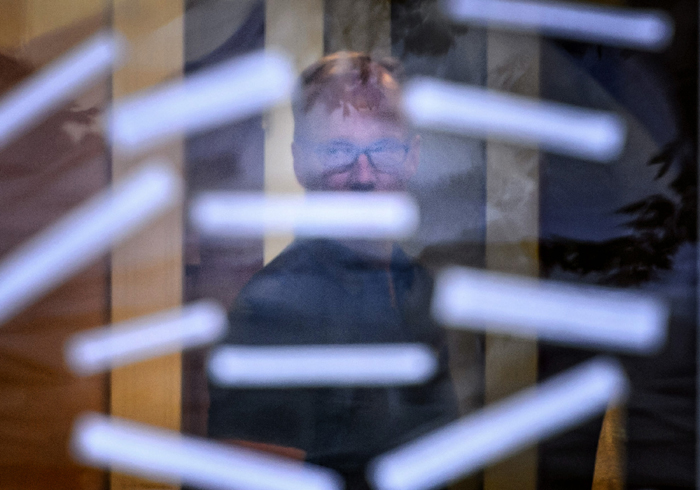 Dentist Walter Palmer looks back from his office through the front door, where protesters hung notes calling for his extradition, on Tuesday in Bloomington, Minn. A private security guard later removed the protesters. (Glen Stubbe/Minneapolis Star Tribune/TNS) 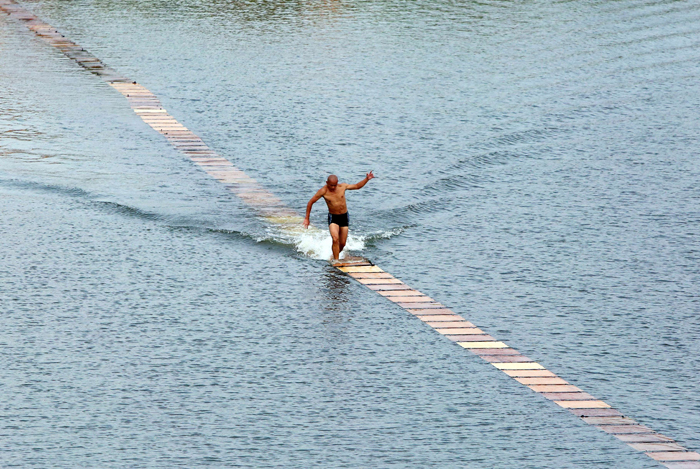 This picture taken on Aug. 29 shows a Shaolin monk breaking his own world record for “running on water” in Quanzhou, Fujian province. Shi Liliang, from the Quanzhou Shaolin Temple, managed to run 125 metres on 200 plywood planks laid across a reservoir, according to local media. It took three attempts before Shi succeeded in breaking his previous record of 120 metres. The task demands excellent balance and great speed, according to reports. (CHINA OUTSTR/AFP/Getty Images)

The New York City skyline is seen from the USTA Billie Jean King National Tennis Center, the venue for the 2015 U.S. Open, on Monday in New York. (KENA BETANCUR/AFP/Getty Images) 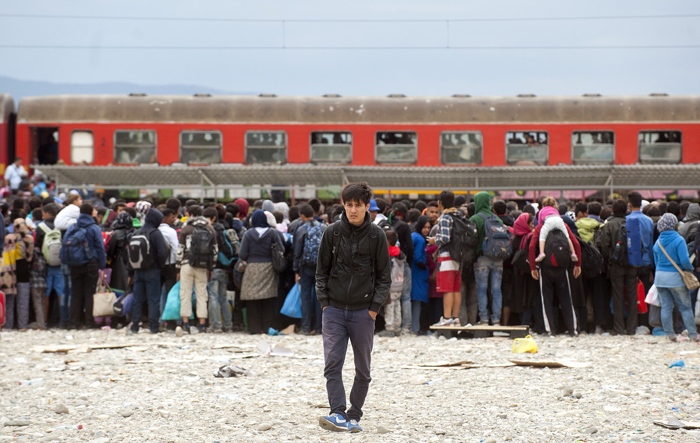 Migrants and refugees board a train after crossing the Macedonian-Greek border near Gevgelija on Tuesday. Tensions were running high at the border between Greece and Macedonia on Monday with police stepping in to keep order amid the crowd of thousands massed at the frontier to journey to the European Union. More than 2,000 people entered Macedonia on Monday while at least 8,000 waited on the Greek side to cross into the former Yugoslav republic, according to an AFP photographer on the spot. (ROBERT ATANASOVSKI/AFP/Getty Images) 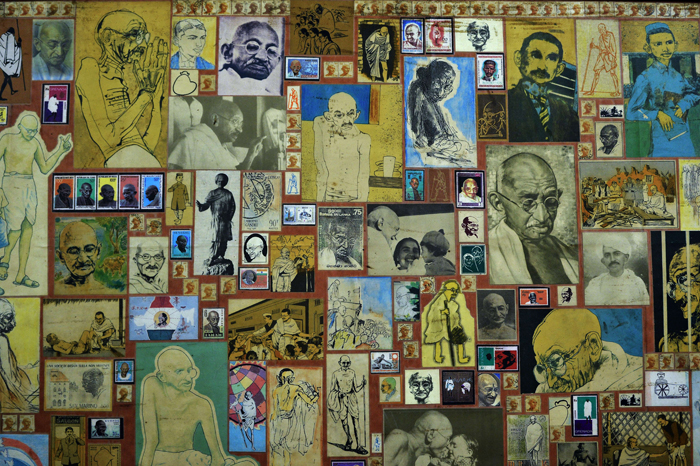 Various images of Mahatma Gandhi make up a handmade collage featured in the reception area at the Gandhi Peace Foundation in New Delhi on Monday. (Chandan Khanna/AFP/Getty Images) 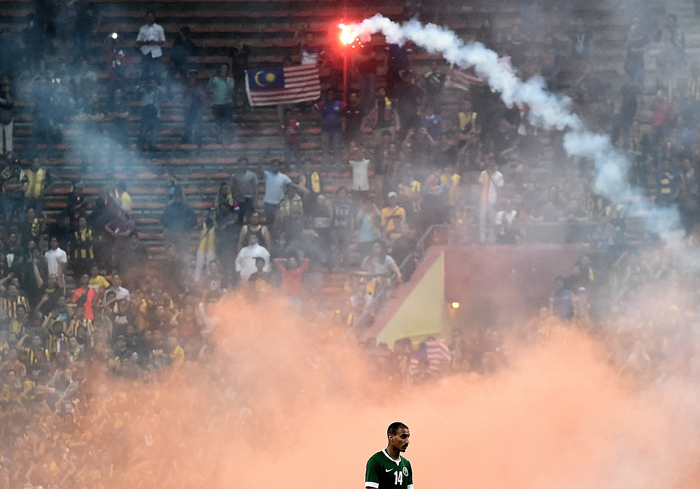 Yasyn Alnakhli of Saudi Arabia walks off the pitch after flares were thrown on the pitch during the 2018 World Cup qualifying football match between Malaysia and Saudi Arabia in Shah Alam on Tuesday. (MANAN VATSYAYANA/AFP/Getty Images) 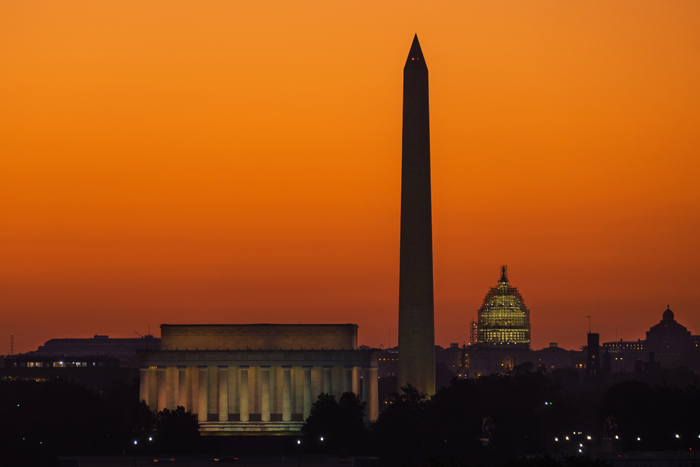 The orange sky of sunrise is captured behind the skyline of Washington on Tuesday, the first day back to work for the U.S. Congress after their summer recess. (J. David Ake/AP) 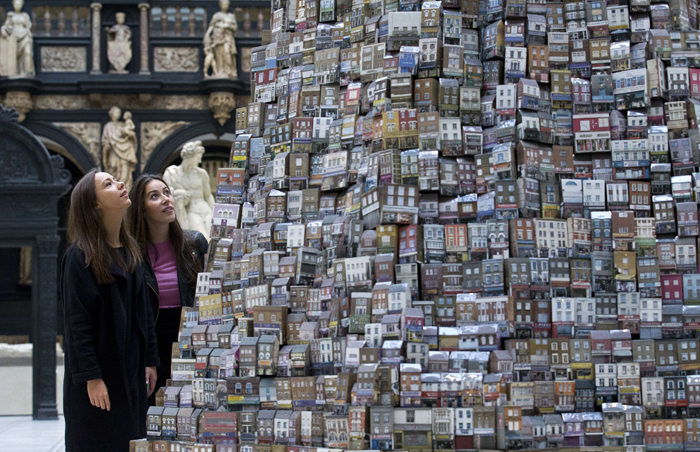 Visitors pose for pictures beside an artwork titled “The Tower of Babel” by British artist Barnaby Barford during a photocall at the Victoria & Albert Museum in London on Tuesday. The 6m high ceramic artwork is composed of 3,000 individual three dimensional bone china buildings, each measuring 10 13cm tall and each depicting a real London shop. The artist photographed over 6,000 shop fronts in the process of making the tower. (JUSTIN TALLIS/AFP/Getty Images) 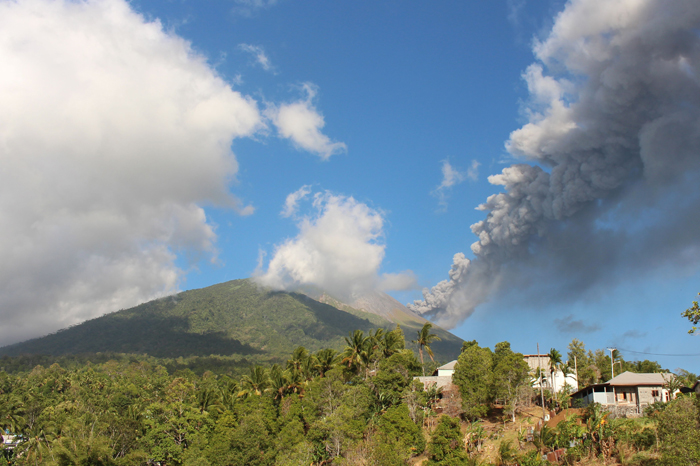 Mount Gamalama spews volcanic ash in Ternate, North Maluku on Tuesday. The eruption, which reached 1000-meters in the air, disrupted the Sultan Babullah airport for approximately two and a half hours, according to an Indonesian official. (PHOTOSTR/AFP/Getty Images) 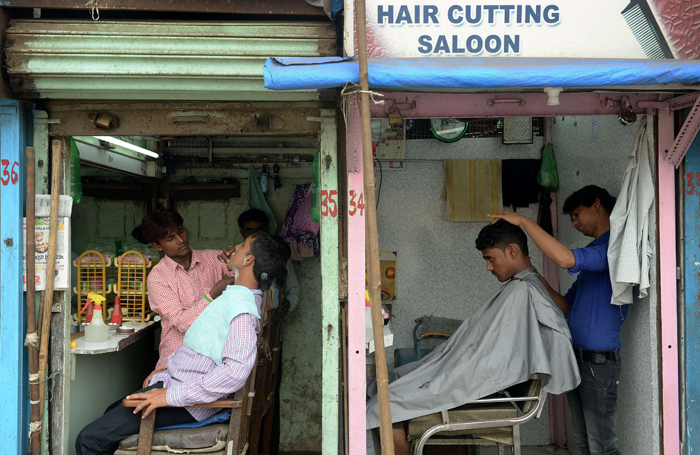 Indian barbers attend to customers at their roadside salons in Mumbai on Tuesday. (INDRANIL MUKHERJEE/AFP/Getty Images) 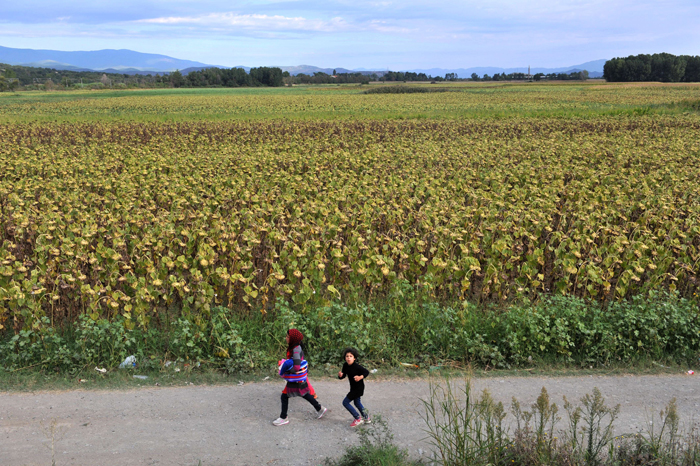 Migrants and refugees are seen walking past sunflowers close to the Greek-Macedonian border near the village of Idomeni, in northern Greece on Tuesday. Fresh clashes erupted between police and migrants on the Greek island of Lesbos, the latest flashpoint of the crisis shaking Europe as EU President Donald Tusk warned the refugee “exodus” could last for years. (SAKIS MITROLIDIS/AFP/Getty Images) 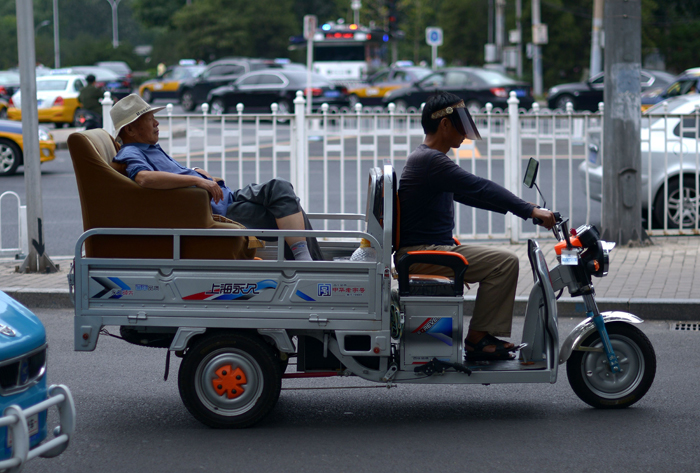 An elderly man sits on a sofa as he is transported on as electric carrier tricycle along a road in Beijing on Tuesday. (WANG ZHAOWANG ZHAO/AFP/Getty Images)