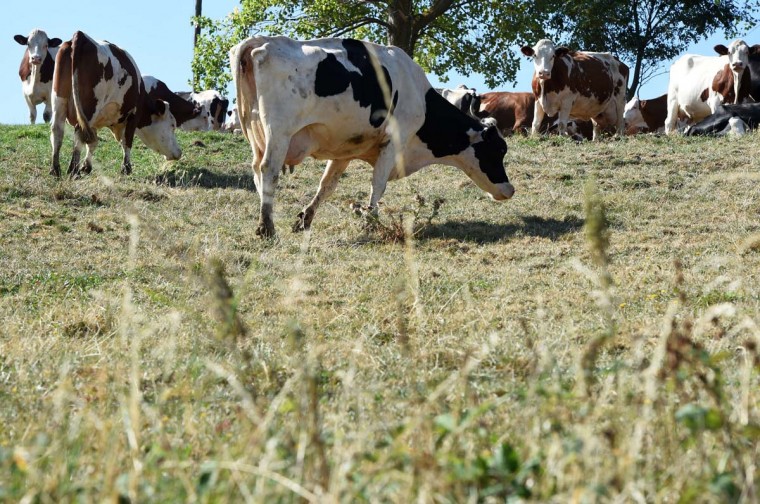 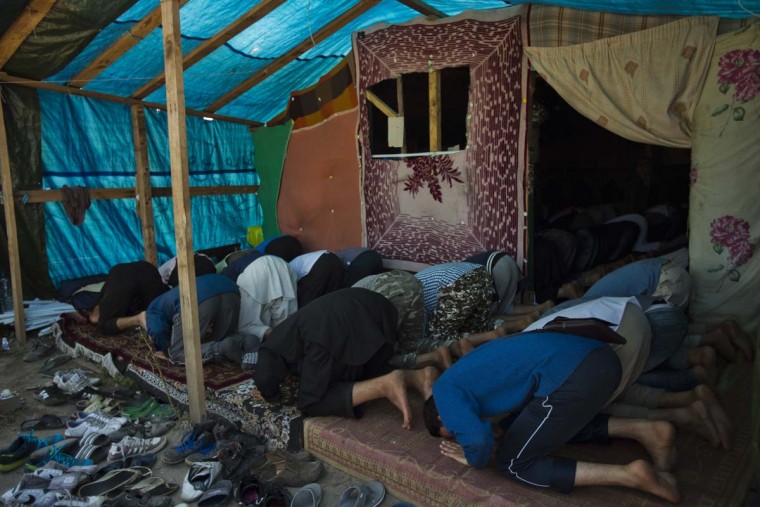 Afghan migrants pray at a makeshift mosque during Friday prayers at a camp set near Calais, northern France, Aug. 7, 2015. An estimated 2,500 migrants are currently at the windswept camp surrounded by sand dunes that sprung up when a state-approved day center for migrants was opened nearby. The ramshackle encampment of tents and lean-tos is referred to as the “jungle,” like the camps it replaced. || CREDIT: EMILIO MORENATTI – AP PHOTO 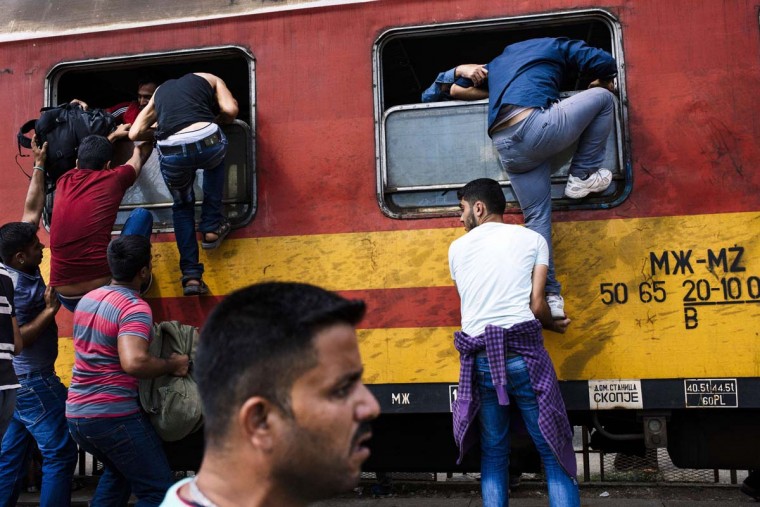 Migrants try to get on a train heading to the border with Serbia at the train station in Gevgelija, on the Macedonian border on August 7, 2015. Some 224,000 migrants and refugees have crossed the Mediterranean to Europe so far this year, the UN said. || CREDIT: DIMITAR DILKOFF – AFP/GETTY IMAGES 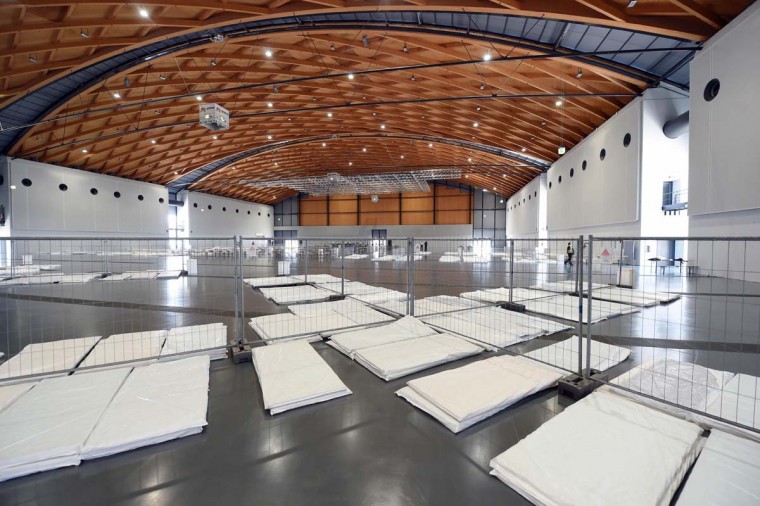 An exhibition hall on the grounds of the Karlsruhe trade fair is prepared to serve as temporary accommodation for refugees on August 7, 2015, in Karlsruhe, southern Germany. The hall is designated to host around 500 refugees in the following weeks. Germany has hosted more than 300,000 asylum seekers since the start of 2015, according to newspaper Die Welt. ULI DECK/AFP/Getty Images 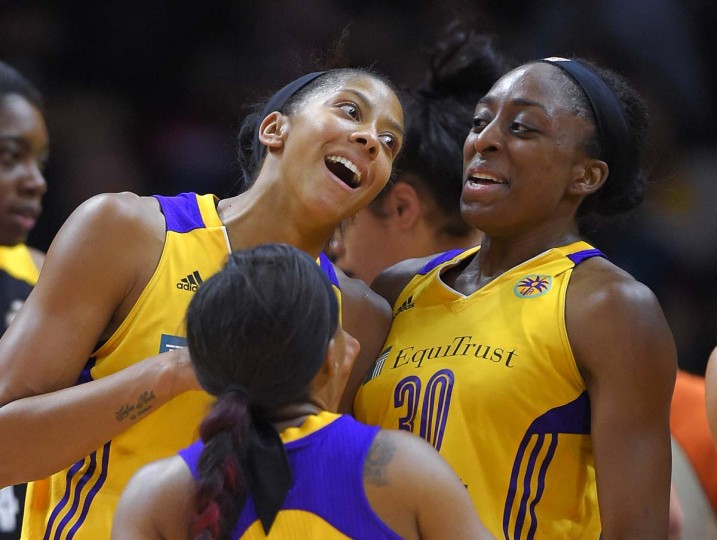 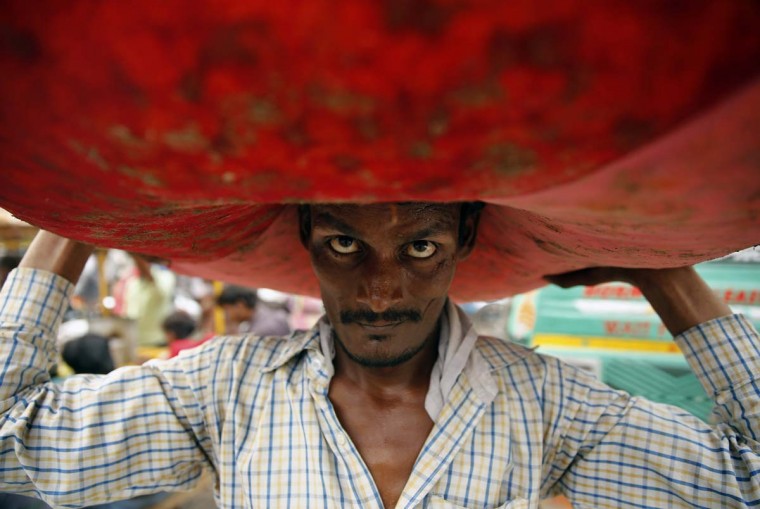 An Indian vendor carries a huge sack of flowers on his head at a wholesale flower market in Lucknow, India, Friday, Aug. 7, 2015. On a good day, the vendor can earn 6 to 8 US dollars. || CREDIT: RAJESH KUMAR SINGH – AP PHOTO 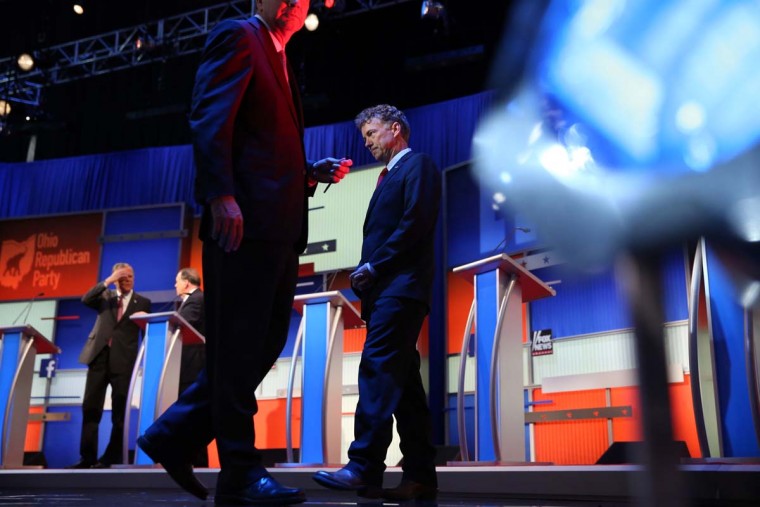 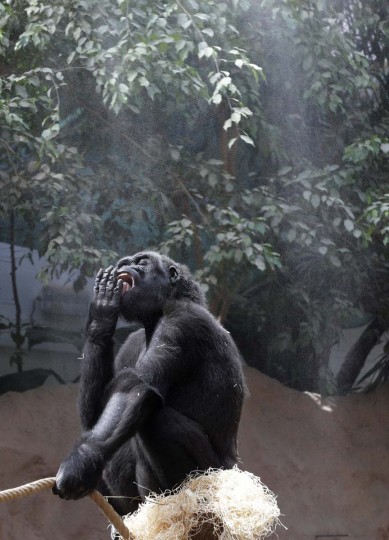 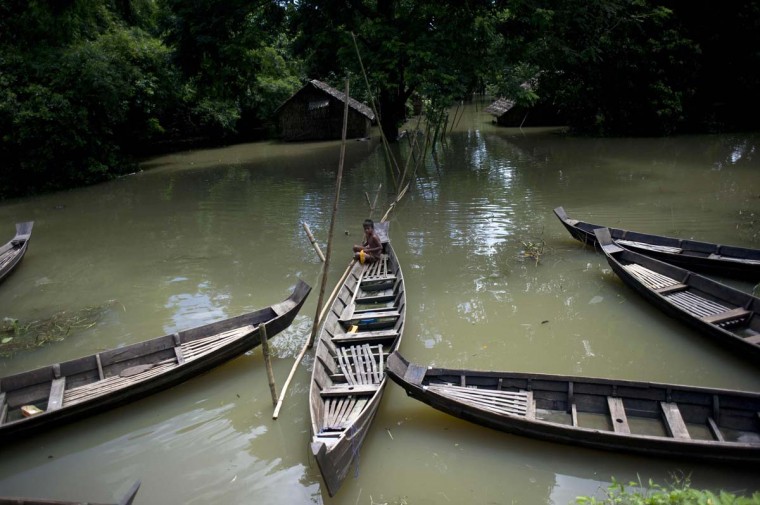 A boy sits in a boat in a flooded area in Kyouk Taing village near Nyaung Don township in Myanmar’s Irrawaddy region on August 7, 2015. Twelve of Myanmar’s 14 regions have been struck, with officials saying 74 people have been killed and more than 330,000 affected — many forced into monasteries and other makeshift shelters after their homes were inundated. || CREDIT: YE AUNG THU – AFP/GETTY IMAGES 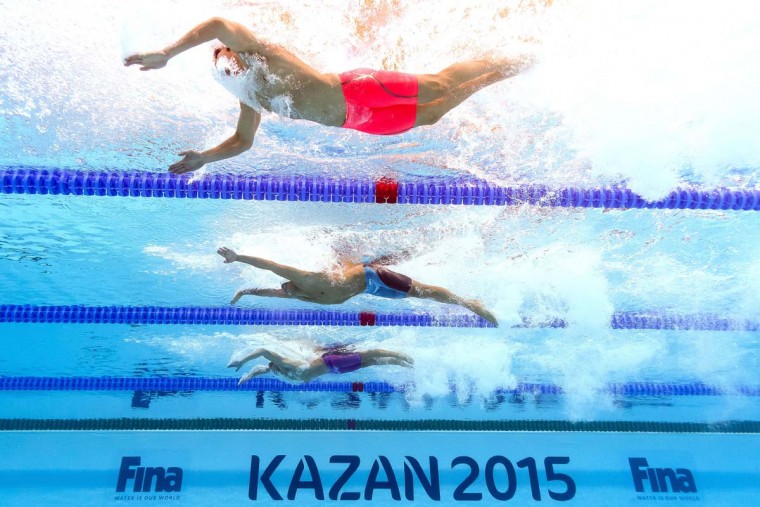 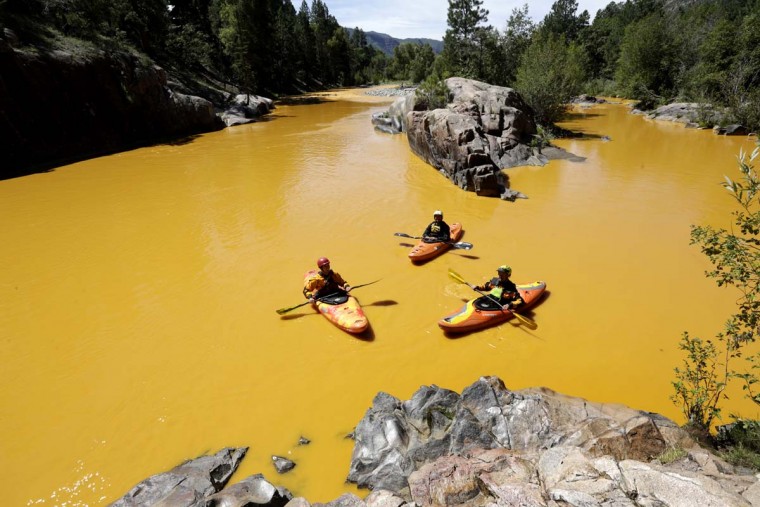 People kayak in the Animas River near Durango, Colo., Thursday, Aug. 6, 2015, in water colored from a mine waste spill. The U.S. Environmental Protection Agency said that a cleanup team was working with heavy equipment Wednesday to secure an entrance to the Gold King Mine. Workers instead released an estimated 1 million gallons of mine waste into Cement Creek, which flows into the Animas River.
(Jerry McBride/The Durango Herald via AP) 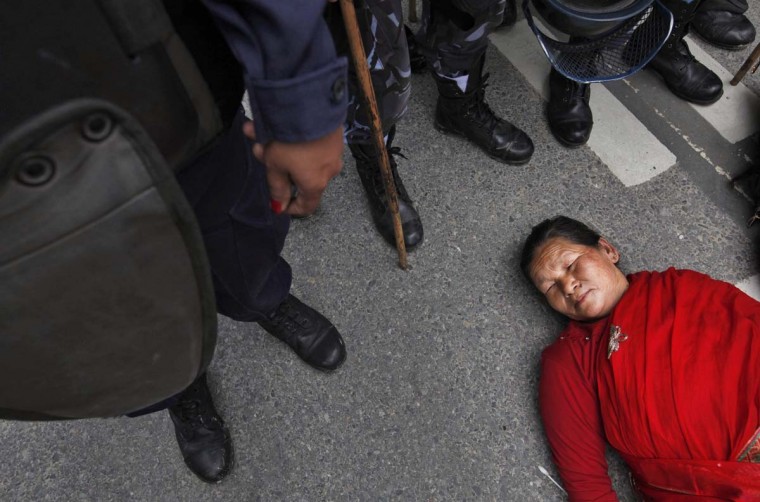 A Nepalese woman lies on the ground as she acts to sleep during a protest demanding provision in the new constitution to avail citizenship in the name of one’s mother, in Kathmandu, Nepal, Friday, Aug. 7, 2015. Nepal’s proposed new constitution has sparked fury from women who protested against the denial of citizenship rights to children if their fathers are not Nepalese citizens. While Nepal’s new constitution promises full citizenship to all children with one Nepalese parent, the laws are routinely flouted when only the mother is a citizen. || CREDIT: NIRANJAN SHRESTHA – AP PHOTO 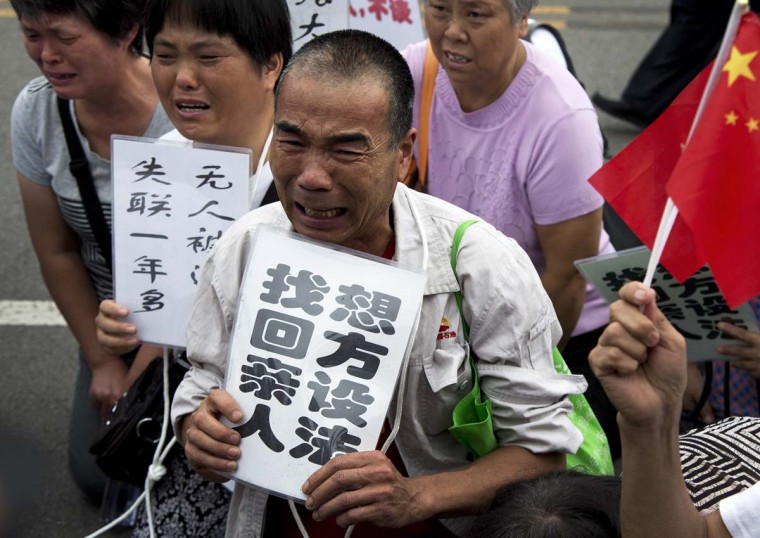 Relatives of the passengers aboard Malaysia Airlines Flight 370 that went missing on March 8, 2014, kneel down and cry in front of the media ahead of a briefing given by the airlines outside a help center in Beijing Friday, Aug. 7, 2015. Families aching for closure after their relatives disappeared aboard the flight vented deep frustration Thursday at differing statements from Malaysia and France over whether the finding of a plane part had been confirmed. The signs held by the relatives read: “Missing more than a year, no one is asked for taking responsibility, left,” and “Try all of efforts to look for family members.” || CREDIT: ANDY WONG – AP PHOTO 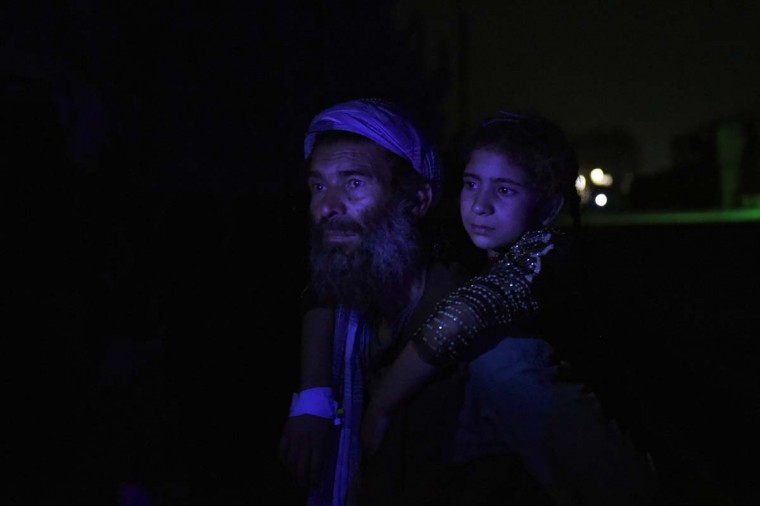 An Afghan man carries his wounded daughter at the site of a powerful truck bomb explosion in Kabul on August 7, 2015. A powerful truck bomb killed at least seven people and wounded more than 100 others, officials said, the first major attack in the Afghan capital since the announcement of Taliban leader Mullah Omar’s death. || CREDIT: WAKIL KOHSAR – AFP/GETTY IMAGES 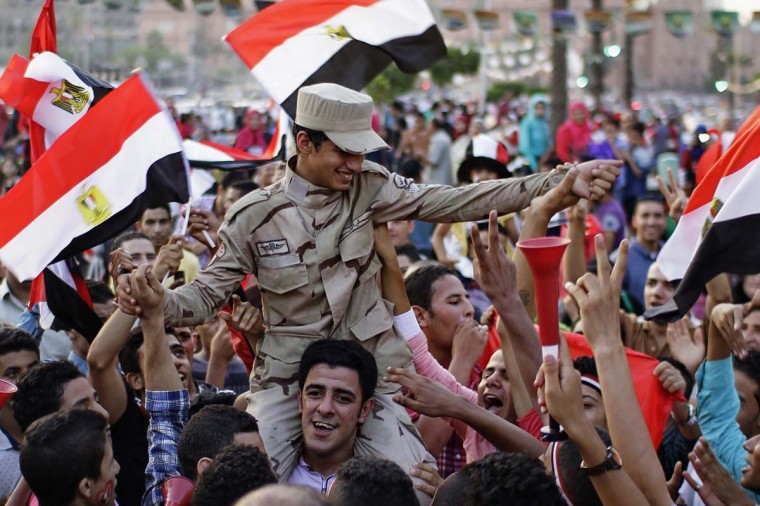 A man carries a member of the Egyptian forces on his shoulders as they join others to celebrate the new Suez Canal opening, while gathering around Tahrir Square in downtown Cairo, Egypt, Thursday, Aug. 6, 2015. With much pomp and fanfare, Egypt on Thursday unveiled a major extension of the Suez Canal billed by its patron, President Abdel-Fattah el-Sissi as a historic achievement needed to boost the country’s ailing economy after years of unrest. (Ahmed Abd El-Latif/El Shorouk newspaper via AP) 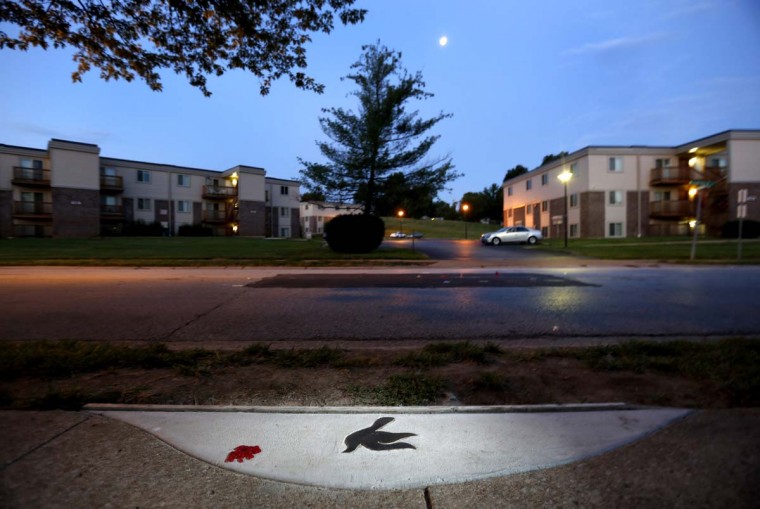 In this Sunday, Aug. 2, 2015, photo, a marker in the shape of a dove is embedded in the sidewalk near the spot where Michael Brown was shot and killed by police officer Darren Wilson in Ferguson, Mo. A year ago, Ferguson was thrust into the national spotlight after the death of Brown giving way to the “Black Lives Matter” movement. || CREDIT: JEFF ROBERSON – AP PHOTO 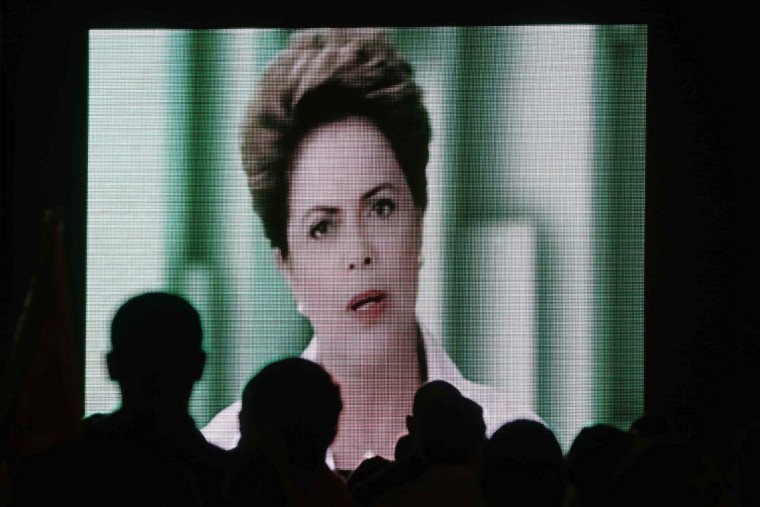 Militants of the Workers Party watch a speech by Brazil’s President Dilma Rousseff, which was broadcast on the Workers Party’s television program, in Brasilia, Brazil, Thursday, Aug. 6, 2015. A new poll shows Rousseff’s approval rating at a new low and the number of people favoring her impeachment growing. || CREDIT: ERALDO PERES – AP PHOTO 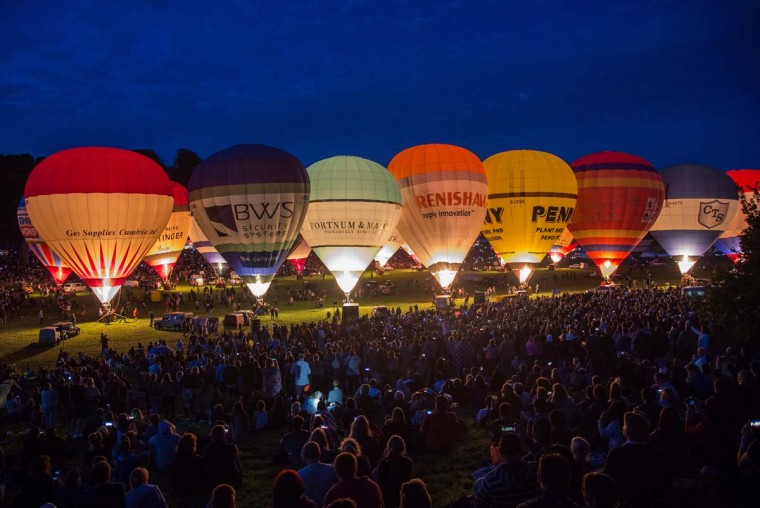 Crowds watch as tethered balloons are illuminated by their burners during the night glow evening event on the first day of the Bristol International Balloon Fiesta at the Ashton Court estate on August 6, 2015 in Bristol, England. Now in its 37th year, the Bristol International Balloon Fiesta is Europe’s largest annual hot air balloon event in the city that is seen by many balloonists as the home of modern ballooning. (Photo by Matt Cardy/Getty Images) 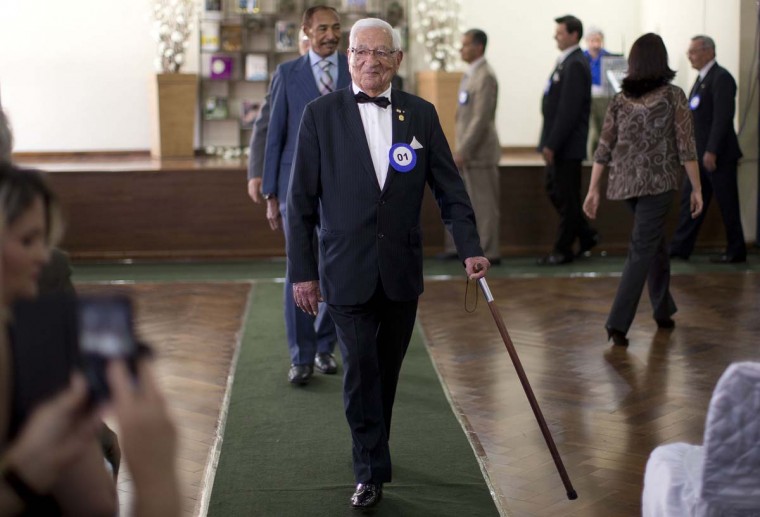 Contestant Abel Jose Nunes, 94, struts on the catwalk during the annual “Most Handsome Elderly Man” contest in Sao Paulo, Brazil, Thursday, Aug. 6, 2015. According to the Sao Paulo Health Secretary, the event intends to provide moments of leisure, raise self-esteem and promote the beauty of the old age. || CREDIT: ANDRE PENNER – AP PHOTO 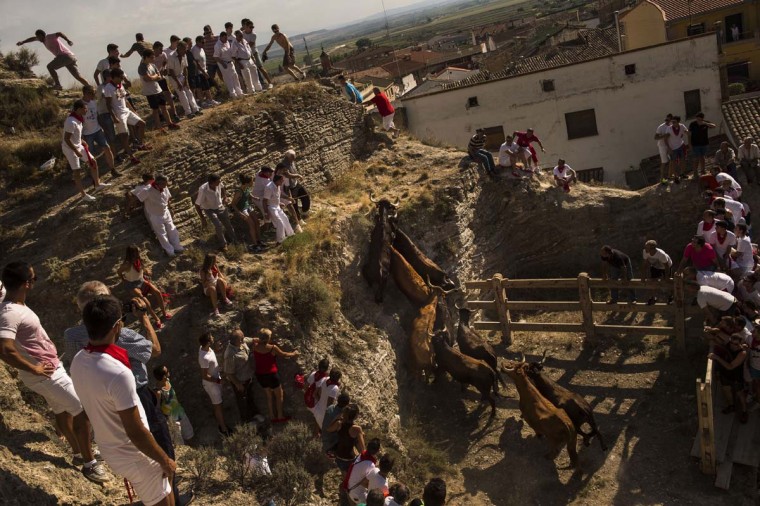 Villagers try to stop cows from walking too far up a slope of a mountain with the intention of sending them back down towards the town of Arguedas, northern Spain, Thursday Aug. 6, 2015. The traditional run during the local fiestas is in honor of the patron saint Esteban. || CREDIT: ALVARO BARRIENTOS – AP PHOTO