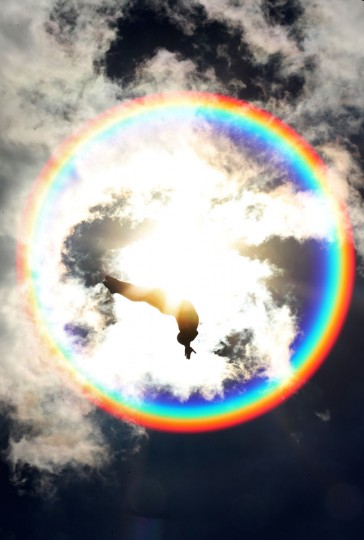 A diver practices on day eleven of the 16th FINA World Championships at the Kazanka River on August 4, 2015 in Kazan, Russia. (Photo by Streeter Lecka/Getty Images) 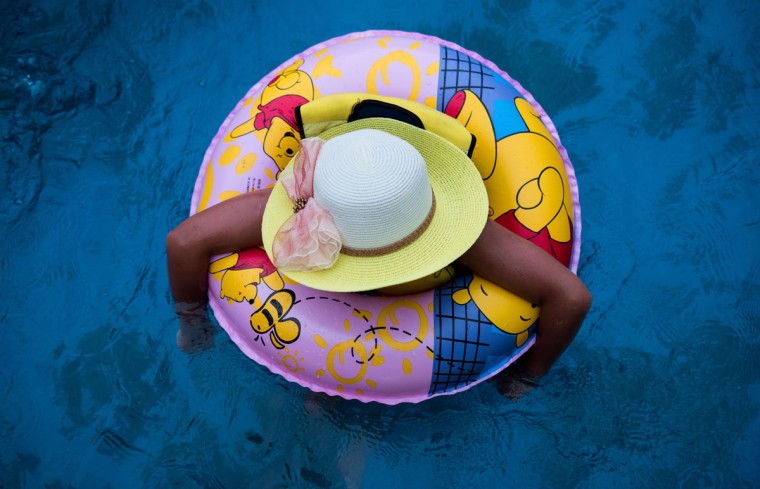 A girl with a swimming ring cools down in a water park in Shanghai on August 5, 2015. Typhoon Soudelor is set to bring an end to the heatwave affecting the region over the weekend, according to local reports. (AFP Photo/Johannes Eisele) 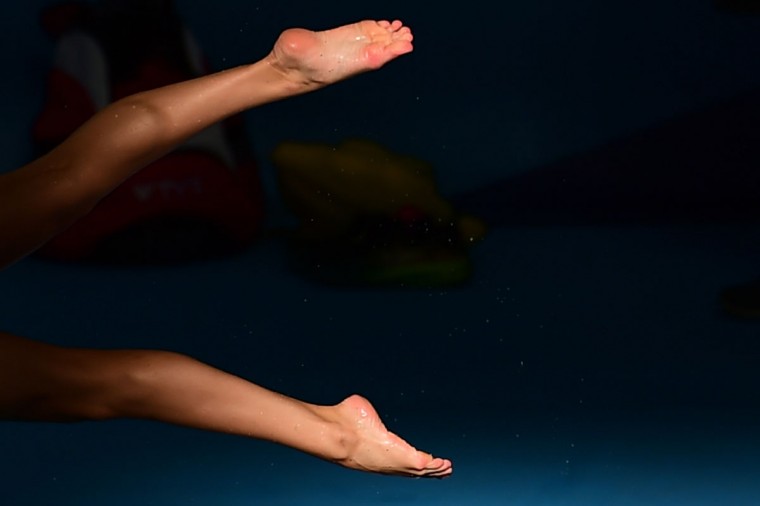 Close up on the legs of an unidentified athlete before the start of the swimming afternoon session at the 2015 FINA World Championships in Kazan on August 5, 2015. (AFP Photo/Christophe Simon) 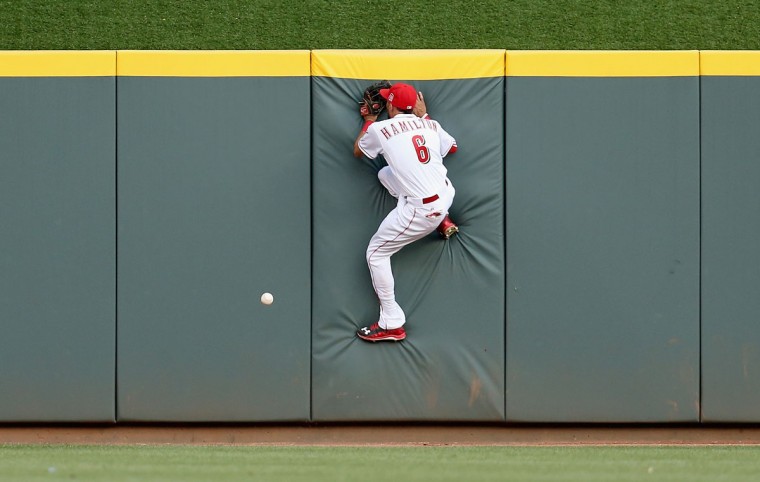 Bily Hamilton #6 of the Cincinnati Reds cannot catch the ball hit by Randal Grichuk of the St. Louis Cardinals that would be a triple in the third inning at Great American Ball Park on August 4, 2015 in Cincinnati, Ohio. (Photo by Andy Lyons/Getty Images) 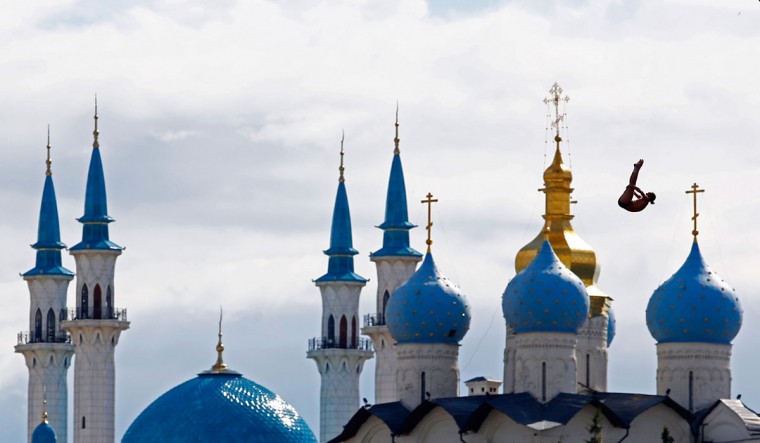 Orlando Duque of Colombia competes in the Men’s 27m High Diving Final on day twelve of the 16th FINA World Championships at the Kanzanka River on August 5, 2015 in Kazan, Russia. (Photo by Clive Rose/Getty Images) 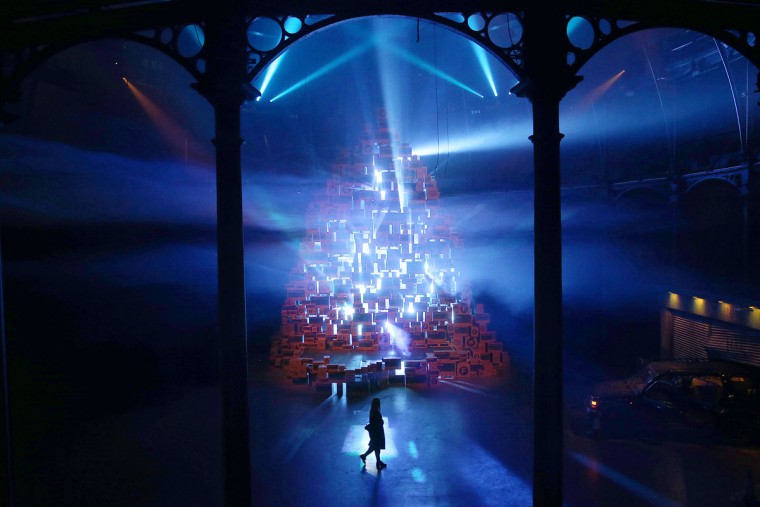 An employee poses next to part of an installation by artist Penny Woolcock entitled ‘Utopia’ at the Roundhouse theatre on August 5, 2015 in London, England. Running from 4th to 23rd August, ‘Utopia’ is a city experienced through imagined environments with narrative soundscapes featuring stories that are pertinent to the parallel lives being lived in the worldÕs biggest cities. (Photo by Carl Court/Getty Images) 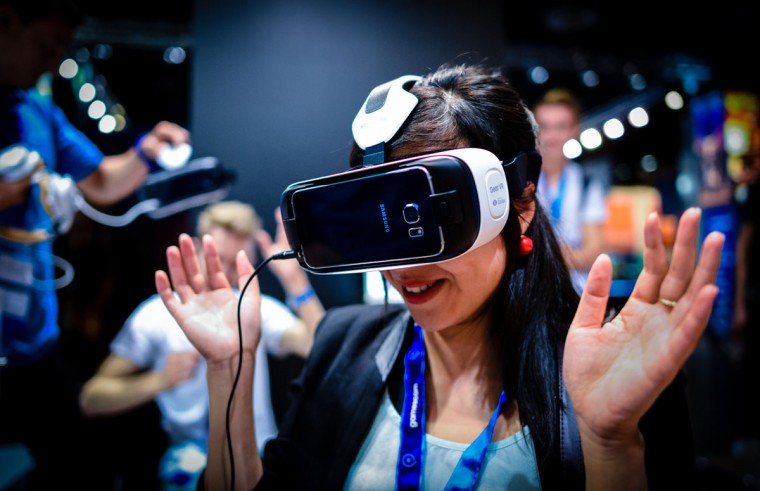 People play video games at the Gamescom 2015 gaming trade fair during the media day on August 5, 2015 in Cologne, Germany. Gamescom is the world’s largest digital gaming trade fair and will be open to the public from August 6-9. (Photo by Sascha Schuermann/Getty Images) 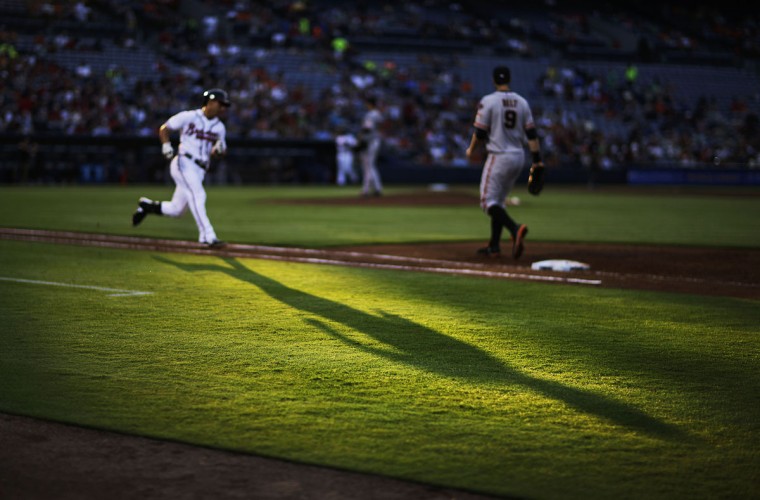 Atlanta Braves’ Daniel Castro casts a shadow on the field as he runs to first base after hitting a single during the third inning of a baseball game against the San Francisco Giants Tuesday, Aug. 4, 2015, in Atlanta. (AP Photo/David Goldman) 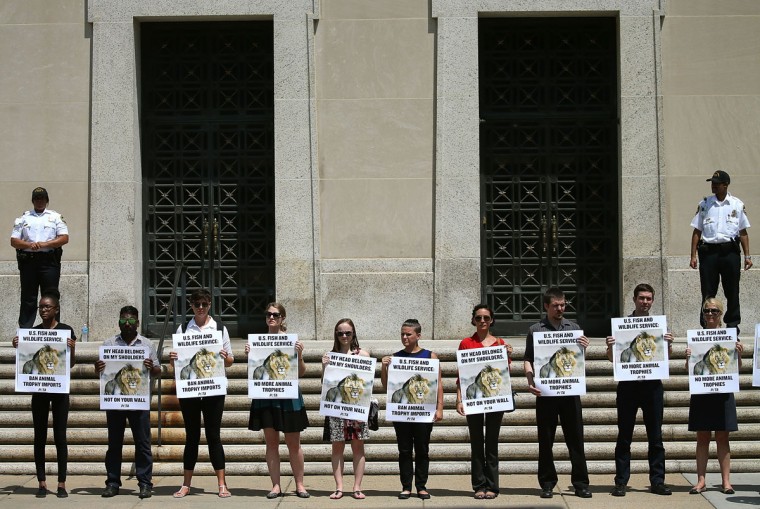 People for the Ethical Treatment of Animals (PETA) protesters hold pictures of Cecil the Lion as they stand in front of the Department of Interior building to protest against the importing of wild game killed as trophies August 5, 2015 in Washington, DC. Peta is calling on the Fish and Wildlife Service to take steps to end cruel trophy hunting by listing lions as a threatened species and banning the importation of their heads, tails, and skins into the U.S. (Photo by Mark Wilson/Getty Images) 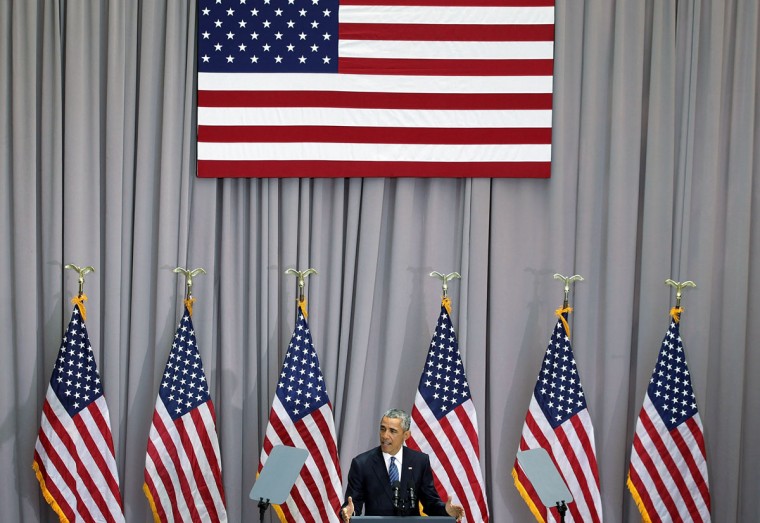 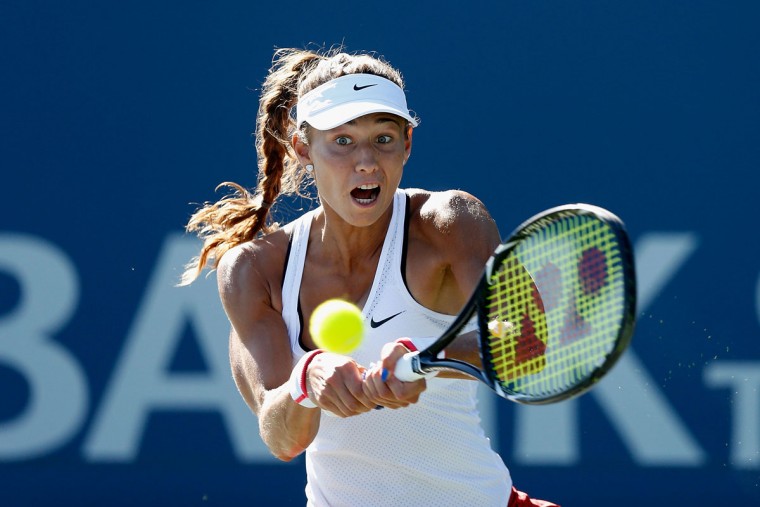 Vitalia Diatchenko of Russia plays against Ajla Tomljanovic of Croatia during day two of the Bank of the West Classic at the Stanford University Taube Family Tennis Stadium on August 4, 2015 in Stanford, California. (Photo by Lachlan Cunningham/Getty Images) 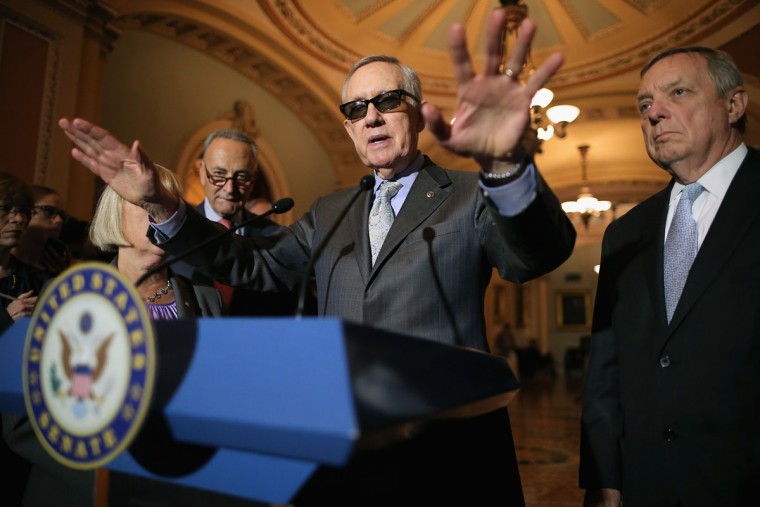 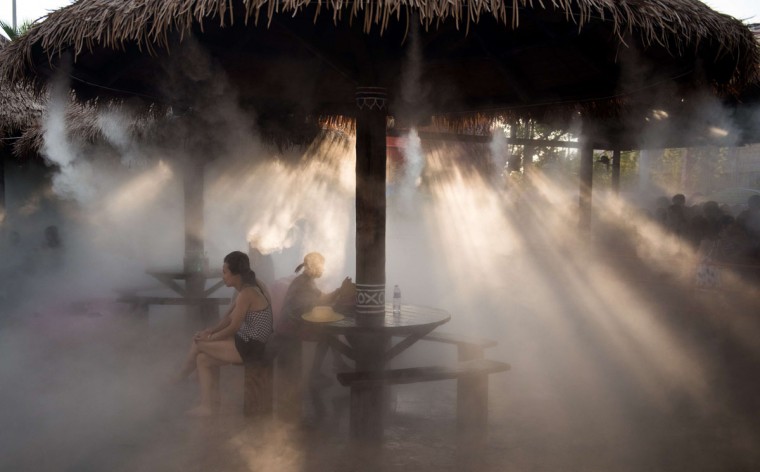 People cool down under a sprinkler in a water park in Shanghai on August 5, 2015. Typhoon Soudelor is set to bring an end to the heatwave affecting the region over the weekend, according to local reports. (AFP Photo/Johannes Eisele) 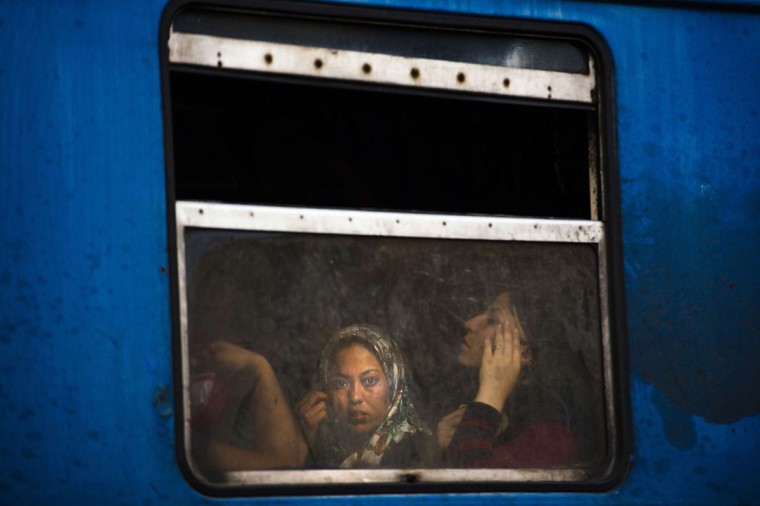 A migrant looks out the window of a train heading to the border with Serbia at the train station in Gevgelija on the Macedonian-Greek border on August 4, 2015. Many migrants try to cross Macedonia and Serbia to enter the European Union via Hungary, a country that will finish building its anti-migrant fence on its southern border with Serbia by August 31, ahead of a previous November deadline. (AFP Photo/Dimitar Dilkoff) 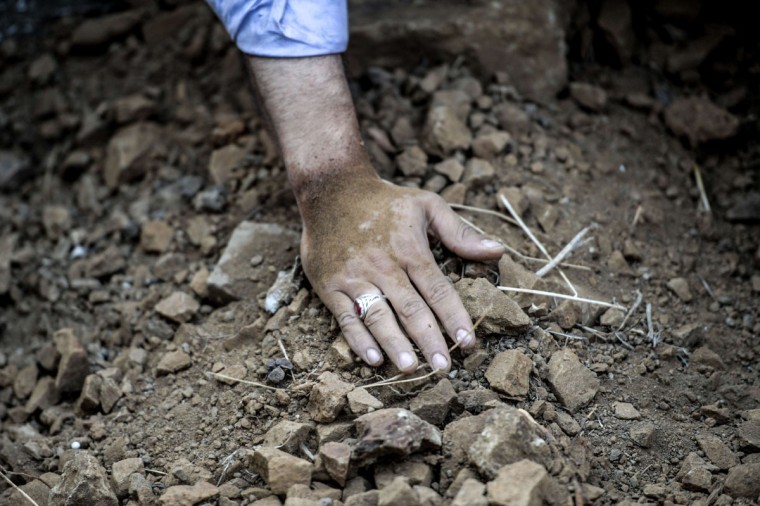 A mourner touches the grave of Vatan Budak, a victim of the suicide bomb attack in Suruc on July 22, during his funeral on August 4, 2015 in Istanbul. Budak died on Monday following his injuries. Turkey vowed on August 3 to pursue its battle against Kurdish militants, who have borne the brunt of almost two weeks of airstrikes while also committing attacks against Turkish forces. (AFP Photo/Ozan Kose) 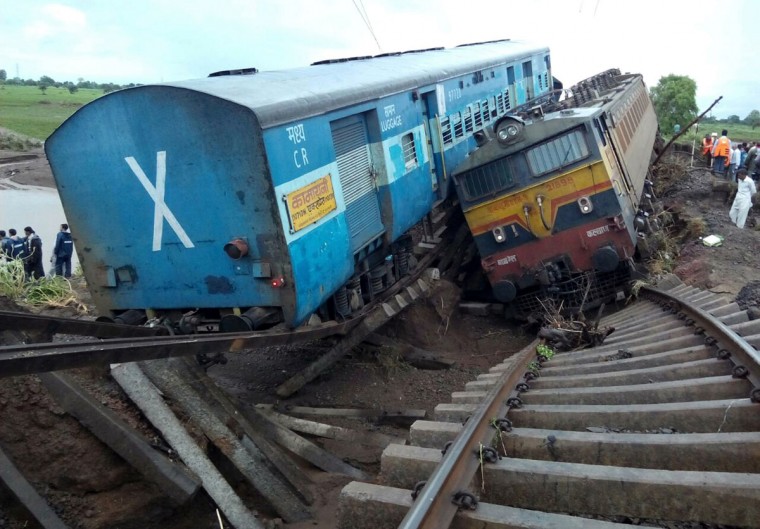 Two Indian passenger trains lay next to each other following a derailment after they were hit by flash floods on a bridge outside the town of Harda in Madhya Pradesh state on August 5, 2015. Two passenger trains derailed after being hit by flash floods on a bridge in central India, killing at least 27 people in the latest deadly accident on the nation’s crumbling rail network. (AFP Photo/P /afp/getty ) 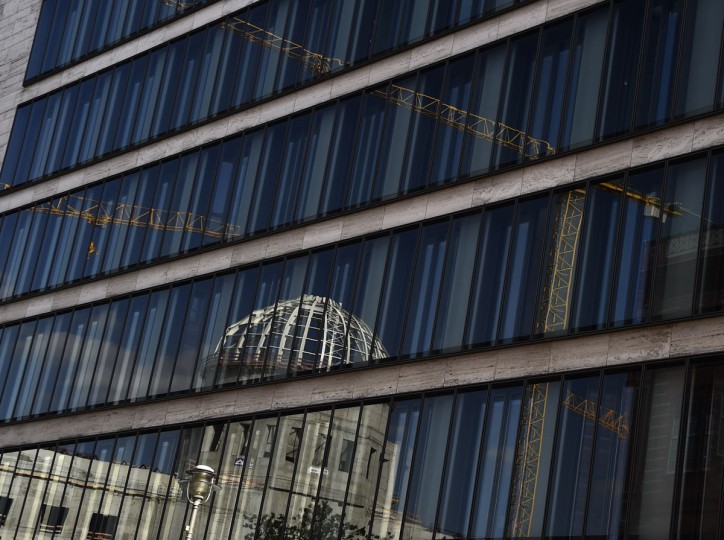 Cranes and the construction site of the ” Berliner Stadtschloss ” or Berlin City Palace, a replica of the former Prussian-era royal palace of the German capital are reflecting on a building on August 5, 2015. From 2019 the Palace will be the home of the Humboldt Forum global cultural collection, at a square where the GDR assembly or ” Palast der Republik ” used to be located not far from TV Tower (L). (AFP Photo/Tobias Schwarz) 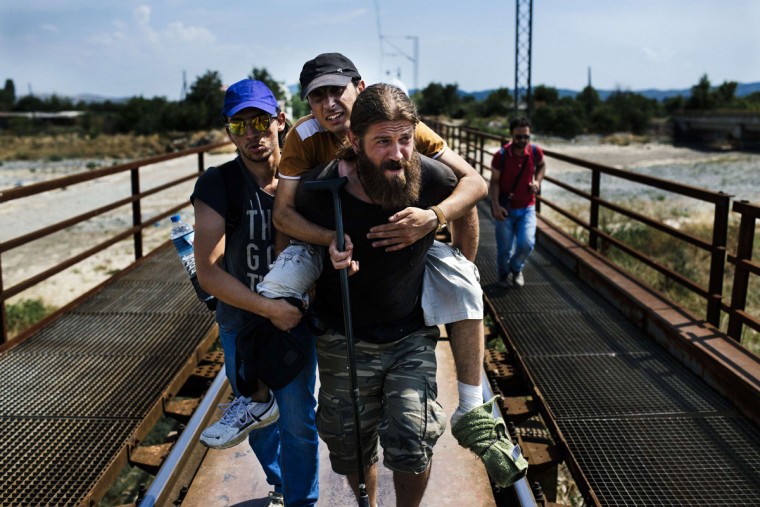 Syrian migrants carry their injured friend as they walk on railway tracks towards the town of Gevgelija on the Macedonian-Greek border on August 5, 2015. Many migrants try to cross Macedonia and Serbia to enter the European Union via Hungary, a country that will finish building its anti-migrant fence on its southern border with Serbia by August 31, ahead of a previous November deadline. (AFP Photo/Dimitar Dilkoff) 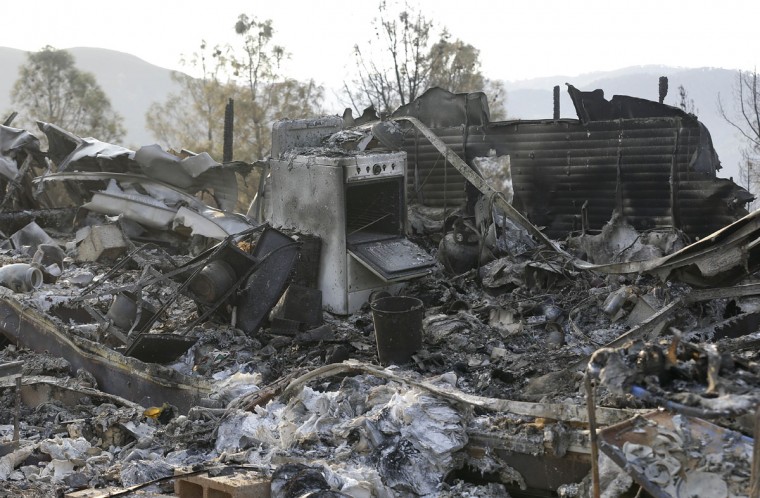 Burned remains of a property is shown near Clearlake, Calif., Wednesday, Aug. 5, 2015. Thousands of firefighters battling an unruly Northern California wildfire were aided overnight by cooler temperatures and higher humidity, but the fire is still less than a quarter contained. (AP Photo/Jeff Chiu) 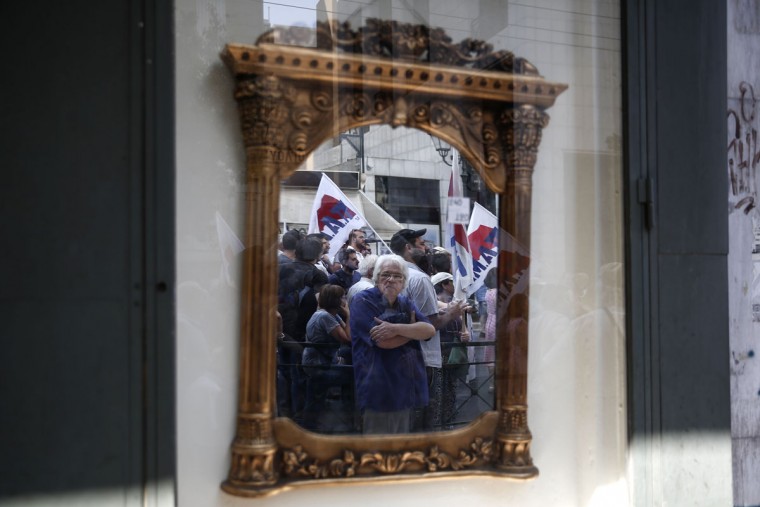 Supporters of the Communist-affiliated PAME labor union are reflected on a mirror as they take part in an anti-austerity rally outside the Labor Ministry in Athens, Greece, on Wednesday, Aug. 5, 2015. Greece’s economy is reeling from the impact of limits on money withdrawals and transfers that the government imposed on June 29 to avoid a collapse of the banking sector. Uncertainty over Greece’s negotiations for a new bailout and over the stability of the government have heightened concerns. (AP Photo/Yorgos Karahalis)

« The Rio Olympics are 1 year away » Now and then: Hiroshima after the atomic bomb and today