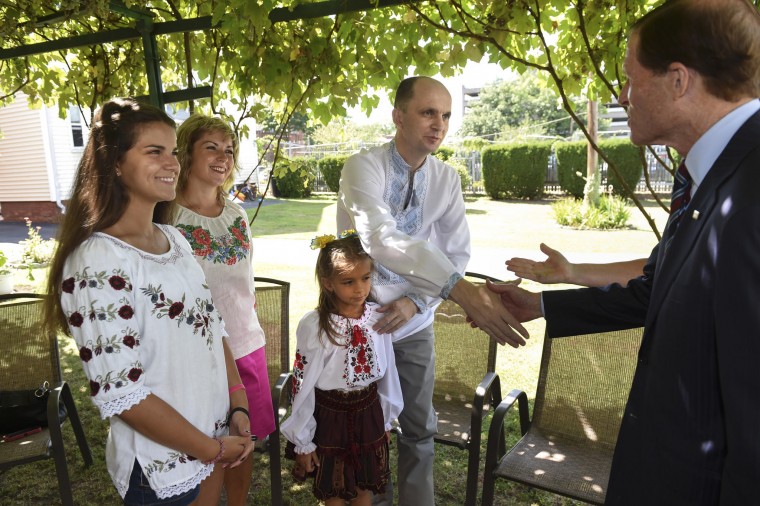 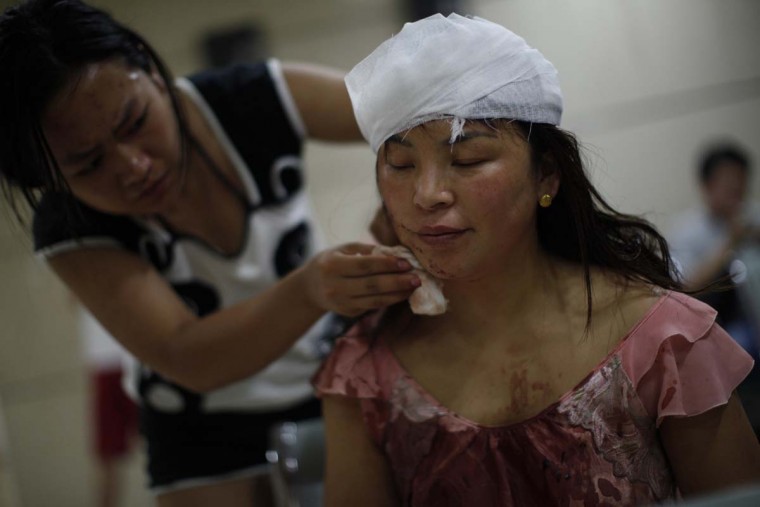 This photo taken on August 13, 2015 shows a woman (L) cleaning the blood on a victim’s face in a hospital in Tianjin. Massive explosions at a chemical storage facility in one of China’s biggest cities killed at least 50 people and injured 700. They also raised fears about toxic chemicals poisoning the air. AFP/Getty Images 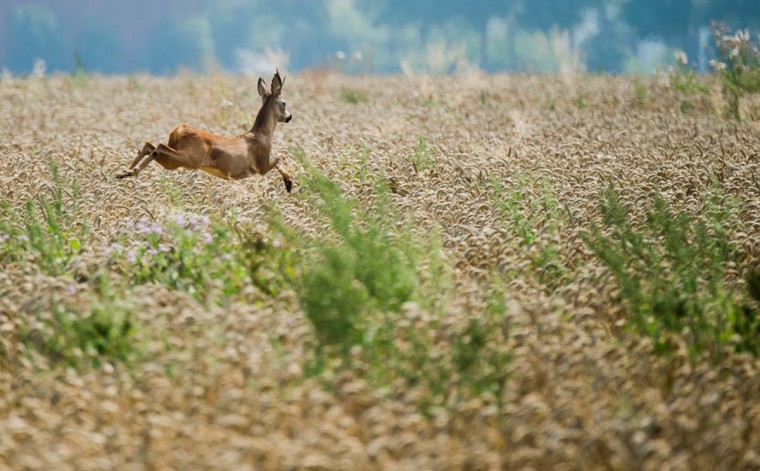 A deer jumps through a cornfield as farmers start the crop with harvesters near Kolshorn in the Hanover region, central Germany, on August 14, 2015.JULIAN STRATENSCHULTE/AFP/Getty Images 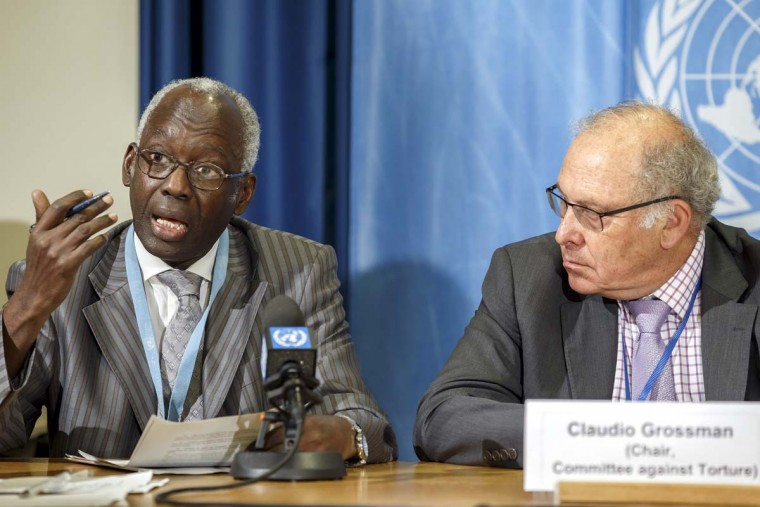 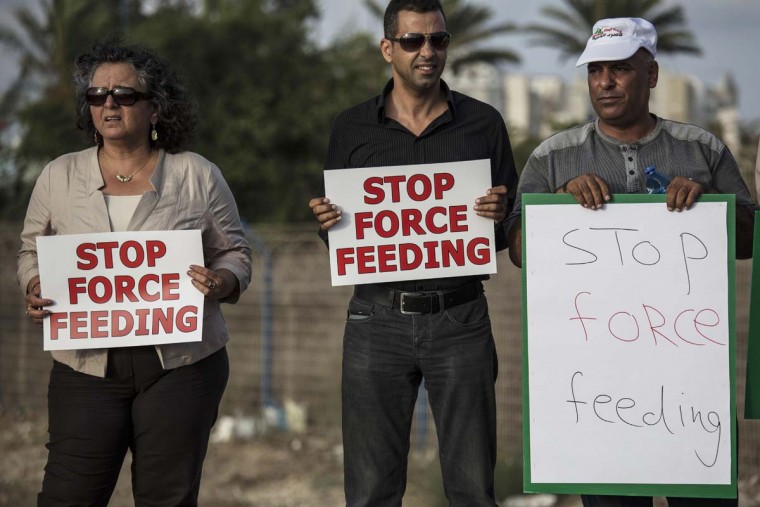 In this photo made on Tuesday, August 11, 2015, Israeli Arab supporters of Mohammed Allan, a Palestinian prisoner on a hunger strike, hold signs during a support rally outside Barzilai hospital, in the costal city of Ashkelon Israel. Israel passed a law to force feed hunger strikers by a slim margin in July and elicited harsh criticism. Critics call force-feeding an unethical violation of patient autonomy and akin to torture. The Israeli Medical Association, which has urged physicians not to cooperate, is challenging the law in the Supreme Court. || CREDIT: TSAFRIR ABAYOV – AP PHOTO 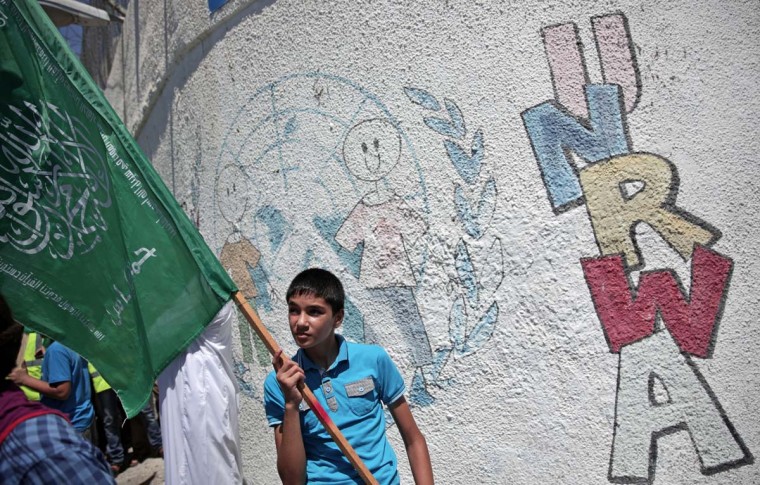 A Palestinian boy holds up a Hamas flag as he demonstrates against a U.N. Relief and Works Agency (UNRWA) funding gap that could keep hundreds of thousands of Palestinian students out of school this fall, outside the UNRWA Gaza Headquarters in Gaza City, Friday, Aug. 14, 2015. The deputy chief of the UNRWA, which operates 700 schools, Sandra Mitchell, said Monday that “if funding does not arrive” this month, the agency could delay the start of the school year. || CREDIT: KHALIL HAMRA – AP PHOTO 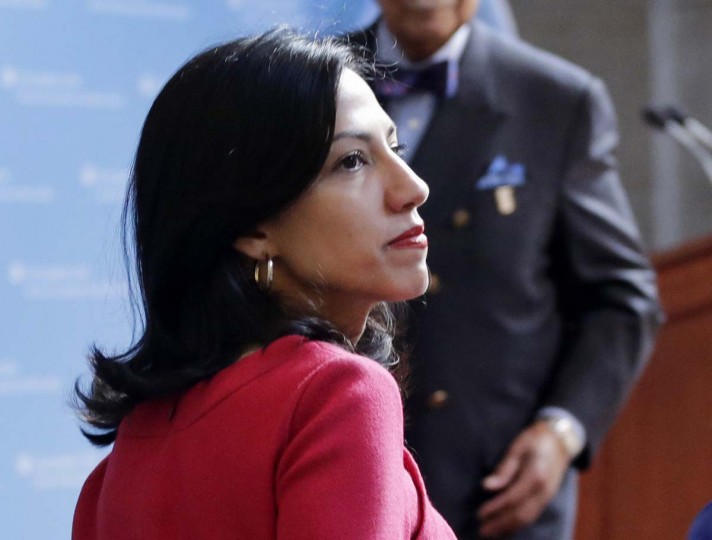 In this April 29, 2015 file photo, Huma Abedin is seen in New York. Two aides to former Secretary of State Hillary Rodham Clinton say they’ve agreed not to delete any work-related emails. The pledges from Huma Abedin and Cheryl Mills are in response to a federal judge’s order that they preserve their records. || CREDIT: MARK LENNIHAN, FILE – AP PHOTO 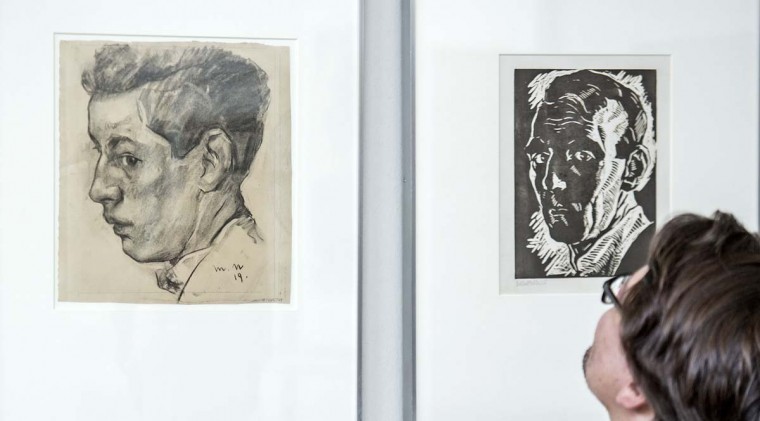 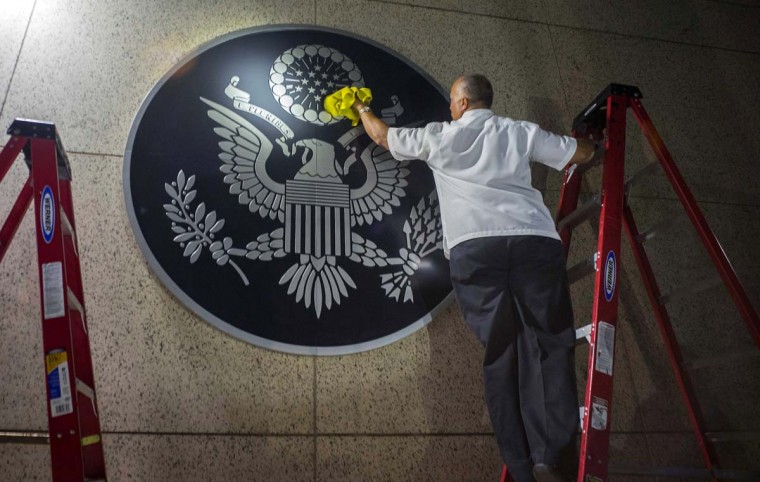 A worker wipes a representation of the The Great Seal of the United States at the newly opened U.S. Embassy in Havana, Cuba, Friday, Aug. 14, 2015. U.S. Secretary of State John Kerry arrived Friday morning in Havana for an historic ceremony to raise the U.S. flag over the restored U.S. Embassy in the Cuban capital. || CREDIT: RAMON ESPINOSA – AP PHOTO 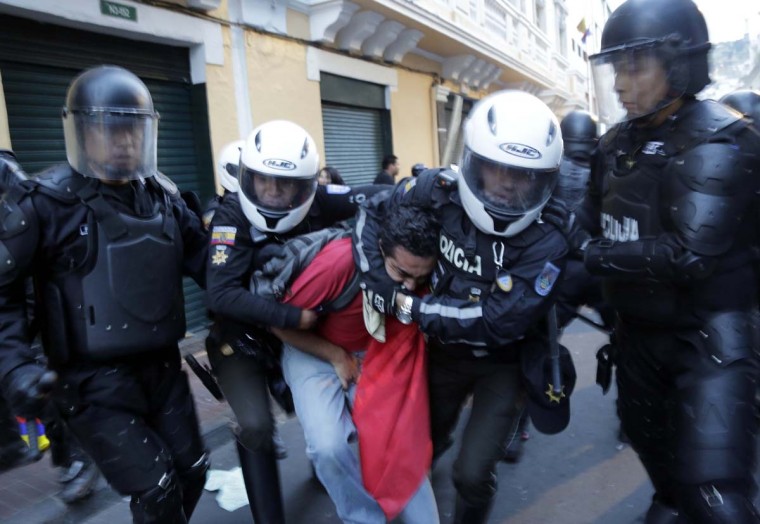 Police detain a man during clashes near the government palace in Quito, Ecuador, Thursday, Aug. 13, 2015. A strike by a broad coalition upset with President Rafael Correa virtually paralyzed the capital, provincial cities and stretches of the Panamerican highway. The protesters are indigenous activists, unionists, environmentalists and members of the traditional political opposition. || CREDIT: DOLORES OCHOA – AP PHOTO 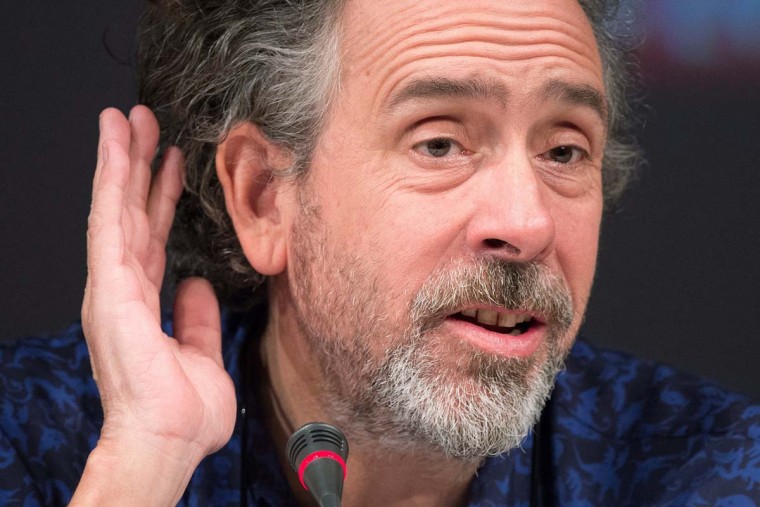 US director Tim Burton attends a press conference on the show “The World of Tim Burton” at the Max-Ernst-Museum in Bruehl, western Germany, on August 14, 2015. The exhibition, running from August 16, 2015 to January 3, 2016 presents around 500 drawings, paintings, sculptures, photos, storyboards and personal documents of the artist. MARIUS BECKER – AFP/Getty Images 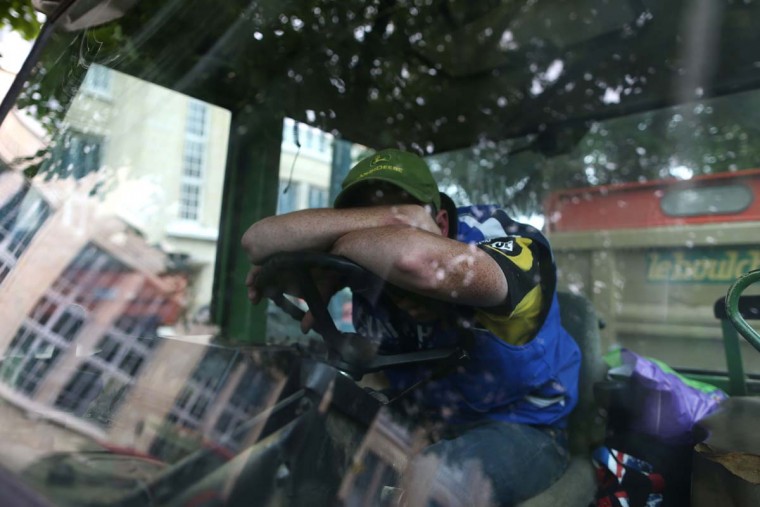 A farmer sleeps in his tractor after a night spent in front of the Calvados prefecture in the Caen region of Northern France, during a demonstration of farmers, on August 14, 2015. Some 100 farmers demonstrated in Caen threatening to dump trash, according to police, ahead of a technical meeting at the prefecture in which the farmers requested the presence of dairy, slaughterhouse and food suppliers’ representatives. || CREDIT: CHARLY TRIBALLEAU – AFP/GETTY IMAGES 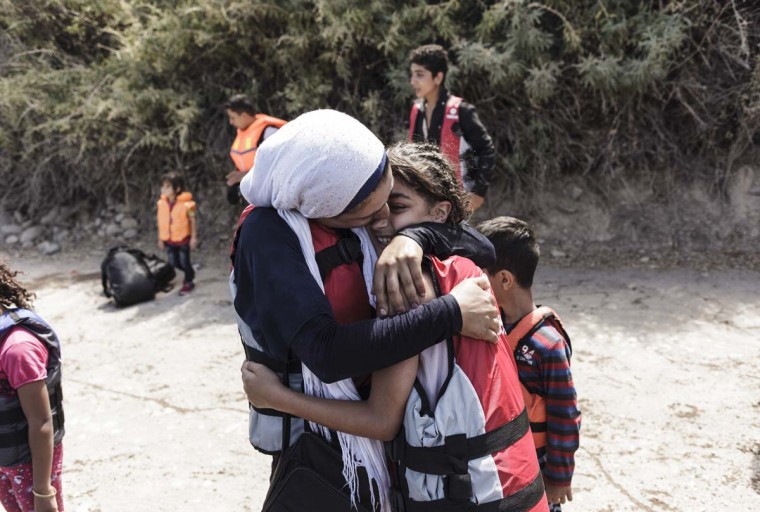 Newly arrived migrants hug moments after arriving on the shores of the Greek island of Lesbos after crossing the Aegean sea from Turkey to Greece on August 14, 2015. Turkish efforts to stop traffickers from sending large “ghost ships” crammed with migrants towards Italy has sparked the surge in arrivals in Greece, the International Organization for Migration said on August 13. The migrants and refugees making the perilous journey across the Mediterranean to Europe are increasingly travelling the eastern route from Turkey to the Greek islands, which have seen more arrivals since the beginning of the year than long-time top destination Italy, according to UN figures. || CREDIT: ACHILLEAS ZAVALLIS – AFP/GETTY IMAGES 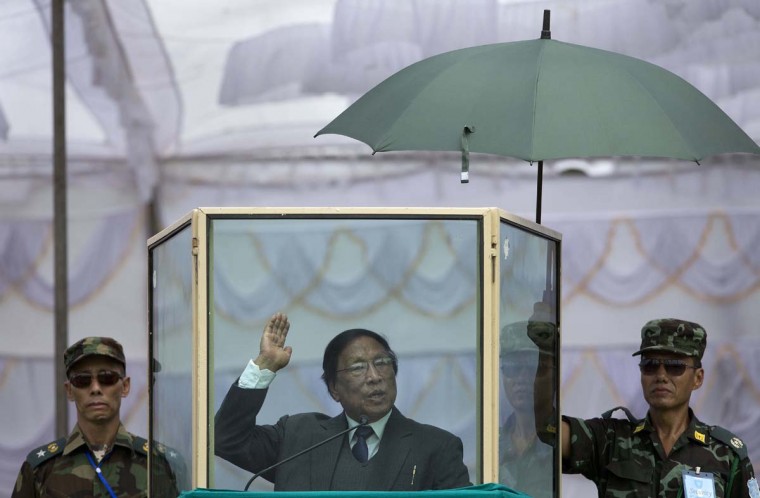 Thuingaleng Muivah, leader of the Isak-Muivah faction of the National Socialist Council of Nagaland, delivers a speech during Independence Day celebrations at the councilís headquarters in Hebron, in Indiaís north eastern state of Nagaland, Friday, Aug. 14, 2015. Muivah, leader of a key rebel group in the country’s insurgency-wracked northeast, returned to Nagaland Wednesday after signing a peace treaty with India’s government on August 3, 2015. || CREDIT: ANUPAM NATH – AP PHOTO 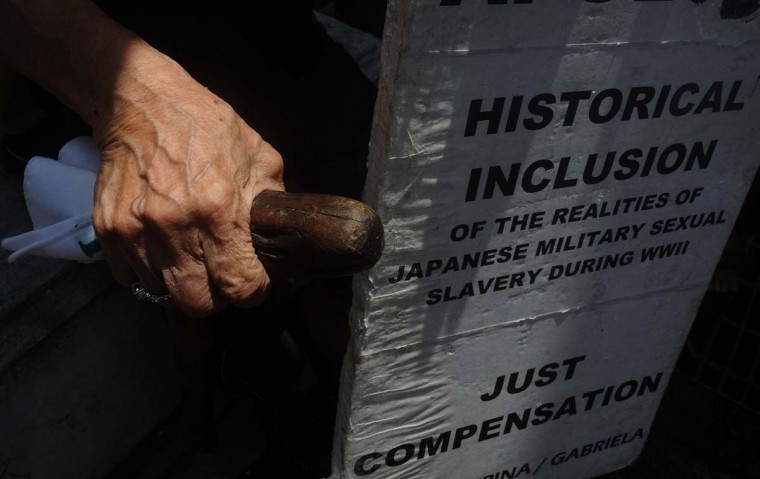 An elderly Filipino woman, holding her cane and a placard, attends a protest during a rally by former sex slaves of the Japanese Imperial Army in front of the Japanese Embassy in Manila on August 14, 2015. Filipino “comfort women” calls for an official apology from the Japanese government and just compensation as the world commemorate the 70th anniversary of the end of World War II on August 15. || CREDIT: JAY DIRECTO – AFP/GETTY IMAGES 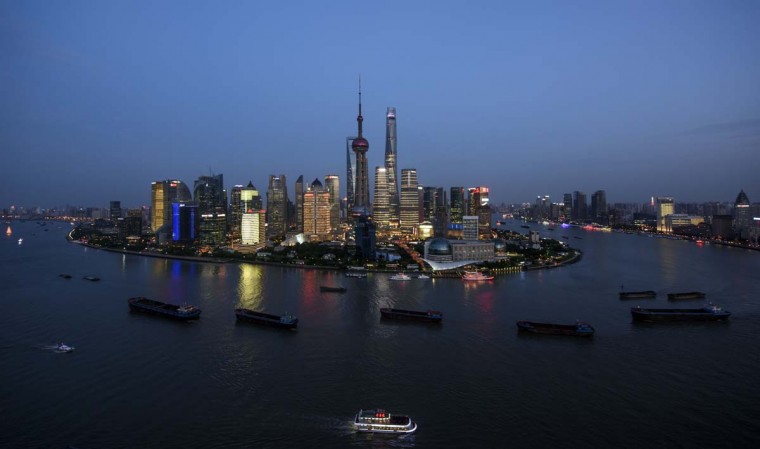 Ships pass by the skyline of the Lujiazui Financial District in Pudong in Shanghai on August 14, 2015. || CREDIT: JOHANNES EISELE – AFP/GETTY IMAGES