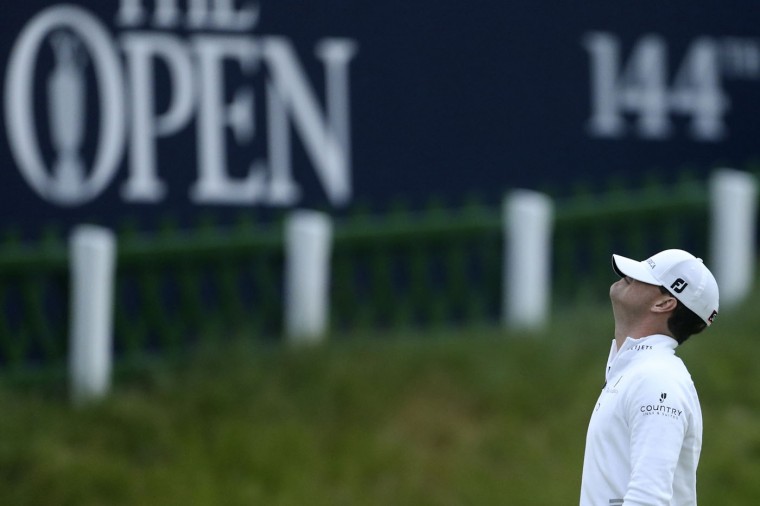 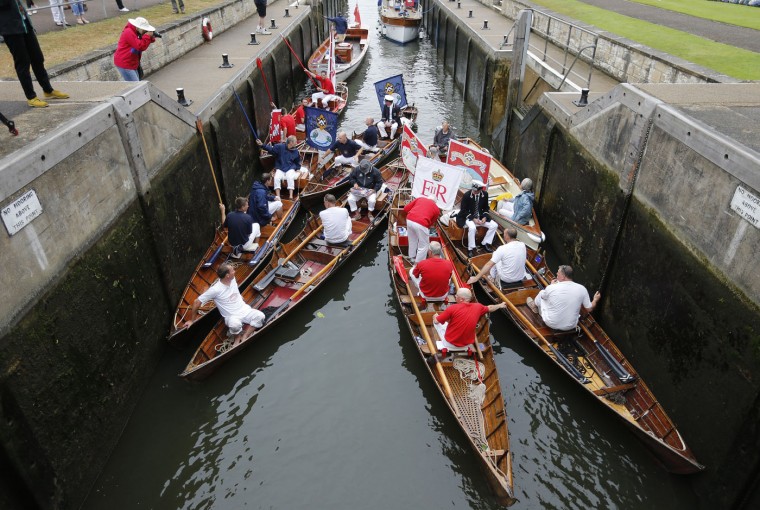 Boats gather at Shepperton lock during the annual count of the Queen’s swans on the river Thames in Middlesex in Staines on Thames, Monday, July 20, 2015.(AP Photo/Frank Augstein) 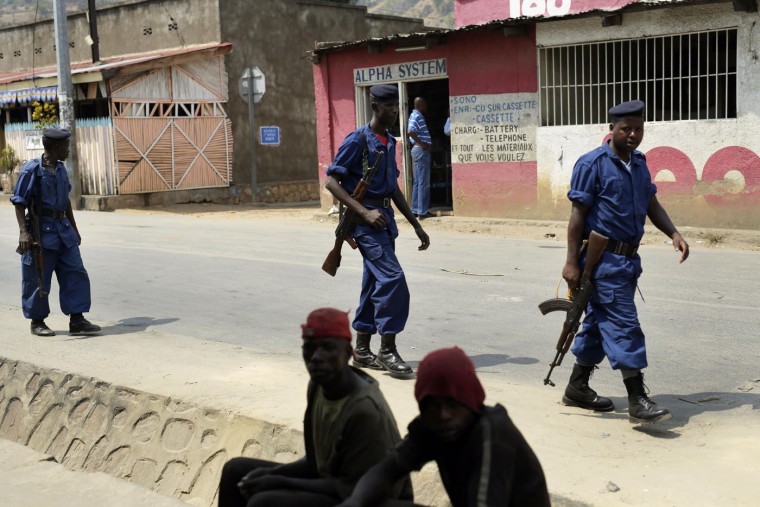 Policemen patrol the Musaga district of Bujumbura, Burundi, Monday July 20, 2015. Government representatives failed to show up Sunday for talks in Burundi aimed at ending the unrest caused by the president’s controversial bid for a third term, forcing the mediation to be adjourned just ahead of Tuesday’s election, the talks facilitator said. Burundi has been rocked by violence that has left more than 100 people dead. Over 144,000 people have fled the country since the ruling party announced President Pierre Nkurunziza’s candidacy in April. (AP Photo/Jerome Delay) 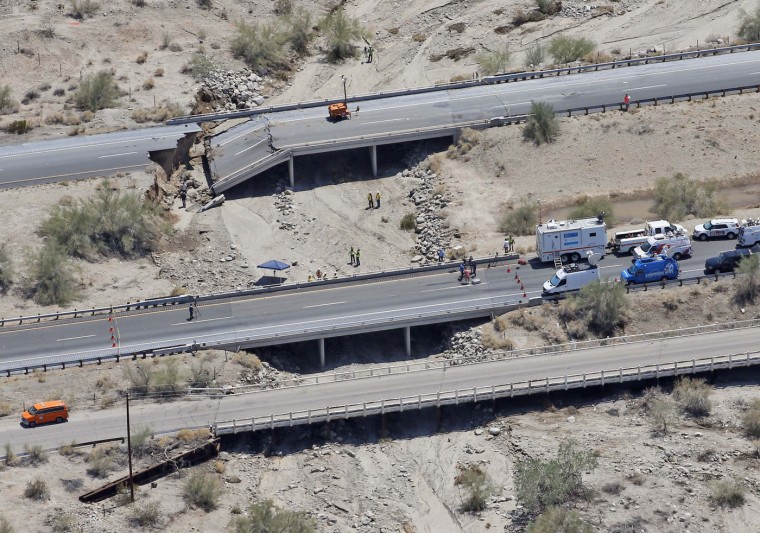 This aerial photo shows the collapsed elevated section of Interstate 10, Monday, July 20, 2015, in Desert Center, Calif. All traffic along one of the major highways connecting California and Arizona was blocked indefinitely when the bridge over a desert wash collapsed during a major storm, and the roadway in the opposite direction sustained severe damage. (AP Photo/Matt York) 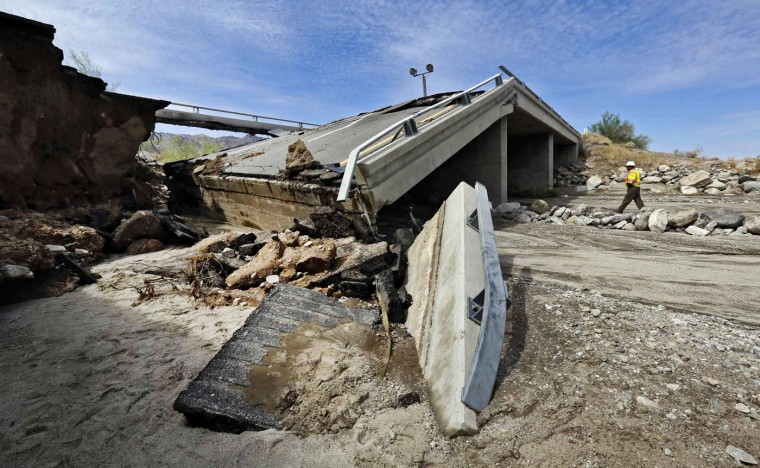 A worker walks near a washed-out bridge near the town of Desert Center, along Interstate 10 in Southern California, on Monday, July 20, 2015. All traffic along one of the major highways connecting California and Arizona was blocked indefinitely when the bridge over a desert wash collapsed during a major storm, and the roadway in the opposite direction sustained severe damage. (AP Photo/Nick Ut) 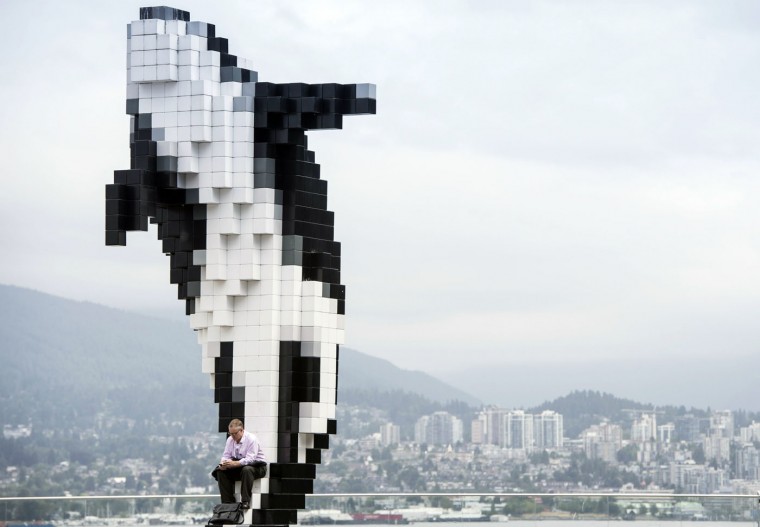 A man sits at the base of an orca statue in downtown Vancouver, British Columbia, Monday, July 20, 2015. (Jonathan Hayward/The Canadian Press via AP) 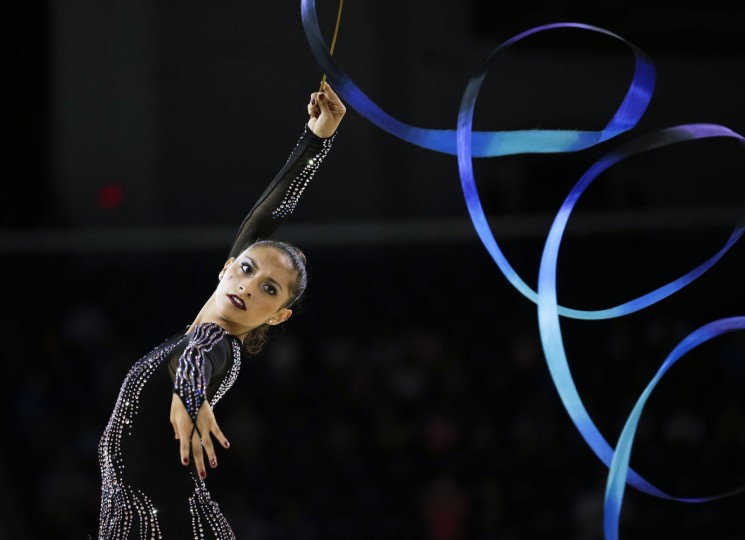 Mexico’s Karla Diaz performs during the during the rhythmic gymnastics ribbon competition in the Pan Am Games in Toronto Monday, July 20, 2015. (AP Photo/Gregory Bull) 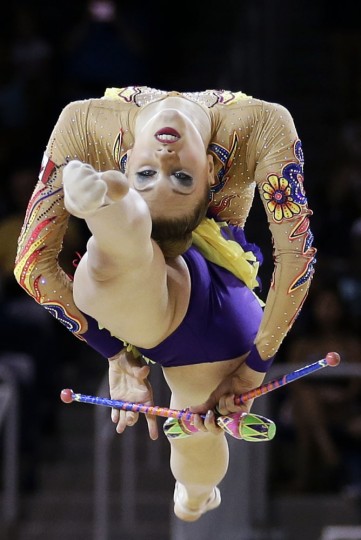 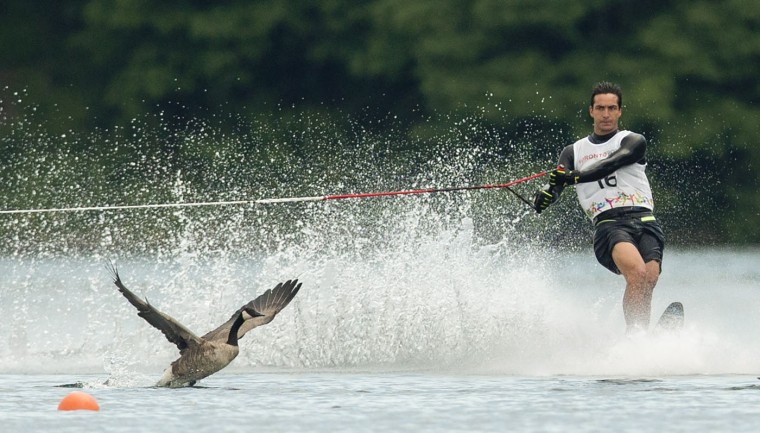 Chile’s Felipe Miranda is interrupted by a goose during the men’s waterski slalom preliminary round at the Pan Am Games in Toronto, Monday July 20, 2015. Miranda was able to re-do his run as the geese interfered with his run. (Mark Blinch/The Canadian Press via AP) 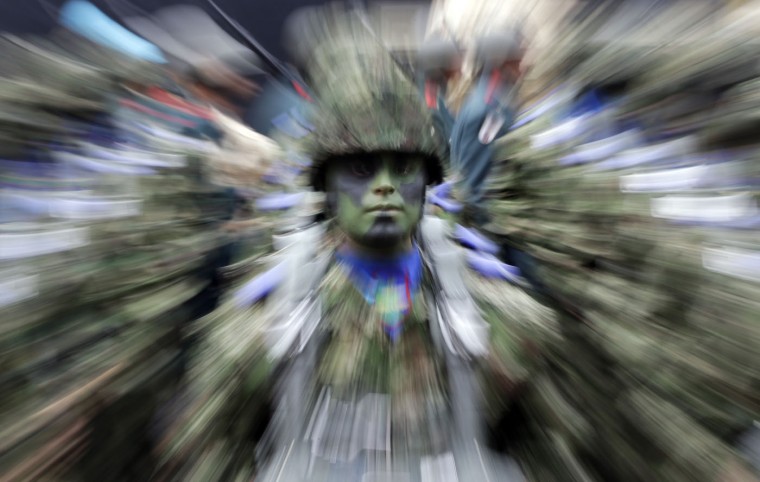 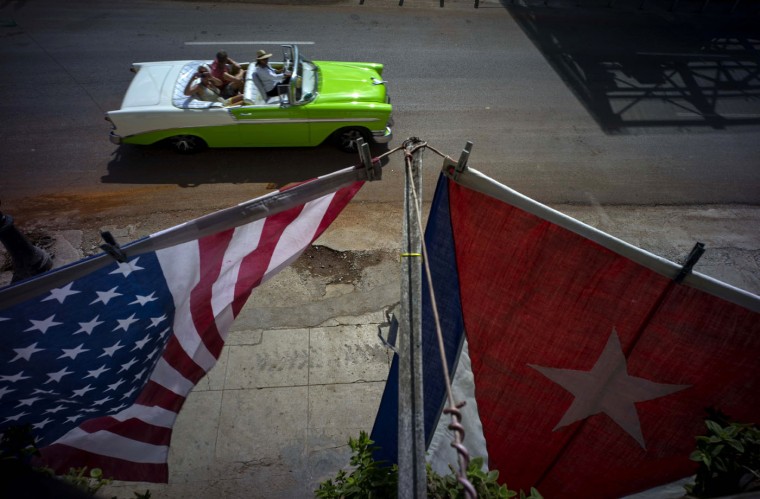 A U.S., and a Cuban national flag, hang from a balcony to mark the restored full diplomatic relations between Cuba and the Unites States, in Old Havana, Monday, July 20, 2015. The new era began with little fanfare when an agreement between the two nations to resume normal ties on July 20 came into force just after midnight Sunday and the diplomatic missions of each country were upgraded from interests sections to embassies. (AP Photo/Ramon Espinosa) 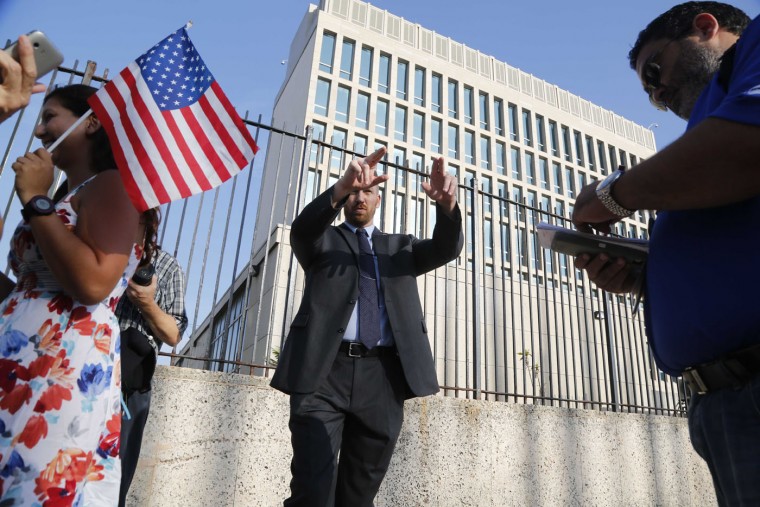 An employee of the United States Embassy Havana asks pedestrians to move back and away from the embassy gates, Monday, July 20, 2015. The U.S. Interests Section in Havana plans to announce its upgrade to embassy status in a written statement on Monday, but the Stars and Stripes will not fly at the mission until Secretary of State John Kerry visits in August for a ceremonial flag-raising. (AP Photo/Desmond Boylan) 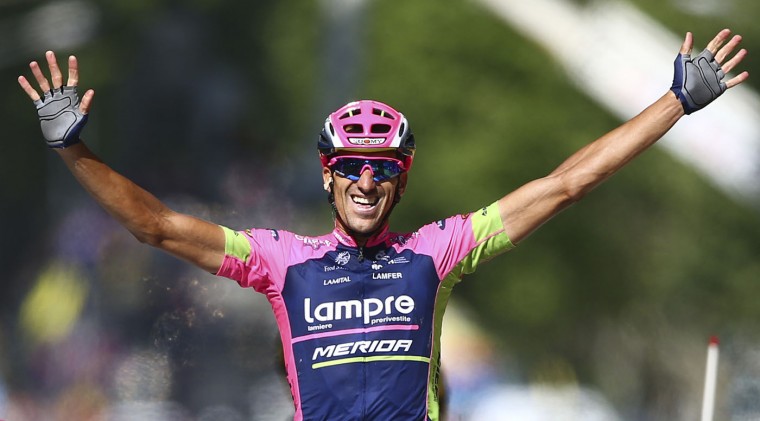 Spain’s Ruben Plaza Molina celebrates as he crosses the finish line to win the sixteenth stage of the Tour de France cycling race over 201 kilometers (124.9 miles) with start in Bourg-de-Peage and finish in Gap, France, Monday, July 20, 2015. (AP Photo/Peter Dejong) 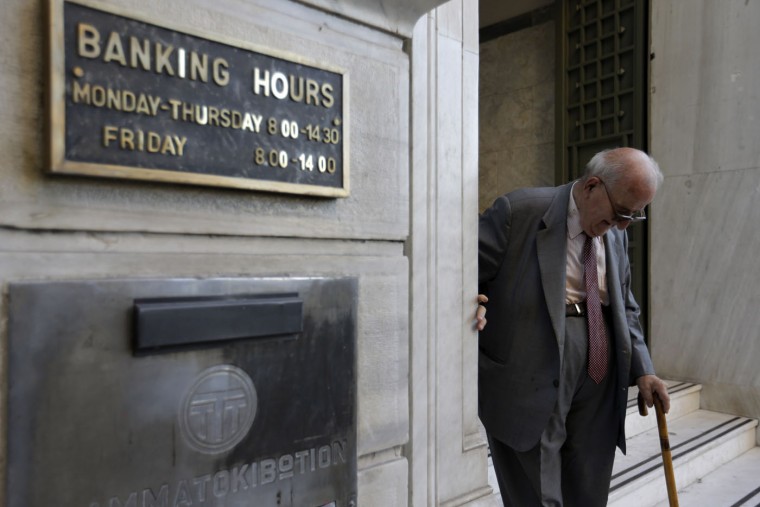 An elderly man leaves a branch of the National Bank of Greece in Athens, Monday, July 20, 2015. Greek banks reopen on Monday morning, but many restrictions on transactions, including cash withdrawals, will remain. Also, many goods and services will become more expensive as a result of a rise in Value Added Tax approved by Parliament last Thursday, among the first batch of austerity measures demanded by Greece’s creditors. (AP Photo/Thanassis Stavrakis) 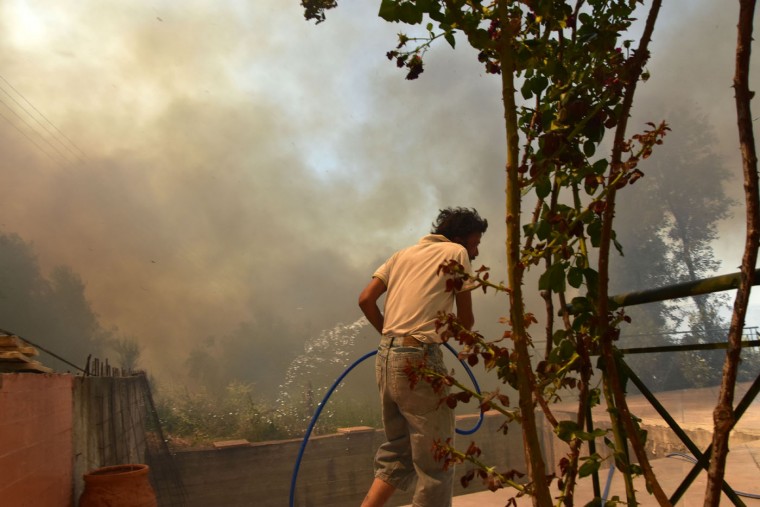 A man tries to extinguish flames as the fire approaches a house at the holiday resort village of Asini, near the town of Nafplio, about 140km (87 miles) southwest of Athens on Monday, July 20, 2015. A 47-year-old policeman was identified as the victim of a fire in a wooded area east of Greek capital on Sunday as firefighters were battling with dozens of fires around Greece the last four days. Foreign forces support Greek firefighters following Prime Minister Alexis Tsipras’ request for help. (AP Photo/Vangelis Bougiotis) 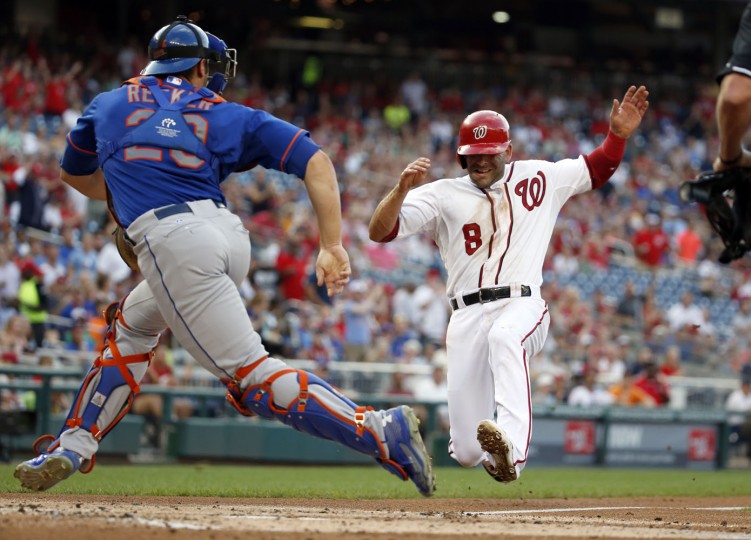 Washington Nationals’ Danny Espinosa (8) scores on a single by Yunel Escobar as New York Mets catcher Anthony Recker (20) goes for the throw during the first inning of a baseball game at Nationals Park, Monday, July 20, 2015, in Washington. (AP Photo/Alex Brandon) 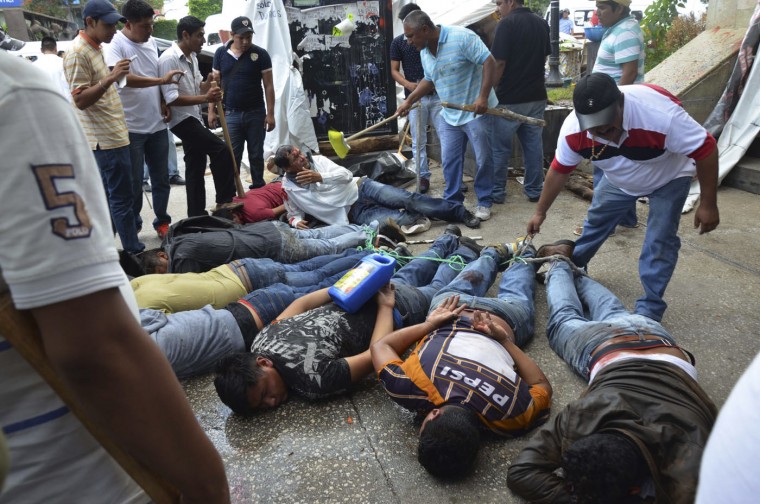 Captured men lie face down and tied up after rival taxi unions fighting for permits clashed in the city of Chilpancingo, Mexico, Monday, July 20, 2015. Several taxi drivers were injured and dozens of vehicles were destroyed. (AP Photo/Alejandrino Gonzalez) 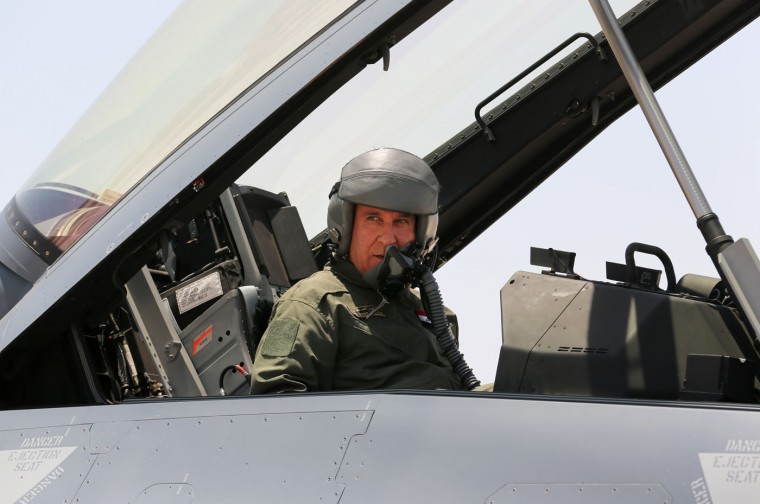 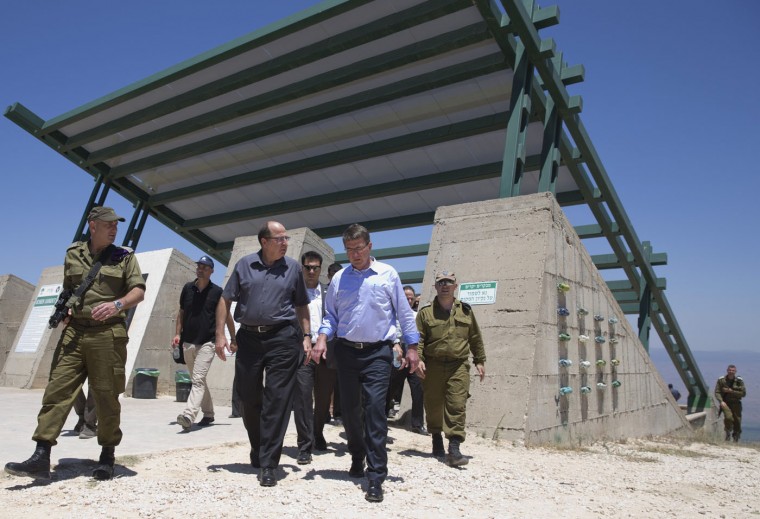 Israel Defense Forces (IDF) 91st Division Commander Moni Katz, left, Israeli Defense Minister Moshe Ya’alon, third from left, and U.S. Defense Secretary Ash Carter, second from right, walk from viewing Hula Valley from the Hussein Lookout, near Kiryat Shmona, Israel, Monday, July 20, 2015, in northern Israel along the boarder with Lebanon. Carter said he has no expectation of persuading Israeli leaders to drop their opposition to the Iran nuclear deal, but will instead emphasize that the accord imposes no limits on what Washington can do to ensure the security of Israel and U.S. Arab allies. (AP Photo/Carolyn Kaster, Pool) 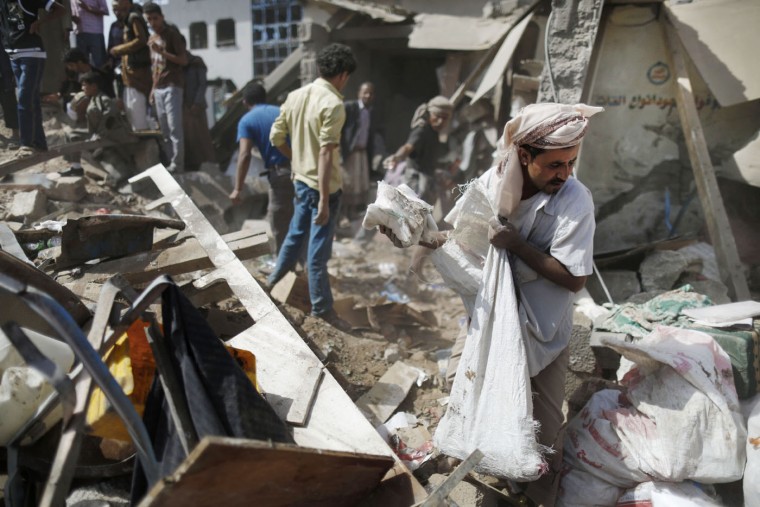 A vendor salvages goods from the rubble of his shop destroyed by a Saudi-led airstrike at a market in Sanaa, Yemen, Monday, July 20, 2015. The death toll in Yemen from the Shiite rebel shelling of a town near the southern port city of Aden rose on Monday to nearly 100, the head of an international aid group said, describing it as “the worst day” for the city and its surroundings in over three months of fighting. (AP Photo/Hani Mohammed) 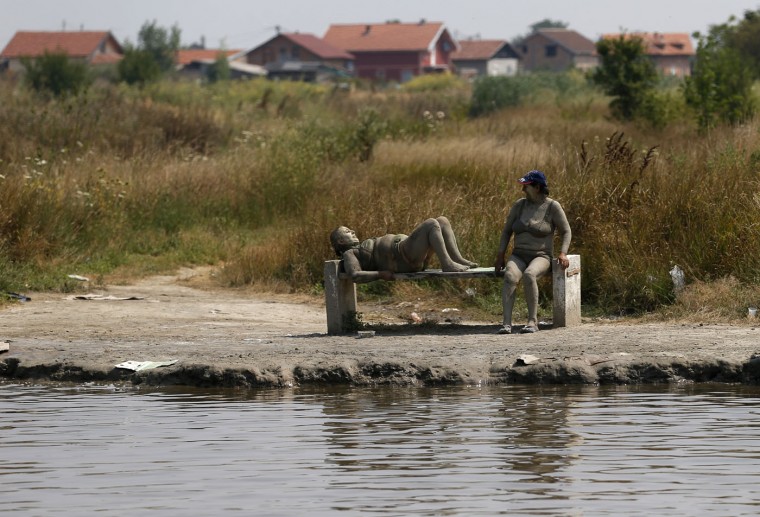 People covered in medicinal mud sunbathe next to a small mineral spring pool in Ovca, suburb of Belgrade, Serbia, Monday, July 20, 2015. Hot weather has set in with temperatures rising up to 38 Celsius (100.4 Fahrenheit) in Belgrade. (AP Photo/Darko Vojinovic) 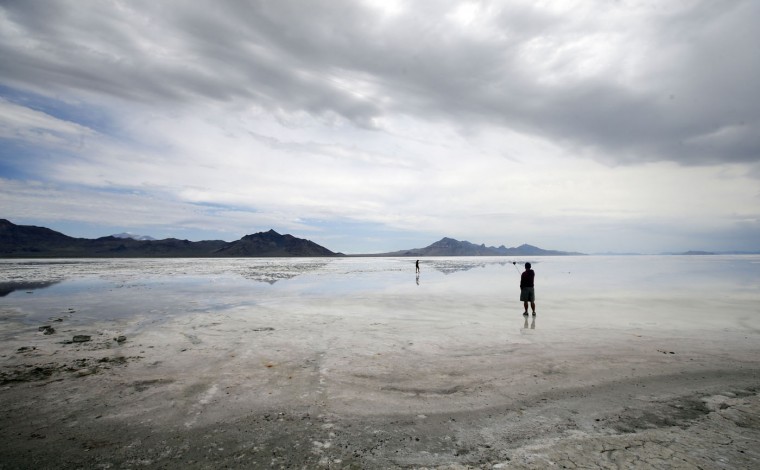 This Saturday, July 18, 2015, photo, shows visitors walking on the Bonneville Salt Flats, in Utah. The Speed Week races that draw hundreds of racing teams from around the world to Utah’s famous salt flats have been canceled for the second consecutive year because of wet conditions. The event organizers announced the cancellation Monday, July 20, of an event that was scheduled to start Aug. 8. (AP Photo/Rick Bowmer) 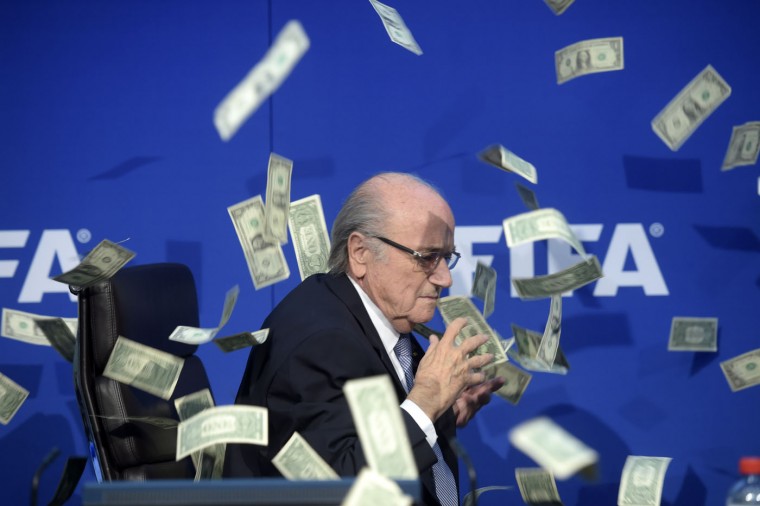 FIFA president Sepp Blatter is photographed while banknotes thrown by British comedian Simon Brodkin hurtle through the air during a press conference following the extraordinary FIFA Executive Committee at the headquarters in Zurich, Switzerland, Monday, July 20, 2015. During the extraordinary FIFA Executive Committee meeting the agenda for the elective Congress for the FIFA presidency was finalized and approved: The congress will take place on Feb. 26. 2016. (Ennio Leanza/Keystone via AP) 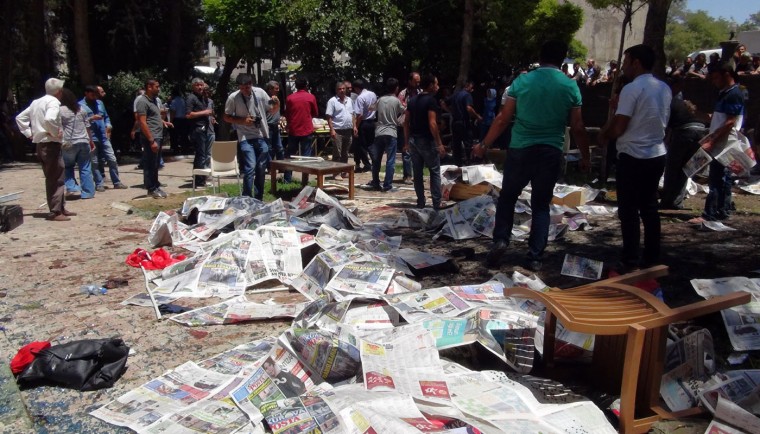 Dead bodies are covered by newspapers at the site of an explosion that killed tens of people and injured scores others is seen in the southeastern Turkish city of Suruc near the Syrian border, Turkey, Monday, July 20, 2015. A midday explosion in Turkeys southeastern city of Suruc near the Syrian border killed 28 people Monday and sent nearly 100 others to the hospital, Turkish officials said. The prime ministers office gave the casualty toll in a phone call to The Associated Press. There was no immediate claim of responsibility for the blast. (AP Photo) 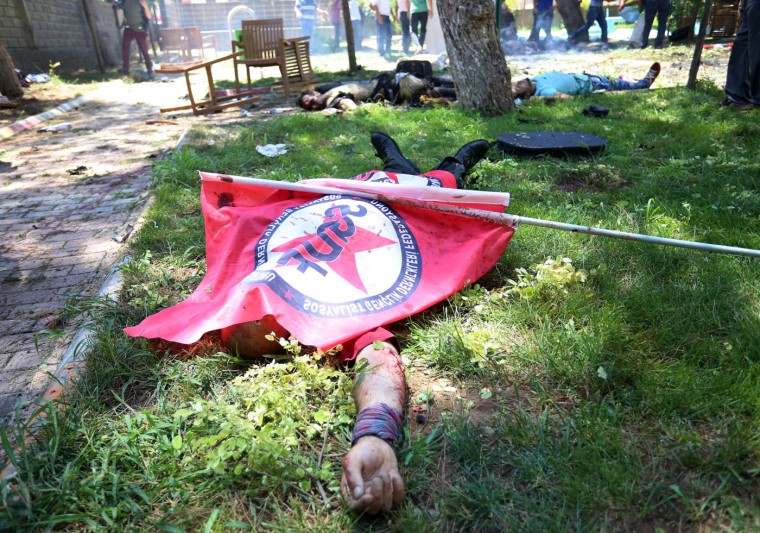