This time of year the nation celebrates the birth of the United States of America. The country is awash in red, white and blue, the colors of the national flag. It has come to symbolize many things and has been used as both a means of celebration and protest. “We are unique in the extent and depth of our worship of the flag. There’s no nation on earth like us,” says Rick Shenkman, associate history professor at George Mason University. 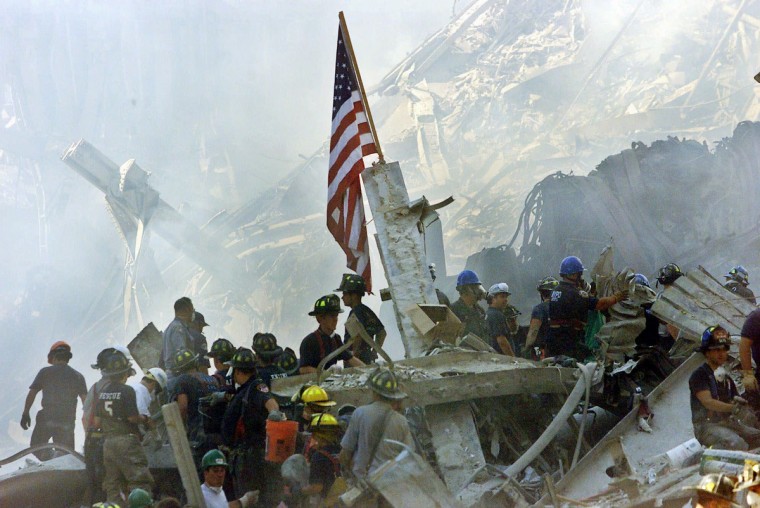 In this Sept. 13, 2001 file photo, a U.S. flag flies over the rubble of the collapsed World Trade Center buidlings in New York. Experts say there may be nowhere else in the world where flags stir more intense feelings than in the United States. (AP Photo/Beth A. Keiser) 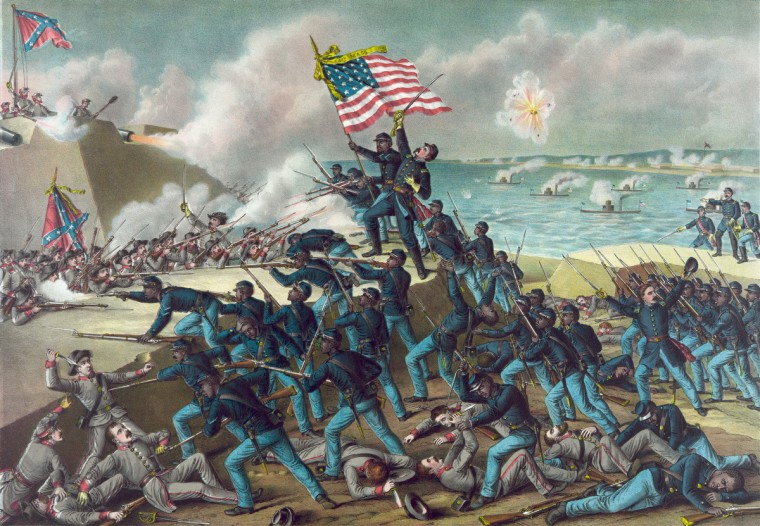 This 1890 artist’s rendition by Kurz & Allison made available by the Library of Congress depicts the charge of Union soldiers with the Massachusetts 54th Infantry Regiment on the Confederate States Army site of Fort Wagner, Morris Island, S.C., near Charleston, on July 18, 1863. Experts say in the U.S., particularly since the Civil War, flags have come to embody ideology and stir passions in ways that have few modern international equivalents. (Kurz & Allison, Library of Congress via AP) 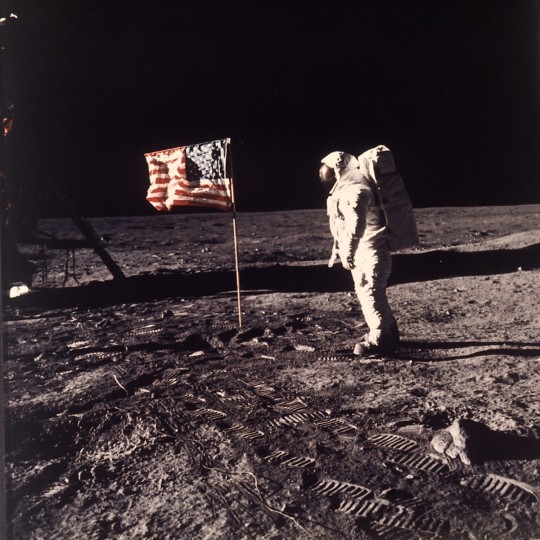 In this July 20, 1969 file photo, astronaut Edwin E. “Buzz” Aldrin Jr. stands next to a U.S. flag planted on the moon during the Apollo 11 mission. Aldrin and Neil Armstrong were the first men to walk on the lunar surface. (Neil A. Armstrong/NASA via AP) 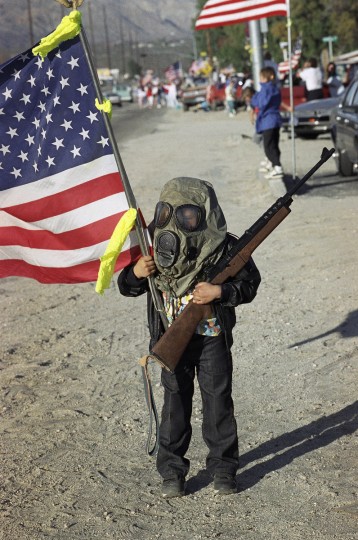 In this Sunday, March 11, 1991 file photo, Raymond Robles, 6, of Yucca Valley Calf., wears a gas mask as he carries a gun and a U.S. flag, waiting to greet Marines returning to Twentynine Palms, Calif. from the Persian Gulf. Robles, whose father is a retired Marine, says he wants to enlist when he grows up. (AP Photo/Nick Ut) 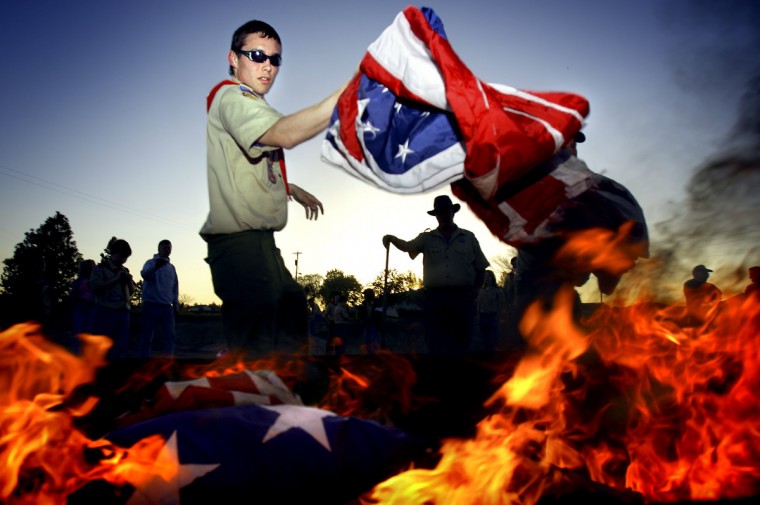 In this Wednesday, May 9, 2006 file photo, Jordan Vernon places a U.S. flag into burning barrels at the American Legion Post in Post Falls, Idaho. Vernon was one of about 40 Boy Scouts who spent the evening retiring almost 600 flags by fire. “We are unique in the extent and depth of our worship of the flag. There’s no nation on earth like us,” says Rick Shenkman, associate history professor at George Mason University and editor of the History News Network. (Jason Hunt/Coeur d’Alene Press via AP) 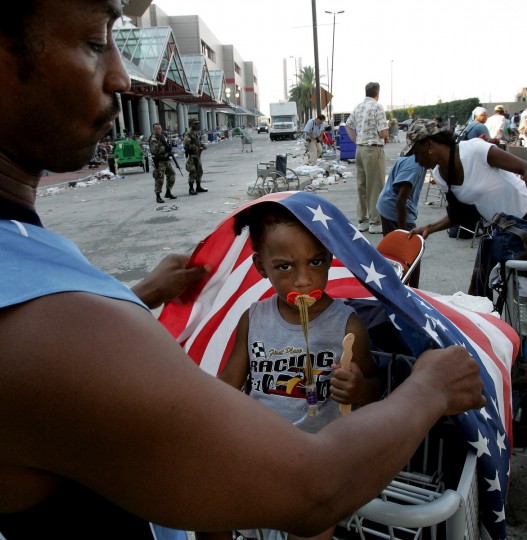 In this Sunday, Sept. 4, 2005 file photo, Jamaal Khalfani drapes a U.S. flag over his daughter Violet Riles to give her shade as they wait outside the Convention Center in New Orleans. Khalfani and his daughter were waiting to be evacuated from the devastation caused by Hurricane Katrina. (AP Photo/Steven Senne) 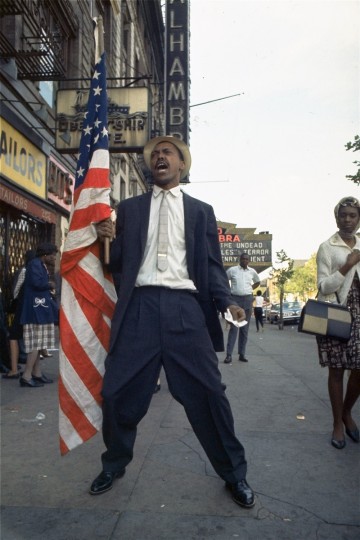 In this 1964 file photo, an unidentified black civil rights demonstrator carries a U.S. flag outside the Alhambra Theatre in Harlem neighborhood of New York. (AP Photo) 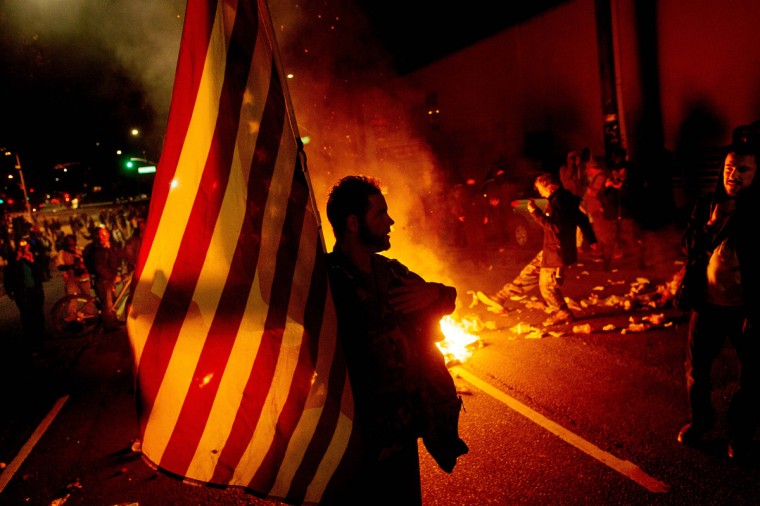 In this Monday, Nov. 24, 2014 file photo, James Cartmill holds a U.S. flag during a protest in Oakland, Calif. after the announcement that a grand jury decided not to indict Ferguson, Mo. police officer Darren Wilson in the fatal shooting of Michael Brown, an unarmed, black 18-year-old. Several thousand protesters marched through Oakland with some shutting down freeways, looting, burning garbage and smashing windows. (AP Photo/Noah Berger) 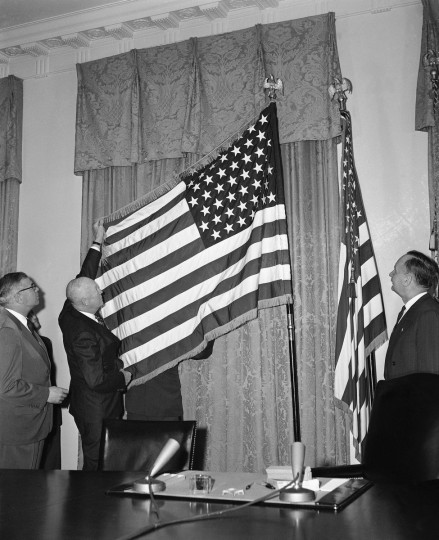 In this Jan. 3, 1959 file photo, President Dwight Eisenhower looks at the nation’s new 49-star flag at the White House in Washington, during a ceremony in which he proclaimed Alaska the 49th state. (AP Photo/Harvey Georges) 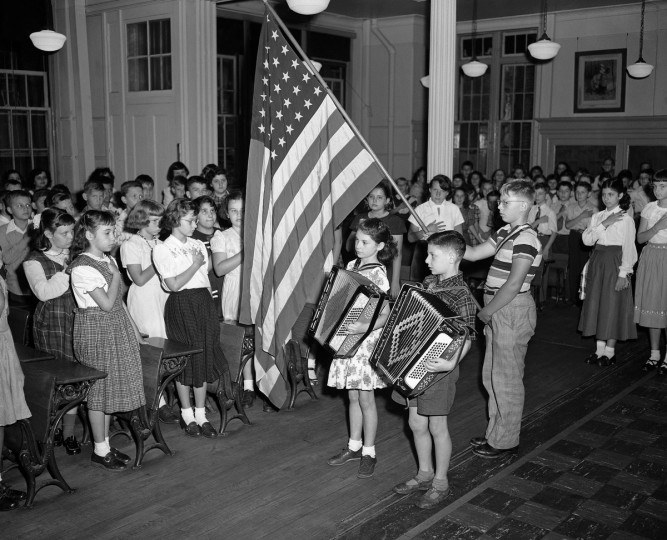 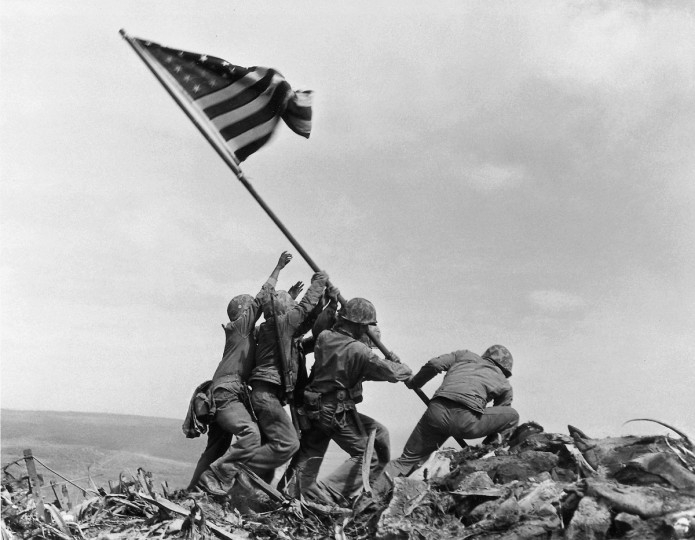 In this Feb. 23, 1945 file photo, U.S. Marines of the 28th Regiment, 5th Division, raise a U.S. flag atop Mount Suribachi, Iwo Jima. Strategically located 660 miles from Tokyo, the Pacific island became the site of one of the bloodiest, most famous battles of World War II against Japan. (AP Photo/Joe Rosenthal, File) 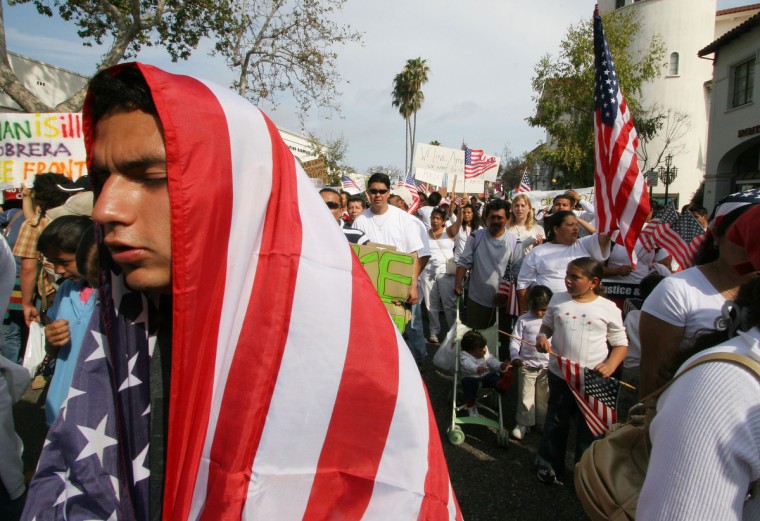 In this Monday, May 1, 2006 file photo, Victor Duque, wearing a U.S. flag, pauses in prayer as protestors march down State Street in Santa Barbara, Calif. in support of the nationwide “Day Without Immigrants.” (AP Photo/Michael A. Mariant) 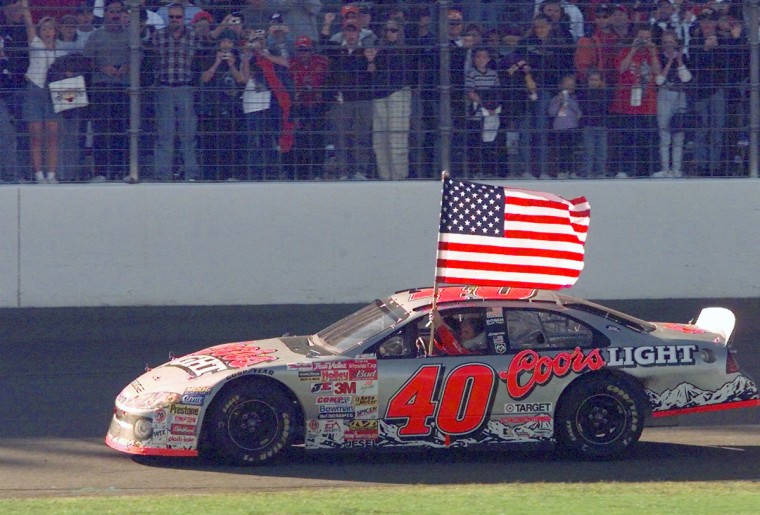 In this Sunday, Oct. 7, 2001 file photo, Sterling Marlin carries a U.S. flag past a cheering crowd during his victory lap after winning the UAW-GM Quality 500 race at Lowe’s Motor Speedway in Concord, N.C. “We are unique in the extent and depth of our worship of the flag. There’s no nation on earth like us,” says Rick Shenkman, associate history professor at George Mason University and editor of the History News Network. (AP Photo/Rusty Burroughs) 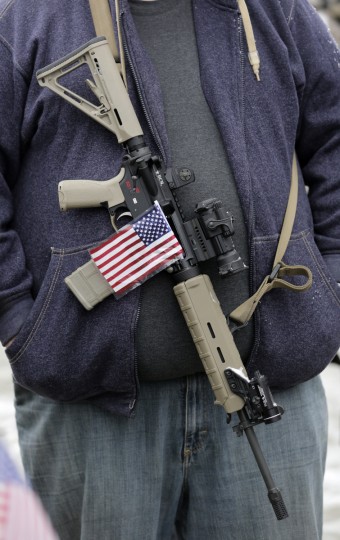 In this Saturday, Feb. 23, 2013 file photo, a gun-rights activist carries his rifle decorated with a U.S. flag during a “National Day of Resistance” rally at the Utah State Capitol in Salt Lake City, Utah. Activists said they were were there to show their support for the U.S. Constitution and the 2nd Amendment. (AP Photo/Rick Bowmer) 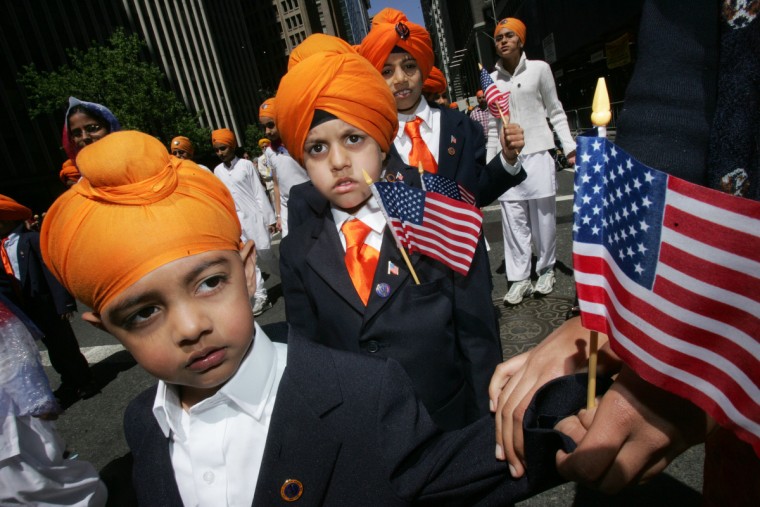 In this Saturday, April 29, 2006 photo, children with U.S. flags march down Broadway during the 19th Annual Sikh Day Parade in New York. Since Sept. 11, 2001, many Sikhs have been mistaken for Muslims and have become targets. As a result, they have been at the forefront of civil rights advocacy against religious and racial profiling. (AP Photo/Hiroko Masuike) 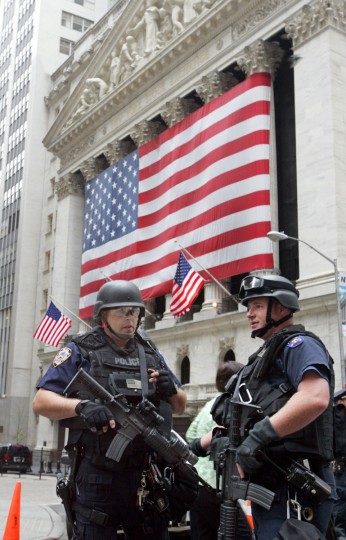 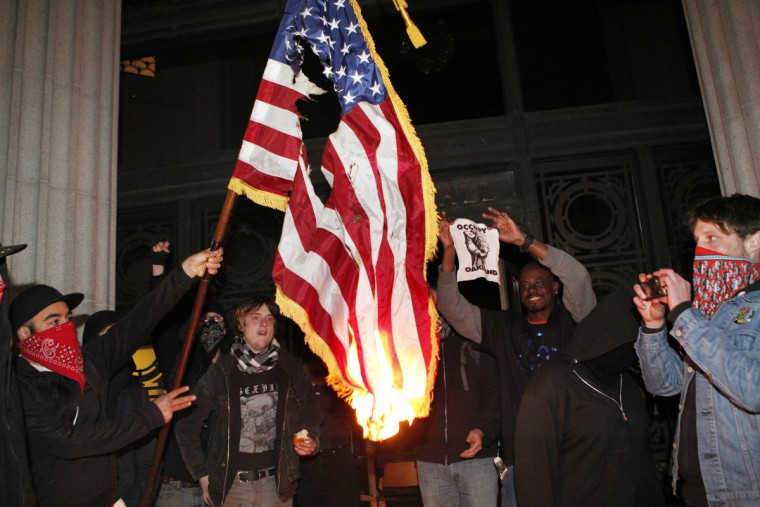 In this Saturday, Jan. 28, 2012 file photo, Occupy Oakland protesters burn a U.S. flag found inside City Hall in Oakland, Calif. during a protest on its steps. “Flags are, by their nature, emotion-charged emblems, and that’s especially the case in the U.S.,” says John Hartvigsen, president of the North American Vexillological Association, a group of scholars dedicated to the study of flags. (AP Photo/Beck Diefenbach) 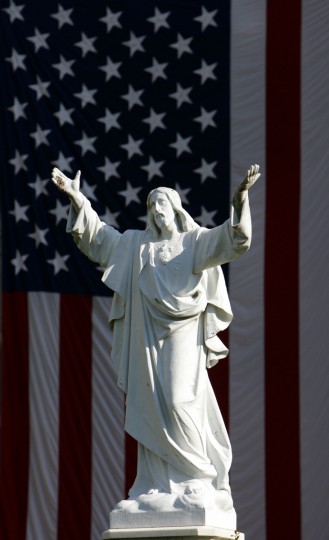 In this Sunday, Oct. 9, 2005 file photo, a large U.S. flag on the Loyola University campus hangs behind a life-sized statue of Jesus Christ in New Orleans. People paused from cleaning up from Hurricane Katrina to attend church. (AP Photo/Bill Haber) 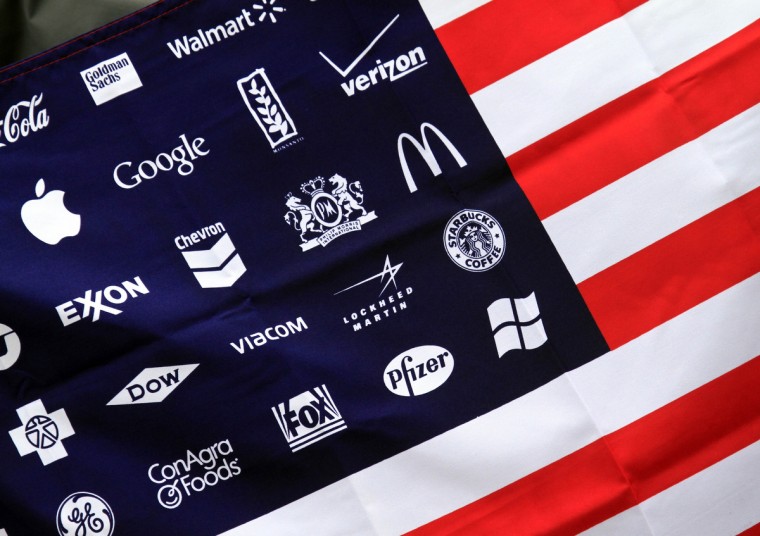 In this Monday, Oct. 10, 2011 file photo, corporate logos take the place of stars on an altered U.S. flag on display during a rally in Salem, Ore. in support of New York’s Occupy movement. John Hartvigsen, a flag scholar, says flags’ power to unite or divide is only as great as the significance people assign to them. (AP Photo/Don Ryan) 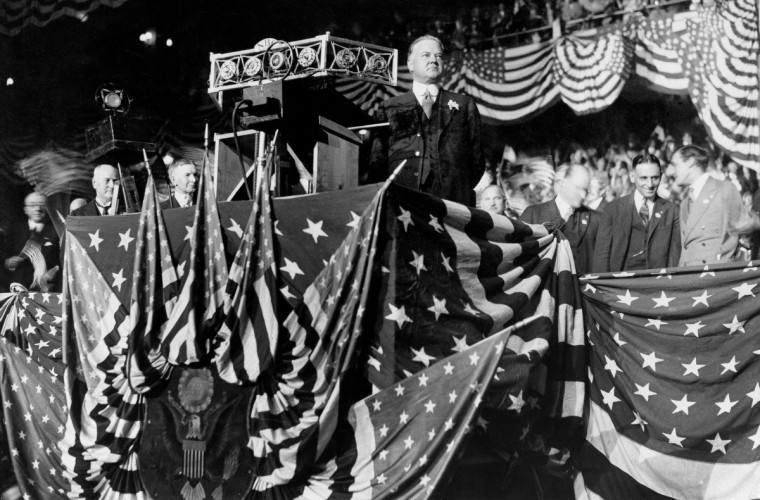 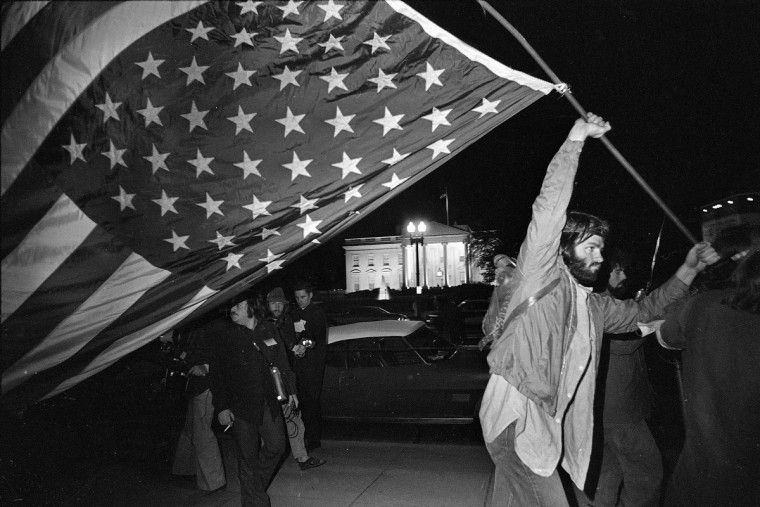 In this April 22, 1971 file photo, a demonstrator carries an inverted flag, a symbol of distress, as protesters against the Vietnam War march past the White House from their encampment on the Mall. (AP Photo/Henry Burroughs) 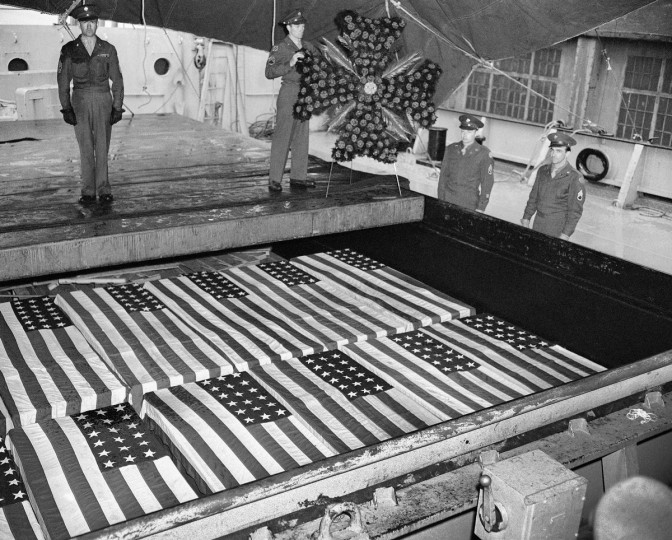 In this May 7, 1948 file photo, Three soldiers stand at attention as another places a wreath from Veterans of Foreign Wars next to the flag-draped caskets of Americans who gave their lives during the war in Europe, following the arrival of the S.S. Lawrence Victory at the Brooklyn Army Base in New York. The vessel carried the bodies of 4,184 war dead back to the U.S. for reburial. (AP Photo/John Lent) 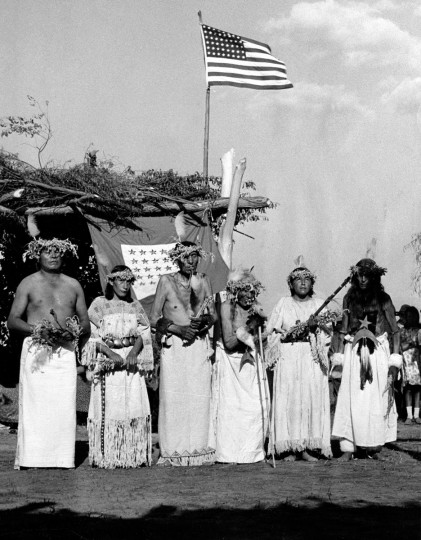 In this Aug. 8, 1942 file photo, members of the Standing Rock Sioux perform an ancient War Dance ceremony to support soldiers of their tribe on duty with the U.S. Army, in Little Eagle, S.D. The service flag behind them shows 22 stars, indicating the number of Little Eagle tribesmen serving . The War Dance ceremony was the first one to be performed in 52 years. (U.S. Signal Corps via AP) 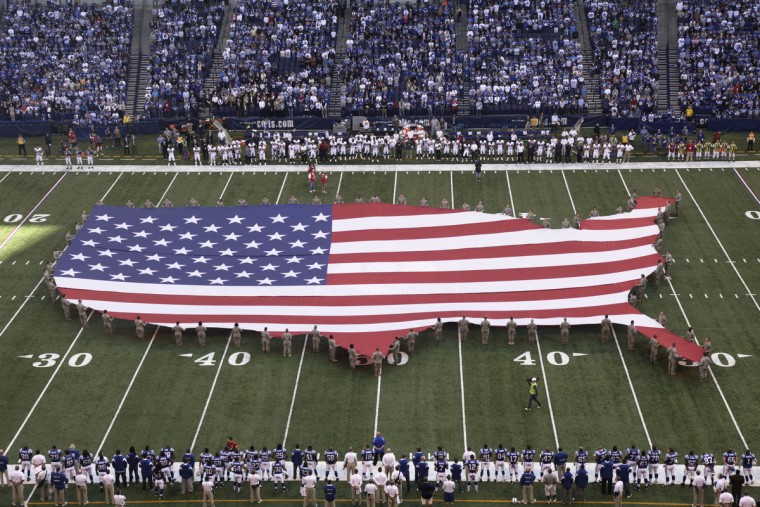 In this Sunday, Nov. 8, 2009 file photo, a U.S. flag in the shape of the continental United States is displayed on the field of Lucas Oil Stadium before an NFL football game between the Indianapolis Colts and the Houston Texans in Indianapolis. Marc Leepson, author of “Flag: An American Biography,” agrees. “We don’t have a monarch or a state religion,” he says. “In some ways, the flag is a substitute.” (AP Photo/AJ Mast)