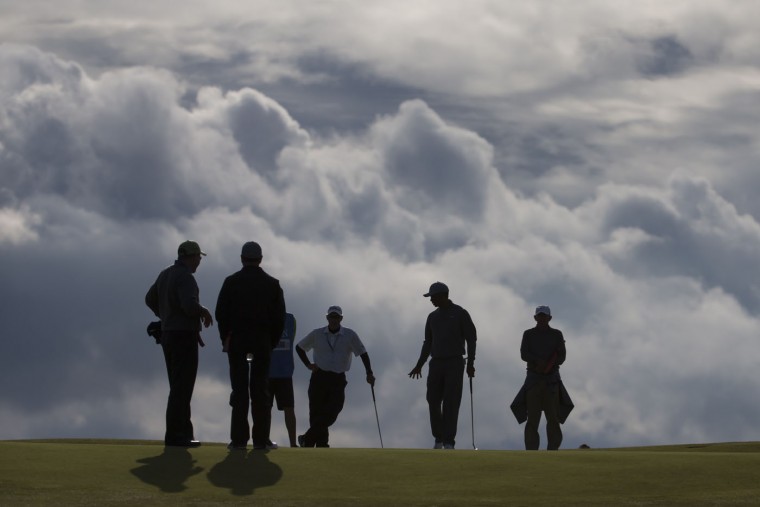 Tiger Woods of the United States, second right, walks across the 11th green during a practice round at St Andrews Golf Club prior to the start of the British Open Golf Championship, in St. Andrews, Scotland, Monday, July 13, 2015. (AP Photo/Jon Super) 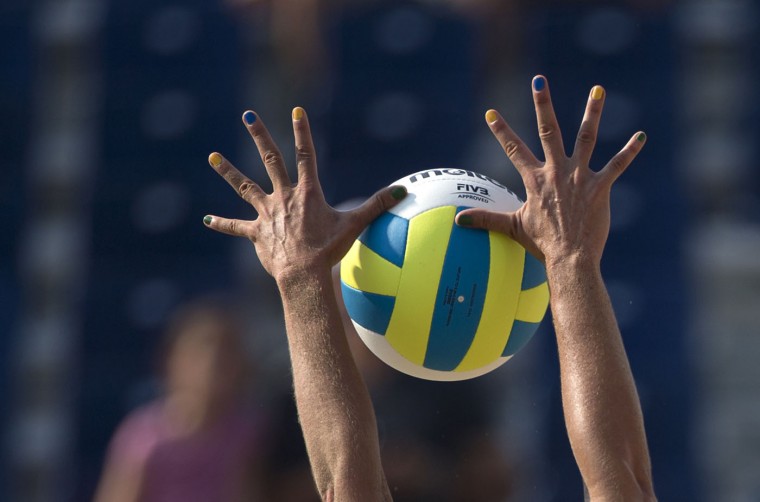 Brazil’s Liliane Maestrini, with her fingernails painted in the colors of the national flag, blocks the ball, during Brazil’s beach volleyball preliminary match against Nicaragua at the Pan Am Games in Toronto, Monday, July 13, 2015. (AP Photo/Rebecca Blackwell) 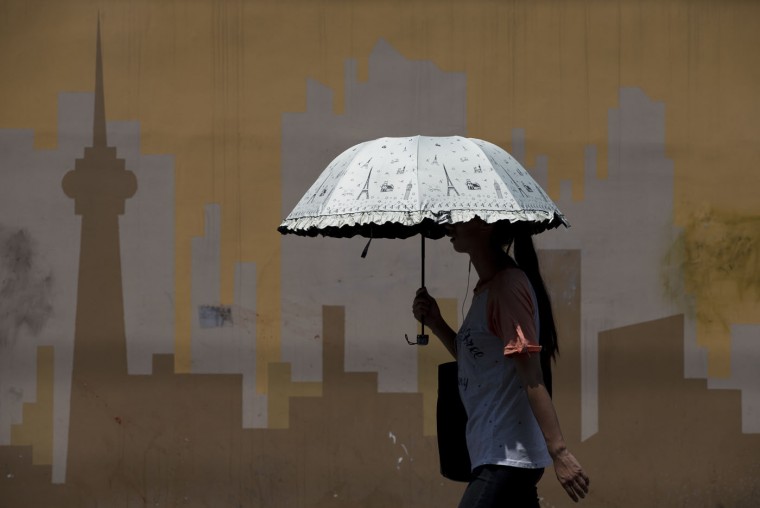 A woman carrying an umbrella to shield from the sun as she walks past a mural of a city skyscrapers in Beijing Monday, July 13, 2015. The National Meteorological Center (NMC) has issued a yellow alert for high temperatures as China is entering the height of summer. A heat wave will hit central, eastern and northern China on Monday with temperatures in some regions rising to around 40 degrees Celsius (104 degrees Fahrenheit) , Chinese state media reported. (AP Photo/Andy Wong) 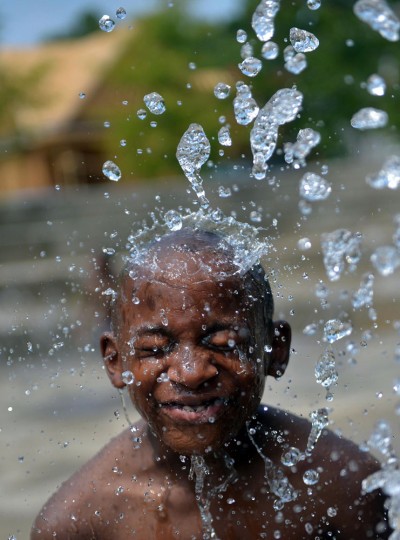 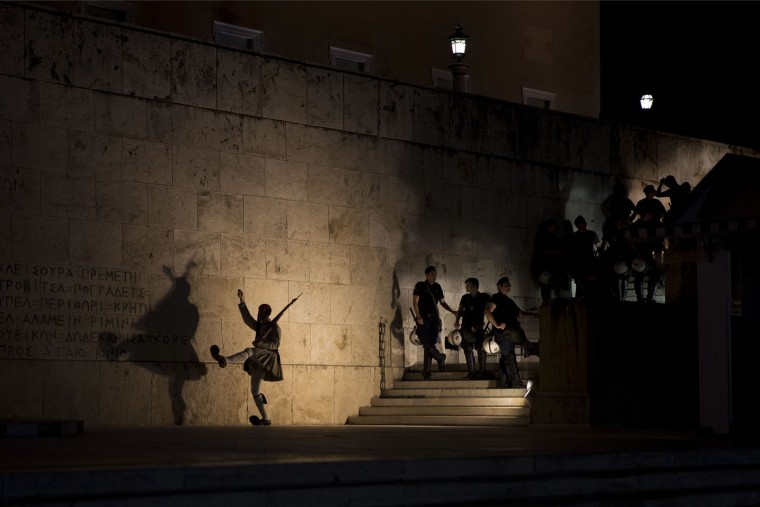 A presidential guard, left performs at the tomb of the unknown soldier as riot police secure one of the entrances of the parliament during an anti austerity protest in Athens, Monday, July 13, 2015. After months of acrimony, Greece clinched a preliminary bailout agreement with its European creditors on Monday that will, if implemented, secure the country’s place in the euro and help it avoid financial collapse. (AP Photo/Petros Giannakouris) 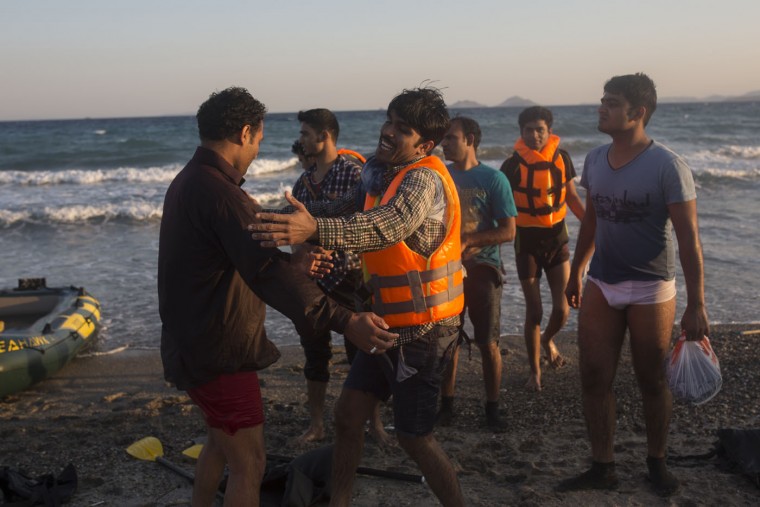 Migrants from Pakistan react as they disembark after rowing a dinghy from the Turkish coasts to the Greek island of Kos, Monday, July 13, 2015. Some tens of thousands of migrants have arrived in Greece so far this year, usually on Aegean islands from the nearby Turkish coast, overwhelming local authorities and aid groups say Greece needs more help from the European Union to deal with the influx. (AP Photo/Santi Palacios) 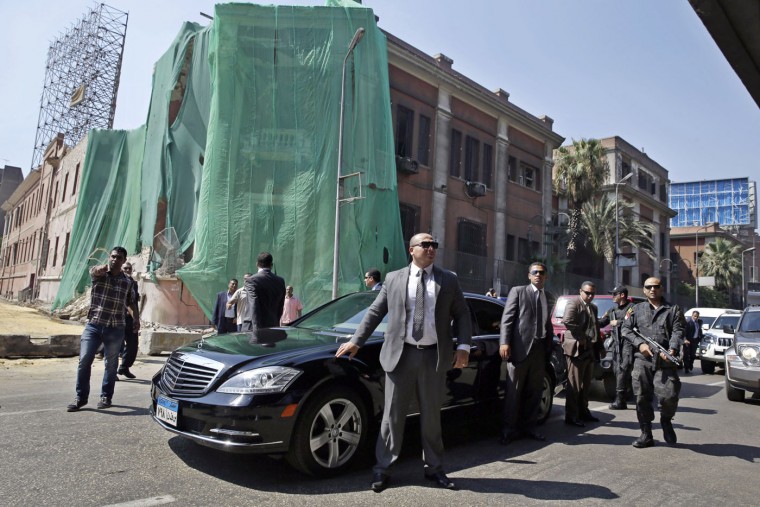 Security guards stand next to the car carrying Italian Foreign Minister Paolo Gentiloni as he visits the site of an explosion at the Italian Consulate in downtown, Cairo, Egypt, Monday, July 13, 2015. Gentiloni’s visit comes days after a car bomb ripped into the Italian Consulate in Cairo early Saturday, destroying a section of the historic building in a powerful blast that killed one Egyptian and marked the most significant attack yet on foreign interests as militants target the country’s security forces. (AP Photo/Hassan Ammar) 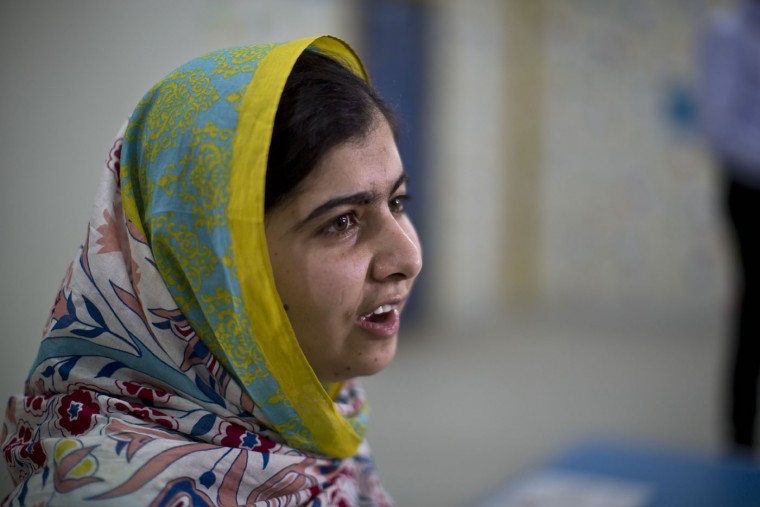 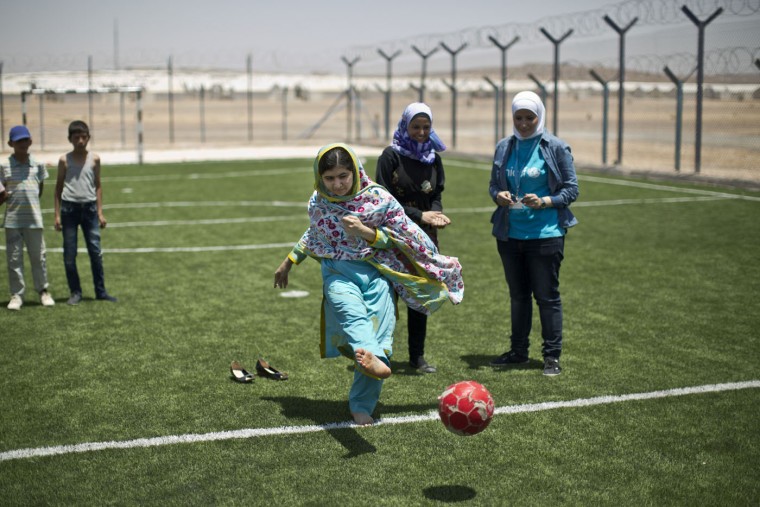 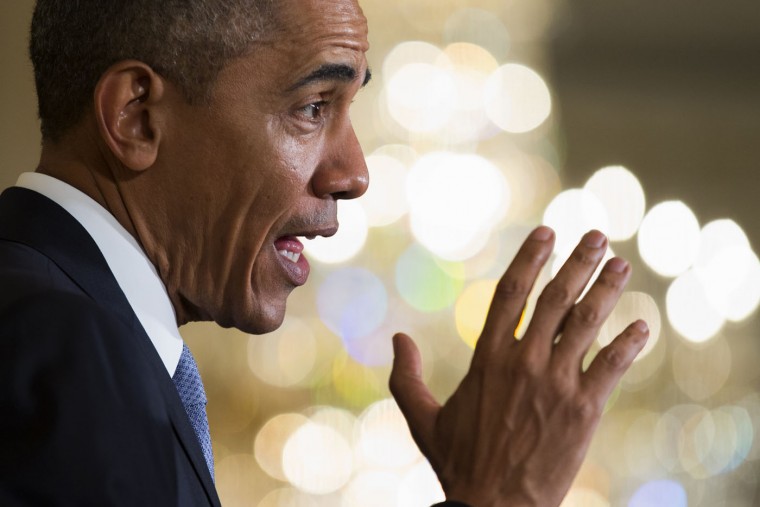 President Barack Obama speaks during the 2015 White House Conference on Aging, Monday, July 13, 2015, in the East Room of the White House in Washington. The president said a secure retirement is a critical component of what it means to be middle class in America. (AP Photo/Evan Vucci) 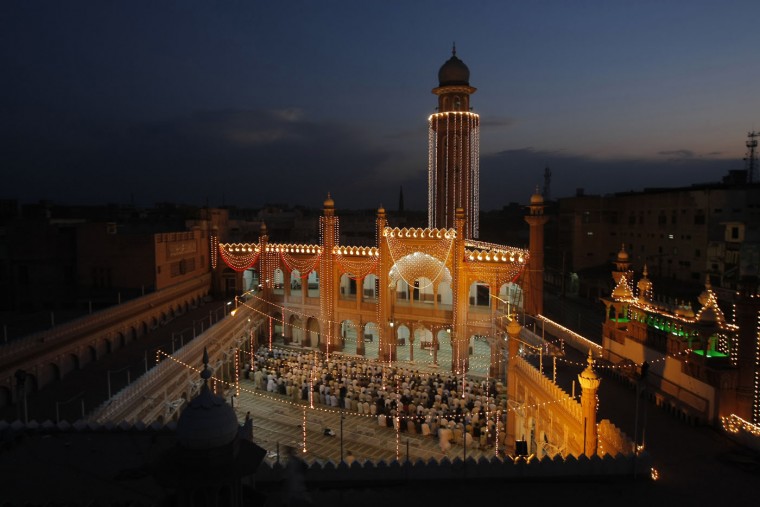 Pakistani Muslims offer evening prayers at a local mosque decorated to observe Ramadan in Peshawar, Pakistan, Monday, July 13, 2015. Muslims across the world are observing the holy fasting month of Ramadan, where they refrain from eating, drinking and smoking from dawn to dusk. (AP Photo/Mohammad Sajjad) 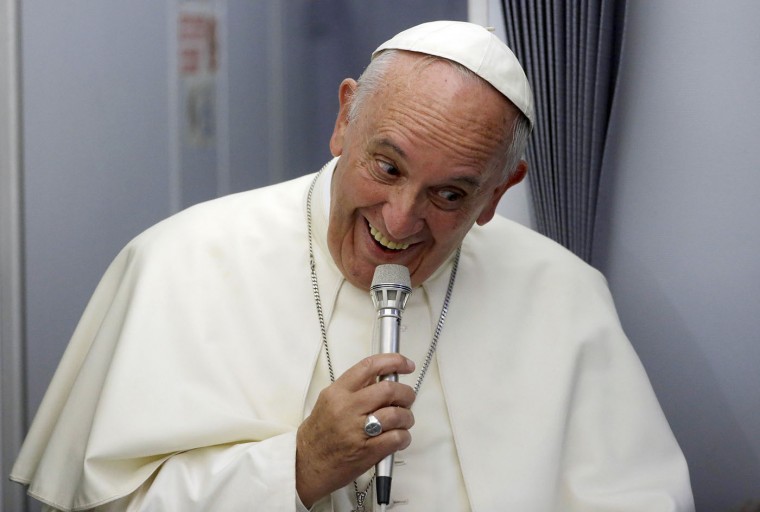 In this photo taken on Sunday, July 12, 2015, Pope Francis smiles as he meets the media during an airborne press conference aboard the airplane directed to Rome, at the end of his Apostolic journey in Ecuador, Bolivia and Paraguay. (AP Photo/Gregorio Borgia) 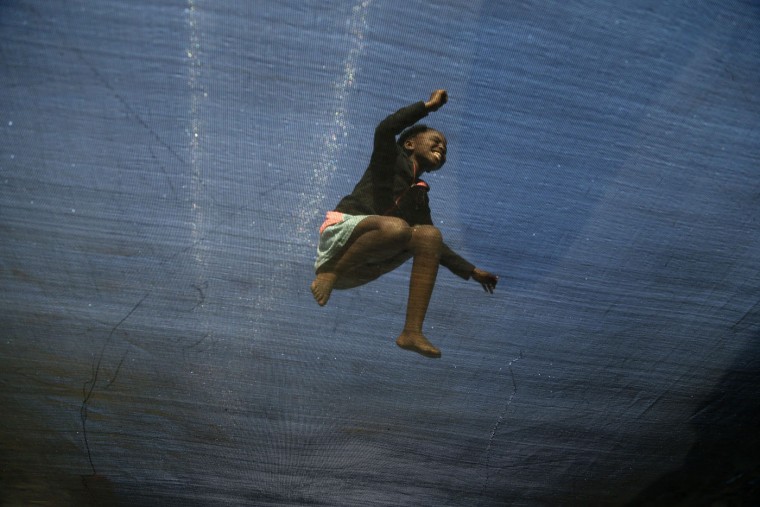 Twelve year-old girl Simphiwe Gama enjoys jumping on a trampoline in Katlehong, about 30Km east of Johannesburg, South Africa, Monday, July 13, 2015. The trampoline is set up by a resident and operated for the local community, charging 50 cents for five minutes of jumping fun. (AP Photo/Themba Hadebe) 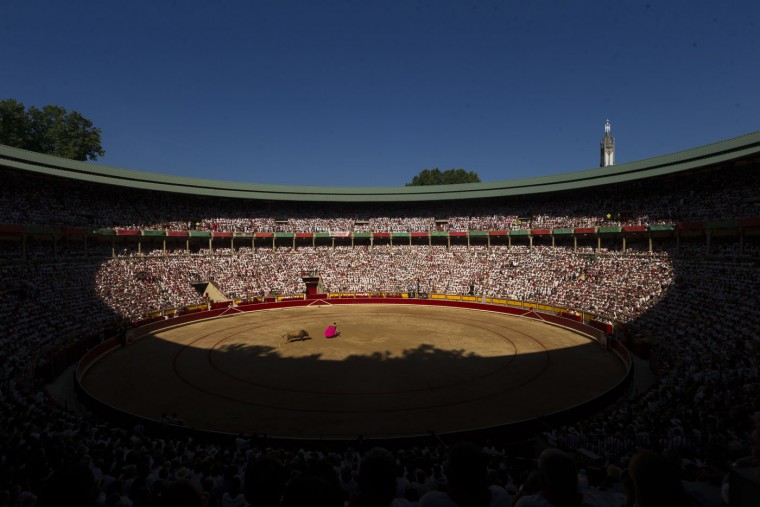 Spanish bullfighter Juan Jose Padilla performs with a Garcigrande ranch fighting bull during a bullfight of the San Fermin festival in Pamplona, Spain, Monday, July 13, 2015. Revelers from around the world arrive in Pamplona every year to take part on some of the eight days of party and the running of the bulls. (AP Photo/Daniel Ochoa de Olza) 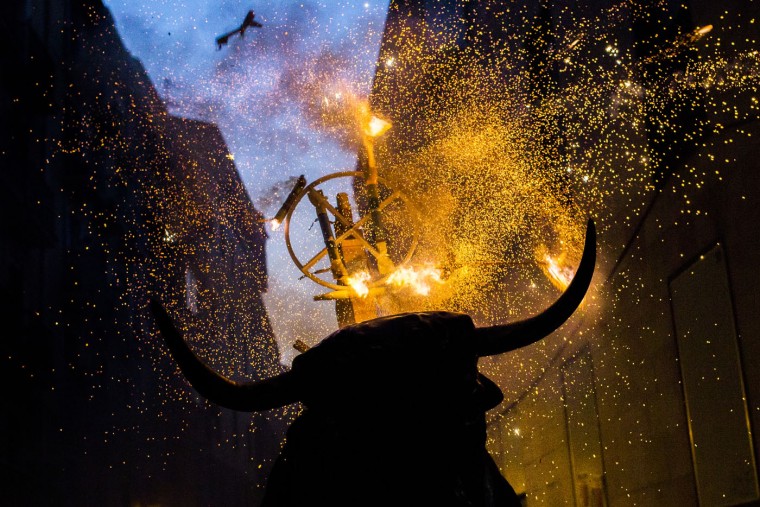 A flaming fake bull known as a “Toro de fuego” runs after revelers during San Fermin festival in Pamplona, Spain, Monday, July 13, 2015. Revelers from around the world arrive in Pamplona every year to take part in some of the eight days of the running of the bulls. (AP Photo/Andres Kudacki) 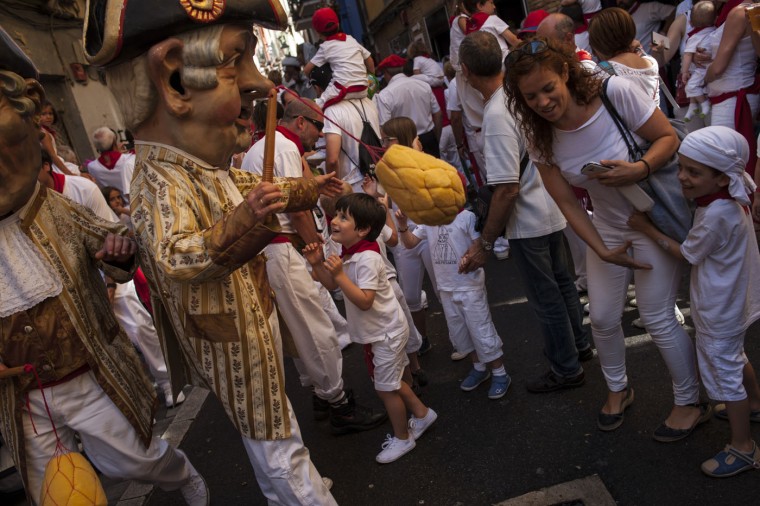 A young boy looks up at a ”Cabezudo”, a member of San Fermin Parade of Giants, at the San Fermin Festival, in Pamplona, Spain, Monday, July 13, 2015. Revelers from around the world arrive to Pamplona every year to take part in some of the eight days of the running of the bulls. (AP Photo/Alvaro Barrientos)