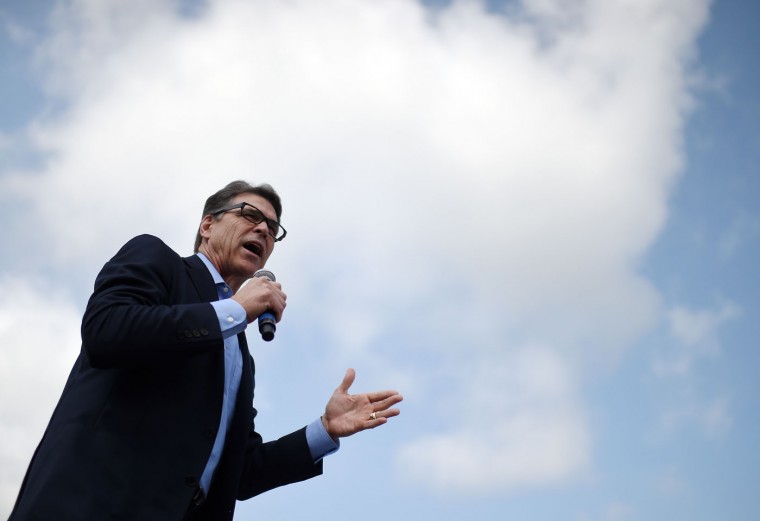 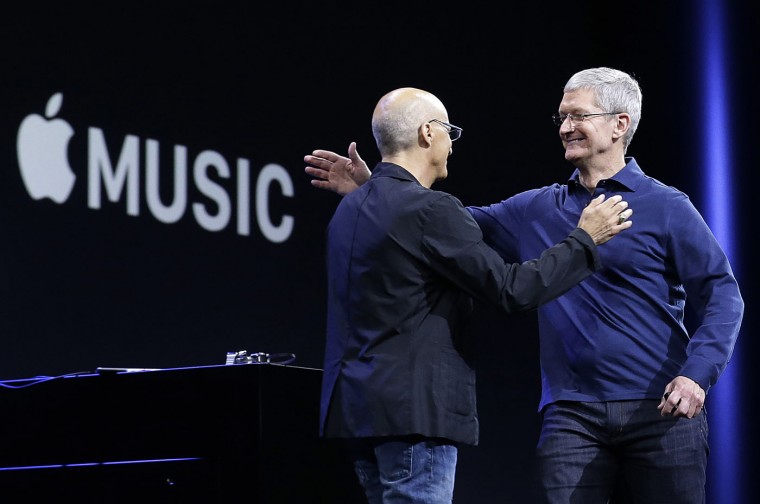 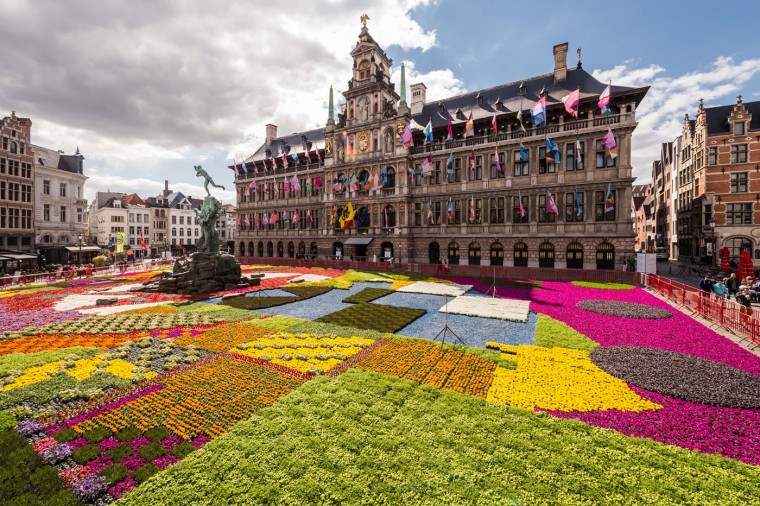 More than 173,000 pots of plants and herbs form a flower carpet in front of the city hall in Antwerp, Belgium, on Monday, June 8, 2015. To celebrate the 450th anniversary of the Antwerp city hall, artist Anne-Mie Van Kerckhoven selected 31 different species to create a design of large geometric figures in bright sixties colors. Van Kerckhoven found inspiration in the Renaissance floor of the Plantin-Moretus museum and in a map of the city by the river Scheldt, which dates from 1575, and includes the river bend. The carpet measures 60 by 30 meters (196 by 98 feet). (AP Photo/Geert Vanden Wijngaert) 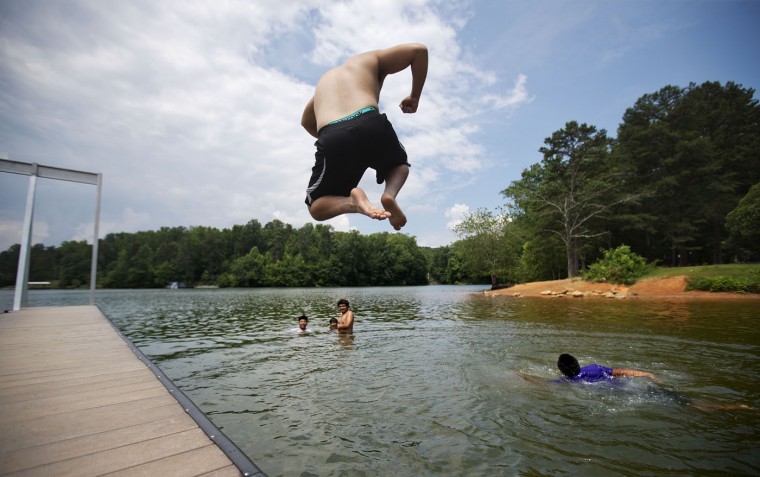 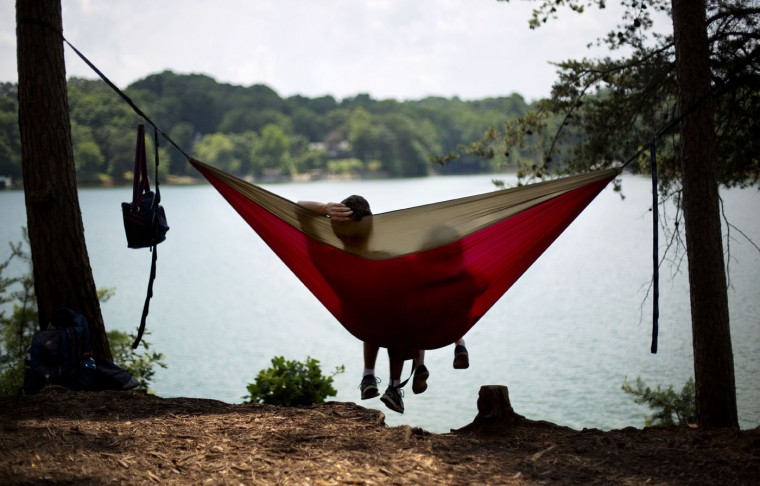 Carson Ricketts, left, and Jasmine Puett look out over Lake Lanier while sitting in a hammock in Laurel Park, Monday, June 8, 2015, in Gainesville, Ga. Lanier is a reservoir in the northern area of Georgia. It was created by the completion of Buford Dam on the Chattahoochee River in 1956. (AP Photo/David Goldman) 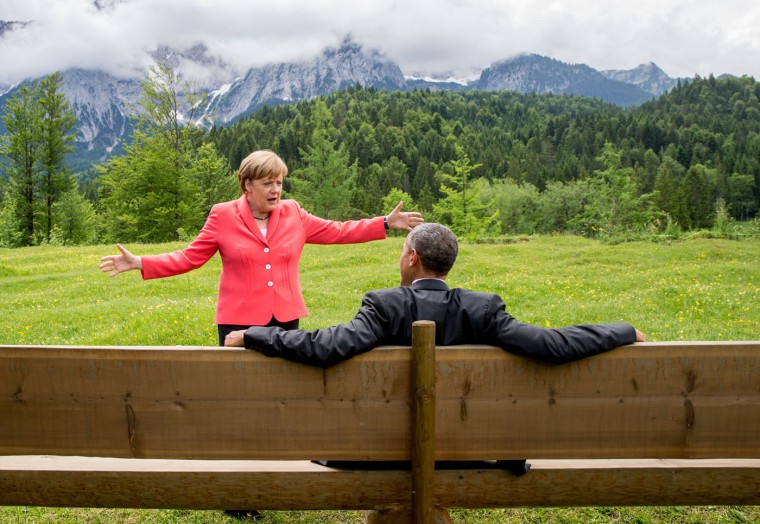 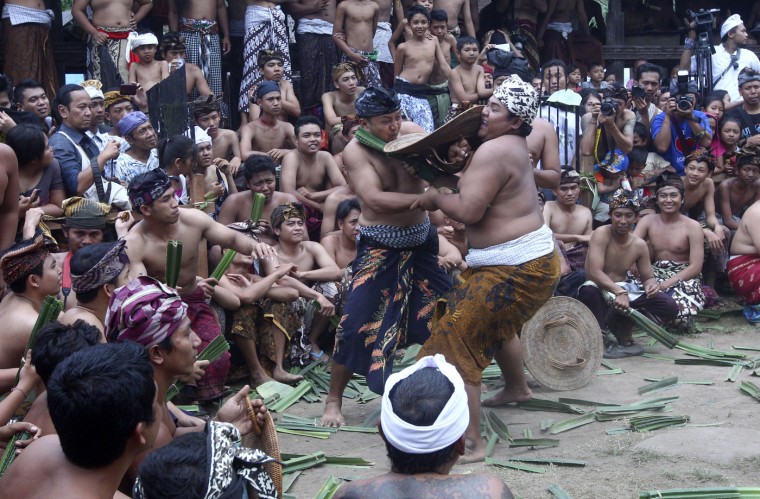 Balinese fighters combat with sticks wrapped in thorny pandanus leaves during a village festival ceremony in Bali, Indonesia, Monday, June 8, 2015. Once a year, during the ritual tournament festival, men of the village fight each other with wads of thorny pandanus leaves as part of a sacrifice to placate the evil spirits. (AP Photo/Firdia Lisnawati) 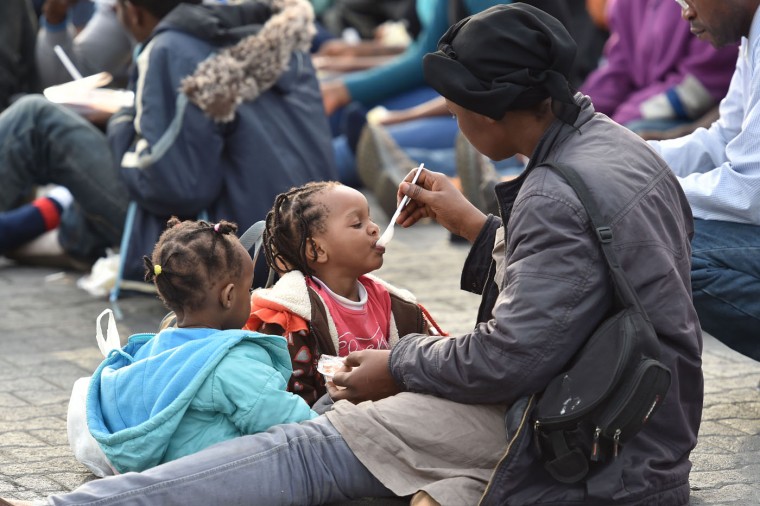 A migrant woman feeds a child after they were disembarked from the British Royal Navy ship HMS Bulwark at Catania harbor, Italy, Monday, June 8, 2015. Over the last weekend, nearly 6,000 migrants were rescued by an array of European military vessels, including 2,371 who were saved on Sunday from 15 boats that ran into difficulty shortly after smugglers set off with them from Libyan shores, the Italian coast guard said. (AP Photo/Carmelo Imbesi) 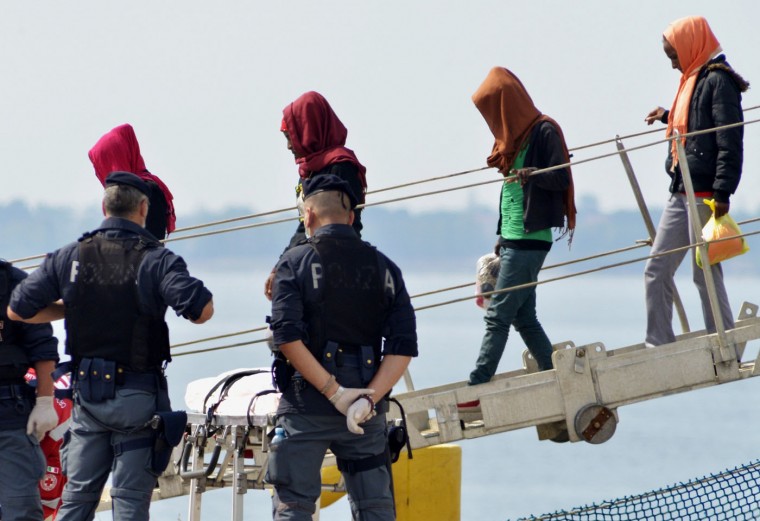 Rescued migrants disembark from the Irish Navy ship Le Eithne at the Taranto harbor, Italy, Monday, June 8, 2015. Heartened by recent election successes by an anti-immigrant party, Italian politicians based in the north vowed Sunday not to shelter any more migrants saved at sea, even as thousands more were being rescued in the Mediterranean from smugglers’ boats in distress. (AP Photo/Gaetano Lo Porto) 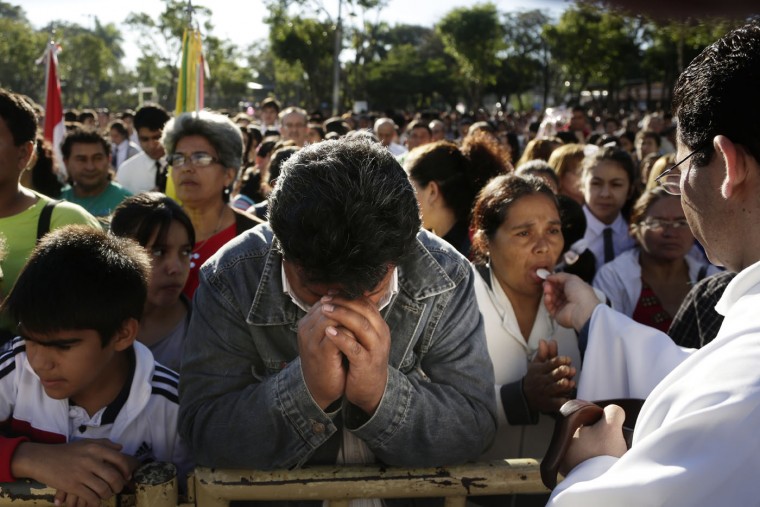 Faithful partake in the Catholic sacrament of communion as they participate in the Corpus Christi mass in Caacupe, Paraguay, Sunday, June 7, 2015. Catholics take part in a procession through the streets of a neighborhood near their parish following mass and pray and sing celebrating the tradition and belief in the body and blood of Jesus Christ. (AP Photo/Jorge Saenz) 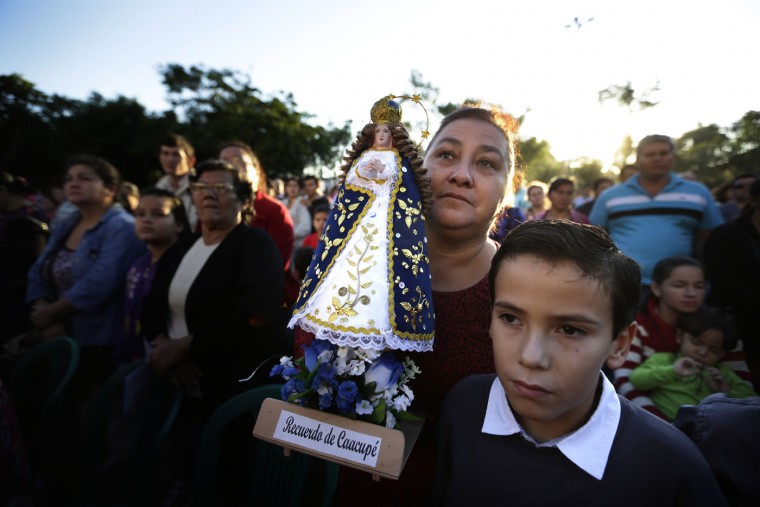 Mercedes Adad carries a Caacupe Virgin replica as she and her son Oscar participate of Corpus Christi mass in Caacupe, Paraguay, Sunday, June 7, 2015. Catholics take part in a procession through the streets of a neighborhood near their parish following mass and pray and sing celebrating the tradition and belief in the body and blood of Jesus Christ. (AP Photo/Jorge Saenz) 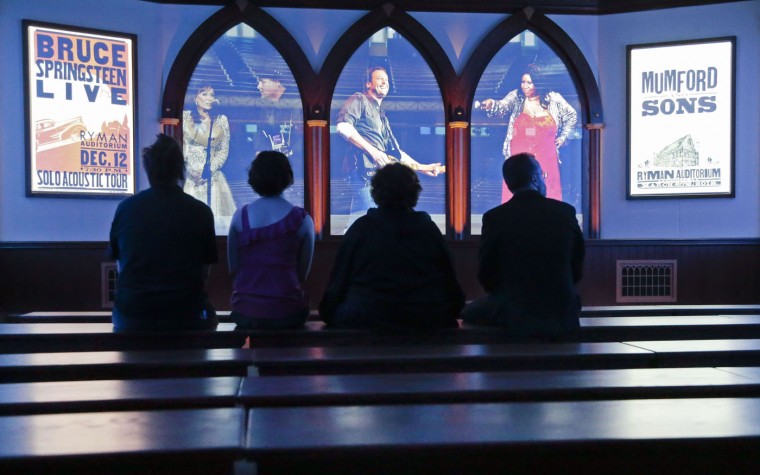 People view a multimedia show in a new theater at the Ryman Auditorium, Monday, June 8, 2015, in Nashville, Tenn. The Tennessean reports that the Ryman is ready for its grand reopening after a yearlong, $14 million expansion. (AP Photo/Mark Humphrey) 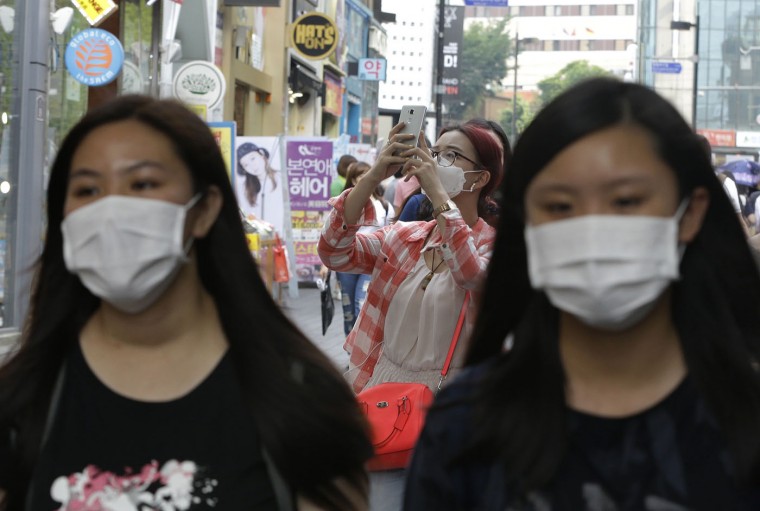 A foreign tourist, center, wears a mask as a precaution against Middle East Respiratory Syndrome (MERS) as she takes pictures with her smartphone at the Myeongdong, one of the main shopping districts, in Seoul, South Korea, Monday, June 8, 2015. South Korea on Monday reported its sixth death from MERS as authorities were bolstering measures to stem the spread of the virus that has left dozens of people infected. (AP Photo/Ahn Young-joon) 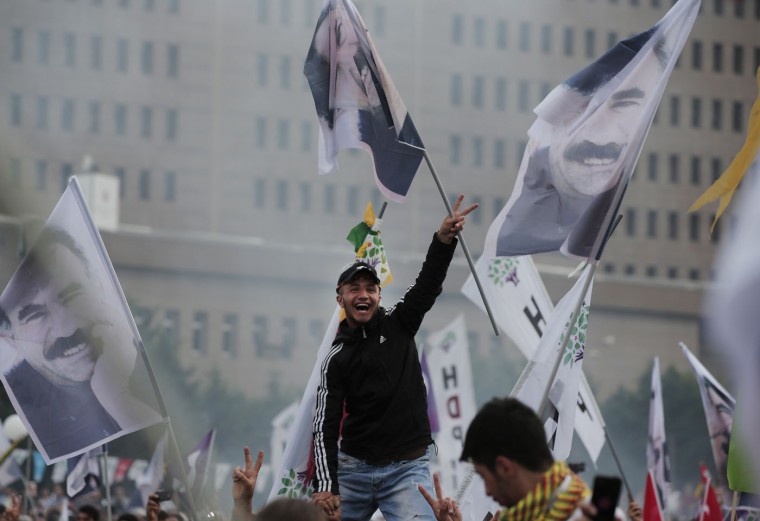 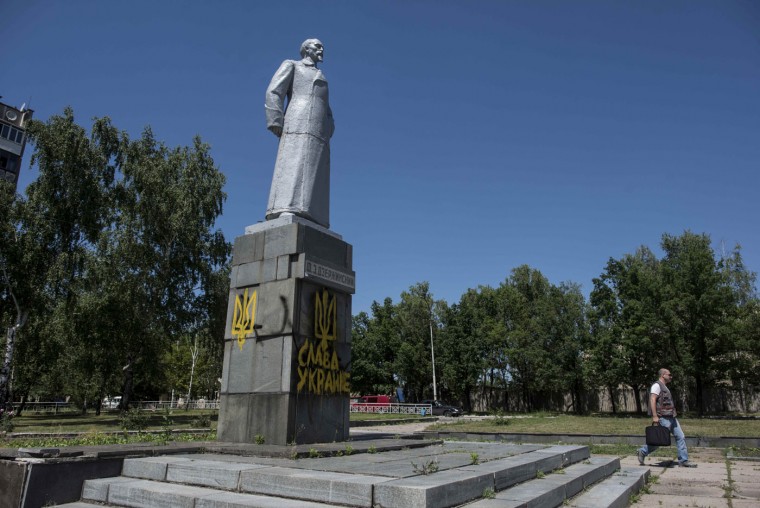 A local resident walks past a monument to KGB founder Felix Dzerzhinsky, with Ukrainian emblem and the words “Glory to Ukraine” painted on it, in Dzerzhinsk, eastern Ukraine, Monday, June 8, 2015. Obama says the Group of Seven leading nations stand behind Ukraine and agree that economic sanctions should remain in place against Russia until it fully implements a cease-fire with Ukraine that has been violated repeatedly. (AP Photo/Evgeniy Maloletka)