The creator of the pink plastic lawn flamingo, the ultimate symbol of American lawn kitsch, has died. Donald Featherstone was 79.

Featherstone’s wife, Nancy, told The Associated Press on Tuesday that her husband died Monday at an elder care facility in Fitchburg, Massachusetts, after a long battle with Lewy body dementia.

Featherstone, a trained sculptor with a classical art background, created the flamingo in 1957 for plastics company Union Products, modeling it after a bird he saw in National Geographic. Millions of the birds have been sold.

Featherstone worked for Union for 43 years, inventing hundreds of plastic products in that time and rising to the position of president before his retirement in 1999.

In addition to his wife of 40 years, Featherstone is survived by two children, four grandchildren and 2 great-grandchildren.

Copyright 2015 The Associated Press. All rights reserved. This material may not be published, broadcast, rewritten or redistributed. 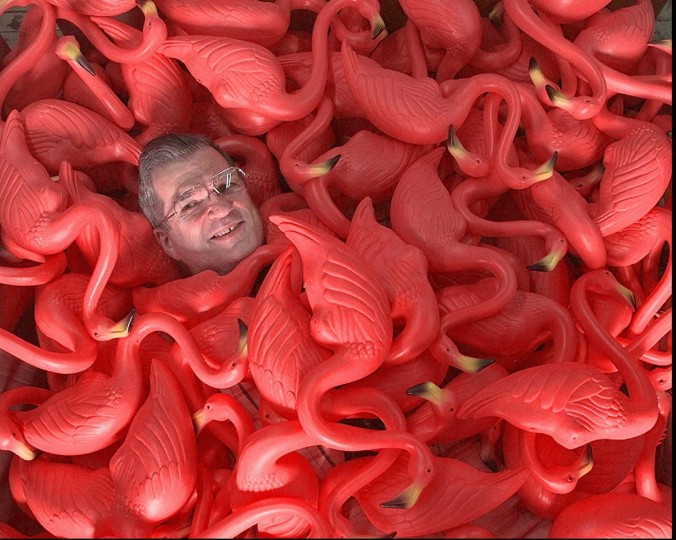 , Don Featherstone, creator of the original plastic pink flamingo, sits surrounded by many of the plastic creatures at Union Products, Inc. in Leominster, Mass. Featherstone died Monday, June 22, 2015, at an elder care facility in Fitchburg, Mass., according to his wife, Nancy. He was 79. (AP Photo/Amy Sancetta) 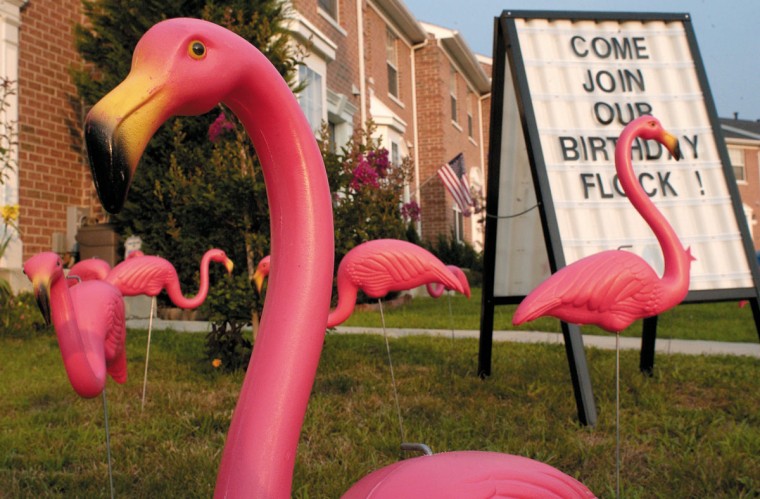 Edith Goldman’s company “Flamingo Smiles” places the pink lawn ornaments in customers’ yards to surprise them on their birthdays, anniversaries, or graduations. Goldman has been spreading joy in Columbia with flamingos for about a year. (Baltimore Sun archives) 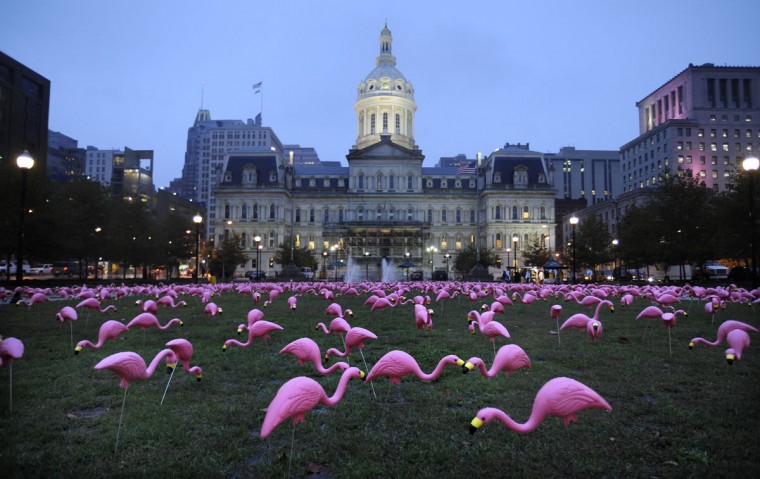 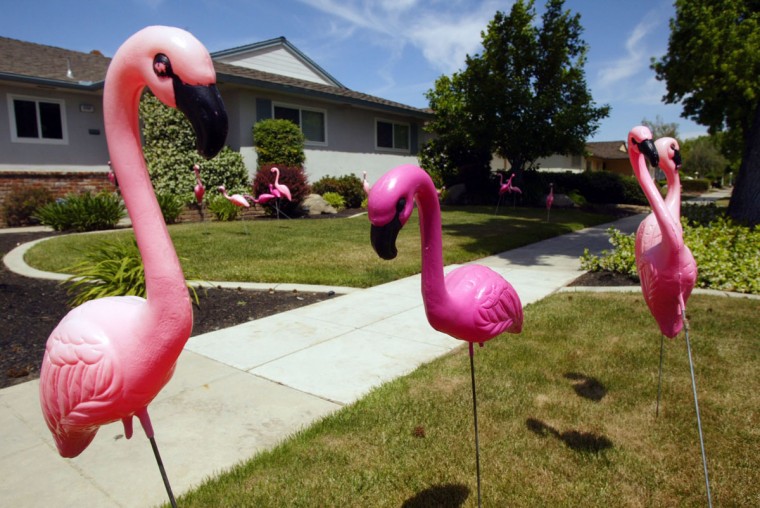 Students from the Seventh Day Adventist Academy in Fresno, California sneak up homes and plant 24 pink, plastic flamingoes in the front yard, as pictured May 12, 2007. A note is left in the yard asking for a donation to be used for class activities. (Diana Baldrica/Fresno Bee/MCT) 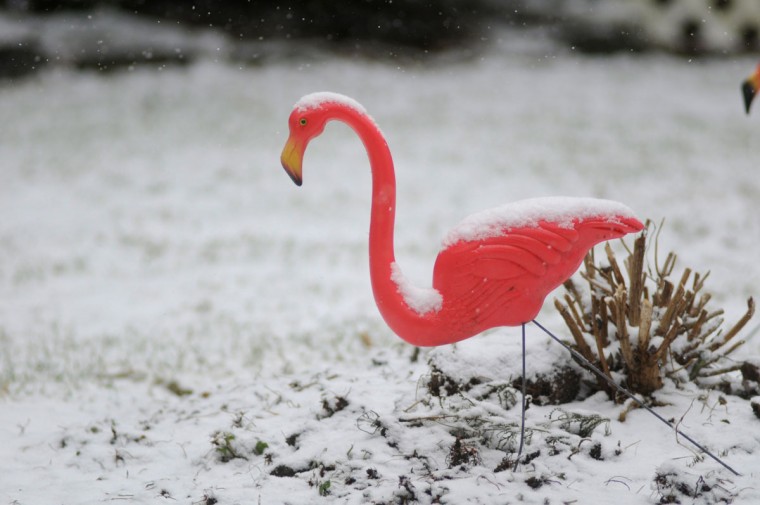 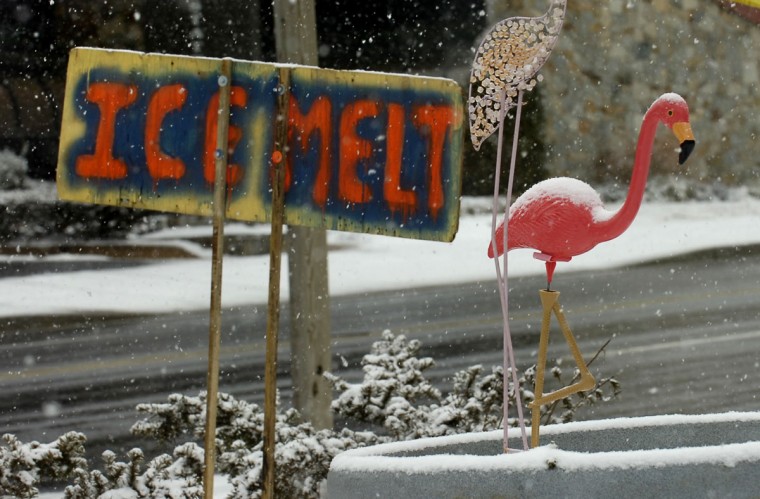 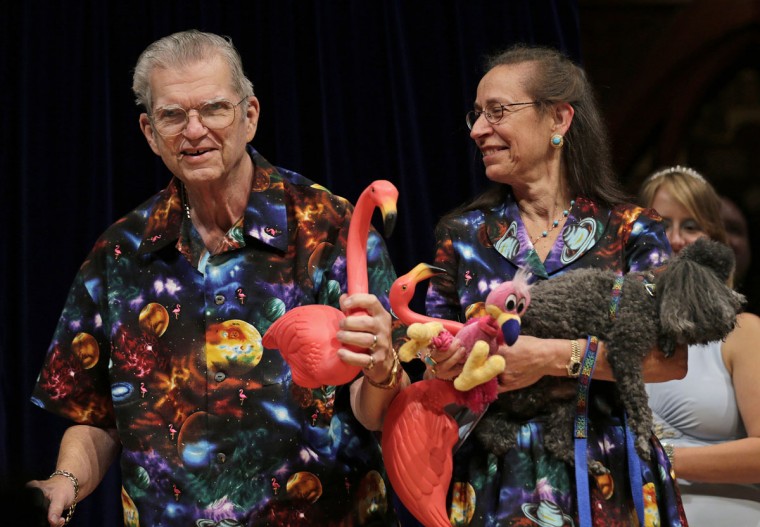 Artist Don Featherstone, 1996 Ig Nobel Prize winner and creator of the plastic pink flamingo lawn ornament, poses with his wife Nancy while being honored as a past recipient during a performance at the Ig Nobel Prize ceremony at Harvard University, in Cambridge, Mass. Featherstone died Monday, June 22, 2015, at an elder care facility in Fitchburg, Mass., according to his wife, Nancy. He was 79. (AP Photo/Charles Krupa) 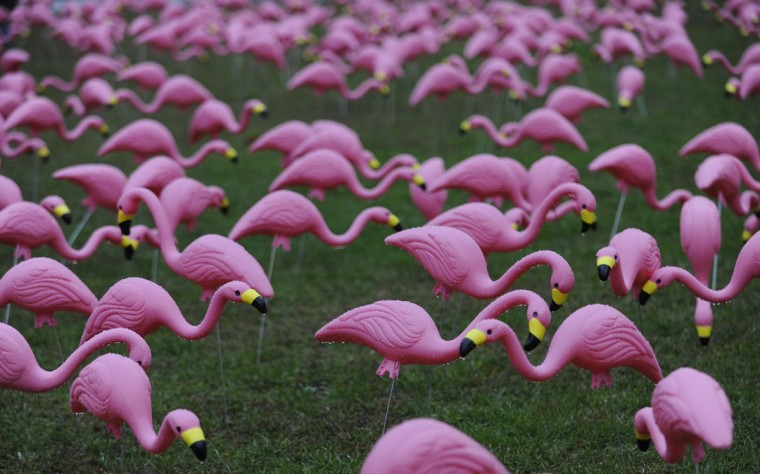 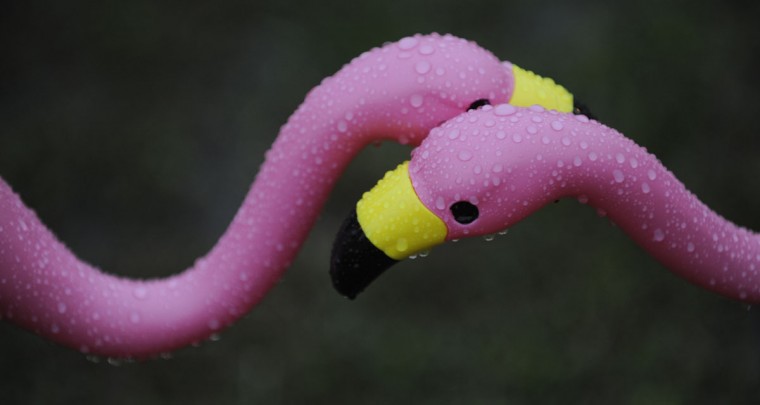 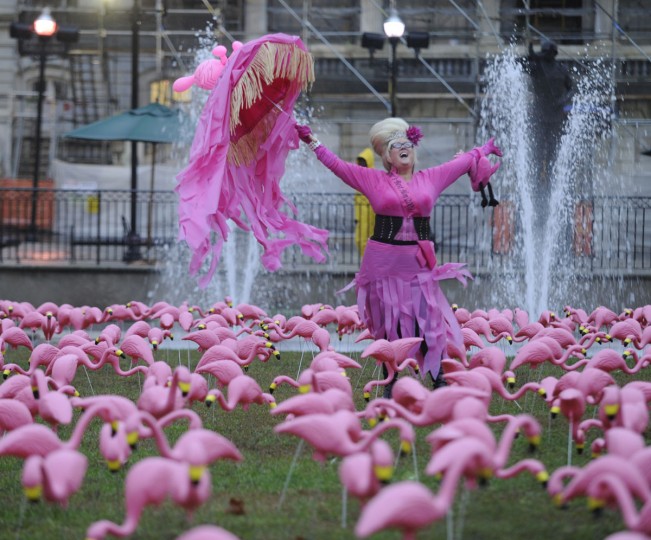 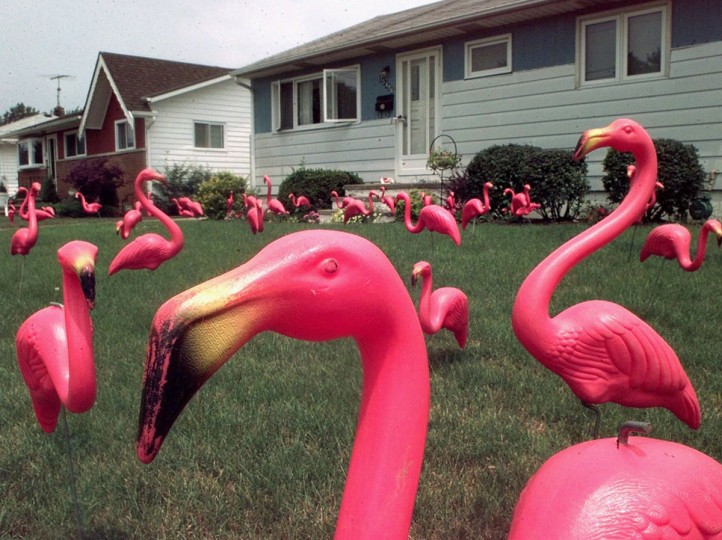 Dozens of pink flamingos stand in a yard in Brook Park, Ohio, in this July 16, 1998, file photo, that was set up by The Original Flamingo Surprise, a party service, to celebrate the resident’s 49th birthday. The original version of the plastic flamingo may be singing its swan song after being alternately celebrated as a tribute to one of nature’s most graceful creatures and derided as the epitome of American kitsch. Union Products Inc. stopped producing flamingos and other lawn ornaments in June, and is going out of business Nov. 1. (AP Photos/Amy Sancetta, file) 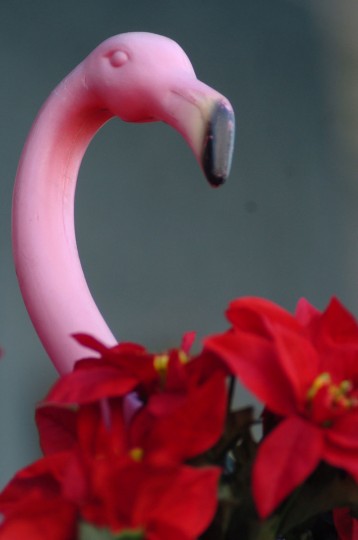 The decorations for the “Miracle on 34” street Christmas display are going up house-by-house in Hampden. Pink flamingo detail with poinsettias is found at Dan Brewer’s home, (Algerina Perna/Baltimore Sun file) 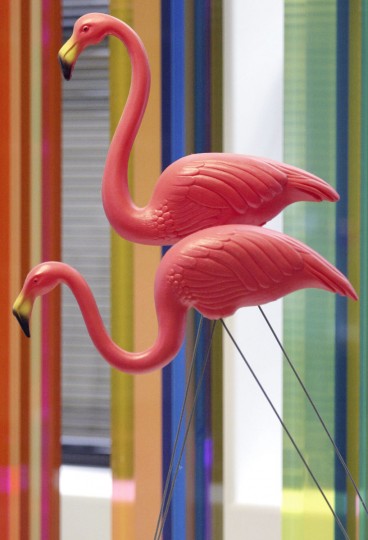 Original pink plastic flamingos are seen on display at the National Plastics Center and Museum in this file photo taken Thursday, Oct. 26, 2006, in Leominster, Mass. An upstate New York manufacturer said Thursday, May 31, 2007, that he has bought the copyright and plastic molds to restart production of the original Don Featherstone-designed flamingo, picking up where Union Products Inc., left off last year when it shuttered its plastics factory in Leominster. (AP Photo/Bizuayehu Tesfaye, File)

« U.S. moves to quarterfinals after 2-0 win over Colombia » More than 600 people have died from a three-day heatwave in southern Pakistan