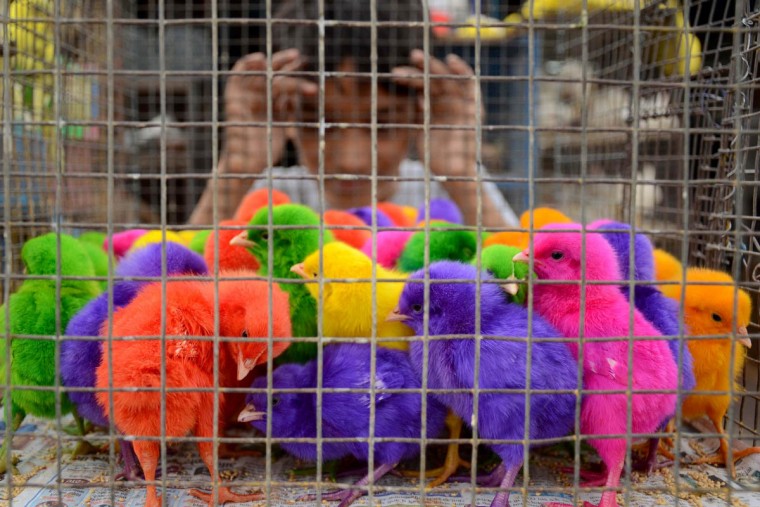 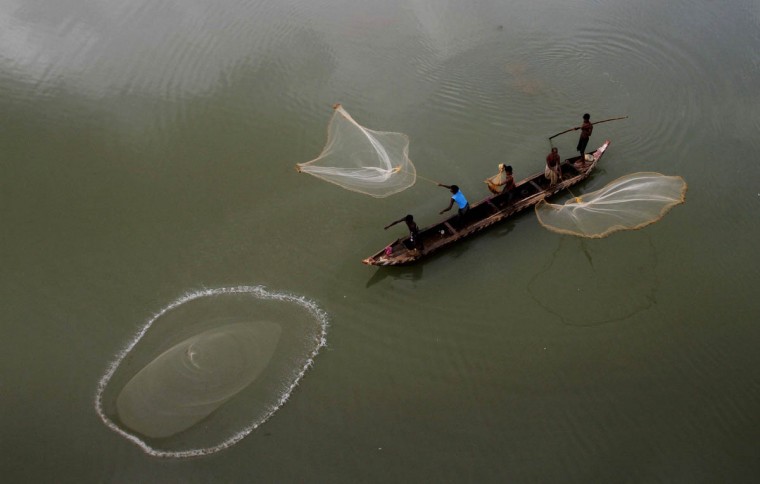 Fishermen throw in their nets into the River Mahanadi on the outskirts of Cuttack, India. Fishing is one of the main sources of livelihood for inhabitants living along the River Mahanadi. (Biswaranjan Rout/AP photo) 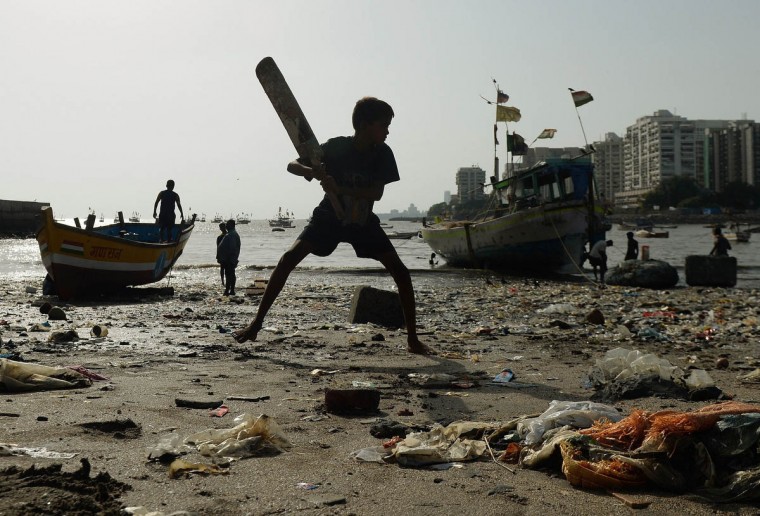 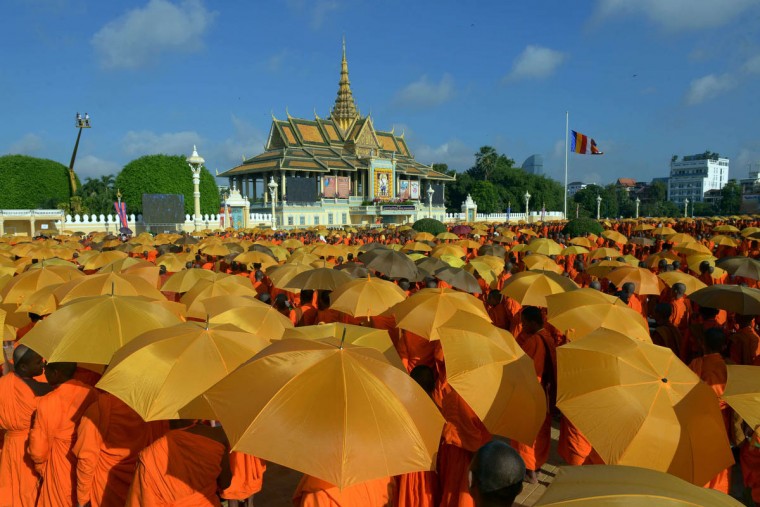 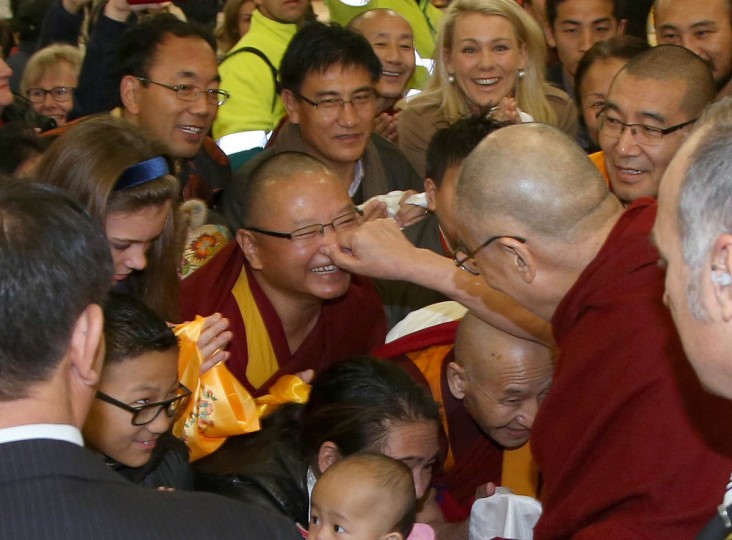 The Dalai Lama, center right, pinches the nose of a well-wisher as he arrives in Sydney. The Tibetan spiritual leader is visiting Australia for the 10th time. (Rick Rycroft/AP photo) 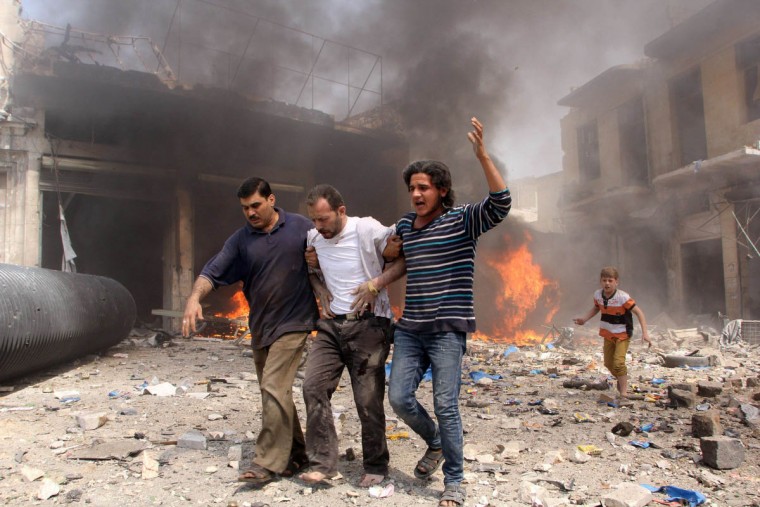 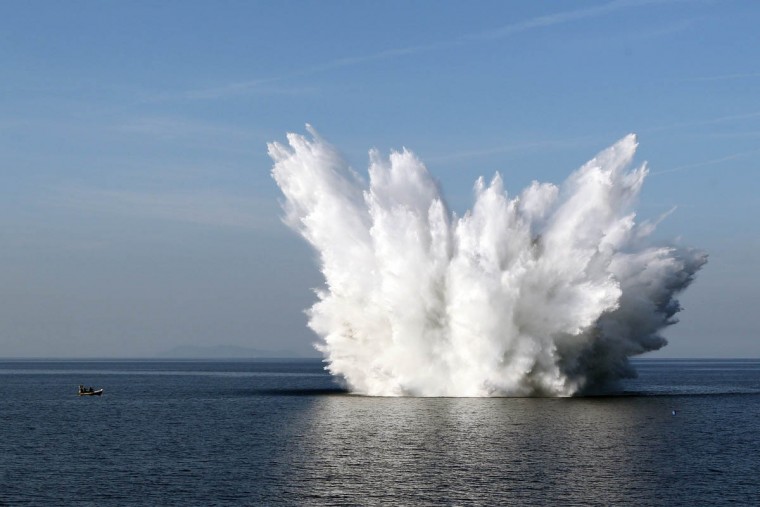 A World War II-era bomb of the US air force is detonated by the crew of French minesweeper Orion in Bastia. (Pascal Pochard-Casabianca/Getty Images) 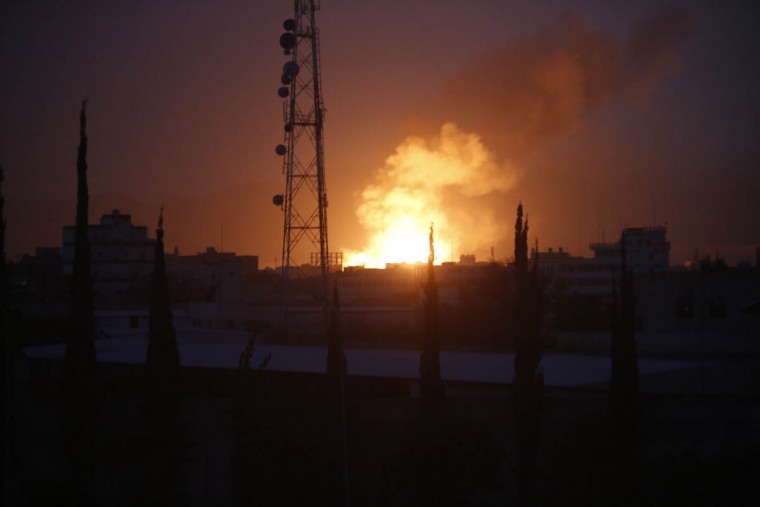 Fire and smoke rises after a Saudi-led airstrike hit a site believed to be one of the largest weapons depot on the outskirts of Yemen’s capital, Sanaa. The airstrikes and ground fighting have killed more than 1,000 civilians and displaced a half million people, according to the U.N. (Hani Mohammed/AP photo) 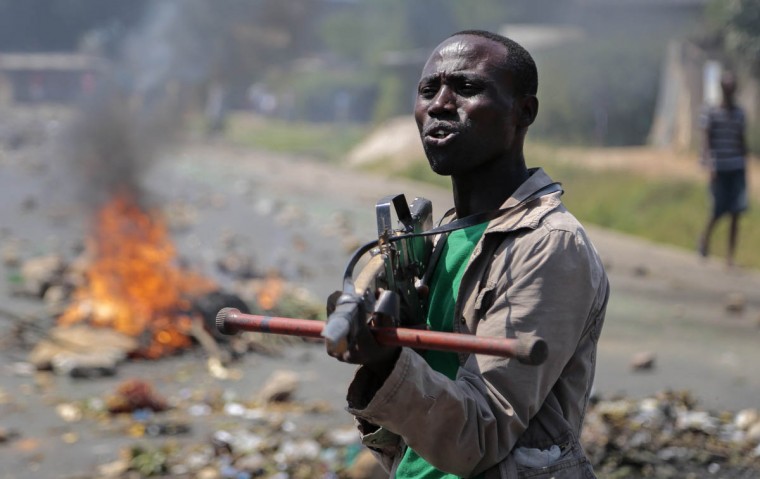 An opposition demonstrator points a mock gun made from wood towards soldiers and tells them it is shameful to shoot on people who cannot defend themselves, in the Ngagara neighborhood of the capital Bujumbura, in Burundi. Demonstrators opposed to President Pierre Nkurunziza running for a third term tried to march but were prevented by police and soldiers firing tear gas, so erected a burning barricade in their neighborhood instead. (Gildas Ngingo/AP photo) 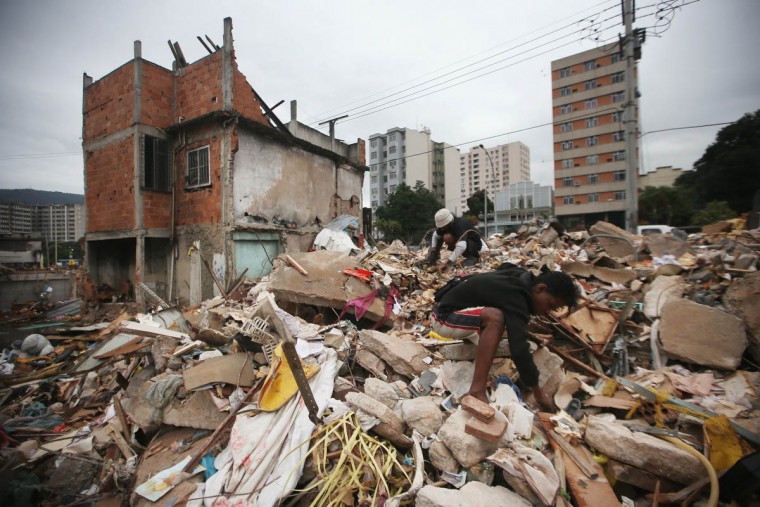 Alessandra digs through the rubble of a demolished building in the Metro-Mangueira community, or ‘favela’, located approximately 750 meters from Maracana stadium, in Rio de Janeiro, Brazil. Maracana will be the site of the opening ceremonies of the Rio 2016 Olympic Games and was the site of the 2014 World Cup final. A number of shops and properties were knocked down by authorities in the community last week with little advance notice. Evictions and demolitions have occurred in numerous other Rio communities with tangential links to the global sporting events. (Mario Tama/Getty Images) 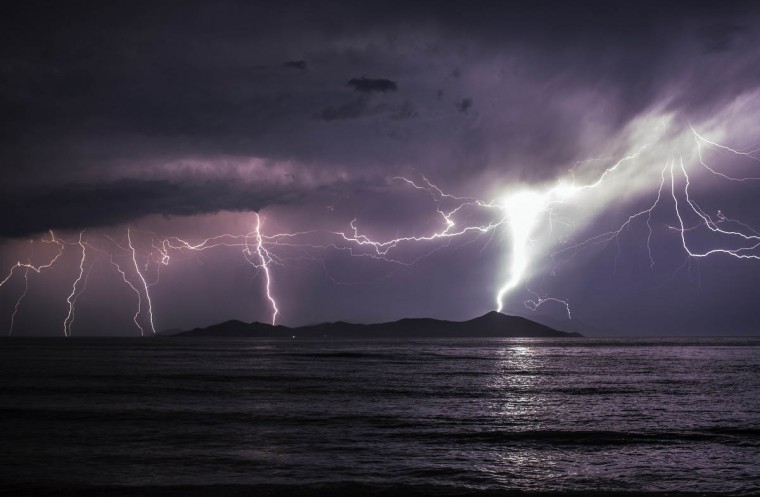 Lightning strikes over the Greek Island of Pserimos in Kos, Greece. Migrants are continuing to arrive on the Greek Island of Kos from Turkey who’s shoreline lies approximately 5 Km away. Around 30,000 migrants have entered Greece so far in 2015, with the country calling for more help from its European Union counterparts. (Dan Kitwood/Getty Images) 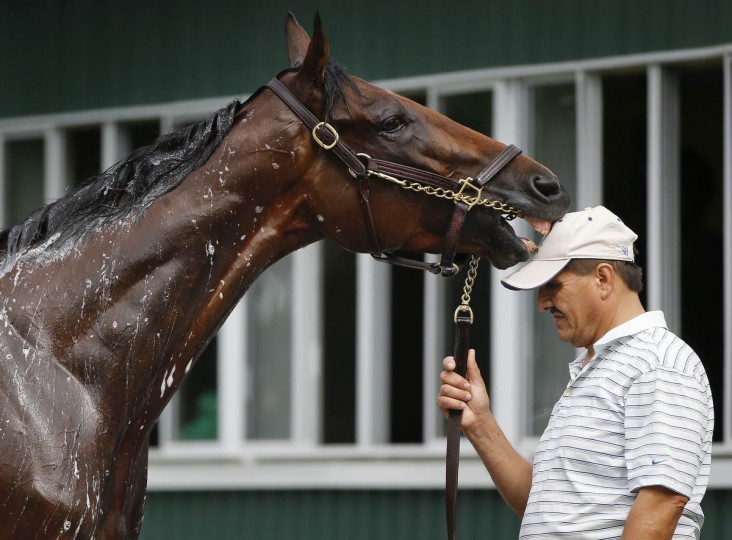 Kentucky Derby and Preakness Stakes winner American Pharoah nips at his groom’s hat during a bath after working out at Belmont Park in Elmont, N.Y. American Pharoah will try for a Triple Crown when he runs in Saturday’s 147th running of the Belmont Stakes horse race. (Julie Jacobson/AP photo) 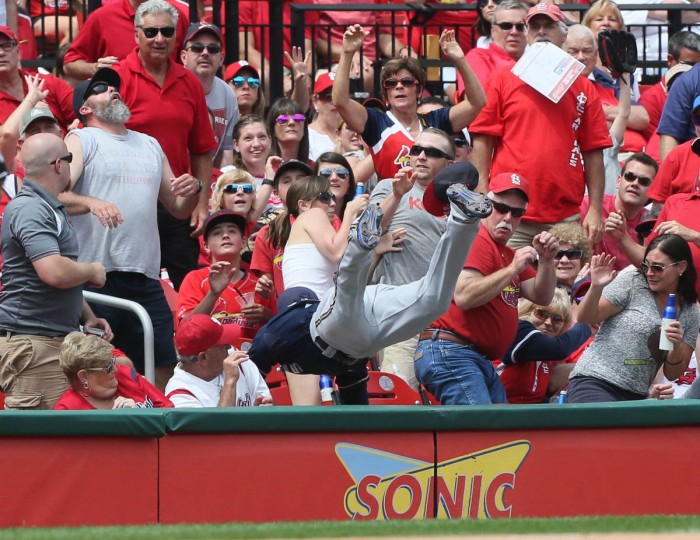 Milwaukee Brewers third baseman Hector Gomez flips into the stands while chasing a foul ball off the bat of St. Louis Cardinals’ Jason Heyward during the sixth inning of a baseball game in St. Louis. (Chris Lee/St. Louis Post-Dispatch via AP) 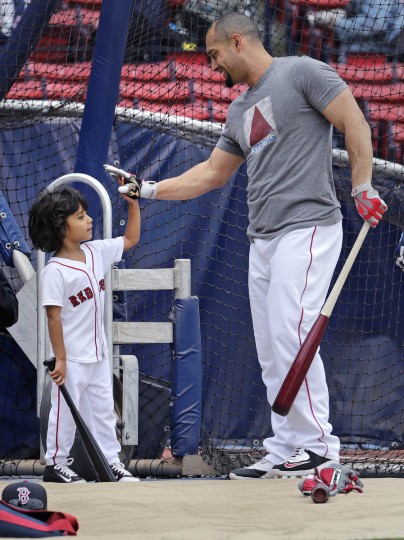 Boston Red Sox right fielder Shane Victorino gets a high-five from his son, Kingston Shane Victorino, during batting practice before the first baseball game of a doubleheader against the Minnesota Twins at Fenway Park in Boston. Victorino has been on the disabled list since May 24, with a left calf strain. (Charles Krupa/AP photo) 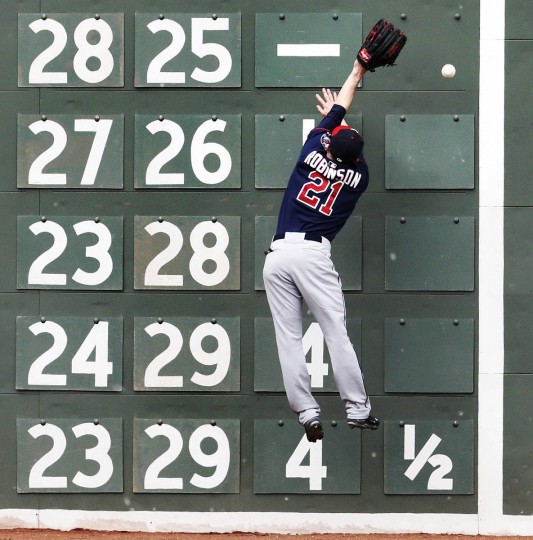 Minnesota Twins left fielder Shane Robinson leaps but can’t make the catch on a double by Boston Red Sox designated hitter David Ortiz during the third inning in the first baseball game of a doubleheader at Fenway Park in Boston. (Charles Krupa/AP photo) 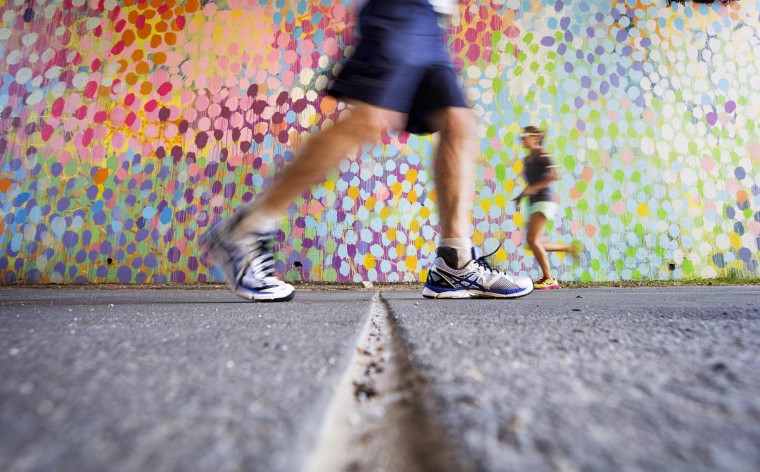 Joggers run past a painted mural along the BeltLine in Atlanta. Today marks National Running Day, celebrated annually on the first Wednesday in June. National Running Day was created in 2009 by some of the county’s biggest running clubs and organizations to draw attention to the benefits of the activity. (David Goldman/AP photo) 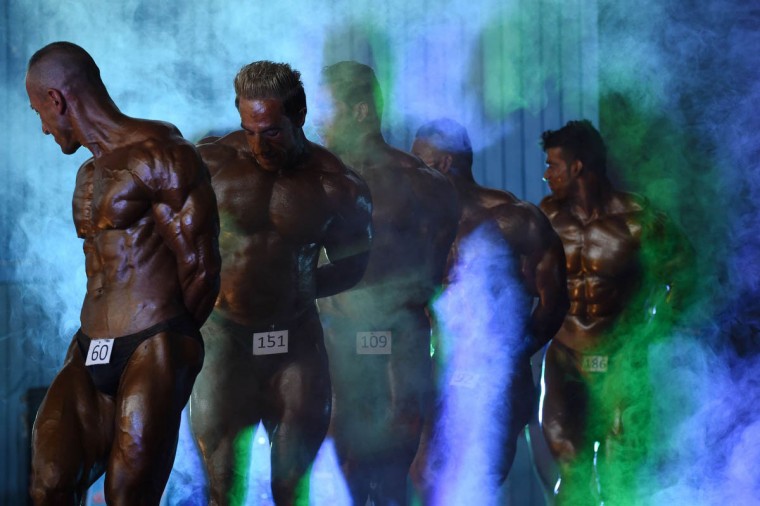 Afghan bodybuilders participate in the Mr Afghanistan nation wide bodybuilding competition in Kabul. Bodybuilding is one of the country’s most popular sports, even permitted during the 1996-2001 Taliban regime. (Shah Marai/Getty Images) 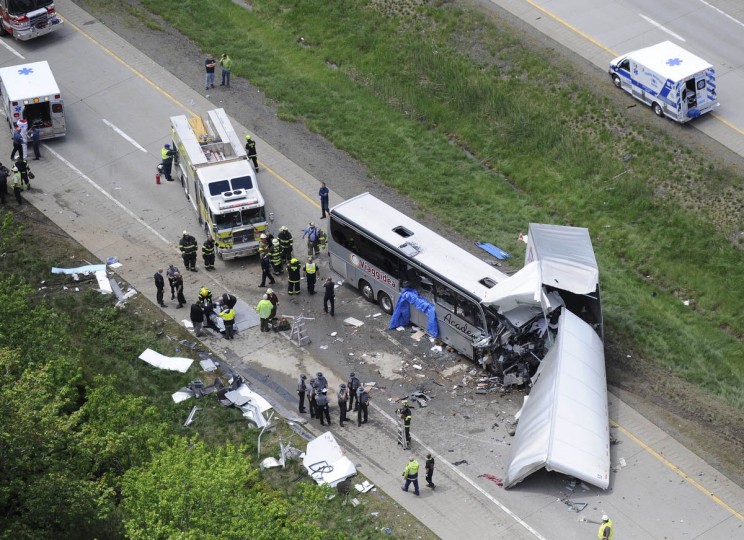 Authorities investigate the scene of a fatal collision between a tractor-trailer and a tour bus on Interstate 380 near Mount Pocono, Pa. Multiple people were killed more than a dozen were sent to hospitals. (David Kidwell/AP photo) 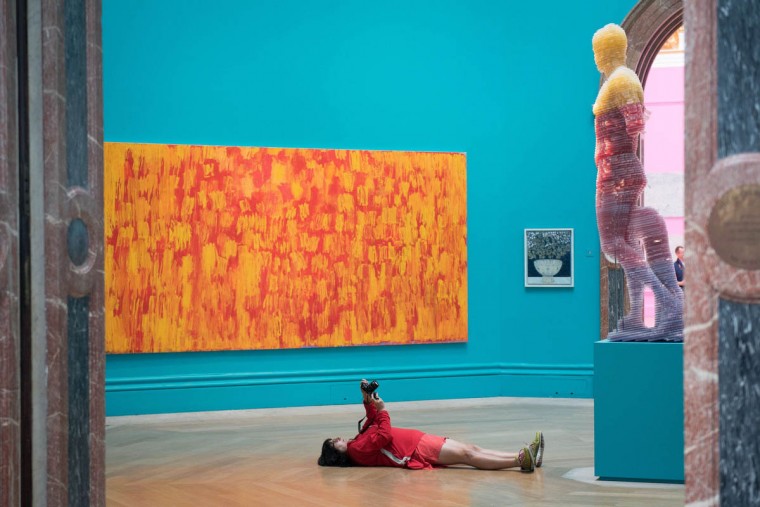 A photographer lies on the floor underneath “Can’t or Won’t?” (Left) by British arist Christopher Le Brun to take a photograph during the press preview of the Royal Academy Summer Exhibition. This year, the annual event features over 1,100 works, comprising painting, sculpture, photography, printmaking, architecture and film. The Summer Exhibition runs from June 8 to August 16, 2015. (Leon Neal/Getty Images) 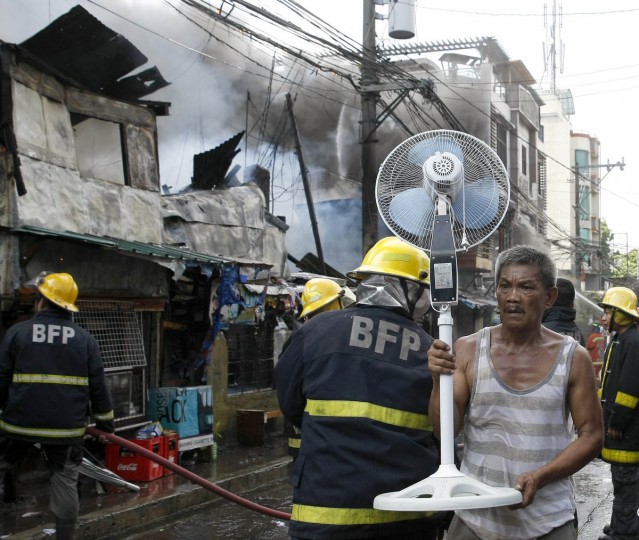 A resident saves an electric fan as firemen battle a fire that engulfs a neighborhood of informal settlers in suburban Quezon city, northeast of Manila, Philippines. Fire officials say the fire gutted close to a hundred houses and affected around 300 families. The fire occurred three weeks after a footwear factory fire killed 72 people in suburban Valenzuela city, north of Manila, and prompted the Government to inspect 300,000 factories for compliance of fire safety rules. (Bullit Marquez/AP photo) 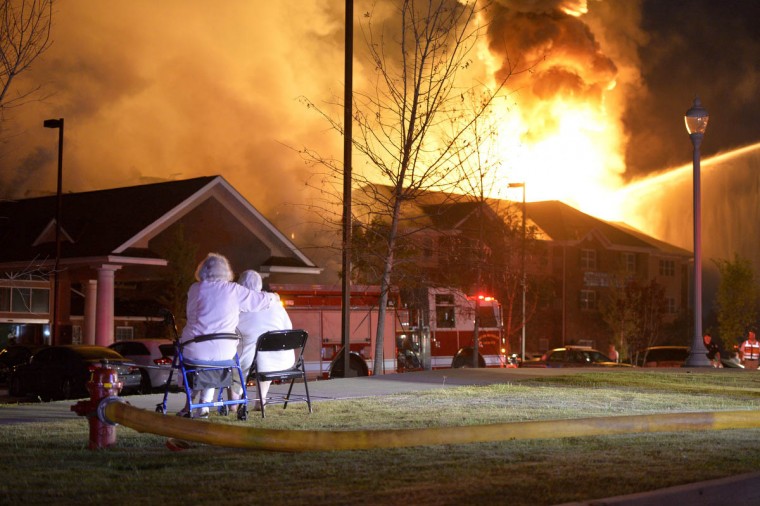 Residents watch as the Marshall Square Retirement Resort goes up in flames in Evans, Ga. Officials say two residents of Marshall Square retirement community are unaccounted for after fire destroyed much of the building in the morning, according to the Augusta Chronicle. More than 80 residents of the upscale retirement resort in the heart of Evans were forced to flee for safety when fire alarms went off between 3 and 3:30 a.m. (Michael Holahan /The Augusta Chronicle via AP) 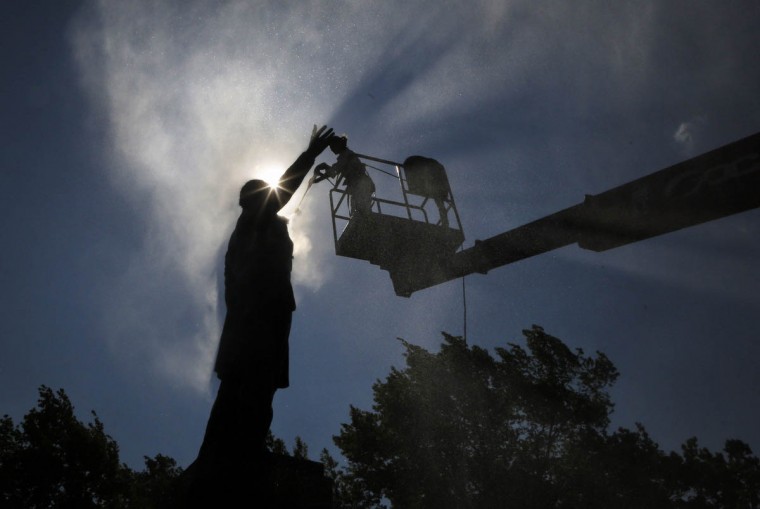 A worker washes a monument to famous Russian poet Aleksander Pushkin during preparations to celebrate the 216th anniversary of his birth in St. Petersburg, Russia. (Dmitry Lovetsky/AP photo)