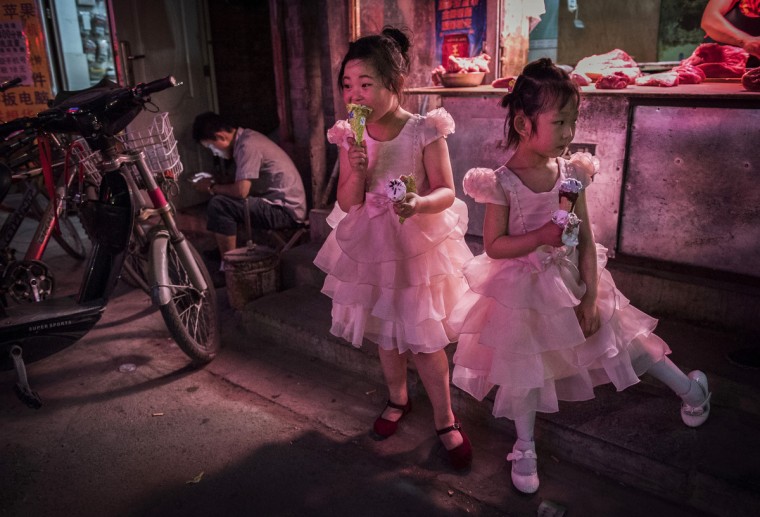 Chinese girls dressed for a party eat ice cream as they stand in front of a butcher shop in a residential street on May 27, 2015 in Beijing, China. (Kevin Frayer/Getty Images) 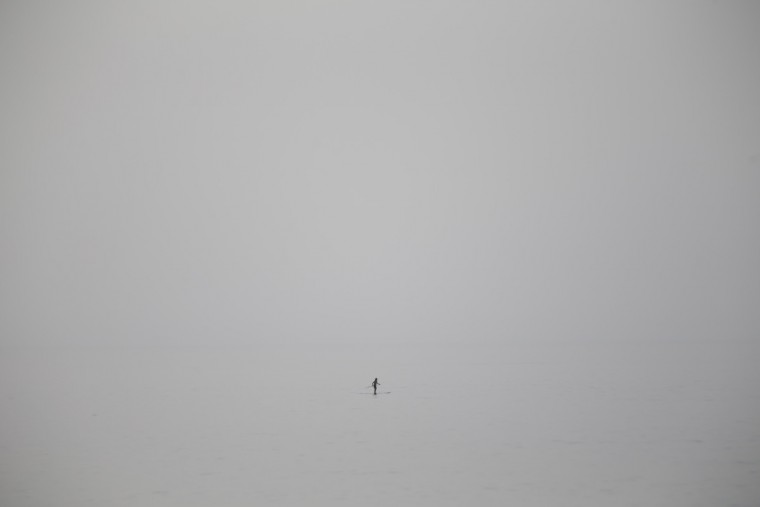 A man paddles on a board as haze and sand cover in the Mediterranean sea off Tel Aviv, Israel, Wednesday, May 27, 2015. Temperatures are soaring across the Middle East with temperatures reaching about 42 degrees Celsius (107.6 degrees Fahrenheit) in Tel Aviv. (AP Photo/Ariel Schalit) 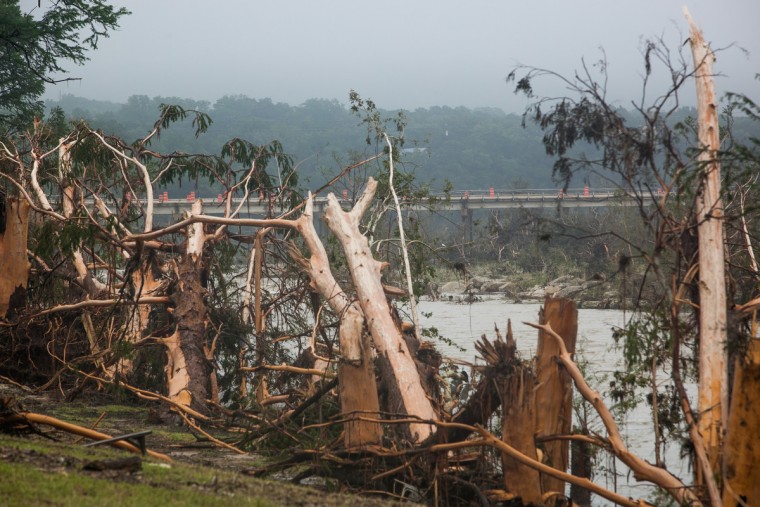 Debris is strewn along Ranch Road 12 near the Blanco River May 26, 2015 in Wimberley, Texas. Central Texas has been hit with severe weather, including catastrophic flooding and tornadoes over the past several days. (Drew Anthony Smith/Getty Images) 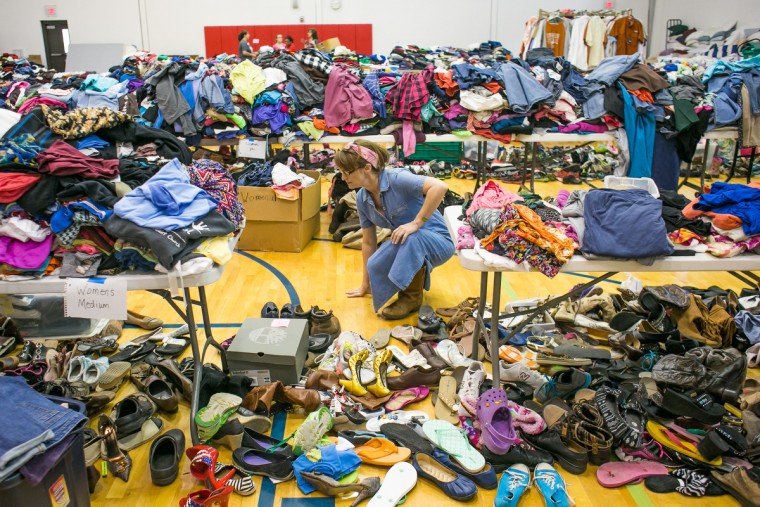 Melinda Ellisor looks for clothing to give to a family of flood victims at Wimberley High School May 26, 2015 in Wimberley, Texas. Faculty and volunteers gathered at the school to organize flood relief supplies. Central Texas has been hit with severe weather, including catastrophic flooding and tornadoes over the past several days. (Drew Anthony Smith/Getty Images) 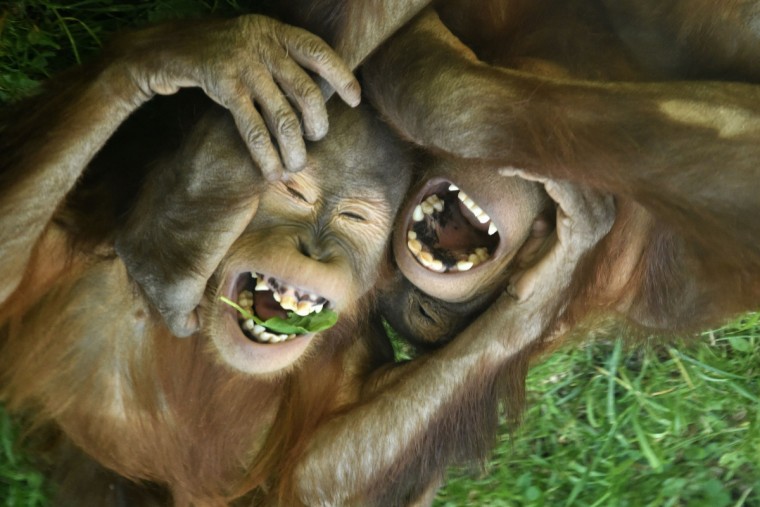 Sumantran orangutans play in their enclosure at Moscows Zoo on May 27, 2015. The temperatures in Moscow reached today 28 C (82 F). (Kirill Kudryavtsev/Getty Images) 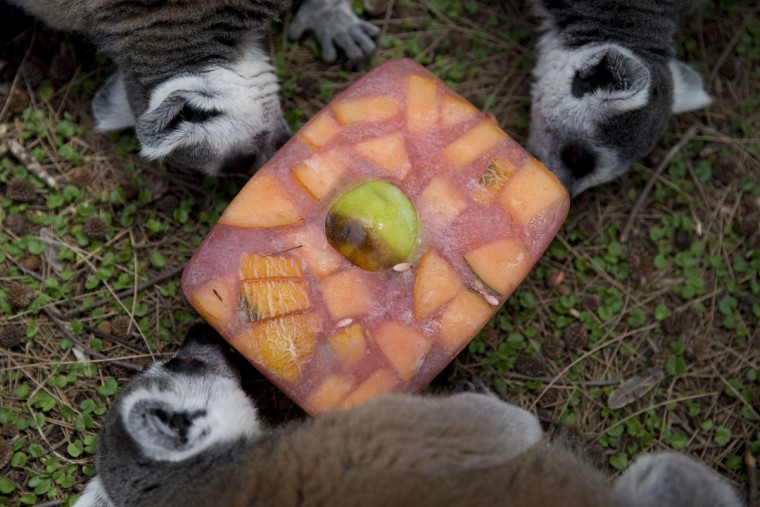 Lemurs eat an ice block of frozen fruits and vegetables to cool off from the heat at the Ramat Gan Safari near Tel Aviv, Israel, Wednesday, May 27, 2015. Temperatures are soaring across the Middle East with temperatures reaching about 42 degrees Celsius (107.6 degrees Fahrenheit) in Tel Aviv. (AP Photo/Ariel Schalit) 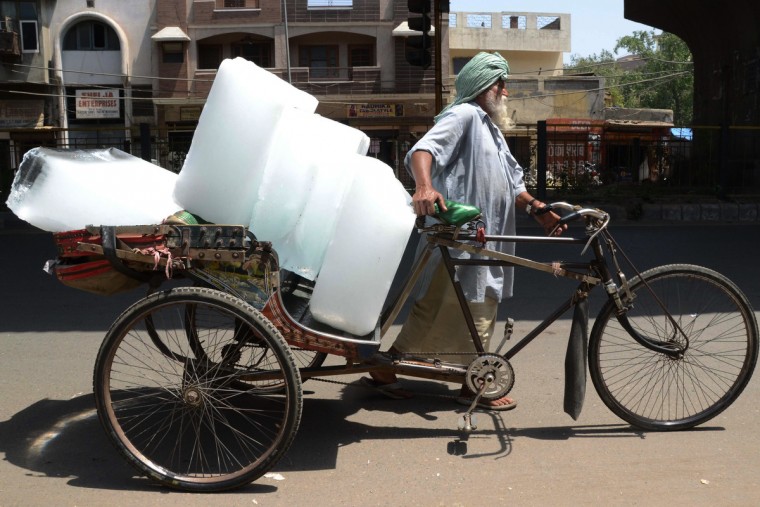 An Indian worker uses a ricksahaw to transport ice from an ice factory in Amritsar on May 27, 2015. More than 1,100 people have died in a blistering heatwave sweeping India, authorities said May 27, 2015, as forecasters warned searing temperatures would continue. (Narinder Nanu/Getty Images) 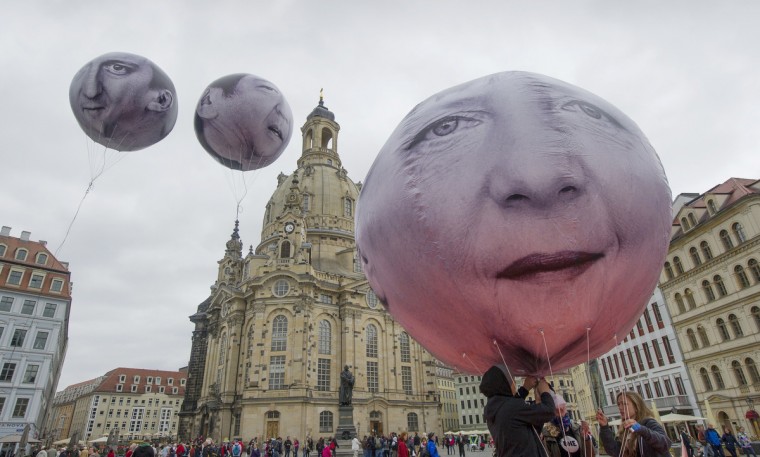 Balloons depicting German Chancellor Angela Merkel (R), British Prime Minister David Cameron (L) and Japanese Prime Minister Shinzo Abe are lifted during a protest by the international campaigning and advocacy organization ONE in front of Church of our Lady (Frauenkirche) before the start of a G7 meeting of finance ministers, on May 27, 2015 in Dresden, eastern Germany. The finance ministers and central bank governors of the Group of Seven (G7) countries meet in Dresden to discuss the health of the global economy and financial regulation, but Greece is also almost certainly to be on the agenda. (Robert Michael/Getty Images) 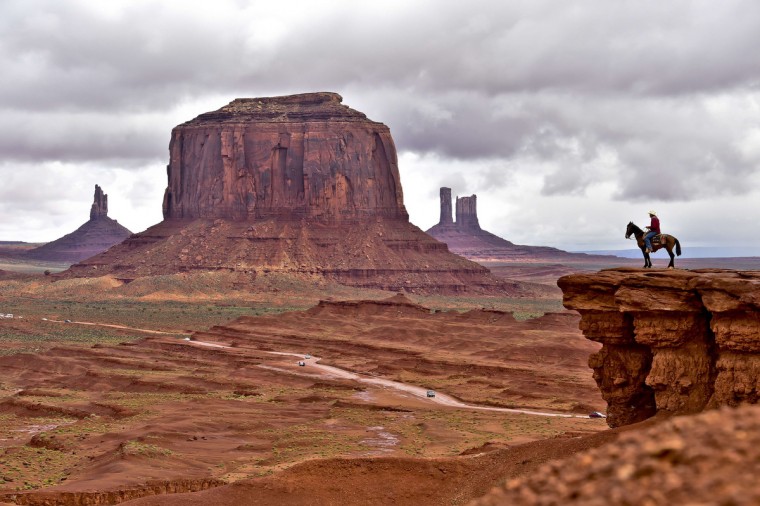 A Navajo man on a horse poses for tourists in front of the Merrick Butte in Monument Valley Navajo Tribal Park, Utah. (Mladen Antonov/Getty Images) 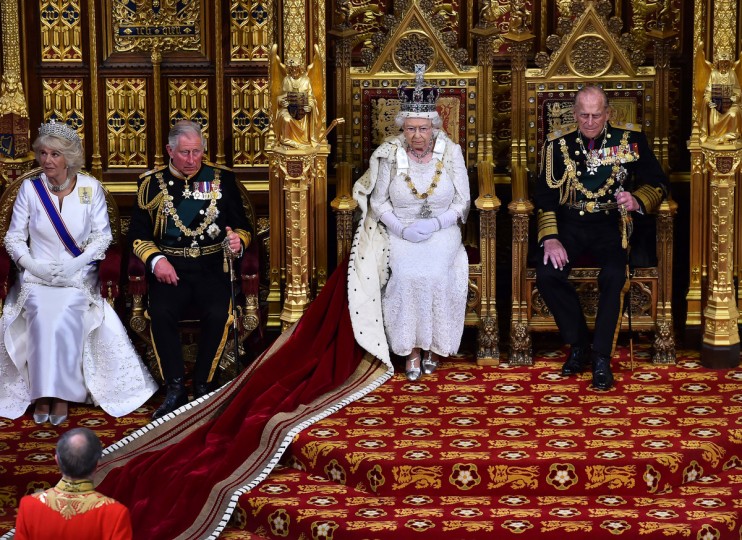 Britain’s Queen Elizabeth II, 2nd right, seated on the throne in the House of Lords next to her husband, Prince Philip, Duke of Edinburgh, right, son, Prince Charles, Prince of Wales, 2nd left and his wife Camilla, Duchess of Cornwall, prepares to deliver the Queen’s Speech during the State Opening of Parliament at the Palace of Westminster in London Wednesday, May 27, 2015. The State Opening of Parliament marks the formal start of the parliamentary year and the Queen’s Speech sets out the governments agenda for the coming session. (Ben Stansall/Pool Photo via AP) 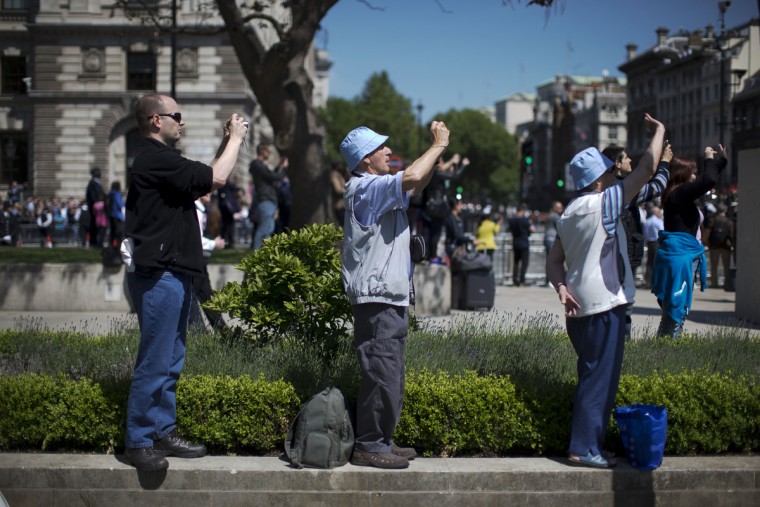 People wave and take pictures as a horse-drawn carriage carrying Britain’s Queen Elizabeth II in a procession leaves the Houses of Parliament to go to Buckingham Palace in London, Wednesday, May 27, 2015. Britain’s first all-Conservative government in two decades unveiled its plans for power Wednesday, including laws to hold a referendum on European Union membership, give Scotland more autonomy and toughen immigration policies. The list of proposed legislation was read by Queen Elizabeth II at the State Opening of Parliament, an annual blend of politics and pomp. (AP Photo/Matt Dunham) 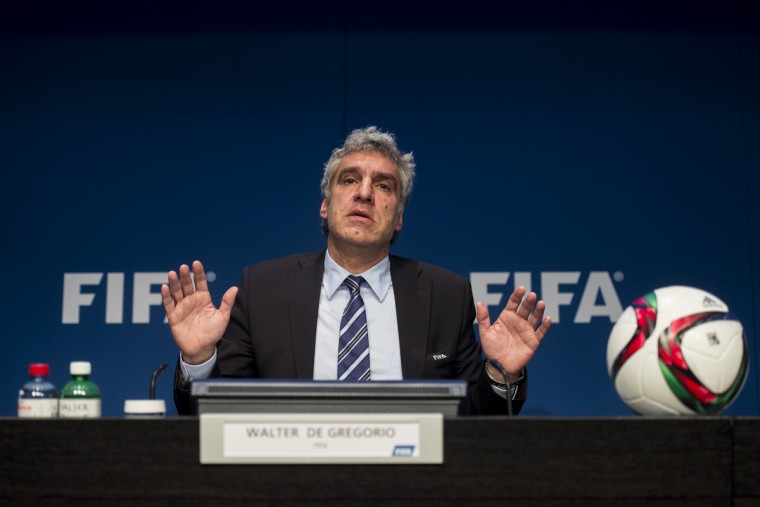 Walter De Gregorio, FIFA Director of Communications and Public Affairs, addresses the media during a press conference at the FIFA headquarters in Zurich, Switzerland, Wednesday, May 27, 2015. Swiss federal prosecutors opened criminal proceedings related to the awarding of the 2018 and 2022 World Cups, throwing FIFA deeper into crisis only hours after seven soccer officials were arrested and 14 indicted Wednesday in a separate U.S. corruption probe. (Ennio Leanza/Keystone via AP) 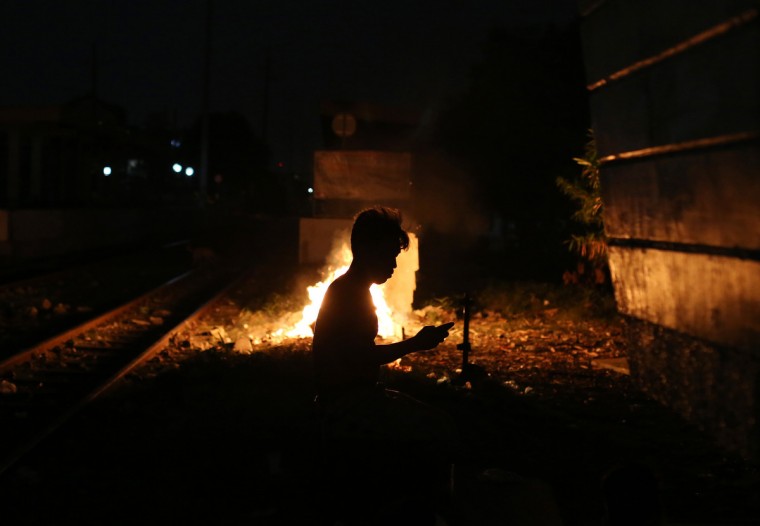 Filipino Juanito Bandong uses his smartphone beside a bonfire along the railroad tracks in Manila, Philippines, Wednesday, May 27, 2015. Bandong and his family lived for years beside the railroad tracks until they were evicted by the government and placed at a relocation site in Cavite province. He returns to Manila for work and sleeps beside the tracks near the location of his former home. (AP Photo/Aaron Favila) 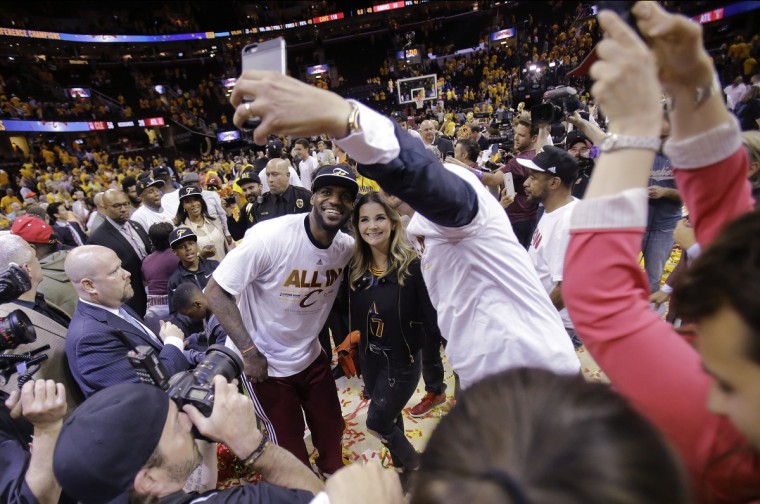 Cleveland Cavaliers forward LeBron James poses for a selfie with fans after the Cavaliers defeated the Atlanta Hawks 118-88 in Game 4 of the NBA basketball Eastern Conference finals for a sweep, Tuesday, May 26, 2015, in Cleveland. (AP Photo/Tony Dejak) 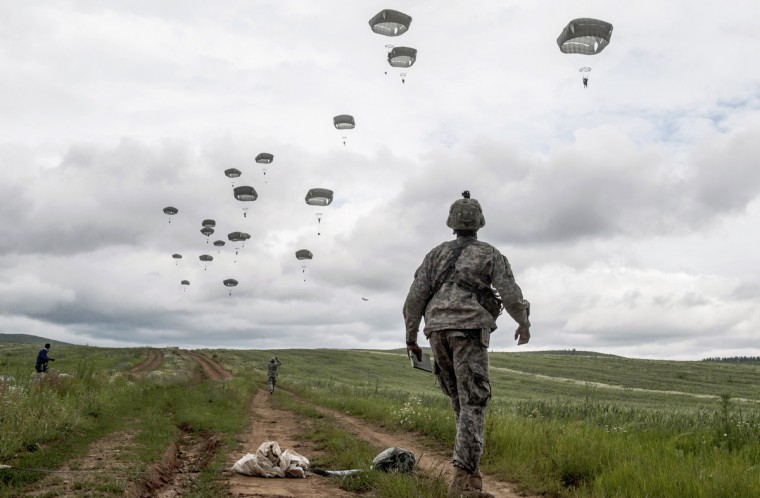 US para-troopers of the Army’s 4th 25 Infantry Brigade Combat Team (Airborne), part of the NATO-led peacekeeping mission in Kosovo (KFOR) jump with parachute during a military drill near the village of Ramjan on May 27, 2015. (Armend Nimani/Getty Images) 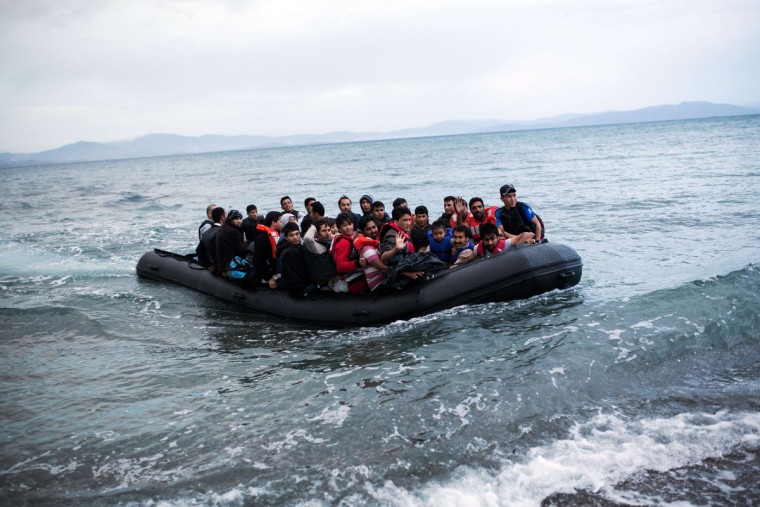 A dinghy overcrowded with Afghan immigrants arrived on a beach on the Greek island of Kos, after crossing a part of the Aegean Sea between Turkey and Greece. (Angelos Tzortzinis/Getty Images) 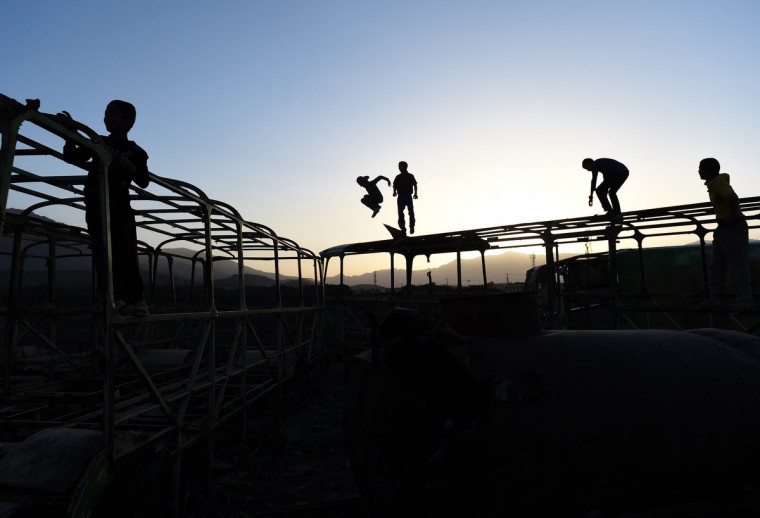 Afghan children play on remnants of old cars near Darul Aman Palace in Kabul once the residence of former Afghan king Amanullah Khan between 1920-1929, in Kabul on August 22, 2014. The Darul Aman palace, built in the 1920s, was set on fire during the Communist coup of 1978. It was damaged again as rival Mujahedeen factions fought for control of Kabul during the early 1990s. Heavy shelling by the Mujahedeen after the end of the Soviet invasion left the palace a gutted ruin. (Farshad Usyan/Getty Images) 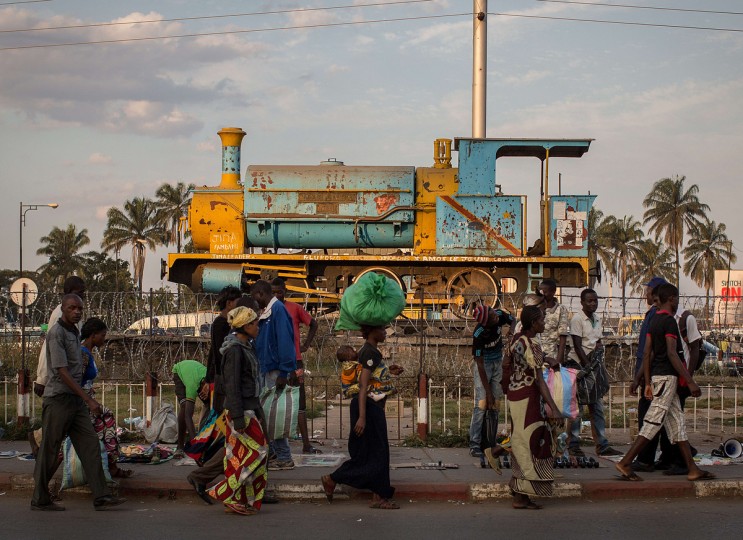 An old locomotive is displayed as a monument in Lubumbashi. (Frederico Scoppa/Getty Images) 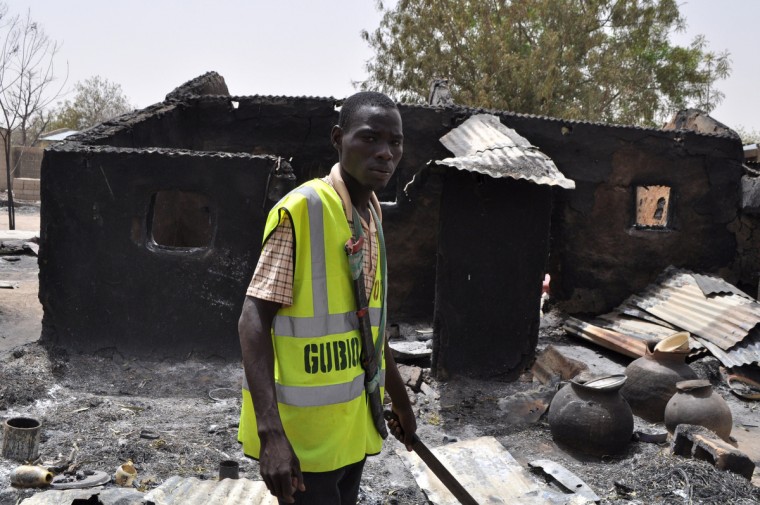 A vigilante stands in front of a burnt mud house in Gubio in Borno State, northeast Nigeria, on May 26, 2015. A weekend attack by Boko Haram in the northeast Nigerian town of Gubio left 37 people dead, with more than 400 buildings destroyed by fire, local vigilantes said on May 26. Boko Haram, which wants to create a hardline Islamic state in northeast Nigeria, has been pushed out of captured towns and territory since February by Nigerian troops with assistance from Niger, Chad and Cameroon. (Getty Images) 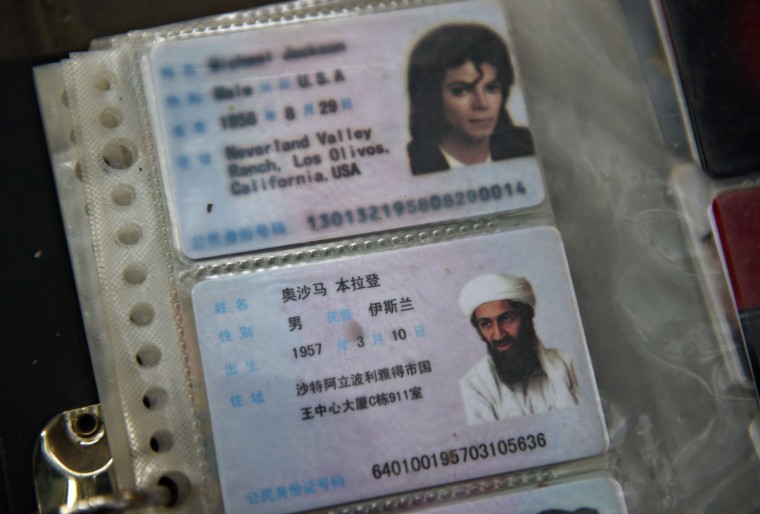 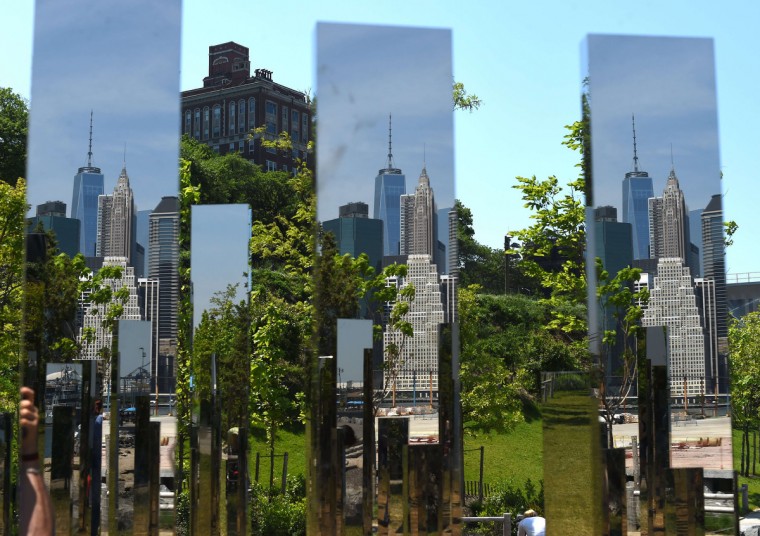 Lower Manhattan is reflected in a series of mirrors May 26, 2015 as part of art installation by Danish artist Jeppe Hein situated around the waterfront in Brooklyn Bridge Park until April 17, 2016. The public art fund presents “Please touch the art”, an exhibition of 18 interactive sculptures including social benches, rooms made of jetting water, and a mirror maze. (Timothy A. Clary/Getty Images)

« Remembering Mary Ellen Mark » The ‘bones’ of 4,000 planes in Arizona