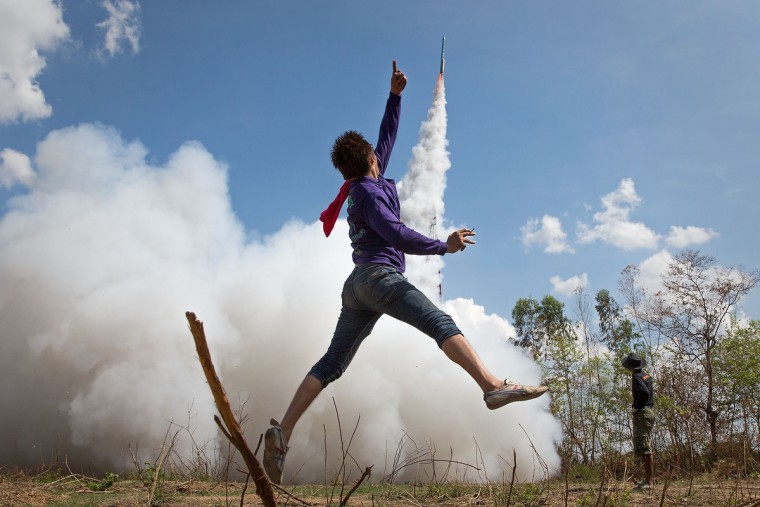 A young Thai man jumps in the air and cheers as his rocket takes off at the Bun Bang Fai Rocket Festival on May 10, 2015 in Yasothon, Thailand. During the Bun Bang Fai rocket festival, Thai residents launch enormous home-made rockets into the air to gain Buddhist merit and to celebrate the beginning of the rainy season. (Taylor Weidman/Getty Images) 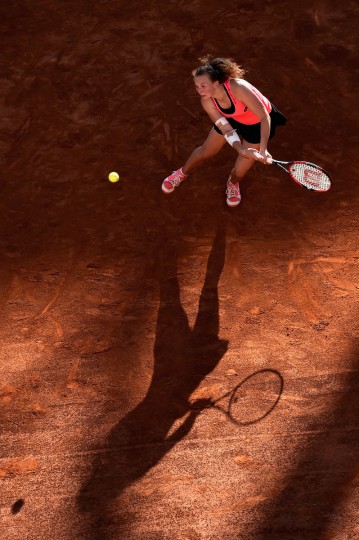 Katerina Siniakova of Czech Republic on her way to victory against Kristina Mladenovic of France during Day One of The Internazionali BNL d’Italia 2015 at the Foro Italico on May 10, 2015 in Rome, Italy. (Mike Hewitt/Getty Images) 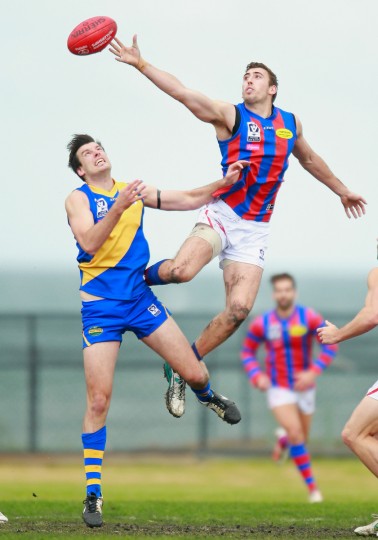 Sam Gilmore of Port Melbourne competes for the ball during the round four VFL match between Williamstown and Port Melbourne at Burbank Oval on May 10, 2015 in Melbourne, Australia. (Scott Barbour/AFL Media/Getty Images) 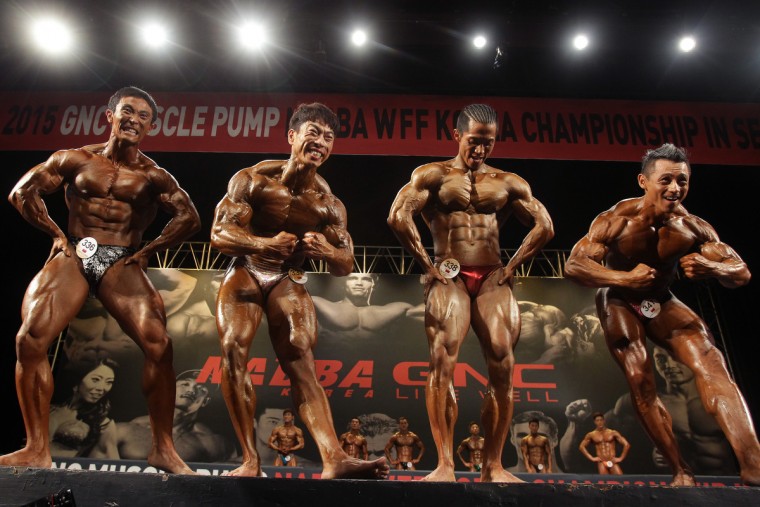 Contestants pose for judges during the NABBA WFF Korea Championship on May 10, 2015 in Seoul, South Korea. (Chung Sung-Jun/Getty Images) 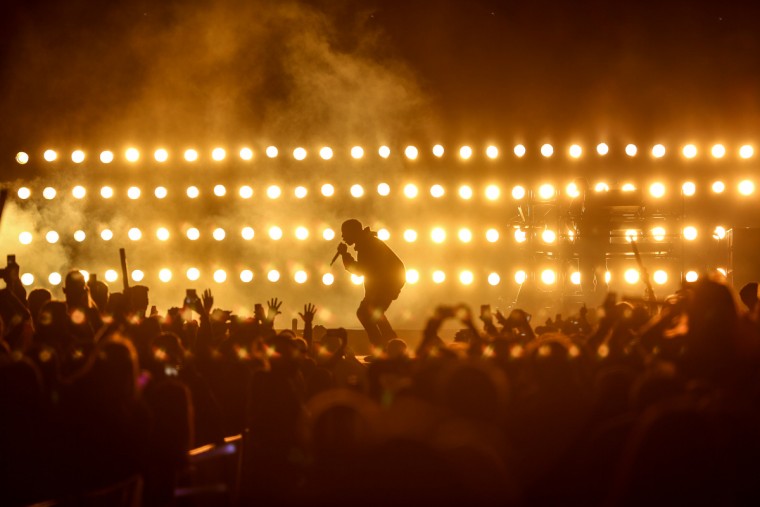 Kanye West performs at Wango Tango 2015 at StubHub Center on Saturday, May 9, 2015, in Carson, Calif. (Photo by Rich Fury/Invision/AP) 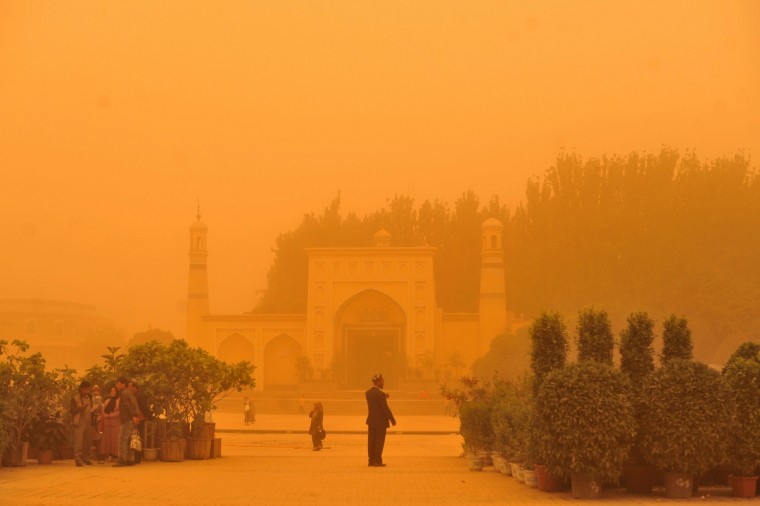 A Uighur man looks at plants outside a mosque during a sandstorm in Kashgar city in northwestern China’s Xinjiang Uighur Autonomous Region, SundaY, May 10, 2015. (Chinatopix Via AP) 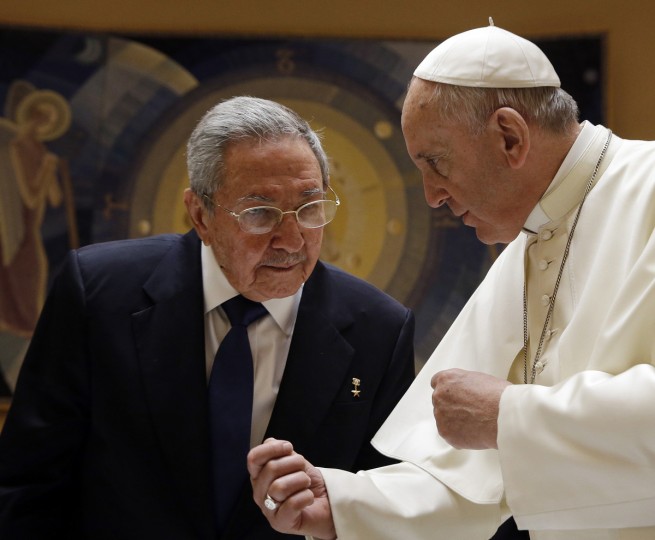 Pope Francis (R) talks with Cuban President Raul Castro during a private audience at the Vatican on May 10, 2015. Cuban President Raul Castro arrived at the Vatican on Sunday to thank Pope Francis for his role in brokering the rapprochement between Havana and Washington. The first South American pope played a key role in secret negotiations between the United States and Cuba that led to the surprise announcement in December that they would seek to restore diplomatic ties after more than 50 years of tensions. (Gergorio Borgia/Getty Images) 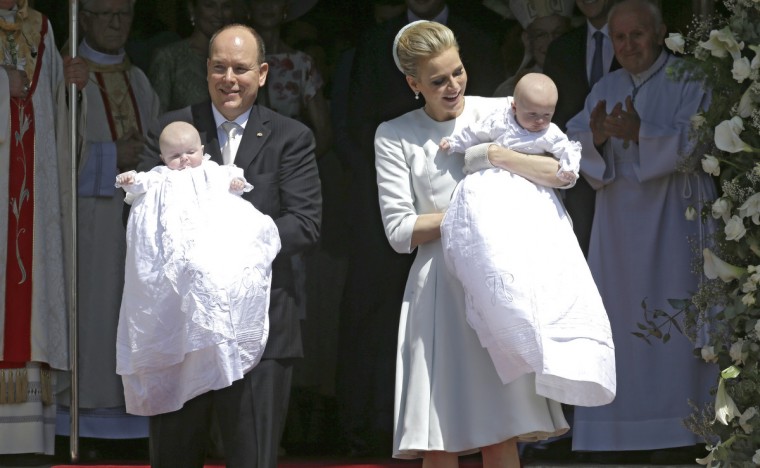 Prince Albert II of Monaco and his wife Princess Charlene pose with their twins babies Princess Gabriella, left, and Prince Jacques, right, after their baptism ceremony in the Cathedral of Monaco, Sunday, May 10, 2015, in Monaco. Monaco’s newest royals Prince Jacques Honore Rainier and Princess Gabriella Therese Marie were christened at a ceremony in Monaco on Sunday. Crowds turned out in their thousands to catch a glimpse of the twins and their parents Prince Albert II and Princess Charlene. (AP Photo/Lionel Cironneau) 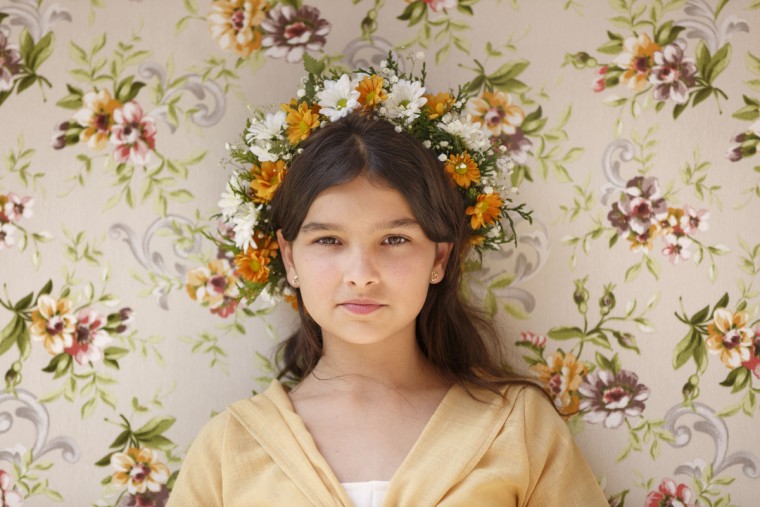 A ‘Maya’ girl sits in an altar during the traditional celebration of ‘Las Mayas’ on the streets in Madrid, Spain Sunday, May 10, 2015. The festivity of the Maya comes from pagan rites and dates from the medieval age, appearing in ancient documents. It takes place every year in the beginning of May and celebrates the beginning of the spring. Girls between 7 and 11 years old are chosen as ‘Maya’ and should sit still, serious and quiet for a couple of hours in altars on the street decorated with flowers and plants and afterwards they walk to the church with their family where they attend a ceremony. (AP Photo/Daniel Ochoa de Olza) 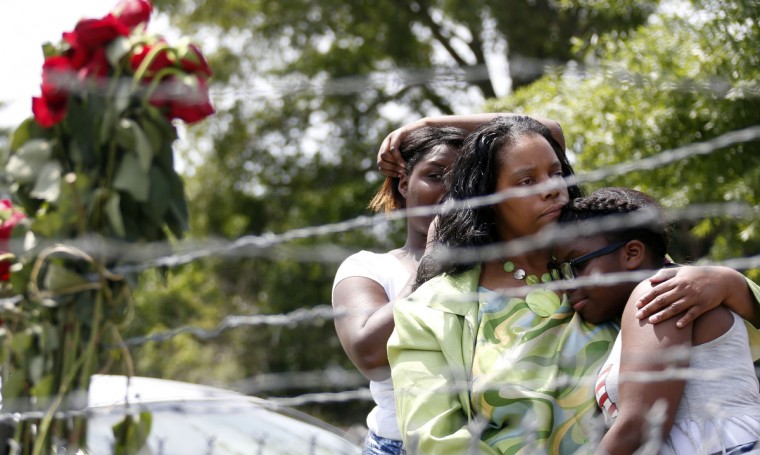 Area residents Alberta Harris, center, and Waynetta Theodore, left, and Christiena Preston, console each other as they pay their respects at a makeshift memorial, near the site where two Mississippi police officers were killed, Sunday, May 10, 2015, in Hattiesburg, Miss. The officers were shot to death during an evening traffic stop turned violent, a state law enforcement spokesman said Sunday. Three suspects were in custody, including two who are charged with capital murder. (AP Photo/Rogelio V. Solis) 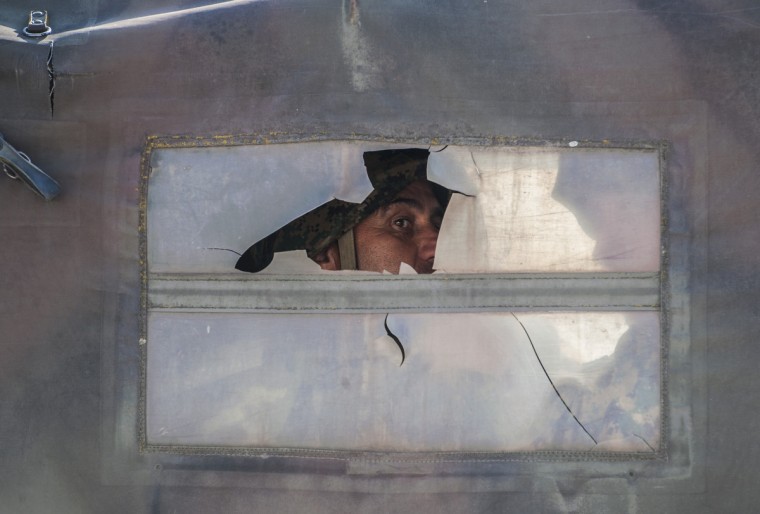 A Macedonian police officer looks out of a ripped truck window in Kumanovo on May 10, 2015. Shooting broke out for a second day on May 10 in north Macedonia as concern mounted in Europe after clashes between police and unidentified gunmen that erupted on May 9 at dawn in the restive north of Macedonia. Eight policemen and 14 gunmen have been killed in two days of clashes, police said on Sunday. (Armend Nimani/Getty Images) 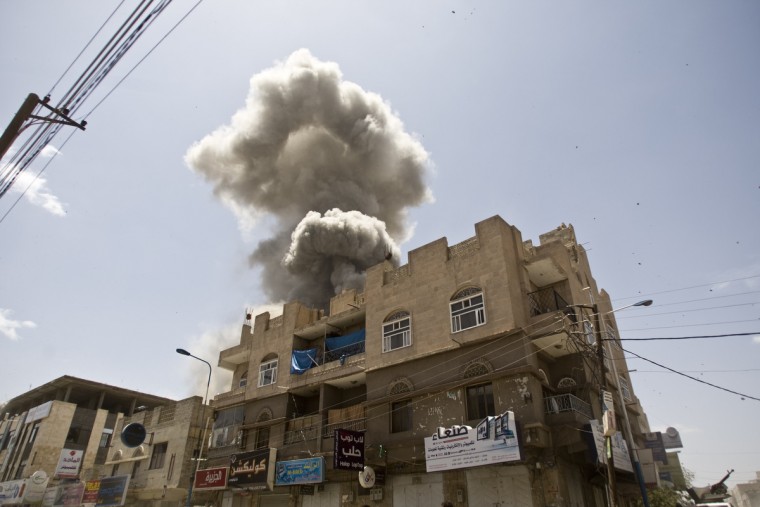 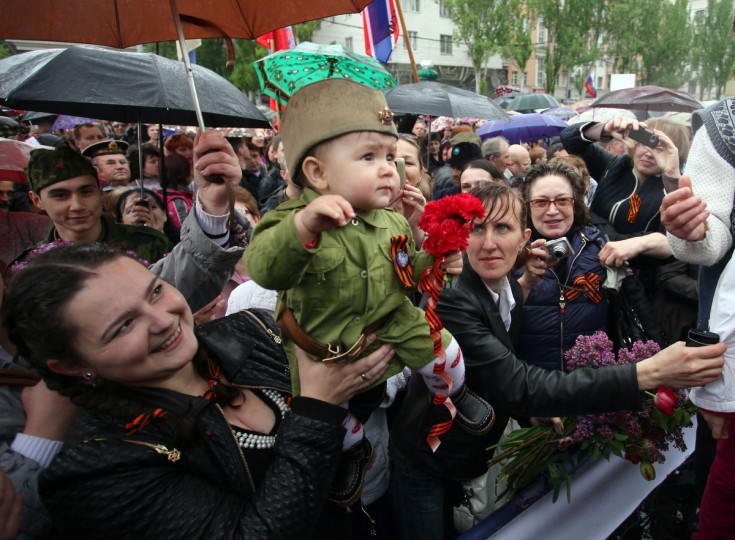 People take part in the Victory Day parade of the self-proclaimed Donetsk People’s Republic in Donetsk on May 9, 2015. Tanks and rocket systems rolled through the rebel bastion of Donetsk in east Ukraine on May 9 as pro-Russian insurgents celebrated the 70th anniversary of the Soviet win over Nazi Germany in WWII. Imitating a vast military parade being held simultaneously in Moscow, some 1,500 separatist fighters marched through the rebel-held city clutching red Soviet flags and portraits of Stalin. (Alesksey Filippov/Getty Images) 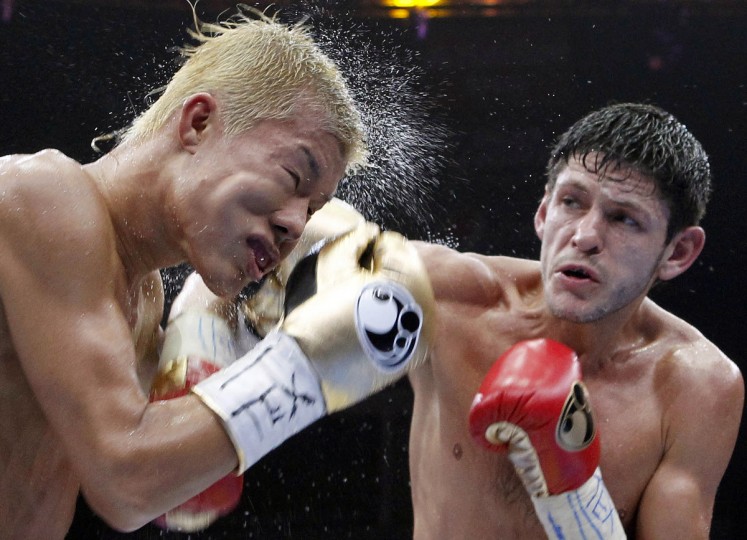 Tomoki Kameda, left, is struck by Jamie McDonnell during the eighth round of their bantamweight bout Saturday May 9, 2015, in Hidalgo, Texas. McDonnell won the bout. (Nathan Lambrecht/The Monitor via AP) 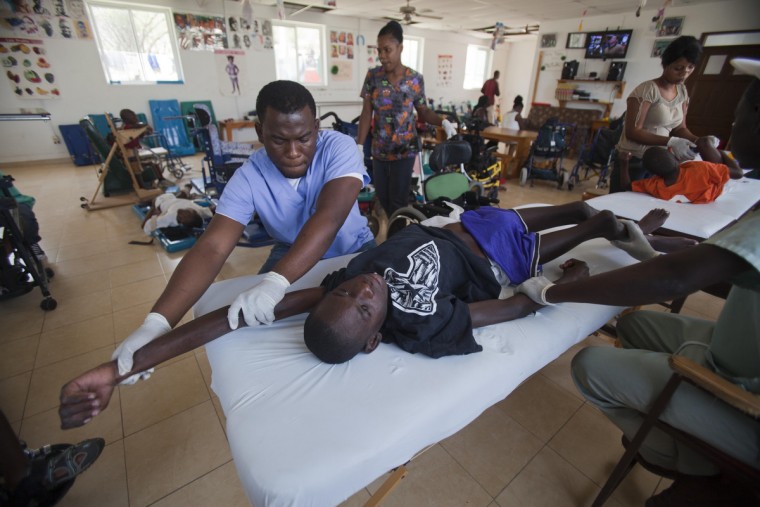 Therapist Maurelus Samy Stanley works with Pierre Rooselt, who suffers sickle cell anemia, inside the therapy room at the Mercy & Sharing residential center in the community of Williamson, Arcahaie, Haiti. Like many residents at the center, the 22-year-old was abandoned by his parents at a government hospital before his first birthday. (AP Photo/Dieu Nalio Chery) 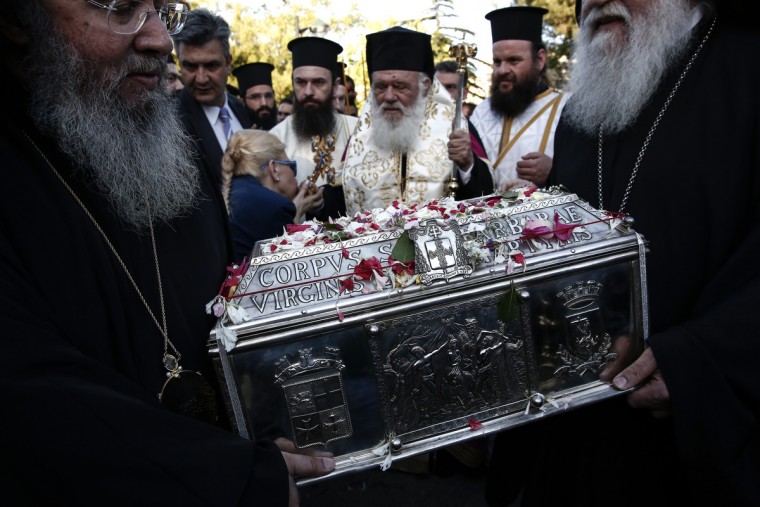 A woman kisses Orthodox Archbishop Ieronymos, center, as he escorts the holy relics of Saint Great Martyr Barbara during a procession to the church of Saint Barbara at Egaleo suburb, west of Athens, on Sunday, May 10, 2015. The relics, which were kept in Italy, were transferred for the first time in a thousand years to an Orthodox country, with the consent of the Roman Catholic Patriarch of Venice together with the Vatican permission. (AP Photo/Yorgos Karahalis) 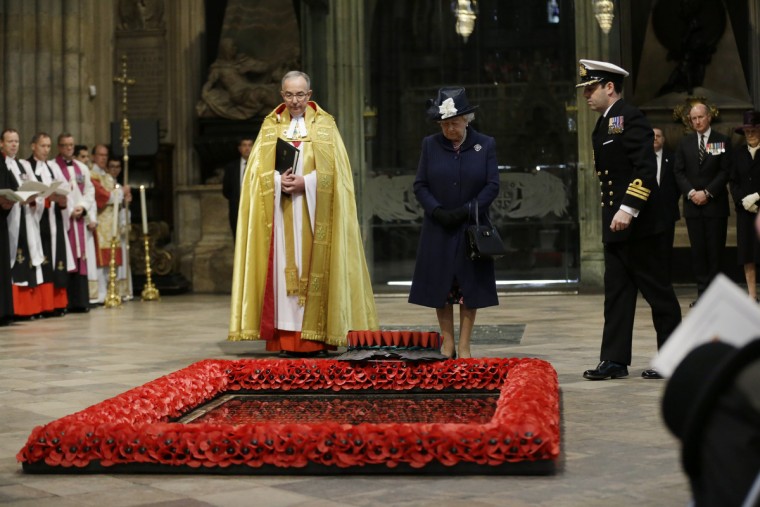 Britain’s Queen Elizabeth II looks down after a wreath was laid on her behalf at the Grave of the Unknown Warrior flanked by the Dean of Westminster John Hall, left, at the start of a service of thanksgiving to mark the World War II, 70th anniversary of Victory in Europe (VE Day) at Westminster Abbey in London, Sunday, May 10, 2015. (AP Photo/Matt Dunham) 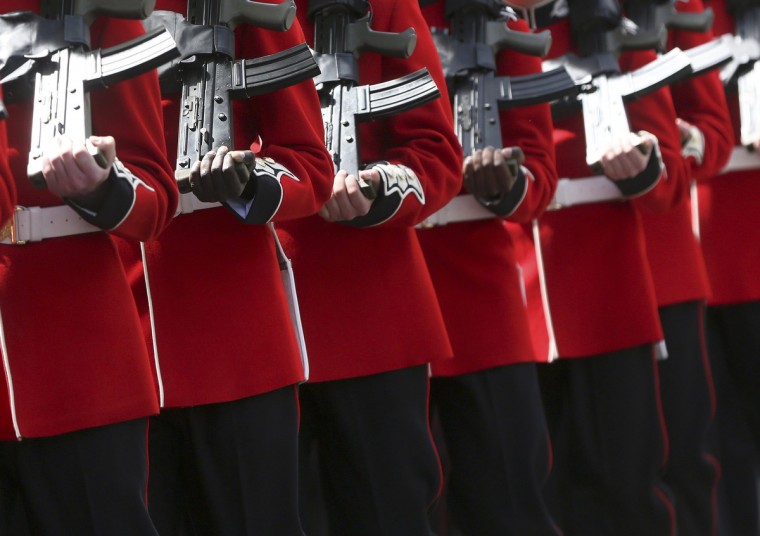 Guardsmen of the Scots Guards march during an armed forces and veterans’ parade to mark the 70th anniversary of VE Day (Victory in Europe Day), the end of the Second World War in Europe, in central London on May 10, 2015. (Neil Hall/Getty Images) 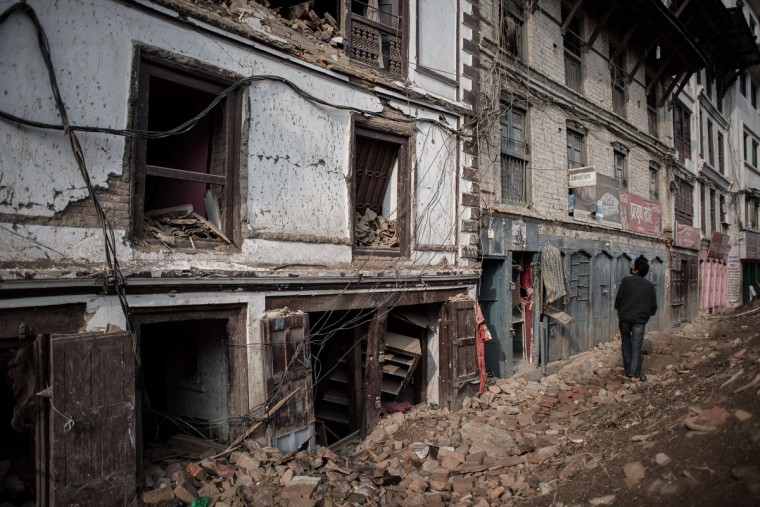 A Nepalese man walks past closed shops in the historical centre of Kathmandu on May 10, 2015. The 7.8 magnitude earthquake which struck the Himalayan nation on April 25, 2015 had a devastating impact on the economy of Nepal where tourism attracted almost 800,000 foreign visitors in 2013 — many of them climbers heading straight to Mount Everest but also less adventurous tourists seeking the rich cultural history of Kathmandu. (Philippe Lopez/Getty Images) 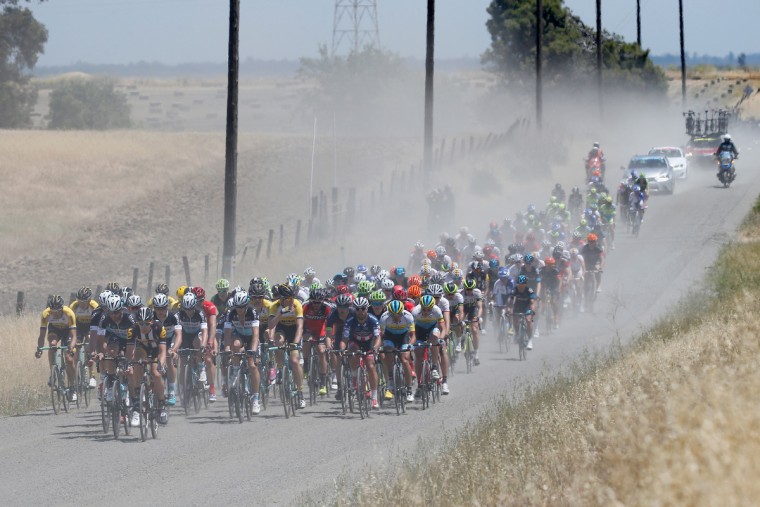 The peloton races down a section of dirt and gravel road during stage one of the 2015 AMGEN Tour of California on May 10, 2015 in Rio Vista, California. (Doug Pensinger/Getty Images) 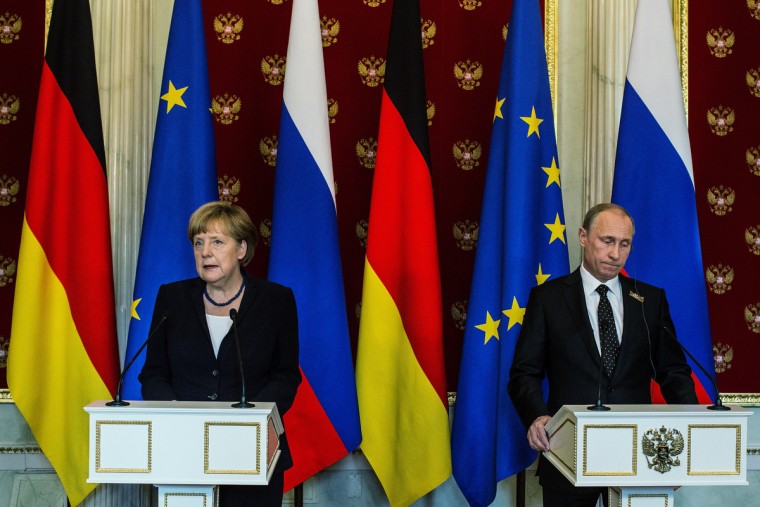 German Chancellor Angela Merkel (L) and Russian President attend a press conference at the Kremlin May 10, 2015 in Moscow, Russia. Merkel is on a one-day visit to Russia. (Alexander Aksakov/Getty Images)