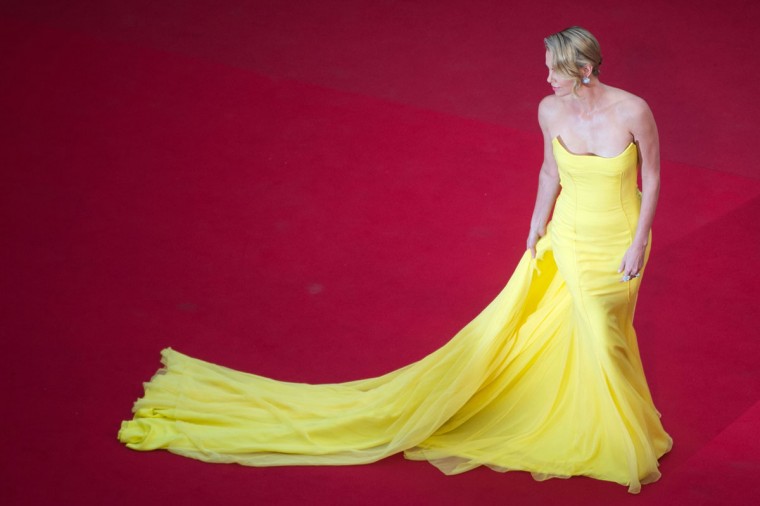 Charlize Theron poses as she arrives for the screening of the film “Mad Max : Fury Road” during the 68th Cannes Film Festival in Cannes, southeastern France, on May 14, 2015. (BERTRAND LANGLOIS/AFP/Getty Images) 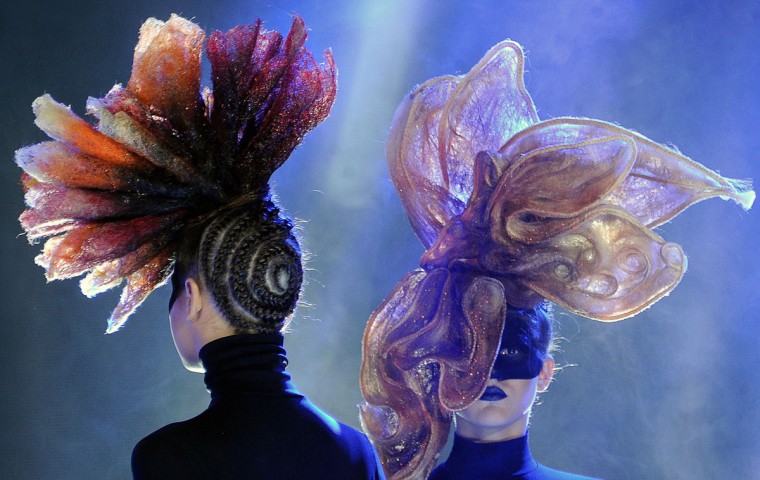 Models present creations by Belarusian studio Iteyra during the international festival A Mill of Fashion in Minsk, on May 14, 2015. (SERGEI GAPON/AFP/Getty Images) 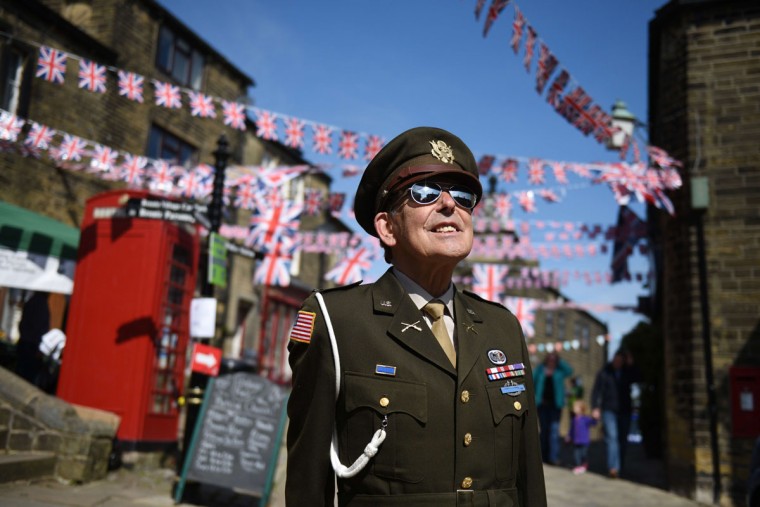 A man dressed up in the costume of a member of the US military from World War II smiles during the Haworth 1940s Weekend in the village of Haworth, Northern England on May 15, 2015. Each year the village celebrates the 1940s with a program of events and a re-enactment of the period in the village. (OLI SCARFF/AFP/Getty Images) 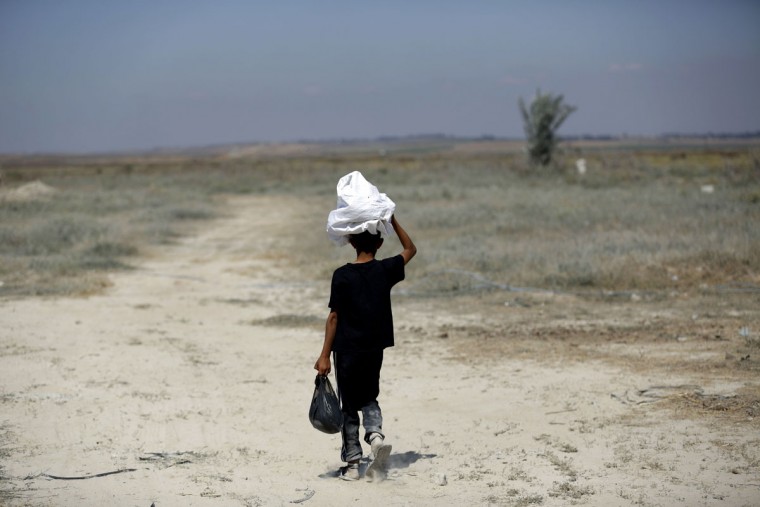 A Palestinian boy walks in the Gaza Strip near the Nahal Oz border crossing with Israel as Palestinians mark the 67th anniversary of the “Nakba” on May 15, 2015. “Nakba” means in Arabic “catastrophe” in reference to the birth of the state of Israel 67-years-ago in British-mandate Palestine, which led to the displacement of hundreds of thousands of Palestinians who either fled or were driven out of their homes during the 1948 war over Israel’s creation. (MOHAMMED ABED/AFP/Getty Images) 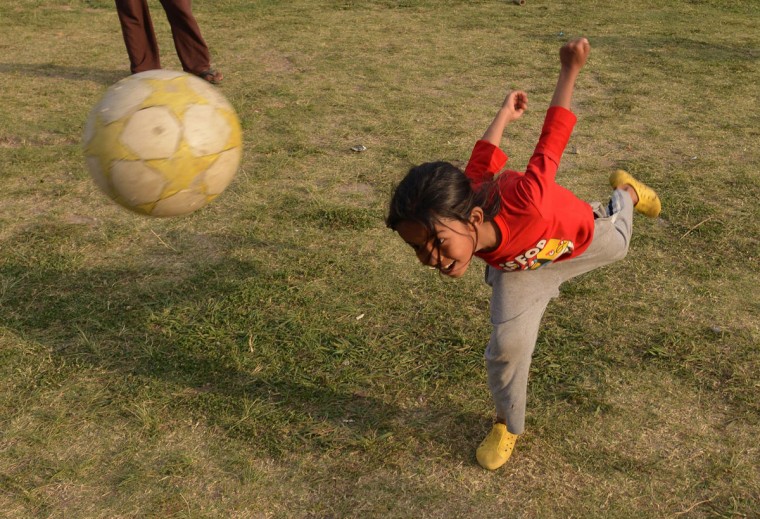 A Nepalese child plays with a football at a tent camp in Kathmandu on May 15, 2015. Nearly 8,500 people have now been confirmed dead in the disaster, which destroyed more than half a million homes and left huge numbers of people without shelter with just weeks to go until the monsoon rains. (PRAKASH MATHEMA/AFP/Getty Images) 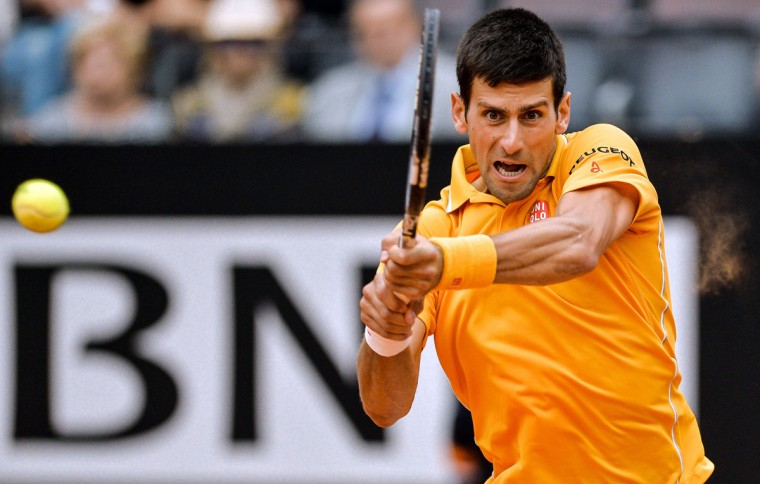 Novak Djokovic of Serbia returns the ball to Kei Nishikori of Japan during their ATP Tennis Open match in Rome on May 15, 2015. (ANDREAS SOLARO/AFP/Getty Images) 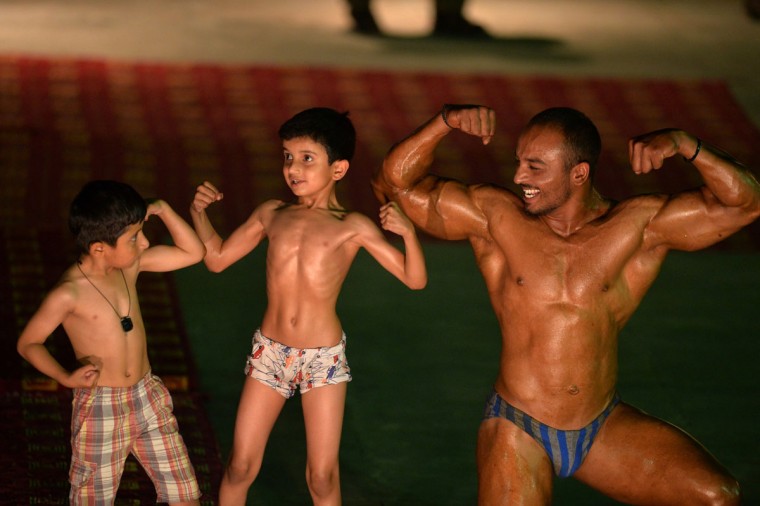 A Pakistani bodybuilder competes during a local Mr. Islamabad and junior Mr Islamabad competition in Islamabad on May 15, 2015. (AAMIR QURESHI/AFP/Getty Images) 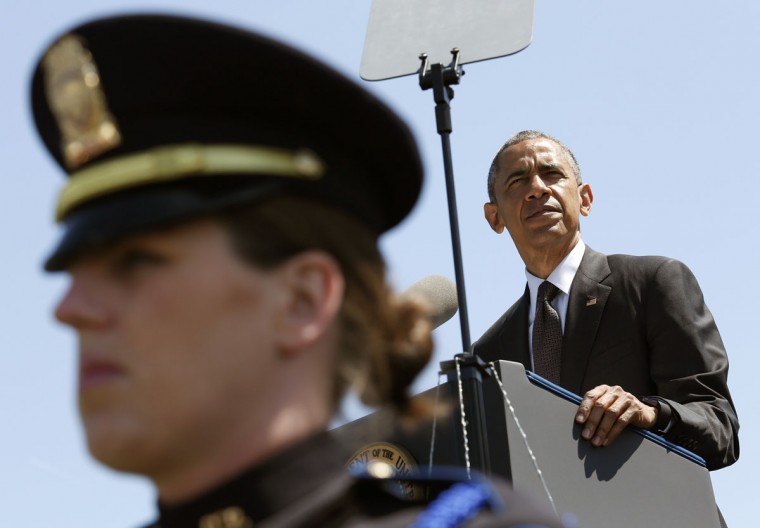 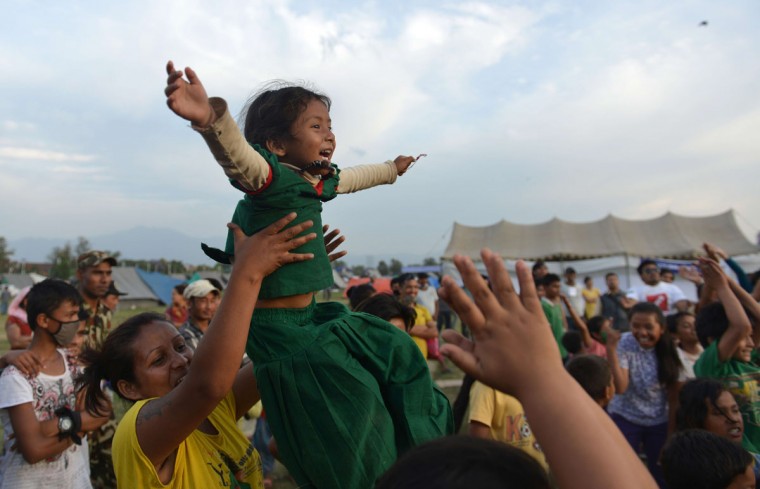 A Nepalese mother and child participate in a “laughter yoga” session to help relieve trauma among survivors of two earthquakes which struck the country in less than three weeks, in Kathmandu on May 15, 2015. Nearly 8,500 people have now been confirmed dead in the disaster, which destroyed more than half a million homes and left huge numbers of people without shelter with just weeks to go until the monsoon rains. (PRAKASH MATHEMA/AFP/Getty Images) 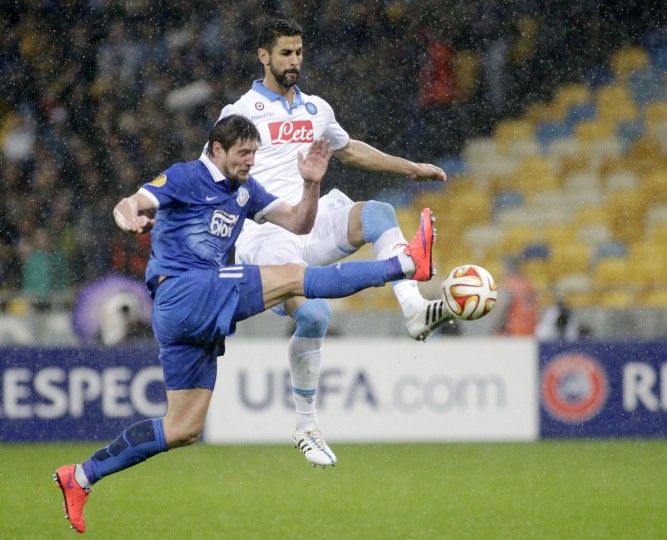 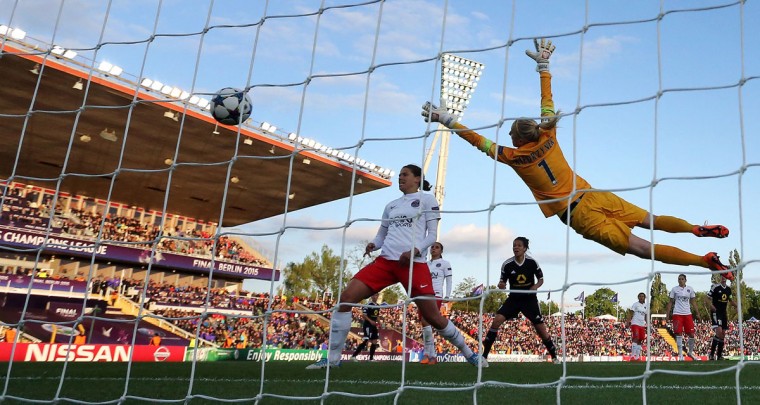 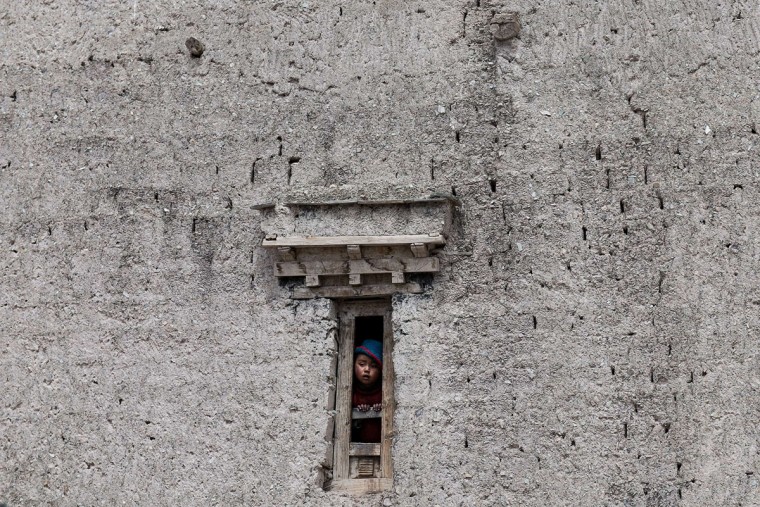 This photograph taken on May 9, 2015, shows a young Indian boy looking out of a window in Yurutse, in the Markha Valley in Ladakh. (Alex Ogle/AFP/Getty Images) 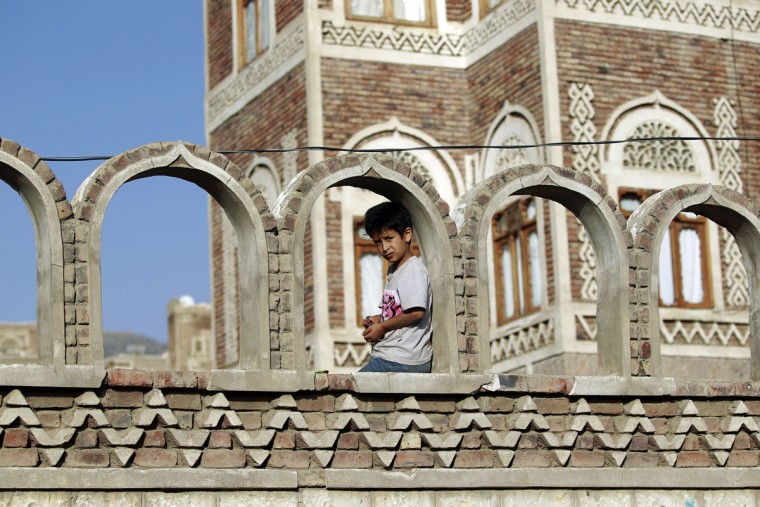 A Yemeni child looks on in Sanaa’s old city on May 14, 2015. The United Nations calls on all parties to the Yemen conflict to respect a humanitarian ceasefire in a bid to boost sorely-needed aid shipments. (MOHAMMED HUWAIS/AFP/Getty Images) 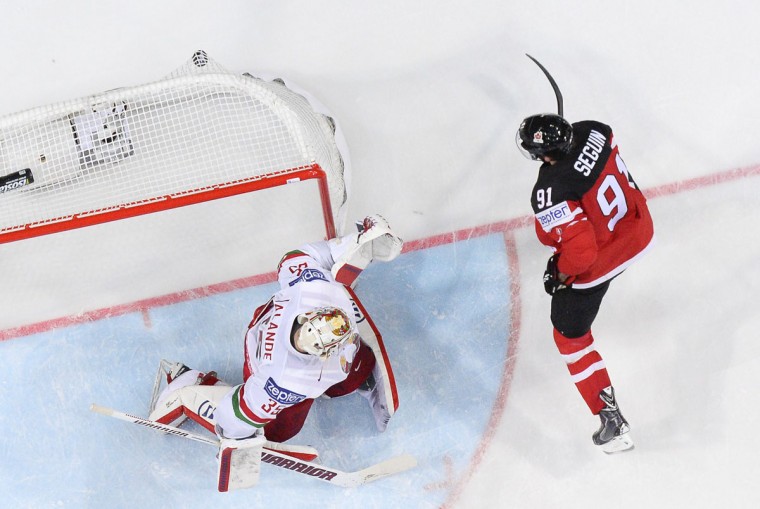 Forward Tyler Seguin of Canada shoots to score past goalkeeper Kevin Lalande of Belarus during the quarter final match Canada vs Belarus at the 2015 IIHF Ice Hockey World Championships on May 14, 2015 at the O2 Arena in Prague. (JONATHAN NACKSTRAND/AFP/Getty Images) 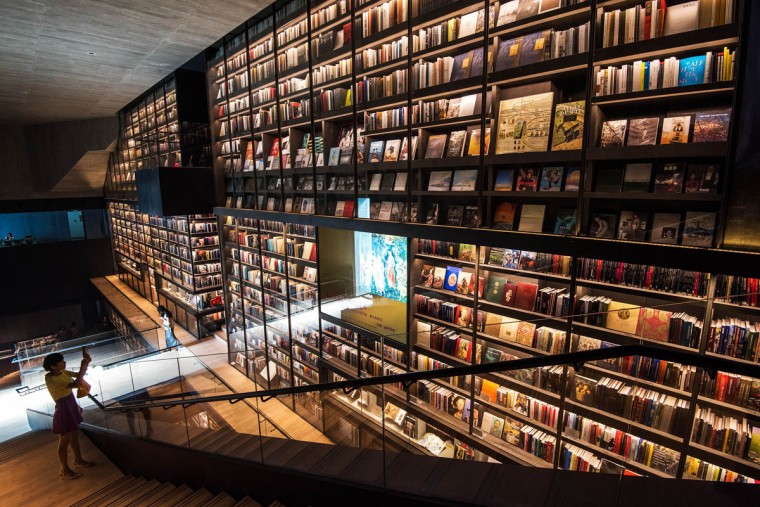