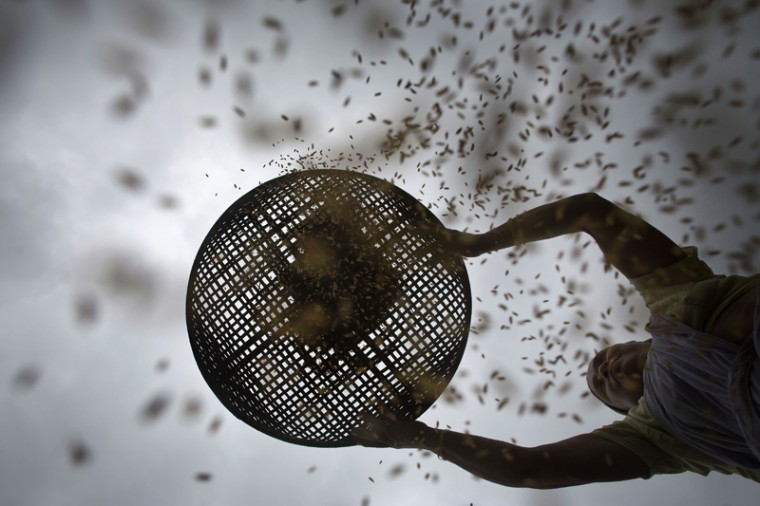 An Indian woman dries paddy after harvesting in Burha Mayong village, about 30 miles east of Gauhati, India, on Monday. Farmers in India’s northeastern state Assam are busy harvesting their crop ahead of the anticipated monsoon rains. (Anupam Nath/AP) 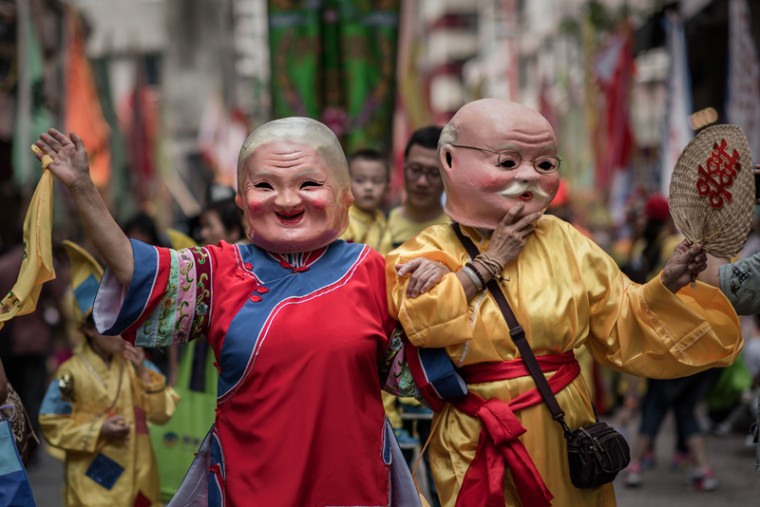 Performers wearing traditional costumes and masks march during a parade celebrating the birthday of the sea deity Tam Kung in Hong Kong, on Monday. According to the legend, Tam Kung, also known as Lord Tam the sea god, had the powers to contain winds and storms, making him a popular among fishermen to become a patron deity of the seafarers. (PHILIPPE LOPEZ/AFP/Getty Images) 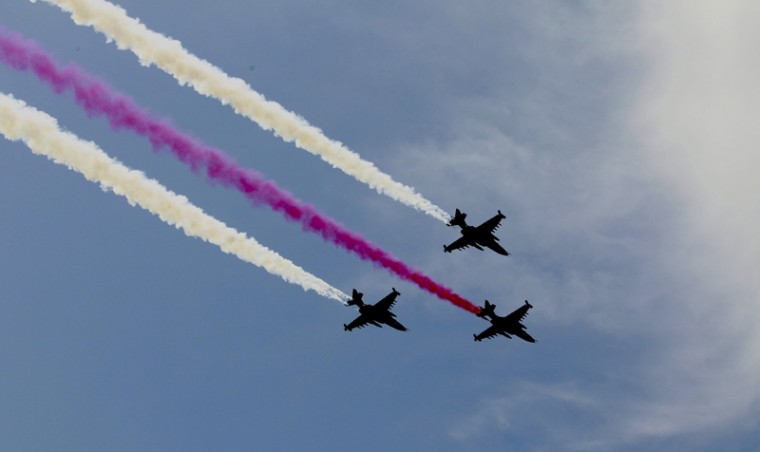 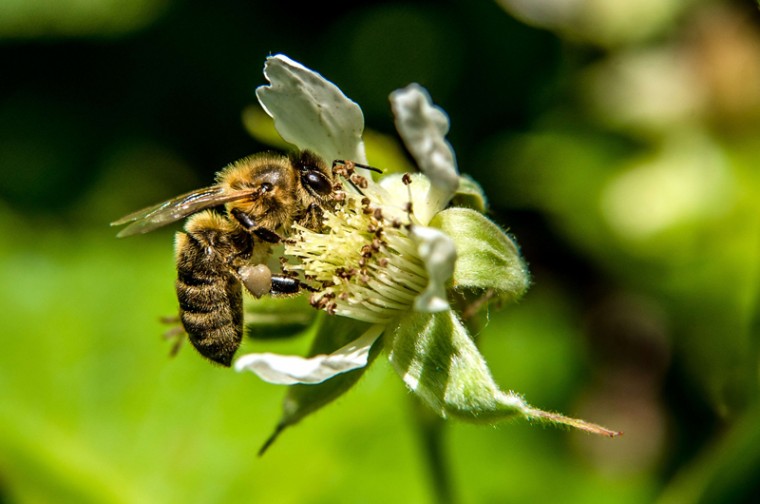 A bee lands on a flower on Sunday in Godewaerselde, northern france. (PHILIPPE HUGUEN/AFP/Getty Images) 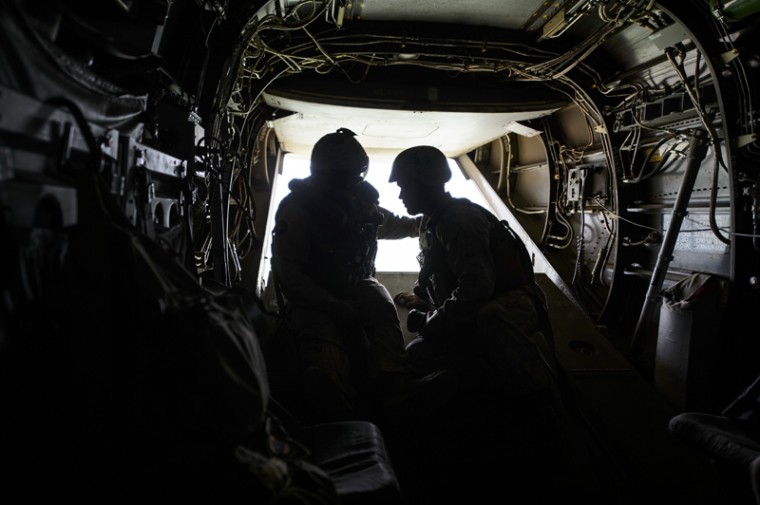 United States military forces talk during a flight during a joint military exercise with NATO Allies from Romania and Bulgaria, in Babadag Training Area, in Babadag, south-eastern Romania, on Tuesday. (Andreea Alexandru/Mediafax via AP) 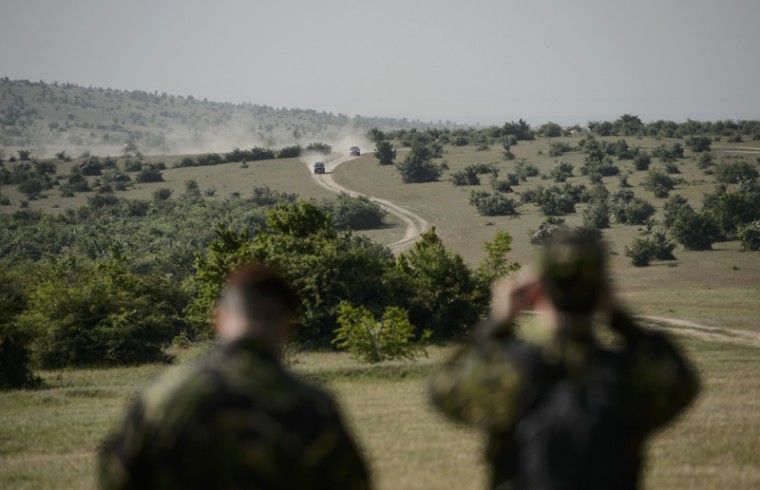 Two armored vehicles speed through a dusty road as two Romanian servicemen watch during a joint military exercise with NATO Allies from Romania and Bulgaria, in Babadag Training Area, in Babadag, south-eastern Romania, on Tuesday. (Andreea Alexandru/Mediafax via AP) 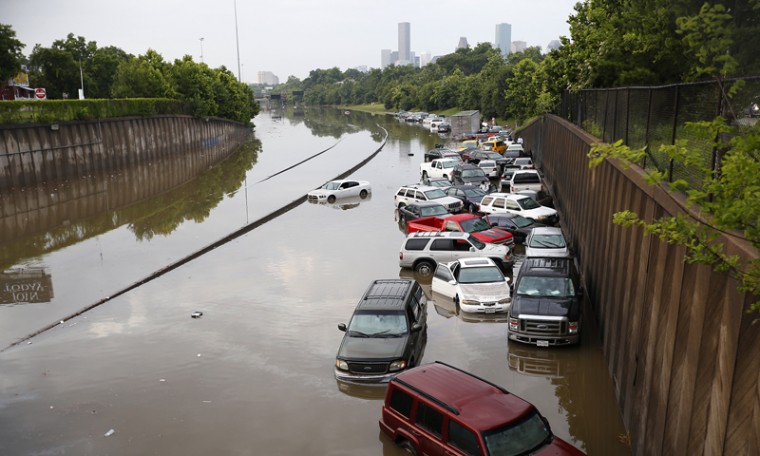 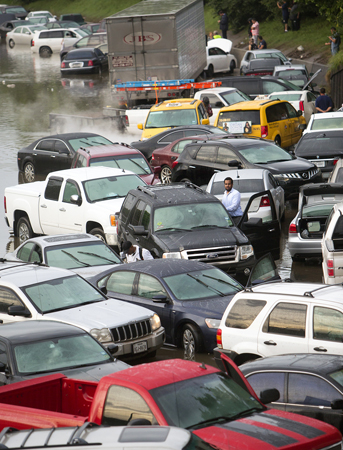 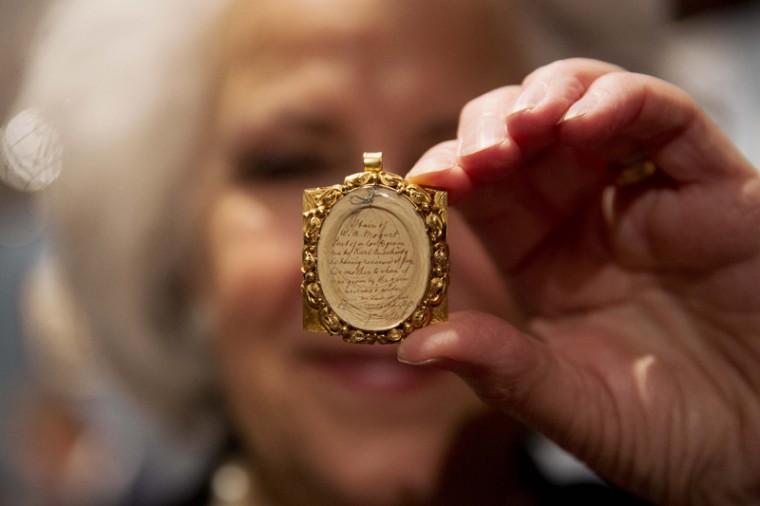 Gallery assistant Sandra Handley poses for photographs with a lock of Wolfgang Amadeus Mozart’s hair, contained in a 19th-century gilt locket at the Sotheby’s auction house in London, on Tuesday. The lock of hair is estimated to fetch $15,383 to $18,459 as part of the Music, Continental and Russian Books and Manuscripts auction on Thursday in London. (Matt Dunham/AP) 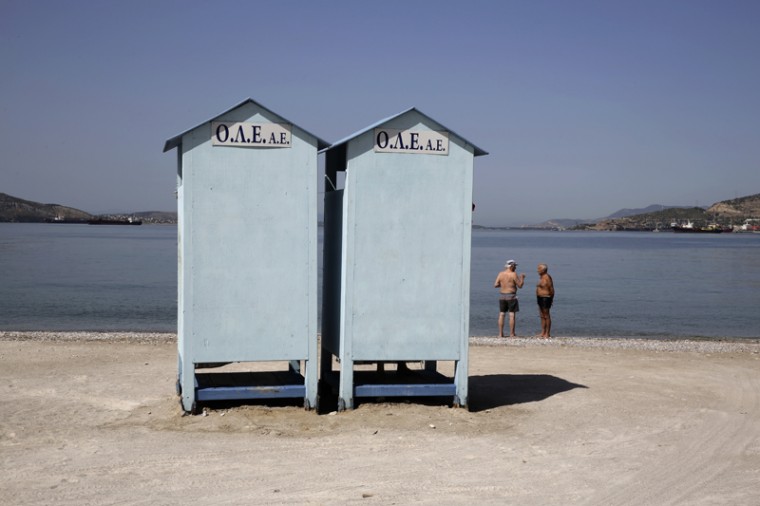 Bathers chat near the sea in the industrial area of Elefsina west of Athens on Tuesday. Greece’s finance minister insisted Tuesday that the cash-strapped country will soon reach an agreement with bailout creditors, that will enable it to make a debt payment to the International Monetary Fund on June 5, which it would be otherwise unable to pay. (Petros Giannakouris/AP) 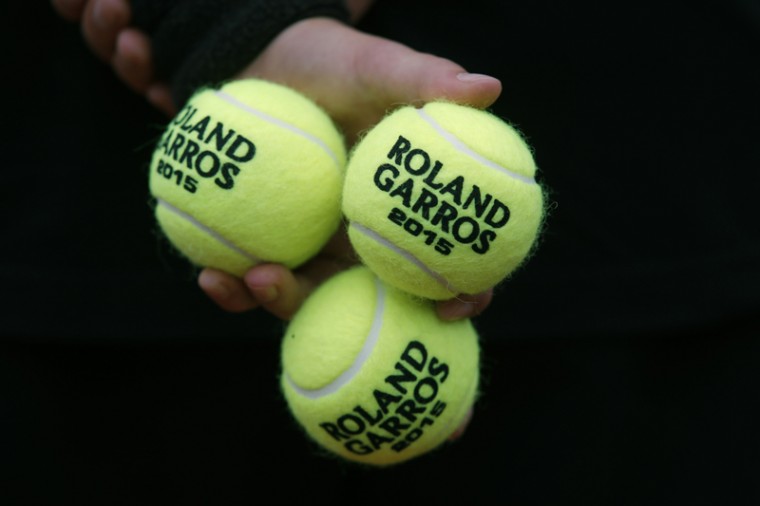 A ball boy holds tennis balls during the first round matches of the French Open tennis tournament at the Roland Garros stadium, in Paris on Tuesday. (Michel Euler/AP) 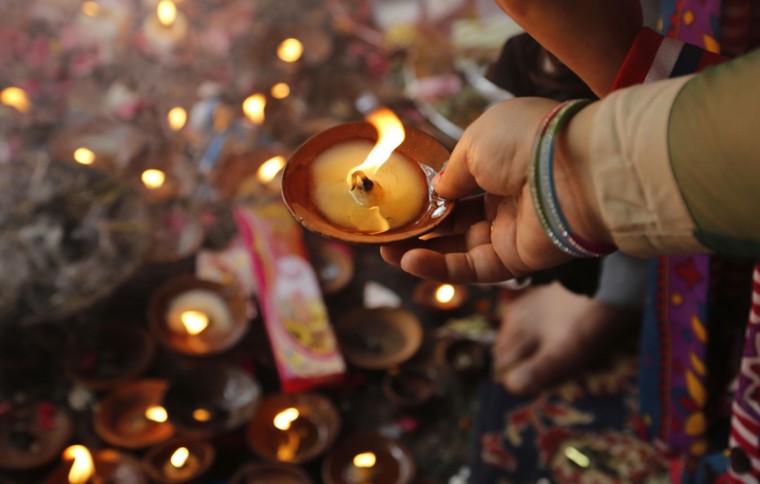 A devotee performs rituals with a lamp at the historic Kheer Bhawani temple in Tul Mul, some 18 miles northeast of Srinagar, India, on Tuesday. Hundreds of Hindu devotees attended the prayers in the historic Kheer Bhavani Temple during an annual festival dedicated to Hindu Goddess Durga. (Mukhtar Khan/AP) 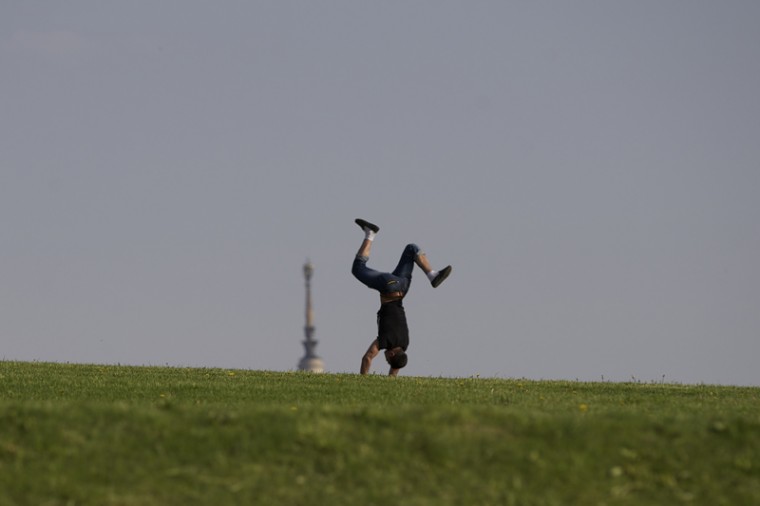 A man walks on his hands in a park in Moscow, Russia, on Tuesday. The hottest day of the year so far in the Russian capital was registered on Tuesday in Moscow, with temperature rising up to 81 degrees. (Ivan Sekretarev/AP) 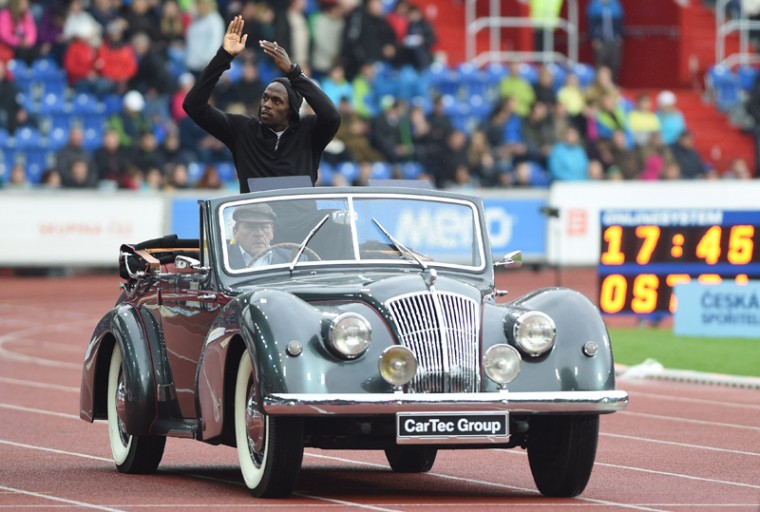 Jamaican sprinter Usain Bolt in a historical car greets spectators during the opening ceremony of the Golden Spike athletic meeting in Ostrava, Czech Republic, on Tuesday. (Jaroslav Ozana/CTK via AP) 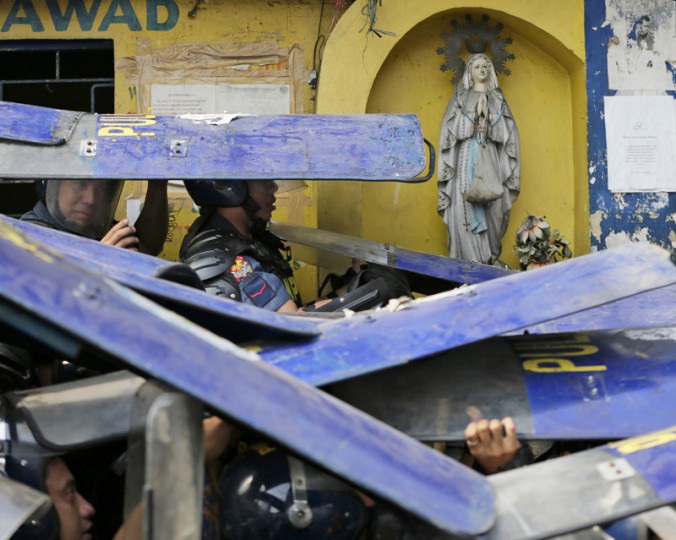 Riot police take cover as residents throw bottles and rocks during the demolition of a squatters’ community at suburban Caloocan city, north of Manila, Philippines, on Tuesday. Population growth, poverty and lack of economic opportunities in rural areas have driven millions of Filipinos to urban areas, many settling in squatters colonies that dot the sprawling metropolitan area in and around Manila. Most of the land they occupy is privately owned, and clearing the dwellings often result in violence. According to residents, the area is home to approximately 500 families, with some having lived there for 50 years. (Bullit Marquez/AP) 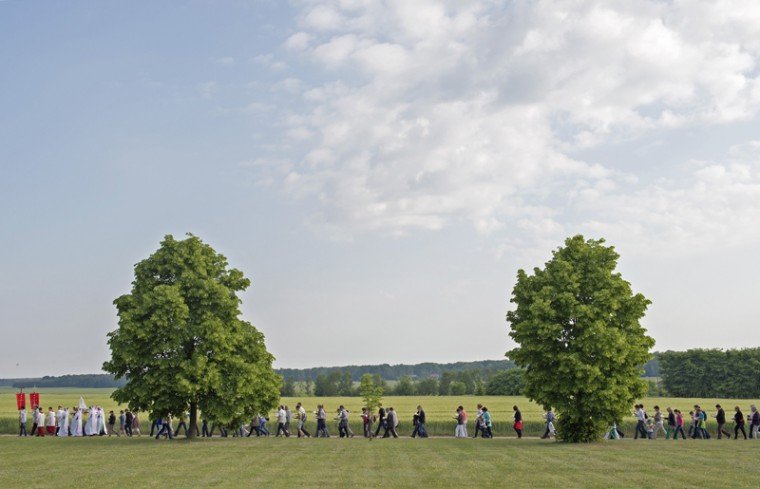 Believers dressed in the traditional clothes of the Sorbs attend a procession in Rosenthal, eastern Germany, on Monday. Catholic faithful Sorbs, a Slavic minority near the German-Polish border, celebrated an open air mass in the small village east of Dresden. (Jens Meyer/AP) 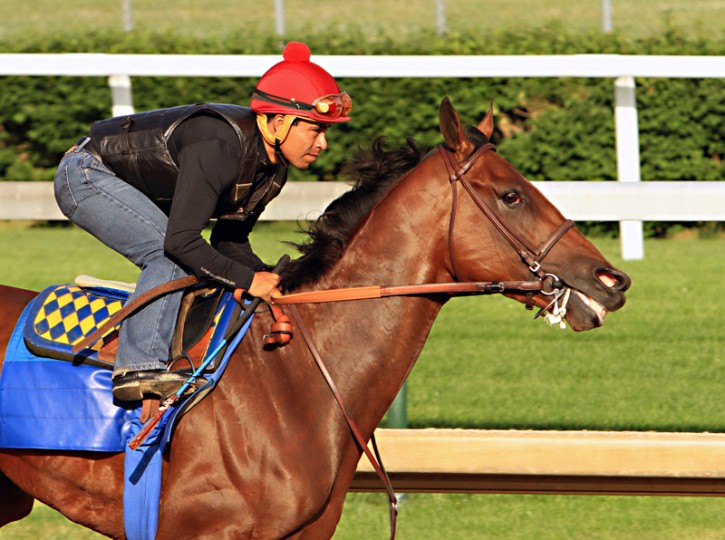 Jockey Martin Garcia rides Kentucky Derby and Preakness Stakes winner American Pharoah during a morning workout at Churchill Downs in Louisville, Ky., on Tuesday. American Pharoah is preparing for a start in the Belmont Stakes in New York on June 6. (Garry Jones/AP)