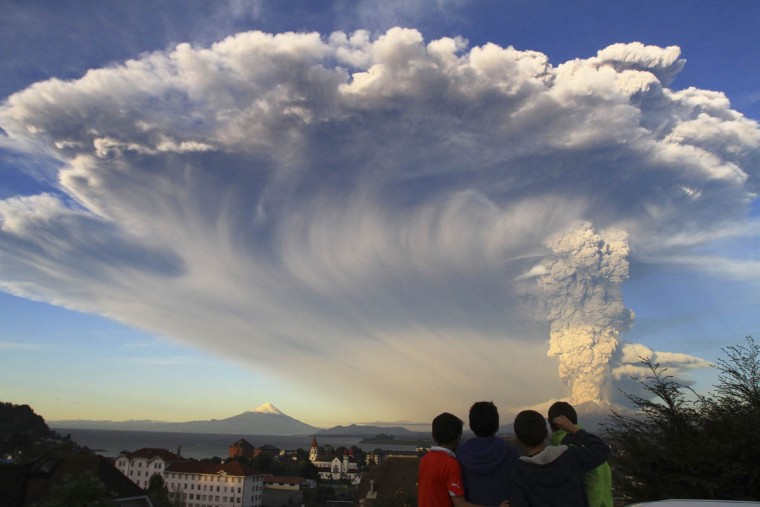 Children watch the Calbuco volcano erupt, from Puerto Varas, Chile. The volcano erupted billowing a huge ash cloud over a sparsely populated, mountainous area in southern Chile. Authorities ordered the evacuation of the inhabitants of the nearby town of Ensenada, along with residents of two smaller communities. (Carlos F. Gutierrez/AP photo) 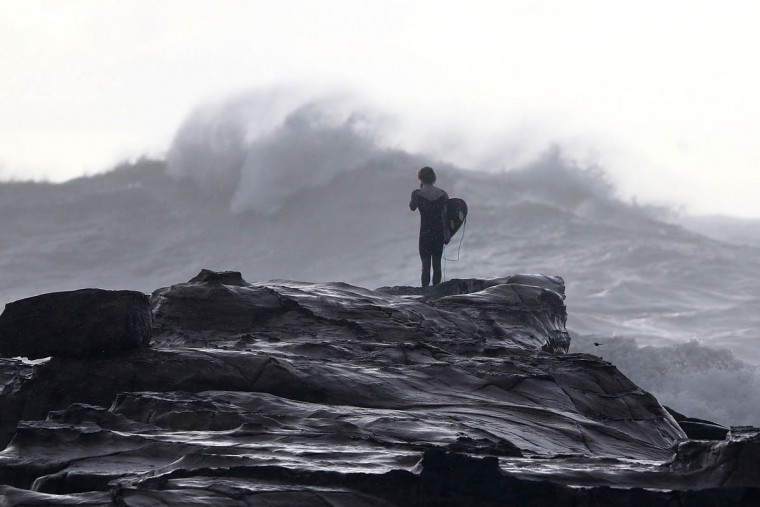 A surfer watches turbulent seas at Avoca Beach on the Cntral Coast in Sydney, Australia. Three people have died and more than 200,000 are still without power as cyclonic winds and rains continue to lash the Sydney, Hunter Valley and Central Coast regions of New South Wales. (Tony Feder/Getty Images) 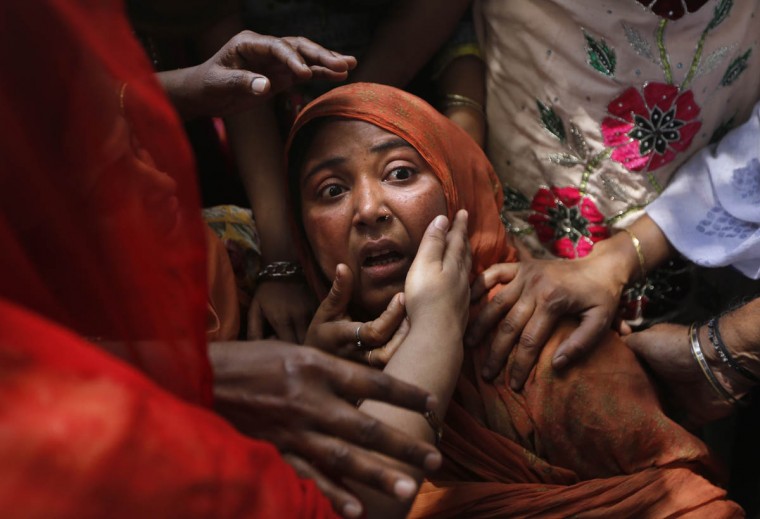 Local people console a shocked mother whose child was found under the debris of a residential building, in New Delhi, India. One man and a child were killed and at least nine others were injured when a three-story residential building collapsed following an explosion in a cooking gas cylinder, according to local news agency Press Trust of India. (Manish Swarup/AP photo) 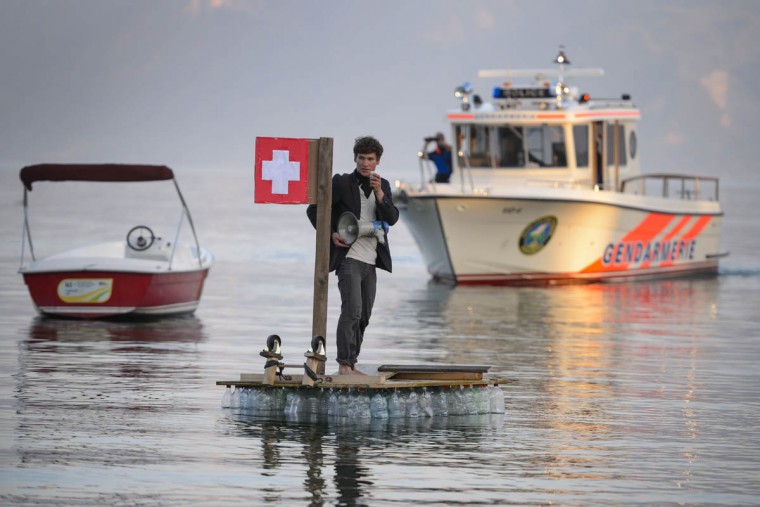 A demonstrator holding a megaphone stands on a raft bearing a Swiss flag as he protests on Lake Geneva in Lausanne, next to the hotel hosting the 2015 edition of an industry-leading Global Commodities Summit. More than 500 people took part in a protest to denounce speculation in commodities. (Fabrice Coffrini/AFP/Getty Images) 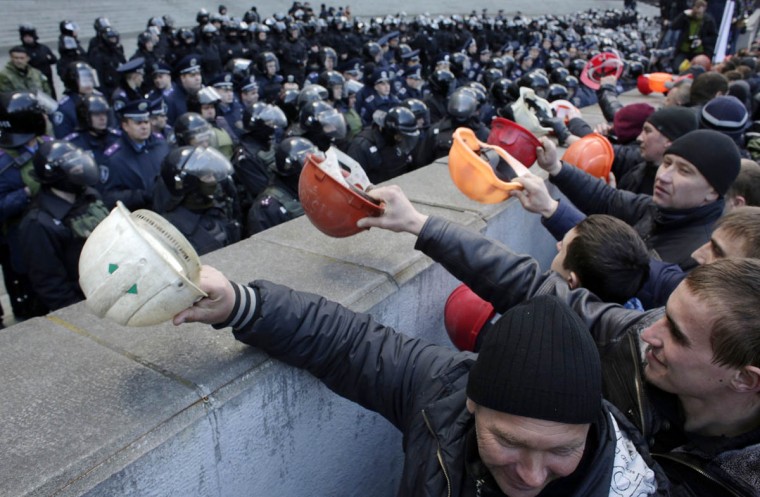 Ukrainian coal miners protest outside the Government building in Kiev demanding the government protect their jobs as the eastern separatist conflict threatens to force pits to close. Banging their helmets, the miners yelled “Shame” on the pro-western government, demanding it raise their pay and restore subsidies to the mines that help power the Ukrainian industry. (Anatolii Stepanov/AFP/Getty Images) 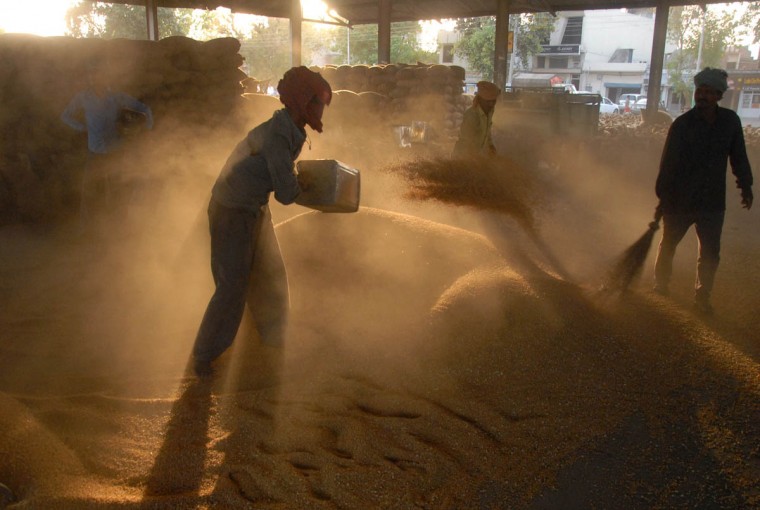 Indian labourers gather wheat grains from a thresher at a market in Jalandhar in northern Punjab state. Scores of debt-laden farmers in India have suffered recent damage to their winter crops from unseasonal rains. (Shammi Mehra/AFP/Getty Images) 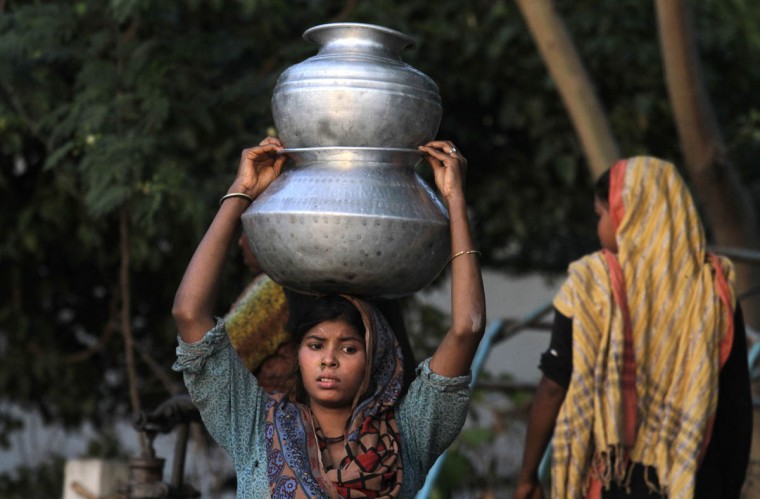 A Pakistani girl carries clean water to her home in Lahore’s slums in Pakistan. There is a scarcity of fresh drinking water in Pakistan among a population of around 180 million. (K.M. Chaudary/AP photo) 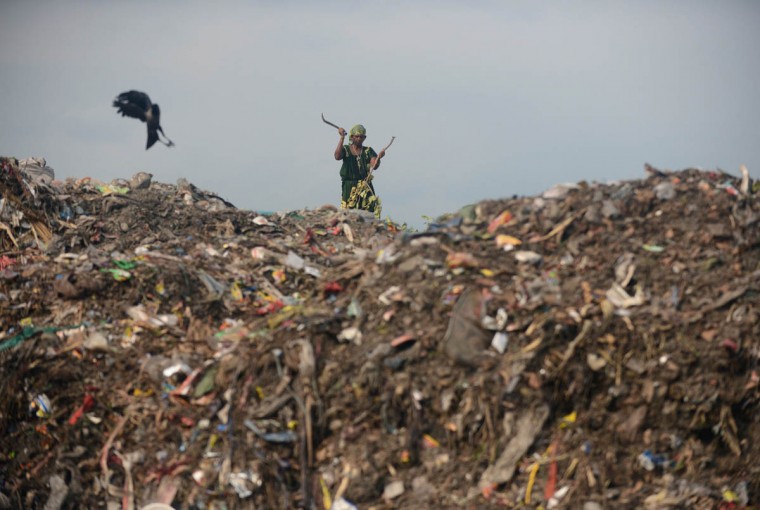 An Indian female ragpicker hacks up wood at a garbage dump yard on the outskirts of Siliguri on Earth Day. Earth Day is observed each April 22, during which events are held worldwide to demonstrate support for environmental protection.(Diptendu Dutta/AFP/Getty Images) 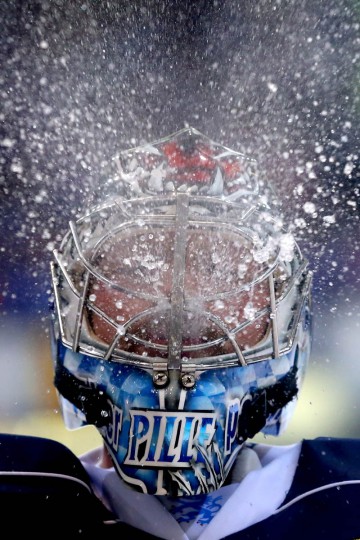 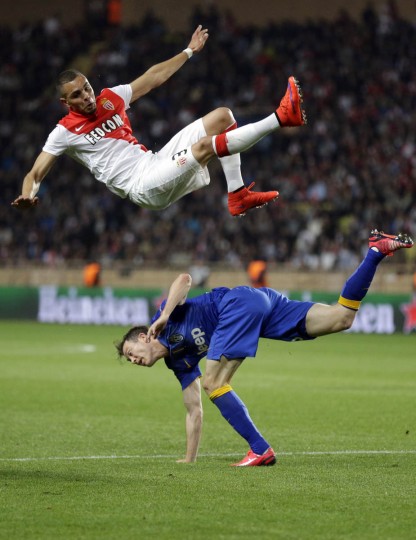 Monaco’s Layvin Kurzawa is in the air above /Juventus’ Stephan Lichtsteiner during the Champions League quarterfinal second leg soccer match between Monaco and Juventus at Louis II stadium in Monaco. (Michel Euler/AP photo) 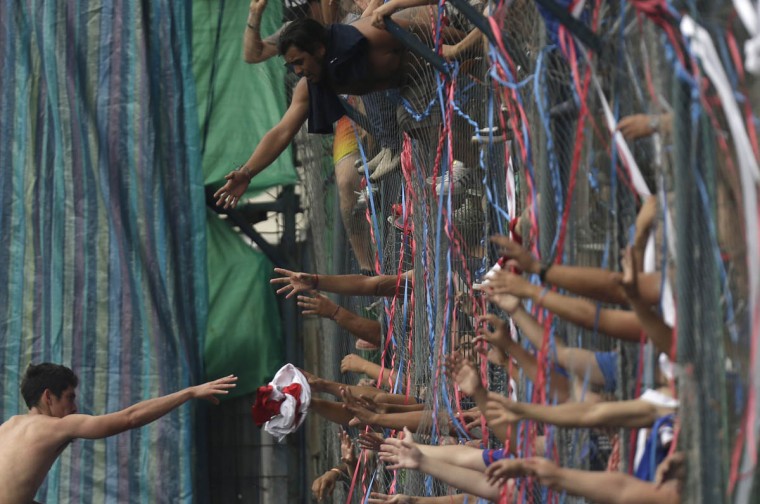 A woman leans to peek into a chasm as Armenian people gather during a commemoration ceremony at a site called “Dudan” near Diyarbakir, and believed to be a mass grave of the Armenian Genocide. Armenians prepare to commemorate a hundred years since a genocide wiped out up to 1.5 million of their kin as a fierce dispute still rages with Turkey over one of the greatest crimes of the 20th century. (Ilyas Akengin/AFP/Getty Images) 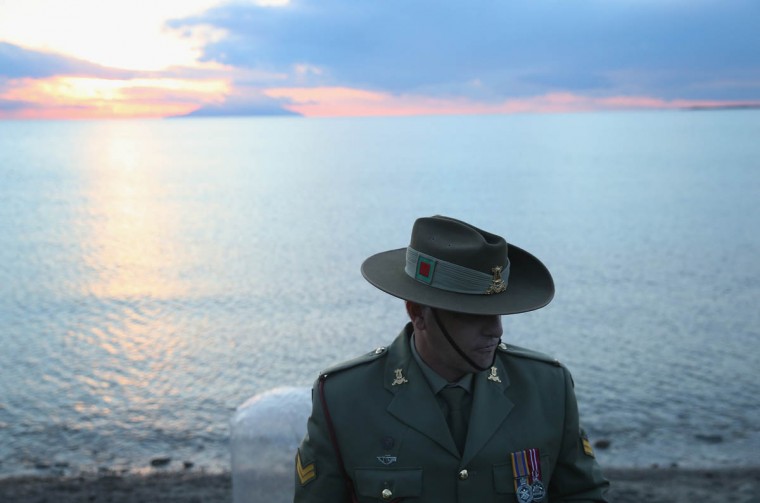 Corporal Andrew Barnett of the Australian Army Band, who will play the bugle at the upcoming Dawn Service commemoration ceremony to honour Australian and New Zealand soldiers killed in the Gallipoli Campaign, stands at Anzac Cove near Eceabat, Turkey. Allied and Turkish representatives, as well as family members of those who served, will commemorate the 100th anniversary of the campaign with ceremonies scheduled for April 24-25. The Gallipoli land campaign, in which a combined Allied force of British, French, Australian, New Zealand and Indian troops sought to occupy the Gallipoli peninsula and the strategic Dardanelles strait during World War I, began on April 25, 1915 against Turkish forces of the Ottoman Empire. The Allies, unable to advance more than a few kilometers, withdrew after eight months. The campaign cost the Allies approximately 45,000 killed and up to 200,000 wounded, the Ottomans approximately 85,000 killed and 160,000 wounded. (Sean Gallup/Getty Images) 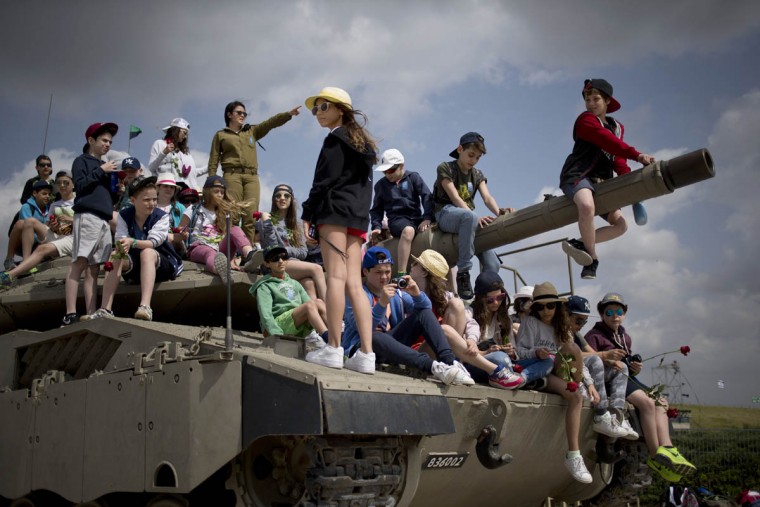 School children from Belgium sit on a tank on display as they listen to an Israeli soldier speaks about Israel’s wars, near the wall of names of fallen soldiers, at the Armored Corps memorial, before a ceremony marking the annual Memorial Day for soldiers and civilians killed in more than a century of conflict between Jews and Arabs, in Latrun near Jerusalem, Israel. Israel came to a standstill on Wednesday as sirens wailed across the country on its annual Memorial Day for fallen soldiers and victims of terrorism. (Ariel Schalit/AP photo) 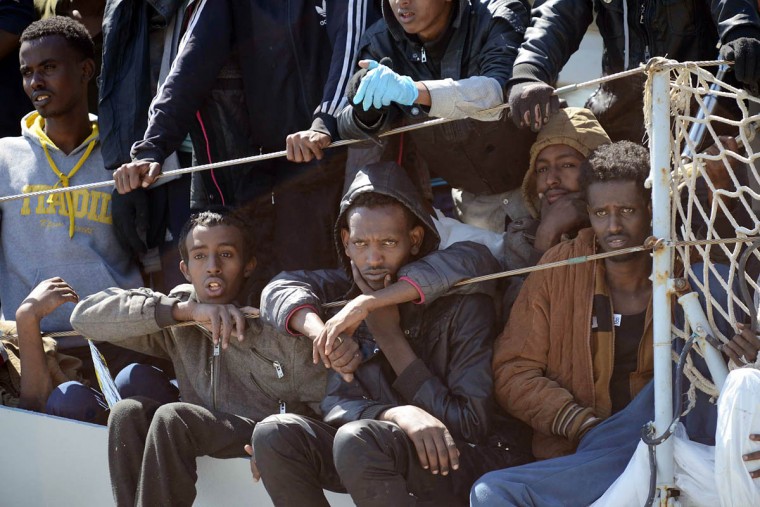 Migrants wait to disembark from the Italian Navy vessel ‘Chimera’ in the harbor of Salerno, Italy. Italy pressed the European Union on Wednesday to devise concrete, robust steps to stop the deadly tide of migrants on smugglers’ boats in the Mediterranean, including setting up refugee camps in countries bordering Libya. Italian Defense Minister Roberta Pinotti also said human traffickers must be targeted with military intervention. (Francesco Pecoraro/AP photo) 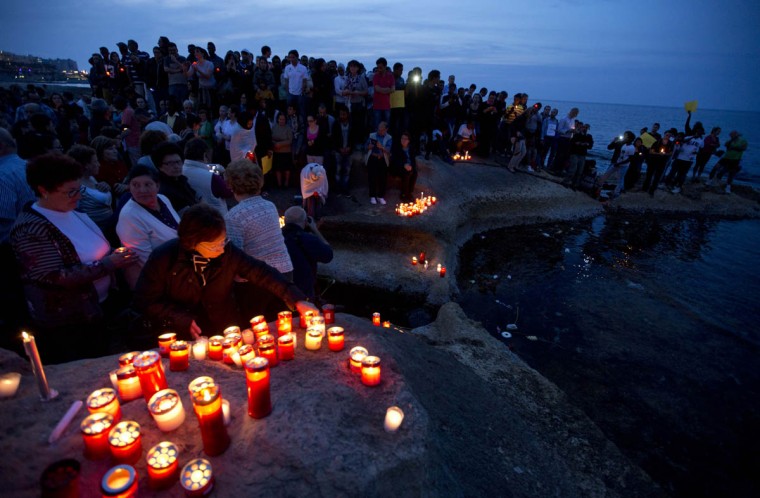 People lay candles as they pause by the sea during a candle light vigil in Sliema, in the outskirts of Valletta, Malta. A smuggler’s boat crammed with hundreds of people overturned off the coast of Libya on Saturday as rescuers approached, causing what could be the Mediterranean’s deadliest known migrant tragedy. The burial ceremony of the 24 rescued bodies will take place in Malta Thursday. (Alessandra Tarantino/AP photo) 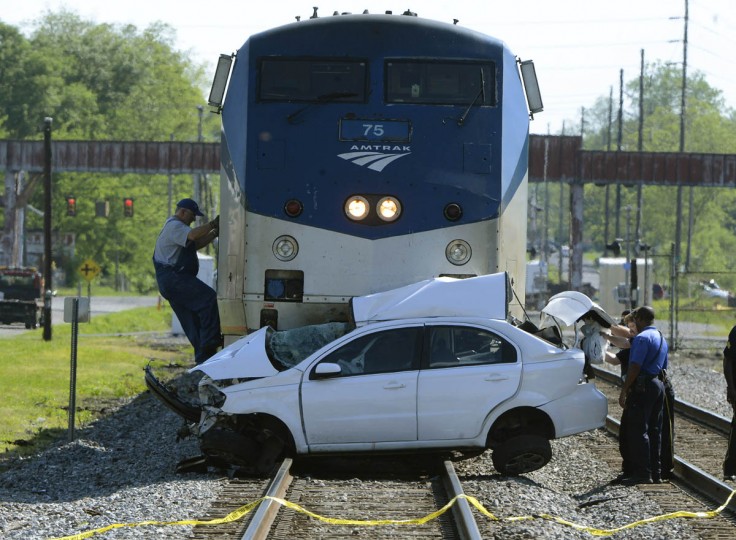 A conductor climbs to the cab of a locomotive after a collision between an Amtrak train and a car in Bessemer, Ala. The driver of the car drove around the crossing guards, according to Deputy Chief Mike Roper of the Bessemer Police Department. (Mark Almond/AL.com via AP) 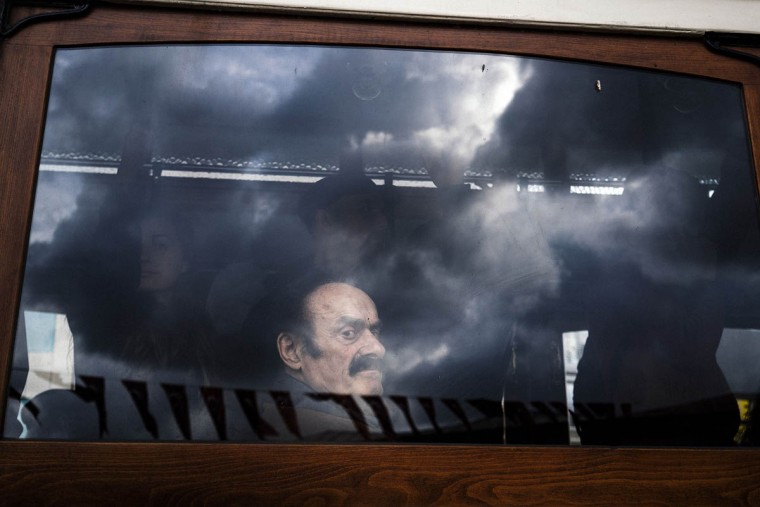 A man looks out of the window of a tram at Taksim Square in Istanbul. Turkey’s central bank decided to leave interest rates unchanged but implement two secondary policy measures aimed at supporting the embattled Turkish lira. (Dimitar Dilkoff/AFP/Getty Images)

« A look back at The Penn Relays and its hometown » Whirling dervish, British royal fandom, Israel’s Independence Day | April 23