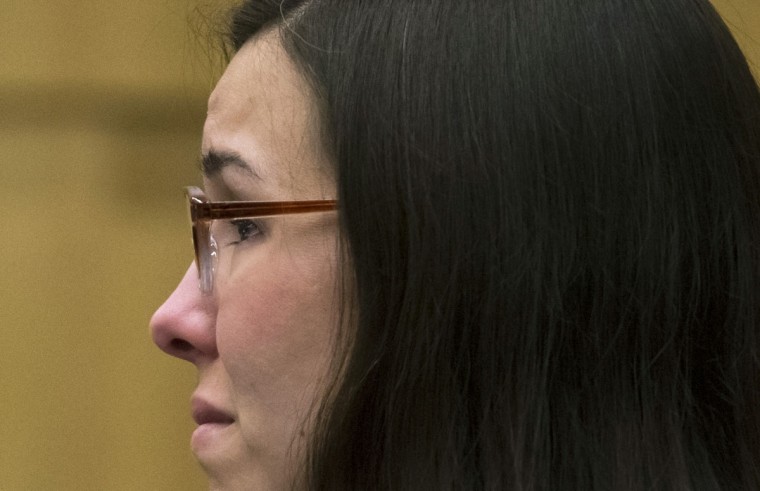 Jodi Arias looks on during her sentencing in Maricopa County Superior Court, Monday, April 13, 2015, in Phoenix. A judge sentenced Arias, a convicted murderer, to life in prison without the possibility of release, ending a nearly seven-year-old case that attracted worldwide attention with its salacious details. (Mark Henle/The Arizona Republic via AP) 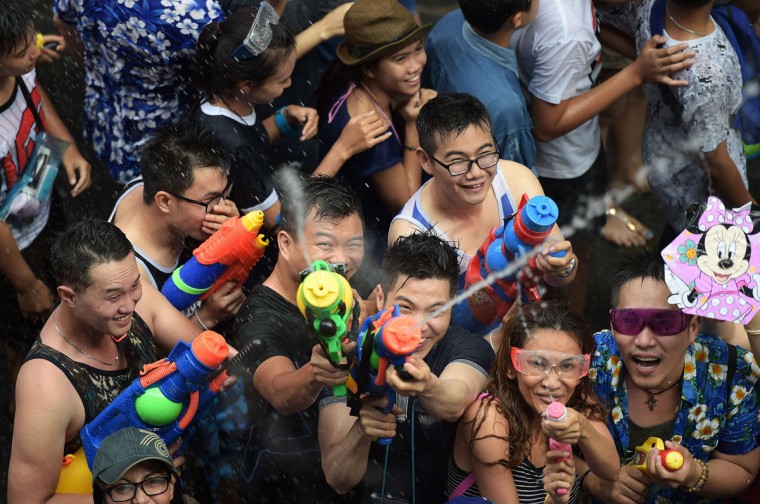 Revelers take part in water fights as they celebrate the Thai traditional New Year in a water festival known as Songkran, at Silom road in Bangkok on April 13, 2015. (AFP Photo/Christophe Archambault) 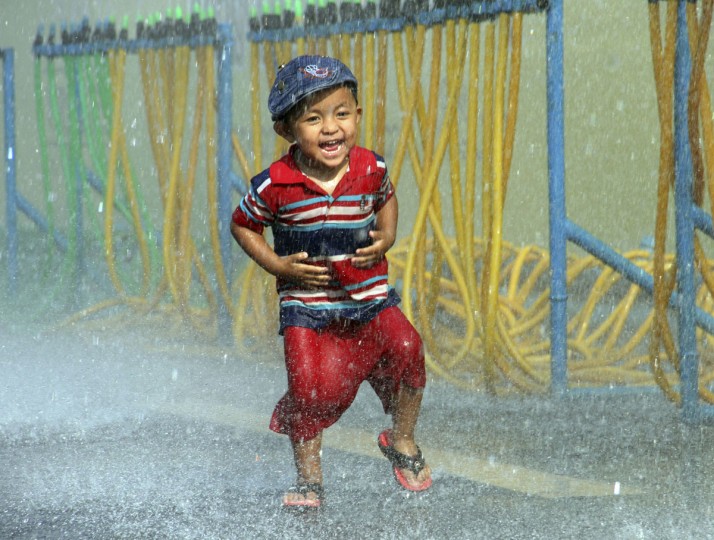 A boy runs as he is splashed with water during the opening ceremony of the annual Thingyan water festival celebrations outside Yangon City Hall in Yangon, Myanmar Monday, April 13, 2015. Myanmar began celebrating its annual days-long water festival, known as Thingyan, on Monday, marking the new year according to the traditional Burmese lunisolar calendar. (AP Photo/Khin Maung Win) 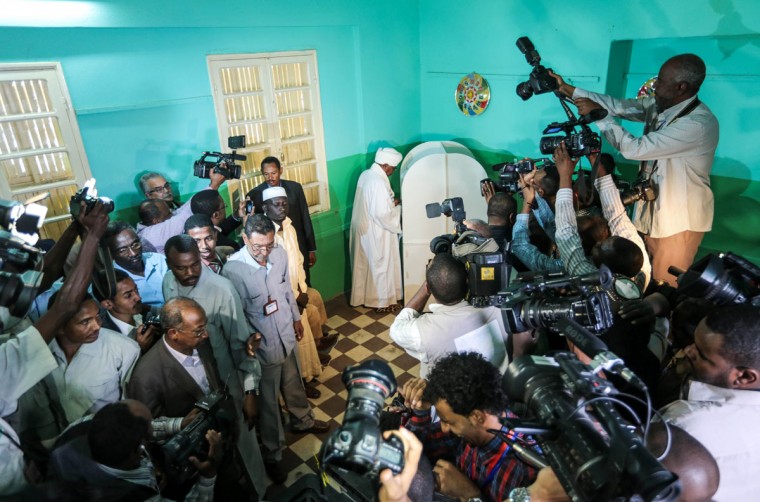 Journalists gather around President Omar al-Bashir as he votes on the first day of presidential and legislative elections, in Khartoum, Sudan, Monday, April 13, 2015. Sudan began voting Monday in an election expected to be won by al-Bashir, who has ruled Sudan unchallenged for 25 years. (AP Photo/Mosa’ab Elshamy) 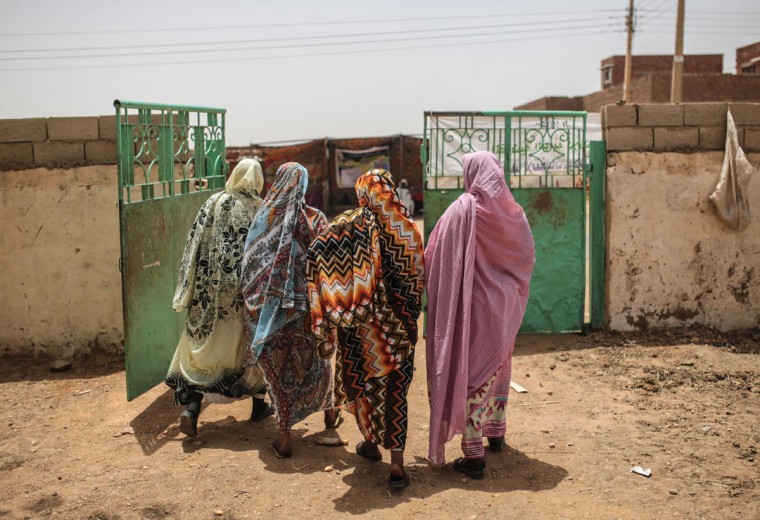 Sudanese women leave after voting at a polling station, on the first day of Sudan’s presidential and legislative elections, in Izba, an impoverished neighborhood on the outskirts of Khartoum, Sudan, Monday, April 13, 2015. (AP Photo/Mosa’ab Elshamy) 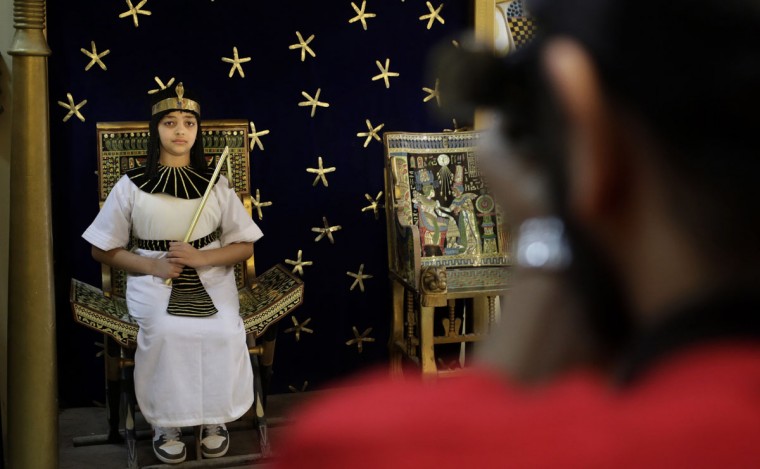 Nour Mahmoud, 12, wearing a Pharaonic costume poses for a photograph at the studio of the Pharaonic Village, during Sham el-Nessim, or ‘smelling the breeze,’ in Giza, Egypt, Monday, April 13, 2015. The holiday signifies the arrival of Spring, a uniquely Egyptian tradition practiced since the days of the Pharaohs. (AP Photo/Amr Nabil) 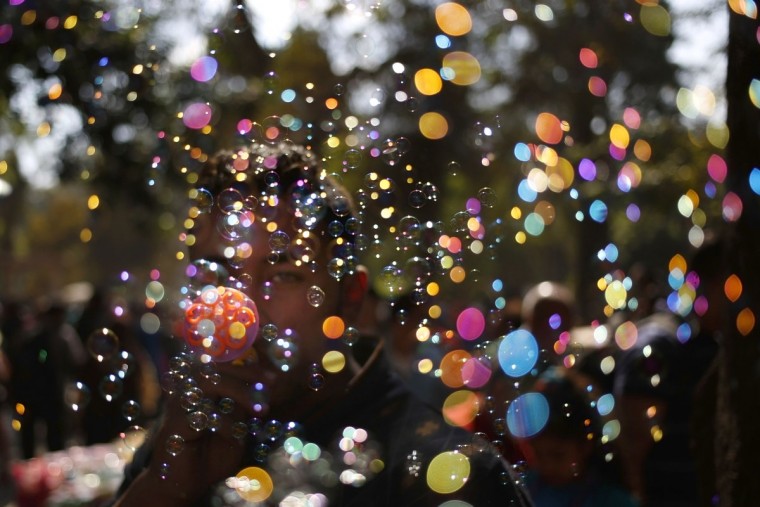 An Egyptian vendor blows bubbles at the Giza Zoo, as the country marks Sham el-Nessim, or ìsmelling the breeze,î in Giza, Egypt, Monday, April 13, 2015. The holiday signifies the arrival of Spring, a uniquely Egyptian tradition practiced since the days of the Pharaohs. (AP Photo/Hassan Ammar) 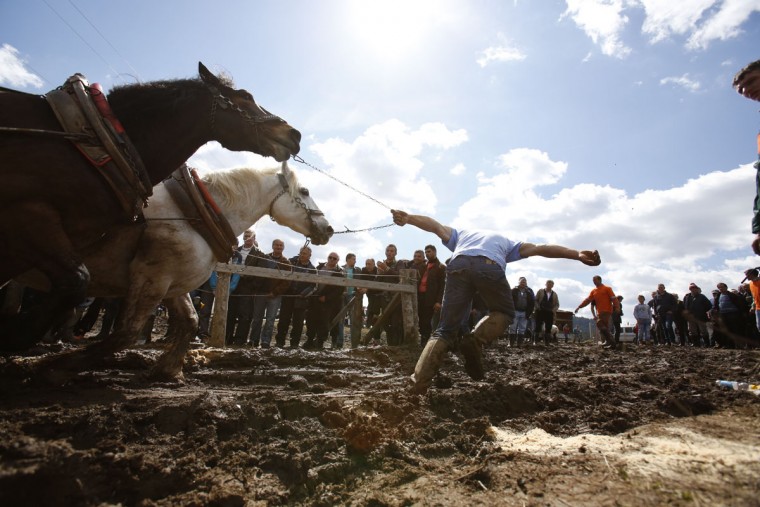 A Bosnian man urges his horses to pull logs up a hill during a competition in the Bosnian town of Sokolac 50 kms west of Sarajevo, Bosnia,on Monday, April, 13, 2015. The annual festival celebrates the centuries old tradition of pulling logs honoring the owners of the strongest horses. Owners of the horses gather from all over Bosnia and beyond, and compete in a show of horse strength. (AP Photo/Amel Emric) 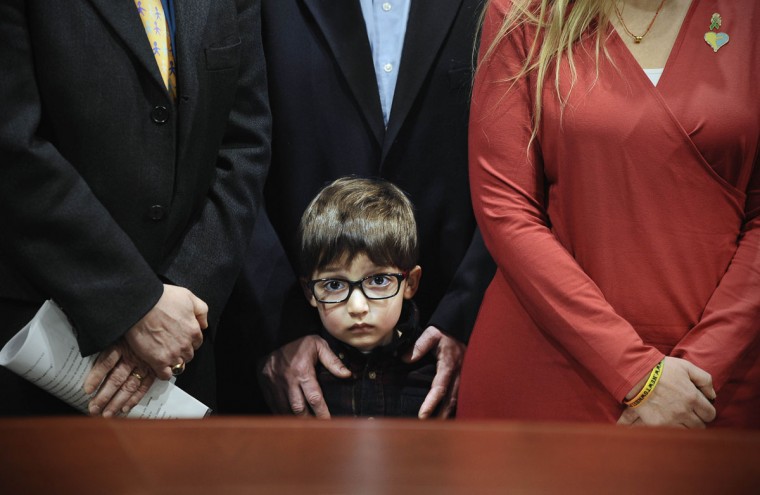 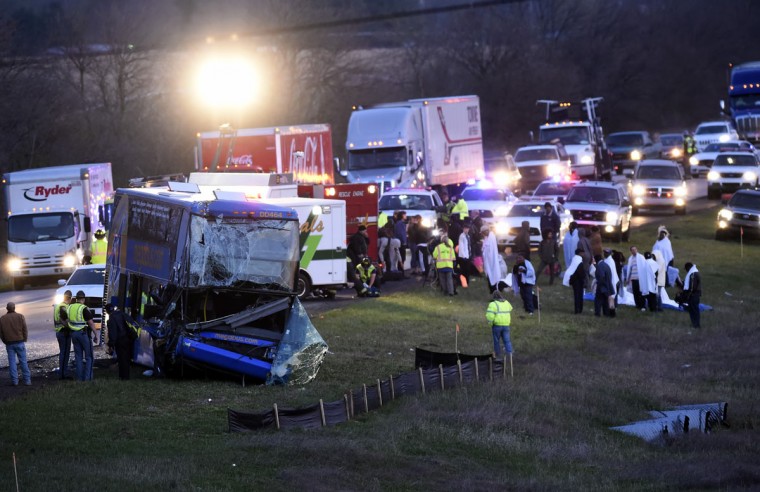 Authorities work the scene of a four-vehicle crash involving a Megabus on southbound Interstate 65 near Edinburgh, Ind., Monday, April 13, 2015. Nineteen passengers suffered non-life-threatening injuries Monday morning when the bus, heading from Chicago to Atlanta, struck the back of a stopped semitrailer on Interstate 65, Indiana State Police said. (Scott Roberson/The Daily Journal via AP) 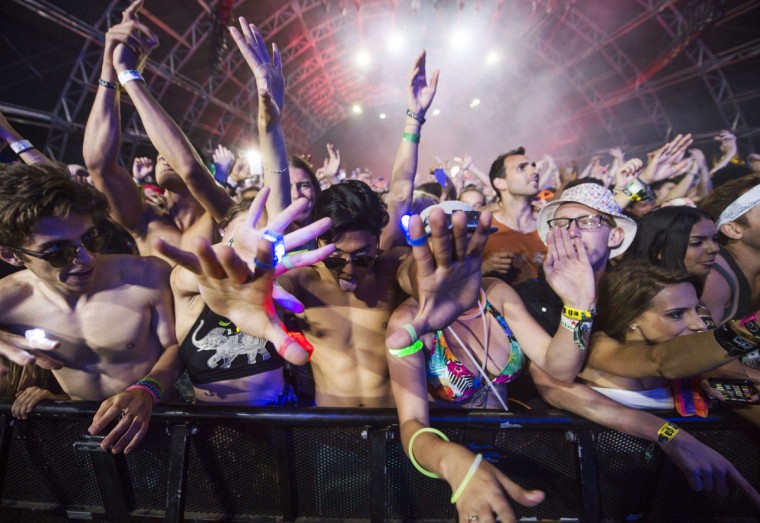 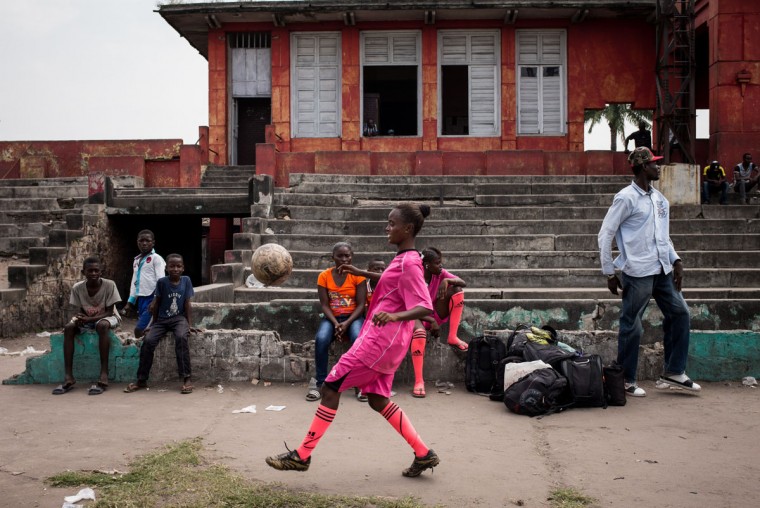 A player juggles before a match in Kinshasa on April 11, 2015. (AFP Photo/Federico Scoppa) 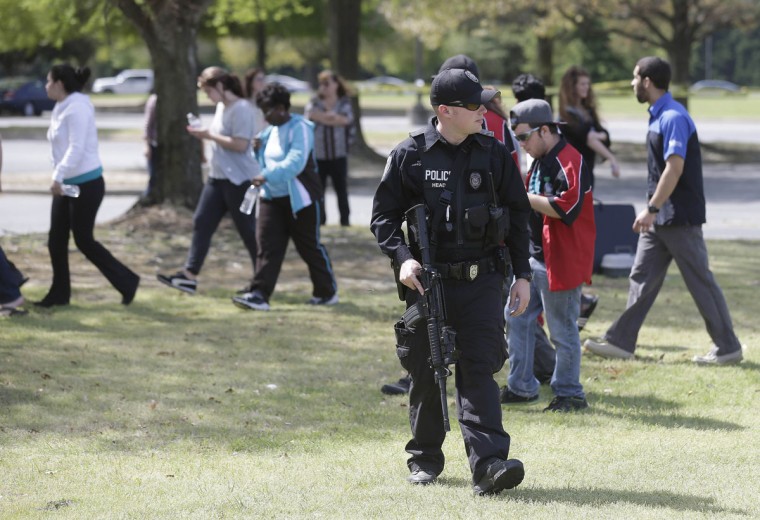 A police officer stands by as students and faculty are allowed to return following a lockdown at Wayne Community College, in Goldsboro, N.C., Monday, April 13, 2015. One person was killed in a shooting at the community college that was locked down as authorities searched for a gunman, officials said. (AP Photo/Gerry Broome) 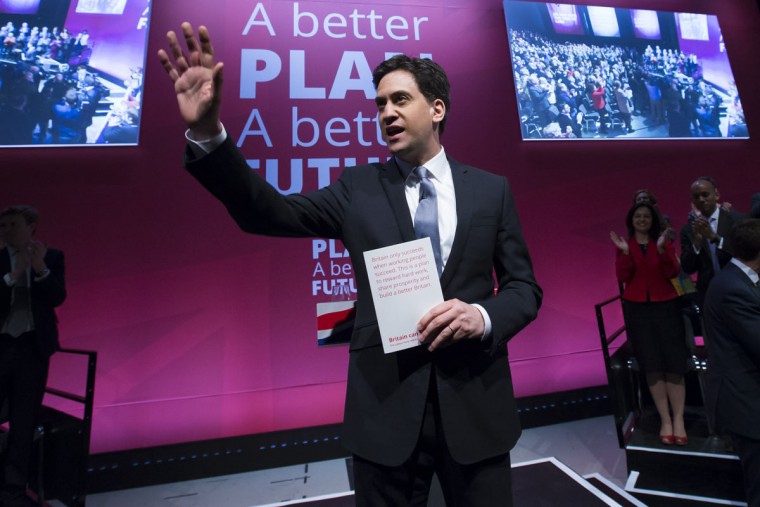 Labour Party Leader Ed Miliband waves as he arrives to speak at the launch of the party’s election manifesto in Manchester, England, Monday April 13, 2015. Britain goes to the polls in a General Election on May 7. (AP Photo/Jon Super) 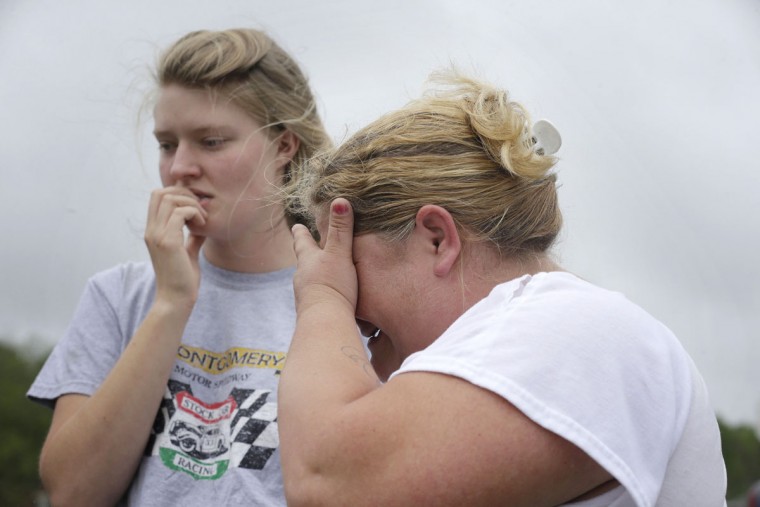 Kristie Brasher, right, cries next to a friend Monday, April 13, 2015, after a gunman entered a doctor’s office, shot a woman and fled to a nearby home in Jemison, Ala. (AP Photo/Brynn Anderson) 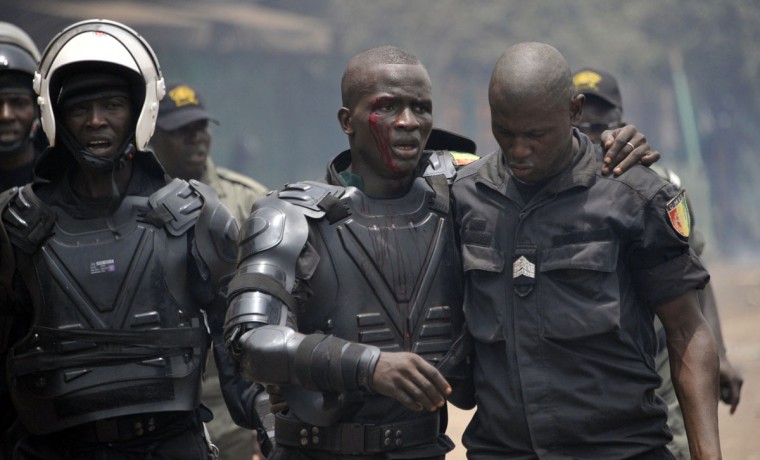 Blood runs down the face of an injured anti-riot police officer as he is assisted by a colleague during clashes with opposition protesters during a demonstration in Conakry on April 13, 2015. Several protesters were wounded on April 13 as Guinean police opened fire during violent demonstrations across the capital Conakry against the regime of President Alpha Conde. (AFP Photo/Cellou Binani) 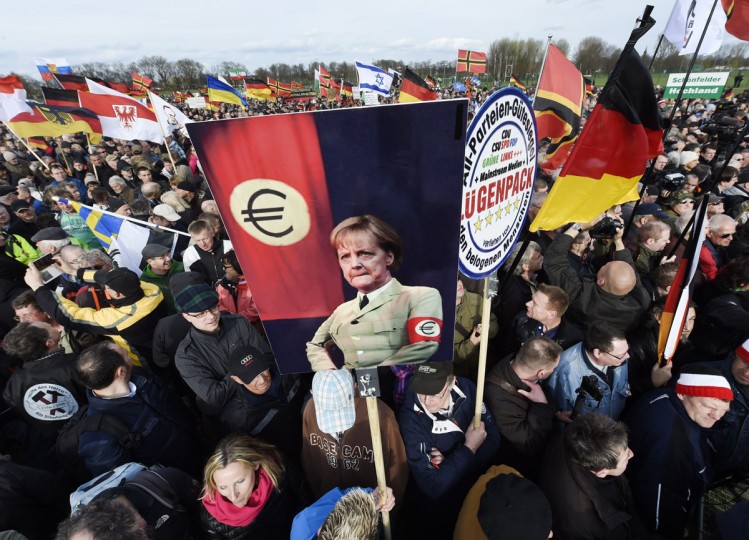 Demonstrators hold a poster depicting German Chancellor Angela Merkel in a jacket that resembles Third Reich uniforms with a Euro sign on the sleeve at a rally called ‘Patriotic Europeans against the Islamization of the West’ (PEGIDA) in Dresden, Germany, Monday, April 13, 2015. (AP Photo/Jens Meyer) 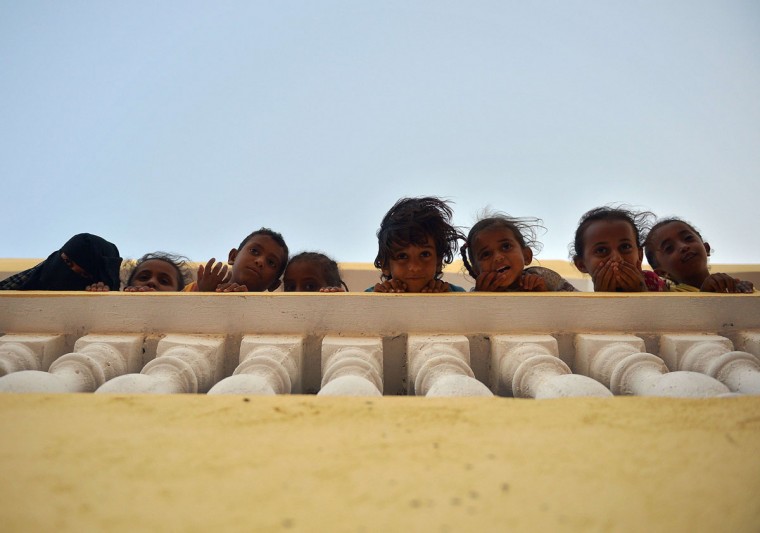 Yemeni refugee children stand on April 12, 2015 at a boarding fracility run by the UN High Commission for Refugees in Obock, a small port in Djibouti on the northern shore of the Gulf of Tadjoura, where it opens out into the Gulf of Aden. The UN said at least 900 people had arrived in the Horn of Africa in the past 10 days, including 344 Yemenis who sought refuge in Djibouti even as fresh Saudi-led air strikes pounded rebel positions across south Yemen on April 13. (AFP Photo/Tony Karumba) 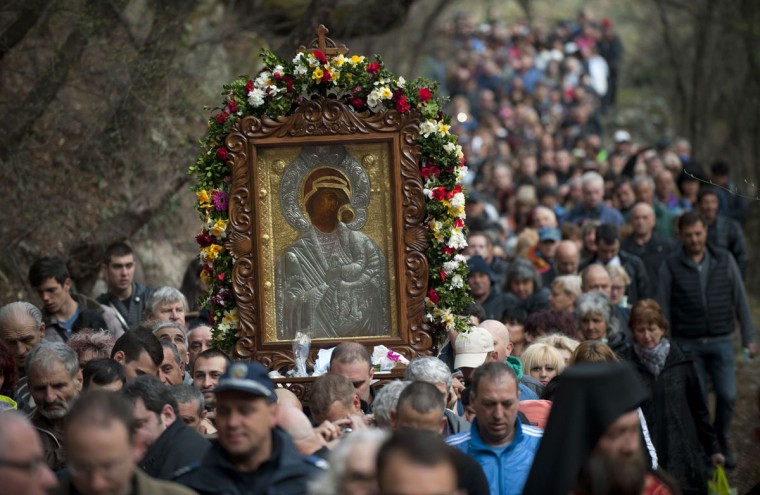 Bulgarian Orthodox pilgrims carry an icon of the Virgin Mary on April 13, 2015 during a annual religious procession, marking the second day of the Orthodox Easter, at the Bachkovo monastery. (AFP Photo/Nikolay Doychinov) 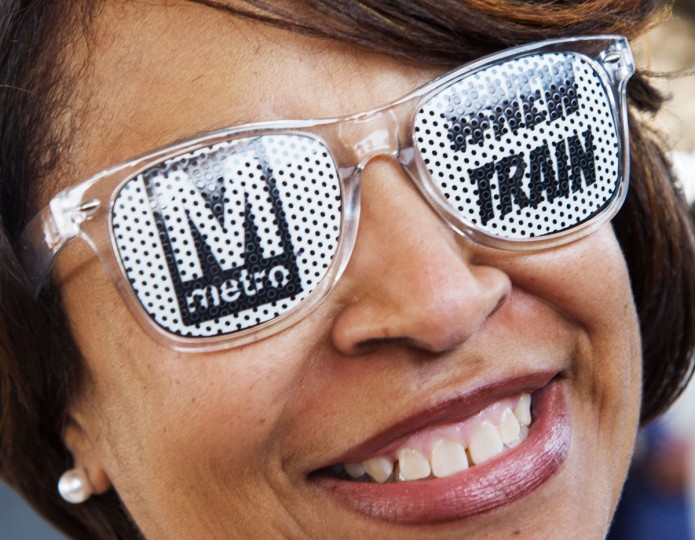 « The Songkran Festival: Celebrating the Thai New Year » Opening Day 2015: A look at each of the 30 MLB home openers