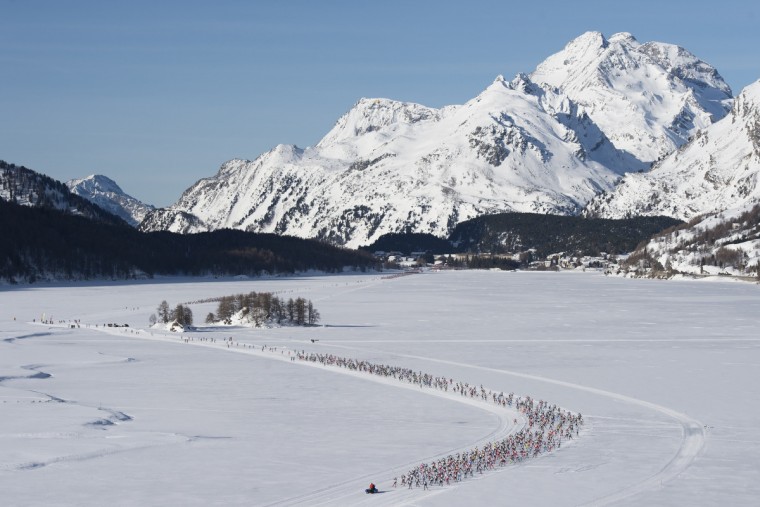 In this aerial view taken from a helicopter thousands of sportsmen and -women are on their way from Maloja to S-Chanf in south Eastern Switzerland as they participate in the annual Engadin skiing marathon in Sils, Switzerland, on Sunday, March 8, 2015. (AP Photo/Keystone,Gian Ehrenzeller) 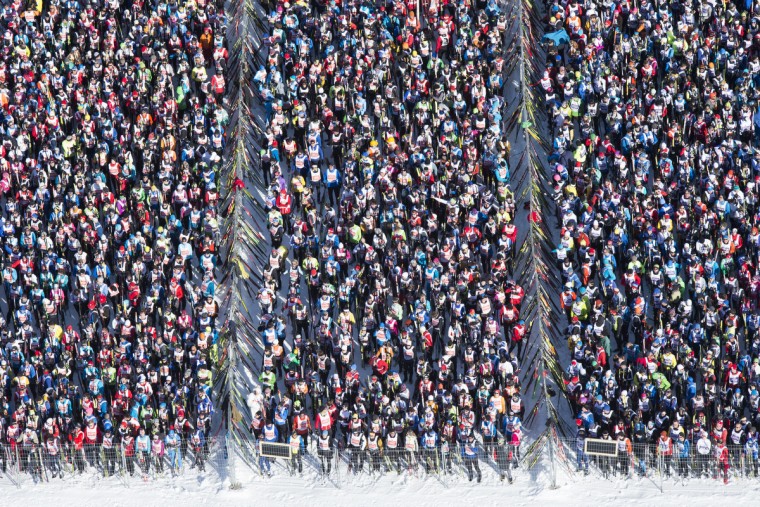 In this aerial view taken from a helicopter thousands of sportsmen and women await the start, in Maloja, of the annual Engadin skiing marathon on Sunday, March 8, 2015, from Maloja to S-Chanf in south Eastern Switzerland. (AP Photo/Keystone,Gian Ehrenzeller) 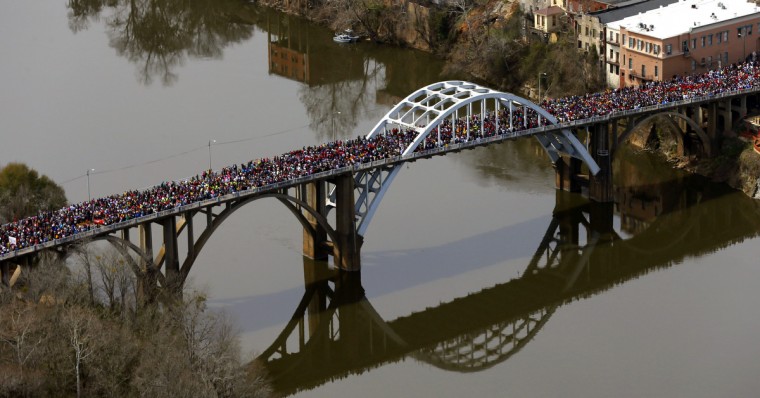 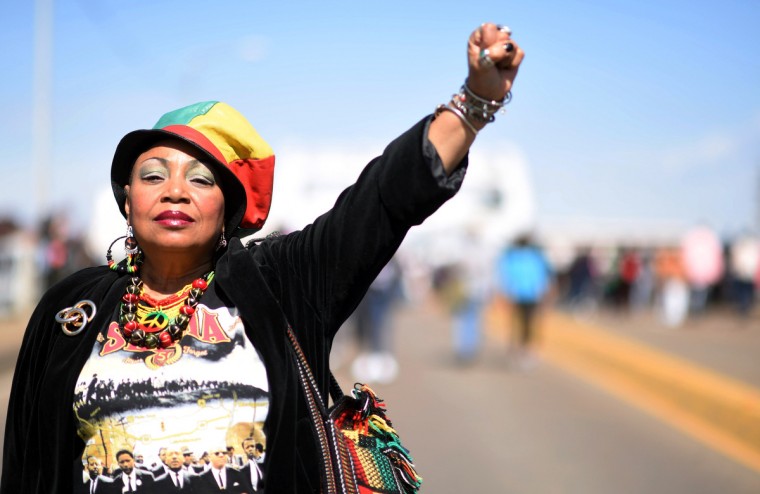 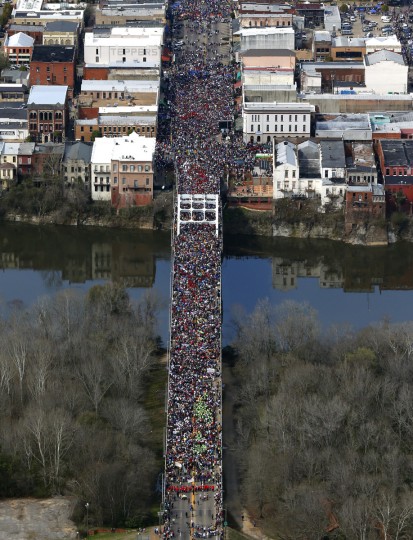 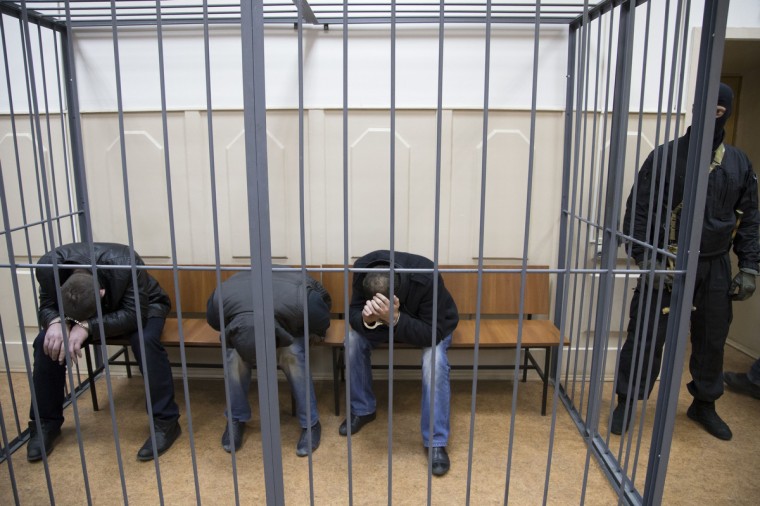 Three men, from the left: Tamerlan Eskerkhanov, Shagid Gubashev and Khamzad Bakhaev suspected of involvement in the killing of Boris Nemtsov sit in a court room in Moscow, Russia, Sunday, March 8, 2015. A Russian court on Sunday charged two men in the killing of leading opposition figure Boris Nemtsov and ordered three other suspects to remain in jail pending a decision on whether to file charges. (AP Photo/Ivan Sekretarev) 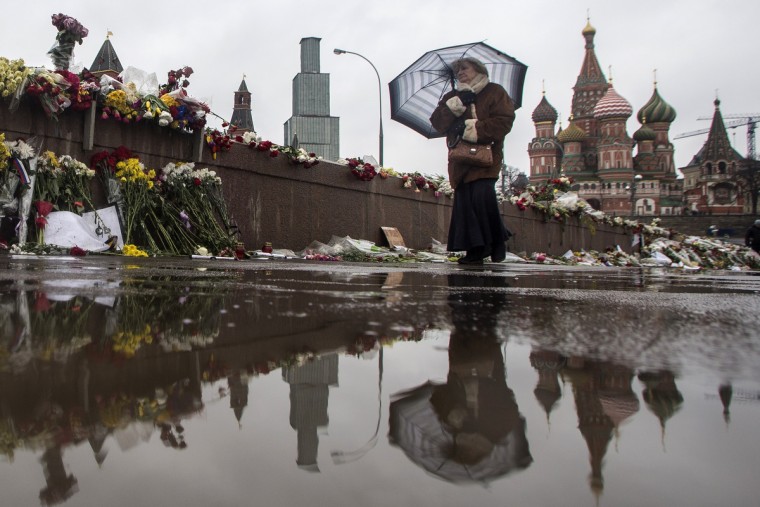 An elderly woman passes the place where Boris Nemtsov, a charismatic Russian opposition leader and sharp critic of President Vladimir Putin, was gunned down on Friday, Feb. 27, 2015 near the Kremlin, in Moscow, Russia, Sunday, March 8, 2015, with the Kremlin Wall and St. Basil’s Cathedral are on the background. Russian news agencies said Sunday one of the suspects in the killing of Nemtsov has admitted involvement in the crime. Judge Nataliya Mushnikova said that Zaur Dadaev made a statement confirming his guilt, according to the reports. They did not specify his alleged actions. Dadaev is among five suspects detained in the Feb. 27 killing, when Nemtsov was shot while walking on a bridge near the Kremlin. Another man, Anzor Gubashev, was charged in the killing, and a hearing for three other suspects was under way, court spokeswoman Anna Fadeeva said earlier Sunday. (AP Photo/Denis Tyrin) 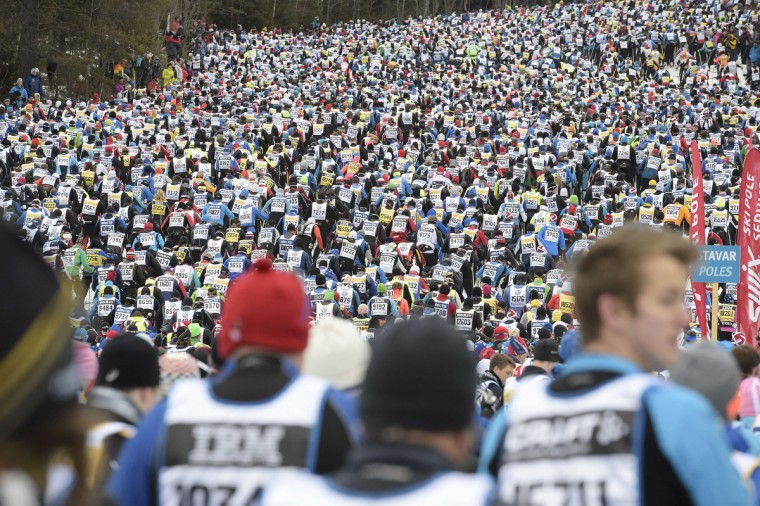 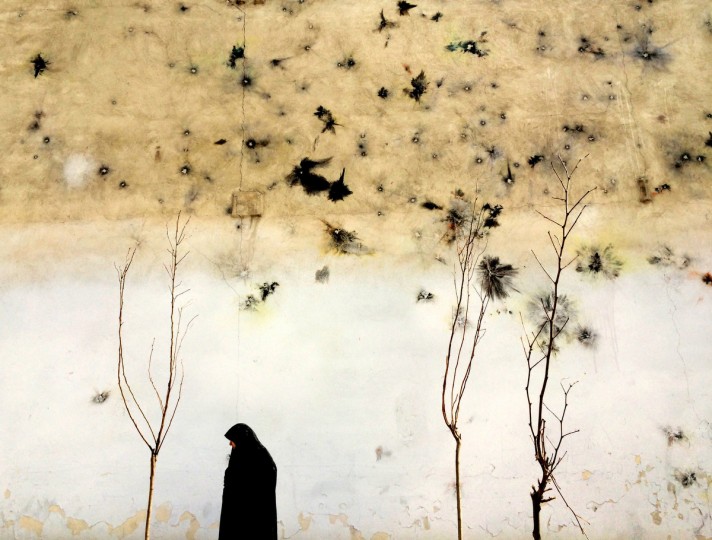 An Iranian woman walks past a wall in Tehran on March 8, 2015, bearing stains of exploded fire crackers from last years Fire feast, or Chaharshanbeh Soori, held annually on eve of the last Wednesday before the Persian new year of Noruz. Noruz is the new year according to the Persian solar calendar and is a Zoroastrian tradition, still celebrated by Iranians even after Islam. Noruz will be celebrated this year on 21st of March. (Behrouz Mehri/Getty Images) 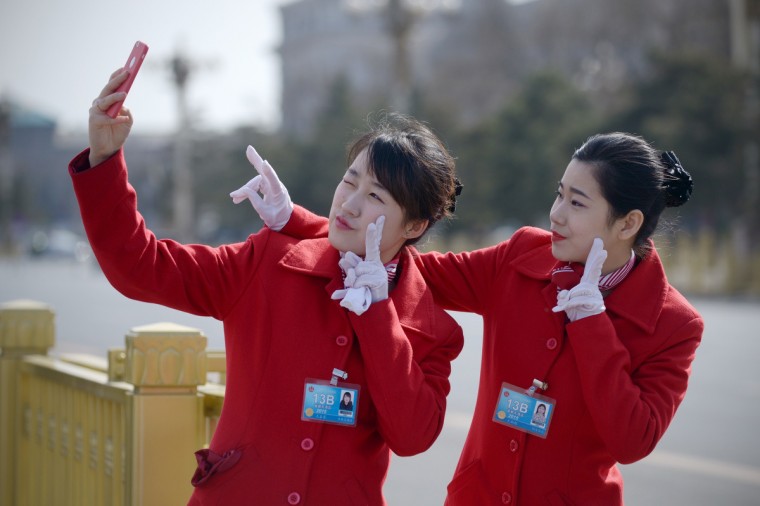 Chinese hostesses use a mobile phone to take a photo during the third session of the 12th National People’s Congress outside the Great Hall of the People in Beijing on March 8, 2015. China’s Communist Party-controlled legislature, the National People’s Congress (NPC), gathers in the capital for the annual show of political theater, with the “rule of law” high on the agenda. (Wang Zhao/Getty Images) 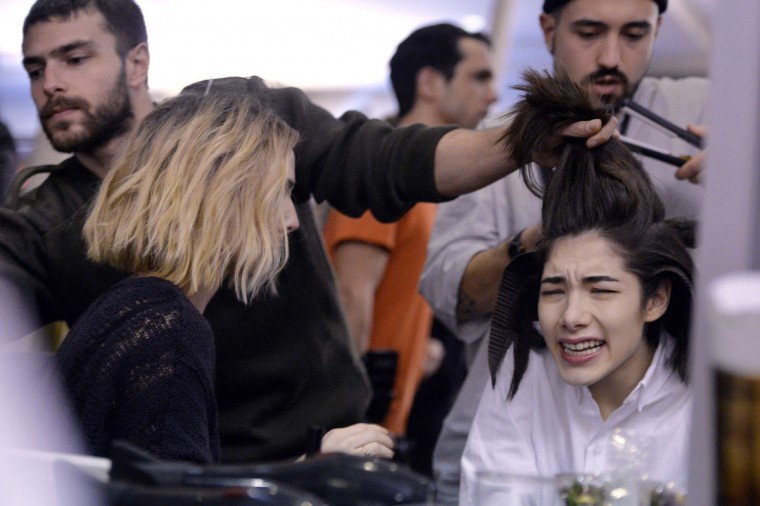 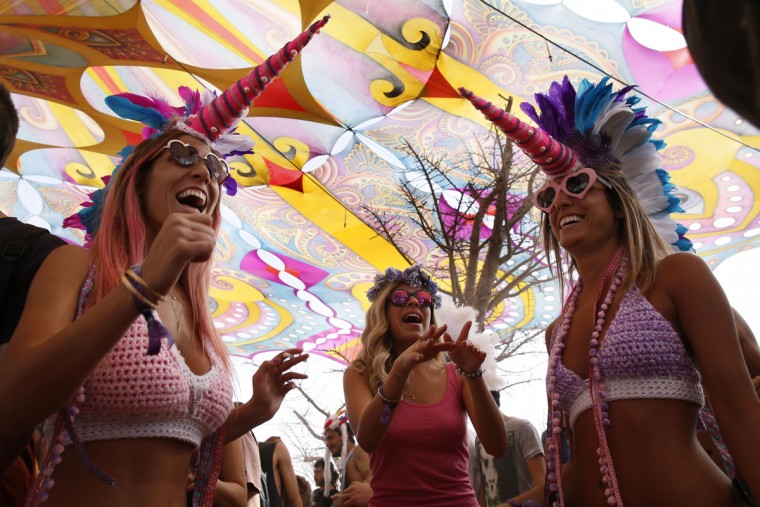 Israelis dressed in costumes dance in a desert rave during the feast of Purim in the Negev Desert in southern Israel. The carnival-like Purim holiday is celebrated with parades and costume parties to commemorate the deliverance of the Jewish people from a plot to exterminate them in the ancient Persian empire 2,500 years ago, as recorded in the Biblical Book of Esther. (Gali Tibbon/Getty Images) 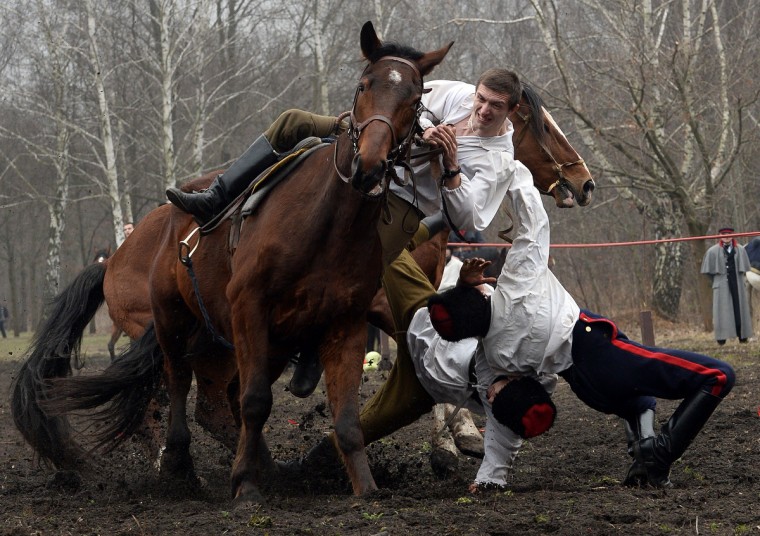 Reconstruction of the battle at Grochow district of Warsaw on February 25,1831 between the Polish Army of 40,000 and army of Russian Empire of 69,000 in Warsaw. November Insurrection, (183031) was the Polish rebellion that unsuccessfully tried to overthrow Russian rule in the Congress Kingdom of Poland as well as in the Polish provinces of western Russia and parts of Lithuania, Belorussia and Ukraine. (Janek Skarzynski/Getty Images) 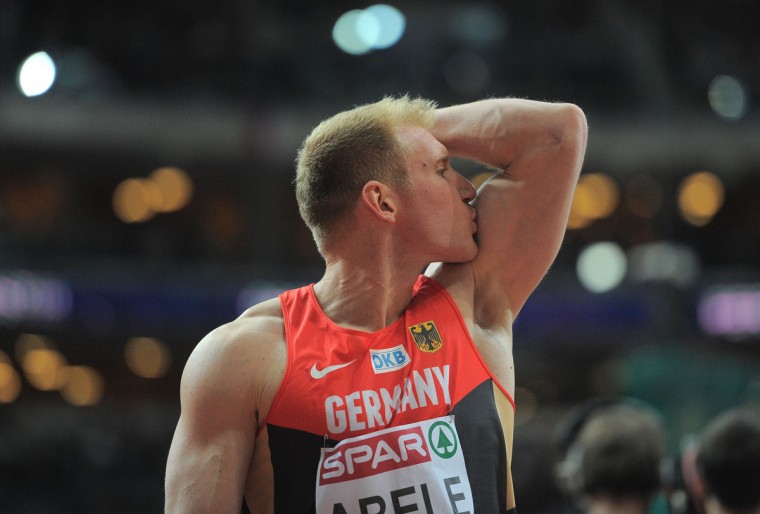 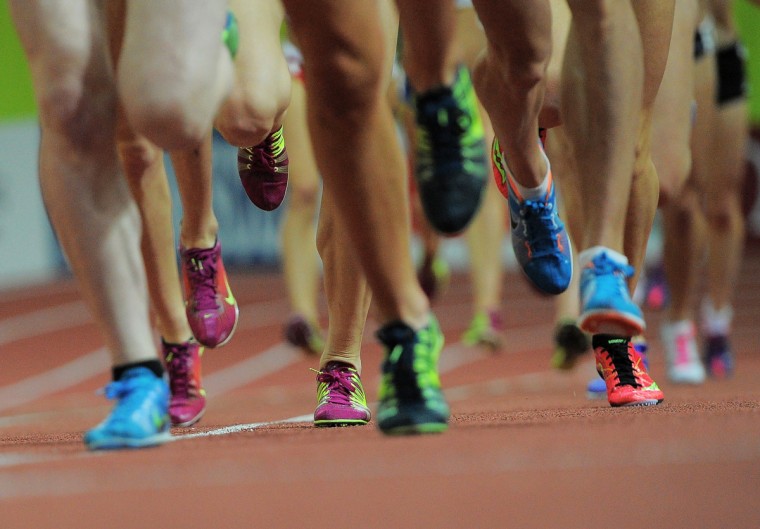 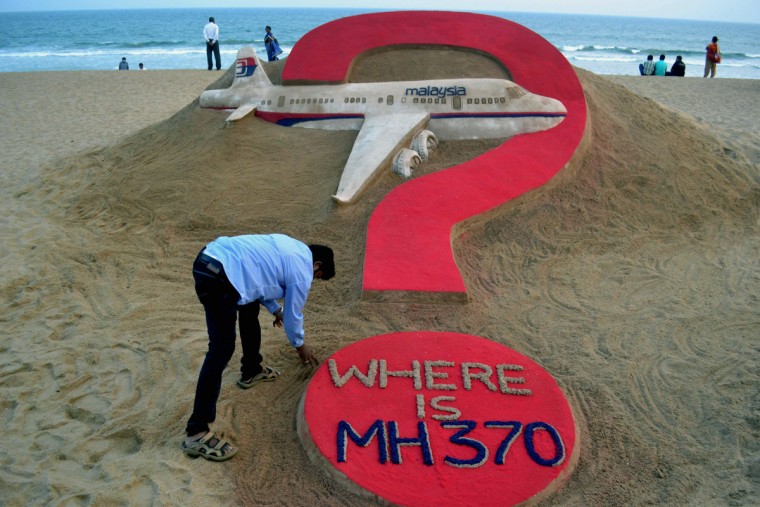 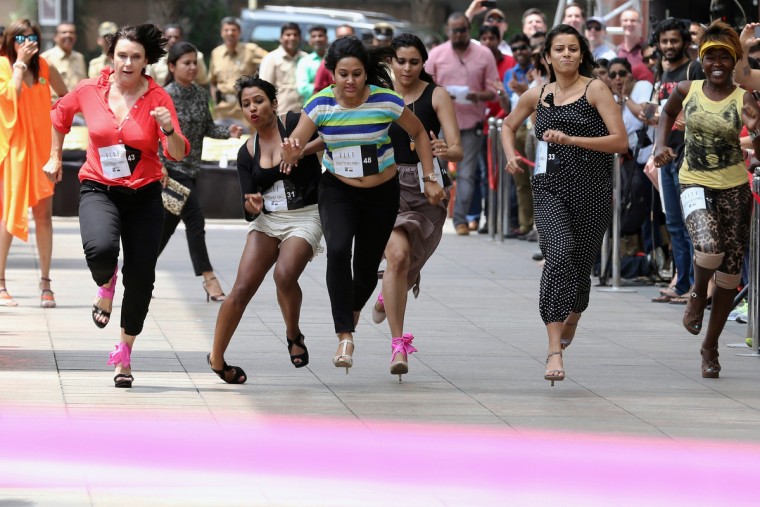 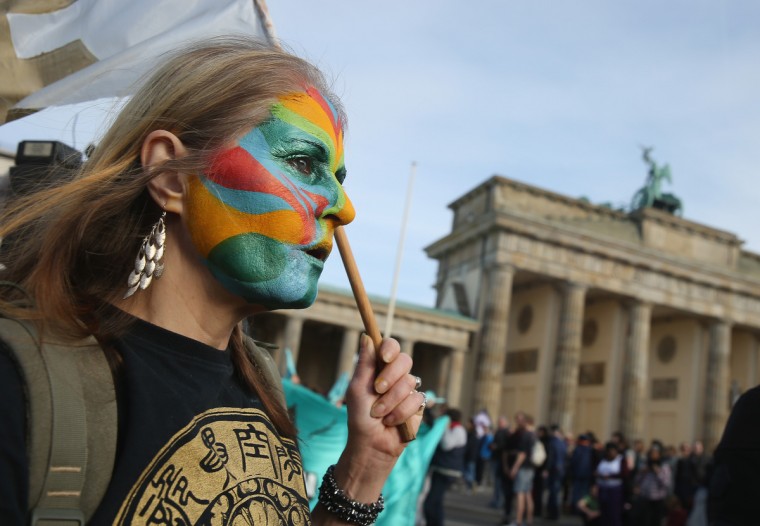 People, including one woman who has painted her face in what she described as a “warrior’s mask”, march past the Brandenburg Gate while protesting in favour of women’s rights on International Women’s Day on March 8, 2015 in Berlin, Germany. The march comes on the heels of a new law passed by the Bundestag that will require Germany’s 100 biggest companies to have a quota of at least 30% women on their governing boards. (Sean Gallup/Getty Images) 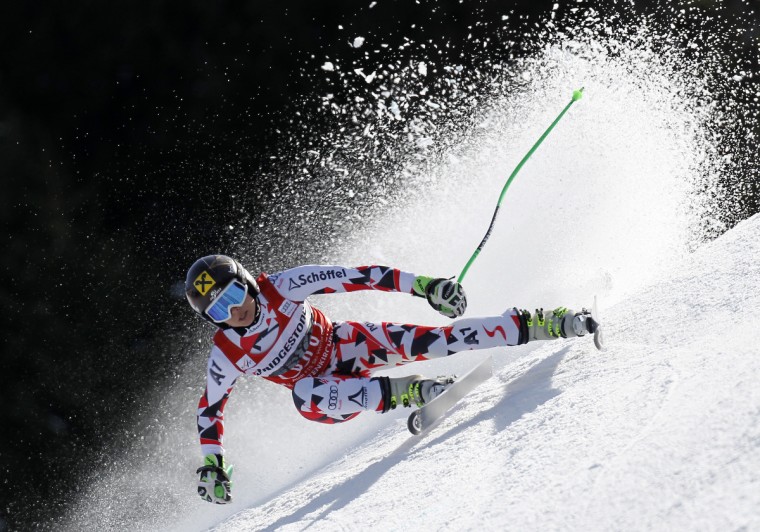 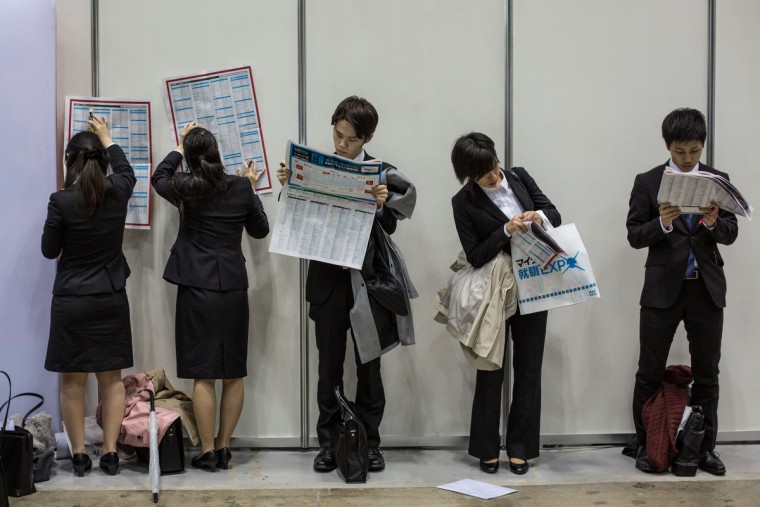 College students read the expo information brochure and choose which companies information sessions they want to attend at the Mynavi Shushoku MEGA EXPO at the Tokyo Big Sight on March 8, 2015 in Tokyo, Japan. 70,000 job-seeking students are expected to attend the two-day career fair with 1229 companies participating. Under new rules starting this academic year, companies are allowed to conduct recruiting activities from March 1 onward, rather than December so that third-year university students can concentrate on their studies. (Chris McGrath/Getty Images) 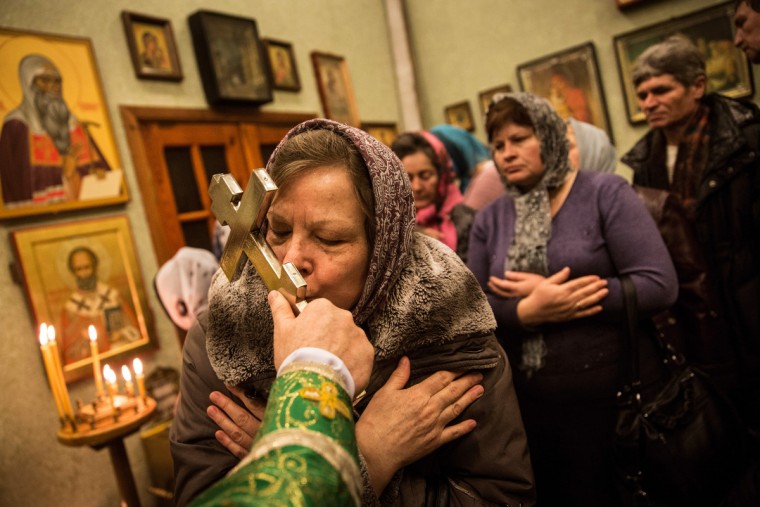 Congregants kiss a cross, held by Father Alexandr Matveev, at the end of a church service in the office space of Saint Johan Krondshtadsky Church on March 8, 2015 in the Petrovskiy district of Donetsk, Ukraine. The main hall of the Russian Orthodox church was destroyed by shelling in the summer of 2014, forcing the congregation to meet in the office space of the church since then. (Andrew Burton/Getty Images) 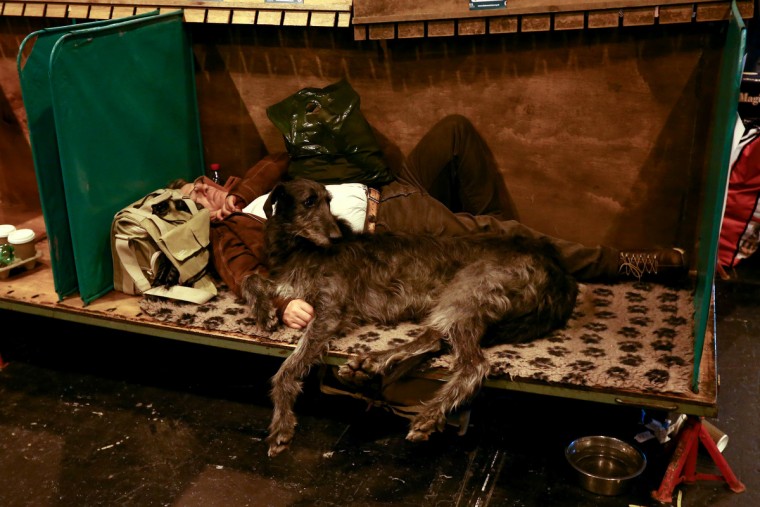 A Deerhound rests with its sleeping owner on the third day of Crufts dog show at the National Exhibition Centre on March 7, 2015 in Birmingham, England. First held in 1891, Crufts is said to be the largest show of its kind in the world, the annual four-day event, features thousands of dogs, with competitors travelling from countries across the globe to take part and vie for the coveted title of ‘Best in Show’. (Carl Court/Getty Images)