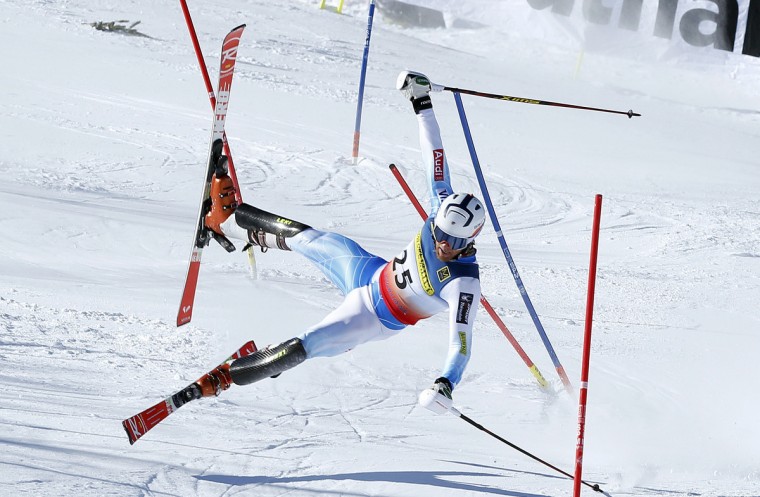 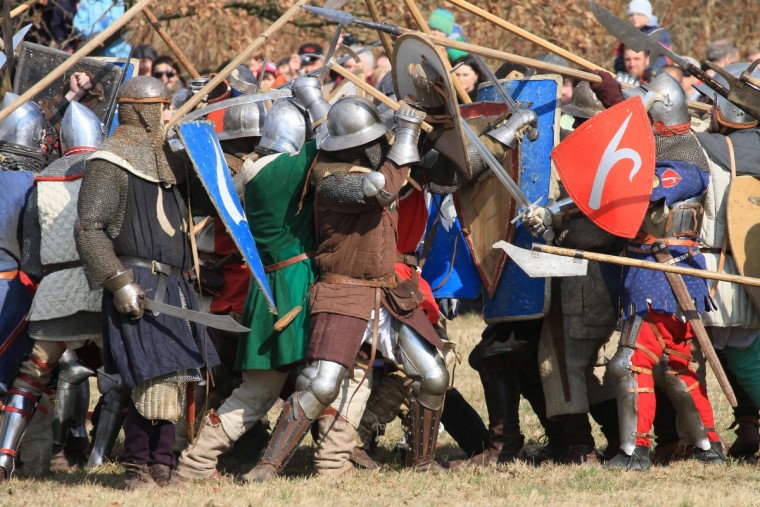 People take part in a reenactment of the Battle of Sudomer, near Pisek, Czech Republic. The Battle of Sudomer was fought on March 25, 1420, between Catholic and Hussite forces that were led by Jan Zizka who followed Christian reformer John Huss. The battle is reenacted on the occasion of 600th anniversary of church reformer John Huss’s burning at stake. (Radek Mica/Getty Images) 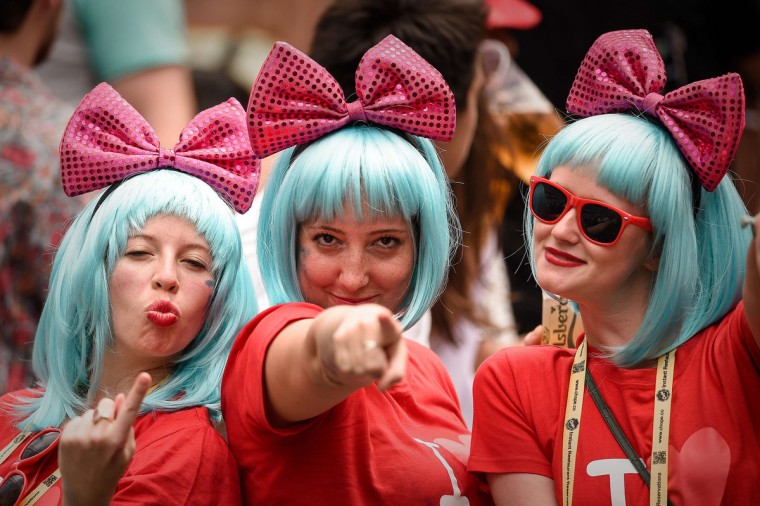 Rugby fans are seen during the third and final day of the rugby sevens tournament in Hong Kong. (Philippe Lopez/Getty Images) 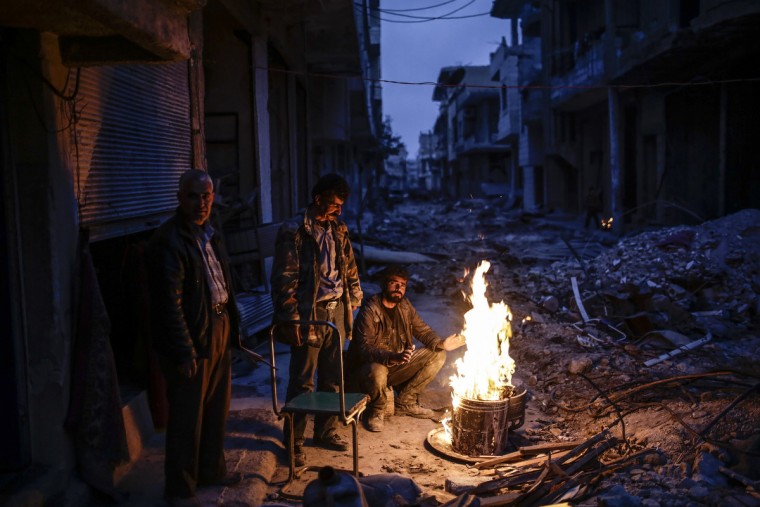 Kurdish men gather around a bonfire in the Syrian town of Kobane, also known as Ain al-Arab. Islamic State (IS) fighters were driven out of Kobane on January 26 by Kurdish and allied forces. (Yasin Akgul/Getty Images) 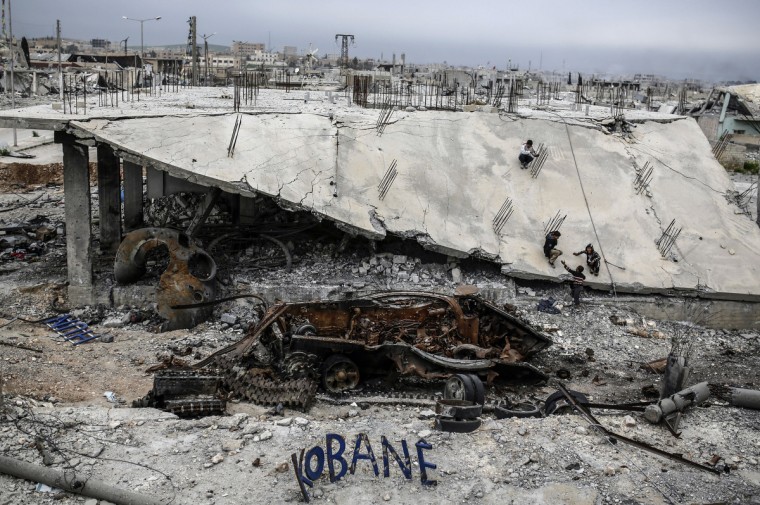 Young boys play on a destroyed building near a sign reading “Kobane” in the Syrian town of Kobane, also known as Ain al-Arab. Islamic State (IS) fighters were driven out of Kobane on January 26 by Kurdish and allied forces. (Yasin Akgul/Getty Images) 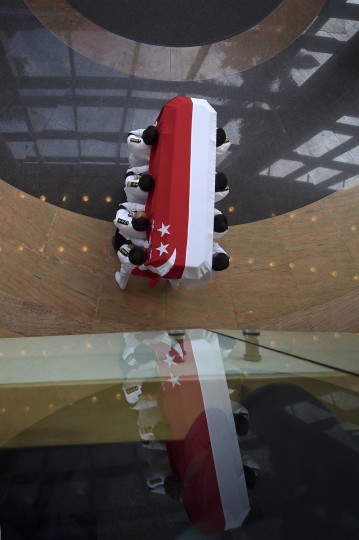 The coffin leaves at the state funeral for the late Lee Kuan Yew, at the University Cultural Center, Sunday, March 29, 2015 in Singapore. During a week of national mourning that began Monday after Lee’s death at age 91, some 450,000 people queued for hours for a glimpse of Lee’s coffin at Parliament House. A million people visited tribute sites at community centers across the island and leaders and dignitaries from more than two dozen countries attended the state funeral. (AP Photo/Joseph Nair) 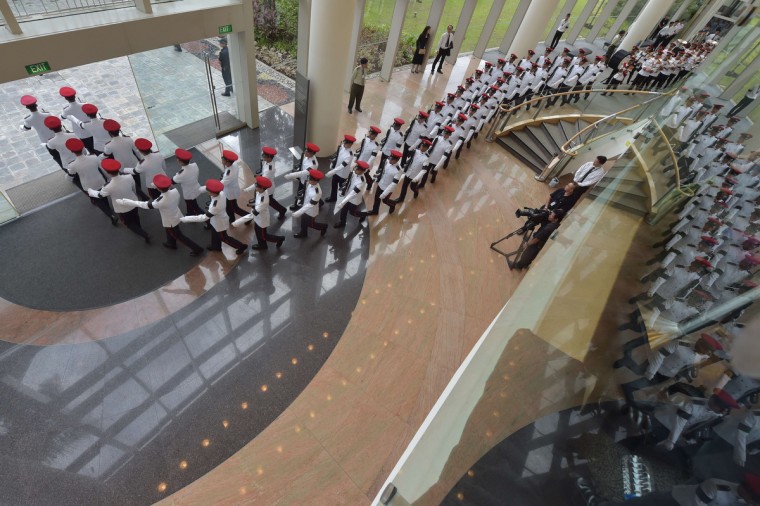 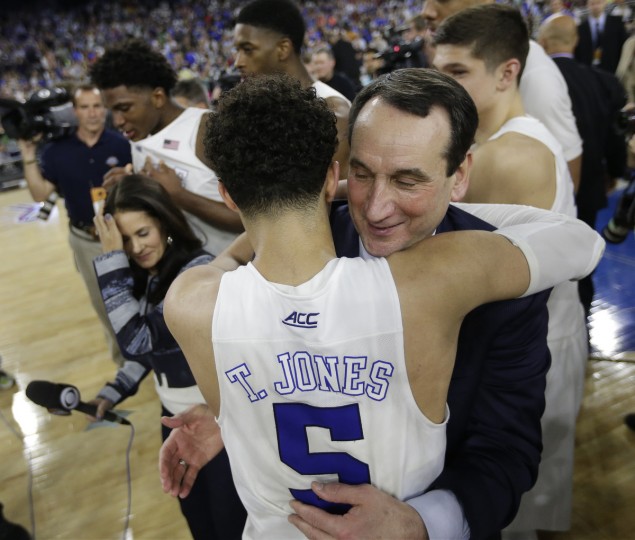 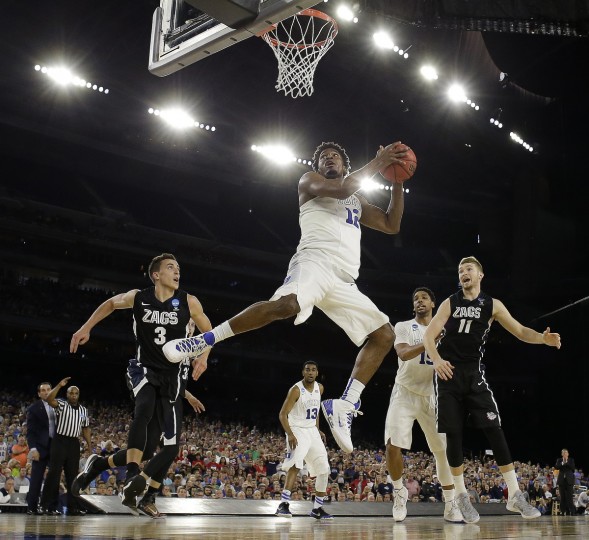 Duke’s Justise Winslow (12) goes up for a shot as Gonzaga guard Kyle Dranginis (3) looks on during the second half of a college basketball regional final game in the NCAA Tournament Sunday, March 29, 2015, in Houston. (AP Photo/Charlie Riedel) 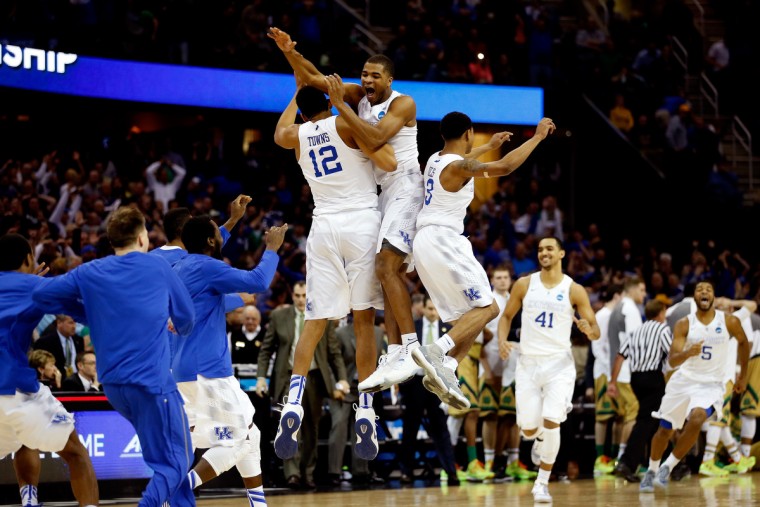 Aaron Harrison #2 of the Kentucky Wildcats celebrates with teammates after defeating the Notre Dame Fighting Irish during the Midwest Regional Final of the 2015 NCAA Men’s Basketball tournament at Quicken Loans Arena on March 28, 2015 in Cleveland, Ohio. (Gregory Shamus/Getty Images) 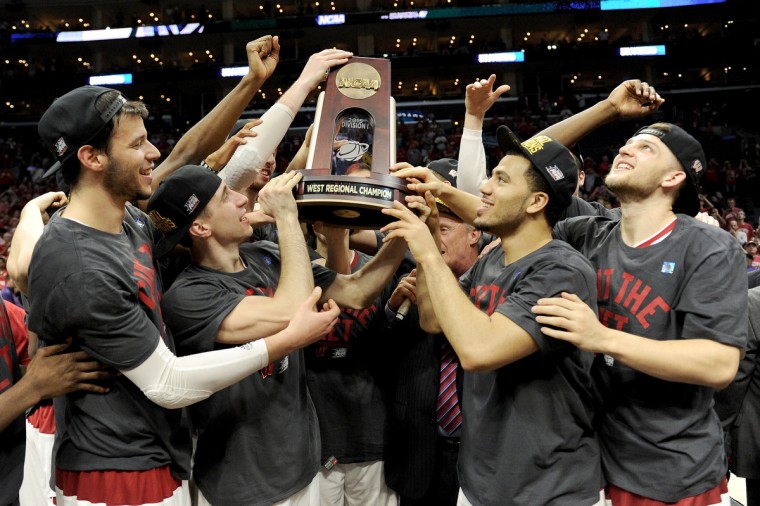 The Wisconsin Badgers celebrate after their 85-78 victory against the Arizona Wildcats during the West Regional Final of the 2015 NCAA Men’s Basketball Tournament at Staples Center on March 28, 2015 in Los Angeles, California. (Harry How/Getty Images) 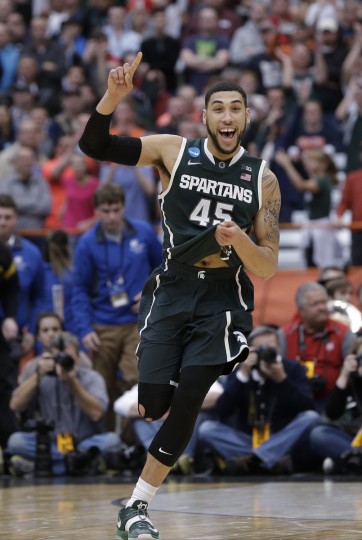 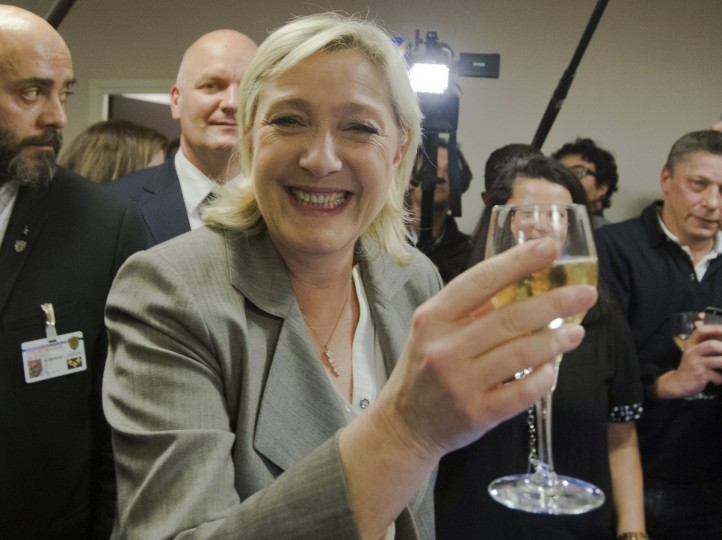 French far-right National Front Party leader, Marine Le Pen smiles after a news conference at party headquarters, Sunday, March 29, 2015, in Nanterre, western Paris, France. French voters are choosing members of local councils in run off elections Sunday seen as a test for the far right National Front, which is expanding its presence in French politics. The mainstream conservative UMP party came out ahead in the first round, ahead of the National Front and the governing Socialists. (AP Photo/Jacques Brinon) 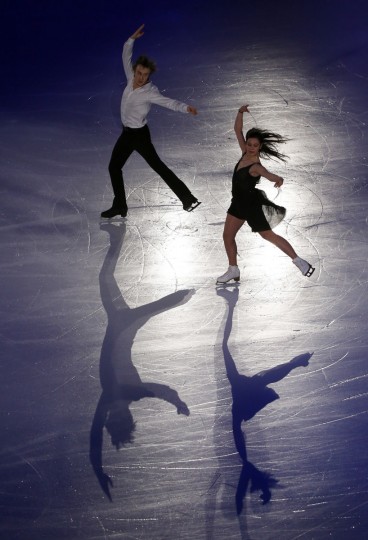 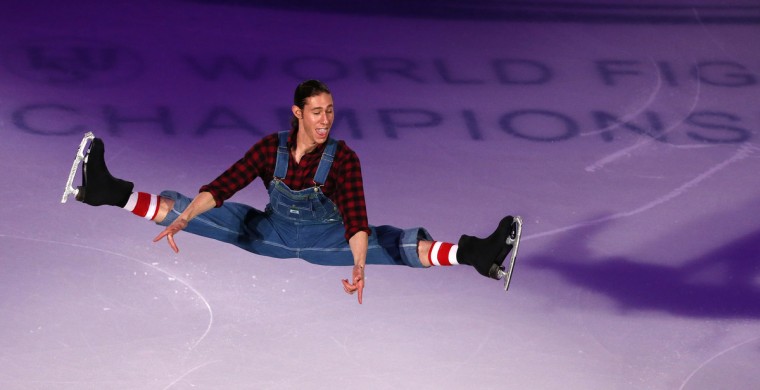 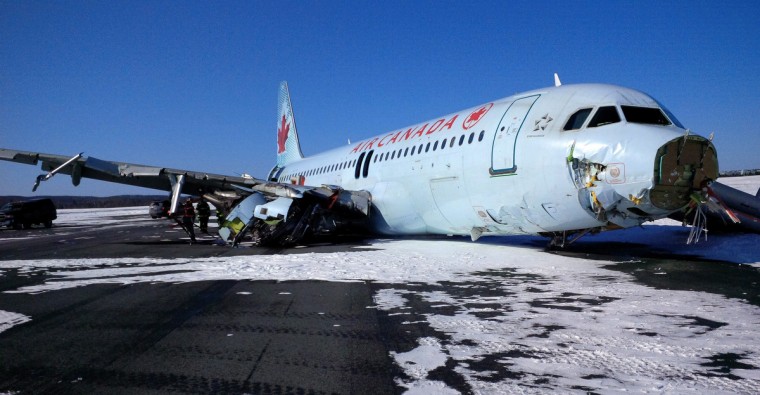 This photo provided by the Transportation Safety Board of Canada shows a Air Canada Airbus A-320 at Halifax International Airport after making an “abrupt” landing and skidding off the runway in bad weather early Sunday, March 29, 2015. Officials said 23 people were taken to a hospital for observation and treatment of minor injuries, none of which were considered life threatening. (AP Photo/The Transportation Safety Board of Canada) 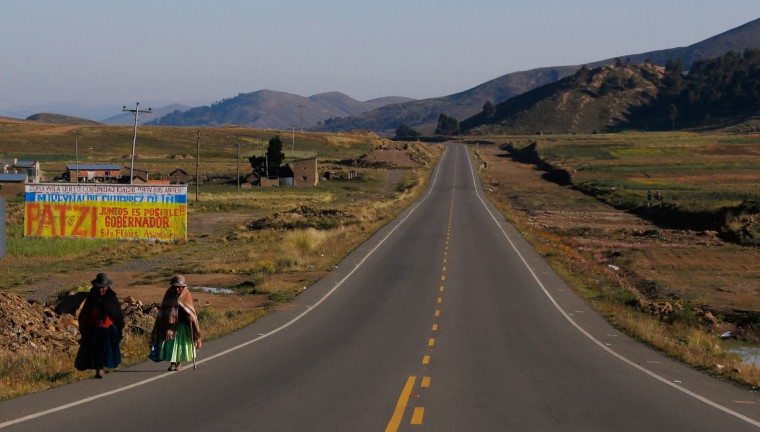 Aymara women walk to a polling station during regional elections in Batallas, Bolivia, Sunday, March 29, 2015. The political hegemony of Bolivia’s ruling party is being put to the test Sunday as Bolivians head to the polls to vote in regional elections that will include electing governors, mayors and legislators. (AP Photo/Juan Karita) 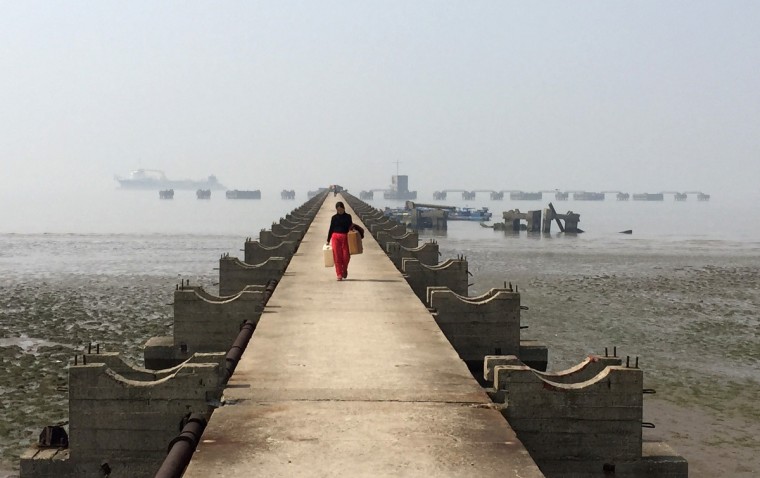 A woman walks on a old sea bridge on Hengshaxiang island near Shanghai. (Johannes Eisele/Getty Images) 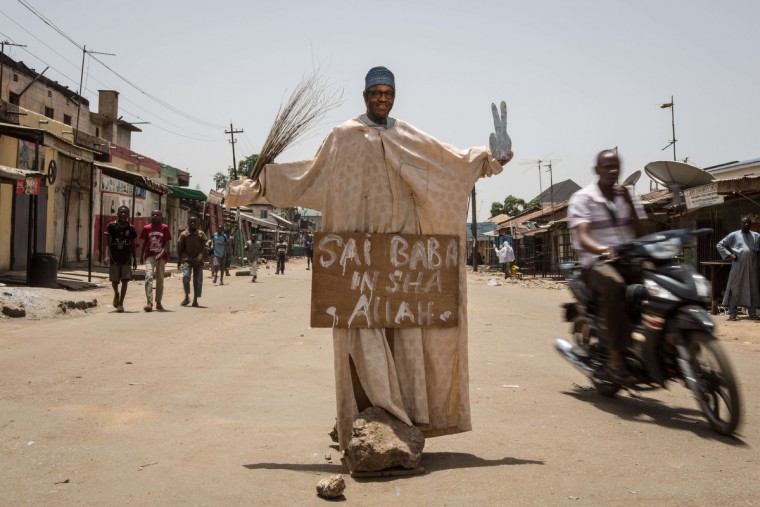 A makeshift figure of former military ruler and presidential candidate Muhammadu Buhari stands in an intersection in Kaduna on March 29, 2015. Kaduna, which had been hit hard by interreligious violence during the 2011 election, is awaiting results of the 2015 poll. (Nichole Sobecki/Getty Images) 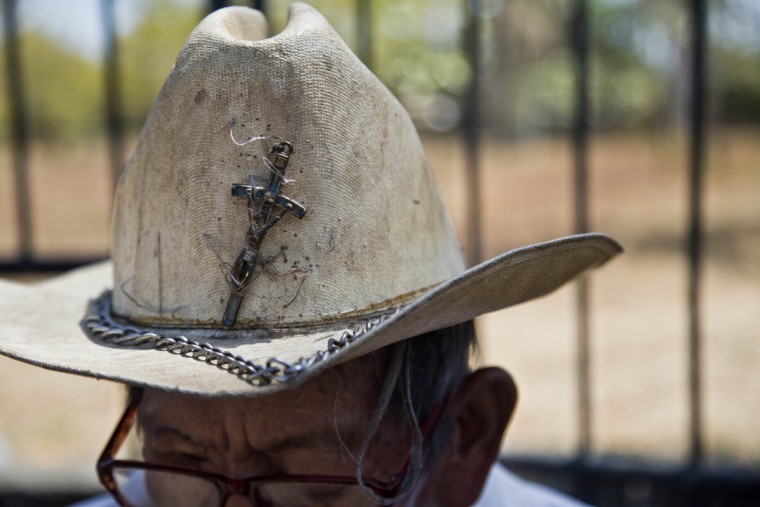 A homeless man begging for alms, sits outside the Metropolitan Cathedral during a religious procession observing Palm Sunday, in Managua, Nicaragua, Sunday, March 29, 2015. For Christians, Palm Sunday marks Jesus Christ’s entrance into Jerusalem, when his followers laid palm branches in his path, prior to his crucifixion. (AP Photo/Esteban Felix) 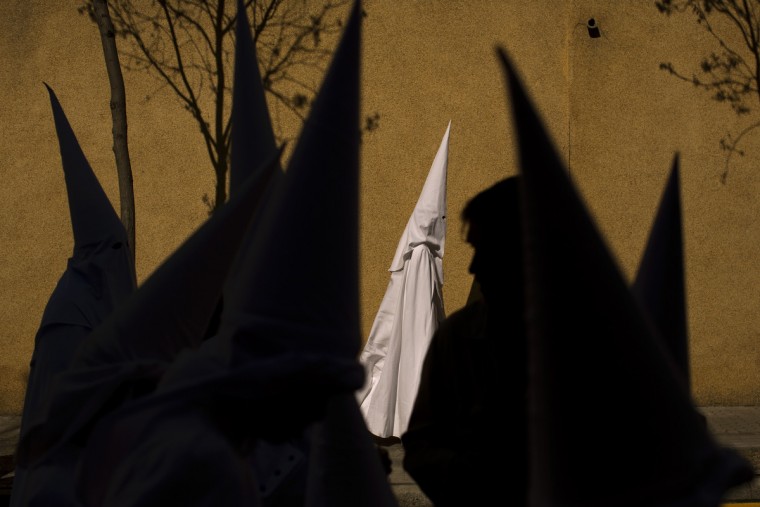 Hooded penitents from the La Paz brotherhood walk to the church to take part in a procession in Seville, Spain, Sunday, March 29, 2015. Hundreds of processions take place throughout Spain during the Easter Holy Week. (AP Photo/Emilio Morenatti) 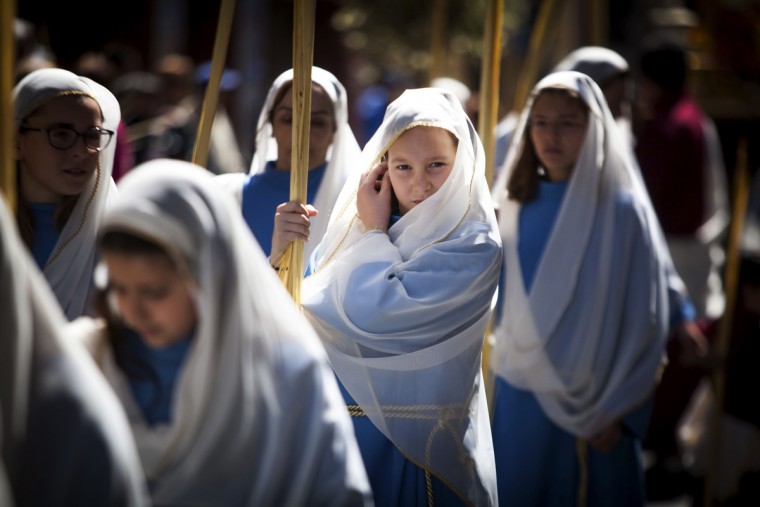 Girls hold palm leaves blessed during the morning Mass at the Cathedral of San Cristobal de La Laguna during a procession commemorating the arrival of Jesus in Jerusalem, on the Spanish Canary island of Tenerife. Palm Sunday held annually on the Sunday before easter and commemorates the entry into Jerusalem of Jesus Christ. (Desiree Martin/Getty Images) 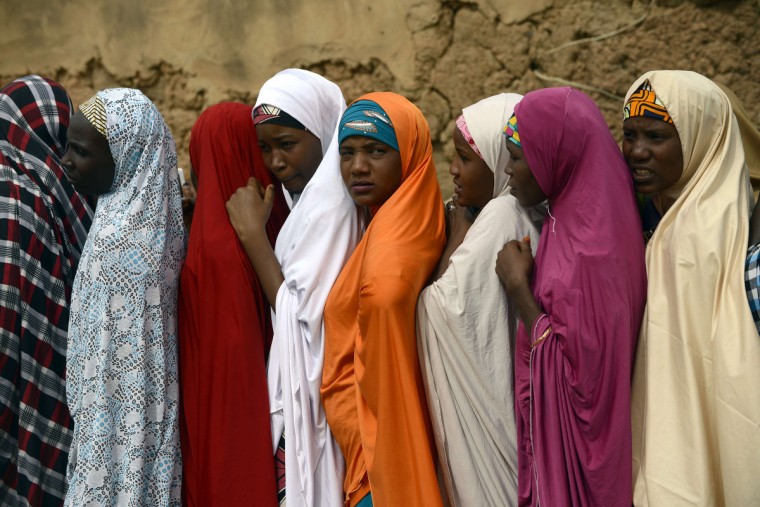 Women in khimars wait in line to cast their votes at a polling staion in Daura, Katsina State, during presidential elections. Voting in Nigeria’s general election has been extended to March 29 in 300 out of 150,000 polling stations, the electoral commission said, after technical glitches marred polling nationwide. (Pius Utomi Ekpei/Getty Images) 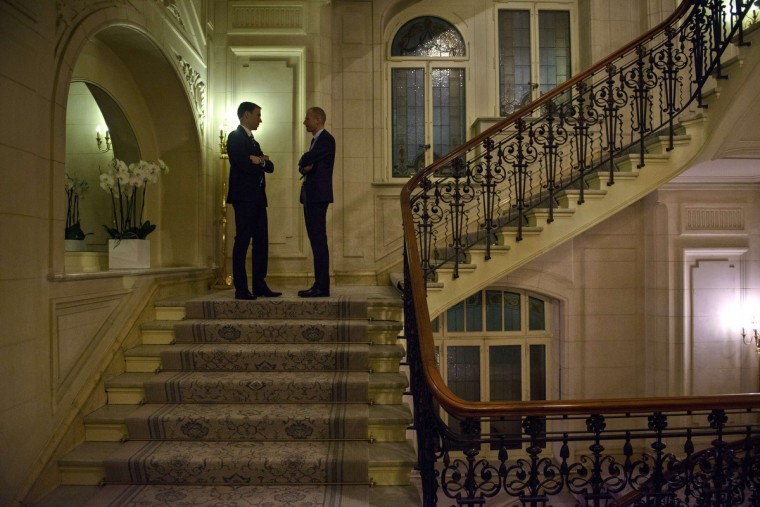 Security block a staircase at the Beau Rivage Palace Hotel in Lausanne, Switzerland, during Iran nuclear talks. Tortuous negotiations aimed at ending fears that Iran will acquire nuclear arms shifted into top gear, with the Iranian foreign minister saying he was confident the outstanding hurdles blocking a deal could be overcome. (Brendan Smialowski/Getty Images)

« Palm Sunday around the world » The disappearing art of Duckpin Bowling